This isn't a final version, there's a LOT of work that goes into proper fit and finish and I didn't want to wait yet another week to list the run. It's all working great so no reason to hold it longer.

Did a quick intro vid last night, it's a bit rough but it was 32c in my garage at 10PM after 7 days of ~40c weather, I'm barely holding it together. WTF planet? What did we ever do to you?


Here's a quick pic of the final, I'll do all angles later today: 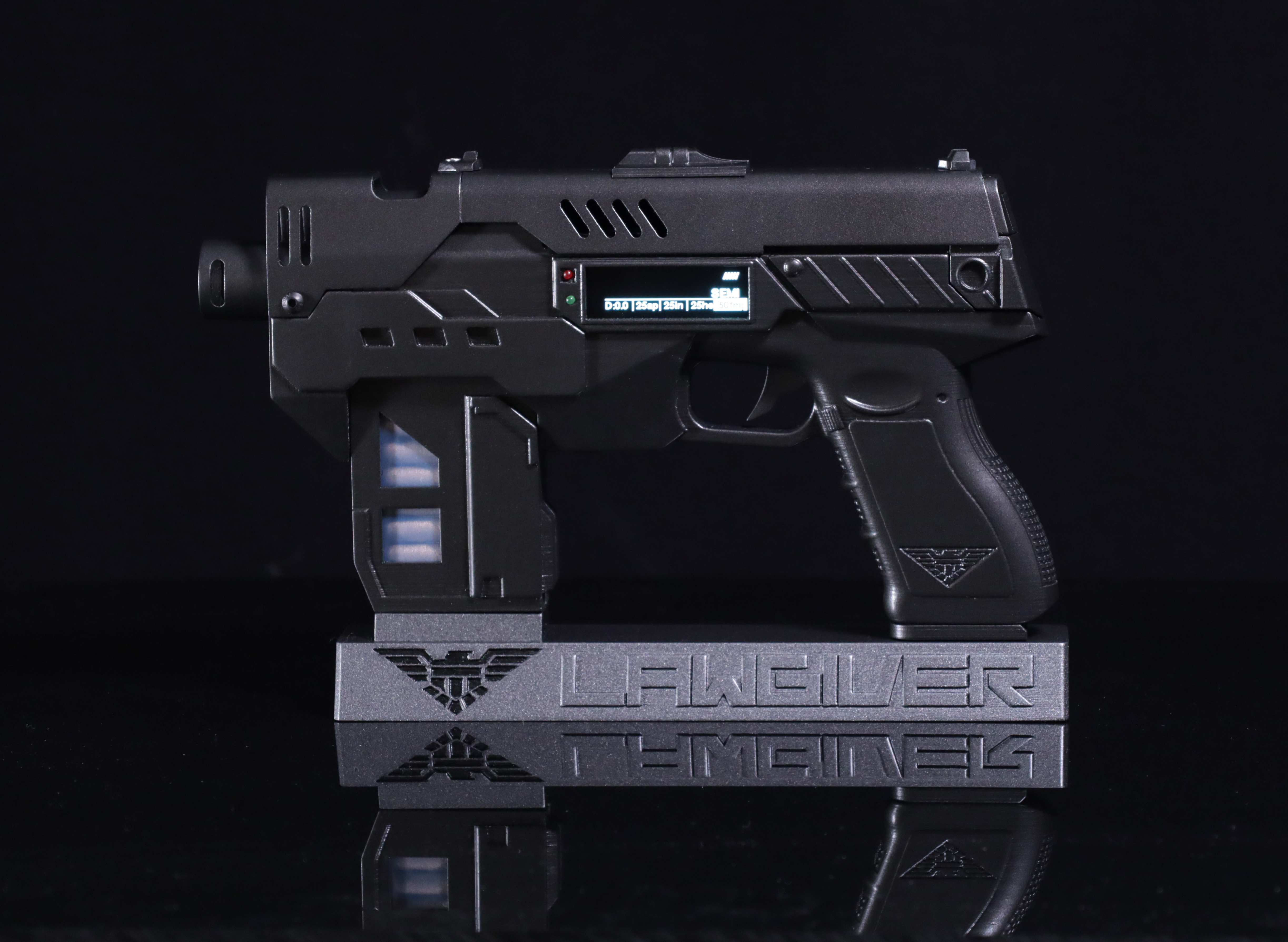 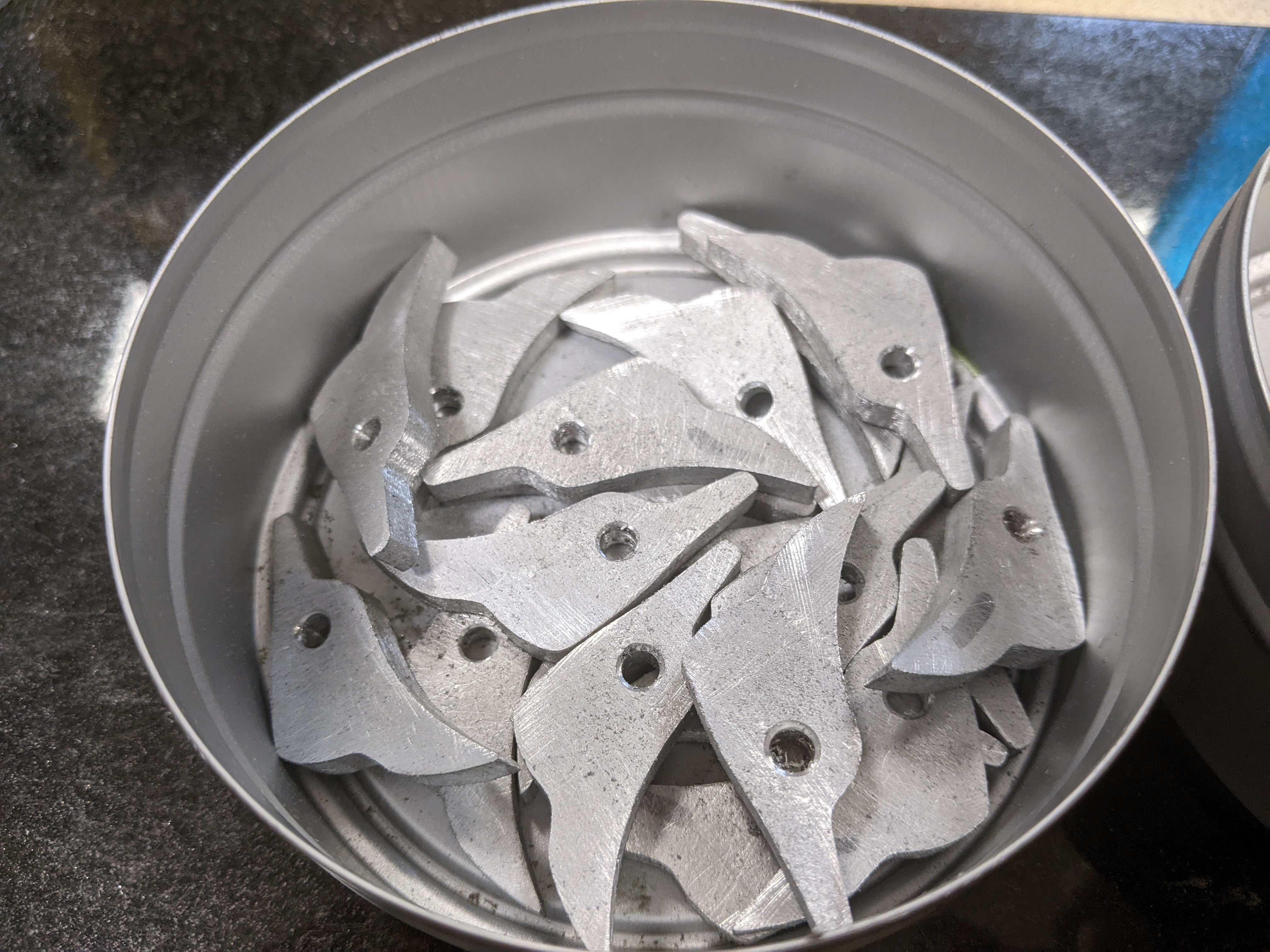 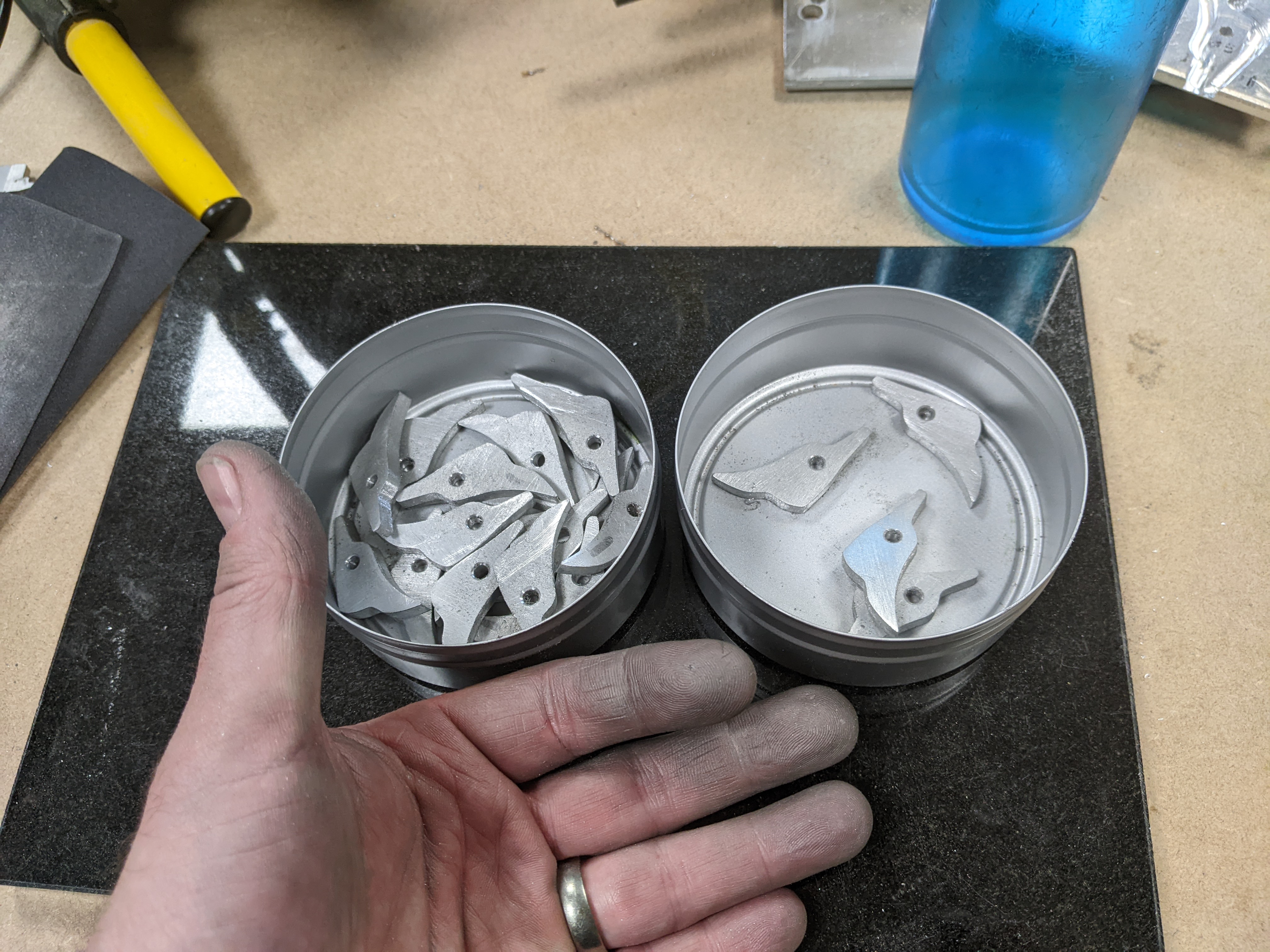 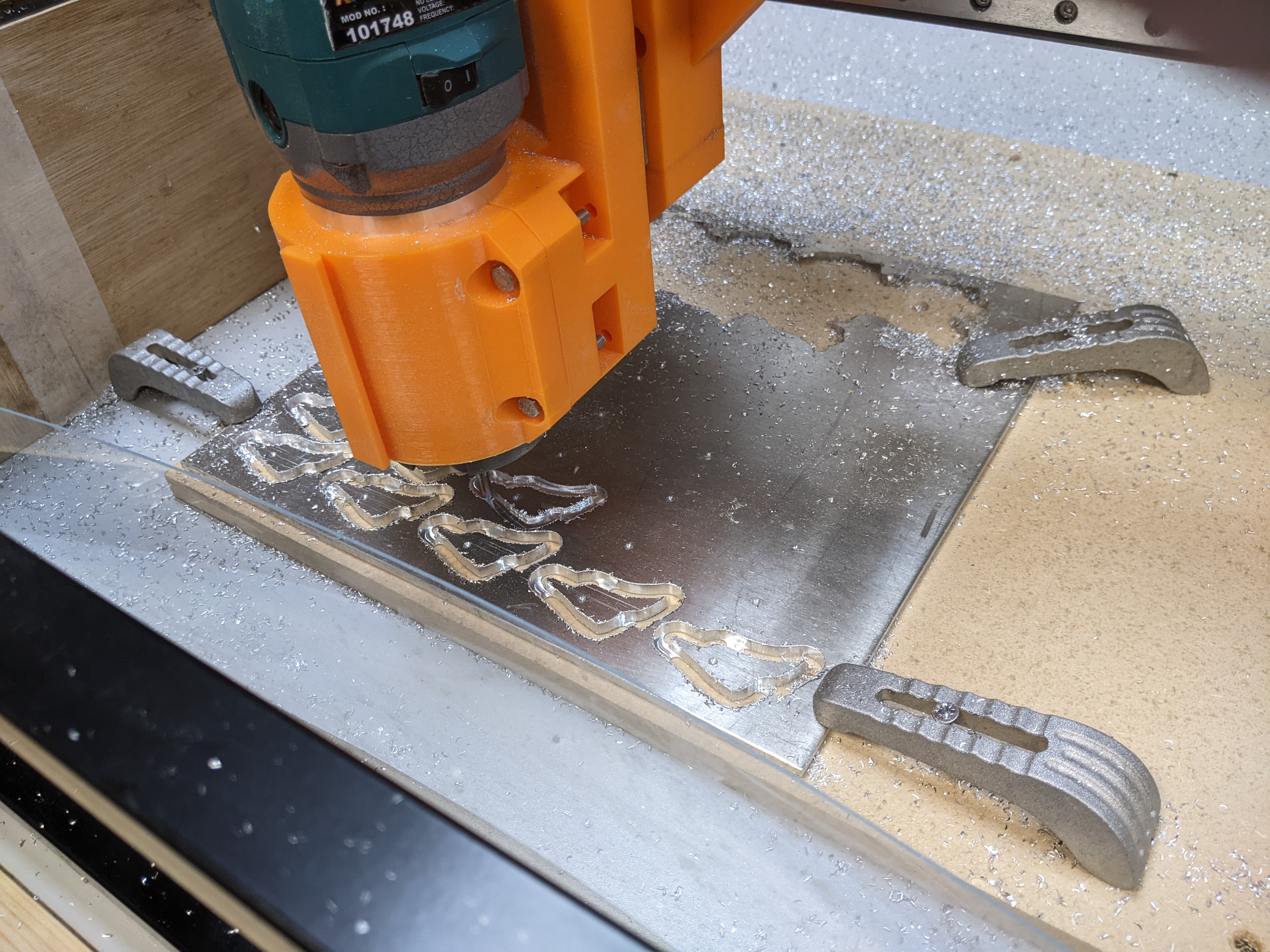 I've used my CNC to cut the rough blanks as there were so many. Each one has been dressed by hand though, with files and sandpaper and are currently at about 120 grit. All the holes are drilled and reamed, and I need to finish contouring the edges next. Once that's done, it's just a whole load more sanding to get them to a finish that will take primer (400-800 grit) and then they can be added to the parts containers for each of the Lawgivers.

One downside of using the CNC is the glitter snow that comes from being conservative on the passes: 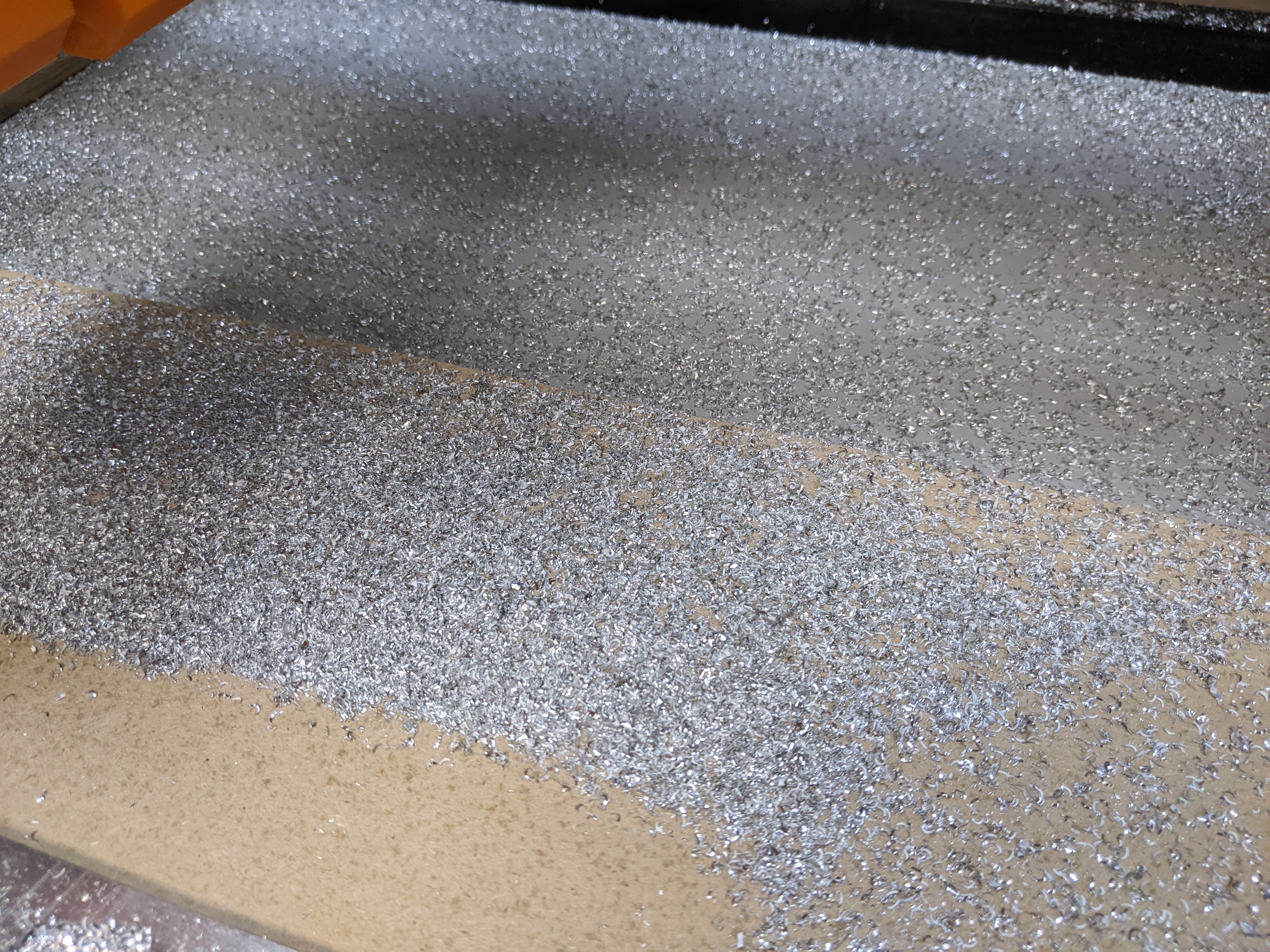 I was picking this stuff out of my hair and beard all evening!

BeakZ
Last edited: Tuesday at 6:46 AM

RPF PREMIUM MEMBER
Ugh, one day I have to learn to leave well enough alone. The ONE thing that I didn't add to the model was the suppressor, as I said in a post above originally I wanted it to be servo driven, but due to space constraints and the fact that it morphs into an entirely different thing extended I ignored it.

But I was just in the model earlier and one thing led to another and: 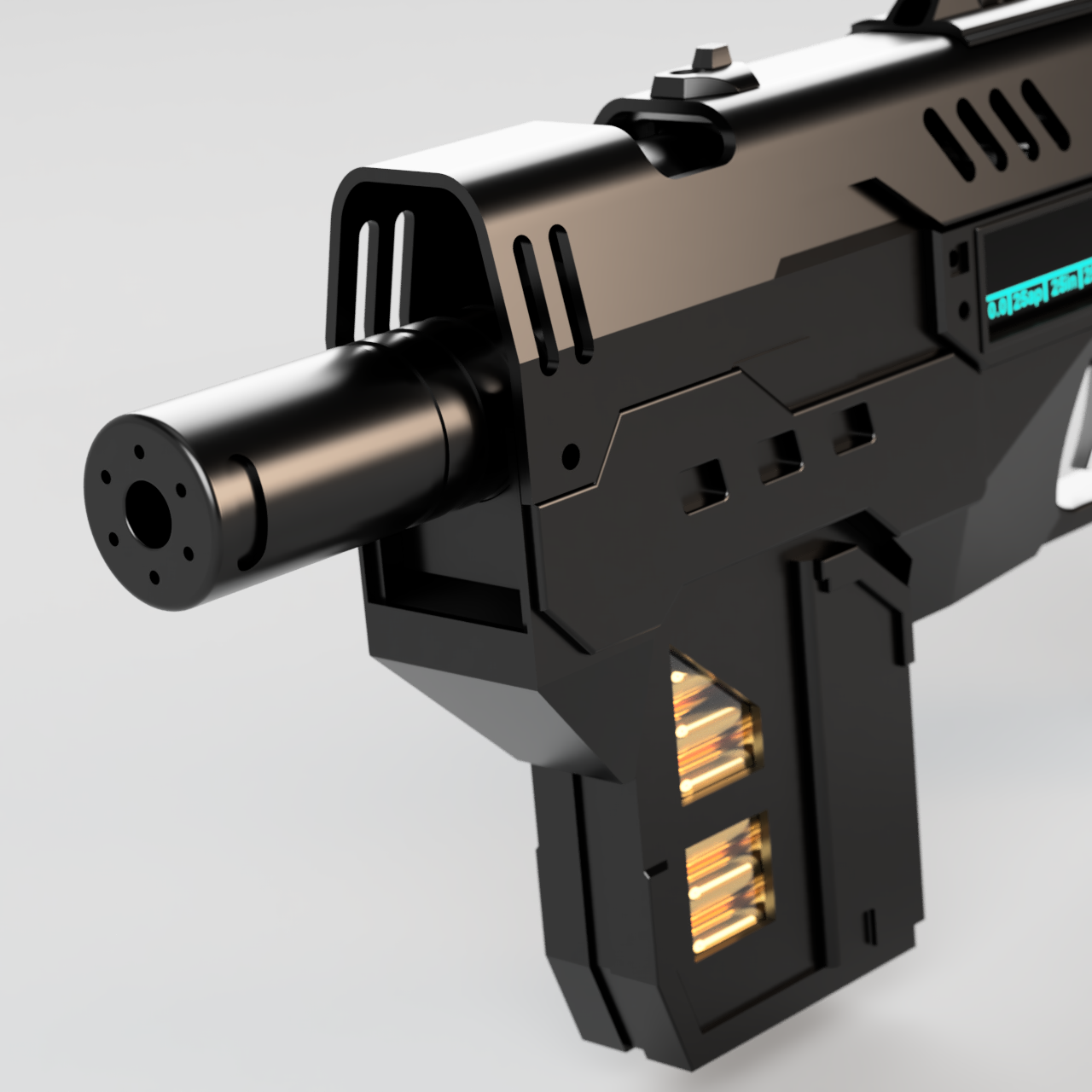 Here's the screen version, there's a little divot on top but it actually looks like damage not a feature, and it wouldn't be something you would find on a suppressor anyway, so I left it off: 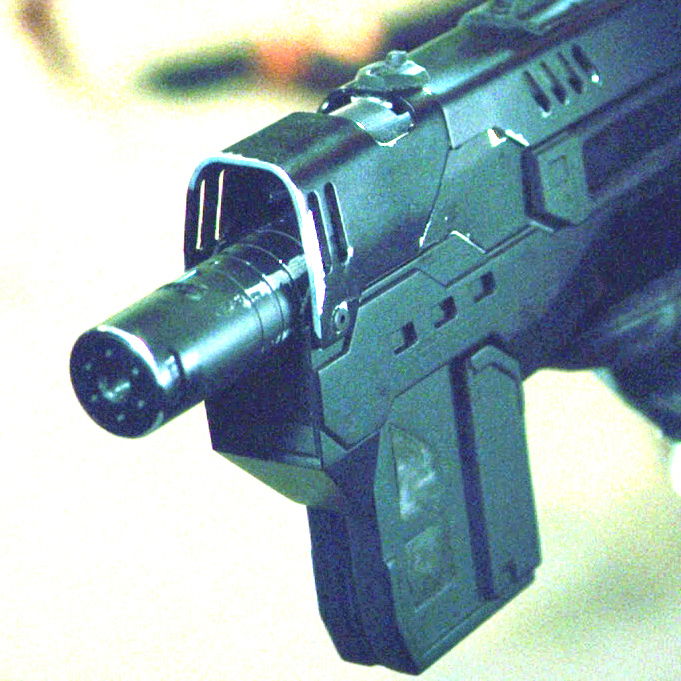 You can swap barrels just by removing the M4 screws that hold the cowl on, the part has been added to thingiverse: Dredd 2012 Lawgiver- Action, Light and Sound | Holster and Stand | V3 V2 by Props3DPro Dredd2012_Supressor_Barrel_V3

Drop in upgrade, no changes to the main models.

RPF PREMIUM MEMBER
OCD round 2 for today: The ONE thing left, that's probably so small nobody cares, is the positioning of the bullets. The bullets I added were in double stack like a standard mag, in the correct 9mm, but that's not how it was supposed to be on screen. Here's the layout for a bullet changing mechanism that was never used in the film: 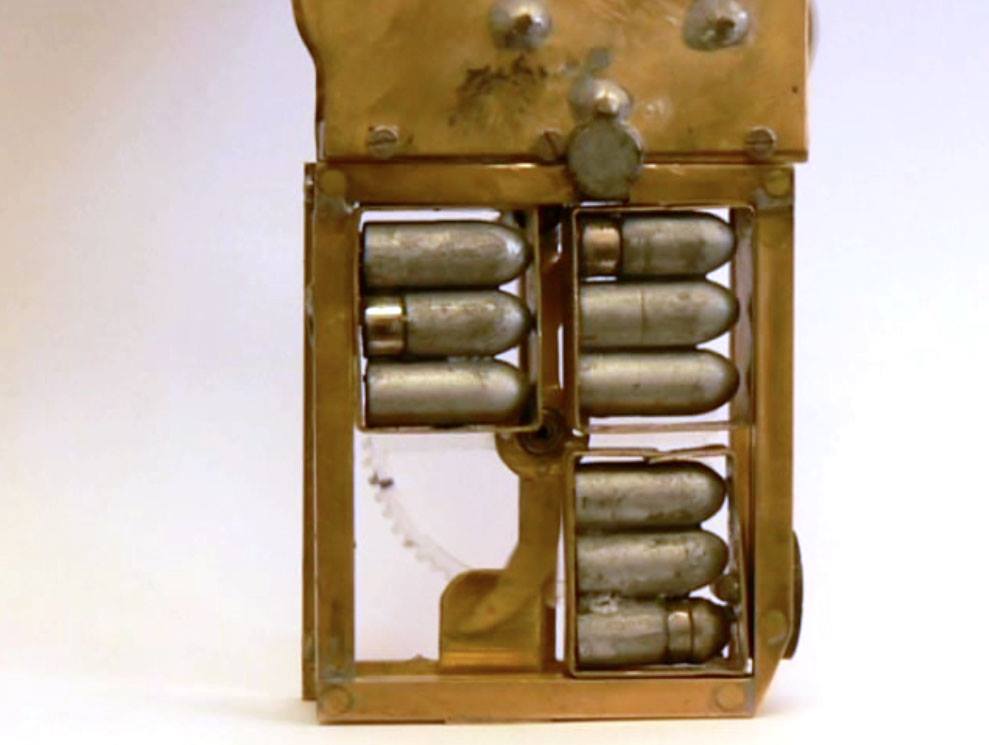 It's very clever but to my knowledge they just used a printed insert in the hero prop since this was way too finicky. But this was the intention of the design, so why not? 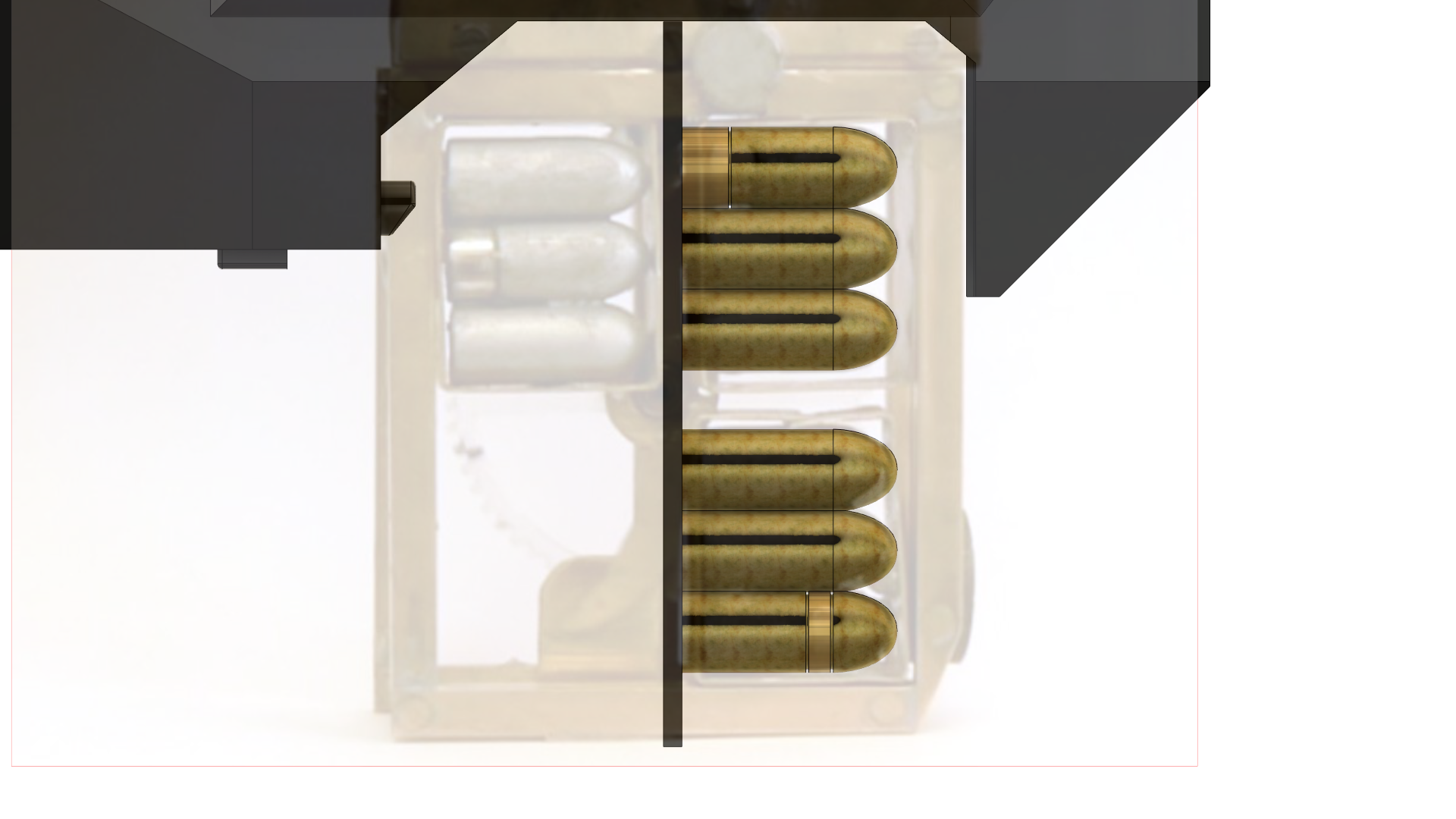 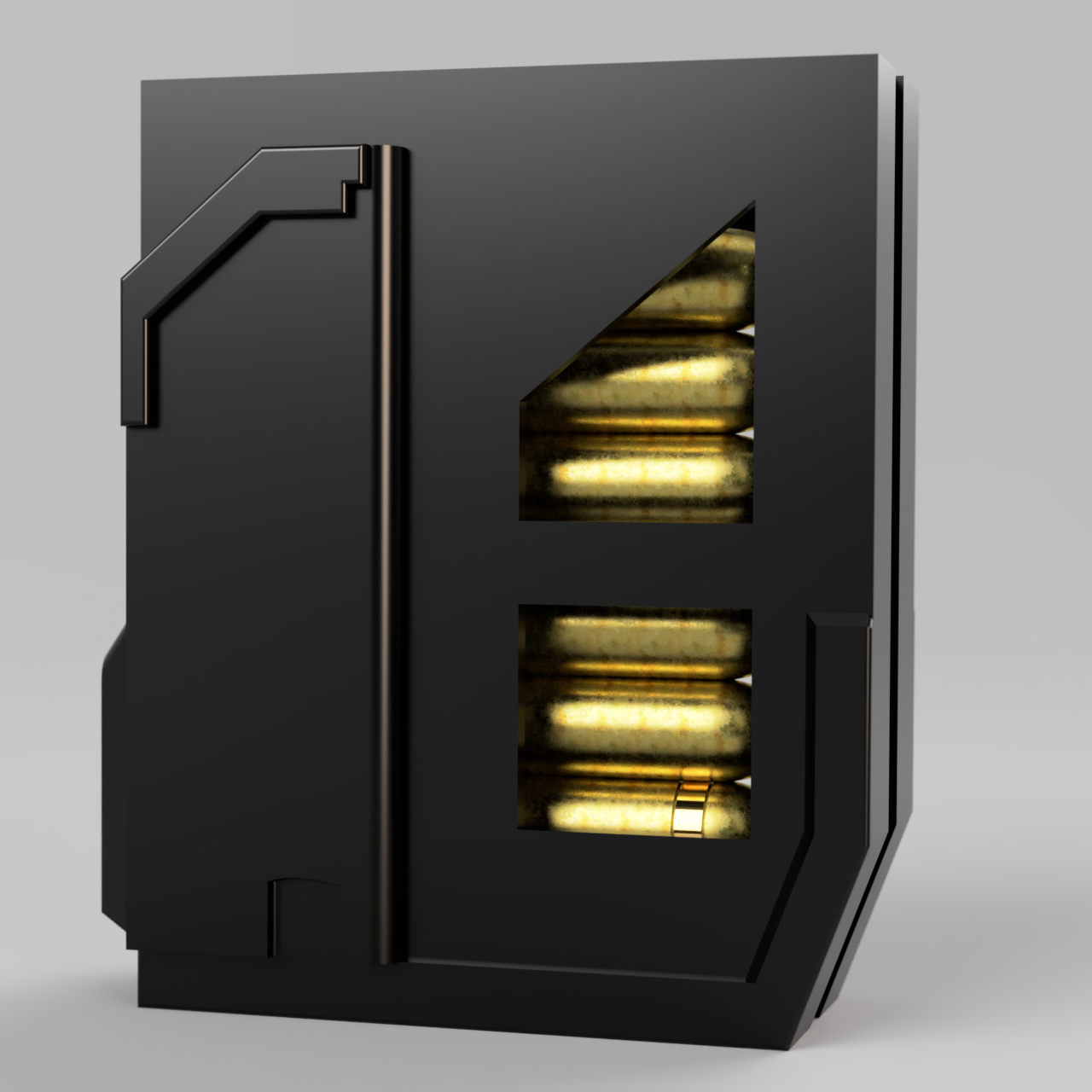 So I'll leave the double stack insert in the model package, but include this one as well. Take your pick!

RPF PREMIUM MEMBER
I've been wavering on whether or not to mention these two oddities, because from my perspective you folks have gone well out of your way to make a perfect collectors piece and it's really a non-issue, but you just keep nailing it. Just wow!

Gee2 said:
I've been wavering on whether or not to mention these two oddities, because from my perspective you folks have gone well out of your way to make a perfect collectors piece and it's really a non-issue, but you just keep nailing it. Just wow!
Click to expand...

I don't really consider them omissions since the bullets in this config were more of a concept thing, and the suppressor was a different hero prop that was subbed in for the shot. I'm at the point where it's done and asking 'what else can I add that's cool?' I think I've covered even the odd fringe features but a keen eye may spot something I missed, so if you see anything else let me know

But it looks like one of those many mechanisms that were designed to be captured from one angle and work only long enough to get the shot, you'll see what I mean when you see the vid. Entirely impractical to replicate. But for a future project I did sketch out a potential way it may work more reliably and viewable from all angles with magnets, a belt, and a track system: 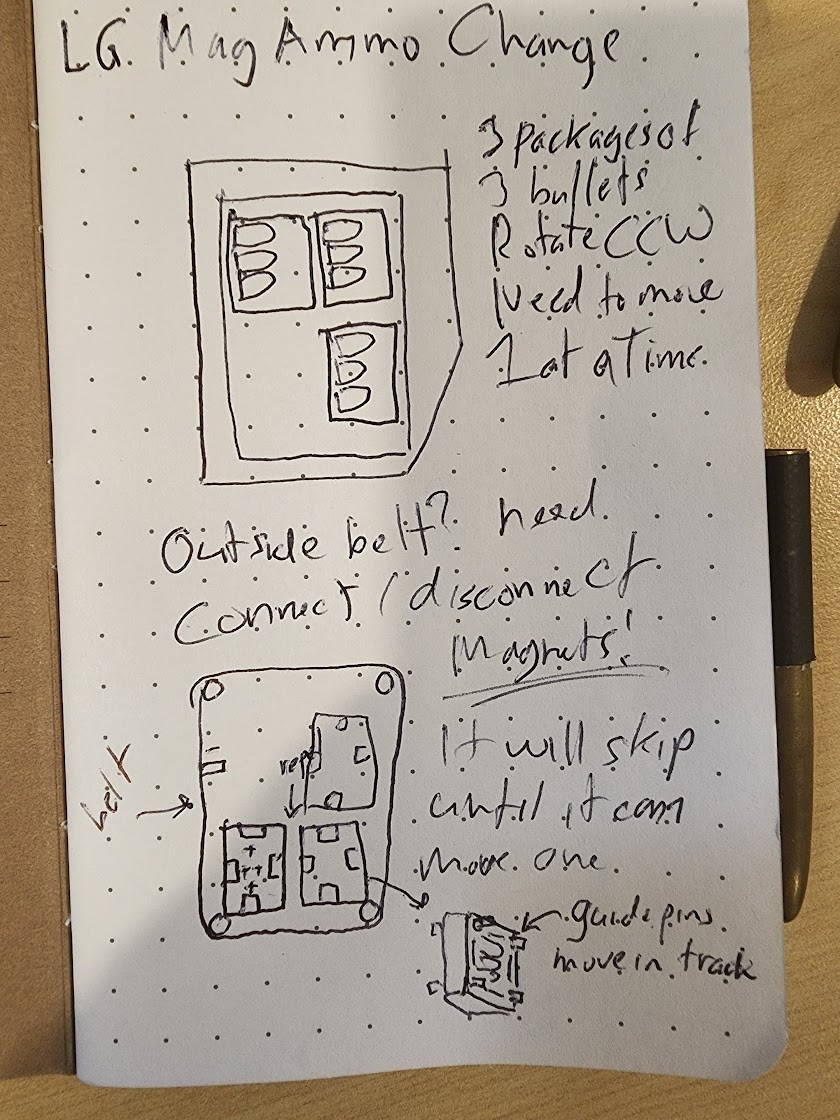 There's no way this would be anything more than a chuckle though, it would look good the first try but the smallest bit of dirt and it's done for, it's a fun thought though

On a more real note: 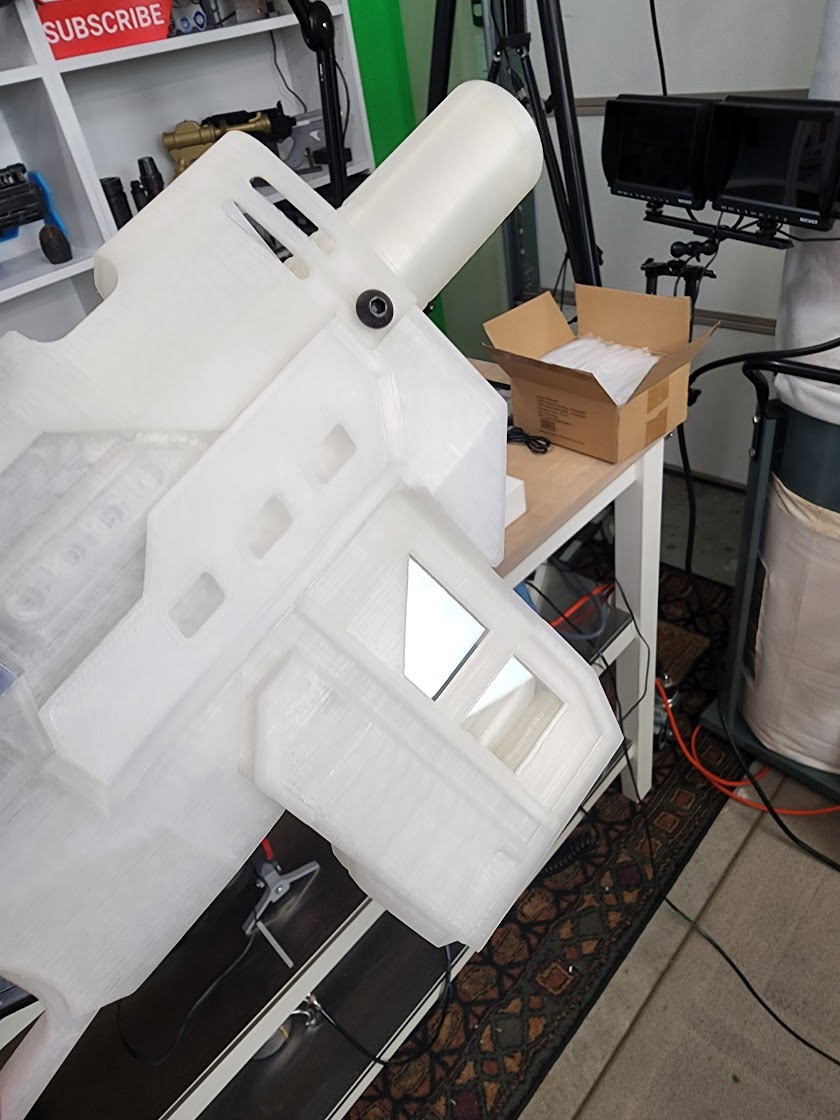 Sooo on the money, love it.

Here's the parts, apologies for the rough cut acrylic, just wanted to test it out: 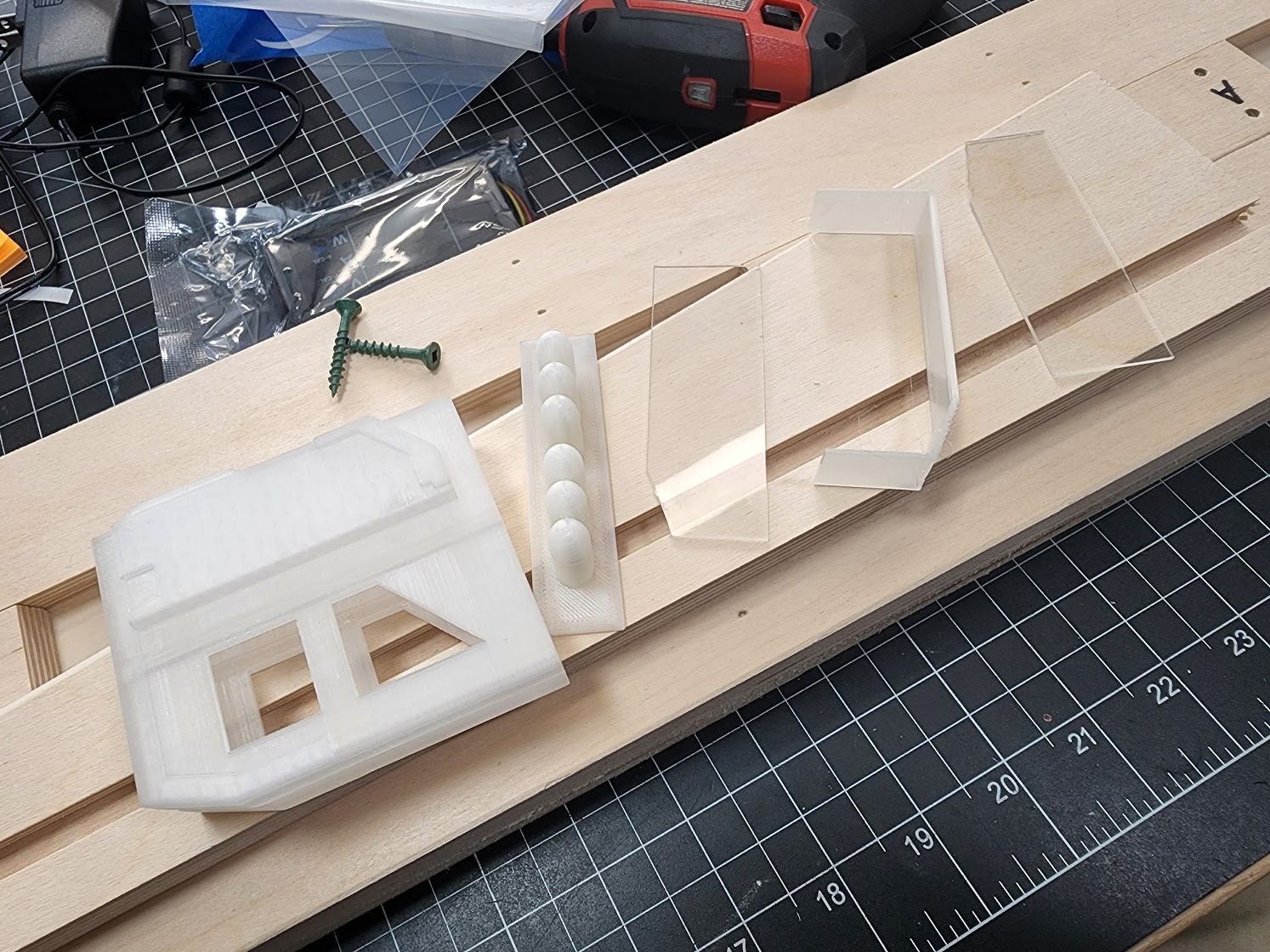 All together from the top: 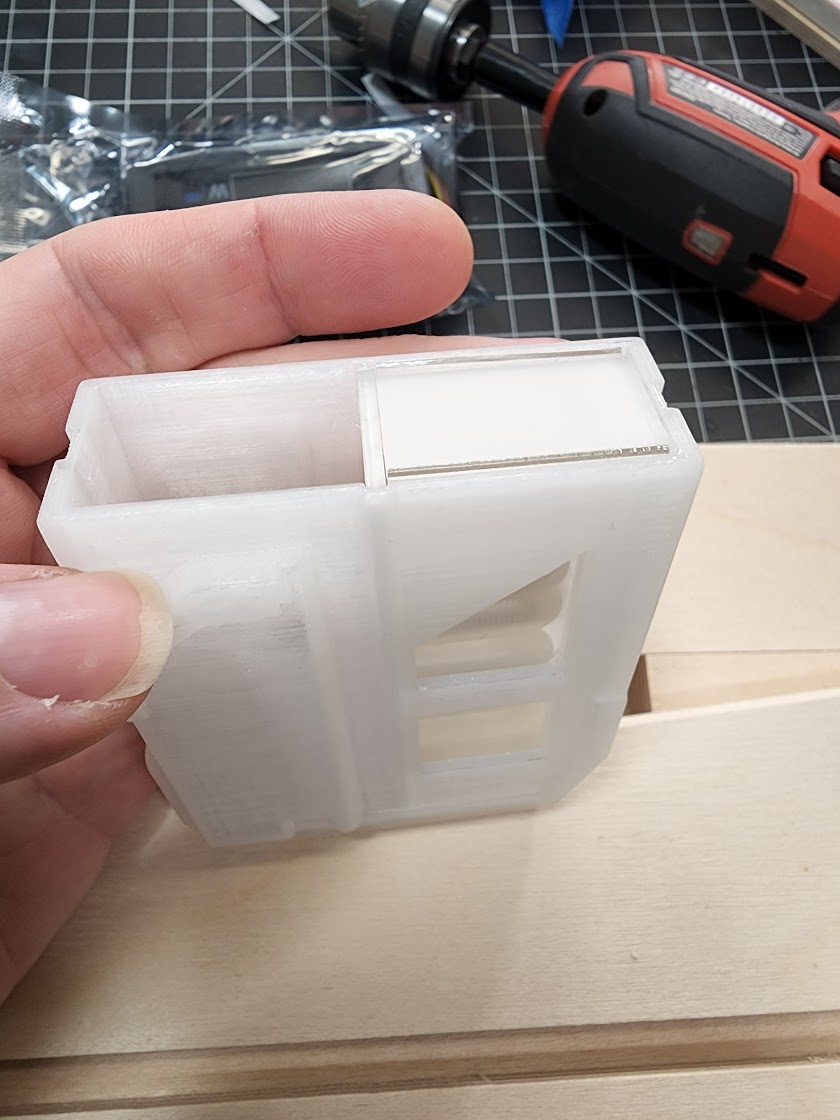 and if you reverse the bullets in the track you get an empty mag: 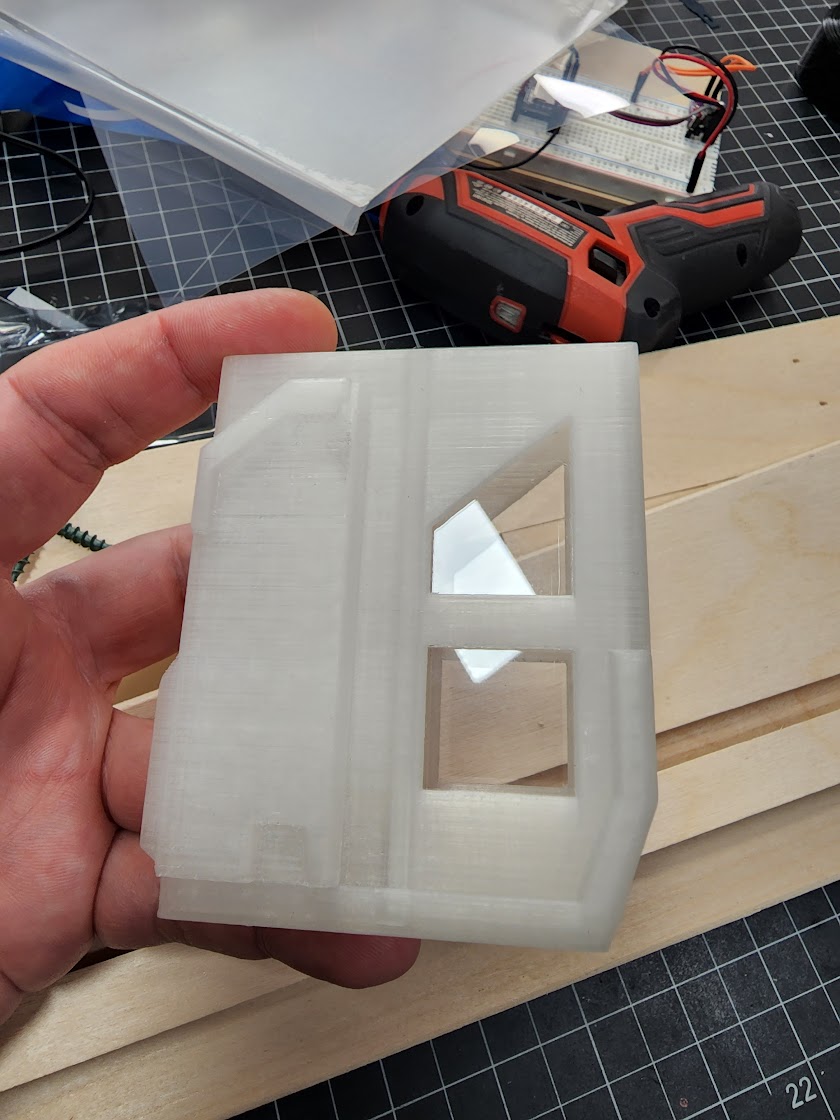 They're hidden in the back space so there's no parts to lose: 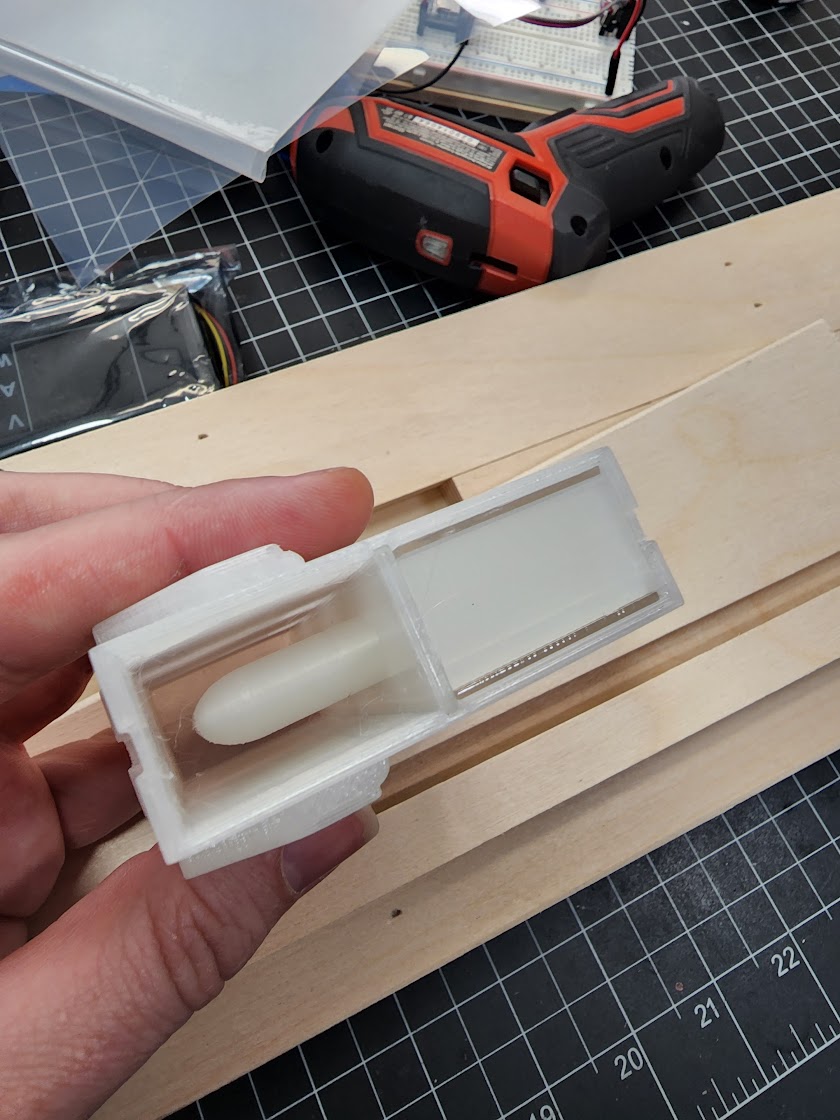 I created different sized inserts for common thicknesses, and one for transparency film if you want to go cheap, all uploaded to thingiverse.

Oh ya, and the suppressor, I'll have it painted tomorrow so it'll be more clear in pics: 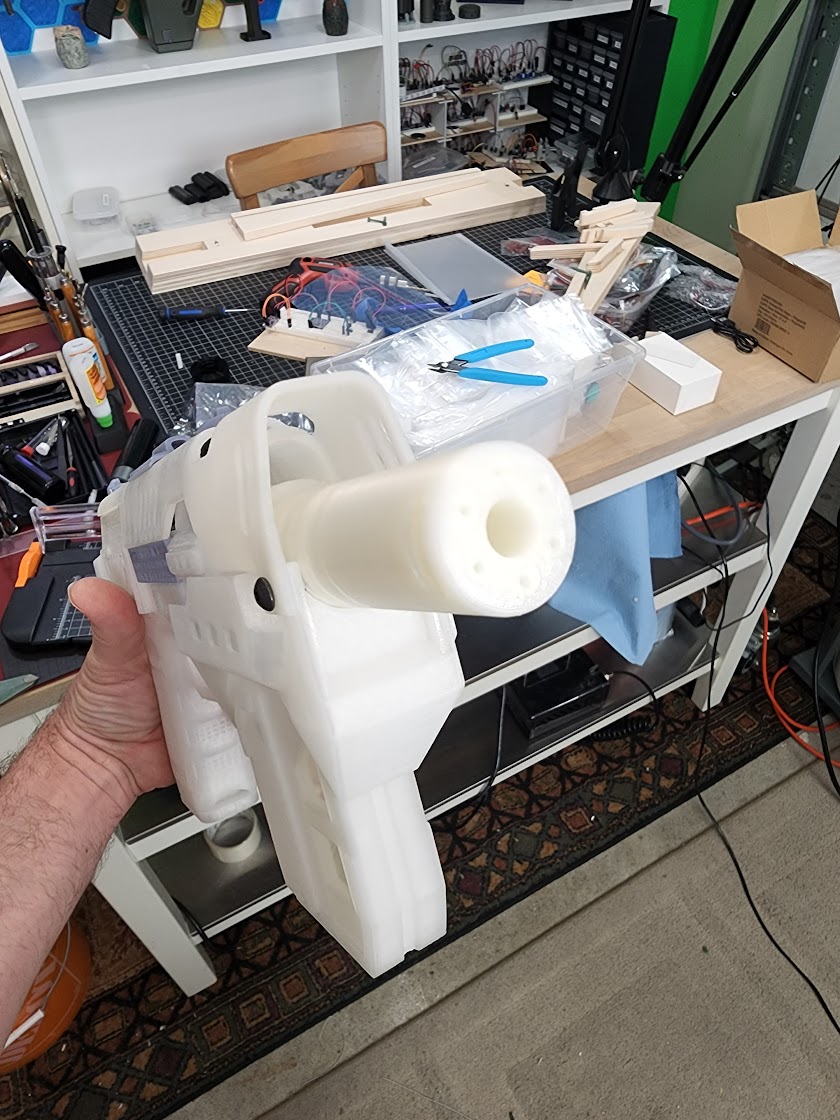 RPF PREMIUM MEMBER
2 small updates today, the first of which is a painted version of the suppressor, I totally ruined the paint mounting it an hour after painting, but I'll just sand and repaint in a few days when it's set, the other pic was hard to make out: 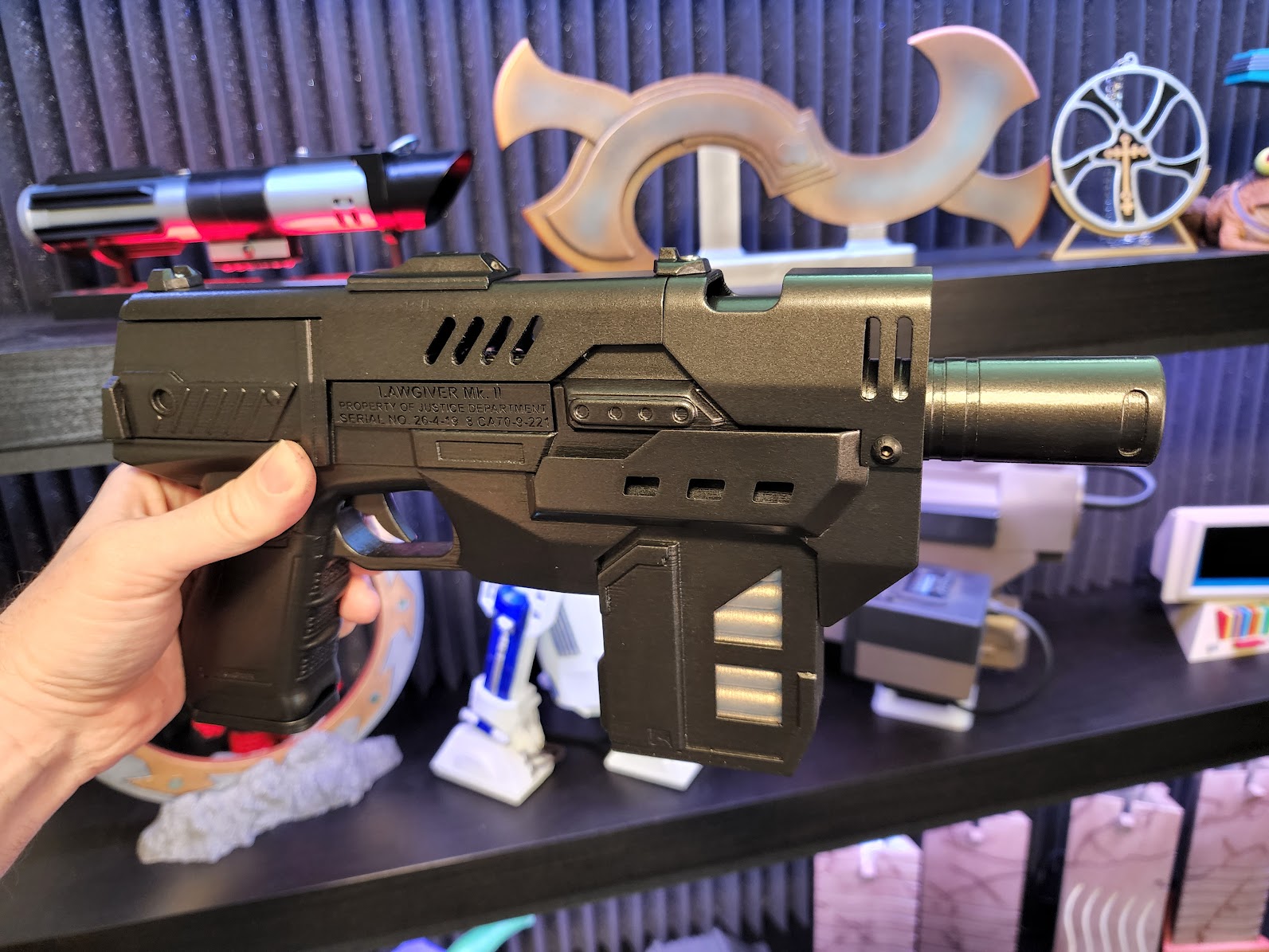 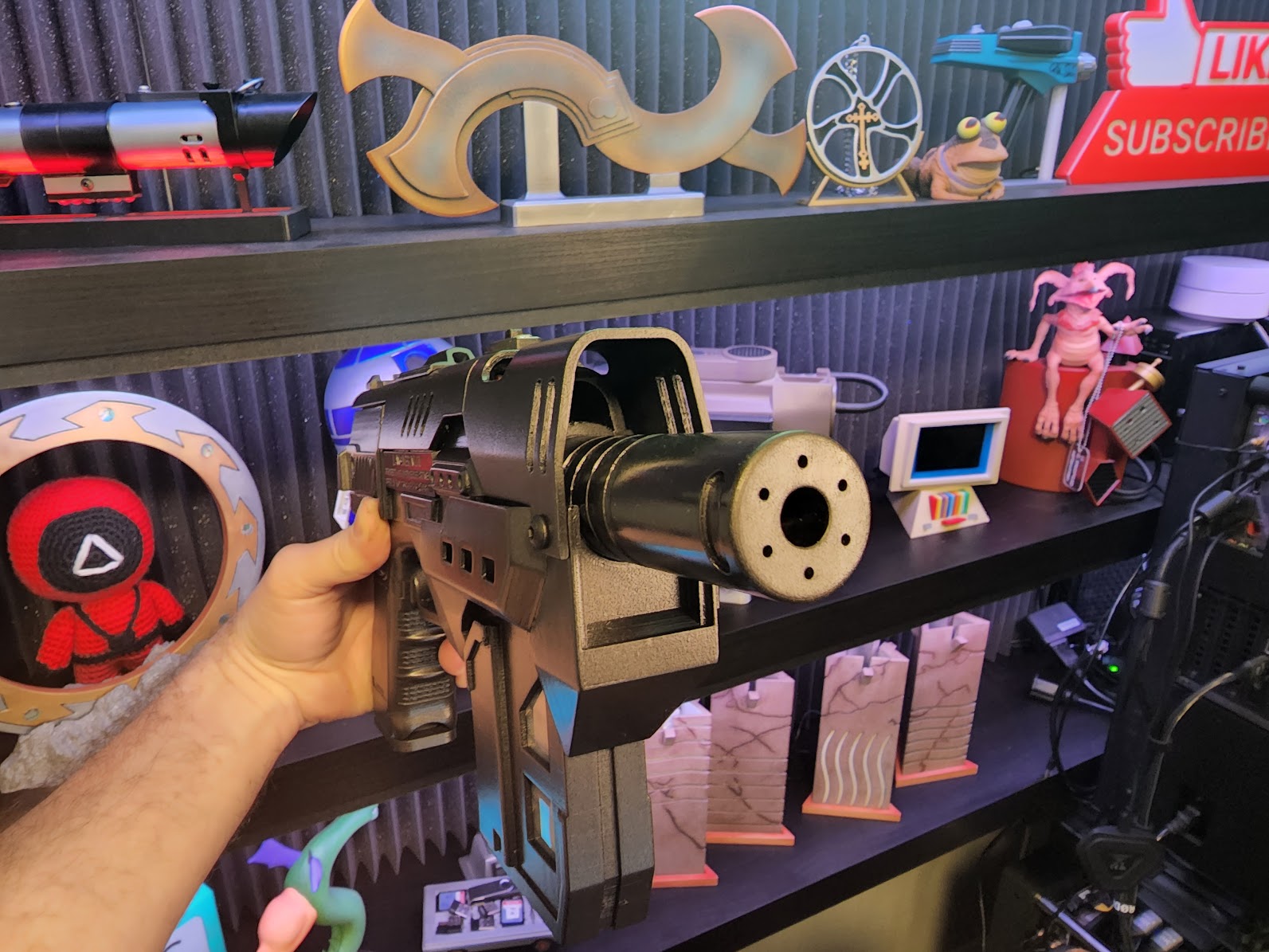 The second is more of a hotfix, I find that the top cowl doesn't sit perfectly flush sometimes since the front sight is connected to the cowl, which is connected to the electronics caddy. This can cause a slight 'hump' if it's not seated flush, you can see it in the top pic. This is easy to fix with a little seating but why make it a pain when you can just model an easy fix?

So I added this little mod to the frame so the screw now skewers all 4 parts, keeping them all nicely in place: 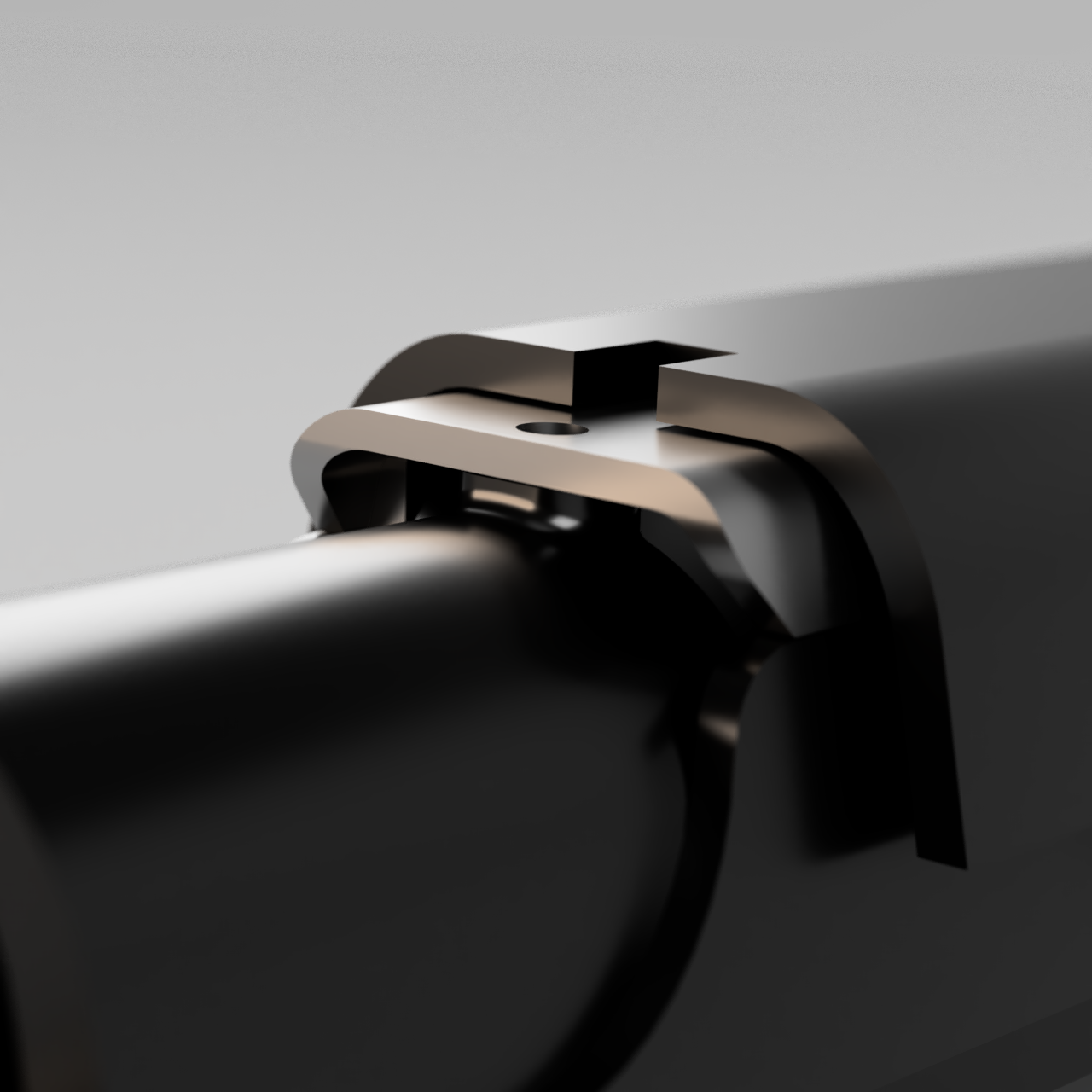 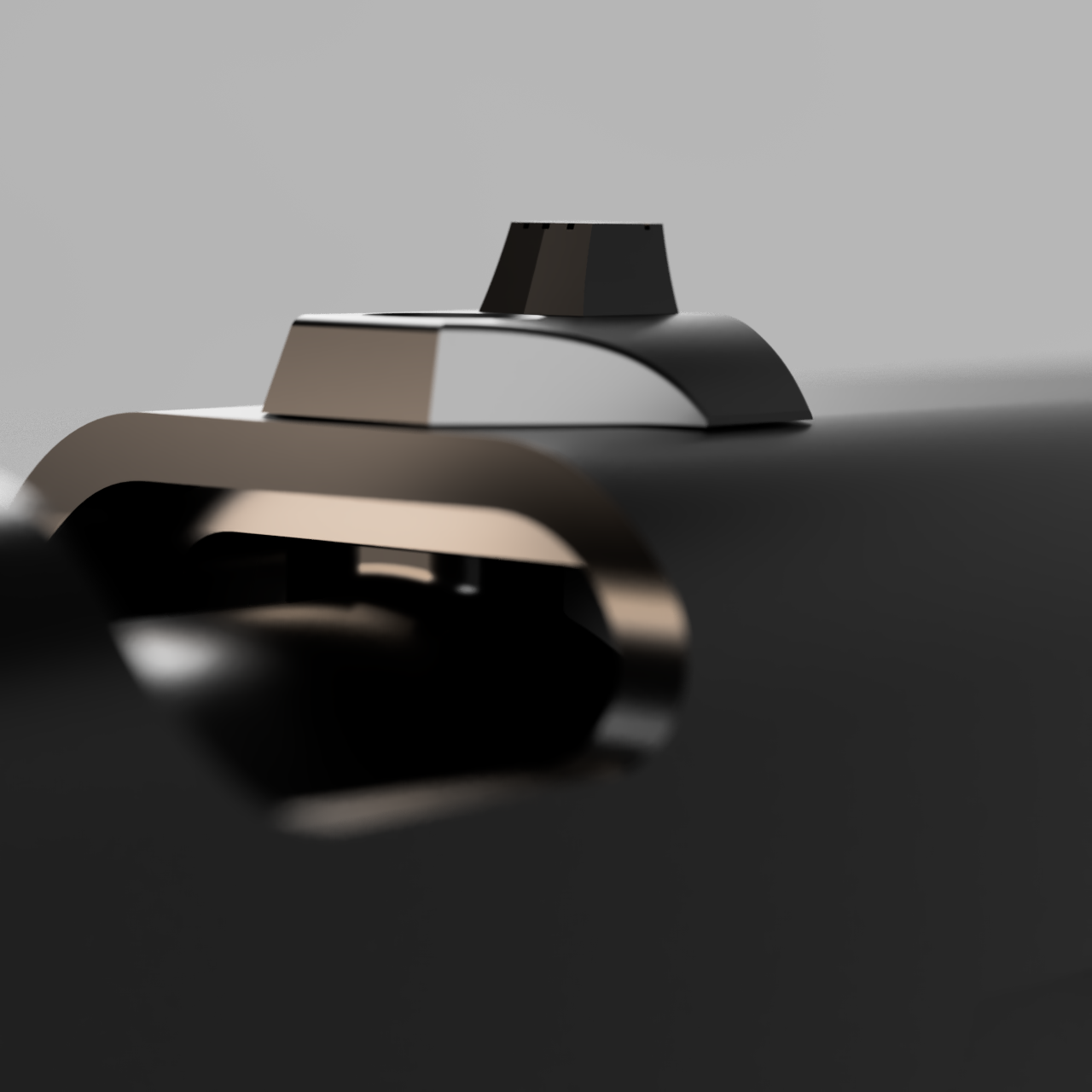 I haven't actually uploaded these yet as I want to print one and try it first, it's a little more nuanced than it looks in the pics so I want to give it a go first. I made a hotfix for the old frame version so if you've printed one DM me and I'll send you the file. 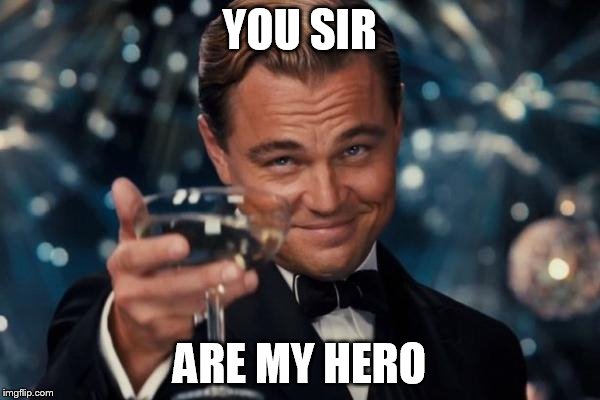 RPF PREMIUM MEMBER
I really love the glow sights and I want to improve their performance, so I increased the volume of the divot for the glow material from 1.125 millimeters3 to 2.89 millimeters3, a volume increase of 2.5X. This makes the sights glow a lot longer and show up in brighter light. The perimeter only went from 1.5mm to 1.7mm so it's imperceptible if you're not adding glow material. If you've already printed them I would NOT bother, but if you haven't and plan on making your own glow sights it's well worth the upgrade. I'll have a pic of the new glow sights in action Sunday. One thing that's slightly off canon is that the middle sight is supposed to be a laser sight and filled with a bubble...thing. To be honest you can't see it at all buried in the sight and leaving it open actually gives you a pretty usable sight picture: 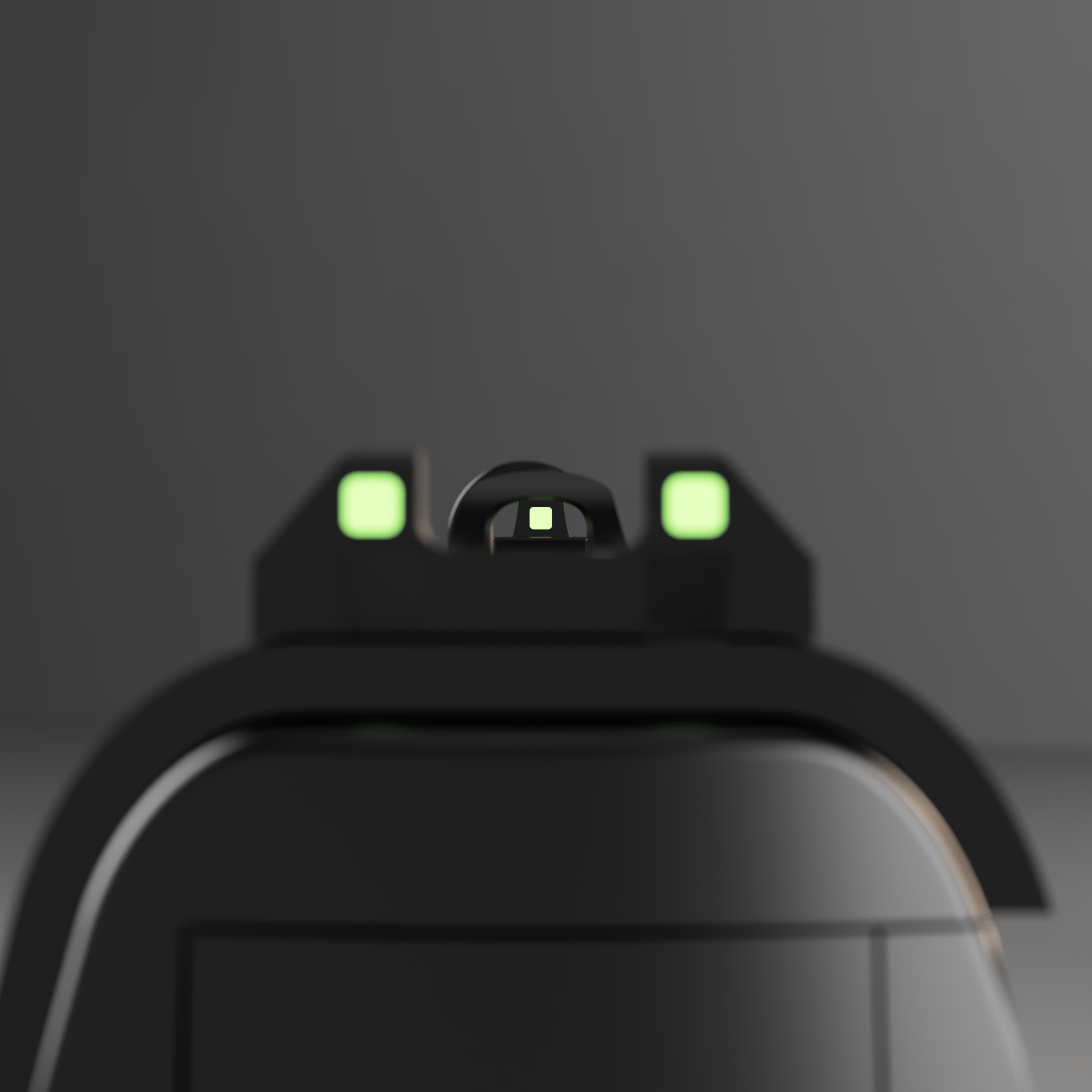 If I had left it filled there's no way you can get a proper sight picture and no way to make the laser sight work since it's just pointing at the front sight, so I gave myself a pass on this one

The interesting thing with doing a project like this, is knowing your limits and then pushing past them. As no one berated me for the dad joke in my last post, I'm going to use it again! 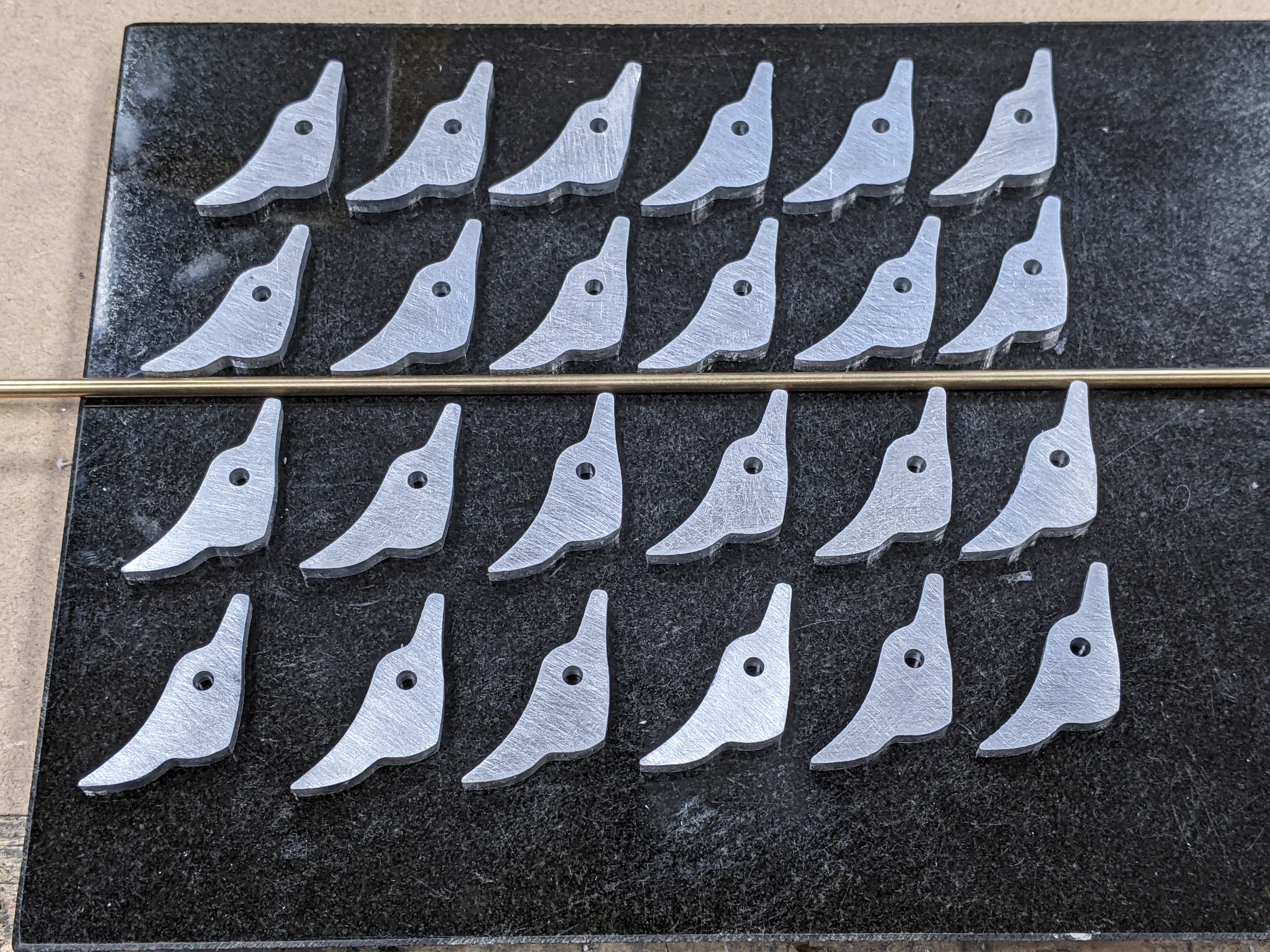 This is a whole new set of triggers I CNC'd this morning!

I took myself to one side, and had a quiet word yesterday. I said "You can do better", and after a little strong adult language, I agreed with myself. My issue with the previous triggers was accuracy. I discovered too late that I had more run-out on my pillar drill than I realised, and the 4 mm hole was sloppy. The first test I did was okay, but when I did the final setup, something must have changed, and I didn't notice.

I made myself a little reminder to check things like this when making more than one of something for other people. It will sit on my shelf and watch over all future projects: 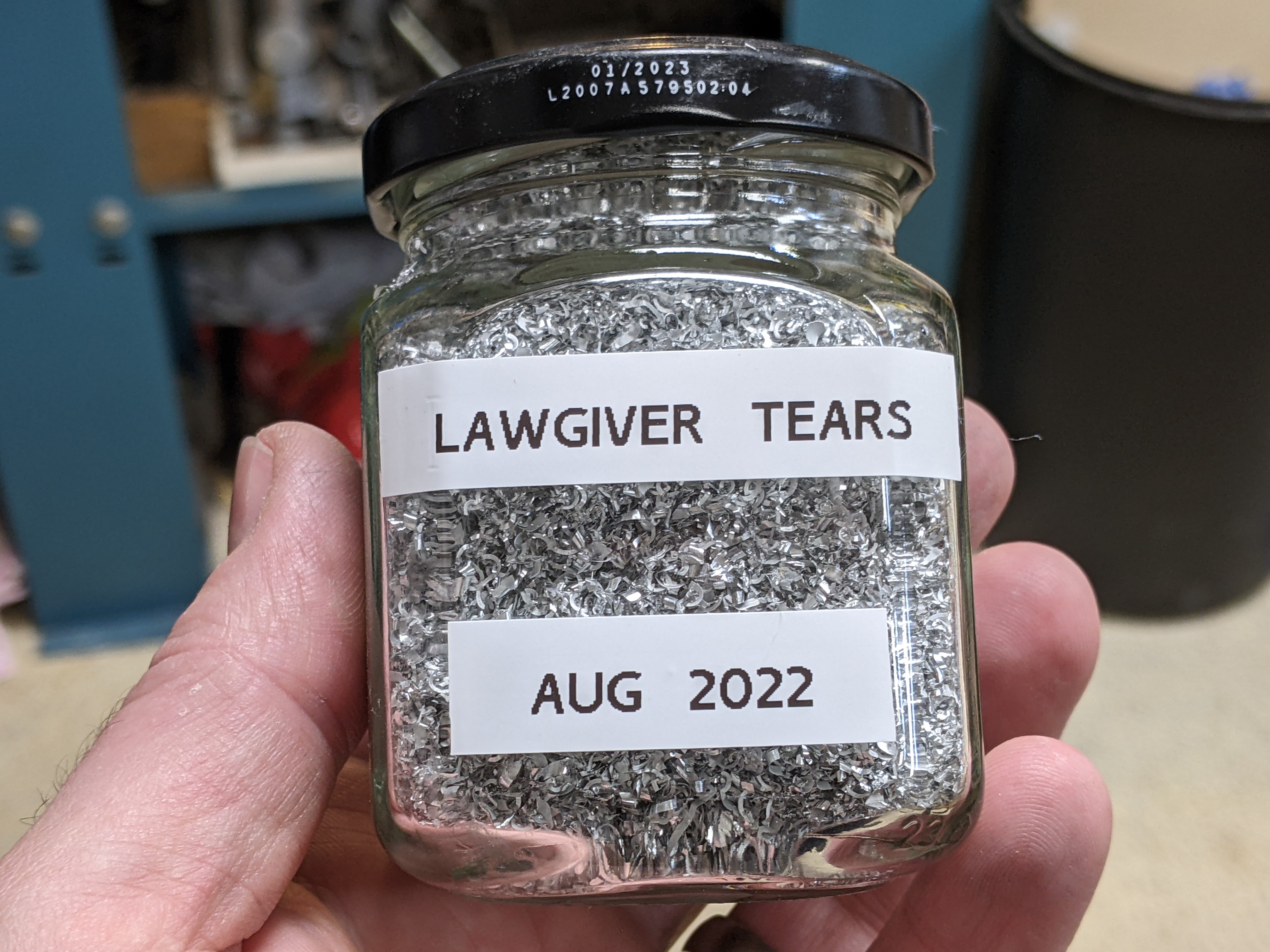 I also didn't like the chamfer on the holes, which looking back now, was a dirty way to get rid of the burr. I gave myself push-ups for that (which I pretended I did, shhh). The chamfer also reduced the bearing surface for the brass trigger pin, so another reason to ditch them.

So now I have a new batch of triggers which are going to be finish sanded tomorrow. I've finished 3 and primed them so I can see how they take paint in the morning. 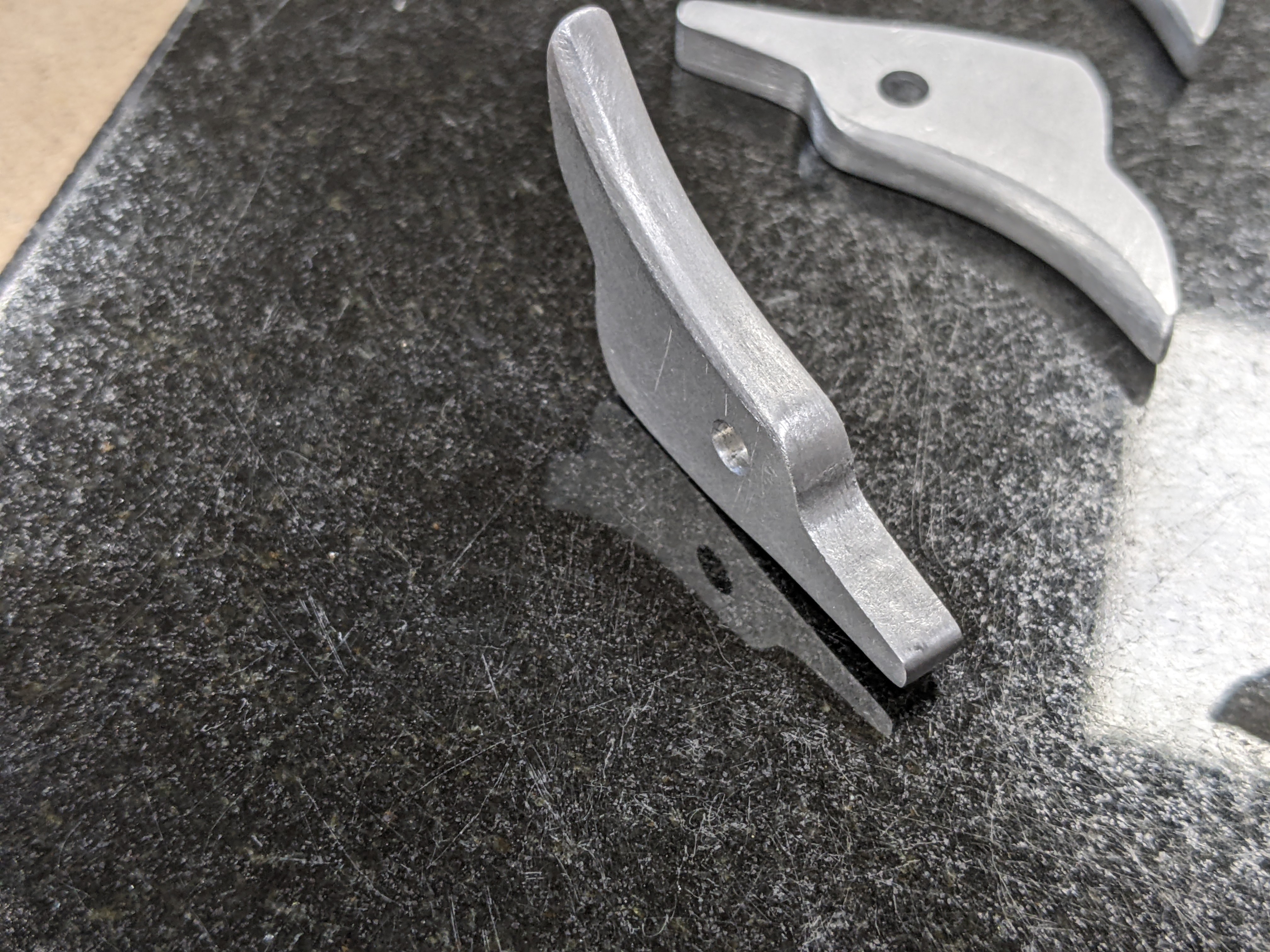 Sanded to about 320 at the moment

So things are progressing well ... on the whole! The barrels and triggers should be all done this weekend and I can get onto the Lawgivers themselves. I'm much happier with these and when they are painted and fitted to the props, they should look and feel awesome!

RPF PREMIUM MEMBER
I have to say I was drinking and coughed up water through my nose when I saw that jar, it's a very uncomfortable feeling. I feel your pain but those new triggers look way better, well worth the extra effort