www.thingiverse.com
‐-----------original post below------‐---
Working on a full Dredd 2012 lights/sound 3d model and build. Spent my xMas pouring over references modeling this up for 3D printing. After 212 versions I finally have this: 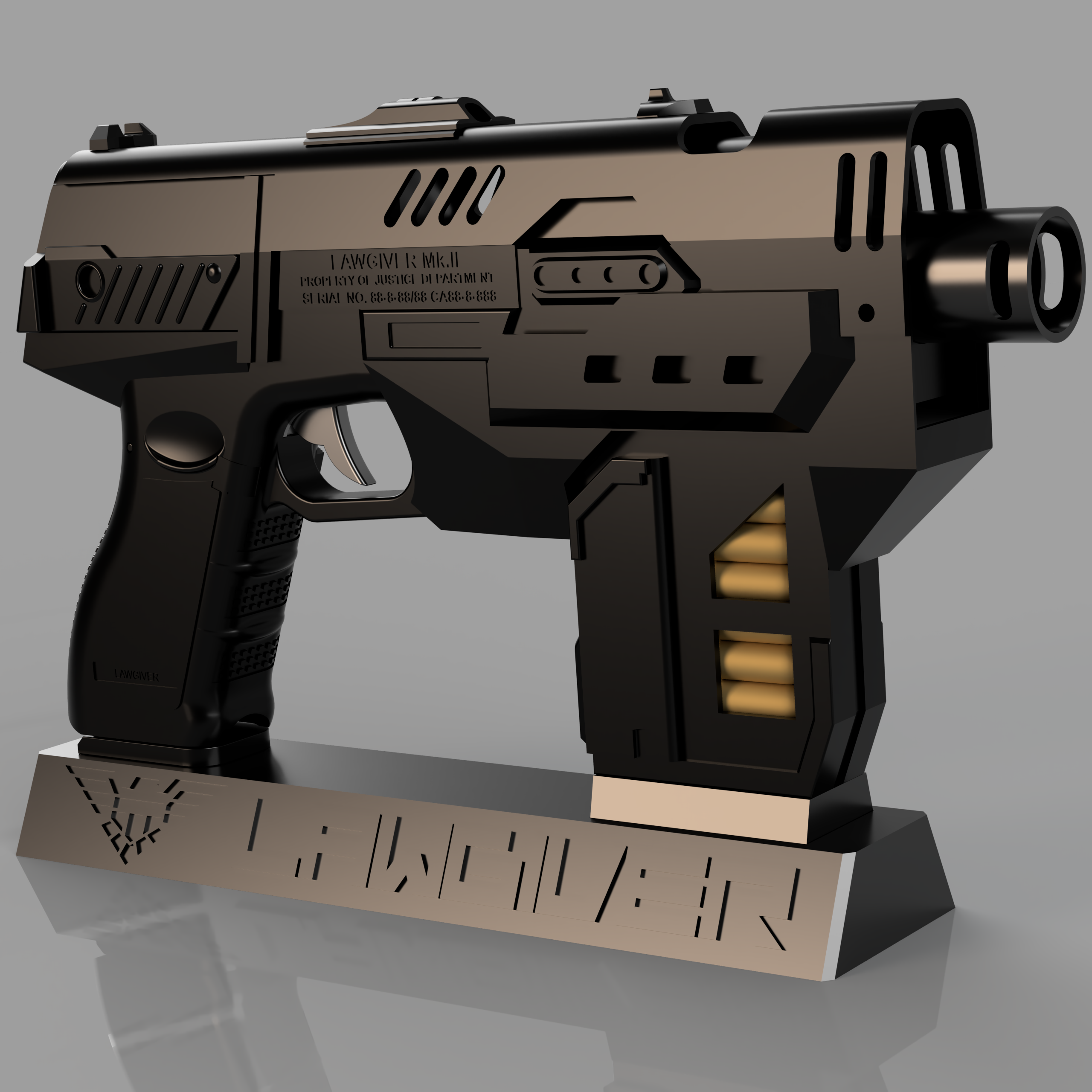 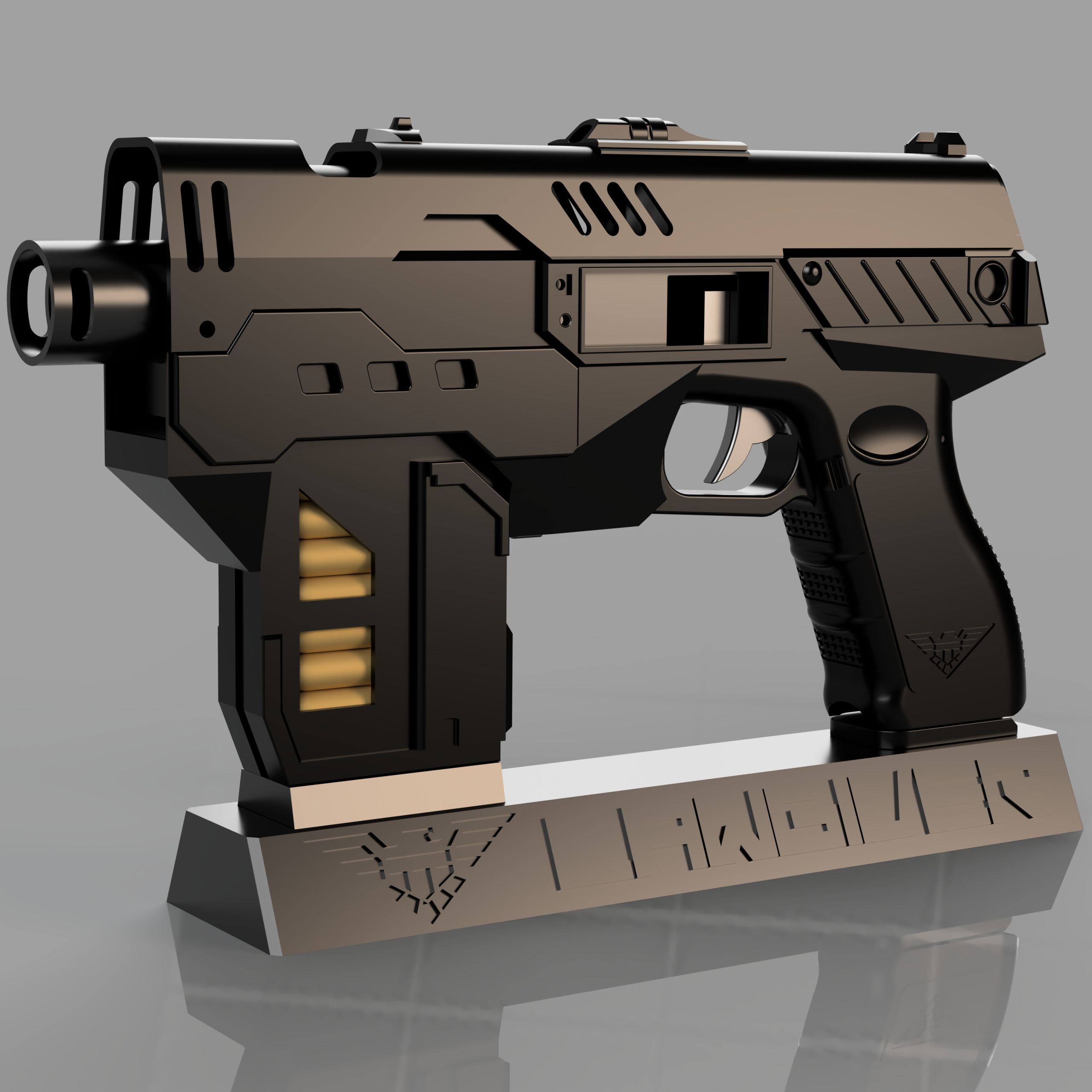 It's 3D printable with very little support and has a ton of features. They've all been tested separately but I don't have anything close to a final yet

You can see my test prints here: Props3D Pro on Instagram

I'm teaming up with Spidey74 who's doing the code half of this as well as a build of the models as it progresses. So far he's gotten most of it working, I'll leave it to him to update that side.

At the end I'll be posting the models on thingiverse for free and the code on our Github page. Since it's all over the place as I'm versioning this I'm just going to post updates

If you do want the models to join in, DM me and I'll link you the package, I just ask that this is a non-commercial release and you keep it as such. Sharing is caring!
Last edited: May 15, 2022

RPF PREMIUM MEMBER
Added a holster, there's a retainer strap so it stays put. Made 2 mounting methods: Duty belt and drop leg. Drop leg is going to require Kydex or requiv for the actual leg part, 3D printing isn't that strong. Added a large support block and 4 M5 holes to attach, should be more than strong enough.

RPF PREMIUM MEMBER
This has been such a fun build with Props3D. I've printed most of the parts and so far everything fits very well with little to no clean up. Next up for me is to finalize the code and fit all of the electronics.

We'll be using Arduino Nano to run all of these components, and it's been going pretty well. Still need to add code for the reload micro-switch, and tweak the VR module, but it's working pretty well. 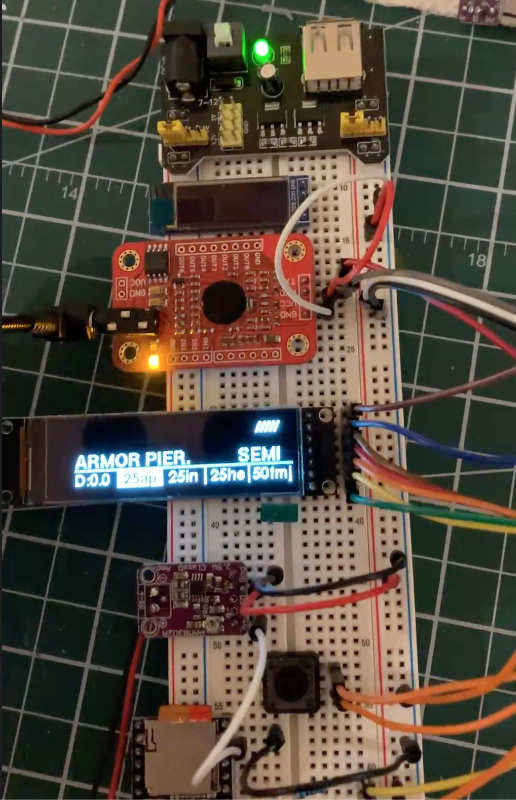 looks great. have you published your github repository details yet? i'd love to have a look at the code. cheers

martinr1000 said:
looks great. have you published your github repository details yet? i'd love to have a look at the code. cheers
Click to expand...

Haven't pushed any code to Github yet but will soon once everything is working.

Props3D on Instagram: "Ha! It works. Did the holster on a request by @craiggulliver. Has a point for strap retention but works great as is. #dredd2012 #dredd All my designs are free! youtube.com/c/Props3D thingiverse.com/props3dpro/ discord.gg/Rjn

Props3D shared a post on Instagram: "Ha! It works. Did the holster on a request by @craiggulliver. Has a point for strap retention but works great as is. #dredd2012 #dredd All my designs are free! youtube.com/c/Props3D thingiverse.com/props3dpro/ discord.gg/Rjn6MRfxQS #3dmodel #3dmodeling...

Not sure how I can embed a video here so just linking the vid in Instagram above, new member so help would be appreciated. But here's a test of the 3D printed holster for the Lawgiver 2012. I honestly didn't expect it to work as well as it did. I did the belt version shown here and a drop leg version.

The 3D print of the Lawgiver itself is a draft copy and has a lot of changes since then, the new version is in a slowly accumulating bucket of parts.

Turns out I already follow you on Thingiverse . This particular gun was on my future project list to do a laser tag version of so was going to be a full sound/light build. Unfortunately my current custom boards don’t support the display like that so will need a redesign. Would you mind if I use as a base when you do release it ? (If you do). Will save a ton of work having a version that already has space for some electronics.

RPF PREMIUM MEMBER
This just uses some off the shelf parts, so really cheap if you need new boards, I posted the start of a shopping list above. You're welcome to use/remix it any way you like for personal use.

Only thing I ask is that since I give away my work for free you don't sell derivatives without discussing it with me first, and I hope you post you're willing to project models and code for free as well after just like I did. (That last bit is totally up to you of course )

No problem. I don't really sell much of anything anyway. I dont have any etsy shop or ebay account for selling either. The lasertag hobby in the UK is basically about 30-40 people max, most of us have known each other for years and we tend to do a lot of weekend themed games. So stuff like Aliens, Babylon 5 (which is why I did my lasertag ppg which is available on thingiverse) , WH40K, Star Wars etc.
I tend to build kit just for us, mainly as I'm the one handy with a soldering iron lol. I only really cover costs to build, unless I'm making one as a gift for a friend. The boards I make are totally custom, as they are small enough to fit inside the grip of a ppg and drive an IR led at around 1.5 amps as well as do the sounds (wt588d), muzzle flash etc. PIC chip based, which is my problem with driving the display on a lawgiver, just not enough memory on the current chips used to do it unfortunately. Some of them wouldn't have been possible without the small size of the electronics.
Your parts list is actually pretty similar to what I use anyway, same speaker, tactile switches, lithium batteries.

While I don't end up putting all my stuff online, mainly cause most of them aren't worth it, I do put a selection of models up for free, recently added a Dune shield generator and crysknife, PrusaPrinters or Thingiverse - Digital Designs for Physical Objects if you want to see what I have. I fully understand about not wanting to be taken advantage of and if you don't want me to then no worries. I'll eventually get around to modelling one. I think its the effort involved in the electronics redesign thats been putting me off anyway.

Many of the gun models I've done lasertag versions of are only for personal use so they don't get posted anywhere. So far I've done amonst others, PPG, Laspistol, M2019, Mando's blaster, the Glie 44, Discovery phaser, blakes 7 liberator wand and the scorpio clipgun, Space 1999 blaster to name some from various sci fi shows.

Again, you're more than welcome to use whatever you like for personal projects, for your group or whatever, just not retail without talking to me about it. I can send you a zip of the models, but the code isn't done yet and the electronic parts list is subject to change as start some of the nitty gritty sorted.

Just note the models all work, but have been going through a lot of fit and finish changes as I noodle over options, so they're 'as is' unless you want to wait until they're finalized, which hopefully will be in the next week as spidy74 gets his done. If you want to print one up and give me some feedback as well I would much appreciate it.

One thing I don't see on your parts list that you might have already considered is some form of charge controller for the lithium. I don't have enough of a feel for the space internally or where you are locating all the internal electronics but something where the charge connector is in the magazine well so that if you pop the mag out you can plug it in to charge might be convenient.

If you were using a single 3.7v cell then I'd use something like a TP4056 but there must be something equivalent for a 7.4v.

neophyl said:
One thing I don't see on your parts list that you might have already considered is some form of charge controller for the lithium. I don't have enough of a feel for the space internally or where you are locating all the internal electronics but something where the charge connector is in the magazine well so that if you pop the mag out you can plug it in to charge might be convenient.

If you were using a single 3.7v cell then I'd use something like a TP4056 but there must be something equivalent for a 7.4v.
Click to expand...

Thanks for the idea but the battery is removable so I'm not worrying about a charge port. There's a battery plug in the grip and you can just swap it as needed. Integrated charging is a good idea but it's so packed full of components right now anything that can be done to simplify it is welcome.

RPF PREMIUM MEMBER
Published the models early, was getting a bunch of DMs for them, I hate keeping things under my had, had a call with Spidey74 and he says the parts are all good on his test as well, so here you go:

Question on the 7 bit LED - Neopixel is the NeoPixel Jewel - 7 x 5050 RGBW LED w/ Integrated Drivers - Natural White - what would be needed or is this to back light the LED?

crighton said:
Question on the 7 bit LED - Neopixel is the NeoPixel Jewel - 7 x 5050 RGBW LED w/ Integrated Drivers - Natural White - what would be needed or is this to back light the LED?
Click to expand...

It's for the fire effects, there's screw mounts for it on the frame behind the barrel. It's run directly from the buck converter.

The OLED panel generates it's own light so it's good to go and is powered directly from the Arduino.
Last edited: Jan 14, 2022

Very nice indeed. Interested in making one of these to upgrade from my static 3d print, thank you for sharing it and looking forward to the code

The basic coding for the lawgiver is finished. Pretty happy with it at this point. May need a few tweaks once we finalize the audio files, for timing and such. Still looking for good audio effects, once I have them sorted then I'll publish the code on Github.

Boot up sequence includes:
The DNA Check requires the trigger to be depressed otherwise it displays ID Failed, and must be power cycled.