Well, when I go indoors I don't really "know" that the sun is still out there, but I don't need an official statement from the scientific community to realize the obvious.

Maybe we should change the subject.
I don't want any of you fine fellows banned.

So, how about the last Star Wars movie?
Can you believe Darth Vader turned on the Emporer? I wasn't expecting that! Could have done without the teddy bears, though.

RPF PREMIUM MEMBER
That's just it. The overly politicized culture we currently live in makes every move seem suspect. 20-30 years ago I would've thought, "Probably just a marketing move since only nerds like me know the names of these ships." Nowadays, recognizing it as some kind of PC appeasement will more likely turn out to be the correct assumption unfortunately.

Setting aside any political motivations, I don't think it's a necessary move just from a marketing standpoint. Yeah, I'm sure there's a non-fan parent out there that would be helped by seeing "Boba Fett's Starship" on the box, but I'd say most people are savvy enough to figure out that "Slave 1" is his ship. And there is still the picture on the box after all. If name recognition is genuinely a problem, just slap Boba's face on the box. That's a much better solution anyway since I'm sure there's also a parent out there that doesn't know the name- "Boba Fett".

Axlotl said:
Maybe we should change the subject.
I don't want any of you fine fellows banned.

So, how about the last Star Wars movie?
Can you believe Darth Vader turned on the Emporer? I wasn't expecting that! Could have done without the teddy bears, though.
Click to expand...

Since it’s very unlikely that we’ll hear more about this officially from Disney, and people have already inferred the various possible reasons why this happened (and no one can really prove one over the others, if that even matters), that part of the conversation is essentially a dead end, particularly because dancing around political or quasi-political things seems like where things go next. No interest in that.

Instead, we can discuss what happens from here. My guess is that Slave-I isn’t gonna get renamed, as even Disney is smart enough to know that that would cause even more consternation among fans. It would be pretty easy to keep having the ship appear, and never have anyone refer to it by name, as happened in the OT.

Now that they’ve kinda made a mess of things by upsetting the status quo, though, perhaps the easiest way for Disney to deal with this is to just have Slave-I get destroyed early on in the new series. Then Boba gets a new ship, with a new name. Problem solved, as far as they’re concerned.
Last edited: Jun 29, 2021

RPF PREMIUM MEMBER
Perhaps I should refrain from linking the article directly then to avoid the potential for political talk. If anyone is at all interested PM me and I can link it privately so as to respect the forum rules. 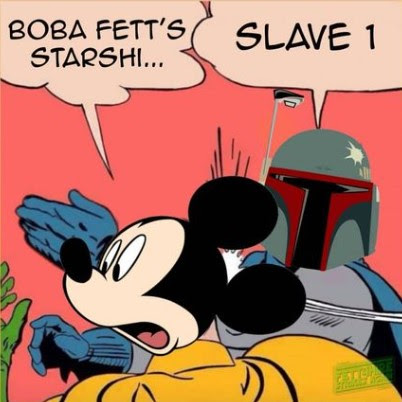 I'm going to delete this because while I don't think it's politics, more of a social issue, I don't want permabanned!

Geez what's next, instead of the 'Death Star' it will be called the "Permanent cessation of all vital functions Star" ?

I bet that Disney would get so upset at this outfit, that they try to alter it digitally so that she's shown wearing a skin-tight suit underneath to cover all the skin. I would not put it past them.

Darth Lars said:
I still think it makes more sense these days to use the names that people recognise directly from the show than the ships' in-universe names on toy boxes if you want them to sell.
Click to expand...

I can’t wait to buy Dark Vader and Hans Solo.

RPF PREMIUM MEMBER
I loved watching the two duke it out in the rain without weapons. It was well choreographed and screamed Indiana Jones. The fact that it was also sloppy lent to its realism. It would be really, really cool had we seen Jedi do more hand to hand combat in the PT and hopefully it will work it's way into the Kenobi series. The Clone Wars Micro series actually did this very, very well too and it's one of the many reasons I adore it.

That does not even make sense ...

Darth Lars said:
That does not even make sense ...
Click to expand...

I mean that people get the names wrong, regardless if they’re mentioned, main characters, etc.

I heard Disney's renaming that film: "Attack of the Genetically Identical, Yet Equally Special".

Marvel’s End Game has been renamed to Final, but Finals scare college kids, so it has also been renamed to Last. There is no Last place anymore, so End Game can now be referred to as Participation.

Man this is boring