Jamesfett said:
Okay love the trailer but what is up with the mystery sorcerers stuff? There is no way these people don't know about the Jedi and them not knowing about Yoda's species has always seemed odd. It has not been that long. Only five years since the Empire's end and everyone would know who the Empire destroyed to come into existence.

Also Daniel Logan is about the same age Boba Fett would be and Temuera Morrison is about twice the age he should be. Still Bob a appearing awesome.
Click to expand...

Once the Empire started, they worked hard to not only eliminate the Jedi but also used propaganda to erase their history and what they truly were. So from that time to the A New Hope, then through Return of the Jedi, then to Mandalorian, that's close to 30 years. The other thing is that for most of the Galaxy, they never saw a real jedi, just the stories.

The Mandalorian themselves have a rocky relationship and I take it that certain clans still hold grudges.

Great trailer for sure!! Eager to see where all of that stuff leads to

RPF PREMIUM MEMBER
Excited as Ever!... Loved it, worth the Wait!

RPF PREMIUM MEMBER
That trailer is like a portfolio of my work. And it barely showed anything. This season is going to be really good. I wish i could say more. I'm so excited to see what you guys think about the sets.

Mara Jade's Father said:
Once the Empire started, they worked hard to not only eliminate the Jedi but also used propaganda to erase their history and what they truly were.
Click to expand...

Sorry in advance for politics....

Mando trailer immediately reminded me of this! 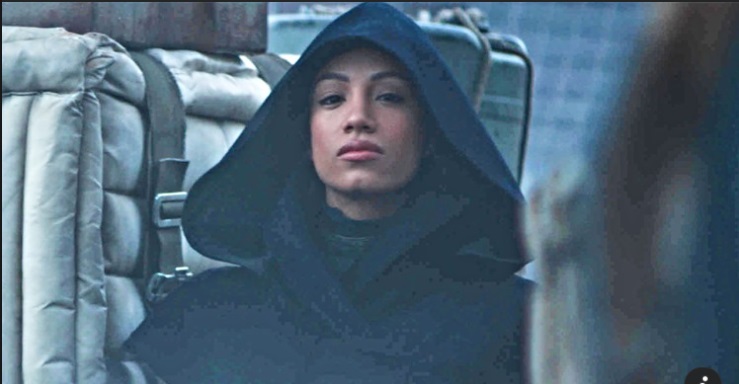 What actress is that?

Looks like Ashoka with a disguise to me. Looks like her head tendrils(I don't know what they are called) are wrapped in a black cloth that matches her cloak. Probably has make up to hide her markings. I'm guessing that is Rosario Dawson.

coolhanluked said:
What actress is that?
Click to expand... That's Not Ahsoka Tano in ‘The Mandalorian’ Season 2 Preview, So Who Is It?

The first footage from ‘The Mandalorian’ season 2 includes wrestler Sasha Banks and some fans think it's Ahsoka Tano.

RPF PREMIUM MEMBER
She reminds me of Barriss Offee.

Treadwell said:
She reminds me of Barriss Offee.
Click to expand...

IIRC Barriss was killed in TCW by Anakin during the Asoka/Jedi trial arc.

At least now we know The Child is a boy.
Mando says "Where ever I go, he goes"

James Kenobi 1138 said:
IIRC Barriss was killed in TCW by Anakin during the Asoka/Jedi trial arc.
Click to expand...

My memory's fuzzy but Wookiepedia says Filoni WAS going to kill her but cut the scene.

(I don't have a strong feeling it is her, just an observation)
Last edited: Tuesday at 1:58 PM

RPF PREMIUM MEMBER
Many people are still not sure she's Sabine simply because Sasha is not Asian, and Pablo has clearly stated Sabine is. So we'll see. (OK shes Mandalorian but... you get it)

I thought the rumor from a couple months ago was that Sasha Banks was playing Sabine. SO, at least one part of that rumor (that she is in the show at all) is true. I guess we'll have to wait and see if she is playing Sabine, or if that was just someone grasping at straws of who could play once they found out she was cast in the show.
You must log in or register to reply here.
Share:
Facebook Twitter Reddit Pinterest Tumblr WhatsApp Email Link
Top