Kylash said:
Many people are still not sure she's Sabine simply because Sasha is not Asian, and Pablo has clearly stated Sabine is. So we'll see. (OK shes Mandalorian but... you get it)
Click to expand...

Based on the her appearance in the trailer and the narration at that time, it seems as if we are to believe she has something to do with the Jedi.

russellsch said:
At least now we know The Child is a boy.
Mando says "Where ever I go, he goes"
Click to expand...

That was confirmed in Episode 3 when the Doctor who was supposed to be dissecting him refers to the child as him/he.

"I was protecting him."

CadetTK2386 said:
I thought the rumor from a couple months ago was that Sasha Banks was playing Sabine. SO, at least one part of that rumor (that she is in the show at all) is true. I guess we'll have to wait and see if she is playing Sabine, or if that was just someone grasping at straws of who could play once they found out she was cast in the show.
Click to expand...

A lot of times those rumors are wishful thinking or simply trying to connect two pieces of info. They probably know she had a part and that there was also talk of the Sabine appearing on the show. So they tried to make a connection. Not saying one way or the other. Not quite the same circumstances but II am just reminded of how some many people were convinced Keri Russell was going to be Mara Jade. Hey... Maybe Sasha is Mara Jade.


I wonder if while on Tatooine the child will (through the Force) lead them to Kenobi’s old house, where Mando will find some answers.

RPF PREMIUM MEMBER
As long as they keep away from known characters and events as much as possible then this show has a fighting chance.

RPF PREMIUM MEMBER
At the end of Rebels, Sabine left with Ahsoka. We know Ahsoka is in S2.

Mara Jade's Father said:
Once the Empire started, they worked hard to not only eliminate the Jedi but also used propaganda to erase their history and what they truly were. So from that time to the A New Hope, then through Return of the Jedi, then to Mandalorian, that's close to 30 years. The other thing is that for most of the Galaxy, they never saw a real jedi, just the stories.

The Mandalorian themselves have a rocky relationship and I take it that certain clans still hold grudges.
Click to expand...

I don't buy that. I remember plenty of things from 30 years ago that weren't big things...pretty sure if jedi were a thing, i wouldn't forget them in 30 years time. For that to happen, you'd have to pretty much wipe out everyone over the age of 10 or so then destroy the references.

Great trailer, excited for season 2! Anybody spot Michael Biehn? I was hoping to see him in the trailer but looks like he wasn't in it.

cboath said:
I don't buy that. I remember plenty of things from 30 years ago that weren't big things...pretty sure if jedi were a thing, i wouldn't forget them in 30 years time. For that to happen, you'd have to pretty much wipe out everyone over the age of 10 or so then destroy the references.
Click to expand...

Great. Tell me everything you know about Yugoslavia... GO!

I'm guessing like any average person you honestly can't tell me much. Why? Because it wasn't a part of your life. You did not live there, you did not know people who did. It had no impact on your life. Yes, you knew at one time it was a country and maybe some other odd facts but you can not speak at length without doing some research.

Now... imagine that a powerful person spent the last 30 years wiping out all the info about Yugoslavia and you could not find any true info about it. In fact, not only has the real info been deleted from the web and documents around the world but had that info has been replaced with incorrect information that was all deceptive and intentional meant to mislead. Additionally, people who did remember were killed off or so scared into silence as to never reveal any real info about the defunct country ever again.

See, you watched all these Star Wars movies and TV shows so you know the Jedi. So yes, you know about them but the average lifeforms in the galaxy never met a jedi nor did they have any real direct impact on their life. Anything they ever heard were stories. And then the next 30 years they were then told that not only what they heard was wrong but they were also corrupt and were not the great and powerful people they tried to pretend to be.
Last edited: Sep 15, 2020

Does any one else got a NuBSG vibe in the first scene? With the way it's shot and the bell music?

cboath said:
I don't buy that. I remember plenty of things from 30 years ago that weren't big things...pretty sure if jedi were a thing, i wouldn't forget them in 30 years time. For that to happen, you'd have to pretty much wipe out everyone over the age of 10 or so then destroy the references.
Click to expand...

George forgot to watch the OT when he wrote the prequels. How does Obi-Wan age like 50 years in the time it takes Luke to turn 18? Why does the imperial officer say “your ancient religion” and “sorceror’s ways” in ANH? Because the prequels don’t mesh with the OT.

The SW universe is massive, thousands of star systems with dozens of planets in each system. The jedi kept peace in the main populated areas of the galaxy, the planets with large political presence, etc. Shmi Skywalker lived on Tattooine and said "the republic doesnt exist out here." So that means the jedi rarely showed up around those parts, if at all.

Not every planet knew of jedi, maybe they heard stories, and chose to believe they were true or not. Anakin asked Padme if she was an angel, and she laughed at the question as if she had no clue what he was talking about. He said he heard deep space pilots talk about them.

The imperial officer called it "ancient religion" because he knows it was popular a long time ago. If Kenobi says the jedi were around for over 1,000 generations, there may be people who would say "that's such an old way of life, anyone who follows it today is nuts!" Especially since the jedi were all taken out and its been nearly 20 years since anyone has even seen a force user in public.

Han was around the galaxy for about 30 years before meeting Luke and Obi Wan and learning that the force was real, he didnt believe it even if he did hear about it. It all comes down to believing the stories, because there's not enough evidence to prove the jedi were real. If there's no proof, the people who were young during Order 66 will just have nothing but faint memories of jedi. Even then, there's probably punishment for speaking about such "troublemakers" so the jedi are swept under the rug in 3 decades.

SW doesnt really *need* force users to be SW. In Episode VII, Han was dealing with lots of scoundrels from all across the galaxy, and none of them were jedi. Proving this universe can have hundreds of characters who can live a full life and not mention the force, just doing other things in space.

I havent watched a full season of Clone Wars, and I havent watched any of Rebels, so I'll be a bit lost on who these live action cartoon characters will be. I like how they want to connect the cartoons to live action, but it shouldnt be to The Mandalorian. I was hoping this series would pull away from the force and focus on characters who live without being bonded to the Skywalker saga. Like, actually expanding outward instead of making the galaxy feel like its the size of the hollywood backlot, where every 10 feet is something recognizeable and famous.

I enjoyed season 1 and hope season 2 is just as fun, but if it does just wink at the camera to show "its all connected" I'll have to live with it. It would be cool to see some jedi, but only if the action is brutal and something fresh.

I LOOOOOVE the first season but I'm afraid they are going to kill my interest in the show by not letting it be it's own thing. I don't need a bunch of call back characters. I don't want to see ANY Boba Fett. I'm sorry, but Fett is overrated as a character. This show is called "The Mandalorian" Not "Boba Fett". I loved the first season because it seemed to be it's own thing set in the Star Wars universe with new characters not tied up in old stories. Now it looks like they are just bringing in as much stuff from the previous films and cartoons as possible and that's so disappointing. I hope I'm wrong and the series stays strong but I feel like now it's "Well, you gotta go watch the cartoon to understand this.. " ugh.

That is 100% Sabine. That was a pretty damn good first trailer.

This show was developed from scripts created for a show about Fett, was it not? I was surprised we didn't see him in the first season. I don't expect him to play a big role in the overall storyline.

I think there is plenty of room for this show to be it's own thing, and dip it's toe into the larger mythology.

Noeland said:
I was surprised we didn't see him in the first season
Click to expand...

Well, we might have seen his feet, we just don't know yet.

RPF PREMIUM MEMBER
I know ashoka is played by Rosario Dawson. So that is probably Sabine. Katee sackhoff is in it too. I ran into a few people on set that will be a nice surprise.

Lightning said:
Well, we might have seen his feet, we just don't know yet.
Click to expand...

I thought that was supposed to be Moff Gideon's feet. Didn't somebody match up his boots and cape from the later episode?

Noeland said:
I thought that was supposed to be Moff Gideon's feet. Didn't somebody match up his boots and cape from the later episode?
Click to expand...

Don't know, last I heard everyone was going on about spurs jingling.

Noeland said:
I thought that was supposed to be Moff Gideon's feet. Didn't somebody match up his boots and cape from the later episode?
Click to expand...

Here is a color corrected/brightened view of that shot. It's not Moff Gideon, in fact it looks like Din's costume. The boot, shin, thigh armor, and holster all match up. Since it doesn't make sense for Din to be "Sneaking" back to the body, plus the intentional addition of the spur sound effect, has lead many people to assume that Din's costume was simply used as a Stand In for another character, possibly Boba based on the Spur sound, but it could also be another character we'll see when they return to Tatooine in Season 2. 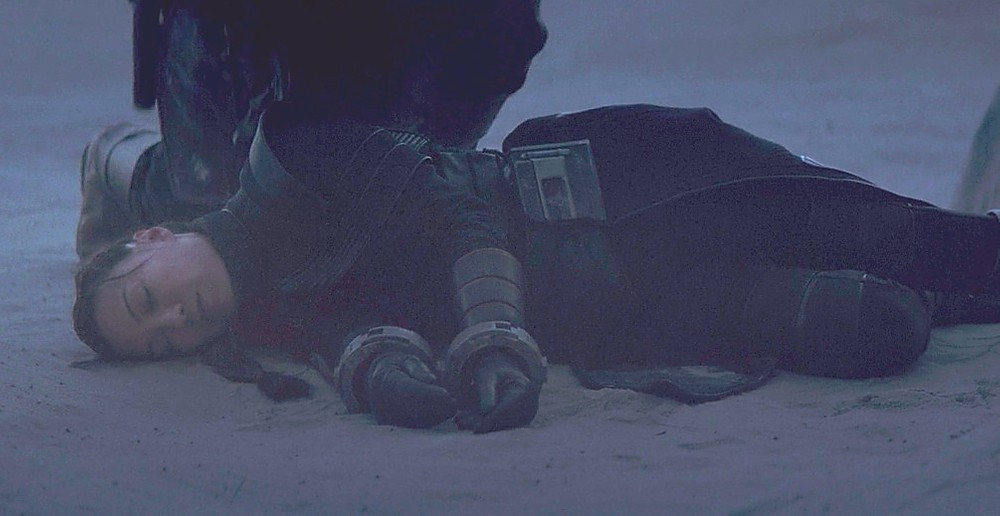