Thank you thank you, just hoping I can get it all finished in time before December AND befire my daughter out grows it....lmao

So I got myself an early fathers day gift....lol Been wanting to get an airbrush setup for what seems like forever just never found a decently priced one and didnt want to go all overboard since Iwon'tuse it everyday. So i pulled the trigger and so far it's doing what i want it to do. It is so far an easy way to get some shading onto areas I wouldn't be able to with the old rattle can or brush. I went ahead and added some shading to areas on the jacket just as they have on theirs in the show. Happy with the outcome! 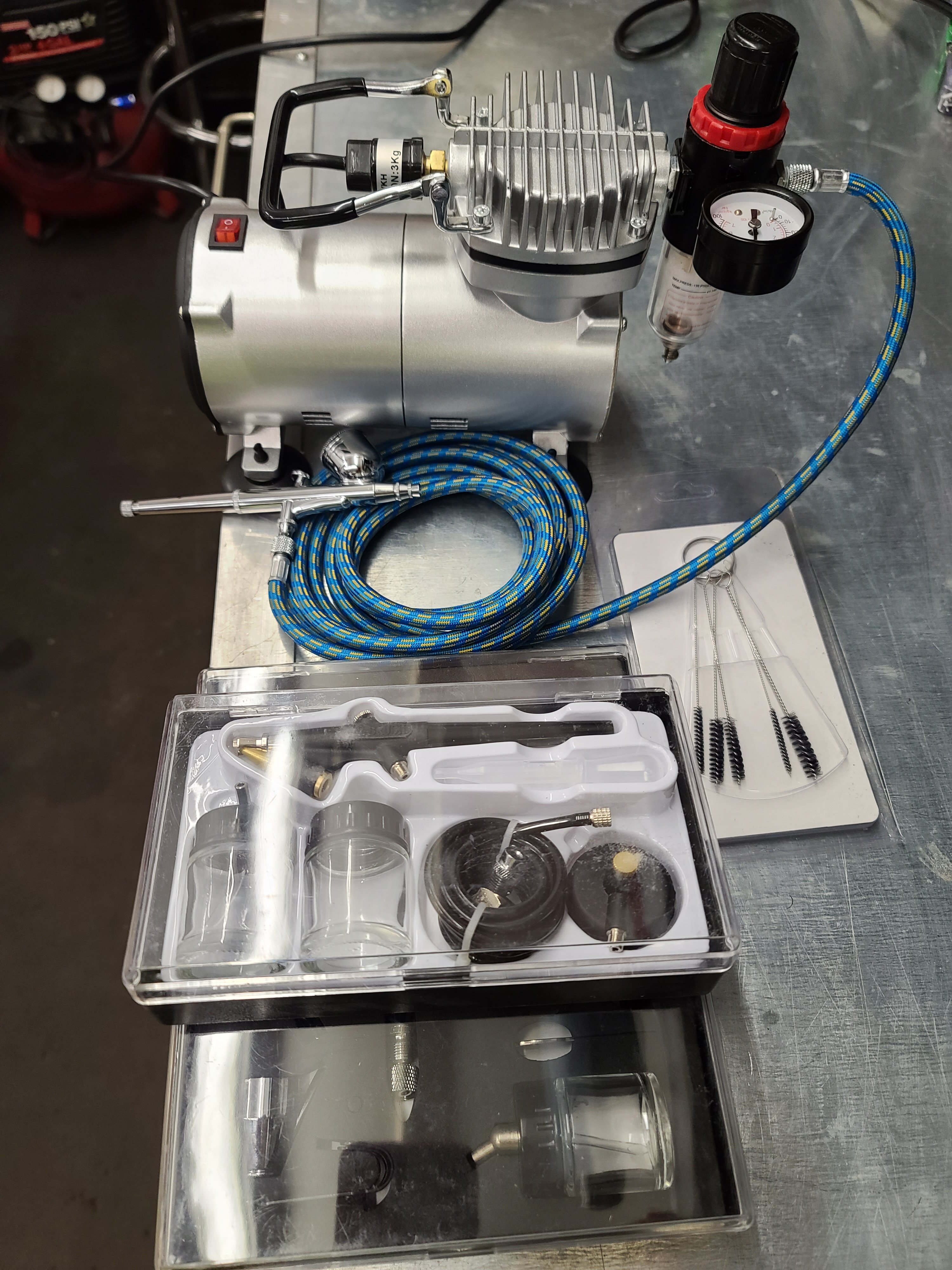 Shading outback really makes the other blues stand out a little more. My lighting might need a little work as it doesn't give it full justice....looks like a winner to me at least! 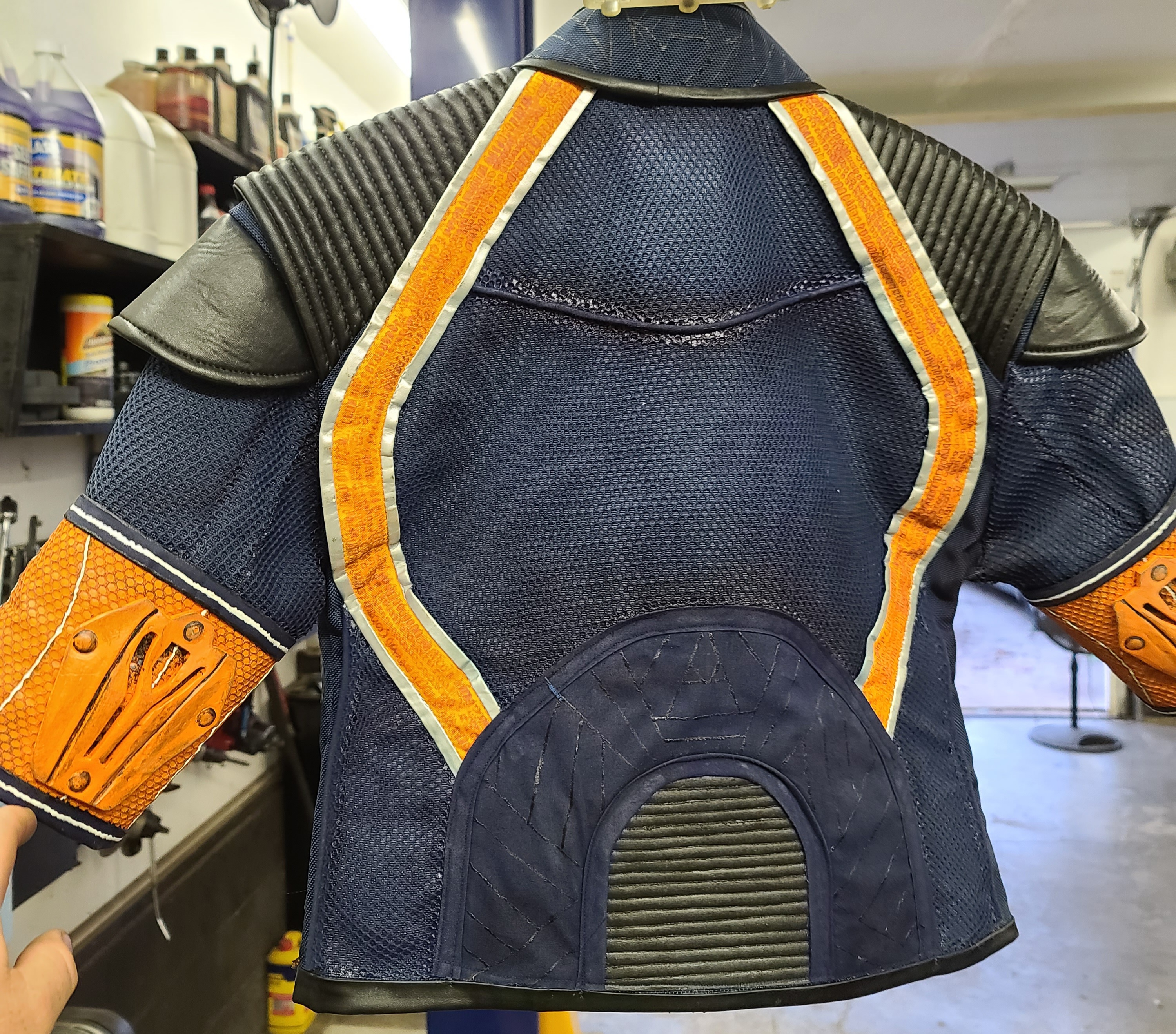 and now the front which didn't require too much.....will try my best to soon start the rest of the sleeve and finish up a few key points on jacket. For now it is starting to take shape and REALLY want to get pants, gloves, belts going so I can get them done on time. Tons of work and little time left! 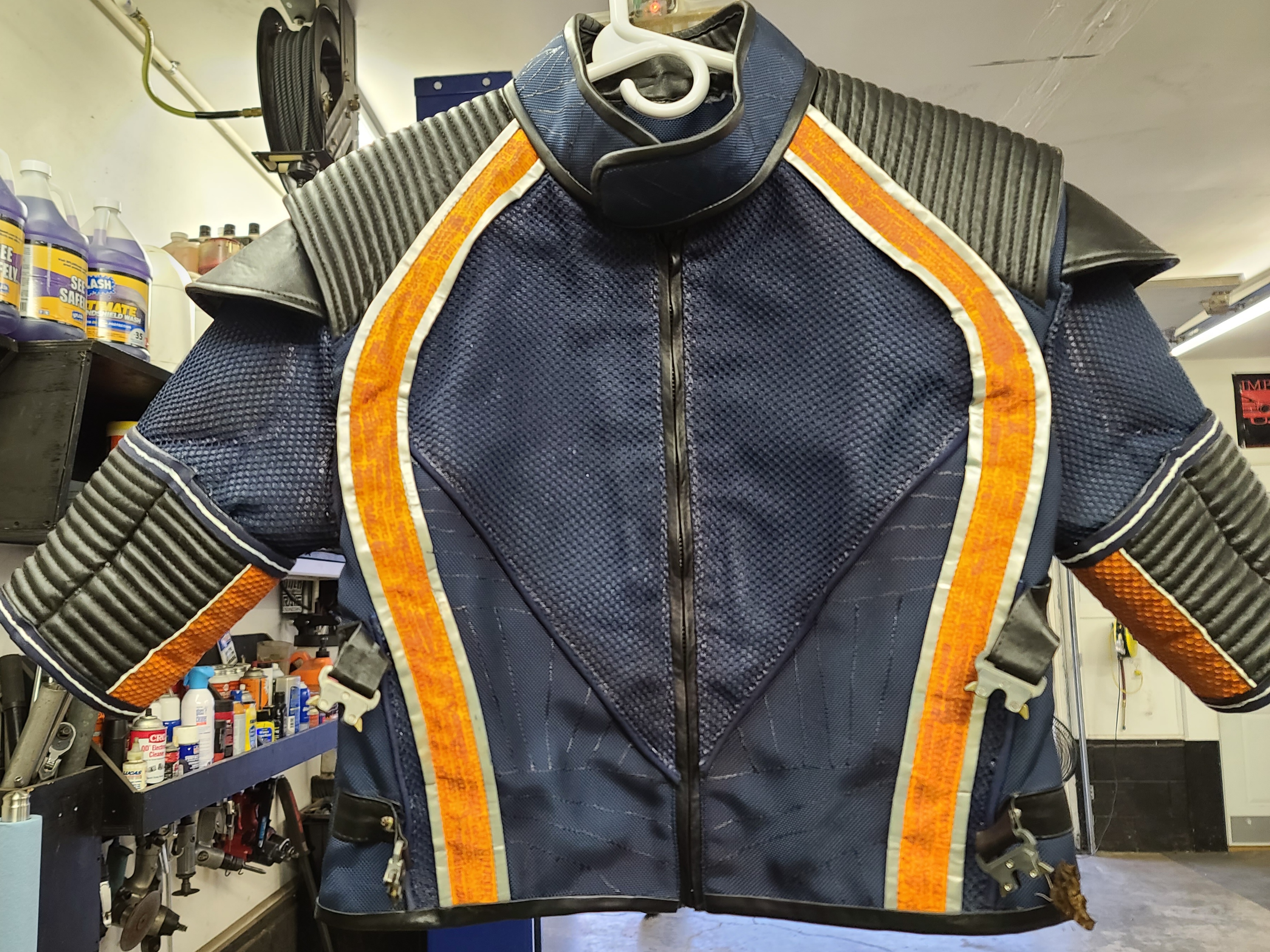 For now it's night night time as it'll be yet another busy week at work....Rain day would be SUPER NICE to have as I could get this further ahead....until then, be back soon!! lol

Ah yes; an airbrush is one of those tools you`ll need for many kind of project. Looking good, btw

well well, back to life again....battling away every little second I can against all the things trying to keep me from working on this darn costume!!! lol
So I've been waking up at around 4am and little by little trying to get ahead as much as I can. So far I started working on the forearm pieces that I can only say I've truly struggled on but am going to get them done no matter what. My little one (Charlie)has been all over the place and not quite home for me to get exact measurements, so I've been struggling a bit on that department. I did the whole shrink wrap thing with duct tape and for the most part it sorta worked, except I sorta messed up a little on measuring certain areas. I will explain further down.....

So after a little research and youtube, I managed to somewhat replicate the forearm piece.....Above was my test pieces which first one was the one on the right. Sewing through into the foam/cloth (purchased at Walmart) I figured it would work except it didn't have the effect I wanted. Sooooo, after watching 2 videos I quickly learned that by cutting the foam in strips, it would give me the desired effect. 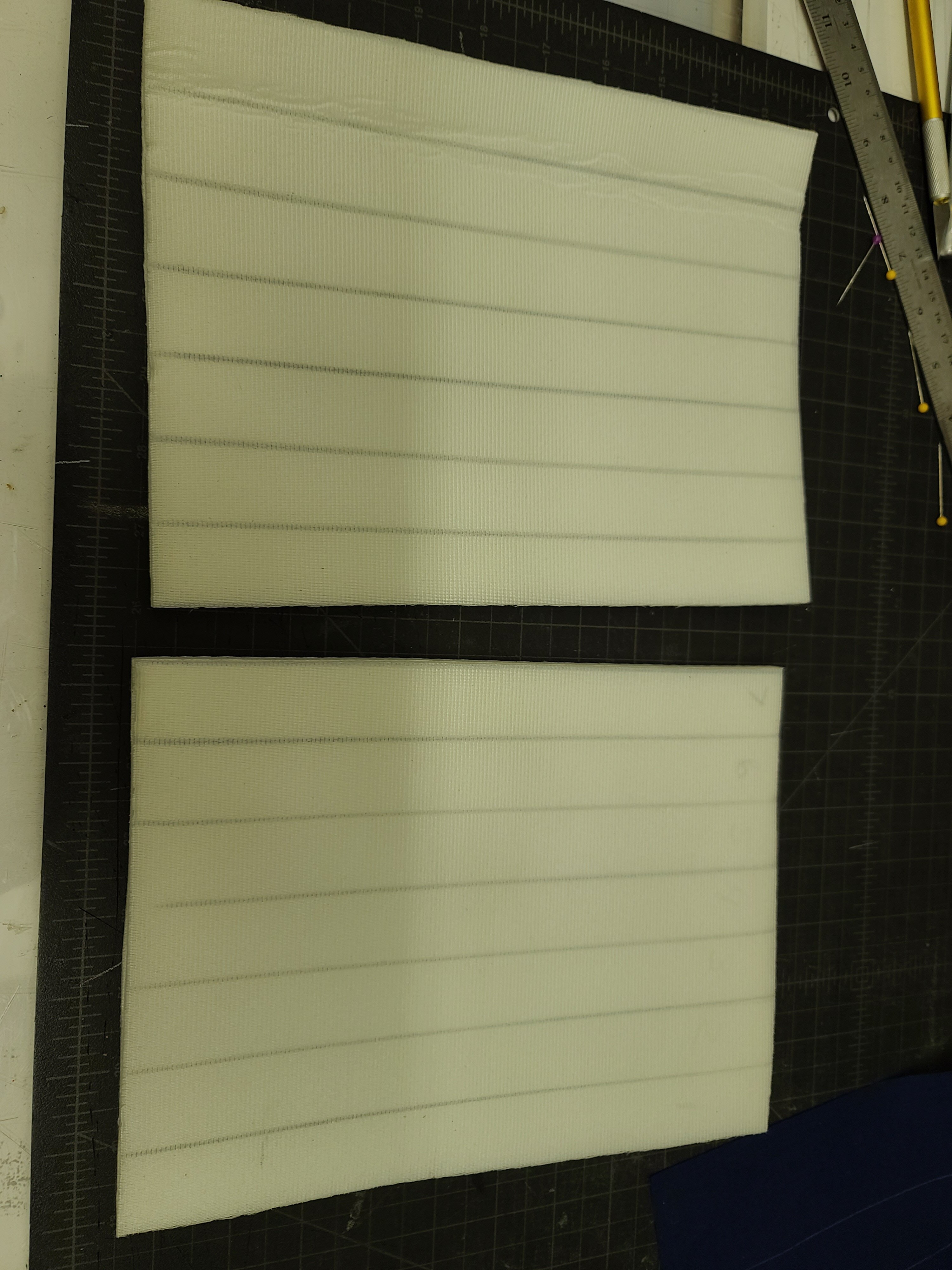 So I cut 7 strips for each arm and began spray gluing them onto the fabric......I wedged in between them as I glued all down and for the most part it helped tons to keep it in place. The end result was what I was hopin for.... 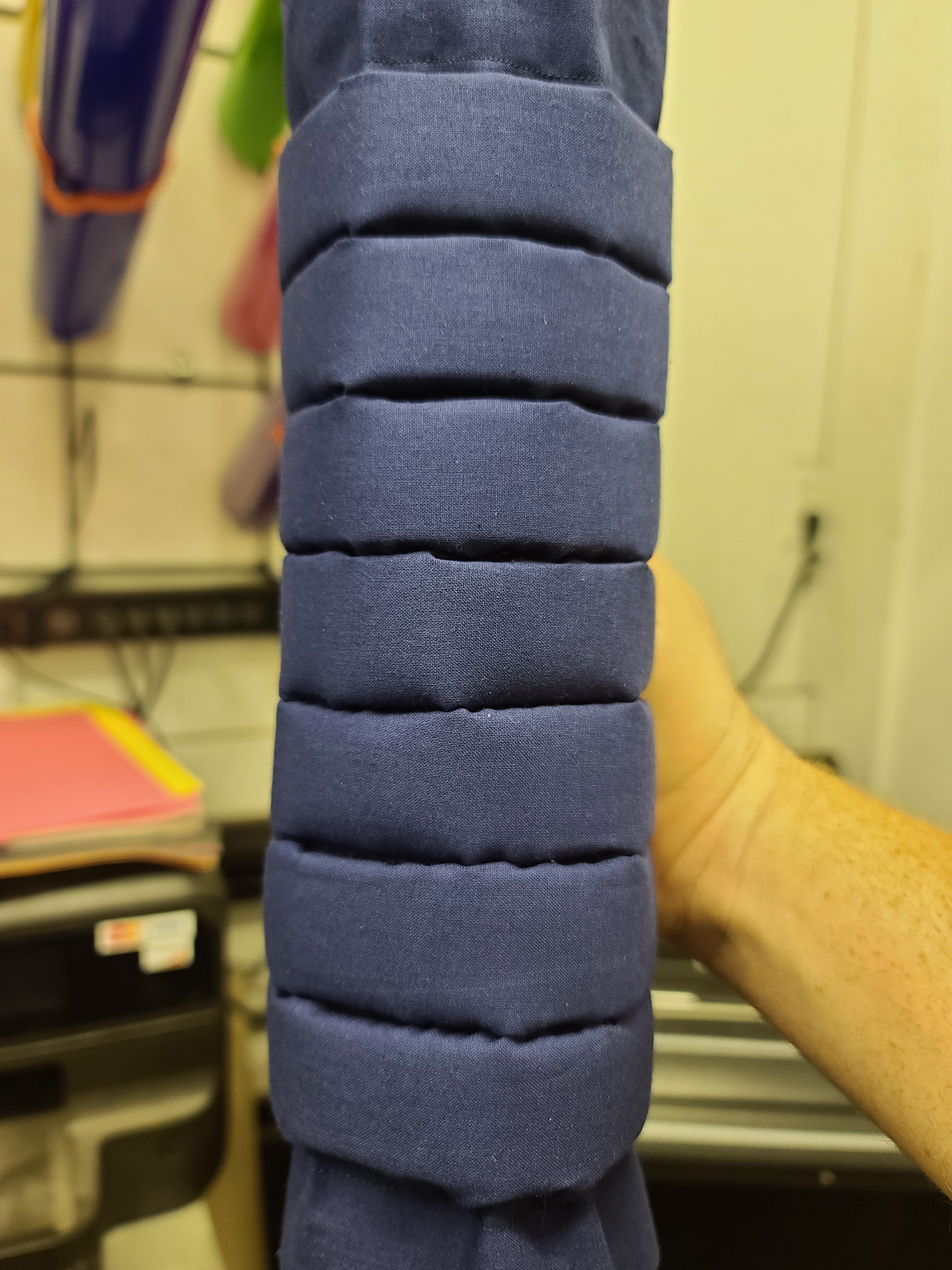 Once the fabric was put around a circular object it basically did exactly what I wanted it to do and looked pretty good....EXCEPT a miscalculation sorta put me in a position that in the end I had to live with. It seems that on the pictures I used for reference, 7 pieces show on Penny's arm.....which is exactly what I replicated. The huge problem was that I replicated them as per picture without considering that Charlies arms are short!!!!
As i'm sitting there cursing my head off (I JUST PUT SO MUCH TIME INTO THIS) the thought of having to redo them and set myself back was just not going to be possible. So, as much as I hate it because I just couldn't keep them long, I had to settle for the short version of them....only 4 rows instead of 7.....which youll see down towards end of this post.

Moving on, I started working on the parachute cord area and at least those managed to be a little simple. 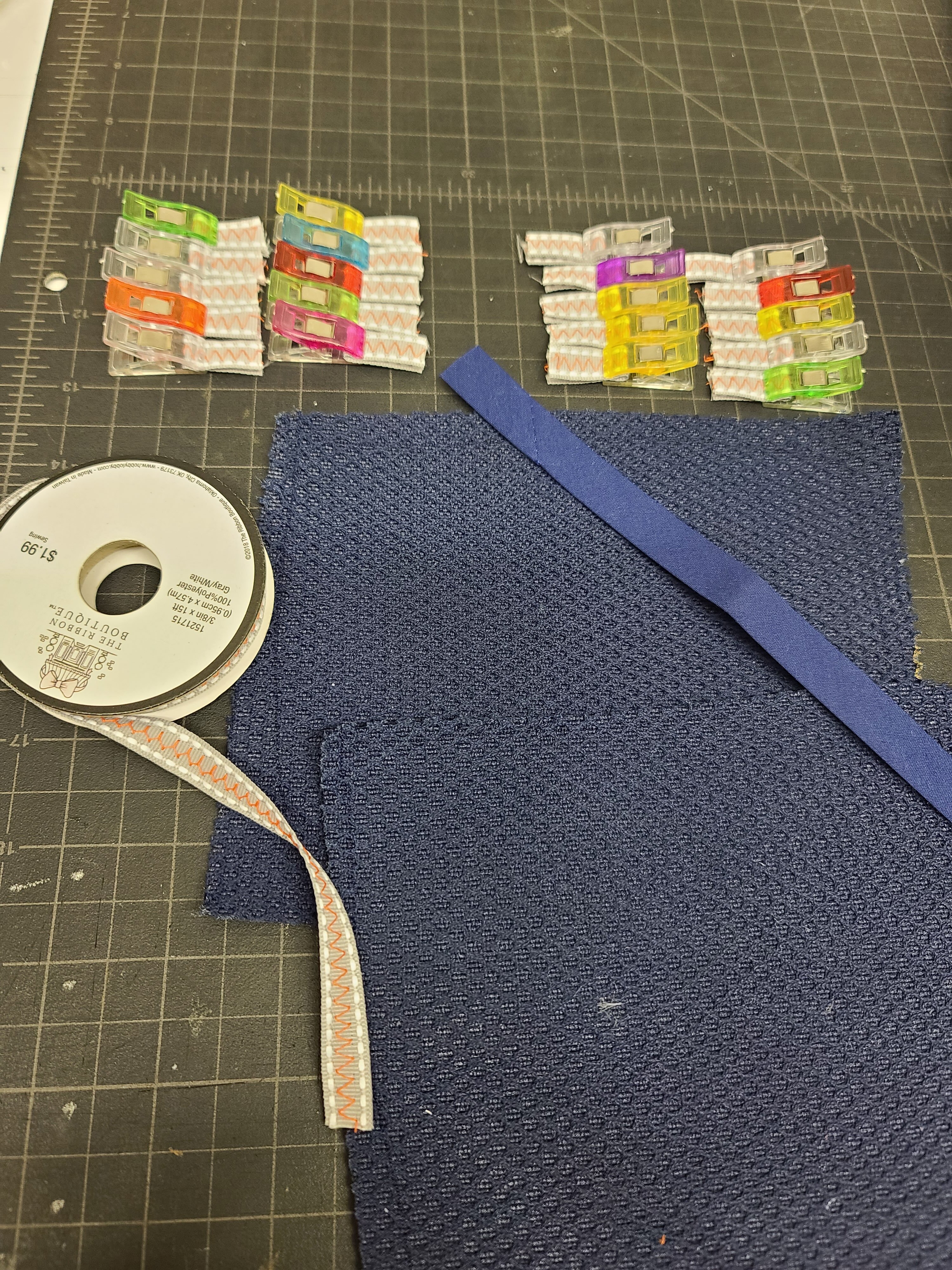 I took same steps as before except this time I managed to also sew around the entire thing before sewing on all the smaller pieces. Lucky me I had decided long ago to sew the orange onto the gray/white ribbon or that would have also taken forever. This time all I had to do was cut them and hold them down and still have plenty left over. 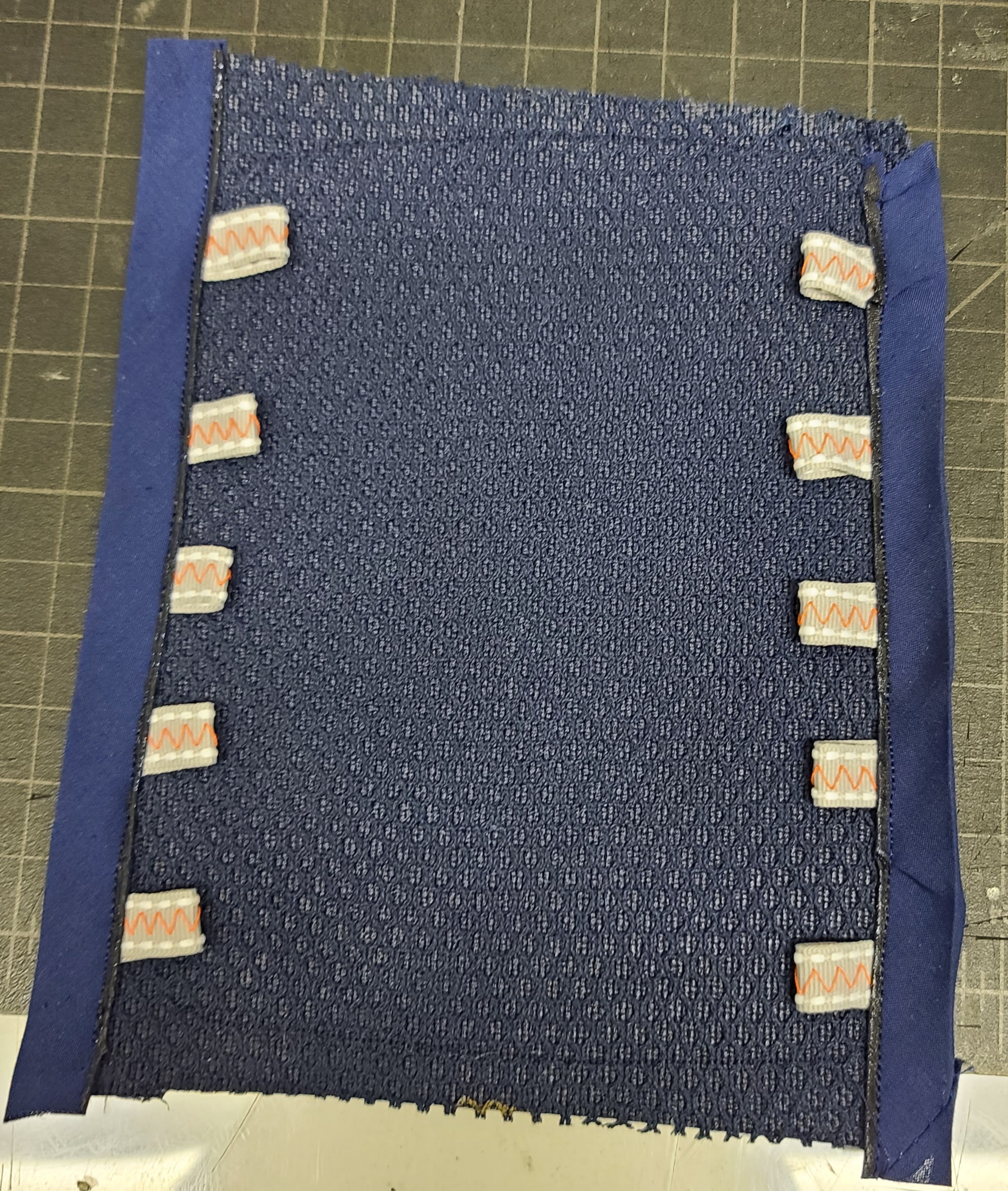 end result was pretty good minus a couple that tried getting away from me but all is secure and likely to withstand some abuse. The next step was to get the parachute cord on. 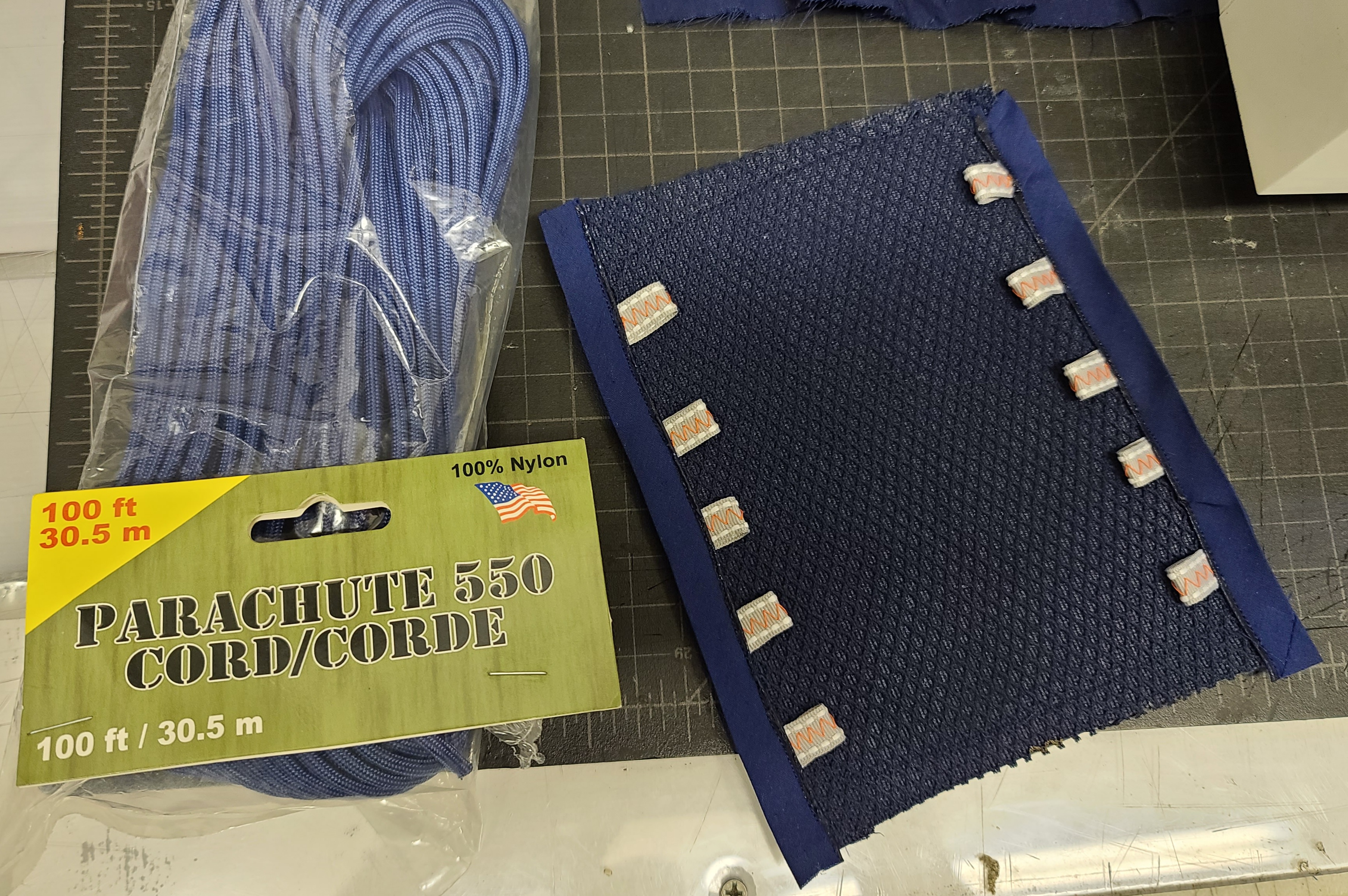 Once I had that all done......I began the painful task of finishing the one side so I could have a better grasp on the second. I also meant painful in the sense that I stabbed myself almost 100 times trying to hand sew the new piece onto the elbow area. I used my 4lb. .008 Diameter fishing line I had purchased like 9 years ago (never went fishing with it...LOL) and the line worked beyond great. It allows for a stronger hold while not being as noticeable.....not as easy to work with as it likes to twist and turn but once you get through it the end result speaks for itself.

I am most happy with how it turned out...minus the little issue with the foam area. Sometimes it is better to move forward then trying to step back.....and I WANT THIS THING DONE ASAP!!!! lol 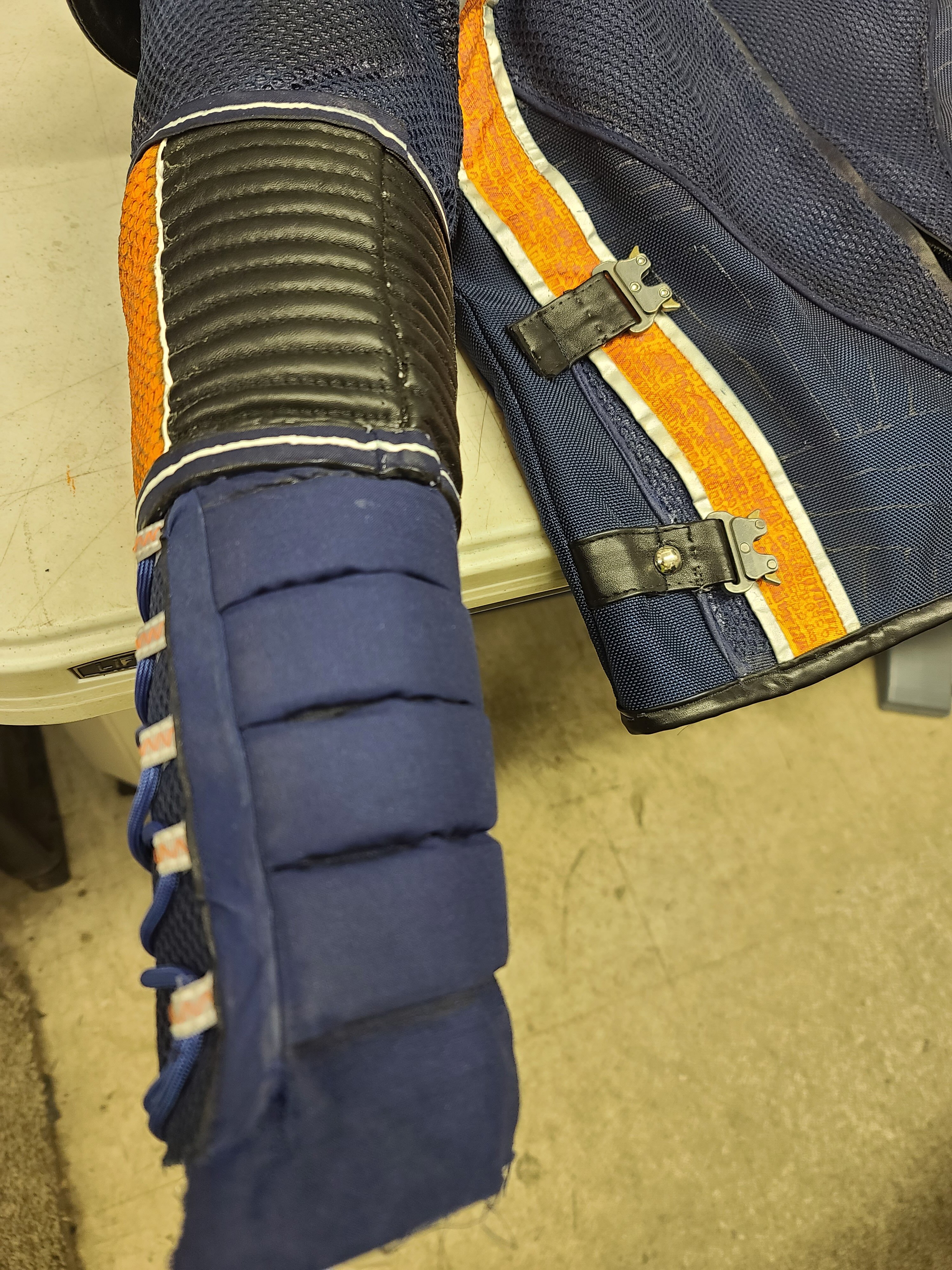 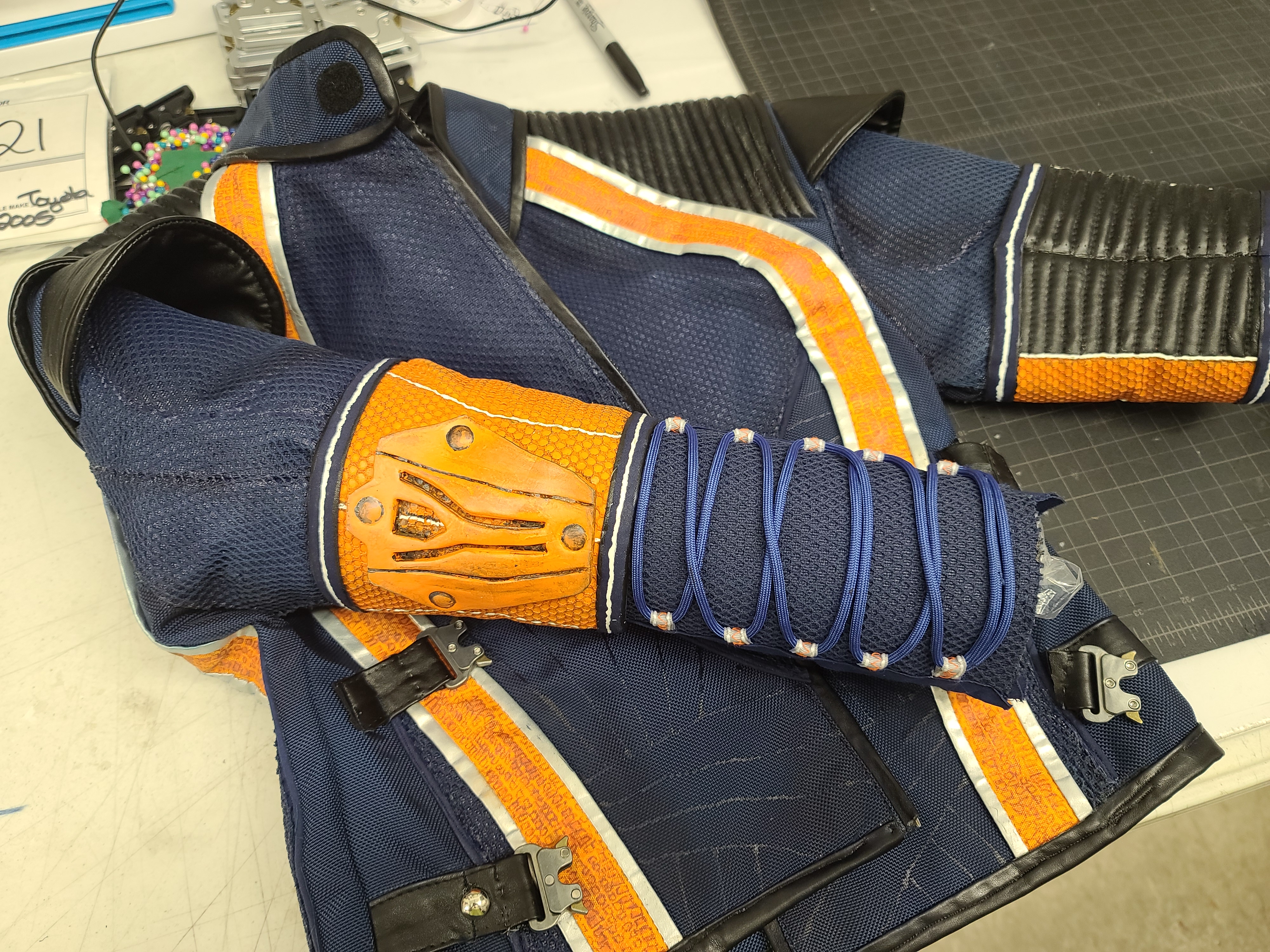 Only other thing I did after that was actually something I wasn't planning on but went ahead and did it. I had originally glued on all the fabric pieces and what not but after noticing a few things slowly pulling apart, I said the heck with it. I went and sewed in every single thing along the edges and anything that could potentially fall apart. Being that this suit was already pre-built, I couldn't sew all my stuff in like most people whom can build it from scratch. I am a little more satisfied with the end result and know that the pieces (if heat gets to them) won't begin separating.....which was and still is my fear when dealing with wearable fabrics etc.

I will update more as I truck on through this.....as always...STAY TUNED!!

Thank you thank you good sir and ohhhh yeah for sure. I kept thinking of every possible outcome and what all I'd have to take with us to an event if it all fell apart. The simple answer was to get my happy butt onto sewing machine to get all that attached properly.