Flyscriber said:
Ive cut the first test panel from a portion of the koolshade roll which wasn't up to scratch (too creased for main finished panels). I used an angle grinder with a 1 slitting disk, and the results were perfect first time. NO deflection of the vanes at all, actually it was no effort to cut, and the grinder just followed the template easily. I have no hesitation in recommending this method. Here are some pics of the cut koolshade panel.
Click to expand...

Hey Fly Scriber, I've definitely been taking notes on your build-up and Im going to borrow a few pages out of your book on my next Hero-TIE-Fighter build.
I was wondering if I could see a picture of the type/model of Angle Grinder tool that you used.
You got some really clean cuts on that KoolShade.
Thanks

greeble_gremlin said:
Hey Fly Scriber, I've definitely been taking notes on your build-up and Im going to borrow a few pages out of your book on my next Hero-TIE-Fighter build.
I was wondering if I could see a picture of the type/model of Angle Grinder tool that you used.
You got some really clean cuts on that KoolShade.
Thanks
Click to expand...

Yes it came out really nice with a slow and steady cut. I used some plywood under the koolshade and clamped the template over the koolshade and cut slowly through the metal in one steady pass making sure I was lifting some sawdust in the cut. That way I knew I didn't need another pass, which may have caught a previously half cut edge !
The angle grinder is just your standard 4 inch angle grinder with a 1mm slitting disk. 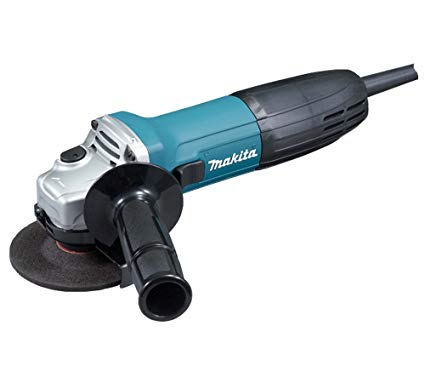 Ill post more after I get onto the main cutting session in the next few days.

Wow, bigger than I thought, That's a very clever way to tackle the Job.
I spent a pretty penny on my original Koolshade, (many years ago) been a bit nervous when it come time to cut it
I'm hoping to have enough extra to use on a 5 foot Falcon. .. no room for big mistakes

RPF PREMIUM MEMBER
Andy sent me these last night. I'm so excited to see the final result. There is a LOT of work going into these. Build log for the whole ship soon.

For those thinking of building one of these, there is still some original Koolshade available form my source. PM me and I will put you in touch. 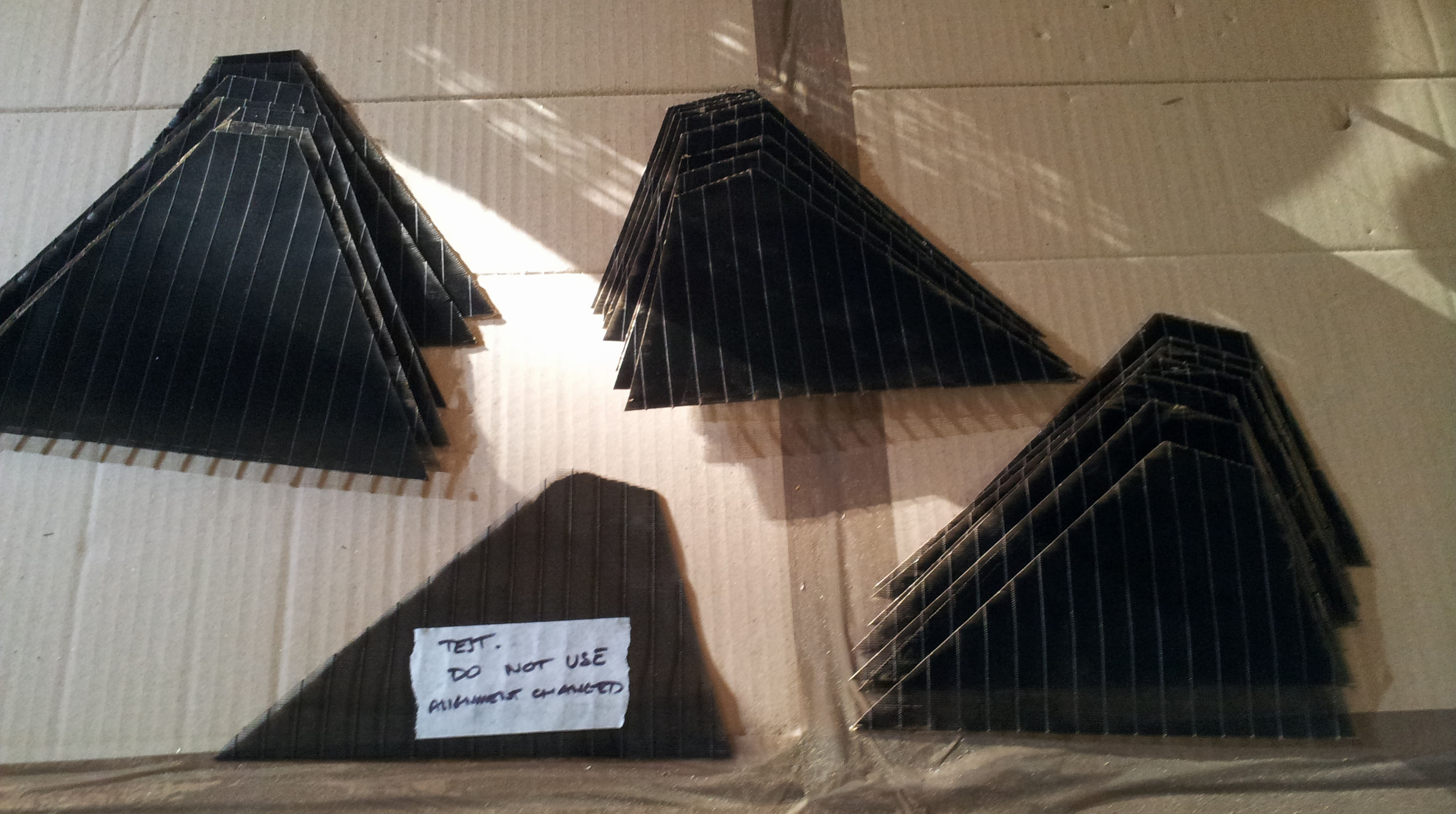 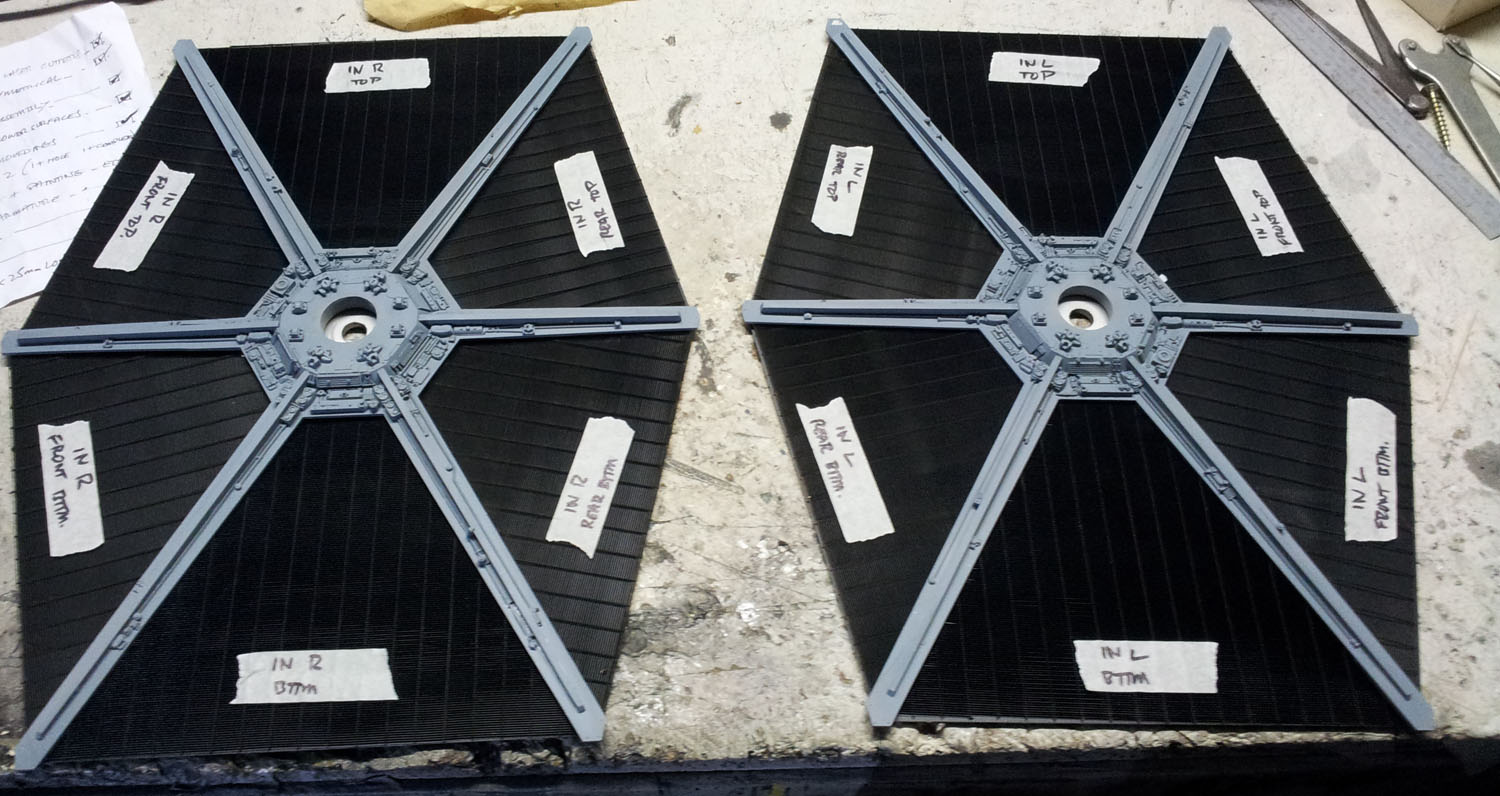 RPF PREMIUM MEMBER
Well its been a while since I posted, so here's the news from the last few days scary graft.
I found some old tape marks on the koolshade after washing and cleaning each piece after cutting. I tested some cleaning thinners on an offcut and found that it has zero effect on the original finish (maybe takes only the very surface off, but doesn't remove it), so I decided to use this to remove the tape marks, it worked well but it needed a re-spray in satin black which really made the panels shine.
Panels were fitted and aligned and taped into position.
The panels were then "stitched" into their recess using flexible black automotive bumper filler and pressed down whilst curing using the stainless cutting templates. This should stop any potential slumping of the koolshade over time, as it is fairly compressable in its ribbed (wire) direction.
Once cured the H strip was cut and added using the same filler in the inside edge of the channel, each one was pressed home to allow the filer to grip the koolshade outer edge and allowed to cure, then the next one added, and so on.
once the edges are done the wingstars were test fitted again and added. The same filler was placed inside the cut outs on the wingstars where the screws protrude and small amounts of filler in between to lock down the areas between the screws, my thinking is that the filler will be pressed down and under the edge of the screw heads. In order that the filler doesn't squeeze out through the coolshade and be visible, a channel was cut linking the screw recesses on the wingstar which should make any excess filler travel along it under the wingstar instead of coming out of the sides. This seems to have worked very well and the wings are super solid, no torsional flex in the H strip edges. So all in all im very happy with this result. Just some finishing and 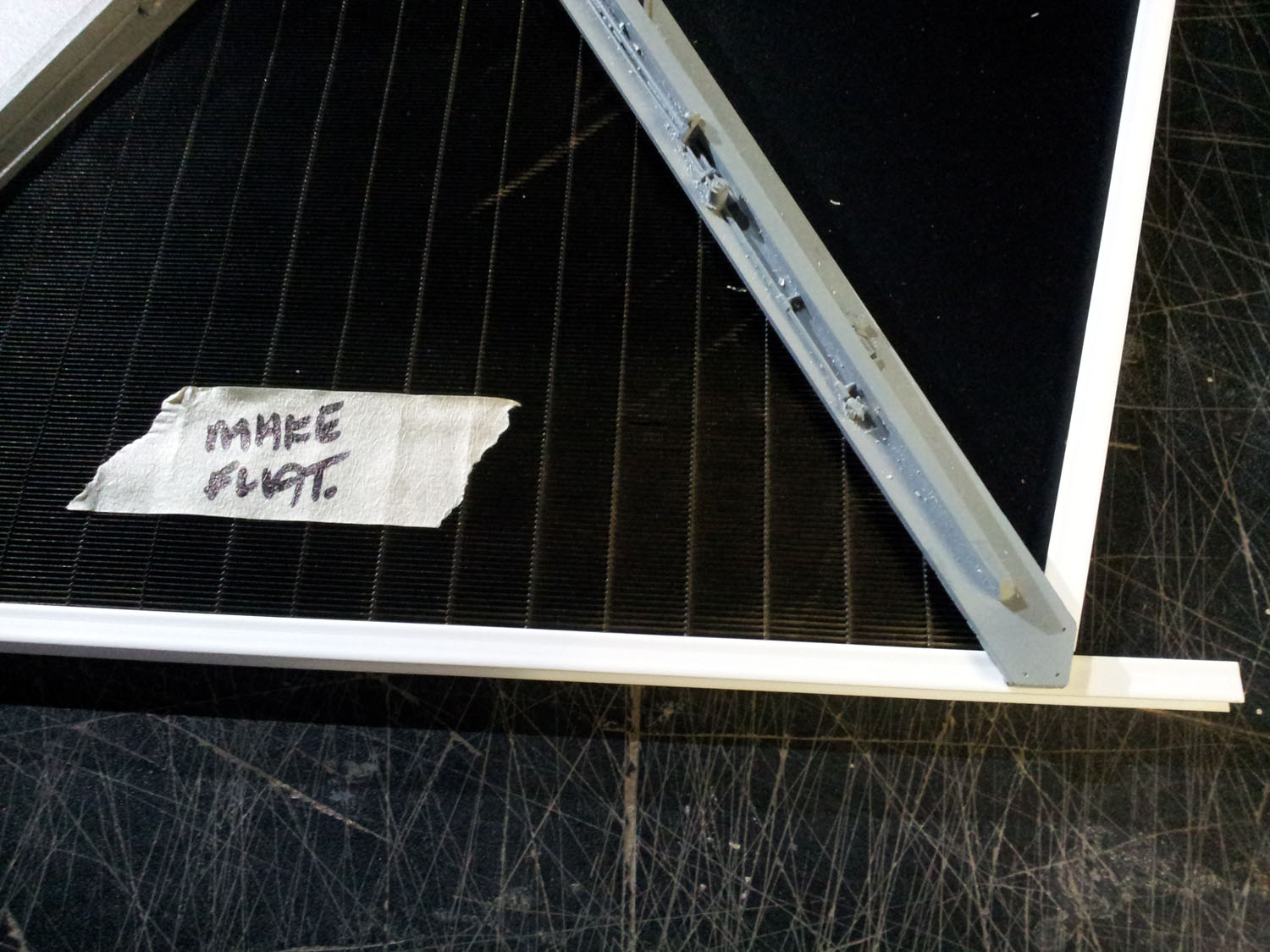 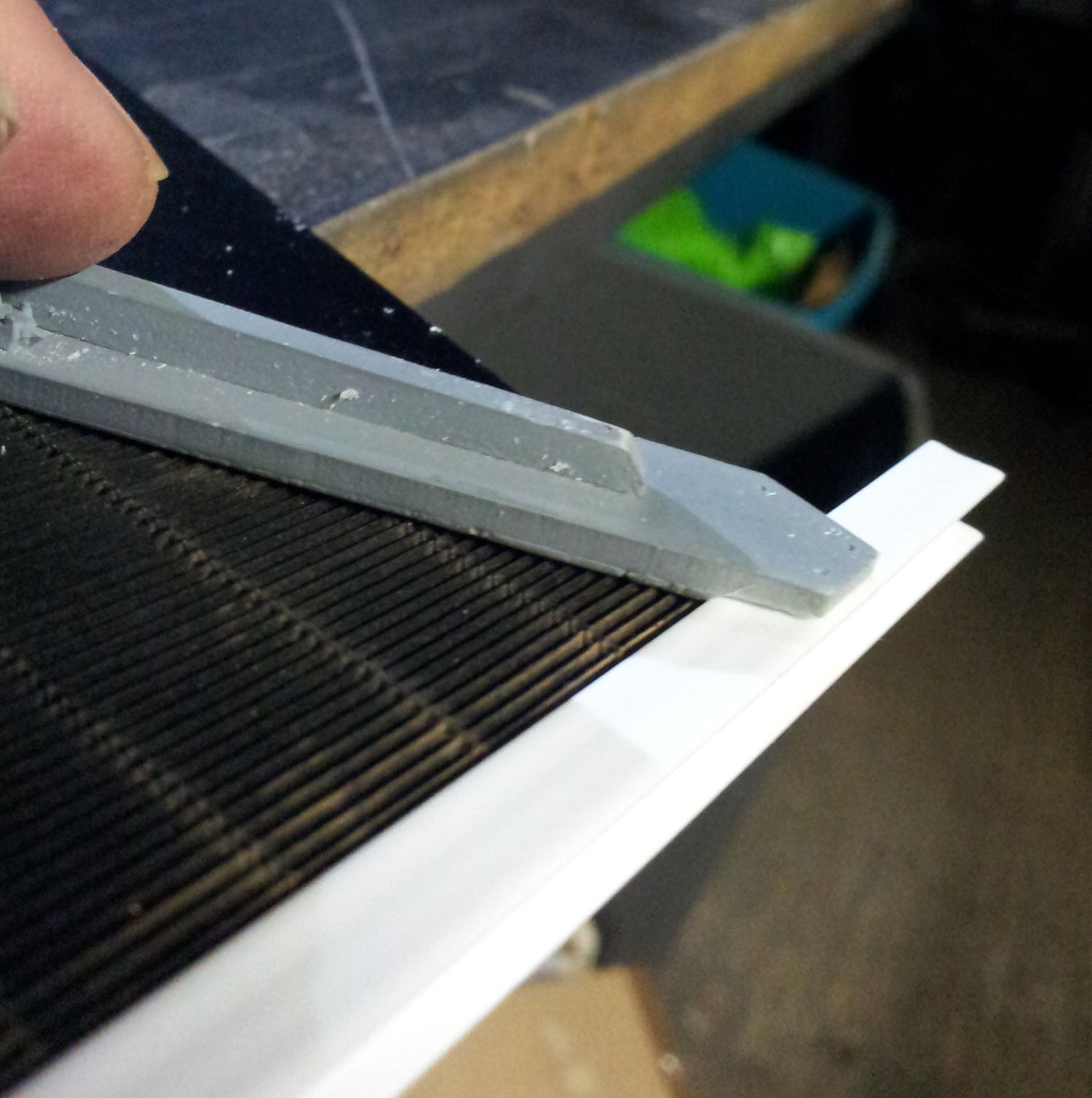 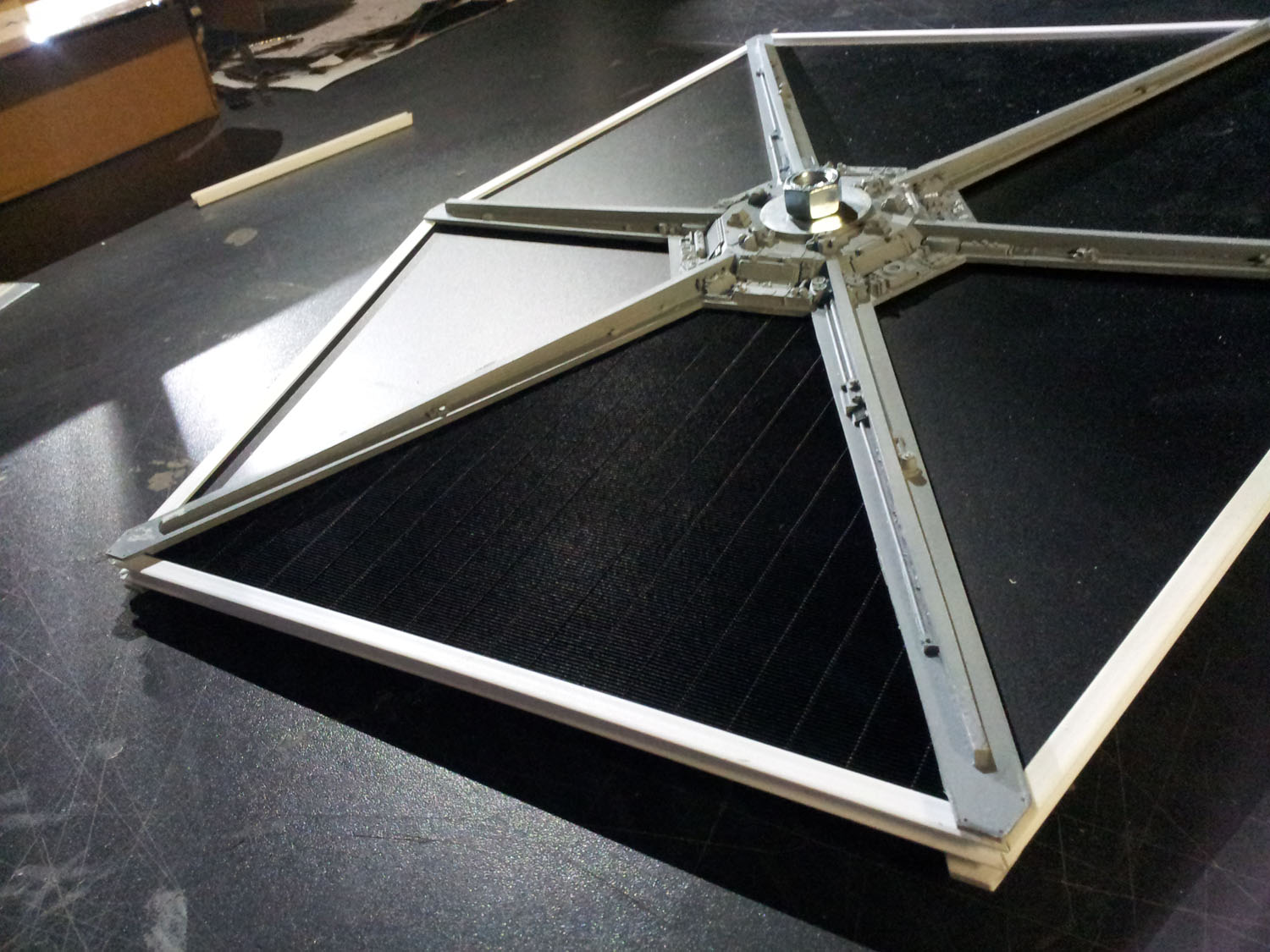 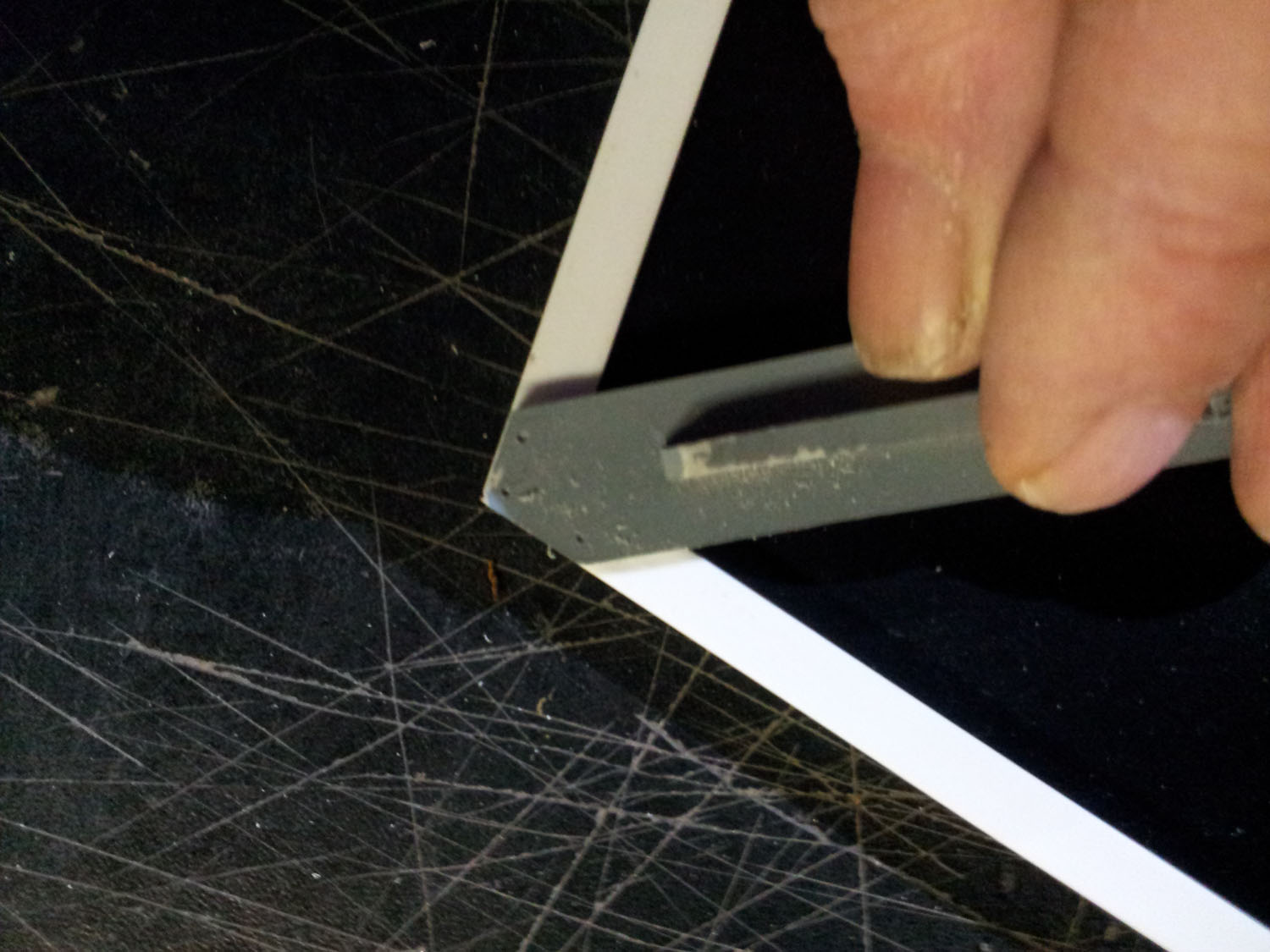 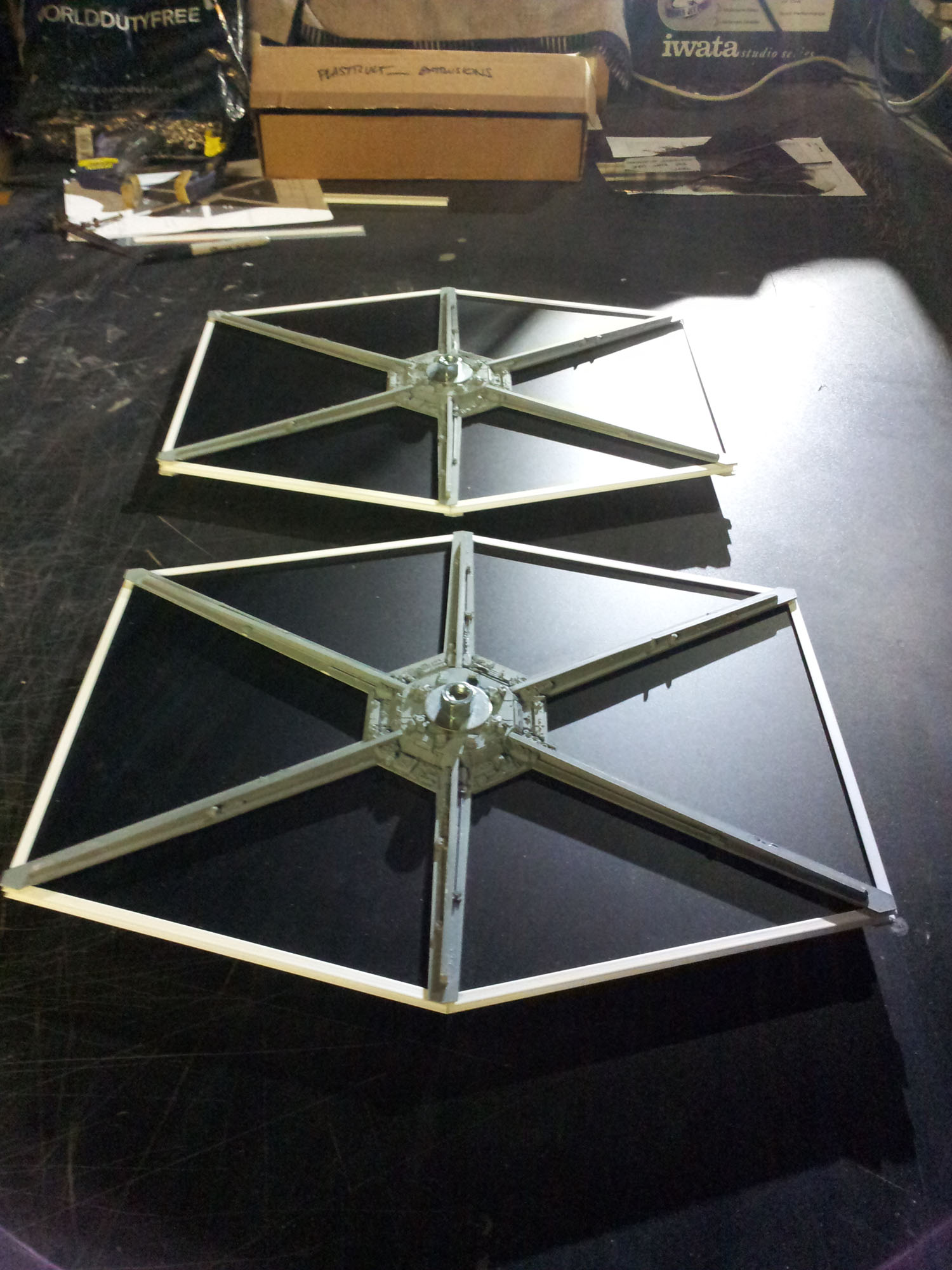 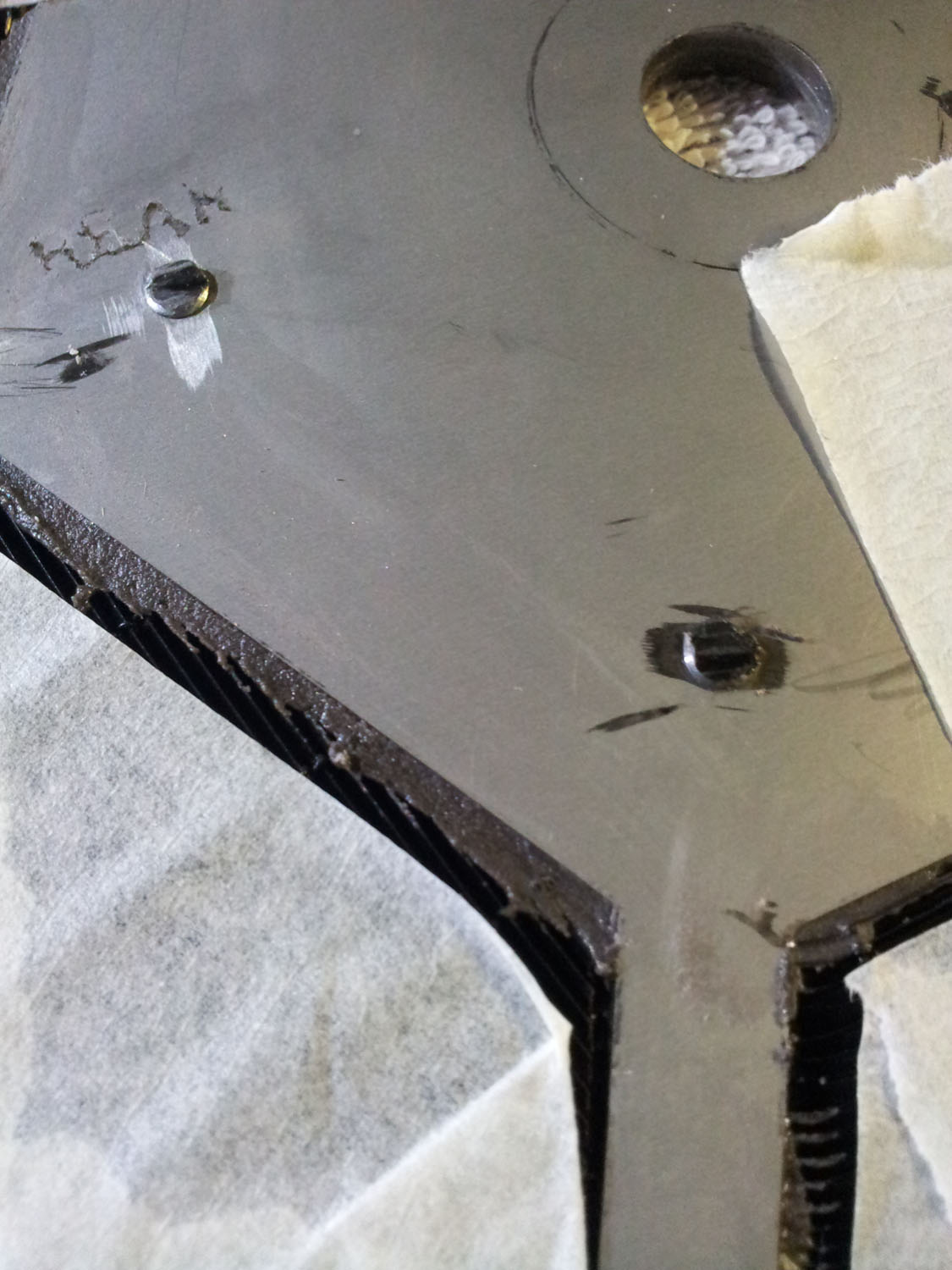 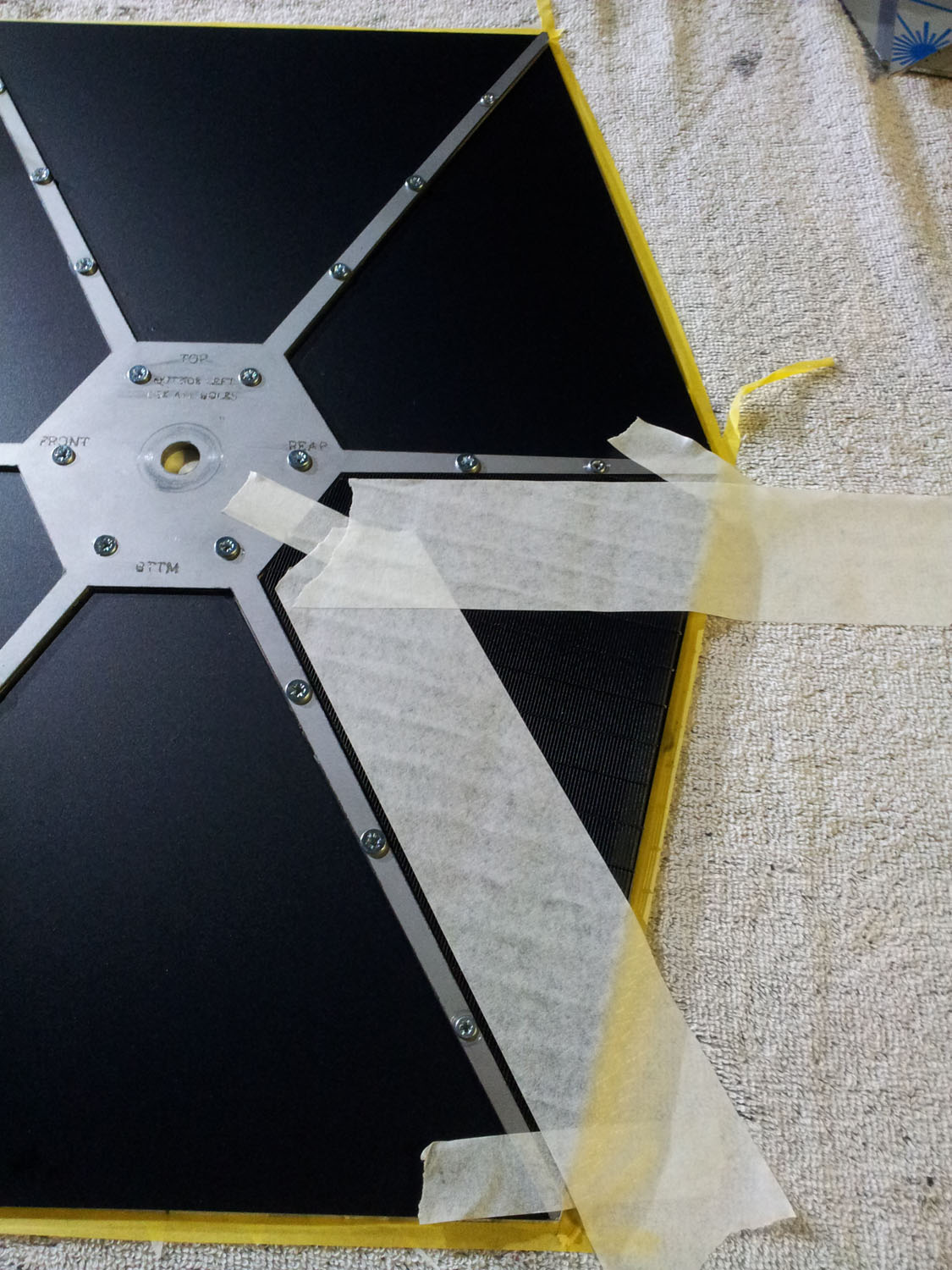 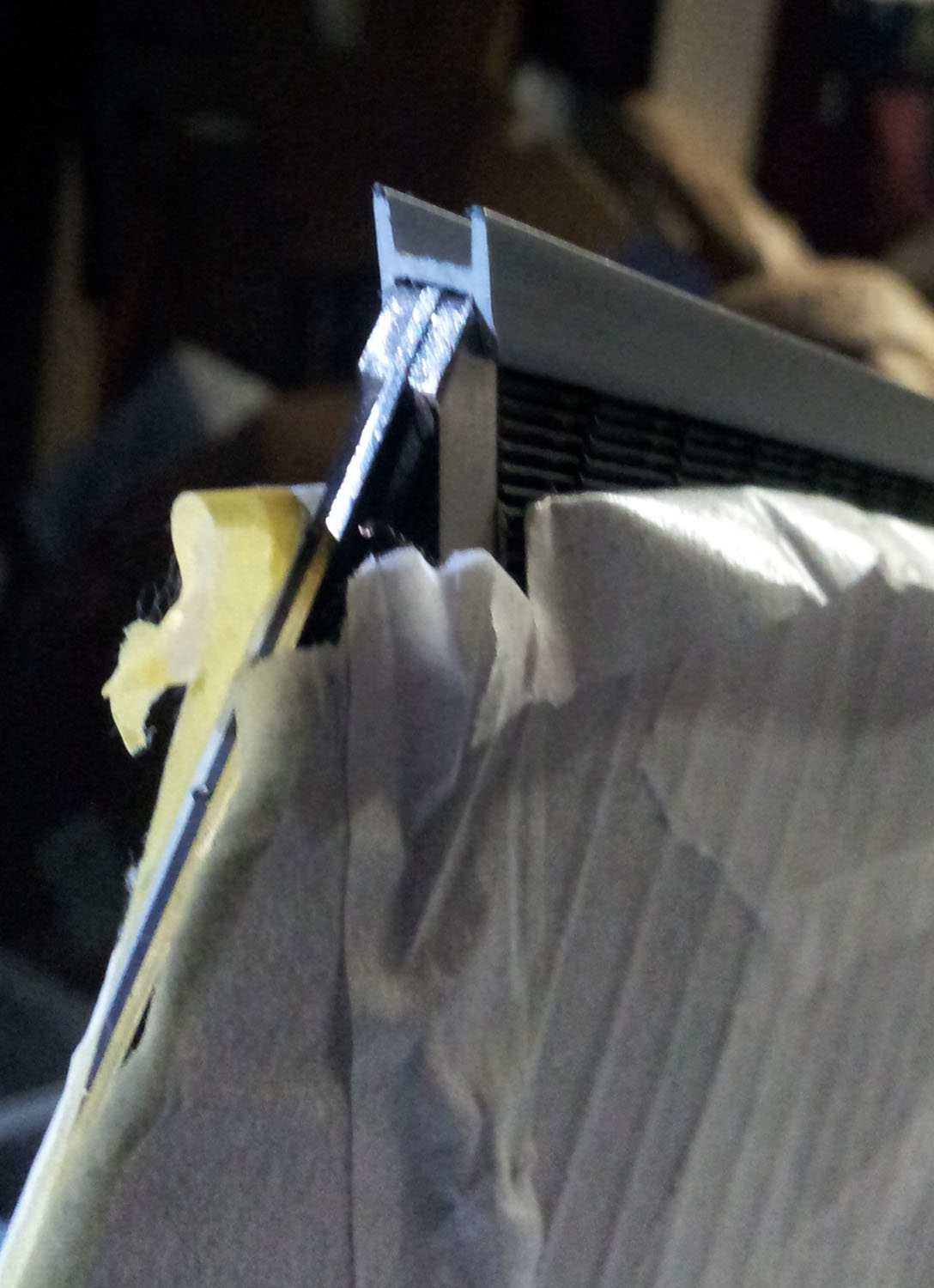 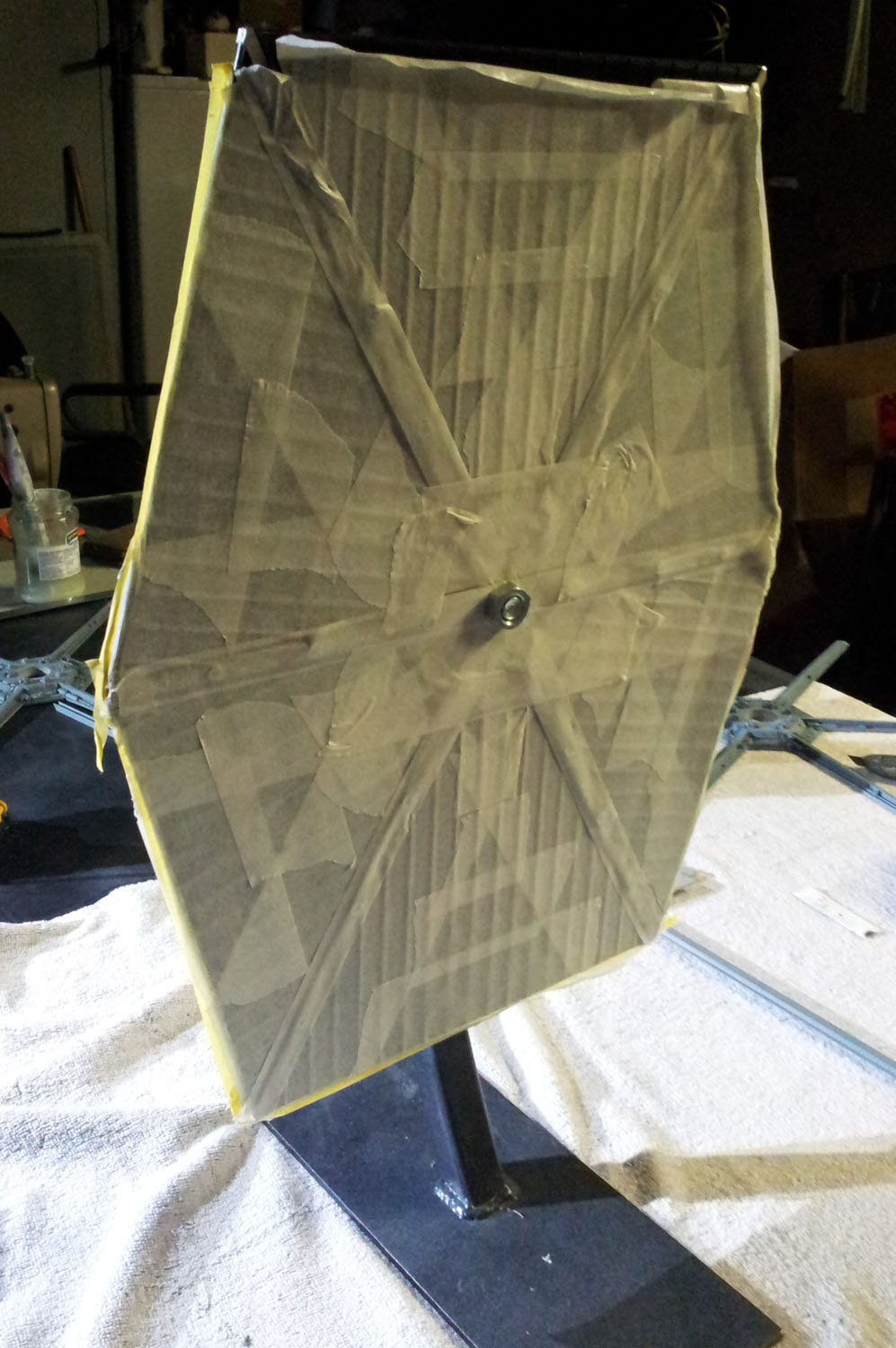 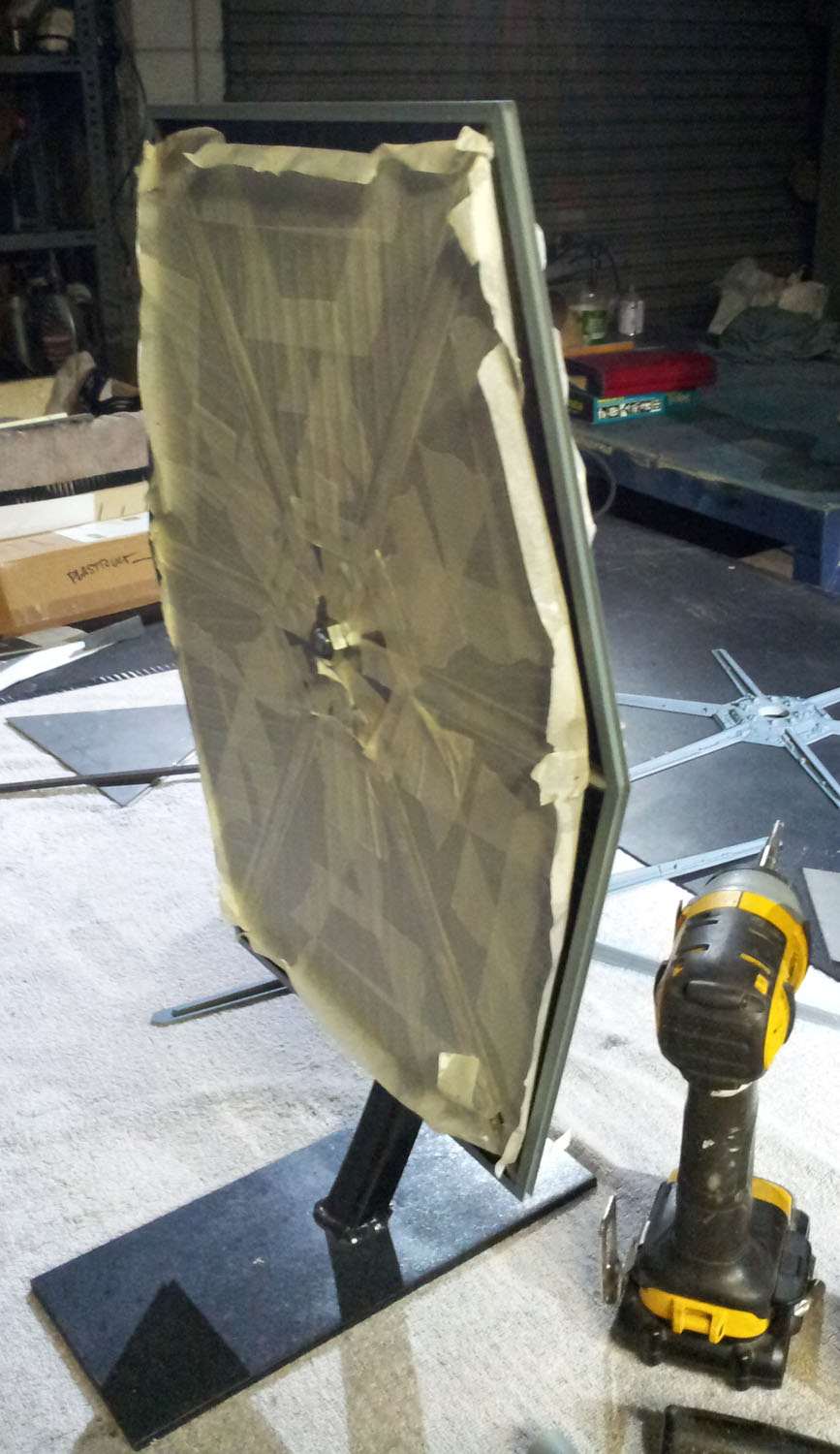 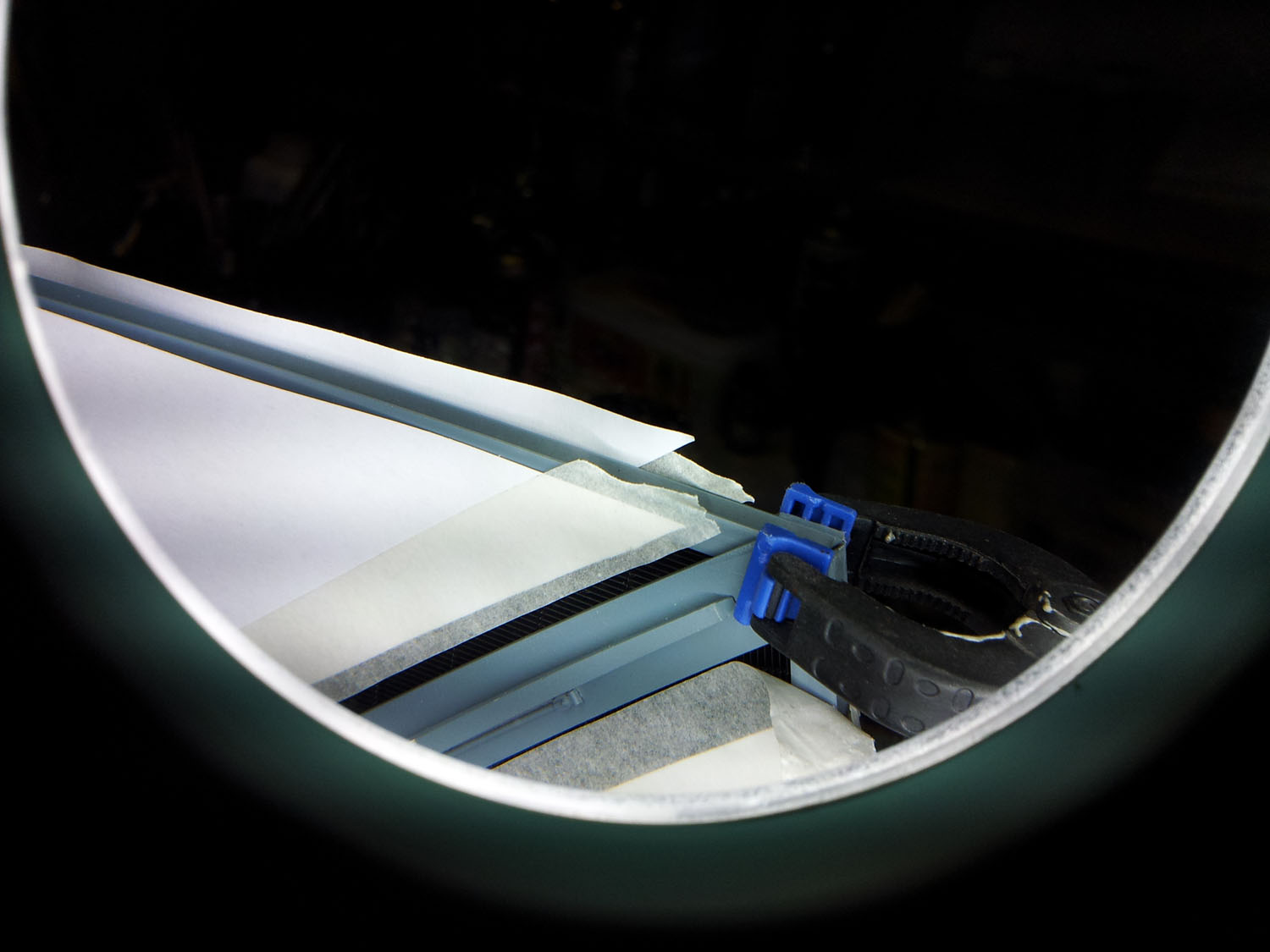 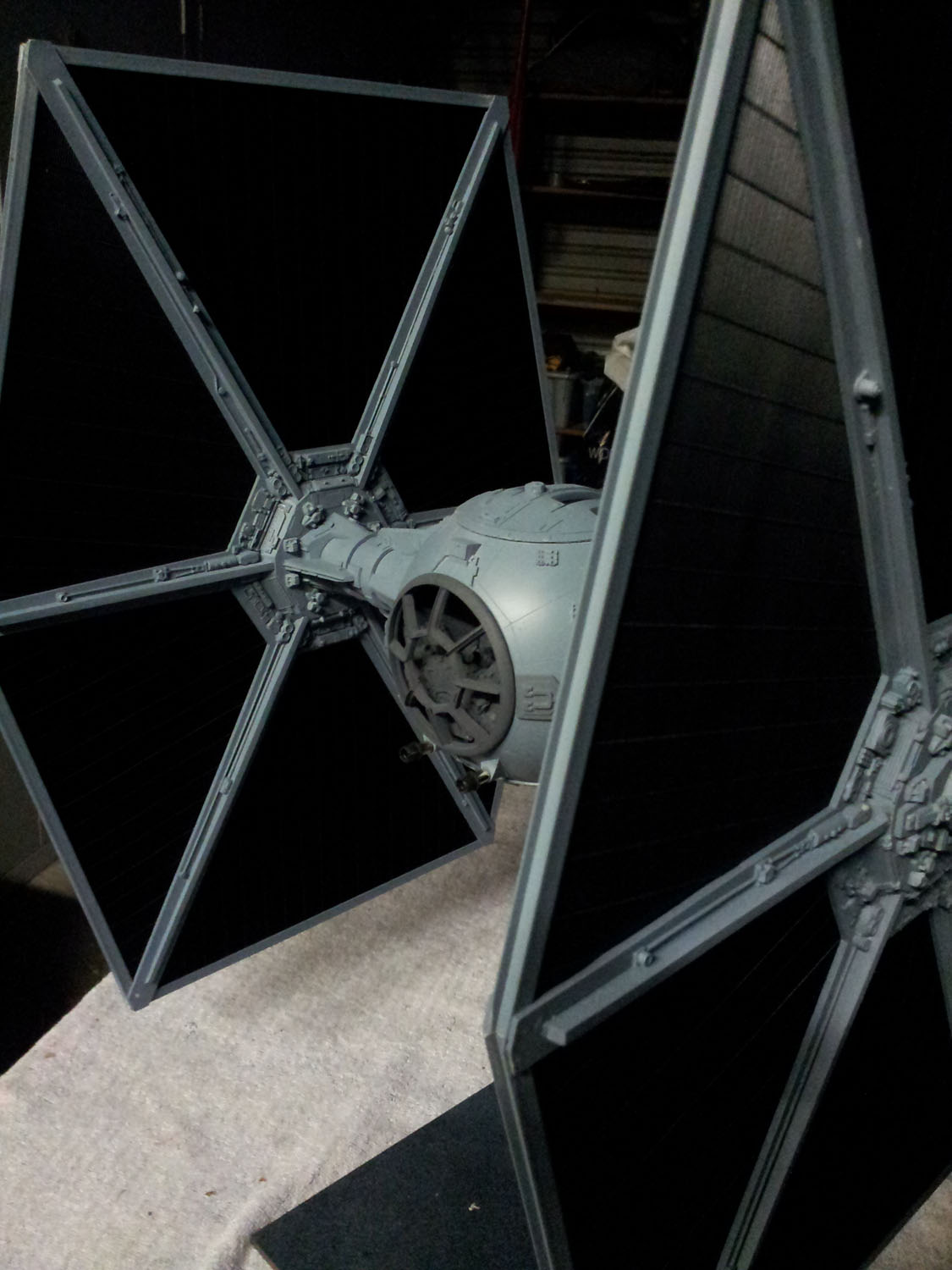 detailing to go.
heres a few shots
Still more to go, but this should end this thread unless anyone needs to add more info, please do if you feel the urge.
There should be a buid thread on this model soon from vectorzero. Keep an eye out for it. I'm now painting this beasty

RPF PREMIUM MEMBER
So your wingstars are going OVER your H-Beams?

RPF PREMIUM MEMBER
Hi Jason, yes sir they are. I am trying to make this as bullet proof as possible for the client. My thinking was it would give more support to the H beams and the edges of the wings, it seemed like the most simple and robust method I could think of, as I wanted to use the laser cut sheet as my main alignment, and I needed the edges to be applied to the assembly for accurate corner reference and give me nice targets to ease the wingstars into position. I guess its a bit different, but it works really well !! I have shaved the thickness of the H beam from under the wingstar corners so the look is the same as the references I have. Only thing left to do is add a little filler to bridge the end of the wingstar and blend it into the H strip edge, which should be super easy. I know its not normal, but we can but try.

Flyscriber said:
I have shaved the thickness of the H beam from under the wingstar corners so the look is the same as the references I have.
Click to expand...

That's what I meant, when I said there was more than one way to tackle the problem of the corners! I prefer that way too.
I agree that way seems more structurally sound. And.. if in the end, externally it looks the same who cares?!
Flyscriber, I've never heard of flexible black automotive bumper filler? May I ask the brand (maybe a picture of the product container?

This is becoming my favorite TIE build !
Do you have all the TIE decals you need?

I don't have any decals for my build. Is it possable to purchase them somewhere.

RPF PREMIUM MEMBER
I have a few sheets of differing decals for this build Some in two parts ( a white sheet (background) and a coloured sheet for the arrows etc. I not sure who produced this set, vectorzero will no doubt know the origin. Also have a Jason Eaton sheet with the white background already applied. Both sheets are needed for this Tie as there are more red DAN, and ANG's than you would think and some of the red on white "arrows/ triangles " point the opposite way, which is where the two part decals come into play, as you can reverse the red triangle on top of the white square.
Heres couple of images, still a fair way to go on the painting and finishing now. 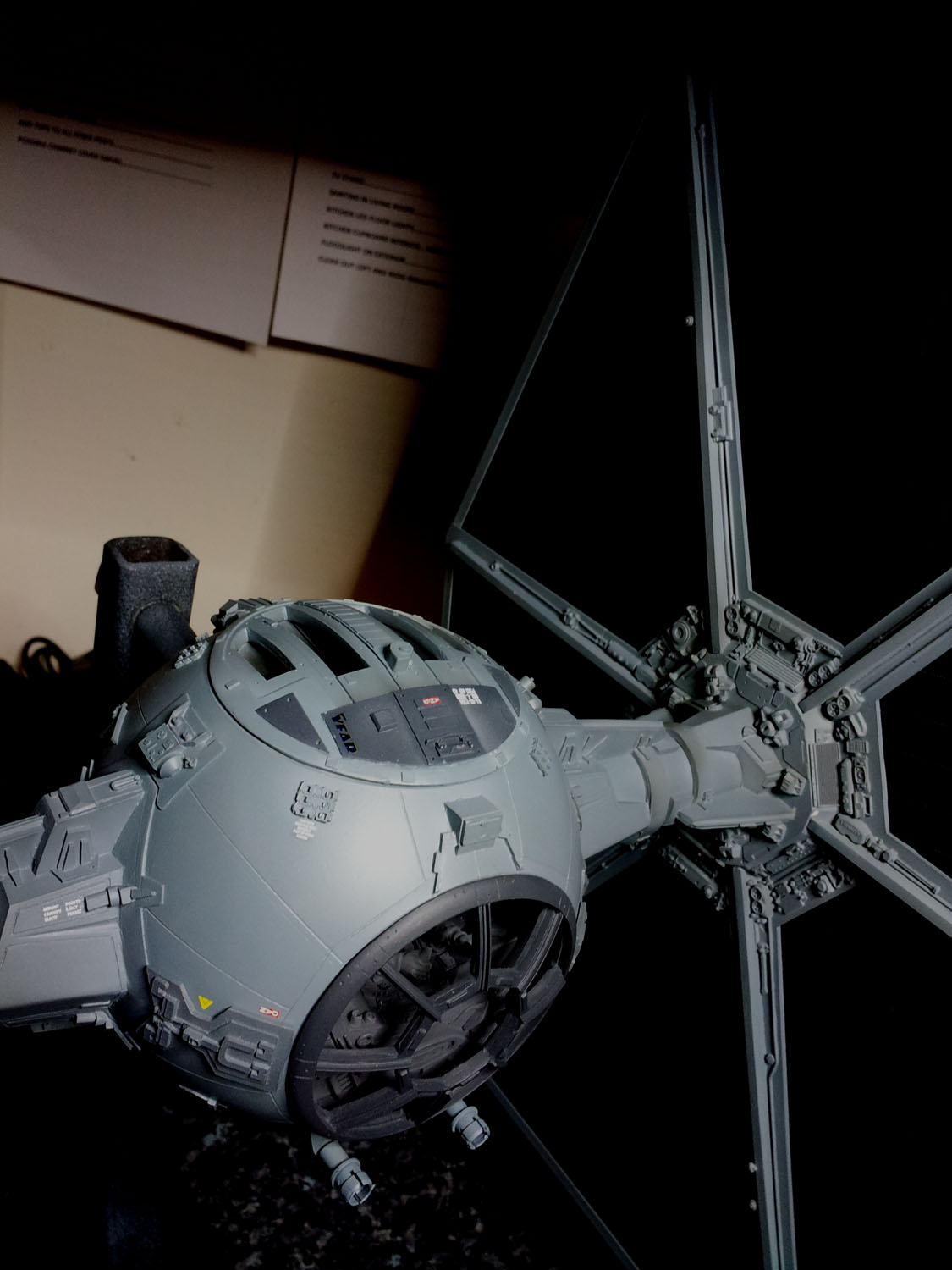 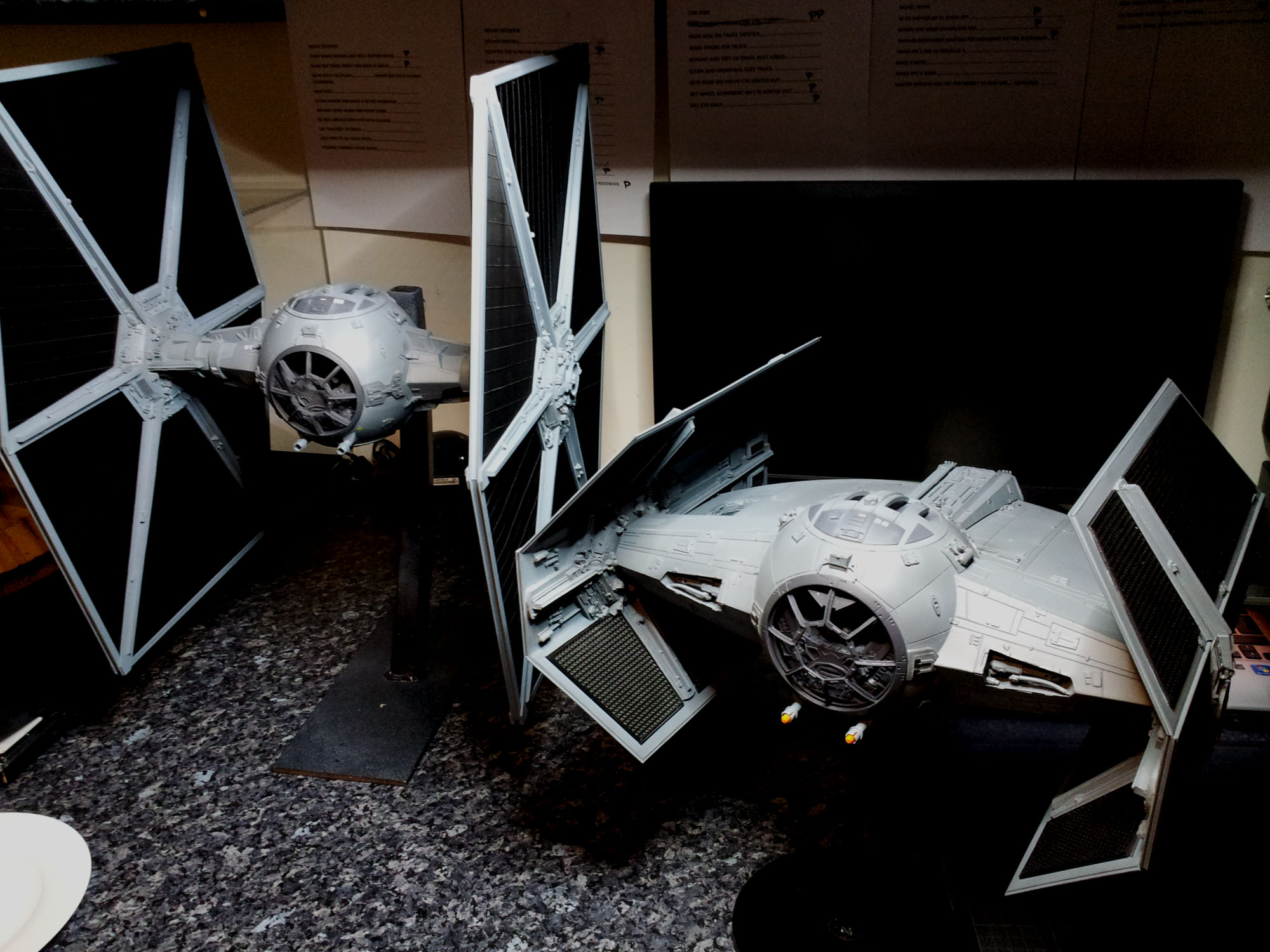 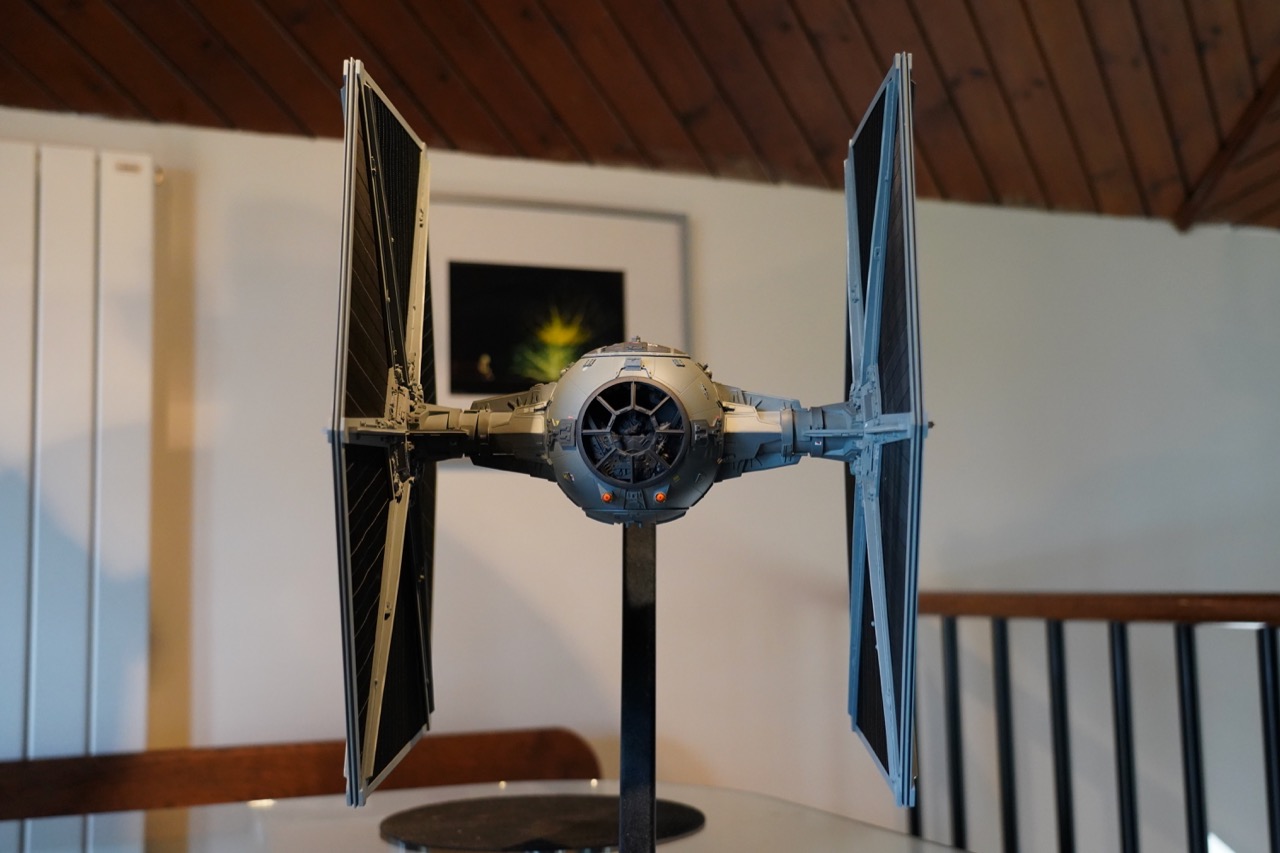 RPF PREMIUM MEMBER
Cant see the attachment Vectorzero. Not sure whats going on there.

RPF PREMIUM MEMBER
I'm using the 'Media Gallery Embed' function. Not sure why its not working.

Update: Switched to a slightly lower resolution picture. The original shot was taken using a DSLR at 6000x4000 pixels. I then used the camera jpeg at 4MB in size. That didn't work, so this is a further compressed image at 157KB in size.
Last edited: Feb 9, 2019

RPF PREMIUM MEMBER
Hi everyone.
Heres a little video of the completed Tie with its metal wings, just so you can check it out if you fancy.
Thanks to everyone who contributed to this thread with awesome info.

Great build! looks really nice. Building those wingstars is a real bear that I avoided for about 4 years and I think yours are very, very nicely done. Gotta get me those decals as they add that "finish" that I feel mine is missing. Again great work.

RPF PREMIUM MEMBER
At last a beauty shot. Getting ready for exhibition at Scale Model World 2021 in the UK. This is a focus stacked image for maximum depth of field. Still playing with white balance to get the colour accurate - but its such a difficult colour to shoot. 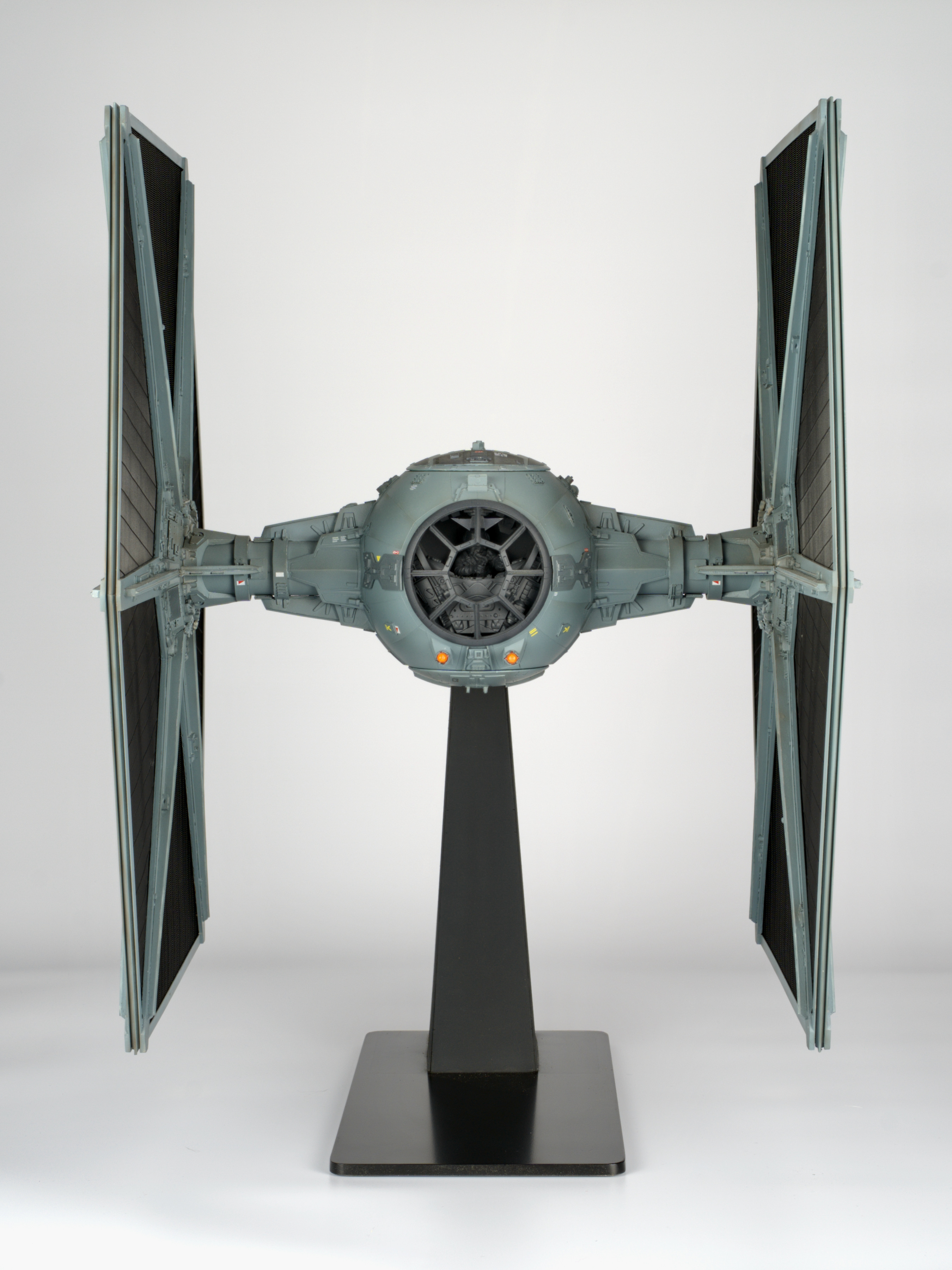 Hi Flyscriber
Beautiful build, simply stunning.
I have a question about the plastruct H beams. Earlier in the thread it is stated that 1/4" H beams are used for the edges of the wings. This is 6.35mm metric, so did you use the 6.4mm HFS-8P from plastruct, or as you added the additional 0.9mm inner did you use the larger HTS-10P at 7.9mm to allow for the extra thickness?