That FA shampoo--where would you get that?

publiusr said:
That FA shampoo--where would you get that?
Click to expand...

Totally belongs on a warp nacelle!

Thanks guys for all the feed-back!! And yes...I want that "FA" bottle (never saw that one in Canada...must just be in Europe or Germany only)

publiusr said:
That FA shampoo--where would you get that?
Click to expand...

joberg said:
And yes...I want that "FA" bottle (never saw that one in Canada...must just be in Europe or Germany only)
Click to expand...

LOL, I thought you guys might like that. Actually, I was shopping the day I wrote that and happened to see it the evening after I posted, but thought it was sooo cool, I bought it just to post it here and swapped the original picture out. They had red, blue, green and a couple other Colors if I remember correctly… I am going to be VERY clean the next couple of weeks.
I will go to the store tomorrow and take a picture of all of them.

Yeah, I saw them here in Germany, at a store called Real, which is part of the Metro Group. I am not sure if Fa products are sold in any other countries outside Europe.

If anyone is interested in having some shampoo under the Christmas tree, PM me and I can get some out in the mail.
Last edited: Dec 16, 2018

Seems like they have a whole row of products with the same cap design... Here is their web site… took me 30 minutes before I realized there was a bottle of shampoo on the page.

In case you just cannot make it past the women in bikinis, here is a direct link to some of the products.

Since we're talking about nacelles/engines/magic space thrusters, I've got a pretty good one: faucet aerators. The guts make cool inner baffles for the tips of rocket-type engines. Even better if they're lit up. 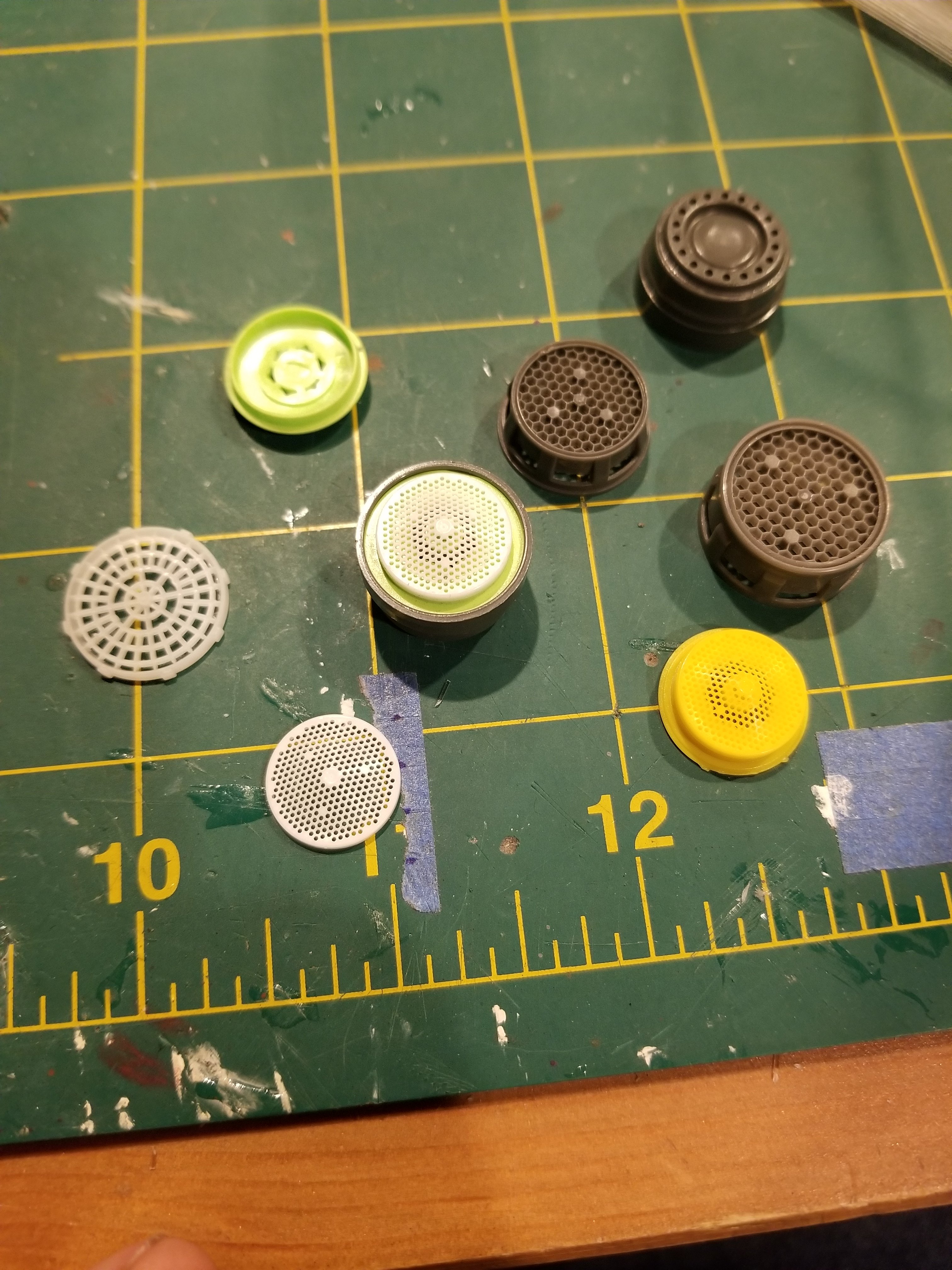 I used two of the white one on the far left on my bandai A-wing before I found the etch set.
The only down side is the limited sizes that they come in. About .5 to .75 inch.

Not sure if you have beverages that are sold in Tetra Pak, but I use them a lot. If you cut them up they are great for using as a under-lay for your work area to keep paint glue or what-not off the table surface. I also favor them when casting, when pouring silicon molds, you can use them to make the side walls, and if you cut just one side out, set your finished mold in it like in a tub, they are excellent for pouring resin and keeping any escaping resin off of other surfaces. 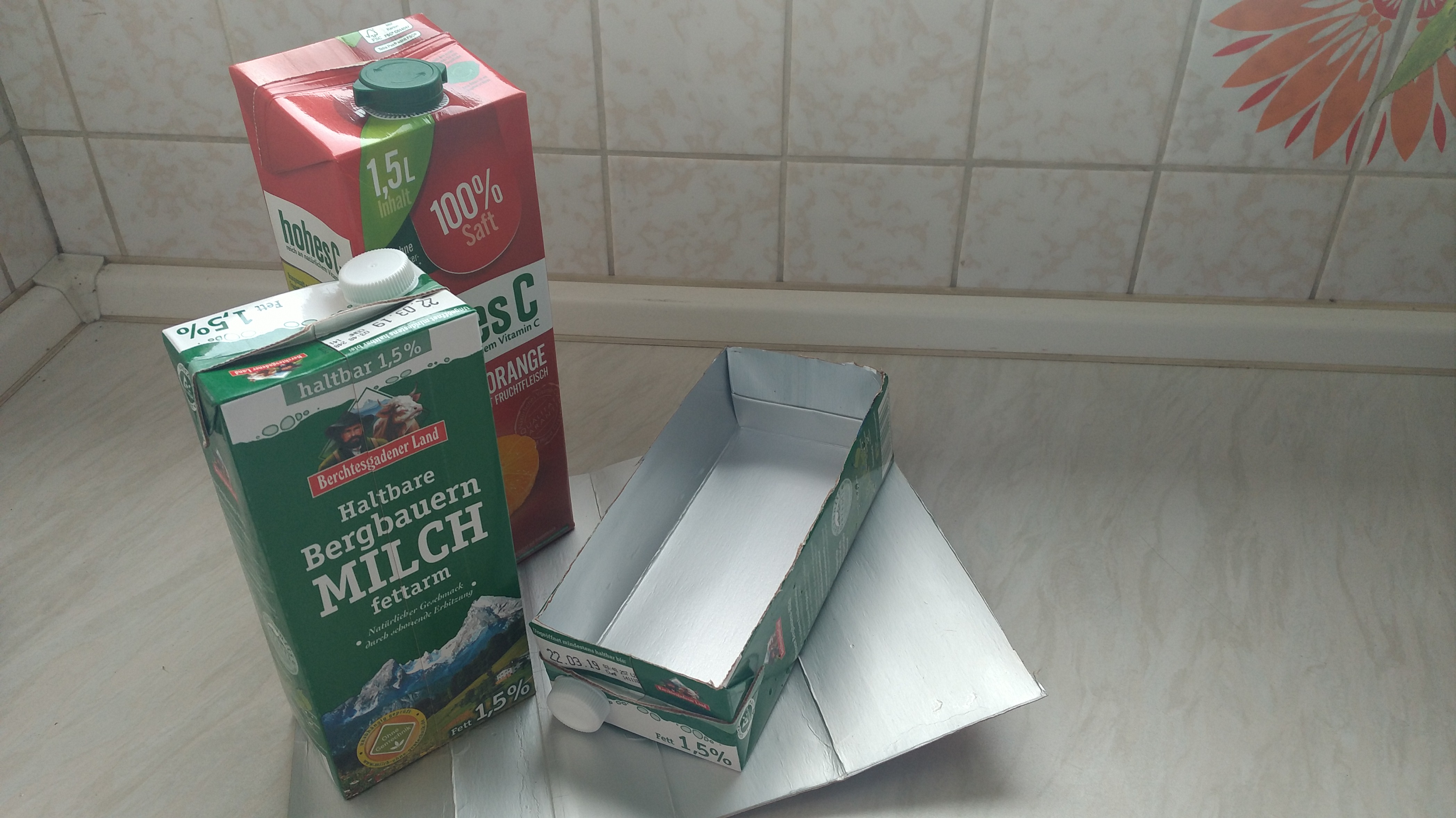 Yep, the Tetra Pak are really a good idea for quick and dirty molding session Thanks for that Pixelworks! 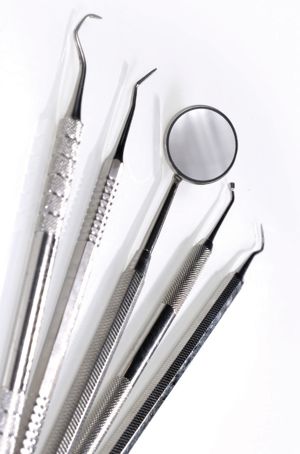 Those cheap $1 LED flashlights you can get at Walmart... these... 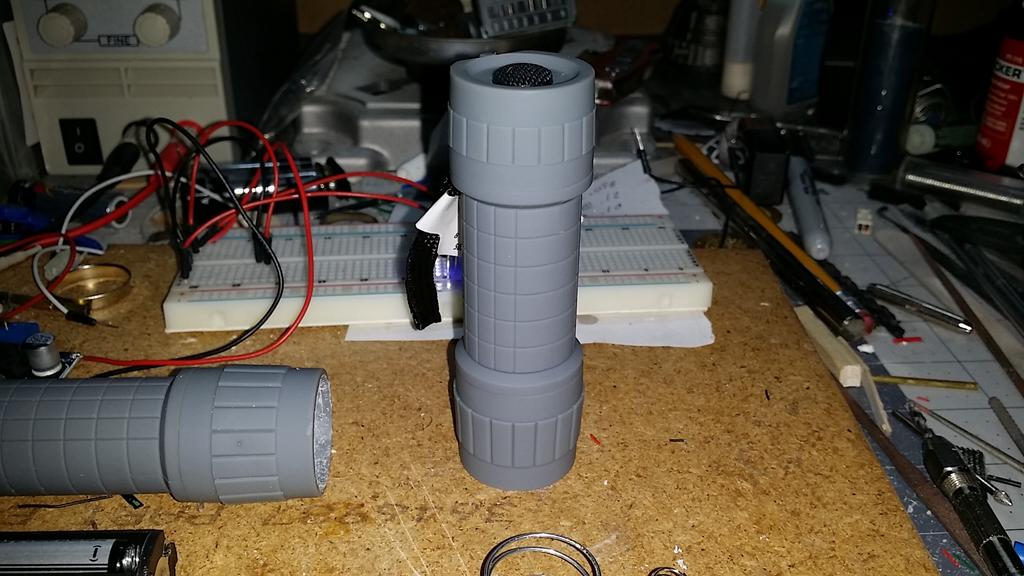 You get a ton of parts out of one... and just a buck! You get a battery pack, on/off switch, LED array with 9 LEDs and misc parts- and I am sure the case itself will come in handy someday as a kitbash engine housing or something 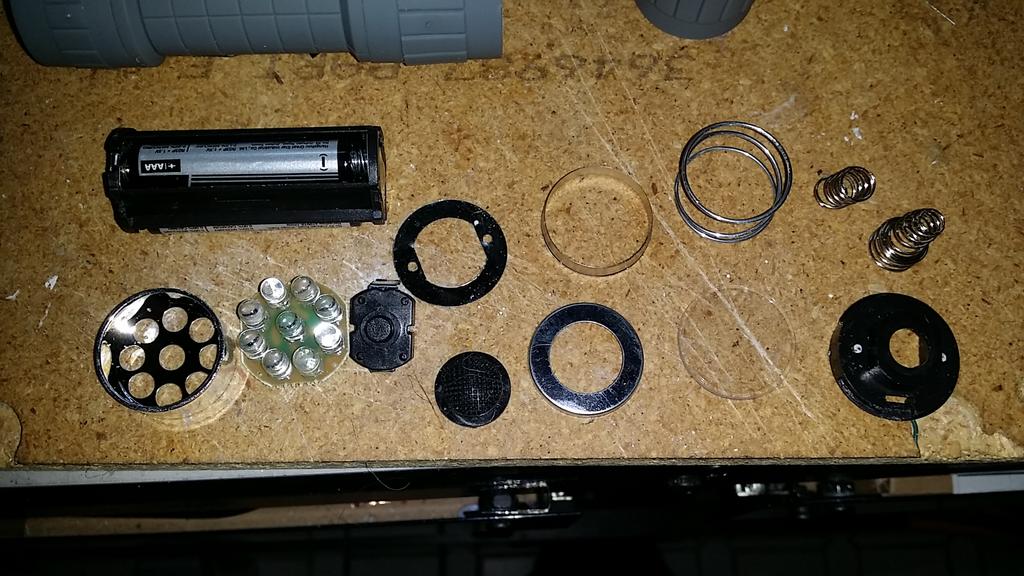 The LED array is very interesting. It is 9 LEDs but it has resistors/limiting circuit which lets you wire it up as if it was a single regular LED. 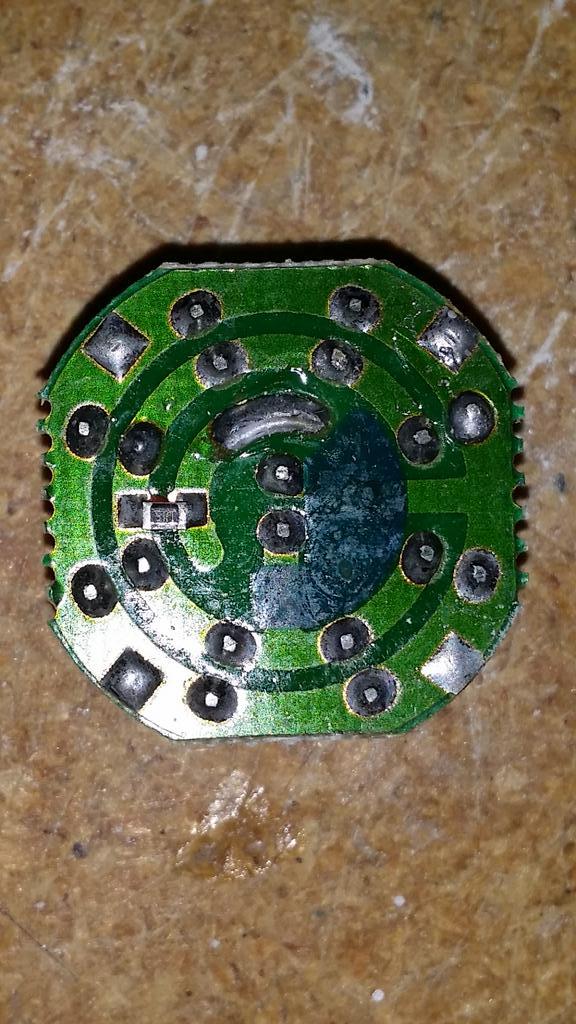 It works great with an Arduido too! Here are 3 of them being used for Viper thrusters doing a power up sequence

Also... do you have an old battery powered tooth brush you're going to throw away? Well don't! It also has some cool parts including a DC motor! 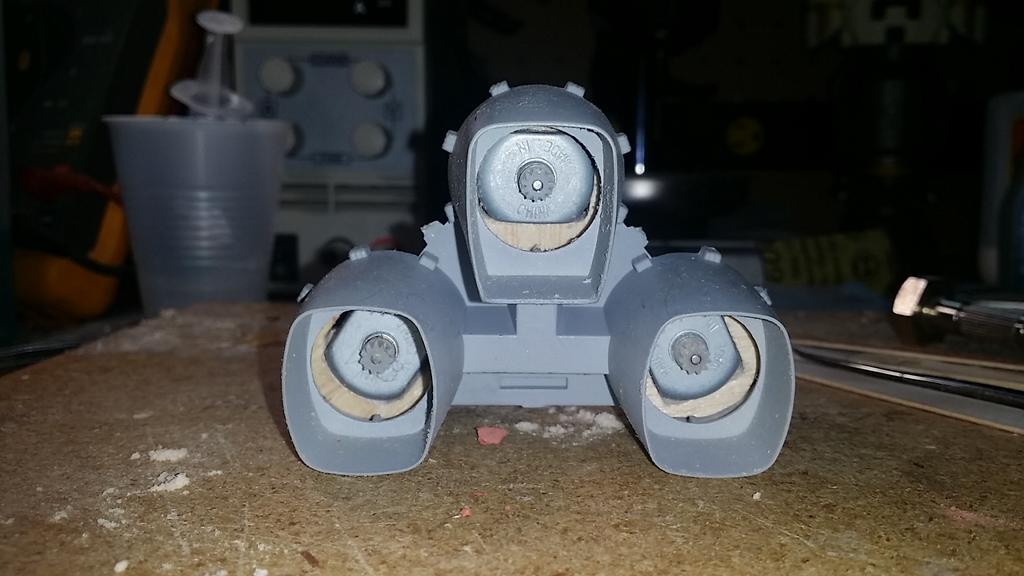 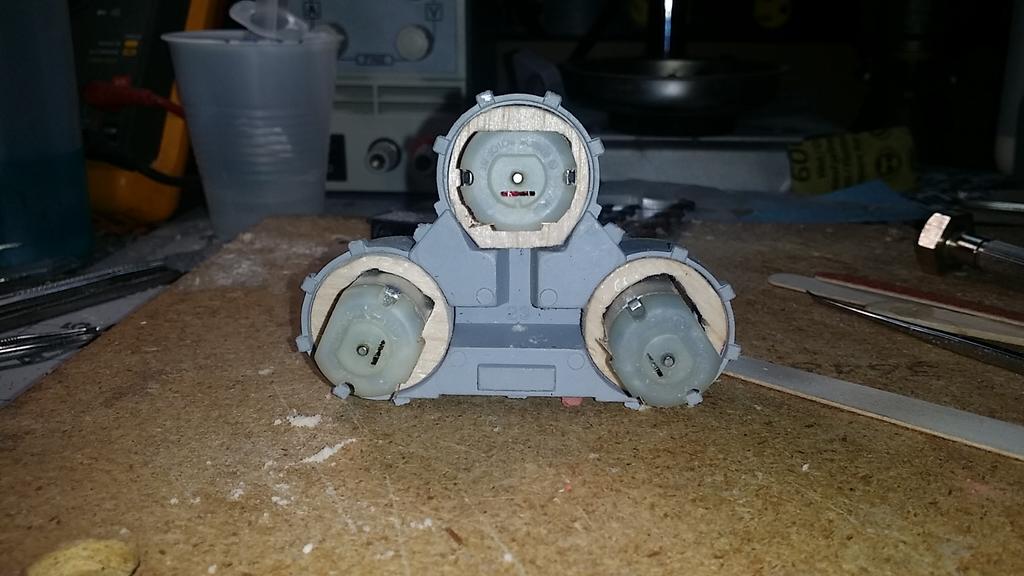 The motors can be controlled via a variable pot or even an Arduino, but they do have a pretty high RPM so won't work for all applications. Here is a test of them spinning the intake turbines on a Viper- note the one isn't spinning because I just had things pressure fit together and it came loose for that turbine, but you get the idea

Something else I like for wiring in tight places...
Instead of digging a trench inside or in those times you must... outside the model, I use guitar pickup tape. It's copper and comes in a variety of widths.

Here is an example of how I used it inside a Viper wing to make + and - power runs to the LED for the laser canon... (I could have gotten away with using magnet wire but I wanted to test this out ) 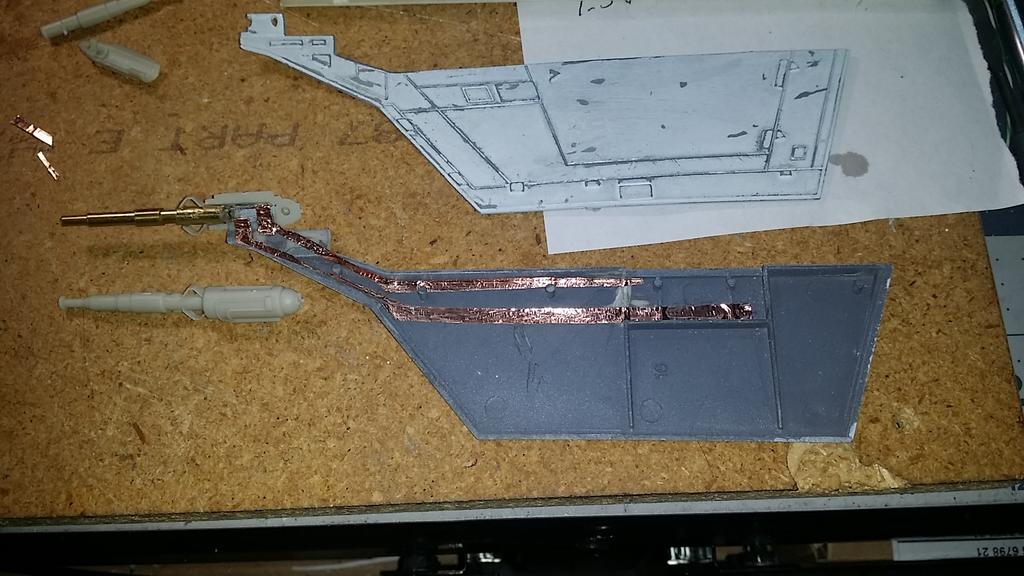 Its cheap and easy to use. When I start my 1701-D build (again) I am going to use it to run power to the nacelles for lighting. I'll hide it along the edge of the pylons and once painted it shouldn't be that noticeable if at all. I'm also thinking of using it in my 350 builds for power busses so I don't have wires all over the place. For that all you need to do is lay down a strip of the copper tape and make some tabs in various locations that you can use your pin vice to make some small holes to solder the wires going to the LED or light strip in that area.

RPF PREMIUM MEMBER
Toothpaste: I use it as masking material to achieve “paint chipping” effects.

JB Weld: This is my “go-to” adhesive for all resin projects. I have also used it as a spot-filling putty, and even sculpt material, on occasion.
Last edited: Dec 24, 2018
C

Treadwell said:
Emery boards. I scratch my head whenever I see people making their own sanding sticks.
Click to expand...

I have made a variety of sanding boards. Emery boards are fine, but I haven't seen them above the nail-usage size. You ever see one the size of a full sheet of sandpaper?

ALLEY said:
Toothpaste: I use it as masking material to achieve “paint chipping” effects.

JB Weld: This is my “go-to” adhesive for all resin projects. I have also used it as a spot-filling putty, and even sculpt material, on occasion.
Click to expand...

JB needs no introduction. But the toothpaste idea… I like that. I will be adding “chipped” paint to my Rostock vest soon, and was thinking of ripped strips of masking tape to get the jagged, worn areas… I’m going to experiment with this! 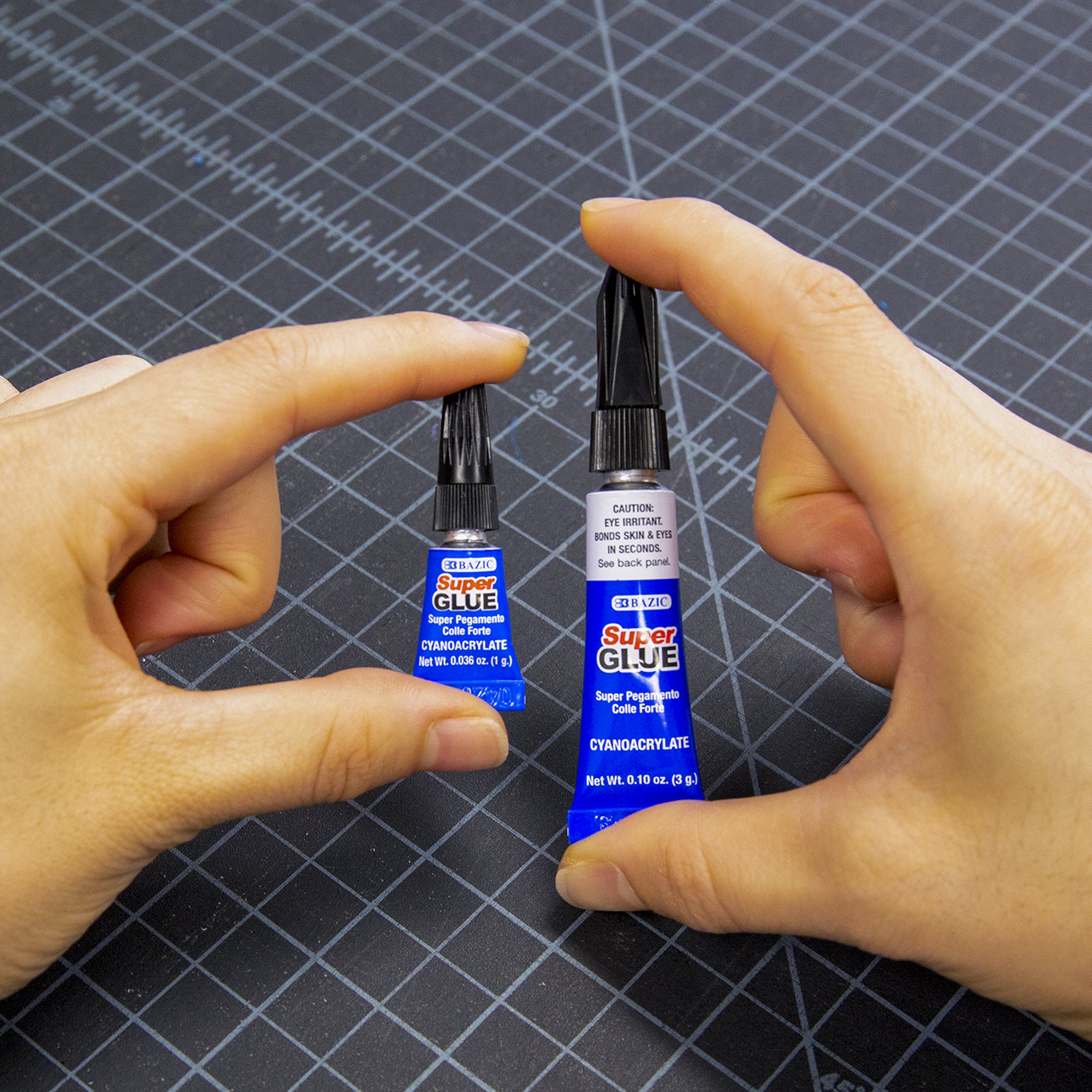 Engine exhausts. After you finish using the superglue for your models. These are cheap. You can buy 6 for 3 dollars online. Even cheaper in brick and mortar stores that carry bazic stuff. Found 6 for dollar fifty.

1. Textured foil wrapper from some brands of cream cheese, have a quilted effect that is perfect for small scale 'sound proofing curtains' as used in aircraft interiors of a certain vintage. Nice detailing material, and with the 'backing film' that it has, the pattern won't 'crush out'.
2. Fabric netting used sometimes for veils, comes in a wide range of colors and makes great small scale 'chain link fencing'.
3. Frozen juice lids: steel disks with a rim. Great for brush painting palettes, skiff for holding a squeeze of putty or dabs of CA or PVA glues. Plus, can cut up for metal to use with RE magnets for 'latching'.
4. Foam meat trays. Well cleaned, makes a good source of pads to use with wet and dry sand paper.

Rbeach, do you have pictures of the foil wrappers? Curious about what they look like.

Gold foil from Rollo wrappers are great for lunar lander (and other) gold covered subjects.

Go to the makeup department and get yourself a set of inexpensive makeup brushes. These are your new dry brushing friends. They’re great: big round soft bristles down to little filberts. As a bonus, the handles come in all kinds of bright colors and might even have glitter! (Ironically hobby companies are now marketing their own dry brush sets that look just like makeup brushes…no glitter, though.)

Not the most awesome TOS Enterprise ever, but it’s mine.

Does Pledge still manufacture a floor gloss that can be used for airbrushing?

Anyone print their own waterslide decals for models or props? Seeing if someone may be able to help print of sheet or offer suggestions on a project.

Not another ABC warrior.