Got a new reel of PLA yesterday, as well as approval of the model I put together for the machine donor. Life is complicated by a sudden hospital admission for my wife (non-covid related, but scary as hell and, for the moment, without any easy answers or release date. It feels like making armour at this point is weird and disrespectful, but so is sitting around staring at the TV or the walls. My kids and I are working things out between us, so in the meantime, I'm keeping projects running to stop my brain from running.

The larger bed size of the Tinker means I can cut down the number of parts I thought the chest would have to be split into - it's now 10 instead of twelve. The first three are together already:

Gratifyingly, it's about the same size as the foam armour I made, so that wasn't as much of a muck-up as I thought.
The fourth piece is printed off, and waiting for the fifth piece which is probably finished by now, but is at home while I'm at work.

When those two get attached, that'll be the left half of the front of the chest piece. Five more, and I'll have the whole front done. I'm more confident about printing the whole thing now, because the chest was the largest piece, and with a decent plan for how to slice it, I'm happy I can do the other large pieces too.

Got home and put the other two pieces together with the three I already had. There are still some ugly gaps - the printing isn't spot on, but it fits quite well, considering. Next I get to slice the other side!

For someone who's only ever really been a helmet-maker, this is a lot of chest armour!

But what will you really do?

But what will you really do?
Click to expand...

The fun is in finding out! Even I have no idea....

No pictures today because last night was a real flustercluck for so, so, so many reasons. I had come down on printing off the back panel of the chest piece, and the Tinker said it could do it in six pieces. I should have been suspicious then, but I gamely sliced the first one and set it running. Nine hours, but hey, it's a large piece, right?
Seven hours in, something happened that was bad enough to knock the clips of the bed and slide the whole thing out from under the print head. I got about half an hour's worth of filament just dribbling out of the print head and spiraling away into freefall.
Lucky for me I ALSO decided to start work on that E-11 I don't need, have no instructions for, and can't store. Got the main pipe and the endcap printed. 19 pieces more to print, but at least one of those should be printed multiple times.
I'm an idiot.

Here's a couple of pictures of the print fail. I think I might be able to re-slice that section and print the missing part. It won't be perfect, so it'll fit in well with the rest of the build...

Meanwhile, the E-11 that I don't need and shouldn't have started is doing well.

Ooops.
Messed up on the placement of the U-tracks, had another printer fail with the scope which I've patched for now. The whole thing looks like it's made out of plasticine...But I love it! Still have the magazine and the folding stock to print, then I get to paint it. However, tomorrow Middle Kid goes in for Wisdom teeth extraction, and we're still waiting to hear when my wife comes out of hospital. Might be a busy few days.

I'm so chuffed with it! My inner seven-year-old is delighted, as is my outer 49 year old...

Yes, it's ugly and badly-constructed, but it's the right colour, and it's all mine!

Gonna get back to the armour soon, but I think I need a new reel...

So, me and the Tinkerine have some serious discussions ahead. I was counting on that bigger print bed to produce the sections of the back armour, so i could make it in six pieces, not twelve. I set up the first one, and luckily checked the print time before I set it running. 18 hours. Call me "Old Mr Impatient" if you will, but that seemed like a LOT. So I took the same piece, cut it into three and fed those numbers into the Finder. Each piece would take around 2hrs to print, and two of those were on the "less than" side of two hours. So why does ONE piece take three times as long to print?

I checked the obvious reasons first:
Aliens? No.
Gremlins? No.
My children? Probably not.
The Cat? Strong possibility, not easily discounted.

Finally I downloaded the user manual to check the Tink's density settings. I'd noticed it defaults to 18%, which doesn't seem like a lot, but I have been winding it down to 5%, which is what the Finder uses. The finder also gives you the option of lines or hexes. The Tink does not. Then I remembered the cross-section photo I got of the first piece of back armour from the fail print. That was supposed to be at 5% too, but it looks like this: 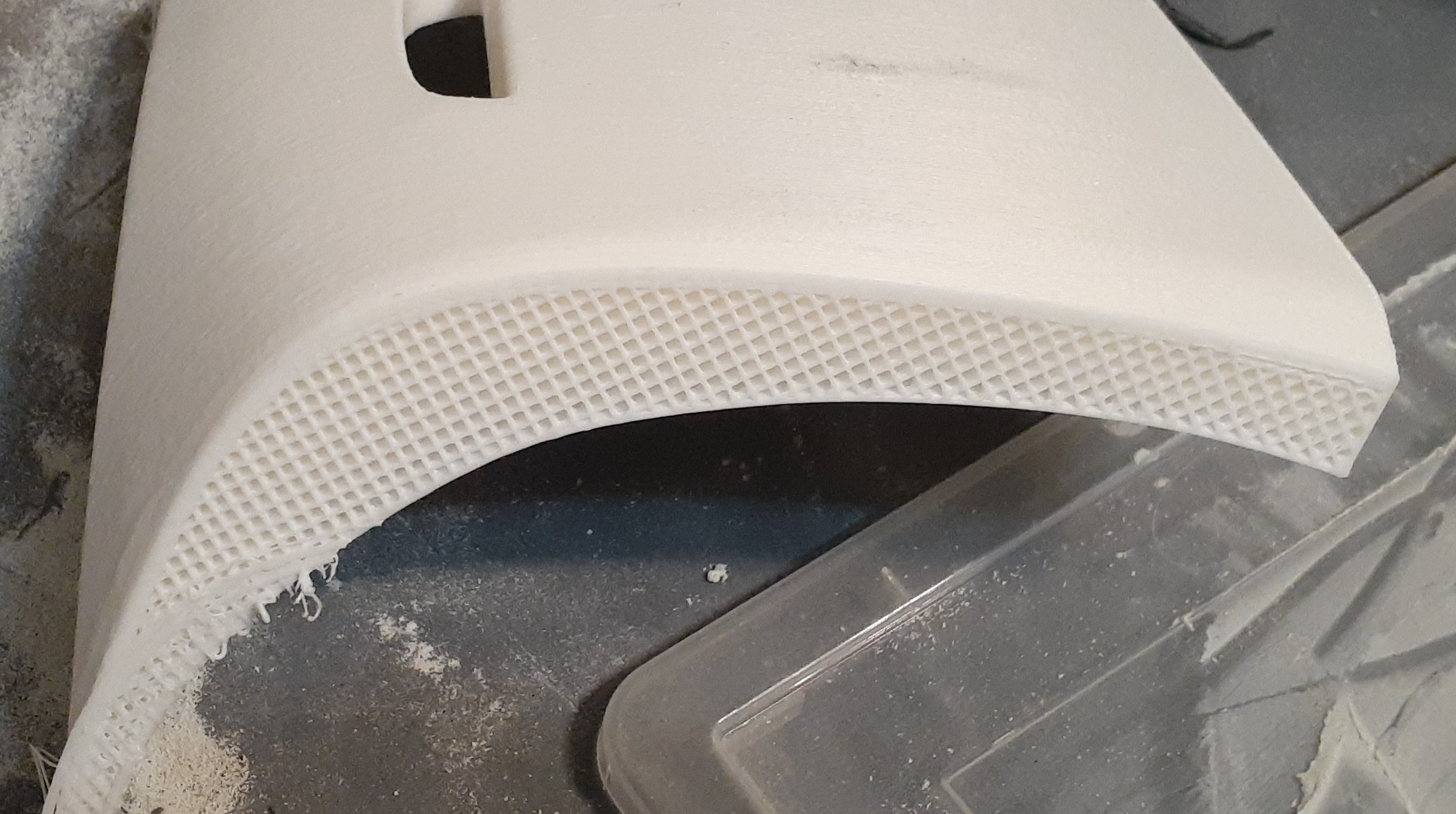 I mean, this kind of suggests I'm printing at least 20% infil, right?
So, tonight there will be discussions. And in the meantime, my poor old workhorse of a Finder is churning out that same thing in three pieces, which I then have to glue together and bondo over the cracks. This armour is dangerously close to being more bondo than filament....

The pieces from the Finder are working out ok (if somewhat yellow...), and I think Tink and I have come to an arrangement. The next piece is printing out now, with considerably less infill.

Oh boy.
SOOOOOOO much surfacing work to do!

The above count is wrong. The files I got from The Galactic armoury include the lumbar piece as the back of the abs. So, once I've finished printing the abs (which may be by the weekend), there's only eight pieces to go.
Orientation is everything, I'm finding with my 3d printing. This piece needed a bunch of supports, so the print time was nearly twelve hours.

The mirror piece for the other side has been split in half and rotated, and printing both pieces on the same plate, it's being done in 4 hours.

Front of abs completed. Going to take a break from printing tonight to watch 'Loki". Still hope to have the back of the abs done by the end of the weekend. Also sliced the file for the first of the knees, and I can print the thing in two pieces side by side on the Finder, IF I have enough filament. You know, they say money doesn't buy you happiness, but it DOES make life a lot simpler...