Where did I see someone posting a brilliant 3d print of a glove-plate support? It was like a three legged table, but upside down, and the legs go through your glove and are glued to the plate? Or did I dream it?

Suddenly remembered I spent all that time last Spring taking Blender tutorials so I didn't have to ask for help knocking together simple shapes like this, and built my own. Printing it now to see how it goes.

This weekend has been pretty much perfect - I got a load of the outside work done (paving), did a load of domestic stuff (went out with family to See Art And Appreciate It) and I got some time on the armour. I've now printed and assembled:
1 Left Shoulder Bell
1 Left Bicep
1 left glove plate
1/2 Left Gauntlet.

I've surfaced (with bondo) all bar the gauntlet, which isn't finished yet. I've printed off my glove plate holder and fitted it. It works ok! I've primed all three pieces, and sprayed them chalk black for that animated palette look. In the background of this pic you can see the Mando Armourer breastplate I'm making for Mrs Dim. That got a bit more bondo and sanding this weekend too. AND we took the dalek out for a spin around Science World (in the rain.) Weekends this good are a rare treasure and I appreciate it very much. 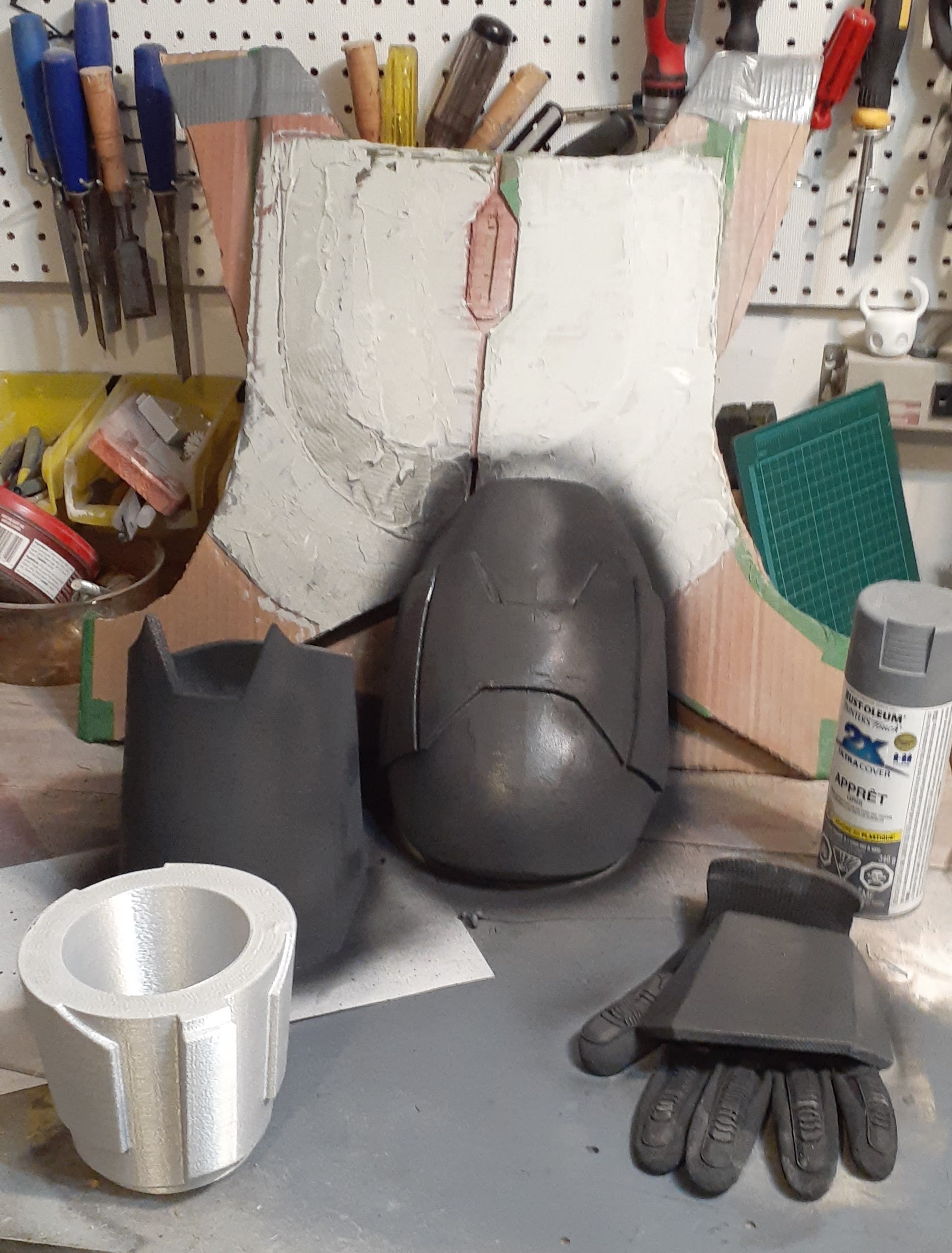 Just the one helmet and my Galaxy's Edge Lightsaber in work today for may the Fourth. Hope everyone out there who celebrates is having a great day! And everyone else...ALSO have a great day!

OH GOOD GRIEF! Just once, I would like to take things slow, and do them right. I mean, here I am 3d printing a suit of armour, so most of the actual work has been done for me, right? I'm not making the files in Blender and then exporting and printing them, oh no. I bought the complete set, ready to go. AND YET! STILL, I stuff it up.
Today's cock-up comes courtesy of my inability to slice large pieces into multiple files. I had printed three parts of the gauntlet, leaving two to go. Inexplicably (well, no, the explanation is impatience, as always) I did not slice those last two pieces at the same time as all the others. The inevitable result? The two pieces do not fit. I'm going to have to cut them down, then PRINT MORE TO FILL IN THE HOLES! This piece should have been finished by noon today, but instead I'm going to be printing into tonight to fix mistakes that I have made. Yes, getting this angry is irrational but:
I've wasted PLA.
I've wasted time.
I made a mistake that I could have easily avoided if I had been more careful and less impatient.
Plus, this doesn't bode well for when I have to slicve things into many, many pieces, like the chest armour. I need to keep a really careful check on how all those bits are going to go together. Ugh. Here's a picture of the gauntlet not fitting together:

Anyone out there got any words of encouragement? What keeps you building when everything falls apart?

RPF PREMIUM MEMBER
Anything you slice is going to need some gap work. The better models have already been been broken up with registration marks that makes it a bunch easier. The good thing is bondo spot putty and sanding can cover up a lot of errors!

I think I've rescued the gauntlet without having to print any new parts. It's going to look a little rough in places, but that's all relative - still going to look a hell of a lot better than the scratch build ones would ever have done. Printer is happily working away on the right shoulder bell, so it's possible that by Monday I'll have two shoulder bells, maybe two bicep pieces, a gauntlet and a glove plate. Still not sure if I'll attempt the larger pieces on my printer or try farming them out to someone with a larger bed, but at least I've regained my positivity about this project. The other thing I'm working on, the Dalek voice modulator, is a whole other ball of wax. A ball of wax that doesn't work.

RPF PREMIUM MEMBER
If it makes you feel any better (it won't), I'm working on a pedestal base for a Pink Panther themed Pachinko machine and completely blew the paint job. Two weeks worth of work wasted -painting over it and starting again.

Yup, frustrating. But, this is how we learn....

Keep at it, you'll get there eventually

Snow Builder said:
If it makes you feel any better (it won't), I'm working on a pedestal base for a Pink Panther themed Pachinko machine and completely blew the paint job. Two weeks worth of work wasted -painting over it and starting again.

Yup, frustrating. But, this is how we learn....

Keep at it, you'll get there eventually
Click to expand...

Pachinko Panther? That sounds cool!
I'm not sure about the "learn" part, although I do seem to have an endless stream of new and interesting mistakes to make. But this one is behind me for the moment, and I've accepted that a 3d printer isn't just a ticket to blemish-free props. There's still a ton of assembly and finishing work, even if it turns out fine.
Still don't know what to do about the dalek voice mod, though. Have to figure out how to UNSolder something, I guess.

The weekend was a good event after all. I got the Gauntlet reassembled and a coat of bondo has made all the difference. I also got the shoulder bell printed and glued together, and the right bicep printed. Tonight I'll do the right glove plate and that'll be all the upper body parts aside from the chest and the right gauntlet. Anyone else out there trying this on a small printer? I was reading a thread on the PDF about a guy printing a full sized Dalek, but I think his printer bed was a little bigger than mine.

Ok, so we all know the world is weird, right? Well, last night I got home and there was a big box in the basement with "3d Printer" on it. I looked inside, and sure enough, there WAS a 3d printer in there.
Turns out, my eldest daughter's boyfriend's parents (got that?) had decided to get rid of this printer, and thought of me. The only condition was that I print off a model of their business product: A "Dwelly". Google it, because I don't think I'm allowed to drop the website here. Anyway, they're mini-houses a little like the old Nissan huts. It'll be tricky to run up a model in Blender, but not impossible, and something worthwhile to shoot for. meanwhile, I have a second printer with a bed large enough to print the next gauntlet in two pieces, not five!
For the curious, it's a basic model Tinkerine Ditto Pro. I don't have the dimensions of the print bed, but it's taller and wider than my FlashForge Finder. Pics to come later!

This new printer, it's a gift horse, ok? So I'm not looking it in the mouth or anything, but....

I ran a test print of the little glove plate support I designed and it came out ok. I wanted to try and use the thing to its full potential, so I loaded up the file for the top half of the gauntlet I needed. It's essentially an excitingly chunky cylinder.
Lucky for me, I stuck around for the printing. The start was ok, but after an hour the print wasn't much more than a centimeter thick, and the infil was pretty tight for something I had selected to be "sparse". Worse, the timer indicated another 28 hours of printing were to come. Total print time of 29 hours for HALF the finished piece? That didn't sound right.
Also, there was this:

There's supposed to be a hole in the middle for you to put your arm through. But for some reason the machine is filling that bit in.

The biggest lesson I am learning from this is that 3d printing is not *just* a production method, it's a hobby, a learned skill and an ongoing process. I've fiddled with my first printer and software enough that I am pretty much at the point of setting it going and walking away. I think this new thing is going to be a hand-holding, low-importance print job effort for some time to come.

Here's a counterpoint to the whining:
Mrs Dim's Helmet, getting additional detail work, more attention than I usually give to one of my projects when it gets to this point. Alongside is the printed gauntlet in its first coat of primer, and the right shoulder bell and bicep piece with a coat of bondo (the last of my current tin). Lastly, there's Mrs Dim's breastplate getting a few scrapes of bondo. Again, the surfacing work being done on that is more intense than I usually manage.

Continuing my rehabillitation of the new machine, I've printed off about a third of the model I've been asked to make, and then set it to work on a simpler piece - the first slice of chest armour. I think it'll take about twelve of these pieces to make the full front of the chest, but that's fewer than I would get away with using my Finder.

The surface is nice and the piece feels solid without being heavy.
Meanwhile, the Finder has been chugging away at the Right Gauntlet:

One more piece to go, then I need to buy more bondo for surfacing. Going to be a LOT of surfacing for all these pieces!

I do not NEED an E-11.
I do not.
Should NOT have printed off those plans. Didn't print right anyway.
Which is good.
Too busy to start ANOTHER project.
Especially one for something I do not need.

Today's printing is nearly done, and overall it's been a success!
First of all, here are the matched pair of gauntlets - full size, one in need of some surfacing work, the other in need of LOTS of surfacing work...

My other achievement today has been wrestling Blender to a standstill over this model I'm supposed to be providing as payment for the new machine. For some reason, trying the same thing I did yesterday and the day before without success has worked fine today. I made a front wall, complete with cutouts for the double doors and windows. My Finder is printing out the first half of the curved roof right now. It may even fit.

Until the Tinkerine turned up, I was very nervous about the prospect of printing the chest, because I'd have to cut it up into 13cm X 13cm sections. The Tinkerine can handle a little more than that, but the software it slices with doesn't seem to allow actual cutting (odd for a "slicing" program, but there you go). Still I can use the FlashForge software to actually cut the pieces, save them as .STLs and import them to Tinkerine Cloud.
All of which is a long way to say I now have TWO pieces of the front of the chest! Ten more to go!

RPF PREMIUM MEMBER
You can use meshmixer to slice anything and export the pieces - then you open those in your regular printer program.