There's a trivia entry on ROTJ stating that McDiarmid and Prowse never met cuz whenever there was a shared scene Vader was Bob Anderson. Anyone knows where on earth that comes from? The hangar scene is 100% Prowse just by the stature and walk and I'm sure I read somewhere that when the rig system on McDiarmid failed during the scene where he is thrown down the shaft Prowse just offered to bench-press him...

Mara Jade's Father said:
Once again an opinion. Mostly when ai read these complaints, fans are whining about the story not developing in the way they wanted. It’s like saying Old Yeller is a bad movie because they don’t like the ending.
Click to expand...

As I've said previously I had no preconceived notions about what the story would be for 7, 8, and 9 when they announced the sale to Disney.

Psab keel said:
If I'm being fair though I remember loving Tales from the Mos Eisley Cantina, Tales of the Bounty Hunters, and Tales from Jabba's Palace and loving all of them when I read them as a teenager but I'm not sure I'd feel the same way now.
Click to expand...

I tried reading that a few months back and I totally agree. Instead of doing original stories about the characters, almost all of them are "And then I was sitting there and I heard the bartender say 'No blasters!' and this old guy cut his arm off!" It was literally that from the point of view of ten bar aliens. Some of the other Tales of books were much better. The bounty hunter one was better but there was still a lot of "and then we heard Vader tell Boba Fett 'no disintegrations..." again from the POV of the others.

I love Kyle Katarn, but please Disney/2020 don't do this to us: Shia LaBeouf Reportedly Eyed To Play Popular Star Wars Character

I know Shia has had a little Renaissance, but he’s NOT right for Kyle

RPF PREMIUM MEMBER
That site isn't exactly the most reliable when it comes to movie news. I actually like him as an actor though I don't know anything about the character so I couldn't weigh in on whether he's a good choice or not, though I was always under the impression that Kyle was in his 40's?
Last edited: Oct 21, 2020

Kyle is a very 90s character, he’s basically Luke and Han rolled into one, but he’s a straight shooter as far as his personality goes. I feel like Shia has an inherent edginess that doesn’t work for the character IMO

RPF PREMIUM MEMBER
I know why everyone questions Shia, but I thought he did amazing in the movie Fury

Don't get me wrong, I don't have a problem with him as an actor, just not for that part. I'm also guessing the story might be a fanboy dream. I saw one last week that said a Darth Bane movie or show was coming, which I would also doubt.

Sluis Van Shipyards said:
Don't get me wrong, I don't have a problem with him as an actor, just not for that part. I'm also guessing the story might be a fanboy dream. I saw one last week that said a Darth Bane movie or show was coming, which I would also doubt.
Click to expand...

Yeah I think the transformers series gave him the type cast of “even Stevens” the very Spazzy, screaming, yelling kid

I could get behind it if Shia is cast as Jaxxon. Come on. We need that character in a movie like Solo 2. (Duo?)


Psab keel said:
I had no preconceived notions about what the story would be for 7, 8, and 9 when they announced the sale to Disney.
Click to expand...

We all had ideas, mostly from the various incarnations of the EU, and honestly, a lot of them came true:
-Han and Leia's son turned bad and betrayed Luke's Jedi school
-There was a young woman who was both an ace pilot and a powerful Jedi and just awesome at everything. In the EU it was Han and Leia's daughter. In the movies, it's Rey.
- Palpatine came back through cloning or some other Sith magic.
- Luke wasn't the perfectly good superhero that people expected.
And I think we all expected Han was a goner.

RPF PREMIUM MEMBER
When the sale was announced they also announced that the EU was no longer considered canon or quasi canon and that 7, 8, and 9 would not be beholden to them, going so far as to create a video to announce that the EU was now coined as Legends and was an alternate timeline outside Disney's new official canon. So at that point I didn't know what to expect.

As much as I loved the EU growing up, as a writer myself I was relieved that they weren't going to limit themselves to those existing storylines, not to mention much of them would have to be retconned anyway to account for the ages of the original cast.

In hindsight you could argue that a lot of those ideas from the EU were recycled into the ST but in 2012 it was anyone's guess. Though you have to consider there are huge sections of the Fandom that had no interest in the EU at all, so that argument doesn't hold water in their case either because they didn't know the content of those books and they still hated the ST all the same.

This very forum has proven that there were many directions the story could have gone with members here proposing ideas that far surpassed what Lucasfilm delivered. Even so, if the official films had been executed better, with a more consistent plot and character motivations I think most of us would have been on board, or at the least would have been far less critical.

It just feel disengenuous to honestly argue that ST detractors didn't like the film's because they didn't fit into their head canon. To me that's a cop out to dismiss any critical thought on the matter instead of being frank about the creative choices that were made. Otherwise we aren't having a genuine discussion and we are being told to like it no matter what we were given, or we aren't true fans. If we are going to dismiss critical thought entirely then we are all wasting our time here.

I'm critical because I care too much about this series and perhaps that says more about me than I like to admit but here I am openly saying it anyway because I'd rather be sincere about it than lie to try and save face. I'm glad a lot of fans enjoyed the ST, often qualifying 90% of my posts with this exact sentiment, but there are a lot of fans I've encountered over the last 5 years that vehemently disagree with me and won't allow for any dissenting opinions, rather than allowing us to each agree to disagree on the matter.

I'm not suggesting all ST fans do this, because I'm friends with lots of people who disagree with me on a variety of subjects that actually matter and not just Star Wars. It's just incredibly frustrating to be dismissed by the fans who would rather tell me to politely, and sometimes not so politely, to shut up.

And when I'm out of line, I've been checked on it and rightly so, and I'm not so arrogant to deny it, and I've apologized often when I've crossed a line. Sadly I can't say the same for some of the fans I've encountered.

But to get us back on topic the ST sucks royally but there is room enough for everyone in this Fandom no matter what you like.

Going back to the earlier discussion of the comic stories that has Luke using the yellow lightsaber, here is the latest cover... 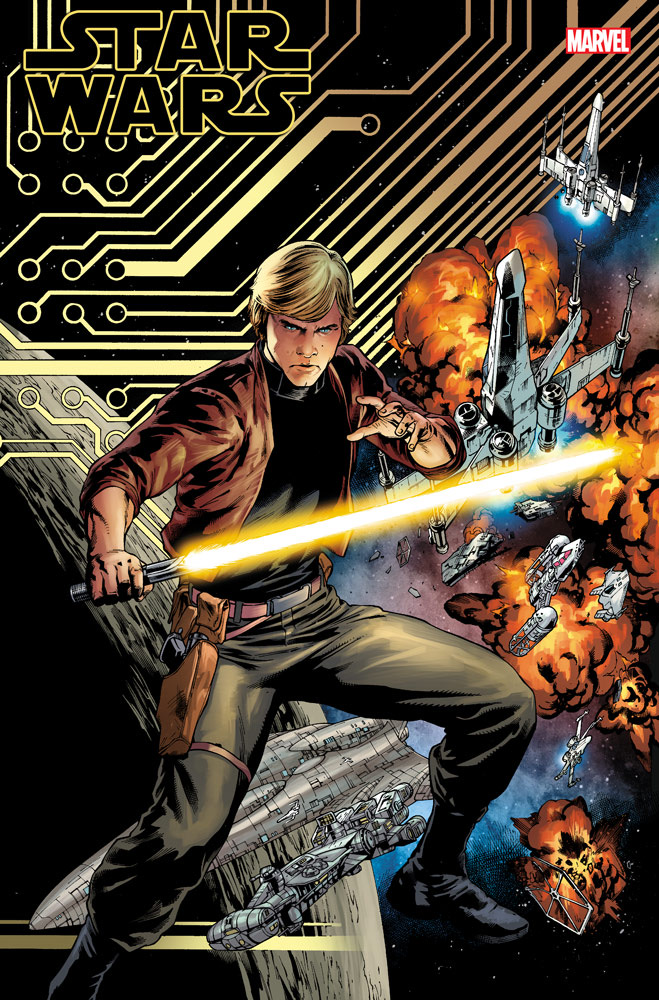 I’m posting it because I just like seeing Luke with the yellow lightsaber like his vintage action figure.

So that’s pretty clearly a Temple Guard saber to my eyes, is that a known plot point?

harrisonp said:
So that’s pretty clearly a Temple Guard saber to my eyes, is that a known plot point?
Click to expand...

I don’t know but that is what I was thinking too and it makes sense.

It actually feels like a very natural explanation, better than him finding some random crystal or dead Jedi saber. If he’s delving into the Force and the history of the Jedi he would very believably find a saber like that. 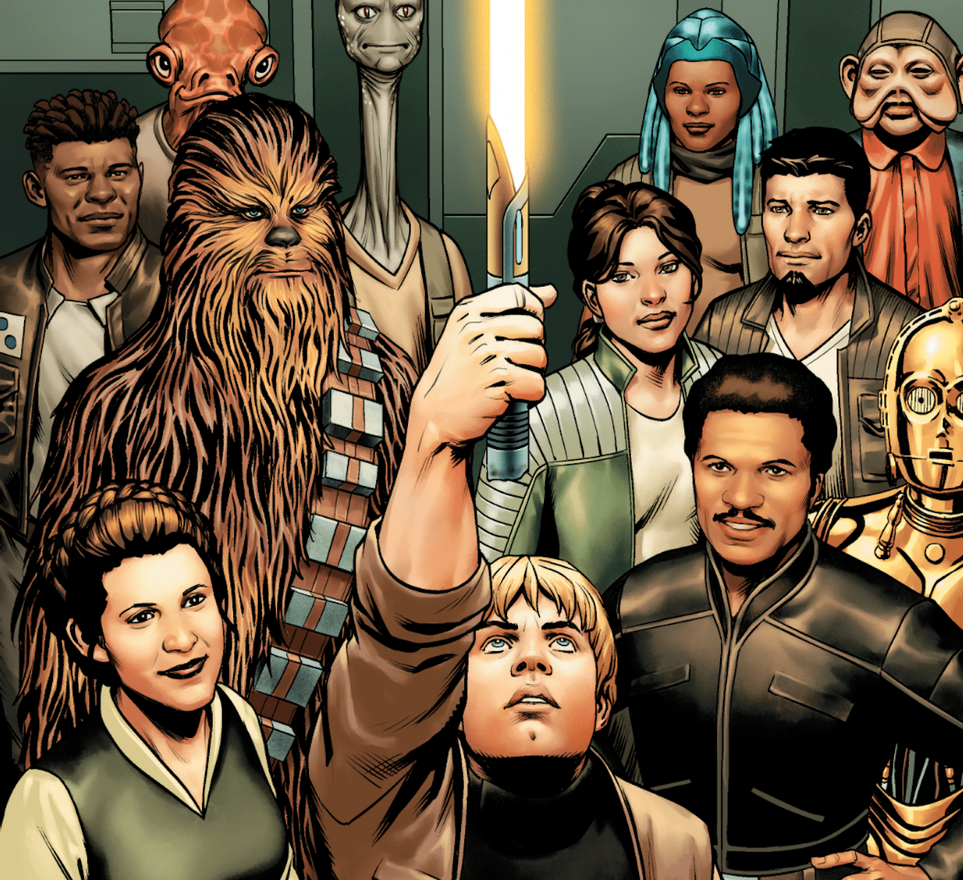 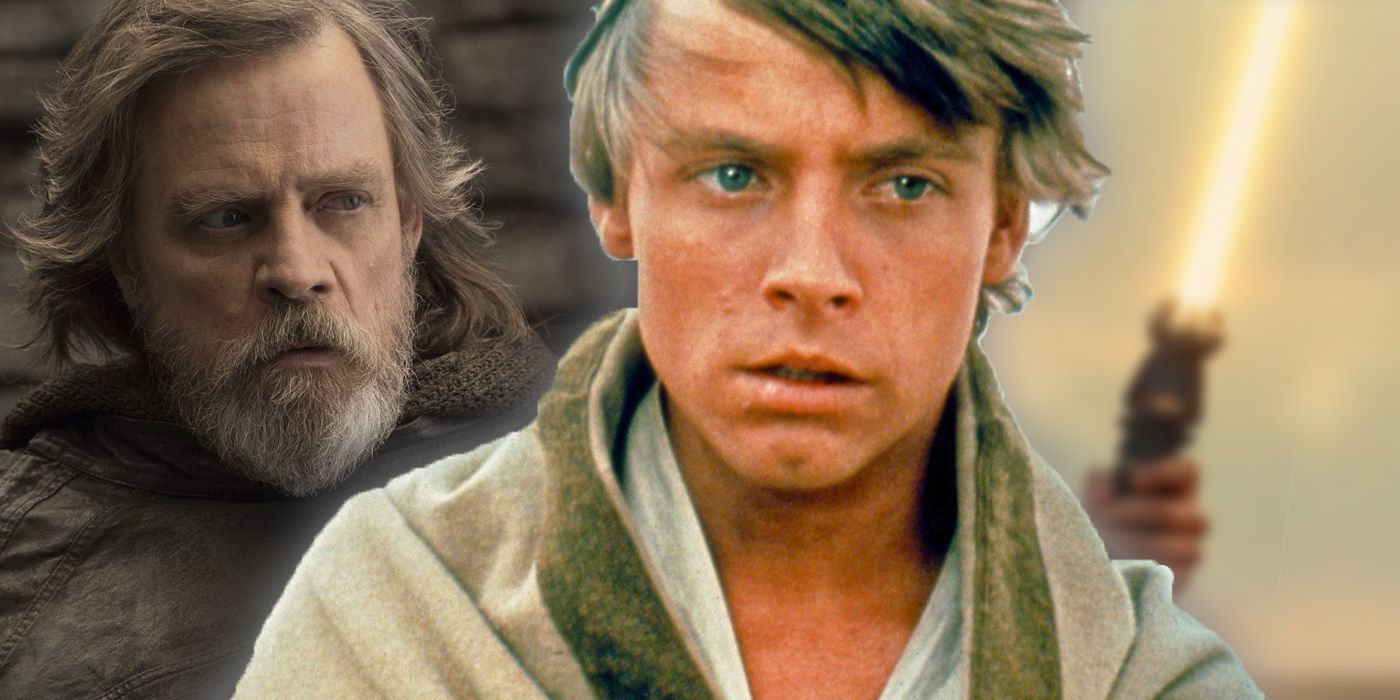 Marvel's Star Wars #6 has revealed that Luke Skywalker's secret weapon comes at a great cost, and the burden of that knowledge will weigh on him.

Verla empathizes with him and agrees to help him if he'll leave her alone afterwards. She sends him to Tempes in the Outer Rim to find a lightsaber at a Jedi outpost she once encountered. It's from the High Republic era. While she advises of a darkness there, Luke eventually goes through the traps at the temple to get his hands on a yellow lightsaber.
Click to expand...

Mara Jade's Father said:
He had plenty of creative people throughout his organization and even before the Disney deal, Lucas has announced his plan to semi retire and had selected Kennedy as his replacement.

Offloading Lucasfilm has allowed George to go back to his film school roots and to make smaller, more personal, esoteric, art house films:

Psab keel said:
But to get us back on topic the ST sucks royally but there is room enough for everyone in this Fandom no matter what you like.
Click to expand...

This drives me up a wall. That's just a subjective opinion, not a objective factual statement. I can say that ST is the most awesome film series ever made, all the live long day, and that doesn't make it true.

Sorry, just had to vent.