The mechanical setup with the gears looks quite complex to me. Have you considered a solution with a cheap ammeter (with a modified scale) which is controlled by PWM through a rotary encoder? 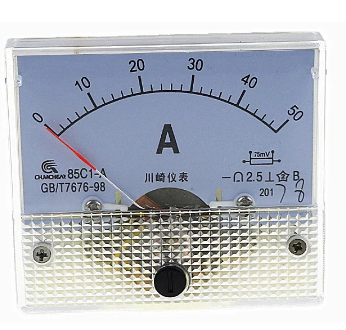 Markus said:
The mechanical setup with the gears looks quite complex to me. Have you considered a solution with a cheap ammeter (with a modified scale) which is controlled by PWM through a rotary encoder?
View attachment 1457540
Click to expand...

Those could be useful for the rad meter, but I think the idea of the radio knob was to get a very specific gear ratio/mechanical feel to them.

I've seen other people use ammeters for the rad meter. I'm probably going to copy this guy.

RPF PREMIUM MEMBER
Markus
Yes, purchased that exact meter years ago, it isn't small enough for the rad gauge. For that I am using the smallest air core motor I could find.

For the radio I need to record the input as well as move the needle. I could read the knob electrically and the move the needle, but this wouldn't have near the tactile feel of a geared knob. Also the knob and needle need to move along the same axis, so there wouldn't be room.

/2018 Status:
The project is continuing, just in fits and starts.


Well, after much thought, I have decided to do what many have asked for: I will be releasing the full CAD files for the Functional Pip-Boy 3000 MK4.


I am releasing these files as a unfinished work. I still intend on going back and making my “master” version someday. But currently I have a new home with its own projects to work on.


If you want to check out my home projects, I will be publishing that project at: www.halfwayupthehill.com. (There isn’t much up at the moment yet)


I am releasing these files for the sake keeping a huge amount of work from going to waste.


I put a ton of work into this design. I have used my years of experience with product design to create what I feel is the most accurate, and faithful version of the Pip-Boy 3000 Mk IV. The design uses real metal hardware, and mixed materials to achieve a look as good as if RobCo built it themselves.


To that end, this design is expensive. There is no way around that without losing out on quality. This is an unfinished design. Do not expect to just order all the parts, and put it together like a model airplane. Lots of work is still needed to even build just one of these.


It is up to the community to continue the work.

Hello, this is my first post to the RPF, but this isn't my first major project by far.

My goal is to create a Pip-boy 3000 Mk IV from the game Fallout 4. Why not just get one of the limited edition models? For one, they are sold out. Two, I don't want a glorified plastic phone case. I want a Pipboy that at least has all the knobs and buttons functional.

The model was created in Solid Edge, and rendered in Keyshot.

My plan is to 3D print the model, however to get the level of detail I want, I will probably use SLS printing. However, the expense of that may change my mind. Currently I am focusing on getting a CAD model that has everything laid out. Making it real can come later.

I want to have everything that should be lit up, lit up. Currently the plan is to try to directly print the RAD gauge and Radio gauge artwork onto a piece of thin acrylic. If that doesn't work, then perhaps a vinyl transfer. To that end I have re-created the two gauges as vector art in CorelDraw.

The RAD gauge will be driven either sudo randomly by a small motor, or perhaps driven like a compass using a set of electromagnets. I don't think I will be able to fit a true Geiger counter in, plus they can be expensive. So currently the plan is to drive the RAD meter with data from a contactless IR temperature sensor. The radio gauge will be connected to a microcontroller and FM radio chip. It may also simply scan through pre-programmed sounds taken from the game. I haven't decided yet.

Solid Edge has been my CAD software of choice for almost a year. It is overkill for a prop, but allows for some serious modeling in a short period of time.
The model as shown here was started just 5 days ago and done in my spare time. By day I am a product engineer so this type of design is right up my alley.
It was created from scratch using reference photos from the game trailer, images of the limited edition model, as well as referencing dragonator's 3D printable model.

The bottom latch will be functional. Thanks again to dragonator for creating a latch that I could then reference. Mine works basically the same as his but with a few changes to make it possibly hold tighter. I also plan on putting magnets it to hold it together until the latch is secured.


The opening in the Pip-boy is scaled to fit my own arm, with some padding added. The rest of the model was scaled by referencing the size of the character's thumb in the demo video of the Pip-Boy.

The holotape mechanism will also be functional and spring loaded. The release button will act as both a latch, and a kicker to push it open. The actual yellow holotape is the only model I copied from dragonator's model, although I scaled it down by 75%. The plan is to put RFID tags into the holotapes, and have those kick off a program on the Android device.

More to come as I get stuff done. I may share the model at some future time when it is more complete. Currently only the outside is done and I have yet to make a scale mock-up.
Click to expand...

Dang, that is a beautiful build. 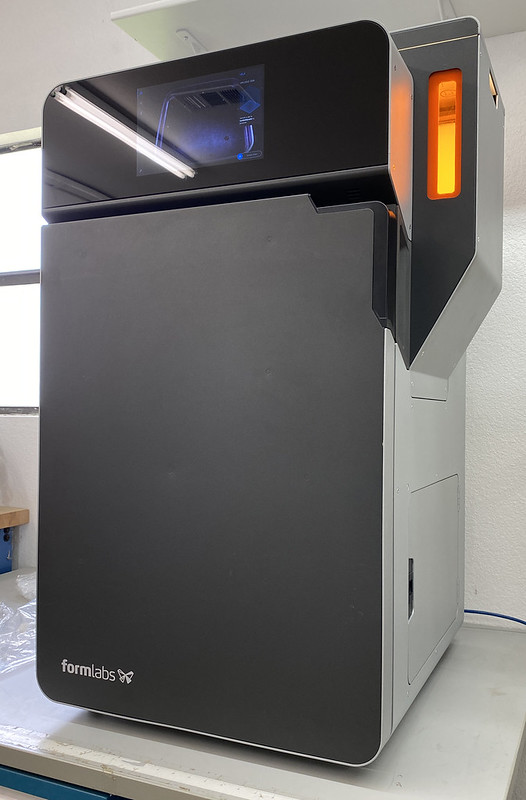 THIS IS HUGE!
Okay it actually about the size of a mini-fridge, but it is a huge step up in being able to 3D print my own parts instead of relying on Shapeways.
This is the Form Labs Fuse 1. The business I work for reserved way back in 2017, and it just arrived this week. Every once and a while I will get to print some personal parts on it. 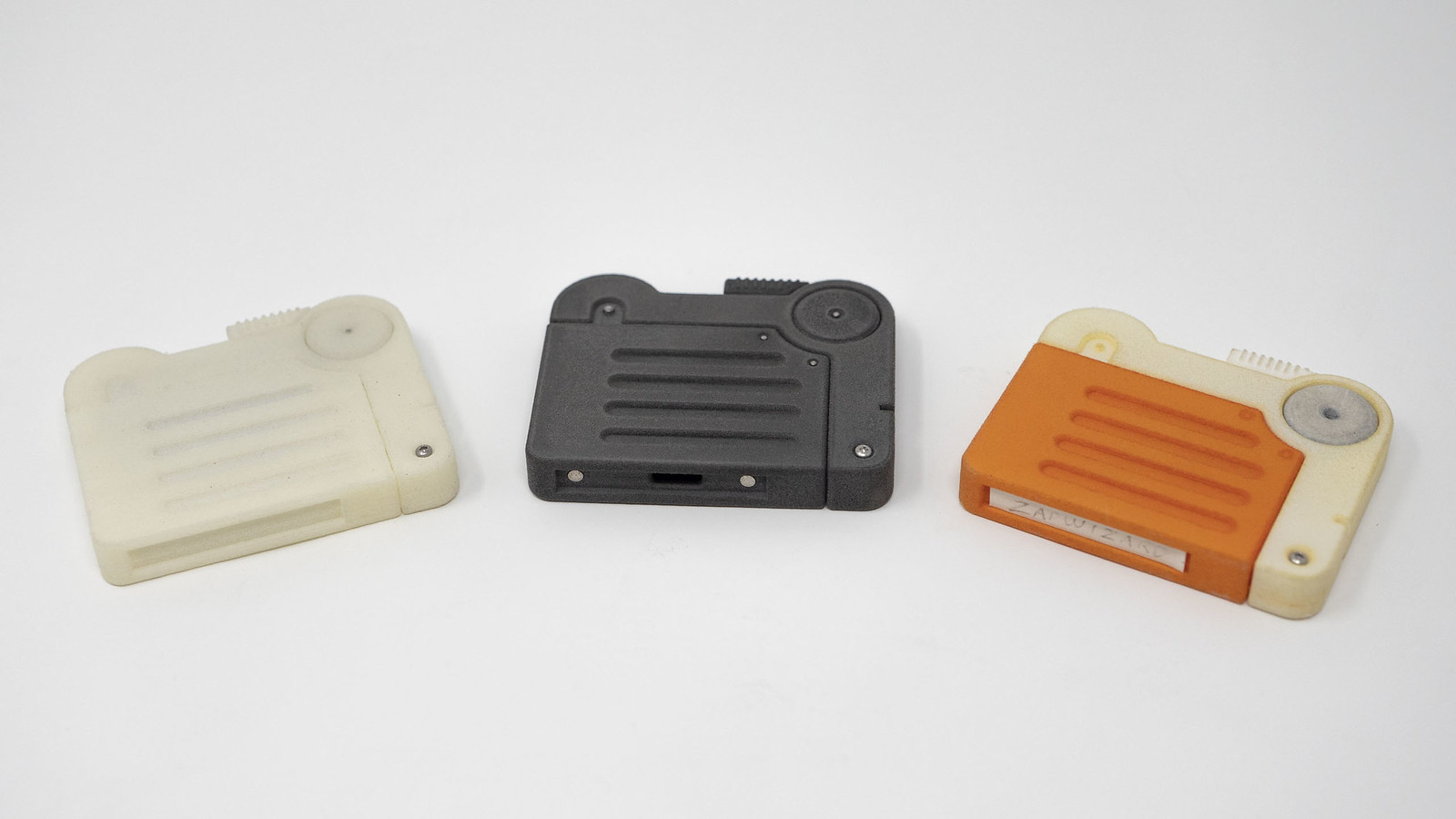 I snuck a set of Holotape parts into the first test print we ran overnight.

The image above shows a raw Shapeways part (Left), compared to a Fuse 1 raw part (middle) and a dyed Shapeways part (right).
The Shapeways parts come as a white nylon, and can be dyed other colors. The Fuse 1 parts are gun-metal grey, so they can't be dyed lighter colors, but can be painted or dyed black.

The parts come out of the machine caked in powder. It took quite a bit of cleanup but I think the results are outstanding. 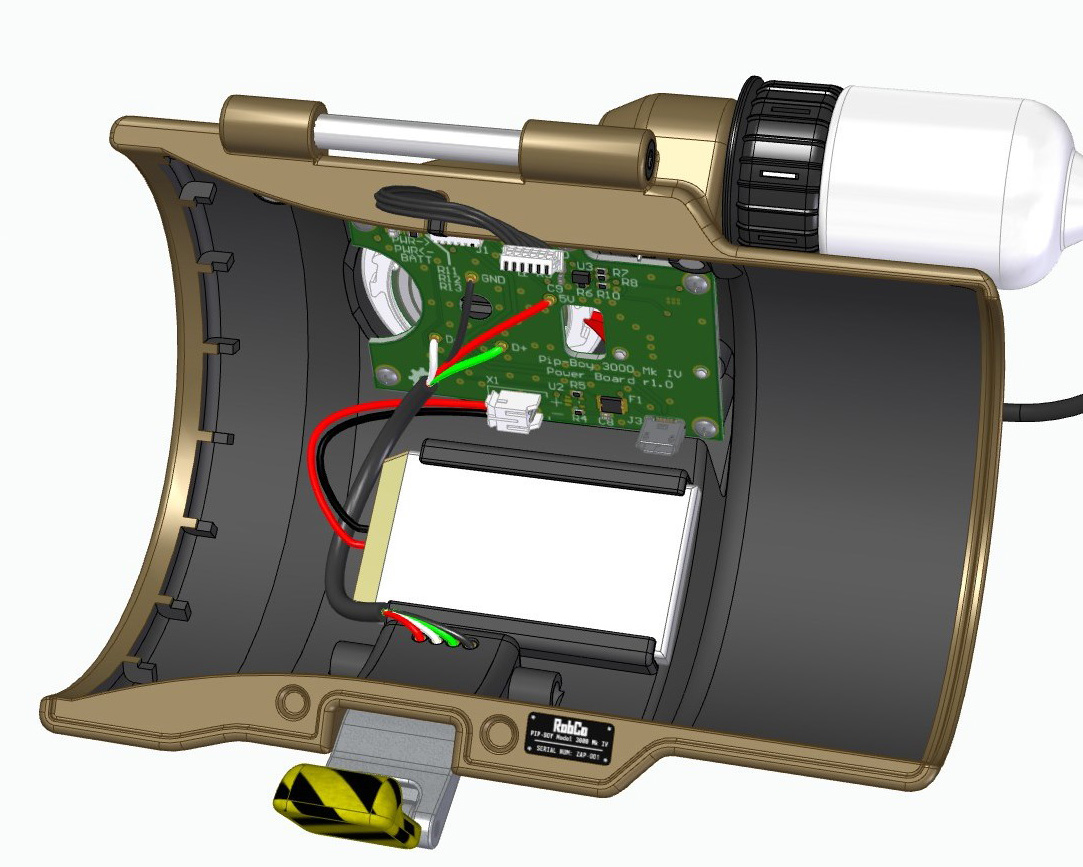 The backside of the Pip-Boy contains the battery, charger and USB circuits. To connect the front electronics to the back I had a wire running across the gap between the two sides. And a large metal pin for the hinge. 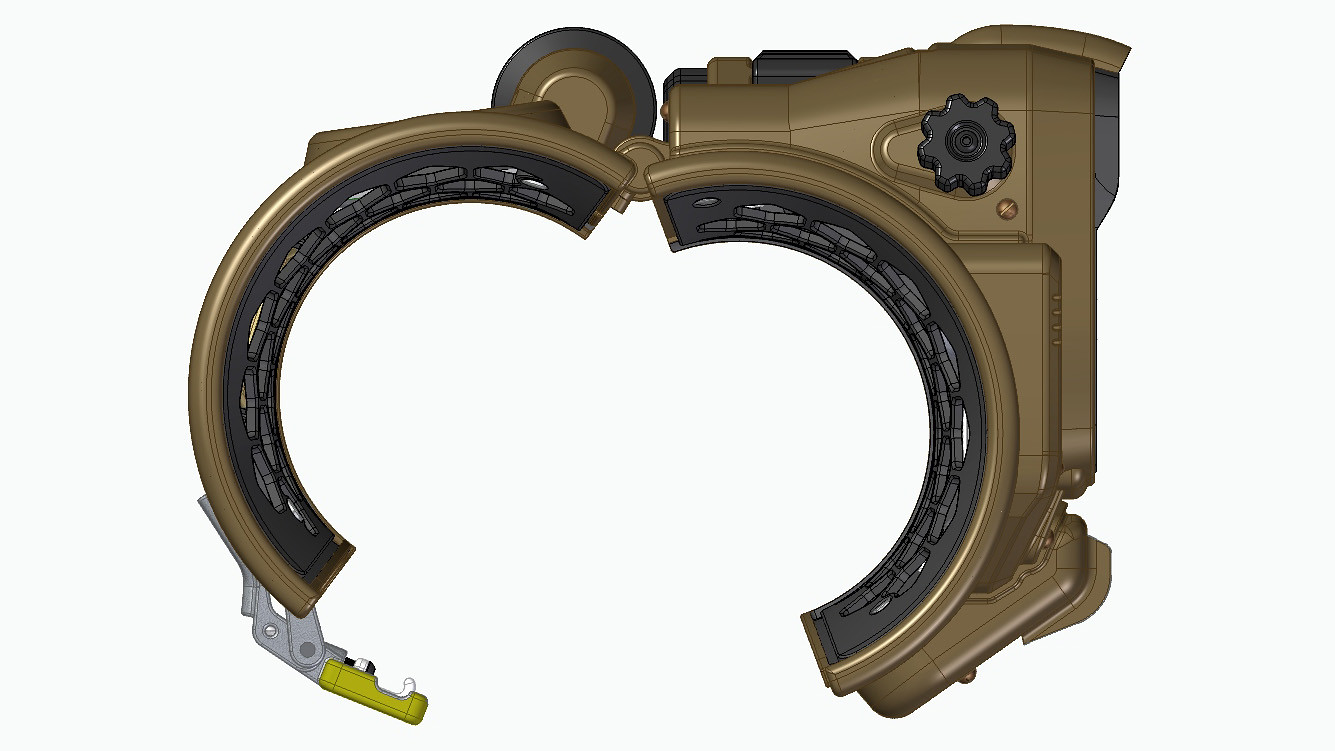 The issue is that the wire would have to extend and retract about an inch each time the Pip-Boy is opened. This will eventually wear out the cable, and in general it is hard to push a wire. Eventually the wire is going to get crushed. 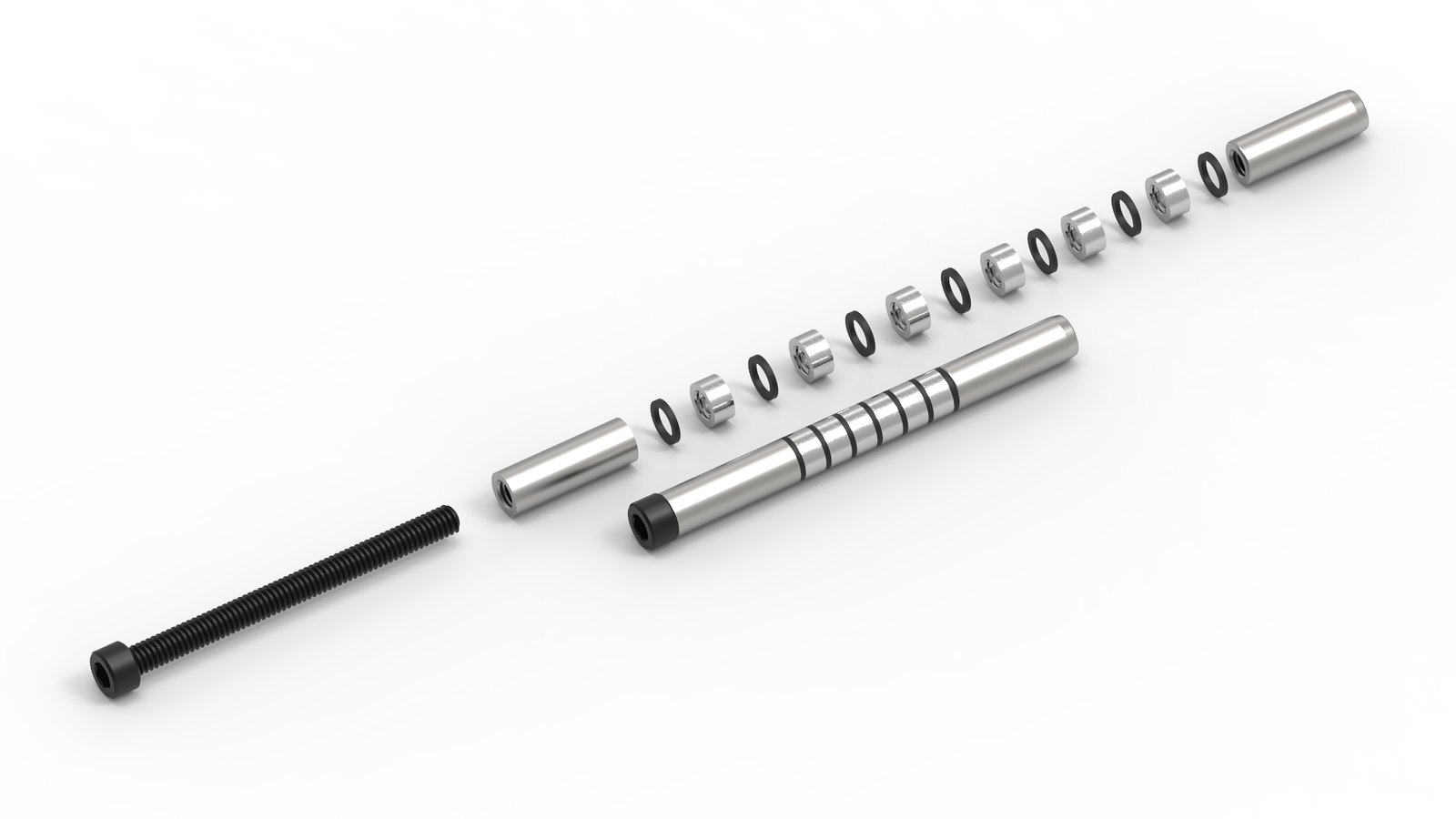 So lets see how complicated I can make the hinge by turning it into a slip-ring electrical connection!
To make a slip-ring hinge I stacked a steel pin, plastic spacers, zinc plated brass spacers, and another steel spacer onto a long nylon screw. 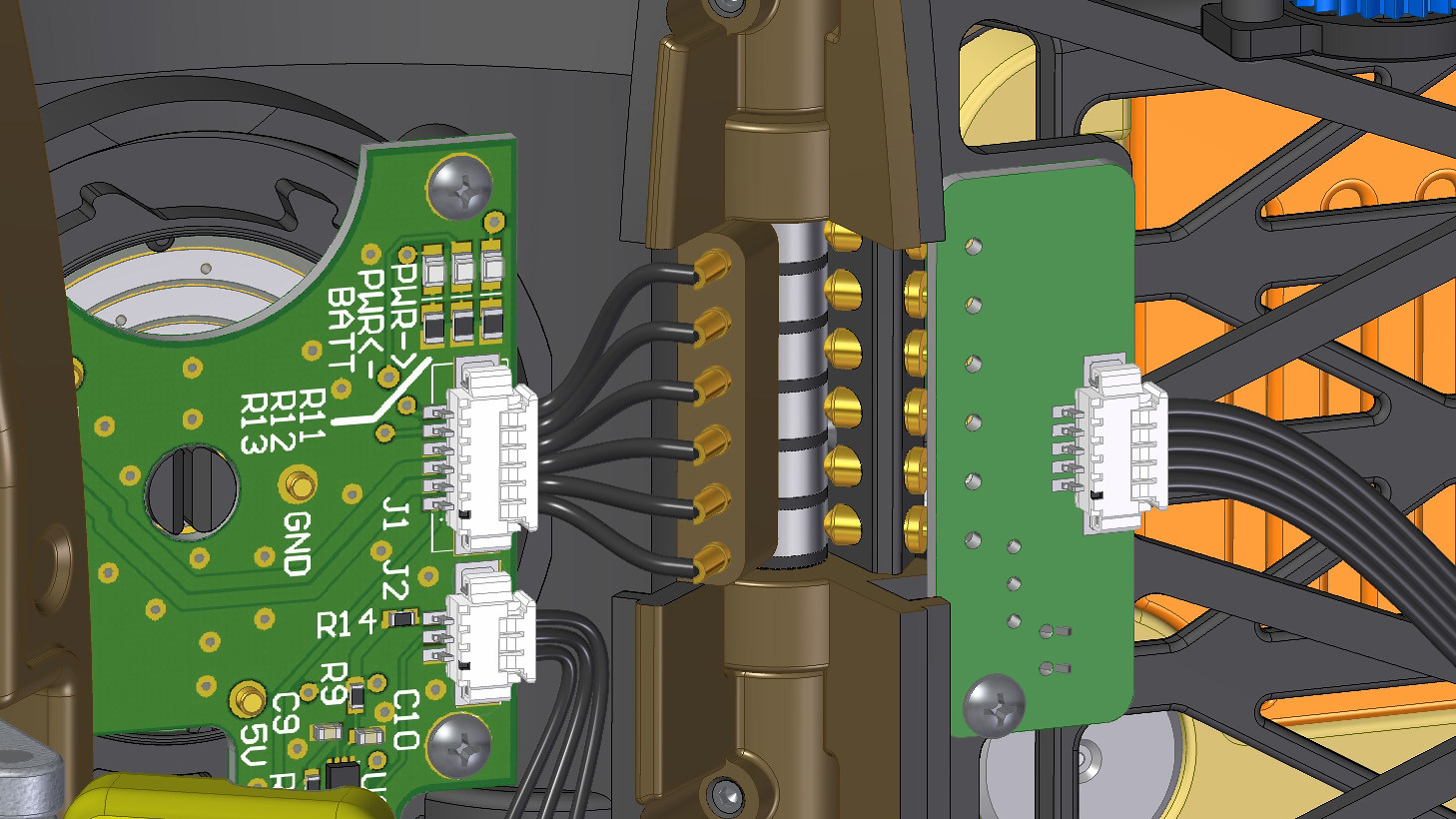 The pin is then locked into the back-half using set-screws. Six regular pogo-pins connect the power board to the slip-ring hinge.
Six roller-ball style pogo-pins are located on the front half and they pick up the power and signals off the slip-ring. 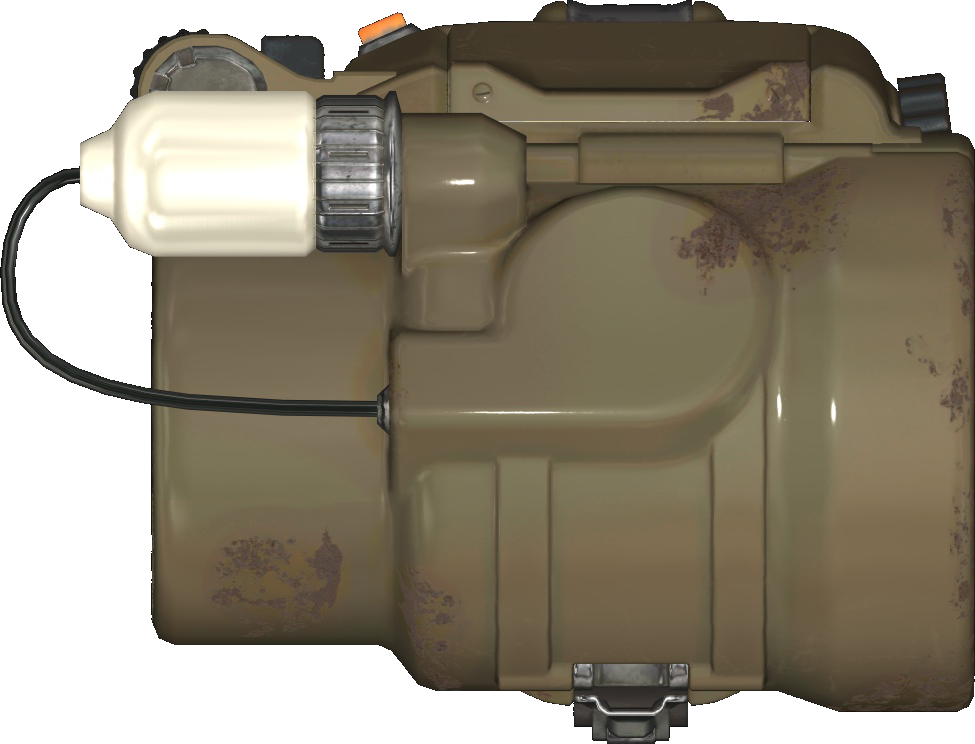 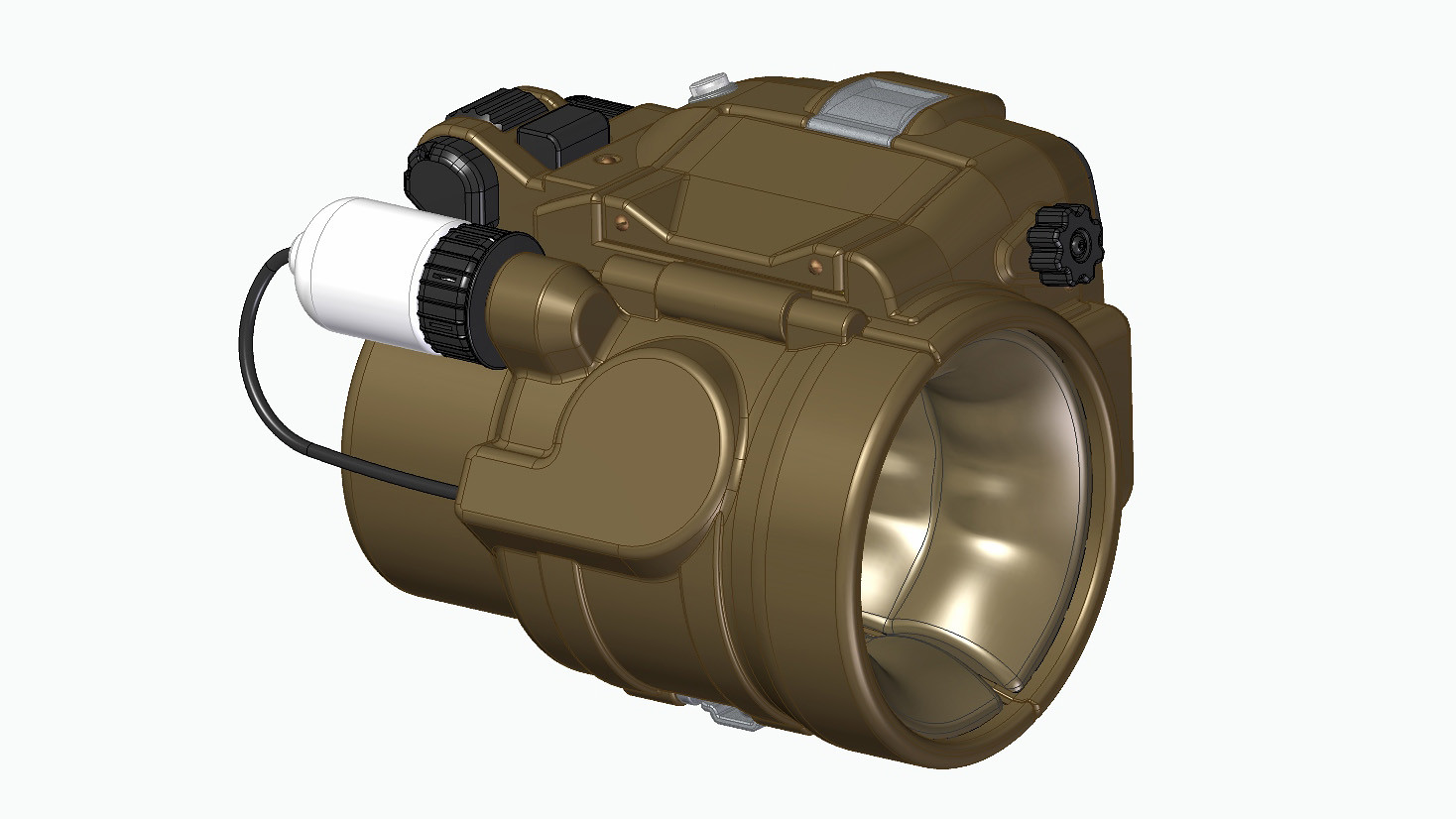 It took quite a few revisions and whole day to work out an electrical connection that is not visible from the outside. I noticed that the middle of the hinge on the in-game Pip-Boy is a larger diameter than the two sides. This was what helped me to get it all to fit with only a tiny gap visible at the backside.
Last edited: May 16, 2021

RPF PREMIUM MEMBER
If it weren't for proprietary intellectual property, I'd want to nominate you for some sort of recognition in the industrial-design arena. You're taking this to places I'd never imagined realistically possible -- and then squaring and cubing it again beyond that.

This is incredible! So much fun to follow.
V

Do you havw all the pictures on your website of the progress so far, in case someone wanted to look and not go through every page on here? I'm pumped you're gunna be working on this again, on and off.

Dude the way you've done those connections though... The build itself is already insanely detailed and precise, but IMO that particular piece of engineering is next level.

RPF PREMIUM MEMBER
Voltaire Surge I have been meaning to make a "without everyone's comments" sort of progress log.

Otherwise I have every image except for the GIFs in a flickr page here: 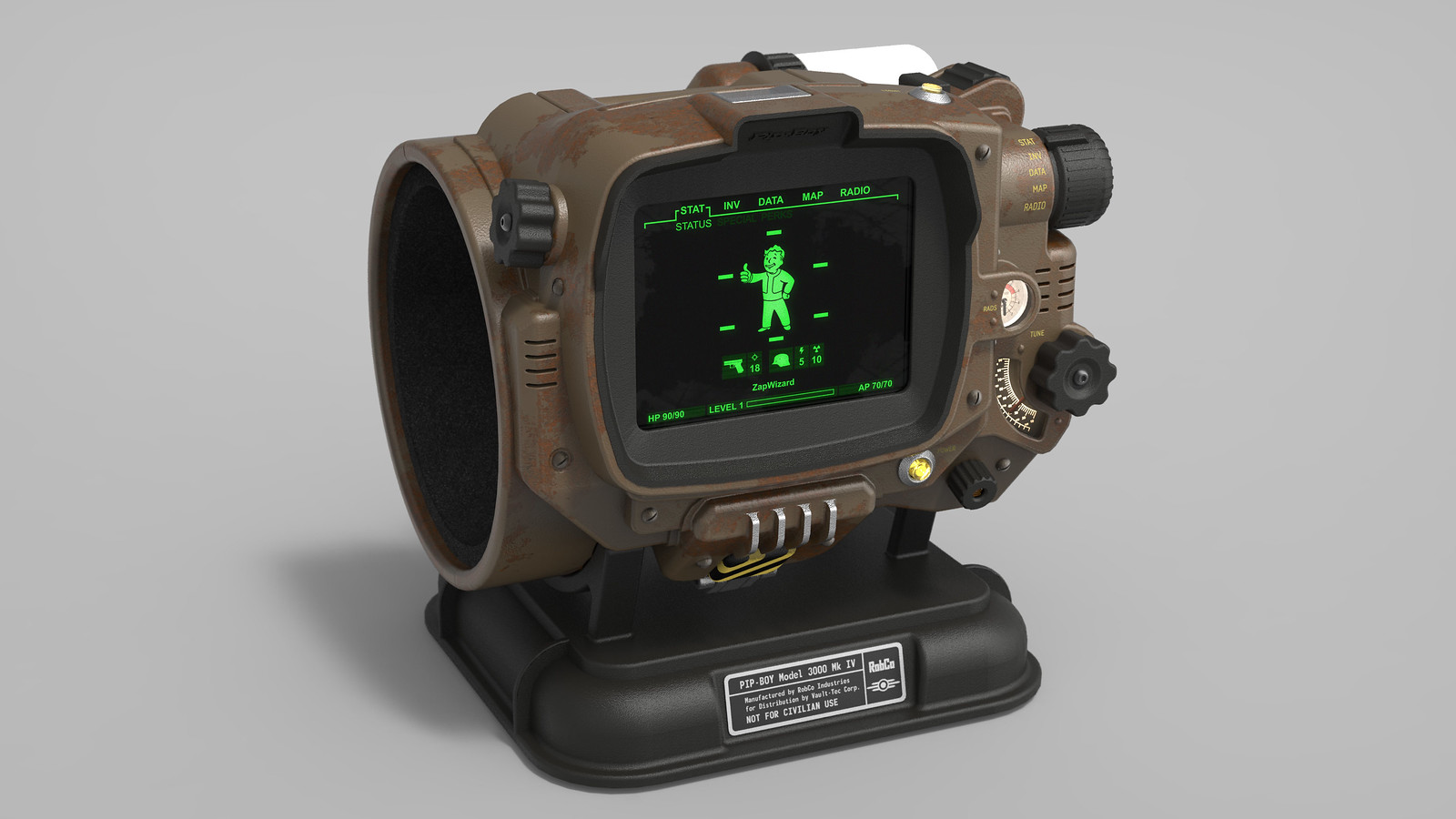 CAD model created from scratch of the Pip-Boy 3000 Mk4. Created in Solid Edge, rendered in Keyshot. Thanks to dragonator for the inspiration and his own model which I referenced.

D
(Scorpion costume from Mortal Kombat) How do I paint a pair of plastic leg guards?