Pensacon has come and gone this year. My sister had a blast with Tom Servo and asked for a Crow for 2015's Christmas. I'm going to build a back pack style carrying system for him so she can comfortably carry both bots. When not on tour he'll have a stand to sit on.

Tom and K-9 as caught by the local radio station. I didn't notice Tom was watching K-9's screen when we put them down. I've started sourcing parts. I bought the face mask and tupperware body parts on Ebay. I think I found some parts for the arms in my parent's new house. It was a foreclosure and is absolutely packed with junk. I've contacted MST3KBots on Etsy to see if he makes anything that's hard to find.

I don't know if I'm going to make Crow talk like Tom. I may rework Tom's sound system and incorporate Crow sounds. Maybe even move the speakers to Crow to make the bots easier to hear. Tom was easily drown out in the convention hall.

Any ideas what paint is best for Crow?

So it begins. I have all my parts (arms are in the garage) and a paint code. So far Crow is definitely more expensive than Tom. 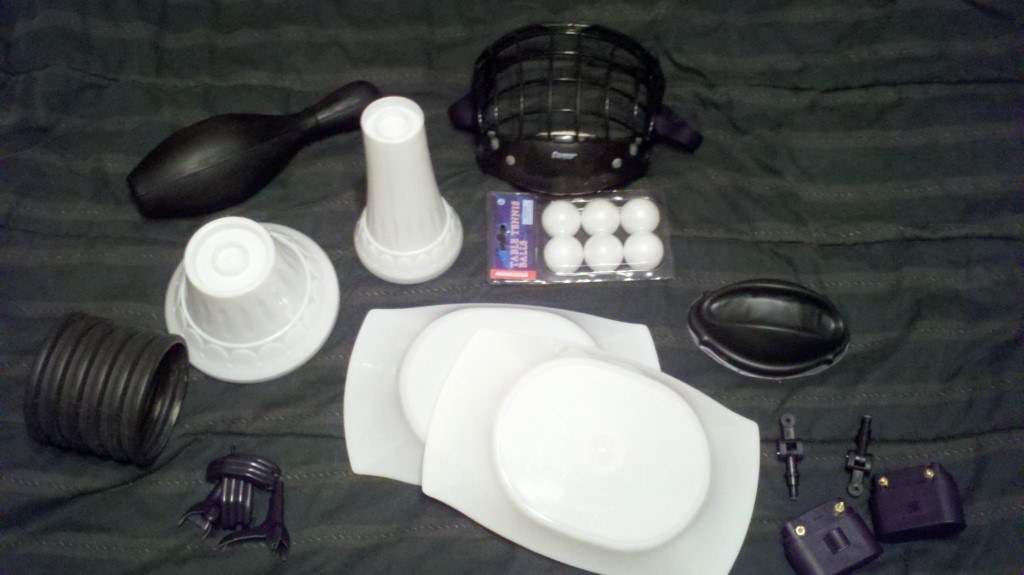 I see a lot of Tom Servo builds, it's nice to see Crow get some love.

This project got sidelined by K-9's new drive system, Chopper getting started, and my DeLorean's engine going "ppffffftttt" (technical term meaning I have to replace the engine). I finally started on Crow today. I only have until Christmas to get this built and wired for sound. It's a present for my sister to go with the Tom I built her last year. 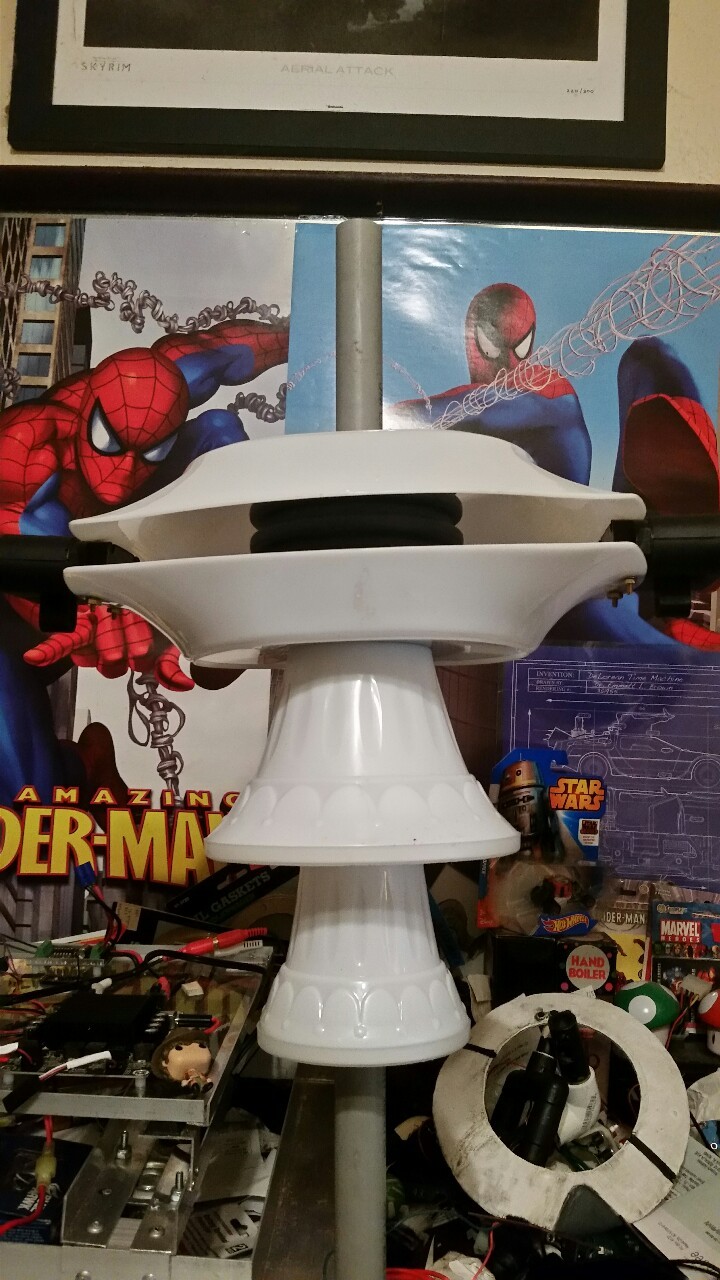 I did a terrible job of cutting the resin bowling pin. I chipped it badly. 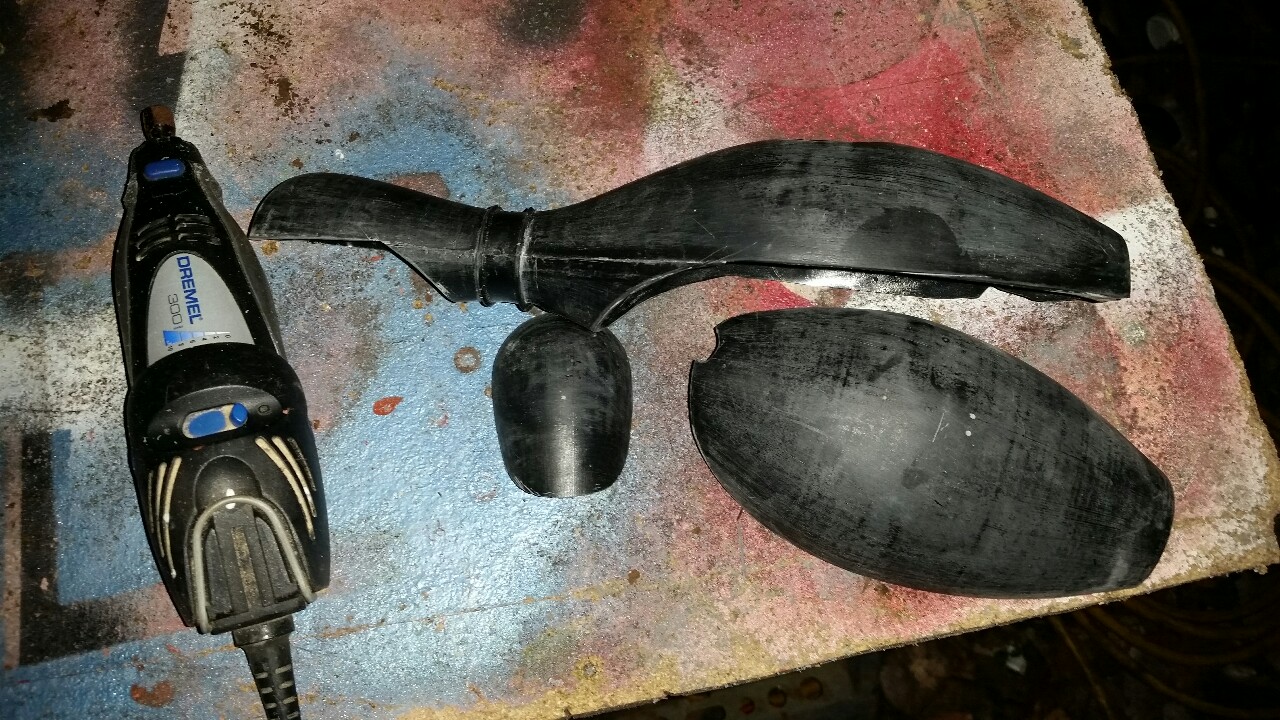 Thankfully, I was able to repair it with some weld-on putty. Patience is a virtue when trying to cut the pin. 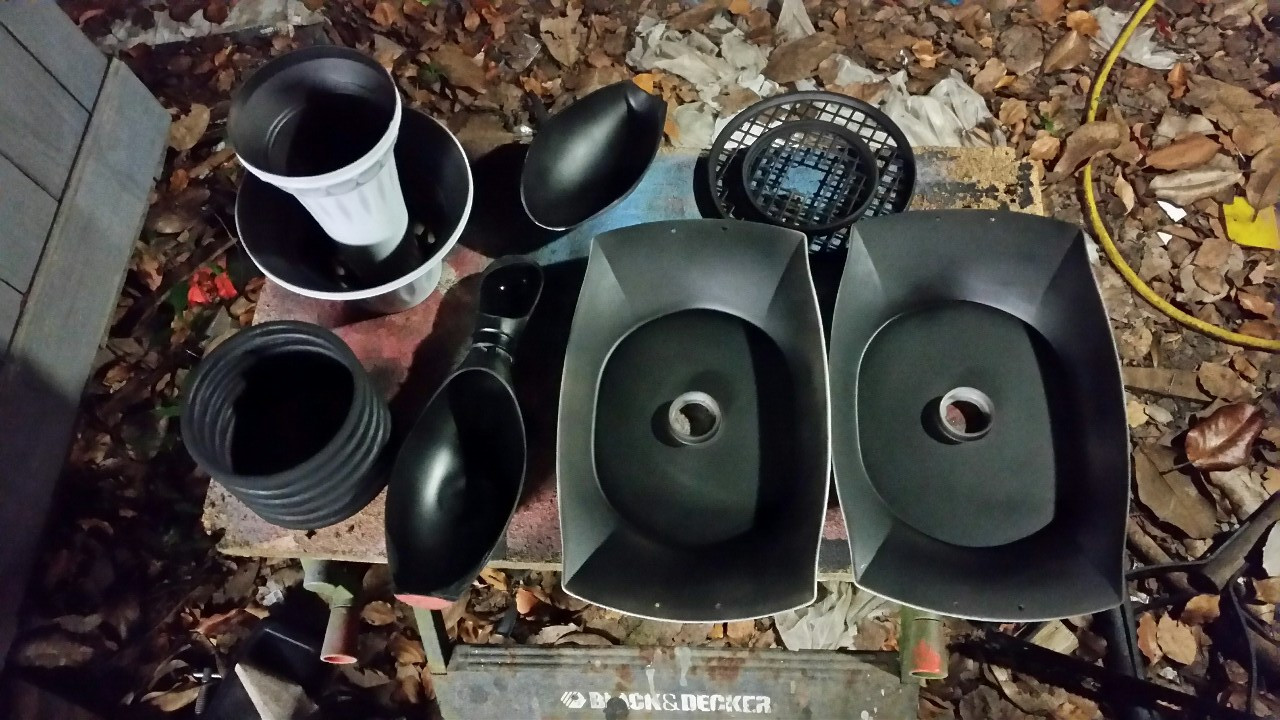 I've downloaded this from Thingiverse: http://www.thingiverse.com/thing:236103 It's a mechanism for the eye movement. I was going to design something myself but I don't have to now. It should be finished printing soon.

Crow looks like a zombie in this photo. Test fitting the printed eye mechanism. So far so good. 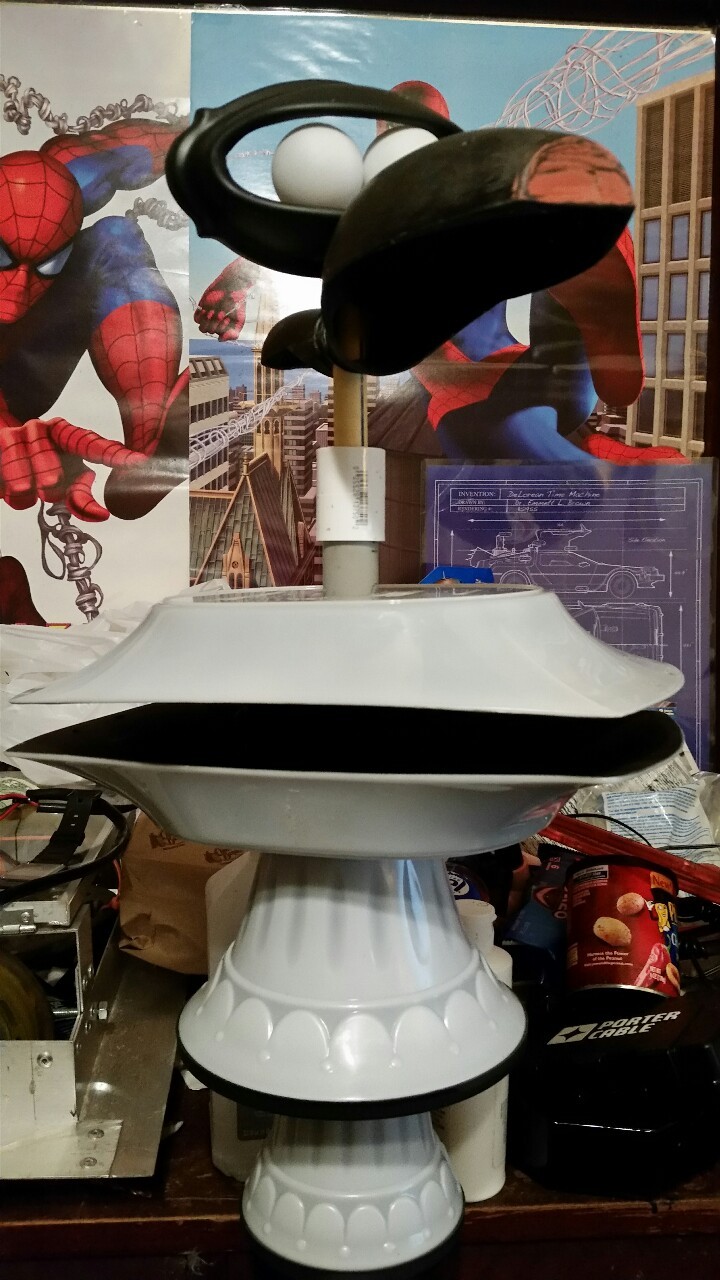 With those black parts he could be the dark specter Timmy.

Here's a little color on Crow. The gold layer went on fairly easily. Unfortunately everything I'd read says the lime gold flake is a real pain to keep from running. 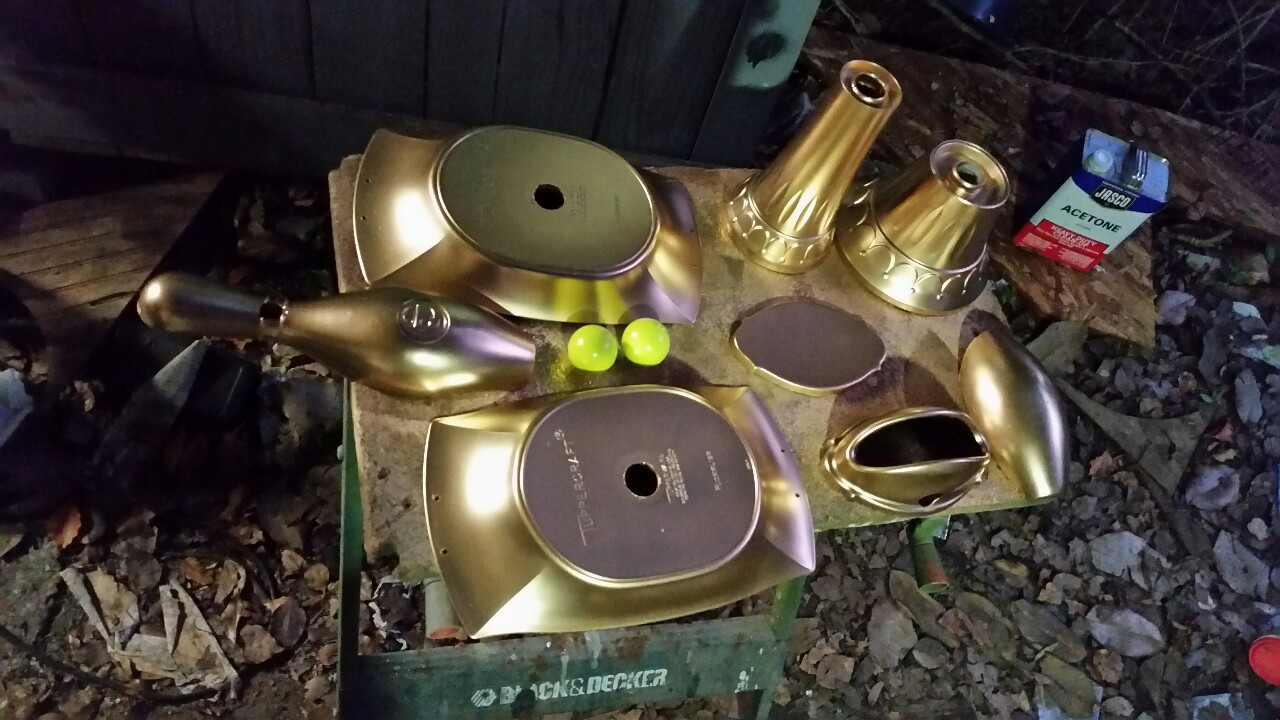 Couldn't help it...had to assemble him instead of sleeping. 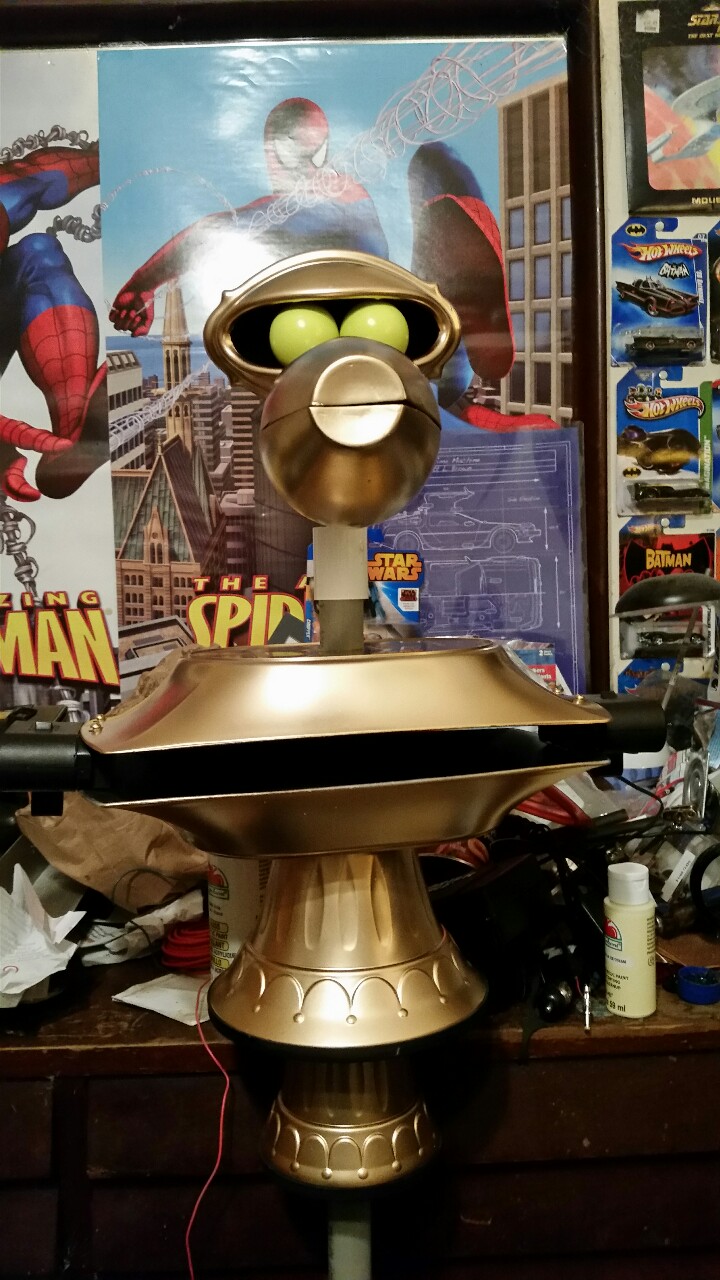 Closeups of his face are hard to take. The camera keeps changing focus between the beak and his eyes. 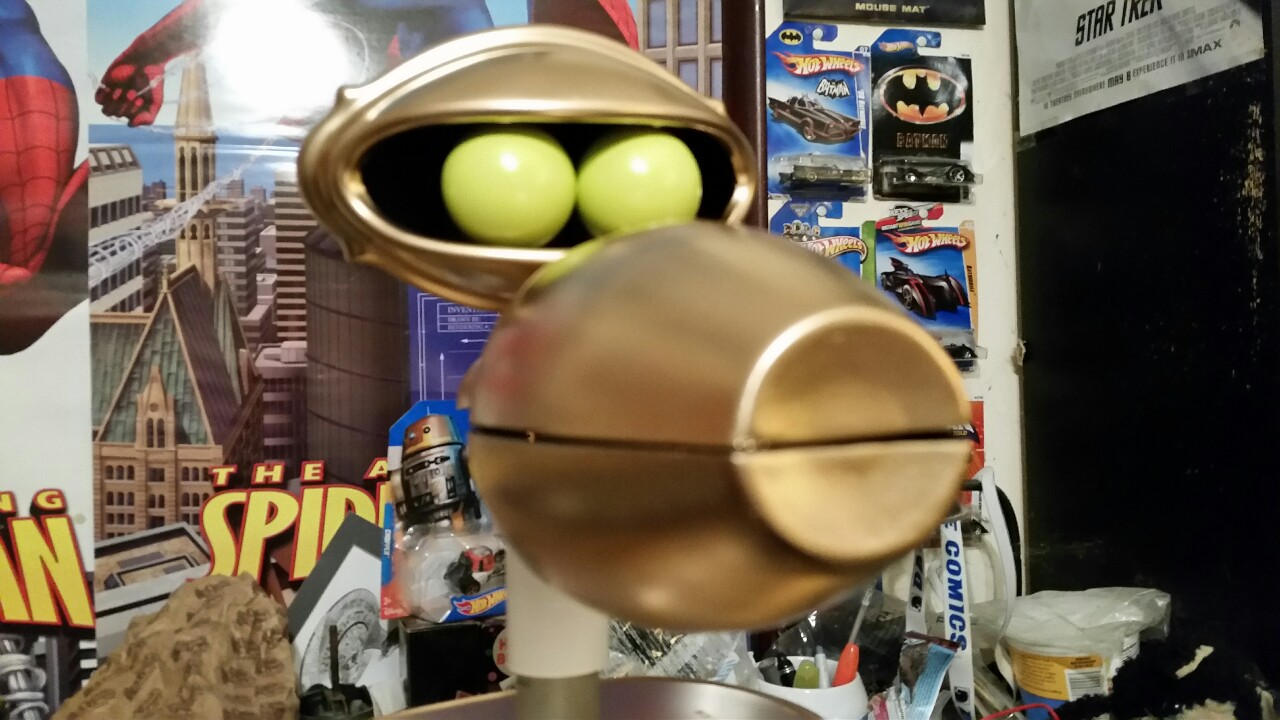 That looks awesome! Cant wait to see how it turns out! Were all the parts 3d printed or vac molded? Did you do a build thread for tom as well?

RPF PREMIUM MEMBER
Are you going to tell him that his name stands for Cybernetic Remotely Operated Woman?

Most of the parts were purchased from MST3KRobots on Etsy. The bowling pin is resin, the eye area is vacuum formed, and the shoulders are resin. I believe the hands are resin as well. I totally lucked out on the lacrosse mask when I found it on Ebay. It went for about half of what they usually do. The arm pieces I managed to get from an old house my parents are renovating. The only 3d printed part so far is the mechanism to make the eyes move. The Tom Servo thread is here: http://www.therpf.com/showthread.php?t=223563

I am definitely not telling him that. He's a lot larger than I thought...he might hurt me.

Here's Crow pretending to be Pac-Man.

I had to paint on his pupils. For some reason after I added the lacrosse mask he looked even creepier without pupils. 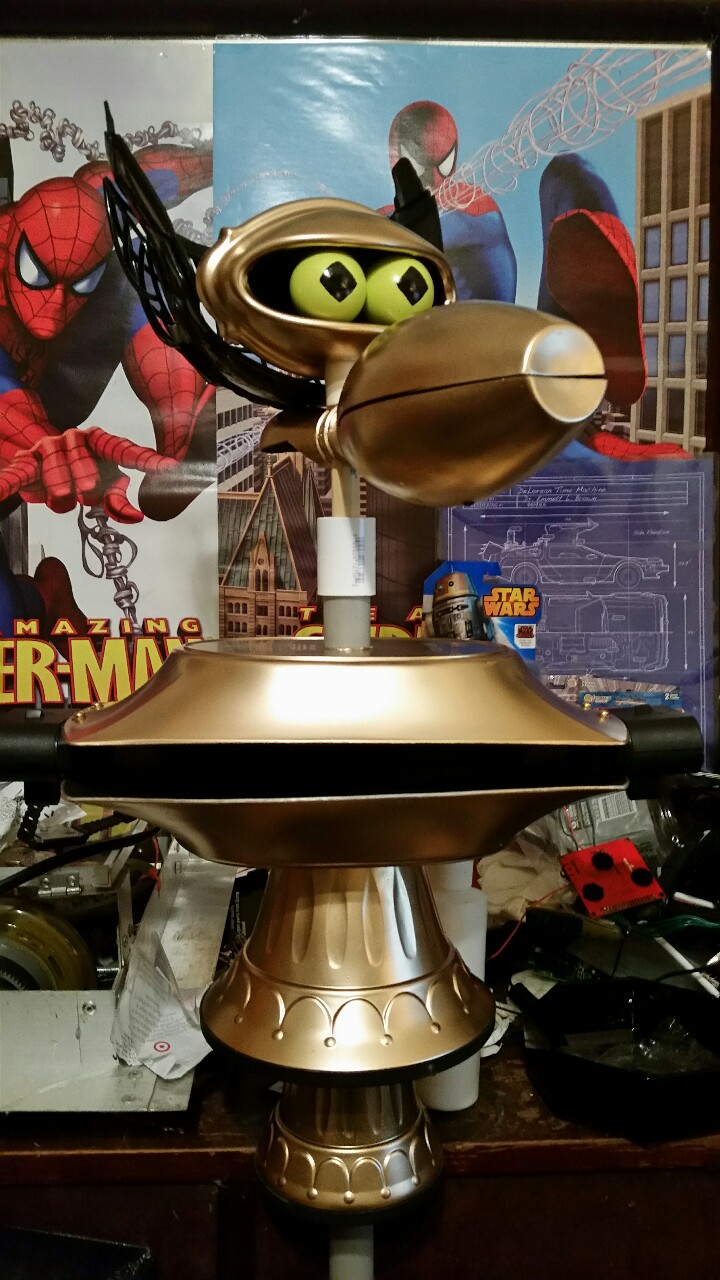 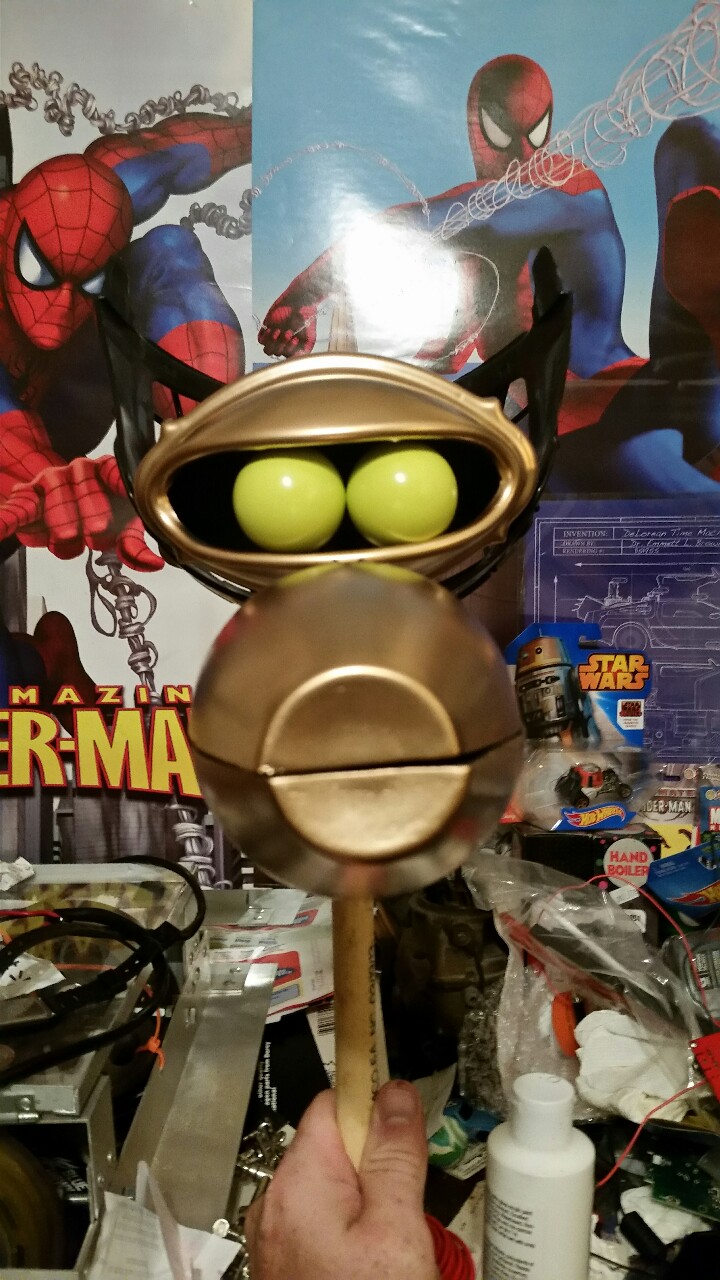 I hope to get the arms assembled tomorrow so I can paint the mask, arms, and hands along with the tubing for the torso. He's getting really close to being a complete puppet. Then I'm getting Tom back from my sister and seeing about getting Crow wired into the mix so they can both speak.

The arms are simple but are interesting. I think they are easily the coolest part of Crow. 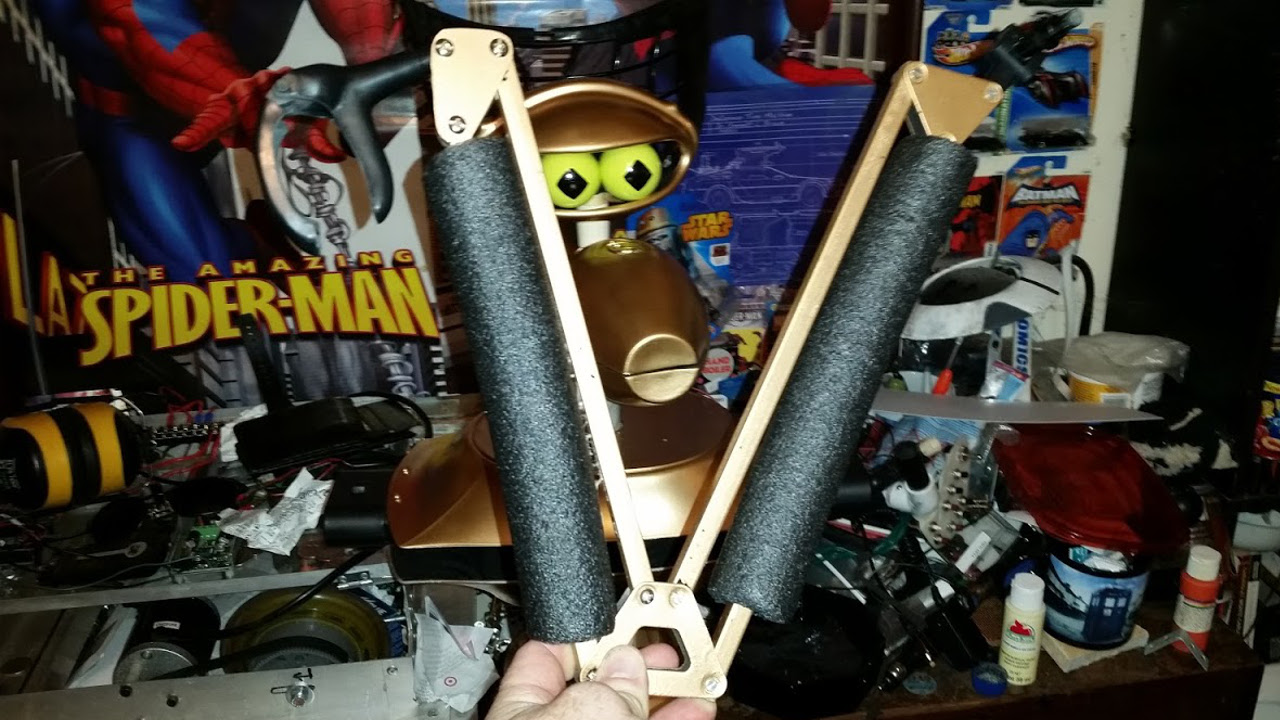 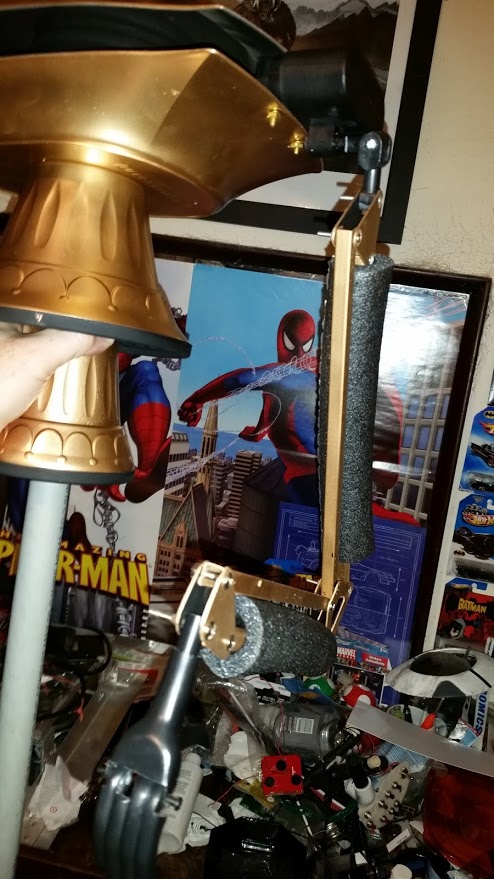 Most of this arm used to be a magnifying lamp I found. I cut the metal beams down to the proper length and drilled new holes. The "wrist" is made of styrene. I just cut a template based on what I saw on the web. I ran out of gold paint or I would have painted his manos.

The lime gold metallic paint is awesome. It really turns that gold puppet into Crow. 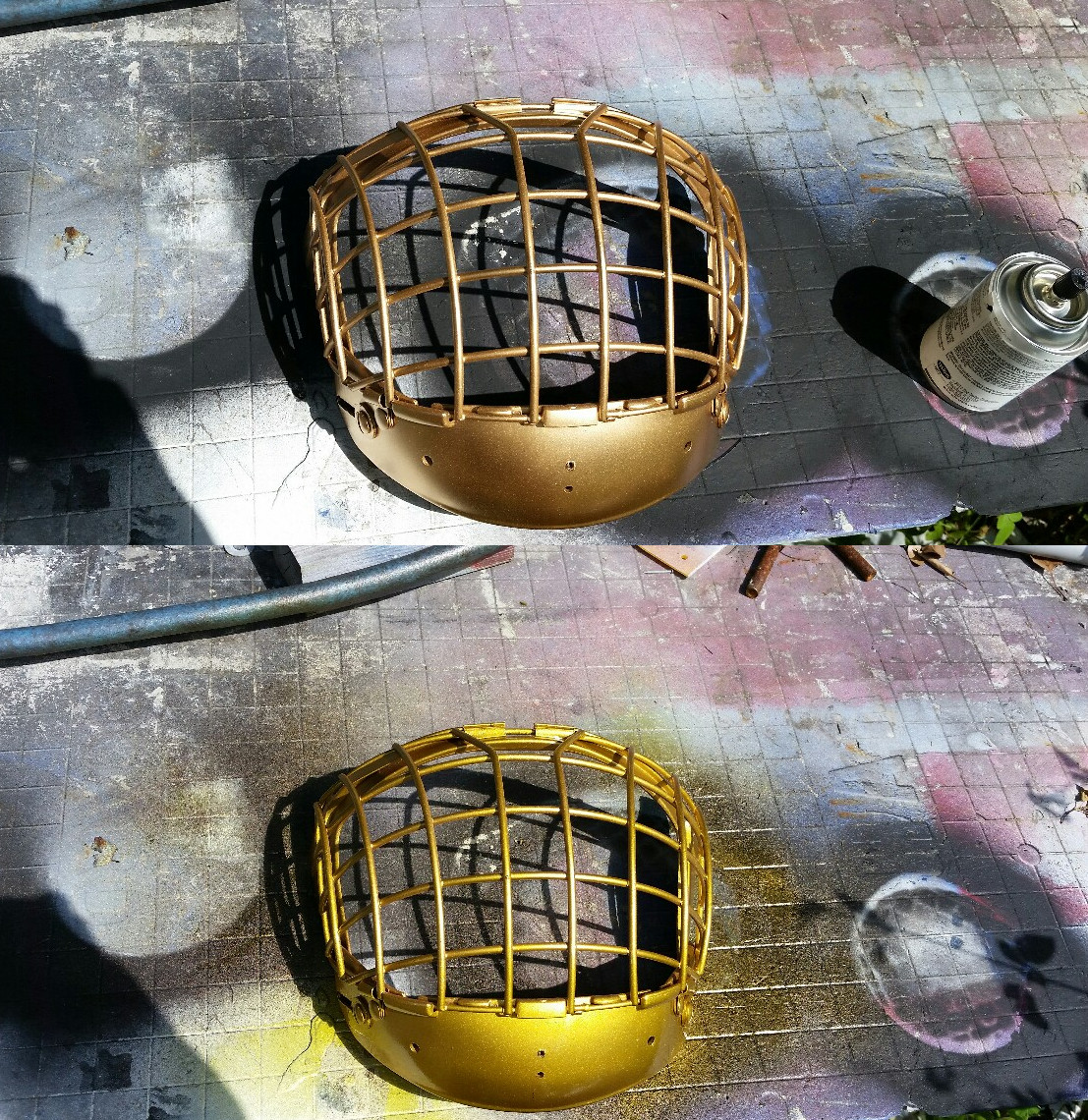 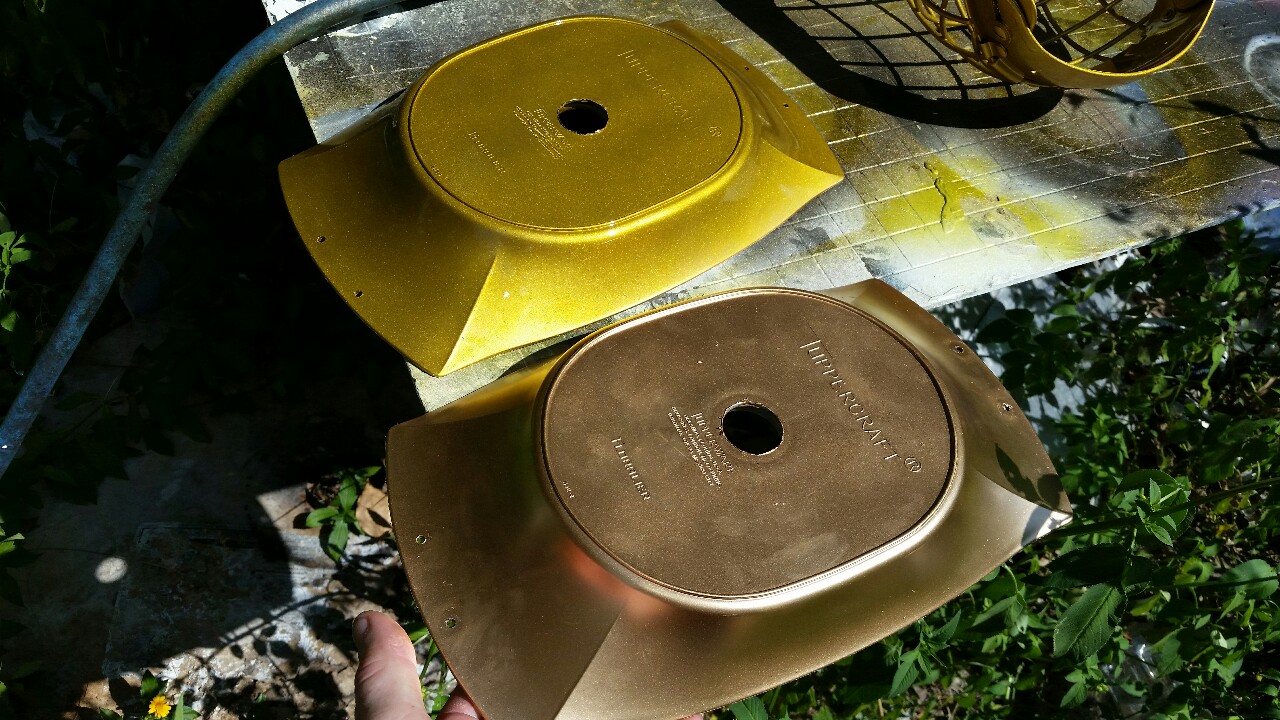 There's still a lot left to do like cutting down the pipe on the bottom, making the control rod, and touch-ups. Then I get to figure out the speaker and voice set up for Crow like I did for Tom. 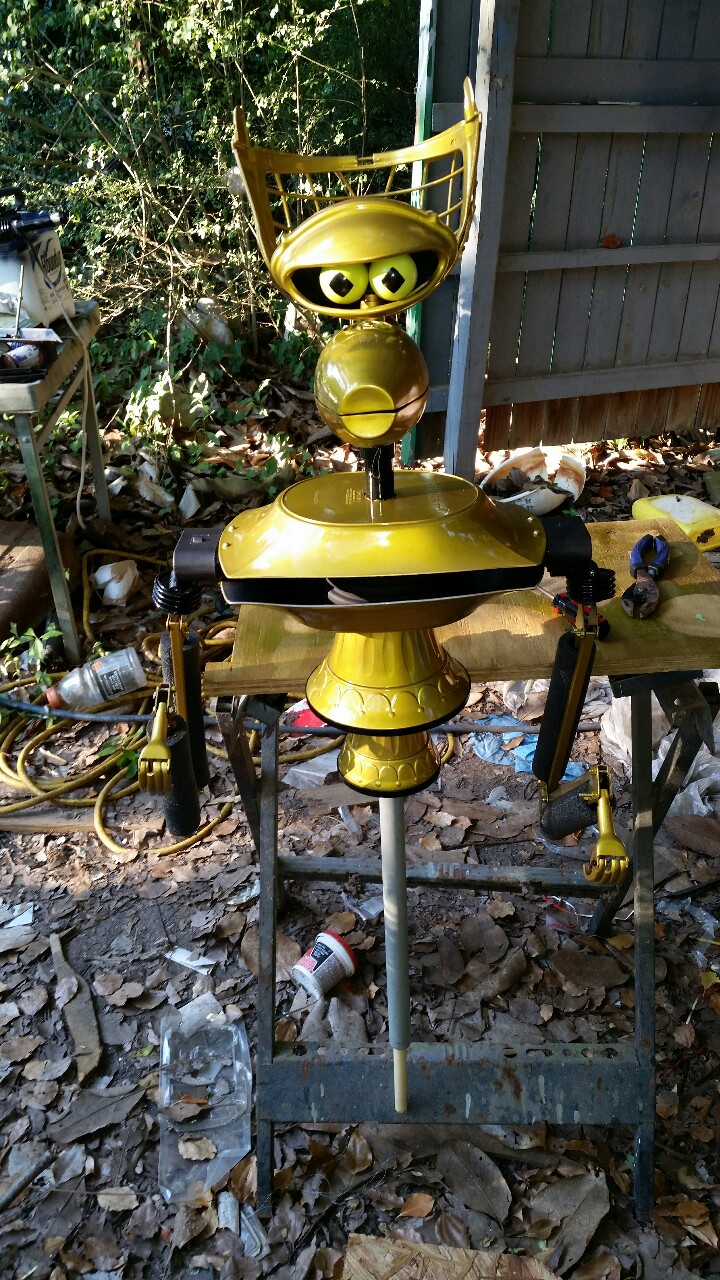 RPF PREMIUM MEMBER
Wow! He looks great all painted up! So glossy!

Thank you, I'm pleased at how nice the paintjob turned out.

Here's Crow in all his glory. He's finally complete. 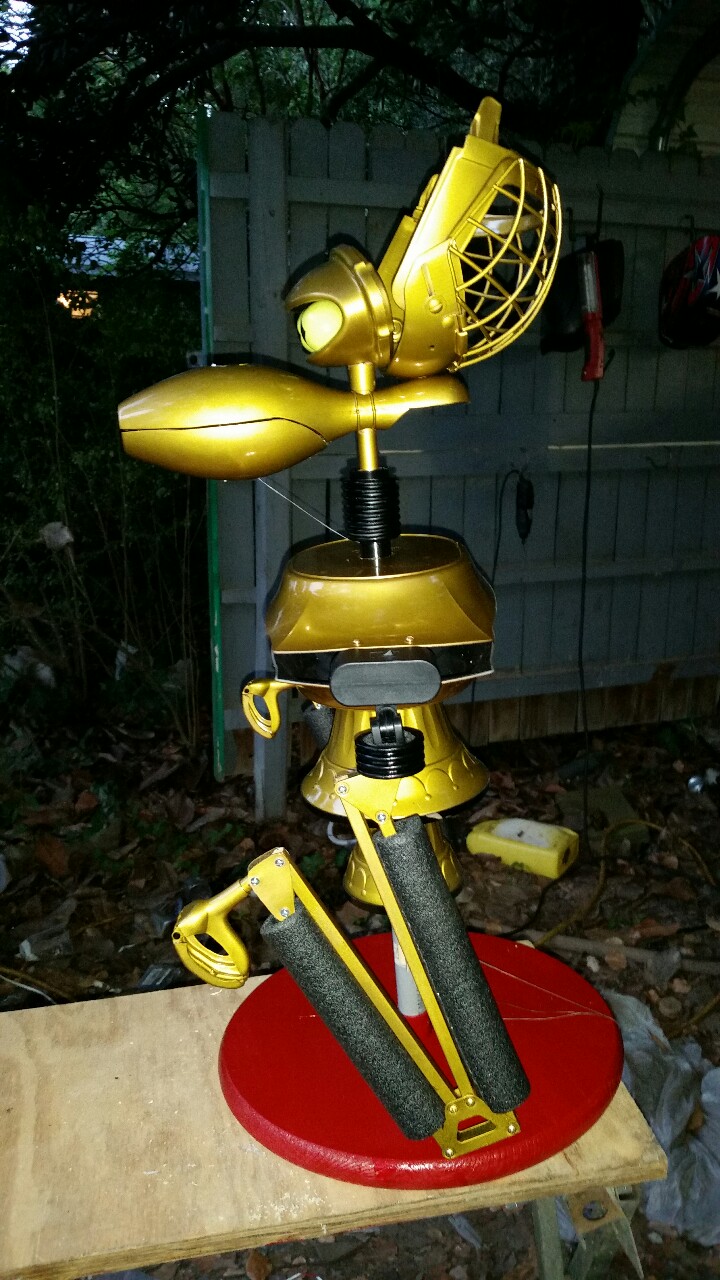 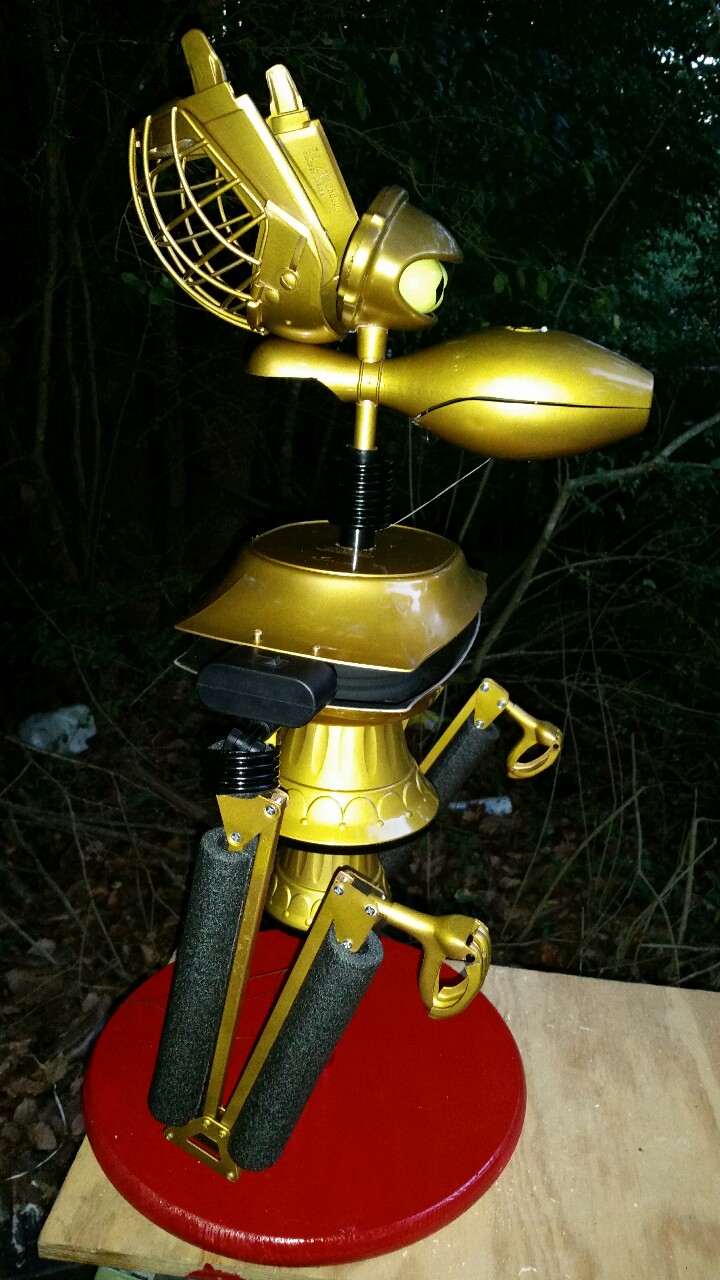 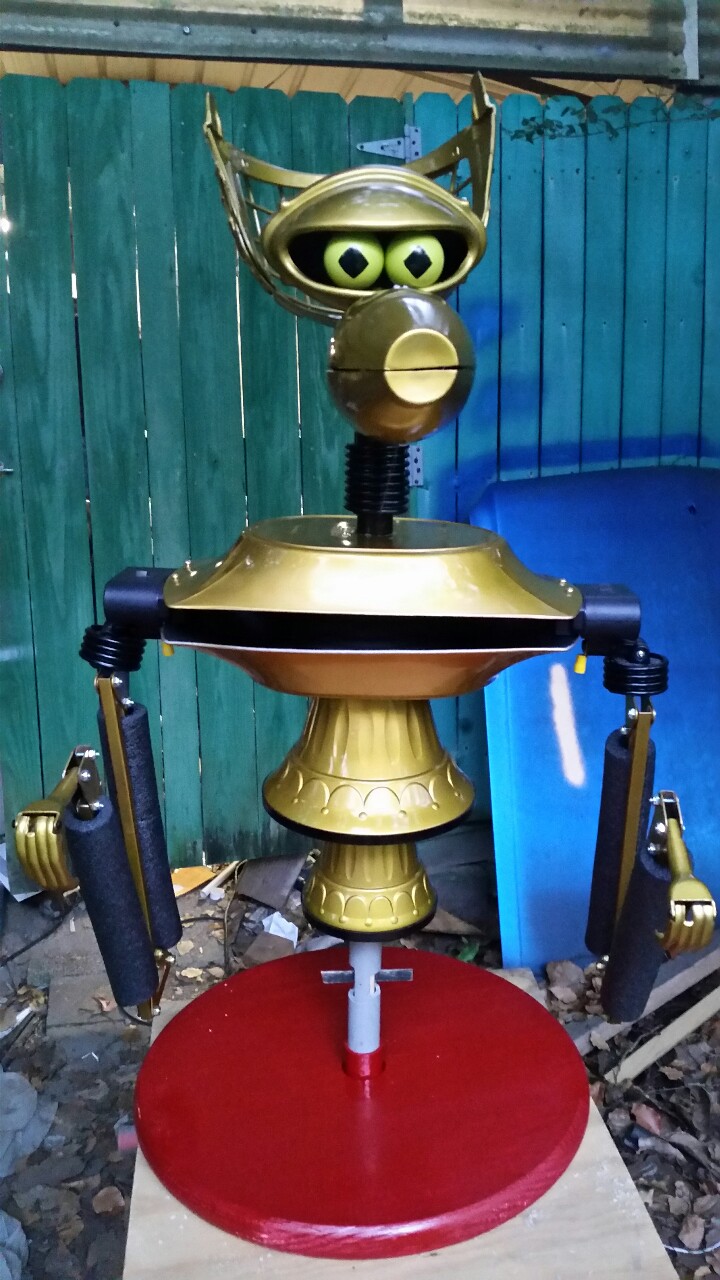 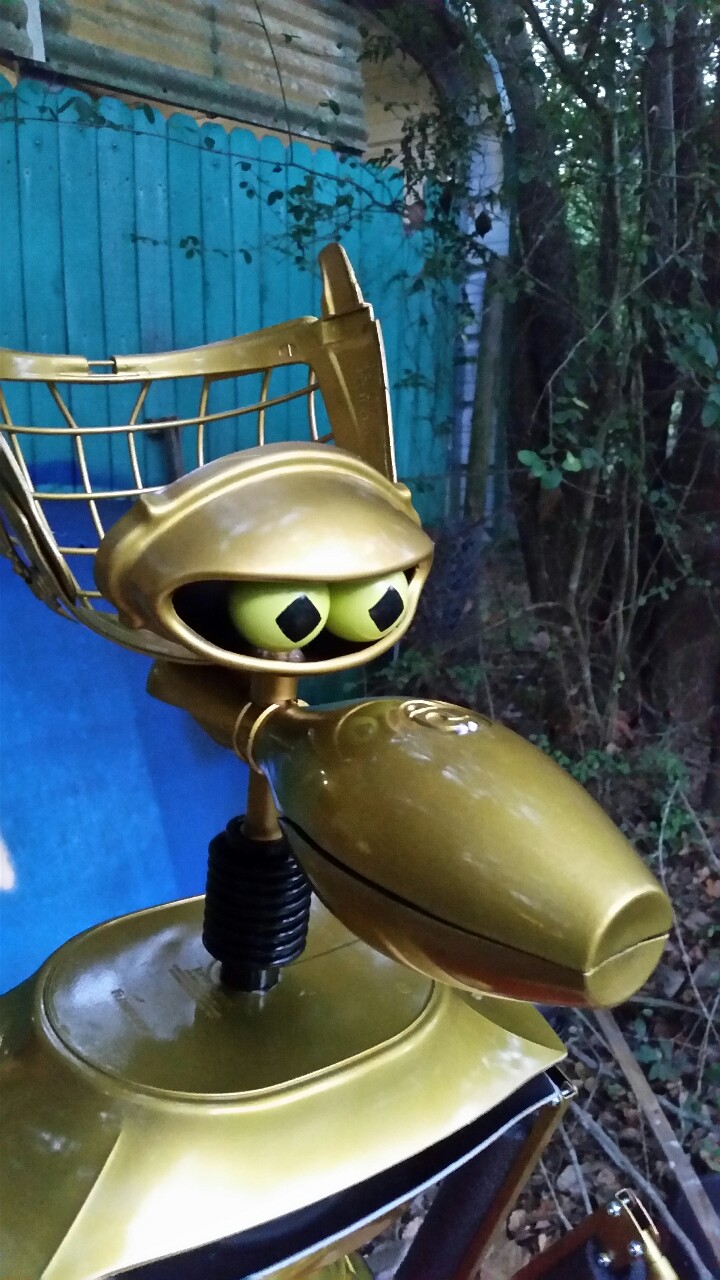 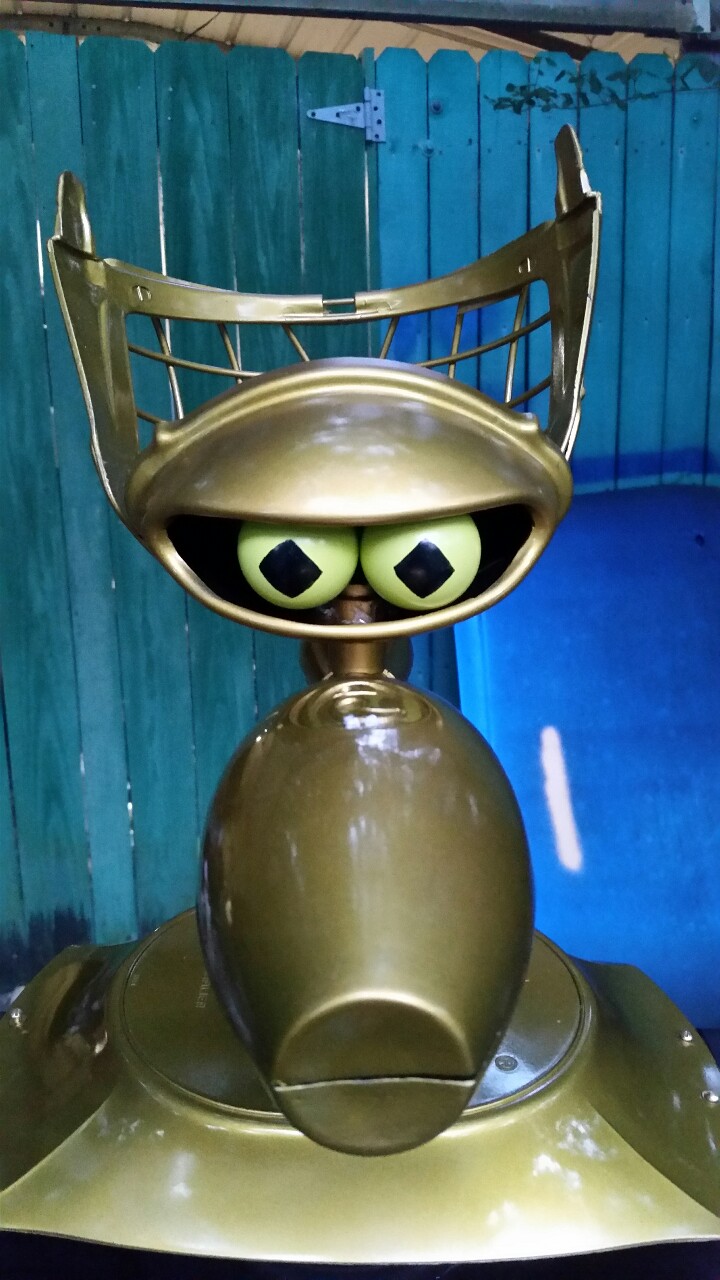 I had a once in an lifetime experience last night thanks to Tom, Crow, and my local PBS station. Earlier in the year they invited Tom and Crow to their MST3K launch party and the bots were a hit. They invited us back for a special Rifftraxs presentation with Trace Beaulieu and Frank Conniff. I was able to spend 15 minutes before the event started just chatting with Trace about the bots and some behind the scenes stuff on how they puppeted them on the Satellite of Love. It was a blast.

I'm holding Crow and my friend Mark, and fellow droid builder, has Tom. 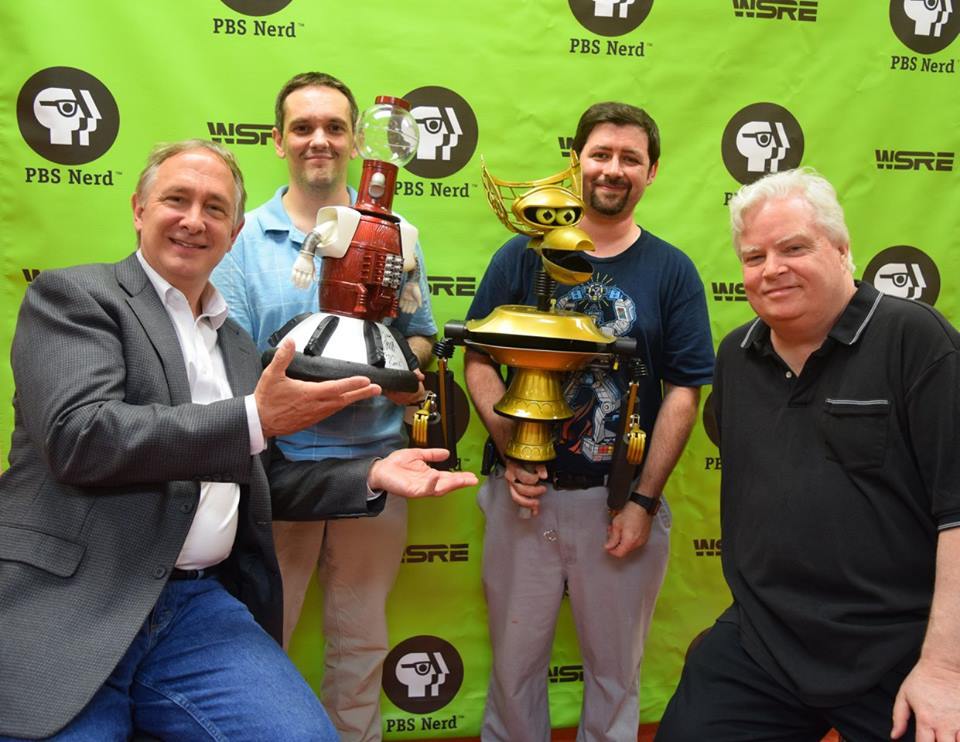