The show your custom BLASTER thread! 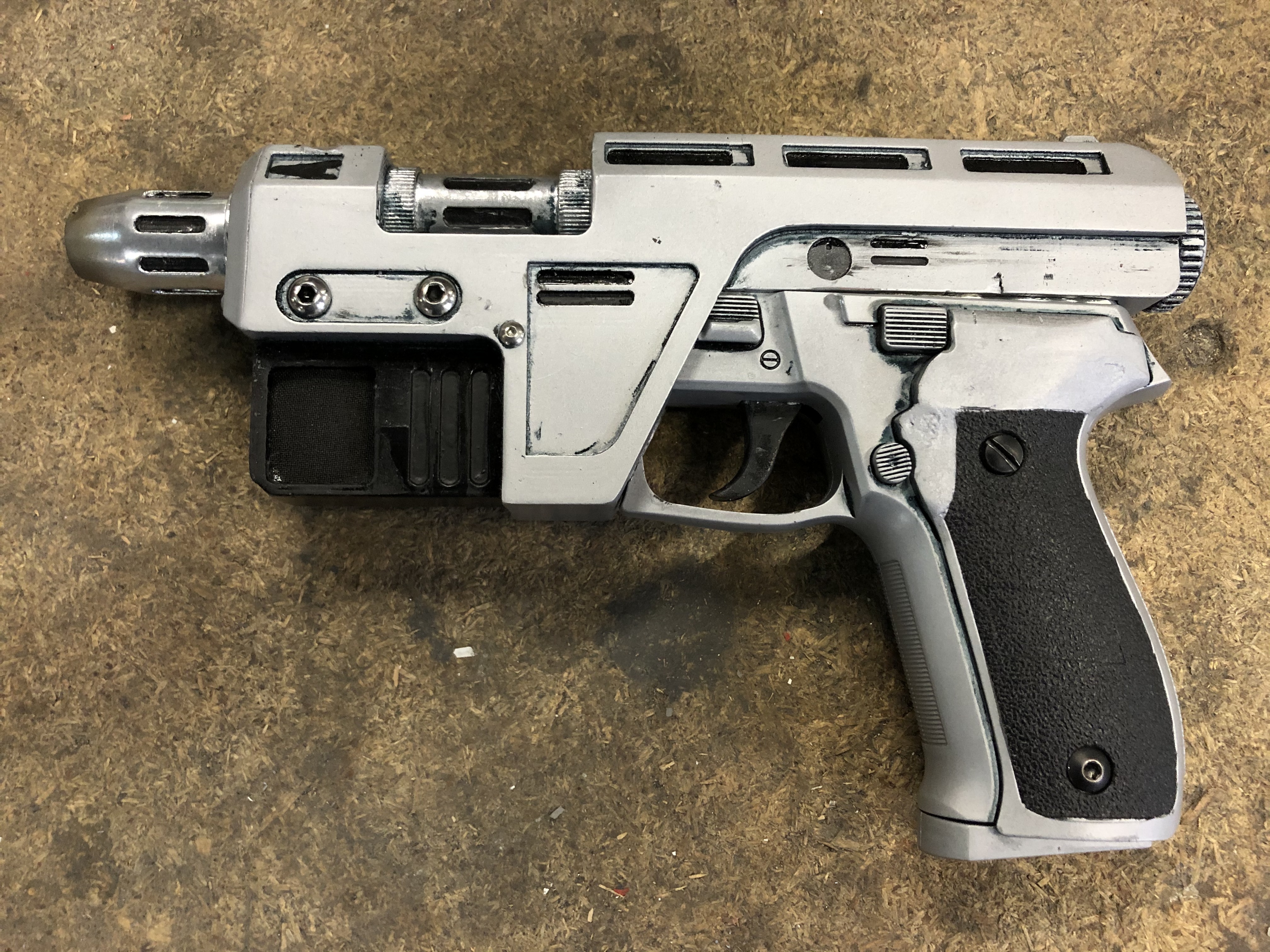 I’m not sure this is truly “custom”; however I believe it is a first. A “Poe Dameron” blaster.

It is a hybrid design with an Airsoft Sig Sauer 226 lower and a printed upper. (Still more detailing to be done)

Hello again all. I am beginning a new conversion for my personal airsoft rifle into a blaster rifle. It needs to remain functional so the modifications need to remain cosmetic. Barrel, Shroud, Scope, Flash hider, Etc. Looking for inspiration so was wondering if anyone had seen any old photos or had any advice that could possibly help me acquire a direction to start heading. As it is a M16A1 I know the A280 Rifle is based off this platform but was wanting to give it a different look. Any thoughts? 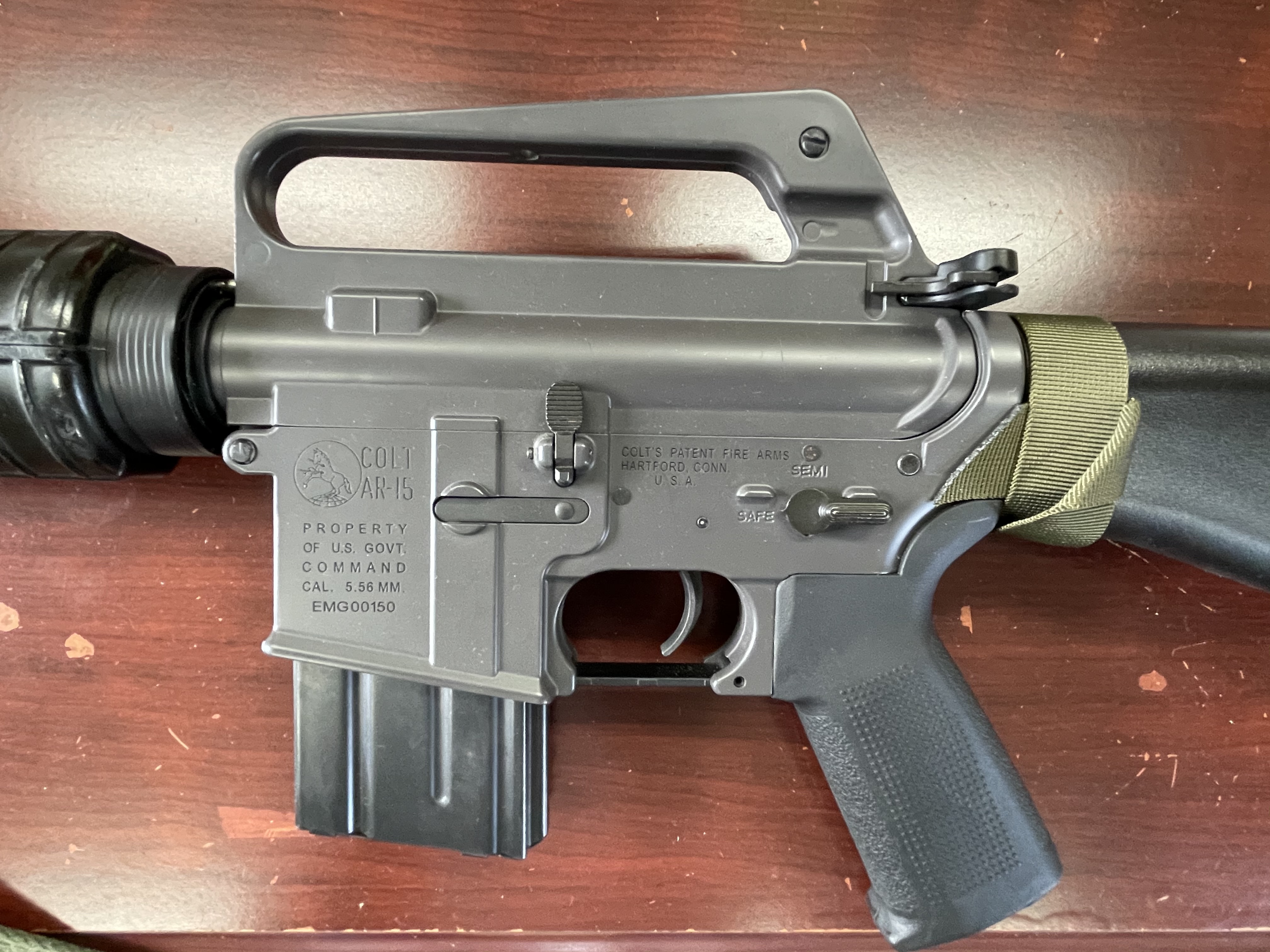 Thought about starting with this magazine: 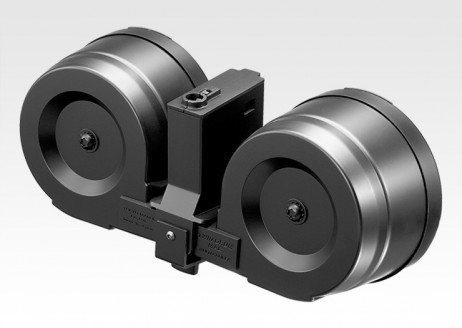 Silversailer said:
Hello again all. I am beginning a new conversion for my personal airsoft rifle into a blaster rifle. It needs to remain functional so the modifications need to remain cosmetic. Barrel, Shroud, Scope, Flash hider, Etc. Looking for inspiration so was wondering if anyone had seen any old photos or had any advice that could possibly help me acquire a direction to start heading. As it is a M16A1 I know the A280 Rifle is based off this platform but was wanting to give it a different look. Any thoughts?...
Click to expand...

For starters, the guns in know of in star wars that are based off of the AR platform are a number of the rebel rifles from scarif in rogue one, so check there for inspiration. for trooping type stuff, I'd stick to a small or no magazine, unless you want to make this thing look like a support weapon (like Cara Dune's big rifle in season 2 of mandalorian) rather than a rifle. Most star wars guns have very minimal magazines, or don't look like they have any magazine. That said, when you take it onto the airsoft field itself, go nuts .

some nifty things for that style AR that most folks have never seen, is the cantilever mount for adding modern optics to the carry handle.

it puts the optics co-witnessed with the existing iron sights, and preserves the carry handle. This kind of idea could be used to add on various scopes and other "optical" or range finder dodads out front, the way bowcasters have; or as a mounting basis for DD-44 style "offset" optics and whatnot.

A300? I’m working on one and would have liked to have used an Airsoft as a base. 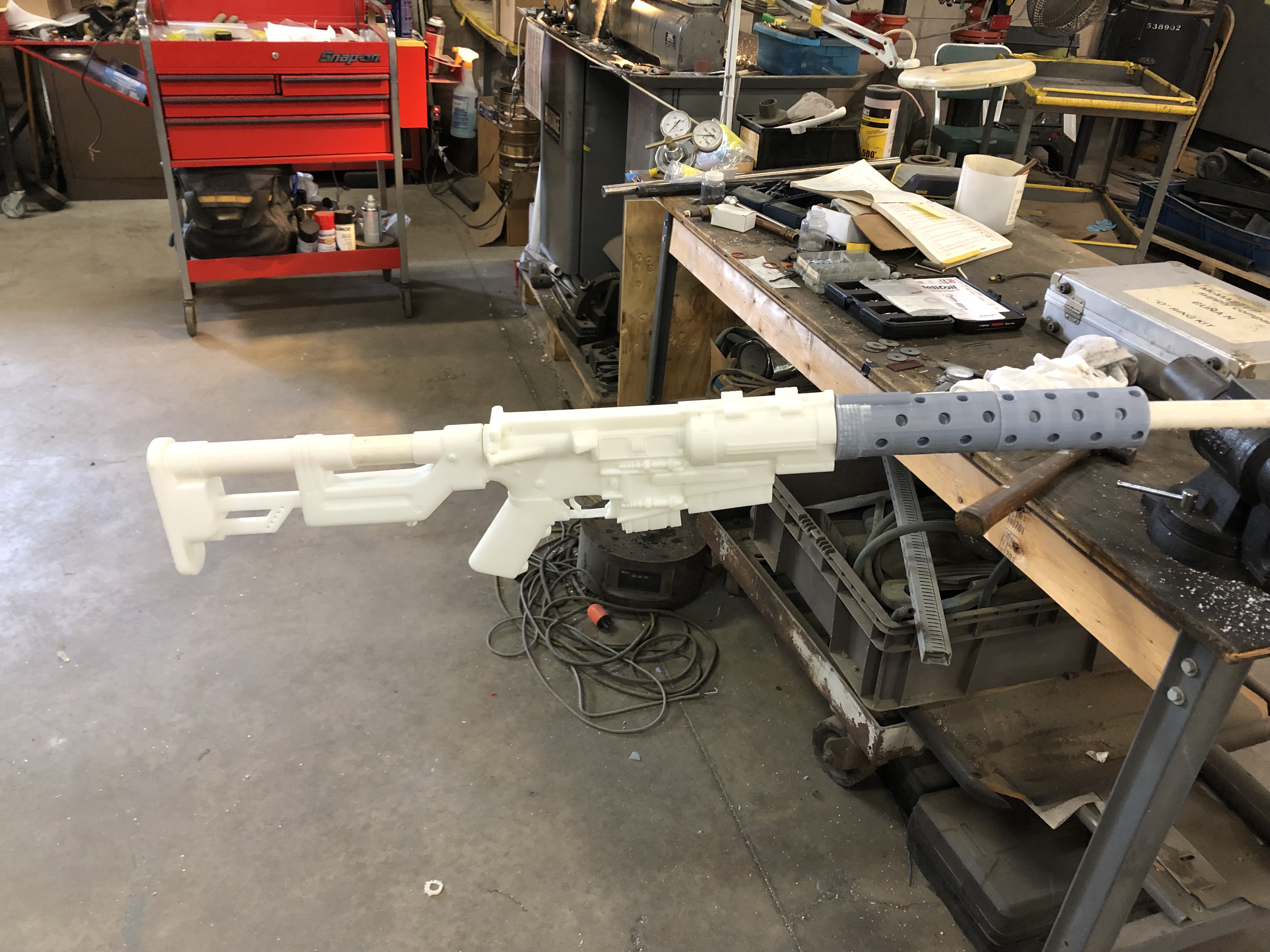 yea, that kind of looking one. they're meant to be reminiscent of the old hoth rebel blaster rifles (or at least that's exactly what they look like to me), but since the originals were stg 44 casts or replicas underneath, I assume it was just easier for them to build out AR's to look the same way for rogue one.

Endor trooper rifles were also based on the M4/M16

A follow up on my earlier post, thinking something along these lines. A bit of E-11 styling mixed with a few other greeblies and a MG-42 Flash Hider. Also using the twin drum mag from above to make it something of a lightweight support weapon: 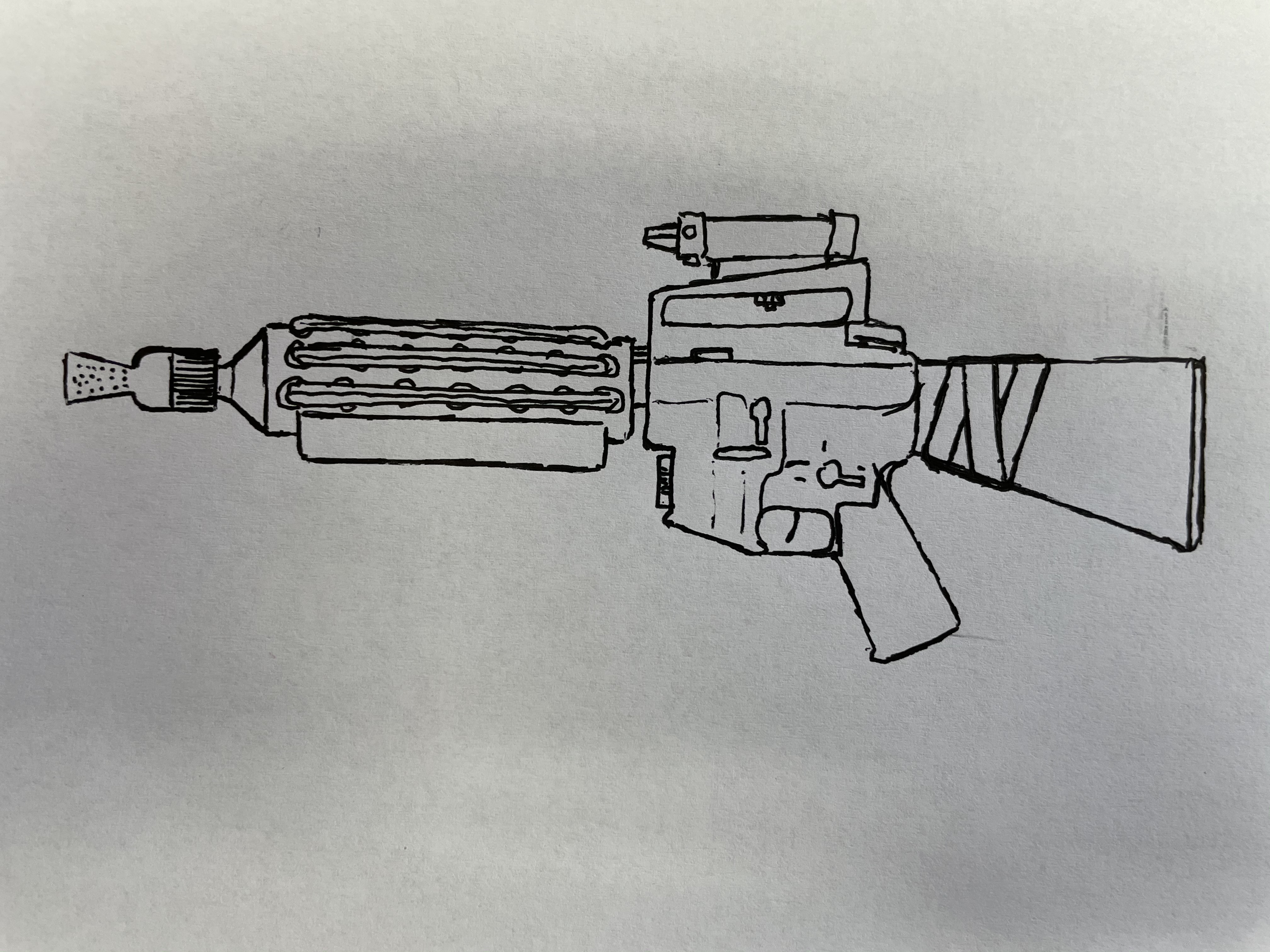 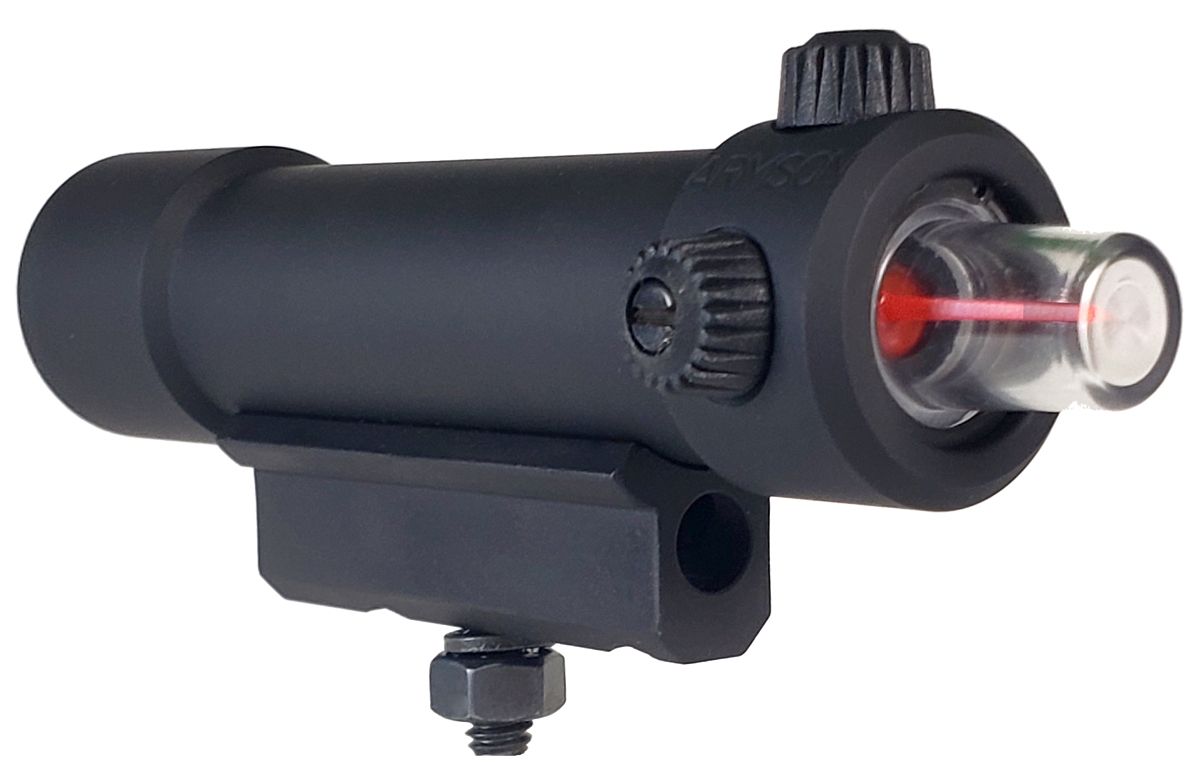 an integrated bi-pod/hand grip would look cool on that kind of set up also, really lean into the support weapon idea. like the negev

there are other lmgs where the bi-pods made front grips while folded back, i just can't remember. I think some of the german WW2 ones were kind of like that.

Well it's only been 7 months and finally took this off the shelf and had a proper look at it, covid lock-down means I have no excuse not to. When I purchased this AW GBB airsoft replica it had been messed with. The retaining screw behind the scope mount and hop adjusting screw cover were missing. Wondered why the scope was wobbly. Mechanism works fine but not keen to try it out as it's intended as a click trigger display piece in any case. This is my first DL-44 and likely will be it for a while so wanted to do it justice.

Found these prop replica images from Crucible Custom Props, beautiful work and so good have decided I want to do my own take with this less than 100% accurate but cool prop weapon. ANHesque with the 3D printed parts from Shapeways designed by Sly Tools developed in collaboration with the late Robiwon who I never had dealings with, but who as I have come to understand was a hugely talented and active contributor to the hobby in general including his impressive fully lit scale models. Always generous with others and greatly missed. He lives on in these forums and continues to inspire newbies like myself. I have ordered his fine ANH grill and also the Sly Tools Barrel Sight. Have already removed the SOLO wheel making way for the mystery disk. Might nut out a few other cosmetic improvements but it will be bla bla ...as close as I can make it. Previous owners had a go at detailing with sandpaper with not much success, so decided to fully sand back certain areas clean so I have a blank canvas. Looking forward to attempting those chips, scrapes and lovely grime. 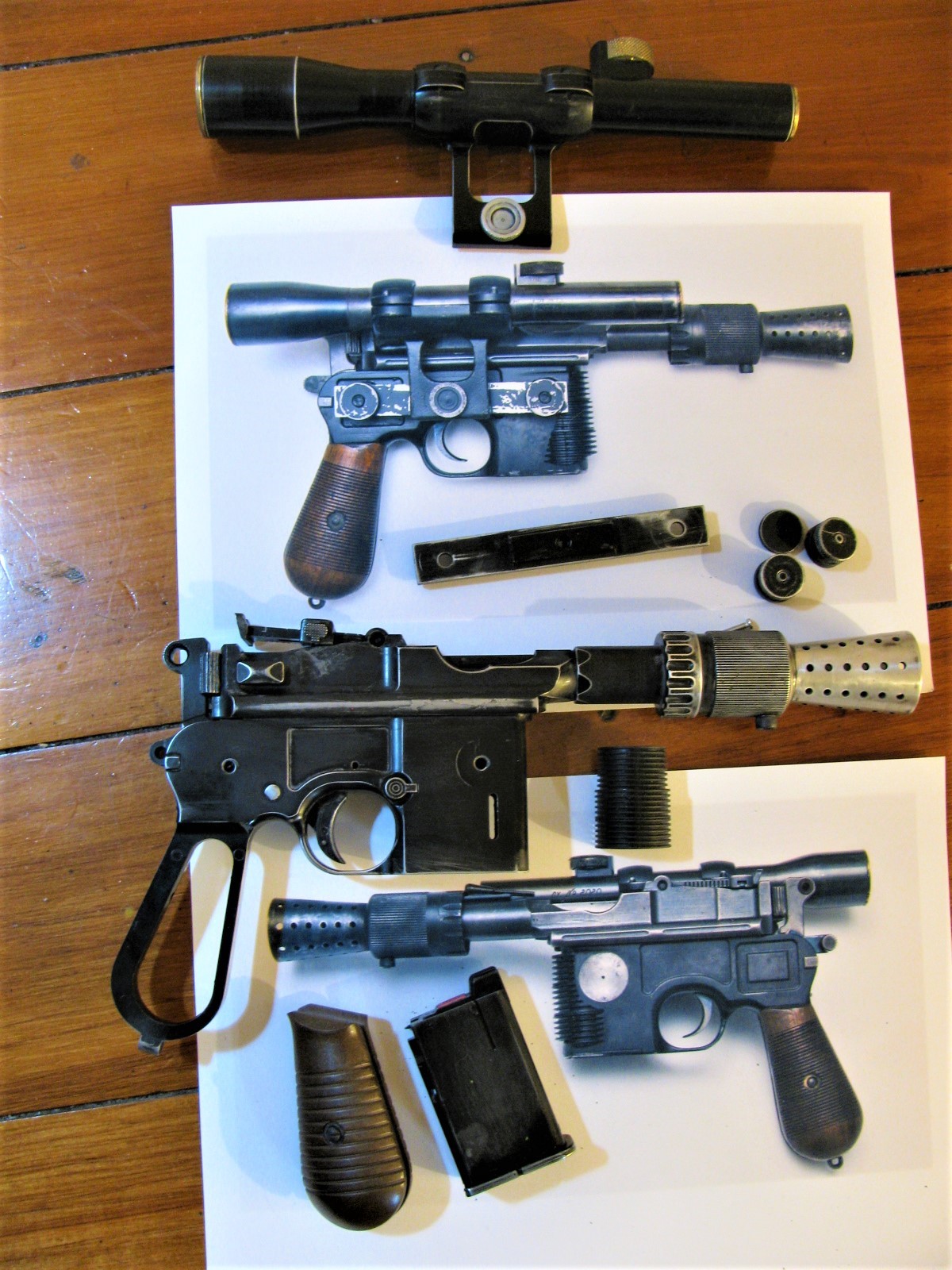 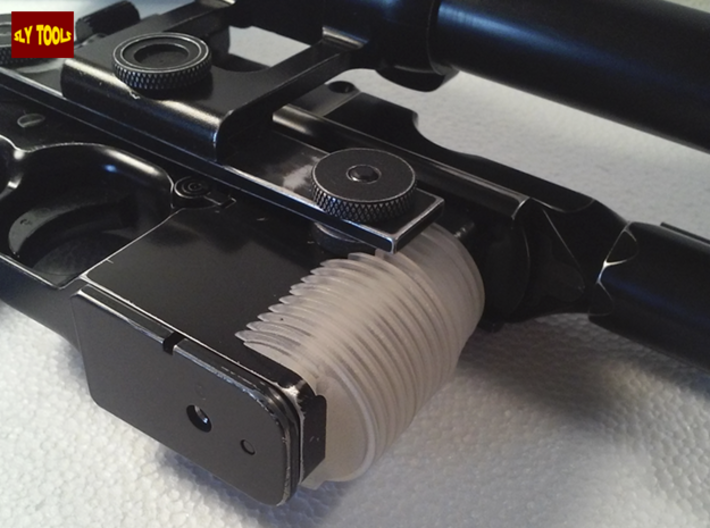 This is a Blaster design I've been working on, it's based on an old pistol called the Bergmann-Bayard 1910/21, from the same company that produced the Gun The Mandalorian's Blaster is based off, I've taken the designs of actual greeblies used on Blasters in the Franchise and added them to the design for authentic detail, I've also added a barrel based off the DH-17 Blaster from the Original Trilogy, an in universe feature is the barrel can launch the small Dart Rockets seen below, Lastly I shortened the grip because I thought it looked too long. 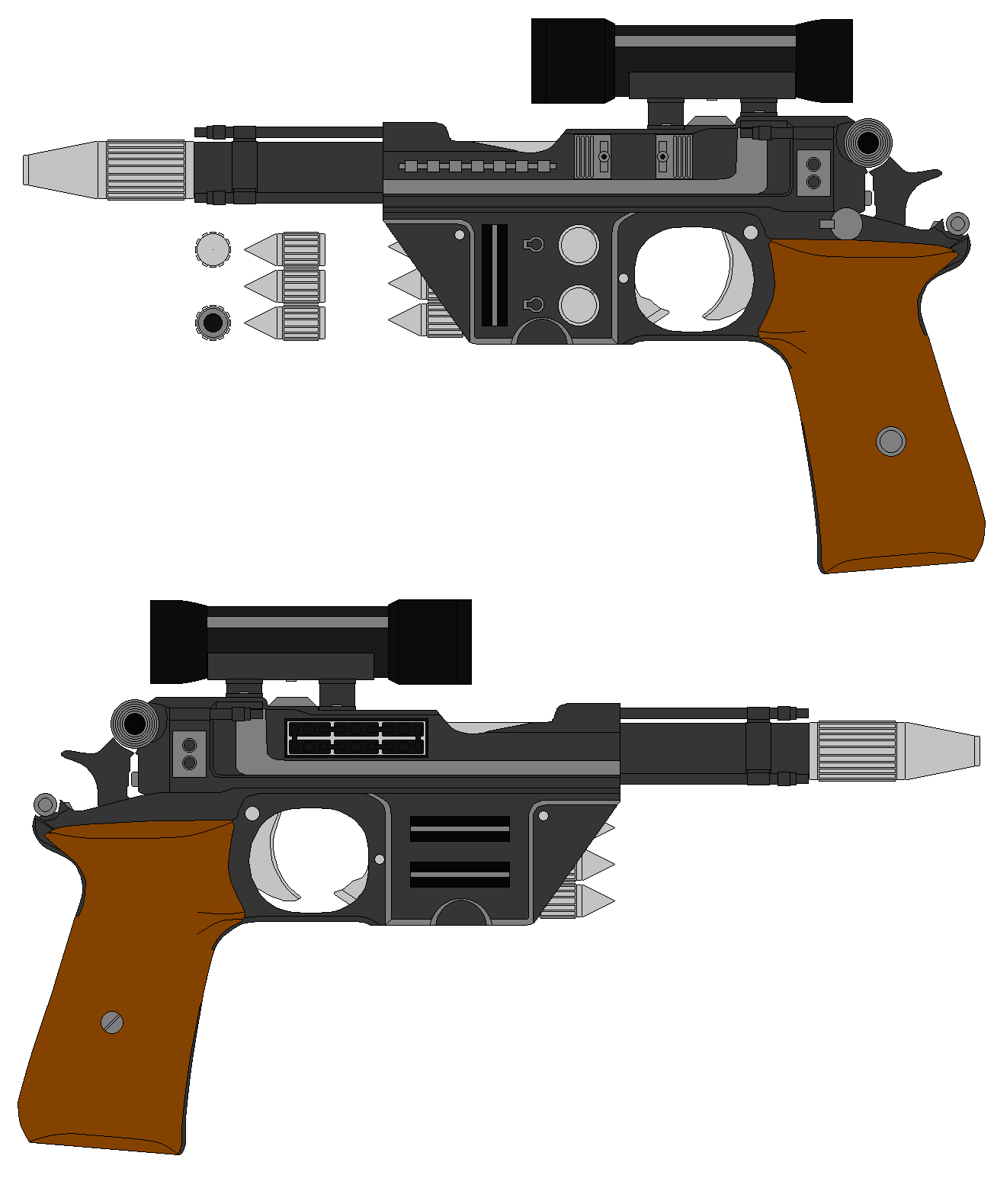 Jhowe1997 said:
“BlasTech A-120 Blaster Pistol” - I’ve finally gotten around to building my own blaster! Inspired by the side arms seen in the Razor Crest in episode 1 of The Mandalorian, using a Denix replica Luger P-08, the same style of pistol which was used in Rogue One for Jyn Erso’s blaster. I dived into my big box of greeblies, fishing out all kinds of parts that would suit a blaster. Initially I wanted to go for something with more of a longer barrel to resemble those of Din and Jyn’s blasters, but ended up going for more of a stubbier barrel, built up of a Quarz 5 camera focus ring, t-track strips, and the internals of a vintage Canon flash battery case. The end of the barrel is built up of the internals of a vintage camera flash bulb socket and round heat sink, which I’ve painted to resemble a heat scorching. Other parts across the blaster include metal plates and screws from vintage cameras. The grips were sanded and painted, before lightly weathered. I just kept adding and taking away parts until I was happy with the end result. Also made a custom aluminium stand for it to sit on in my collection.

There’s a tone of really awesome builds and ideas in this thread! Love it!
Click to expand...

Love it! A great blaster I think. Very good job of design, construction and paint

RPF PREMIUM MEMBER
This is my custom A280. The "Reciever" part is slighty different than the actual A280 so i call it the A280V (V for Variant)

That looks great, like a hybrid between the ESB and ROTJ versions of the Rebel rifle.

emeluis said:
Love it! A great blaster I think. Very good job of design, construction and paint
Click to expand...

Thank you so much! Really appreciate the kind words. It was a super fun build! Not too much of an idea going into it, but once I started putting parts with other parts it all came together nicely!

Did you Disneybound Star Wars Style for Galaxy's Edge? If so, post your pictures.
21 22 23