Thank you to everyone for the kind and encouraging words.
So, one last check on lighting today before the box gets glued up/ fixed and the rest of the etch gets attached. Still a few days of finishing up the detailing on a new master pattern for the top. 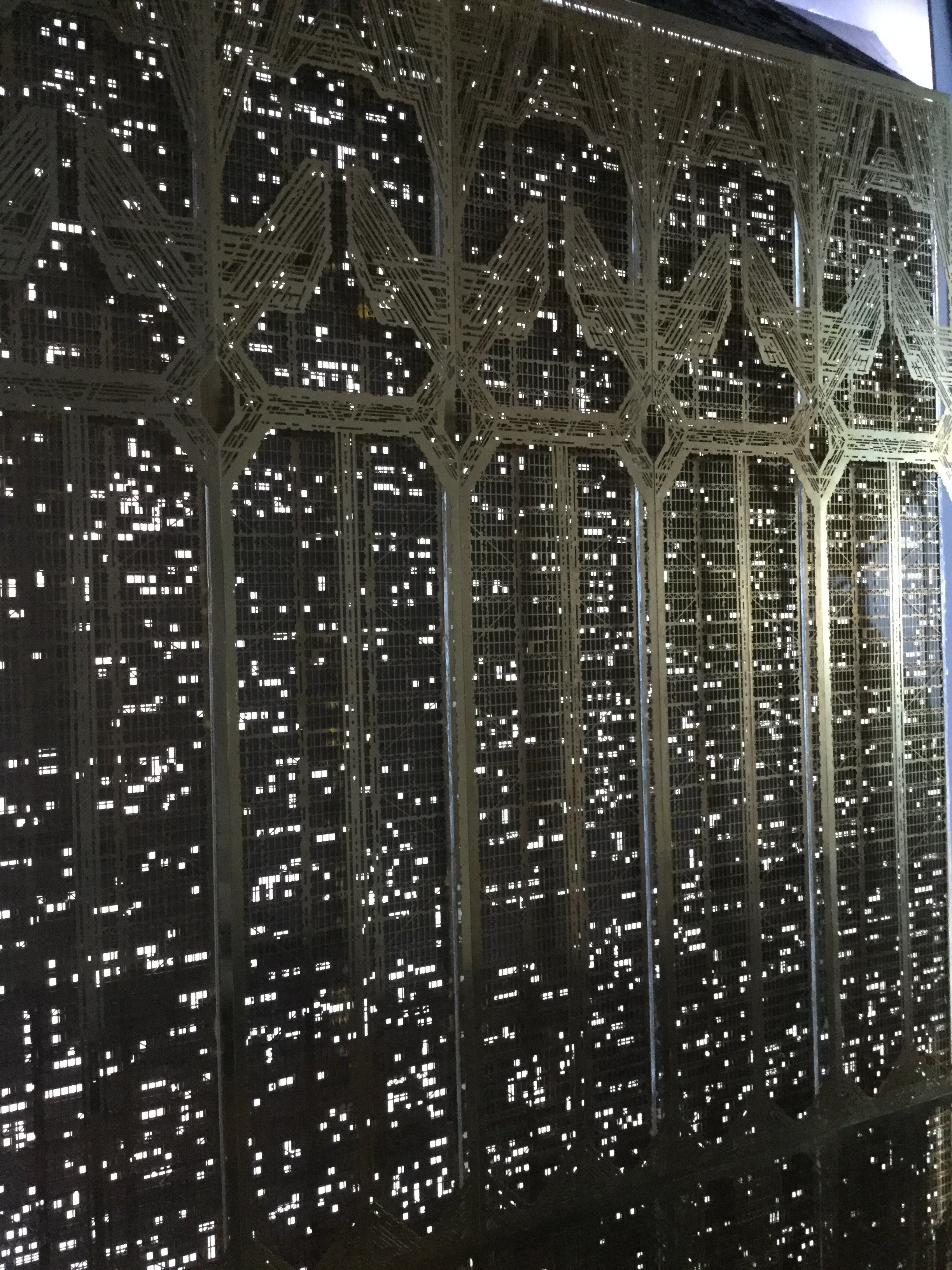 Brings tears to my eyes; finally, someone crazy enough to go all in
S

joberg said:
Brings tears to my eyes; finally, someone crazy enough to go all in
Click to expand...

I enlarged Pyramidrep’s latest photo and took a large “Gummy.”

mktodd said:
its really coming along
those etched plates look like they came form the shop at EEG..

Fabulous work sir, I am in awe of your commitment and skill.

Rather than waiting another week while I finish off the master pattern for the roof, I thought I’d give you a look at where I am this morning. This buttress has been fighting me all the way since last summer when I damaged the acrylic box on a tiled floor and had to start again. Rather than go back to have the acrylic cnc’d again straight away, I cut the patterns myself on a table saw and it was easier to do any adjustments/ additions as necessary. (It’s nasty stuff to cut)
This is not how the light box was originally built but my solution to deal with it.

On the table you can see a complete set of drawings for the lighting patterns. 7500 window lights in the left buttress and 6800 in the right.
This is a prototype for the final buttress‘. Final drawings are going out to a company to have the acrylic cnc‘d since I now have the design completed and I know it works. So the etch you see here will be removed and used on a new substructure.
Fibre optics to be added to the top and some pulsing lights to the perimeter edges of the roof later.
I hope to begin casting in 2 or 3 month when weather/temperatures are warmer.

Still a little bit of etch to add to the side, waiting on superglue from Spain and some last model parts for the pattern from the UK.

Note. The buttress lighting looks much, much better at night that what’s indicated in the images( taken at 11.00 am).
G 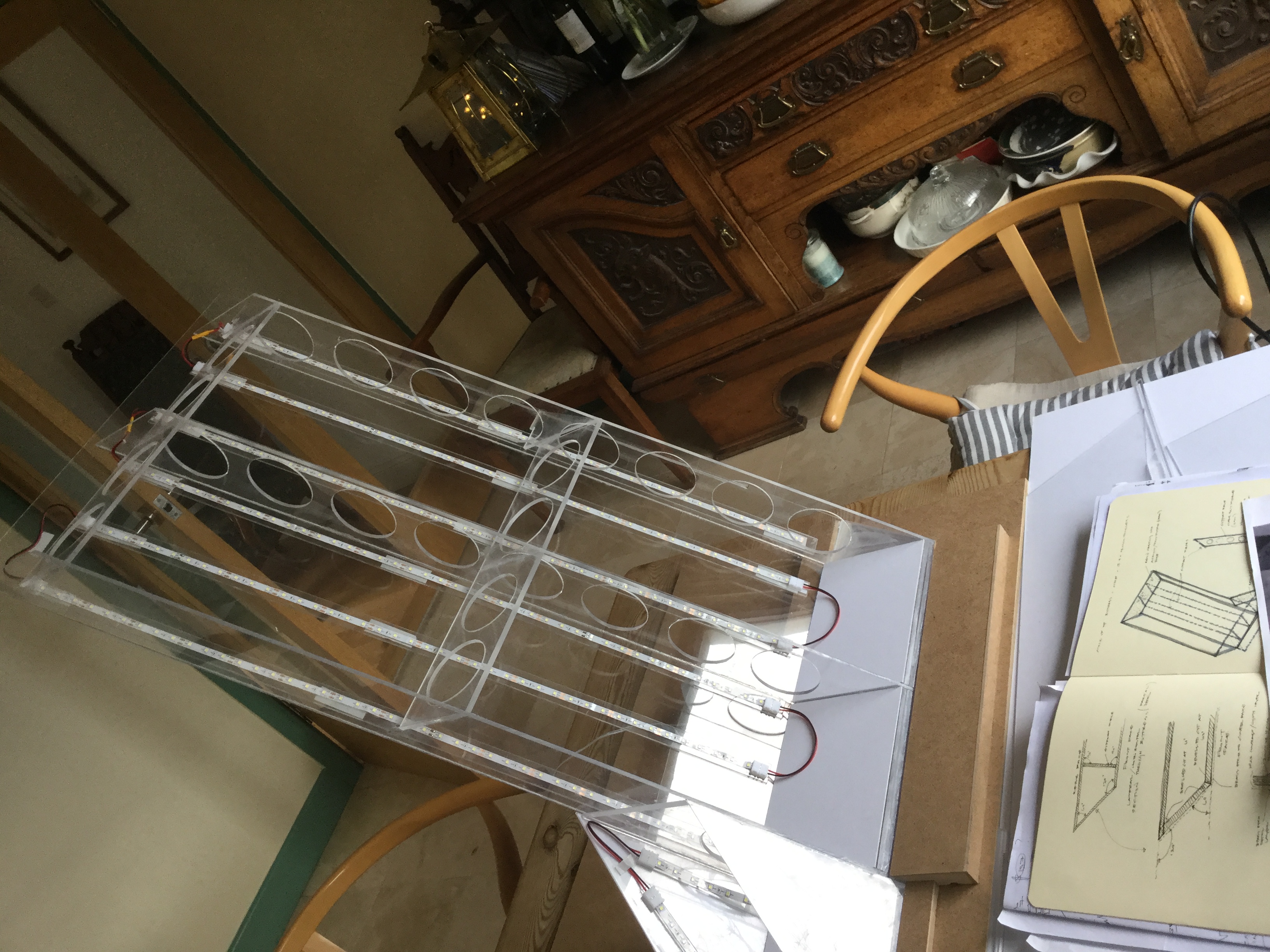 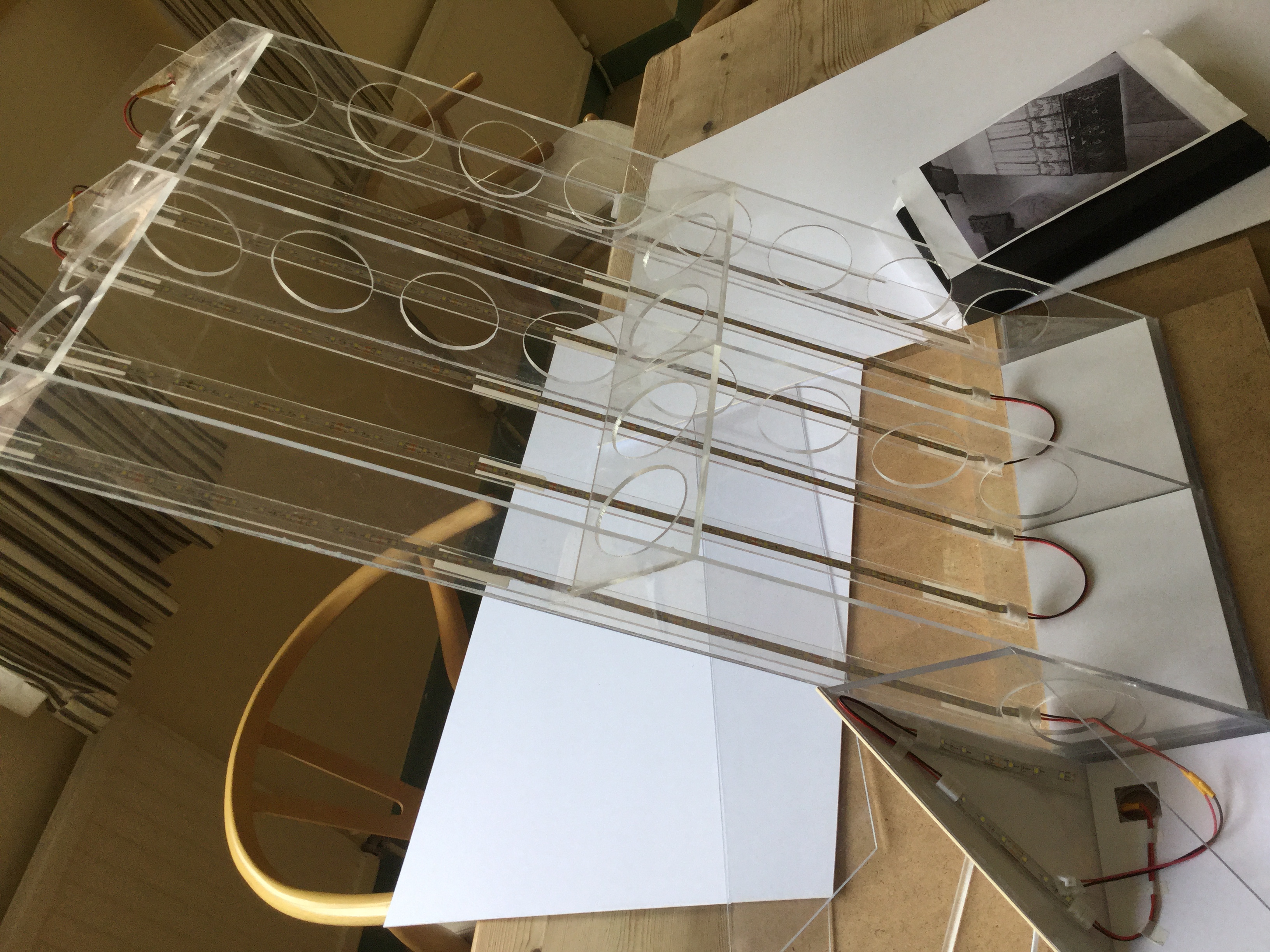 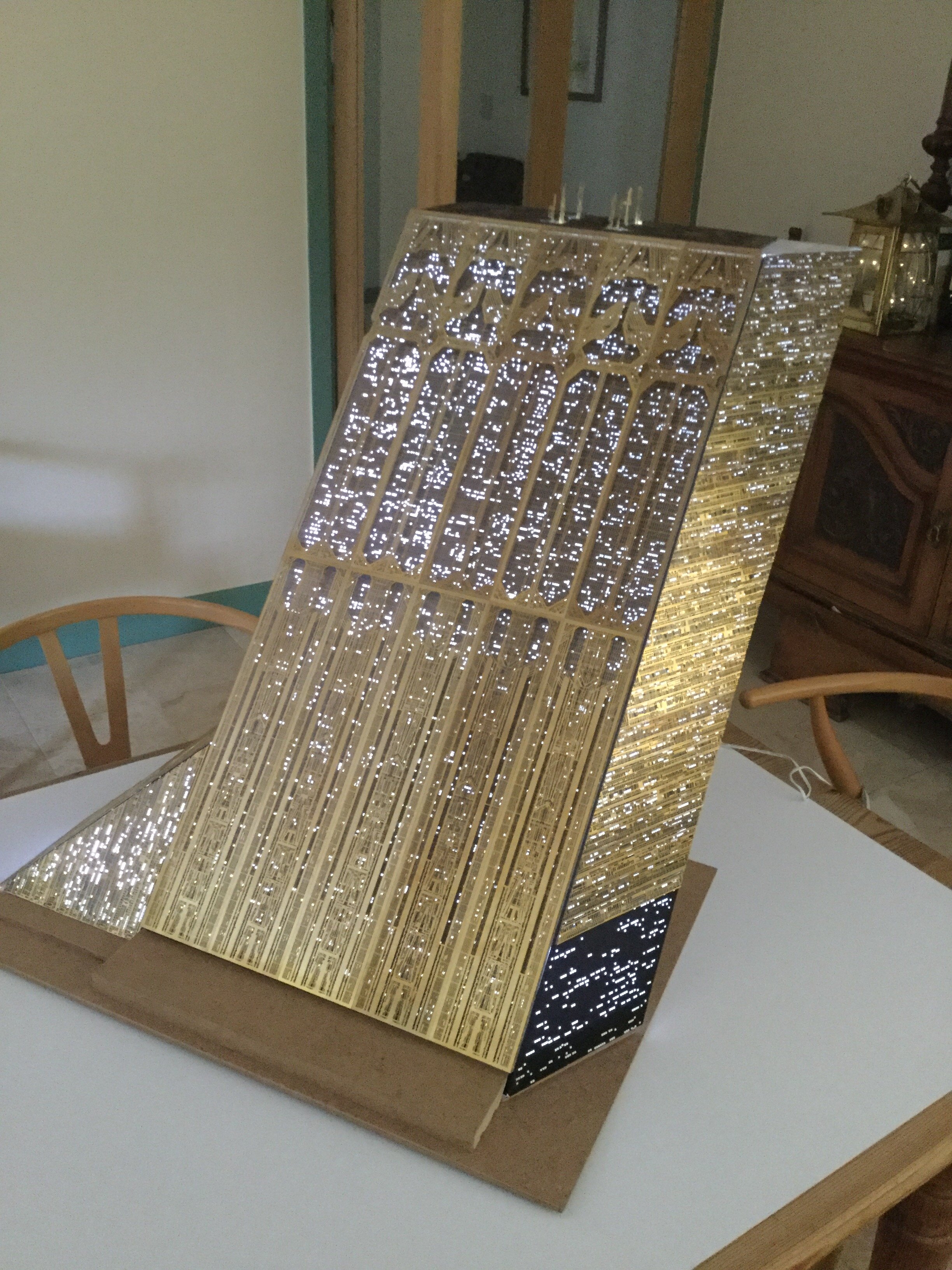 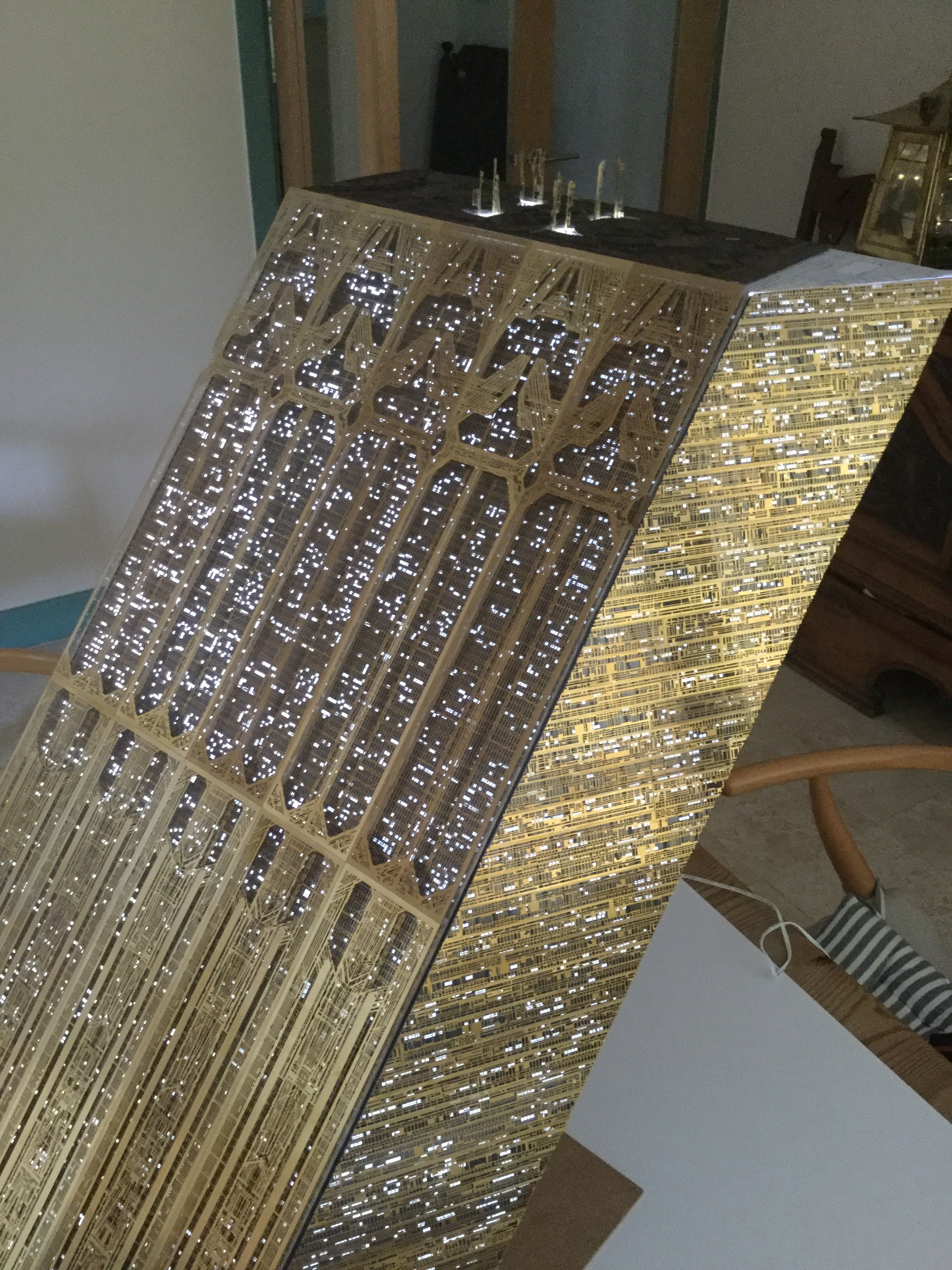 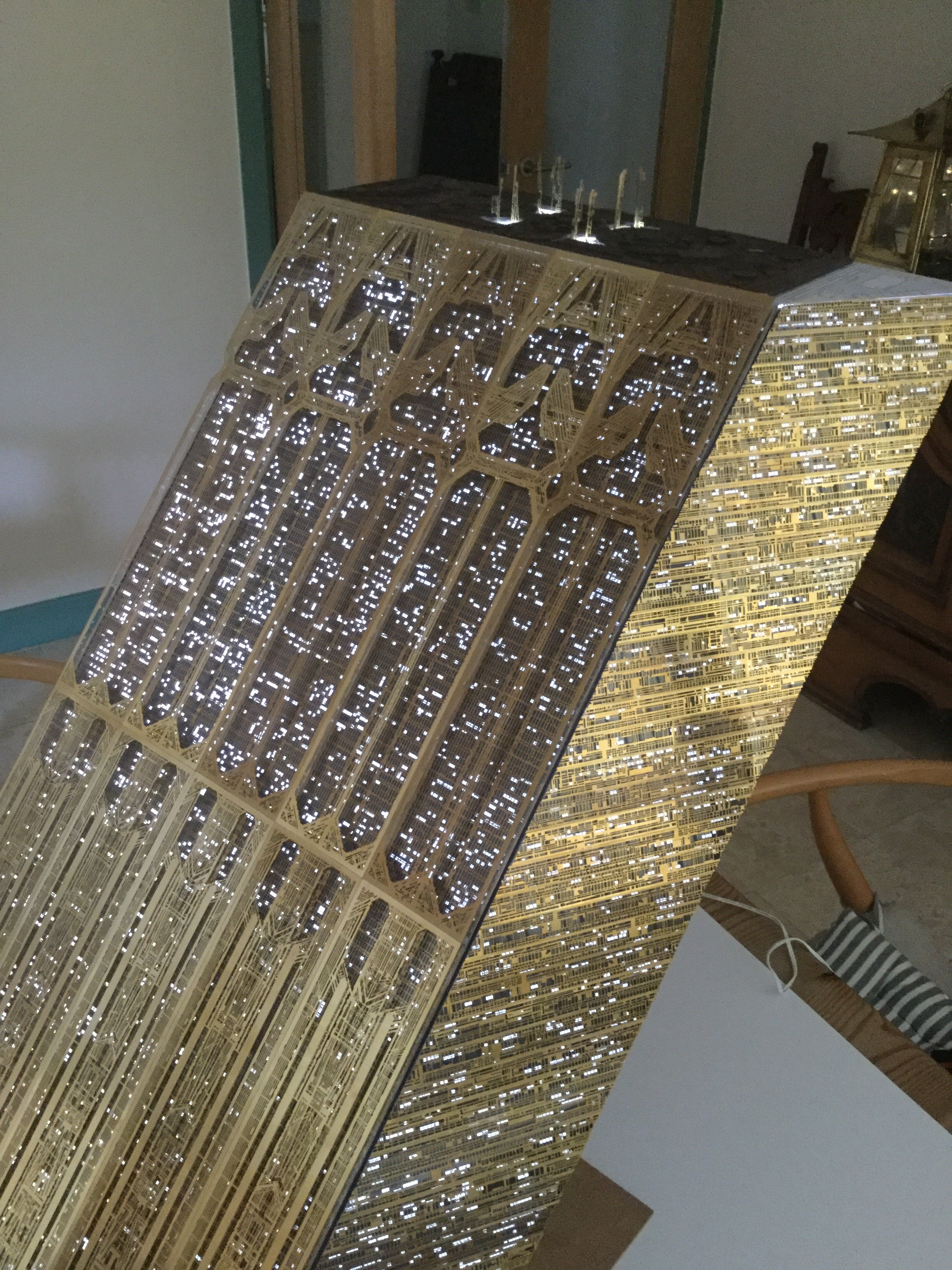 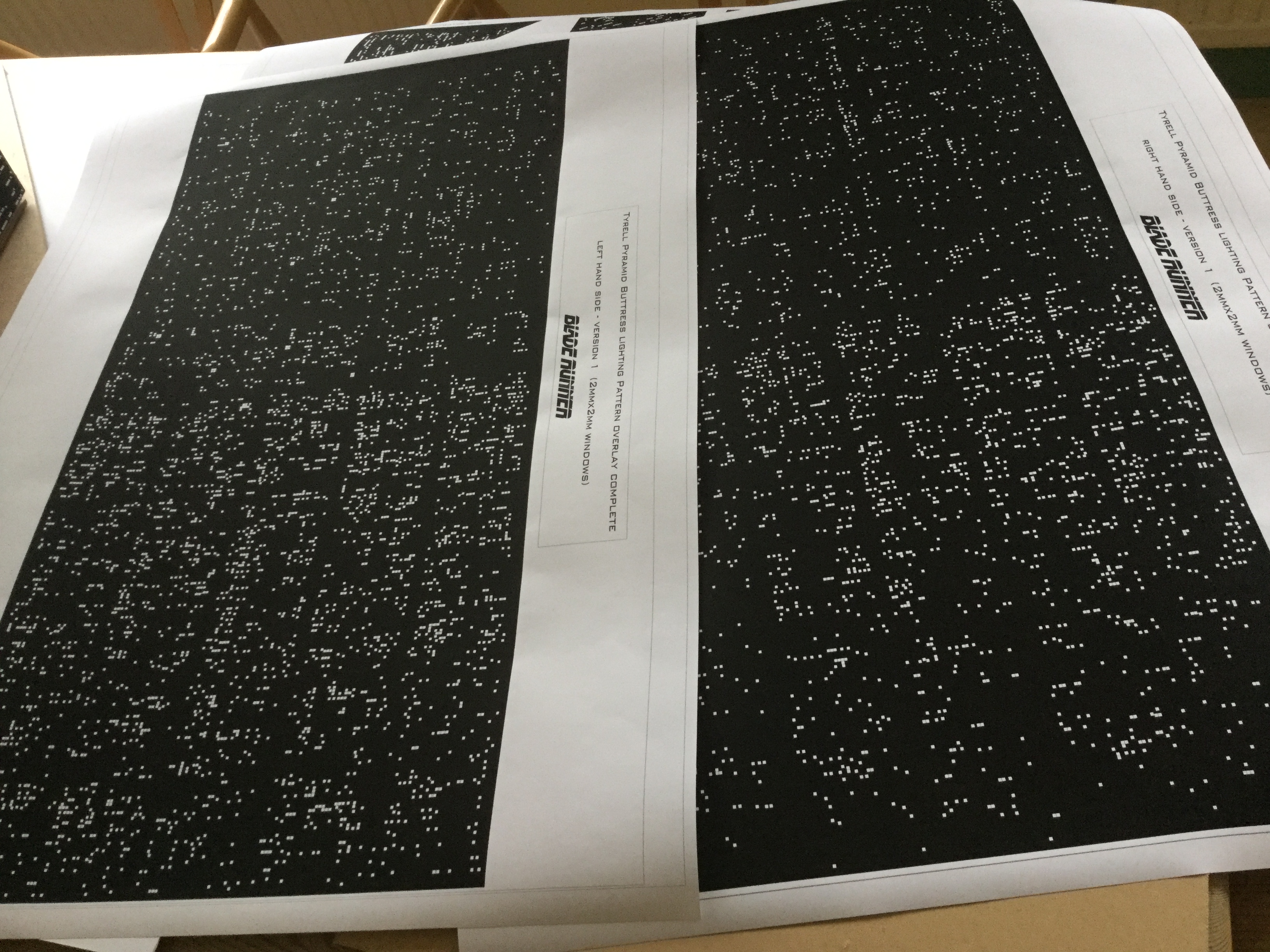 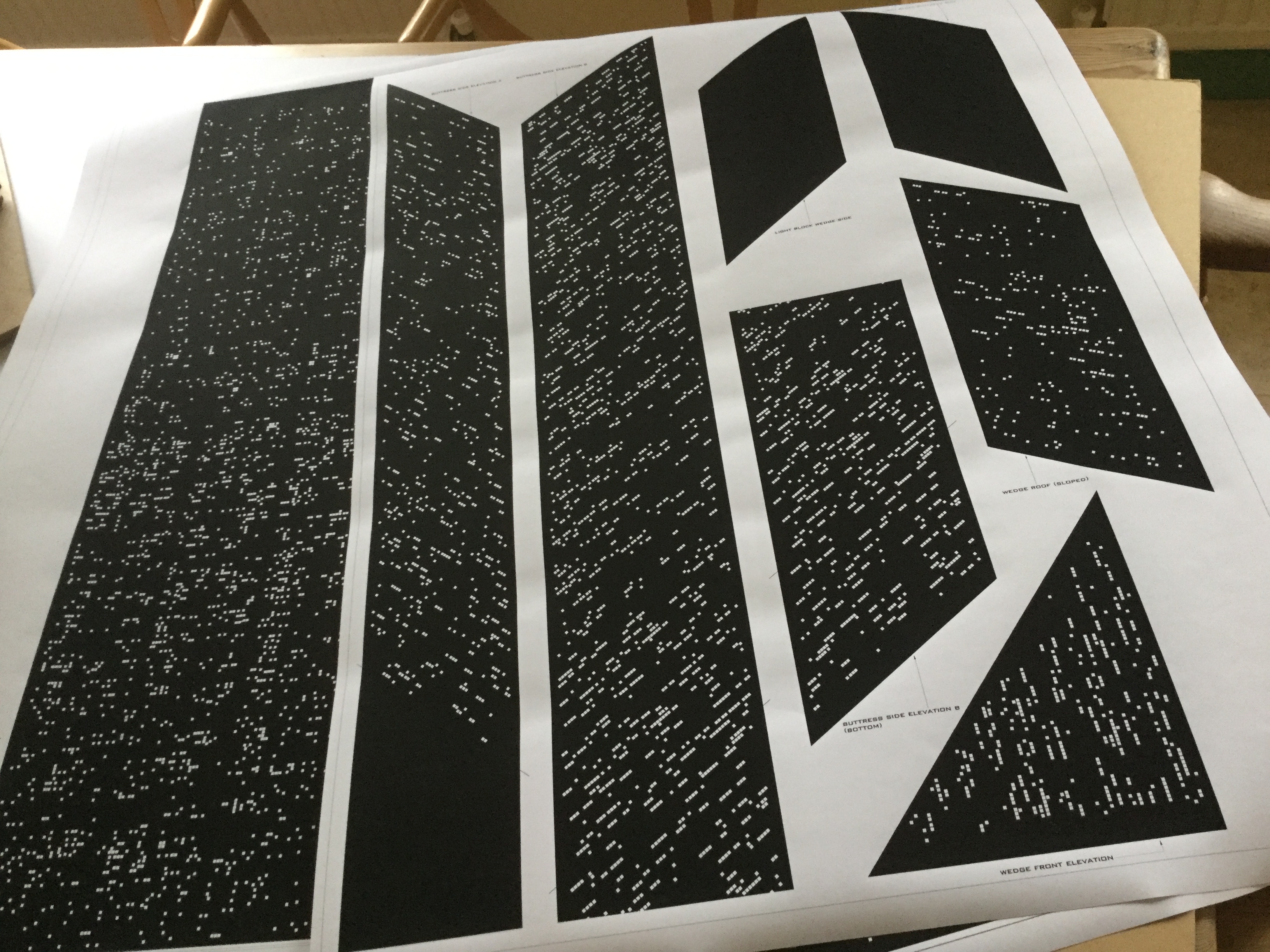 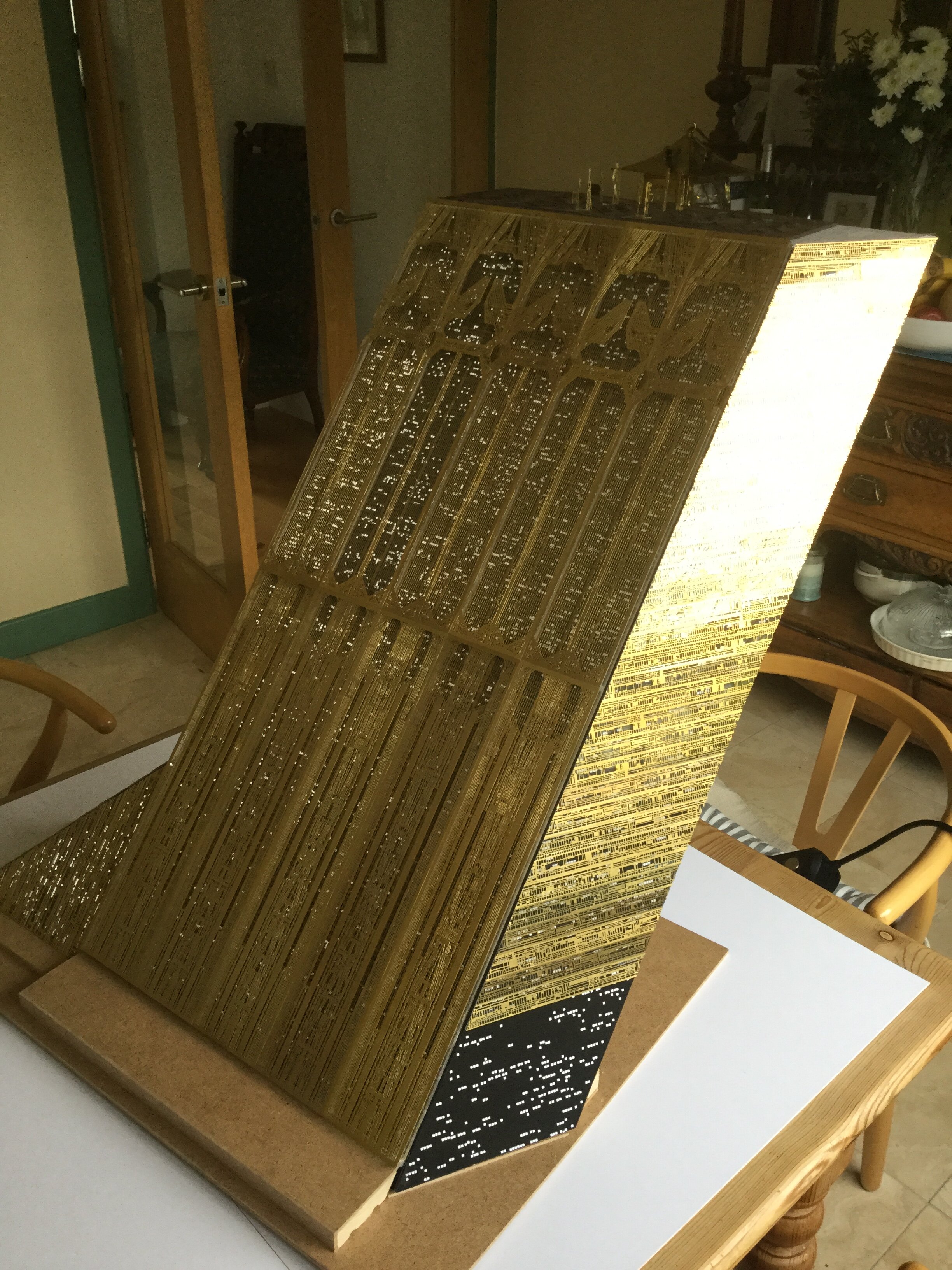 Looked up CNC milling machine for architectural model building. Only the best for creating your light box design. You have gone “all- in” on this build (to steal Joberg’s words). Great to follow this thread.

Amazing work mate!! Not the type of model you can easily reproduce for others. One of a kind it is!!

So, a few notes about buttress. I mentioned in a previous post that that chamfered baton at the bottom of the buttress is extremely important to anchor and support the weight of the model. I also put the same inverted baton at the back because the downward force of the model tends to push the bottom upward and slide backwards. That’s just physics.
Also ,on the original model ,the baton went right across the face of the wedge as well. I didn‘t think this was necessary since the wedge is self supporting. So I put a smaller baton just to keep it in position.
The top of the wedge is a contentious also. I have a good reference ( which I can’t publish) which shows the roof of the wedge was detailed with strip and various patterned styrene. It didn’t look right or comparing it to the beautiful detailed roof, it just looked rough. But on some images it looks as though the etch was carried downward and over the wedge roof. Thats the approach I took here and it looks .... appropriate.
And finally about the etch on the sides and on the wedge. Originally this was glued directly to the acrylic light box and painted( and you can see Chris Ross in some online images touching up with a spraygun. What I havent confirmed is that did they scratch the window lights into the paintwork afterwards. It’s a mystery. I found a solution to this by dealing with it the same as the large front elevation, keeping the etch and light patterned artwork seperate.

Also, my wife threatened to beat me over the head with a baseball bat if I put paint on the brass etch.

Its evening, another image. 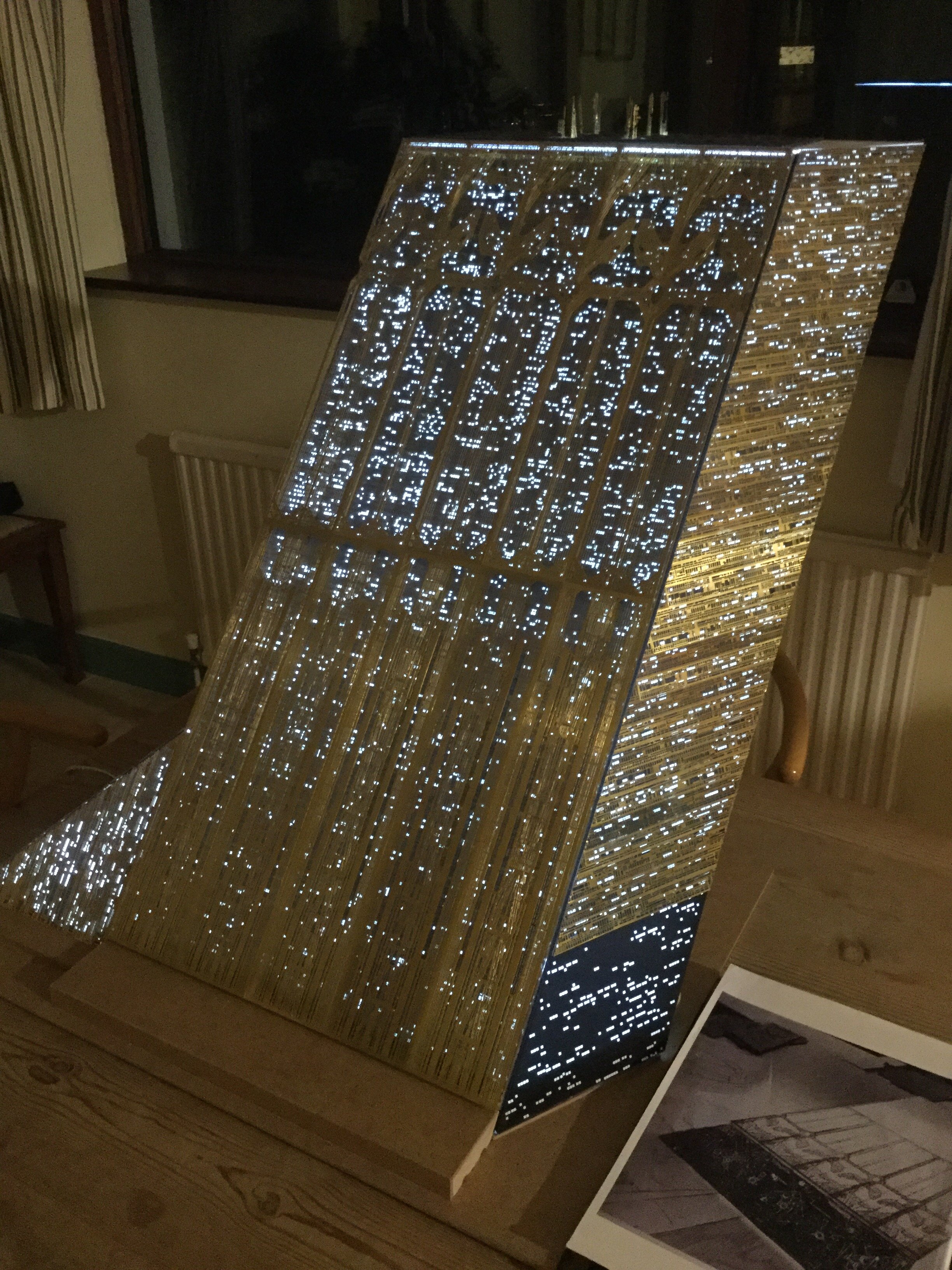 Truly, Truly an Amazing work of art and passion.

This is simply beyond Impressive!!!

Hats off to you John!!

Sean,
I am truly honoured to have your comment here and anything I do is pale in comparison to the superb work that you post here on the RPF. I am new to Studio Scale modelling but always up to the challenge of learning.
And yes it’s passion and love of subject matter that is a huge motivation and it’s great to share it with the folks here who understand why we do this crazy, wonderful work.

The beauty of this thing is just mind blowing!

Pyramidrep said:
Thank you to everyone for the kind and encouraging words.
So, one last check on lighting today before the box gets glued up/ fixed and the rest of the etch gets attached. Still a few days of finishing up the detailing on a new master pattern for the top.
View attachment 1524613
Click to expand...

What I want to know is in what year did the Borg take over the City of Los Angeles building dept, ; ) Just kidding, that thing is a thing of beauty. Great work Sir,
Joe

Great pic man yes, sometimes it's easier to paint the transparent plastic and then scratch the painted surface to get the lighting through...fast and dirty (à la Death Star) I'm in accord with your wife, btw

Pyramidrep said:
BrundleFly, Many thanks .
PM sent to you.
Click to expand...

An update just to let ye know that haven’t “goofed off “ the project.
Since Covid restrictions more or less ended here, I have been busy with other work.But I was given an opportunity to go to New York this week and after 25 years of wanting to see the Close -Up Section in the Museum of the Moving image, I finally got to see it for real.
I have to say its in much better condition that I thought it was. Some little parts missing or warped. And the colour on the elevator hood a giveaway that it’s a replacement/ repair. I could also see some model parts on the roof that are new to me, so I have more searching to do find these.

I highly recommend a visit if you‘re as big a fan as I am. 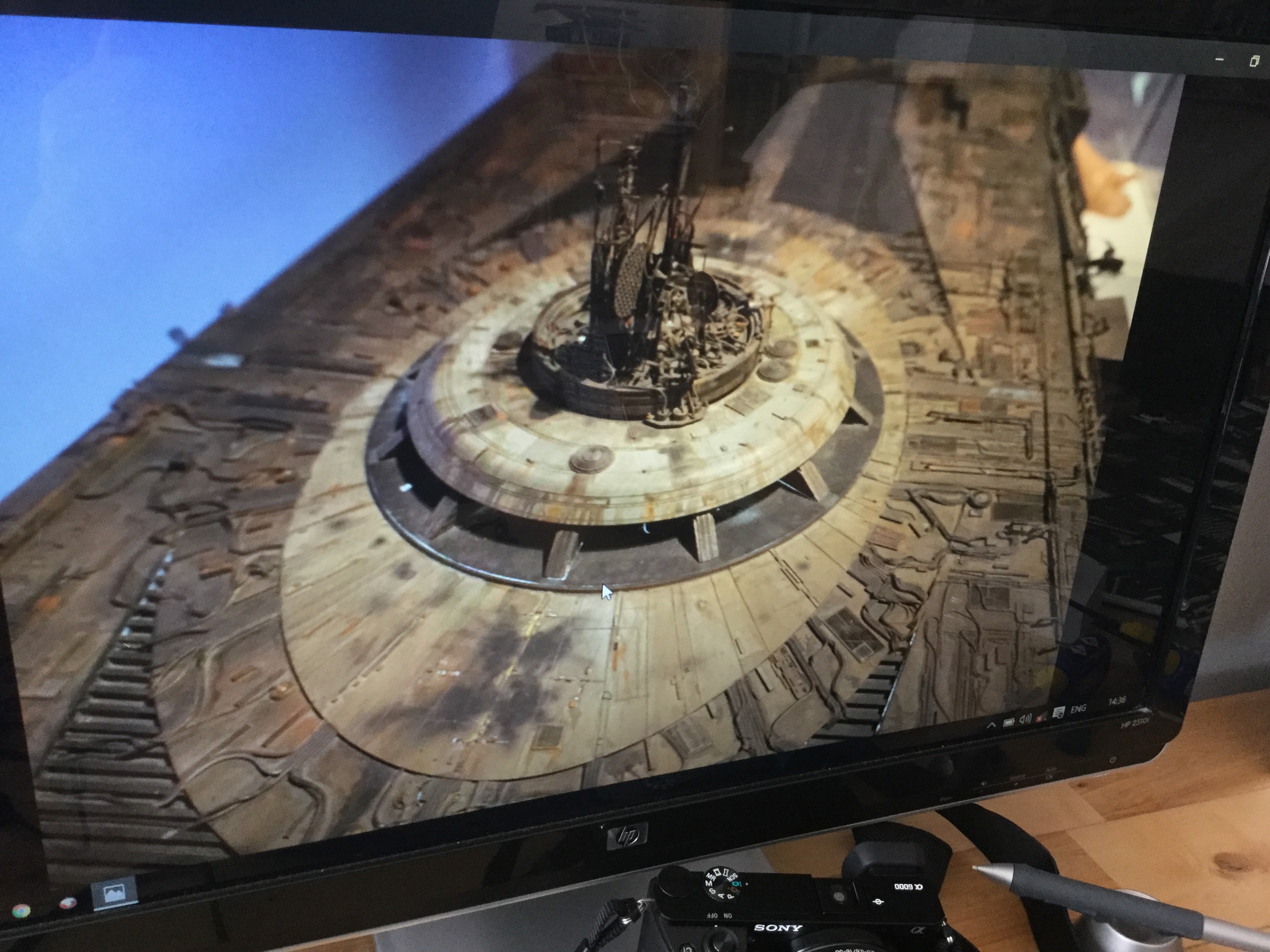 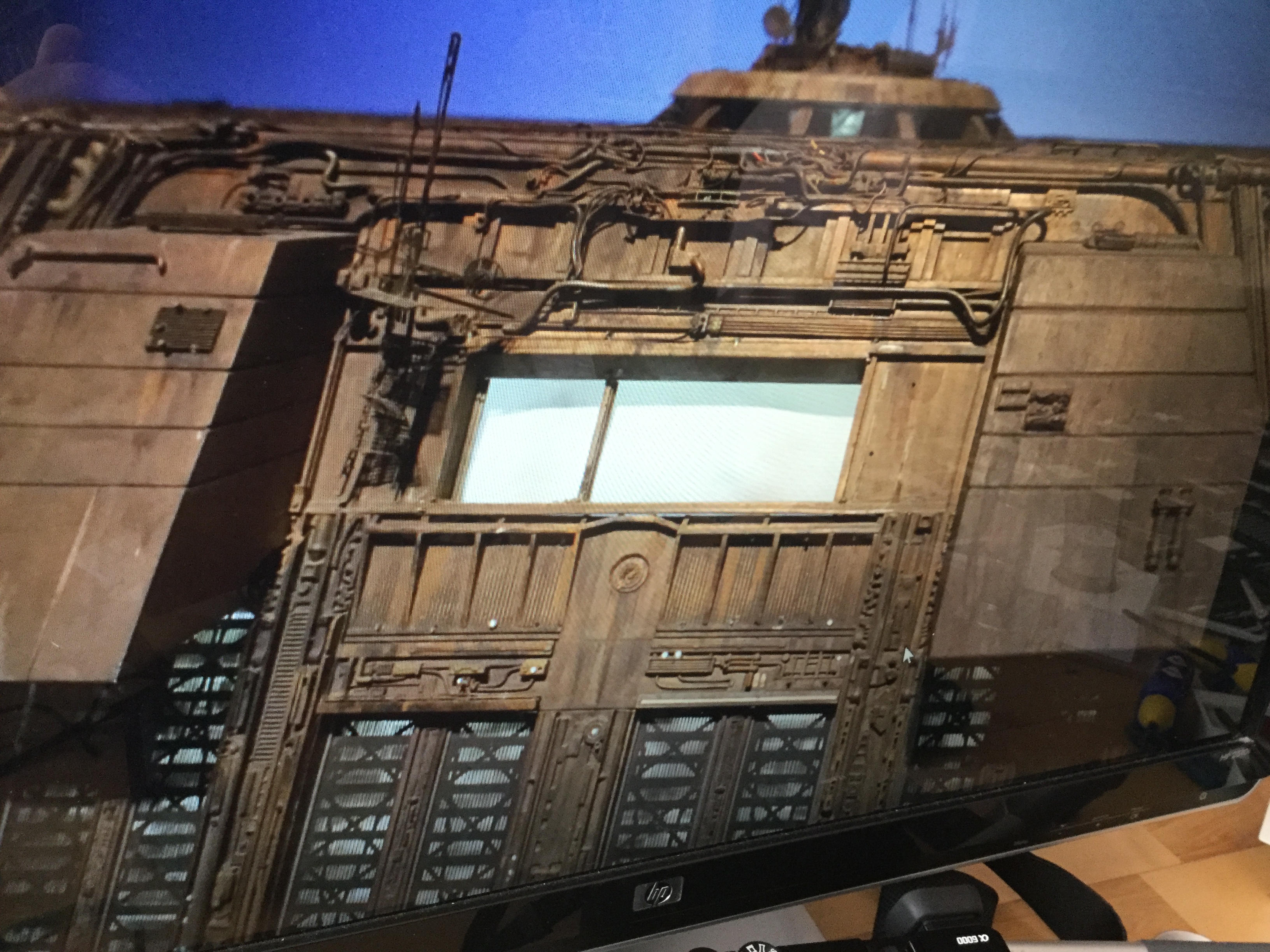