A handful of new GB prop additions to my collection...

I put some short 4-40 screws through from the inside and attached the new knobs from Etsy seller GBHQPartsDepot onto them via their included set screws. 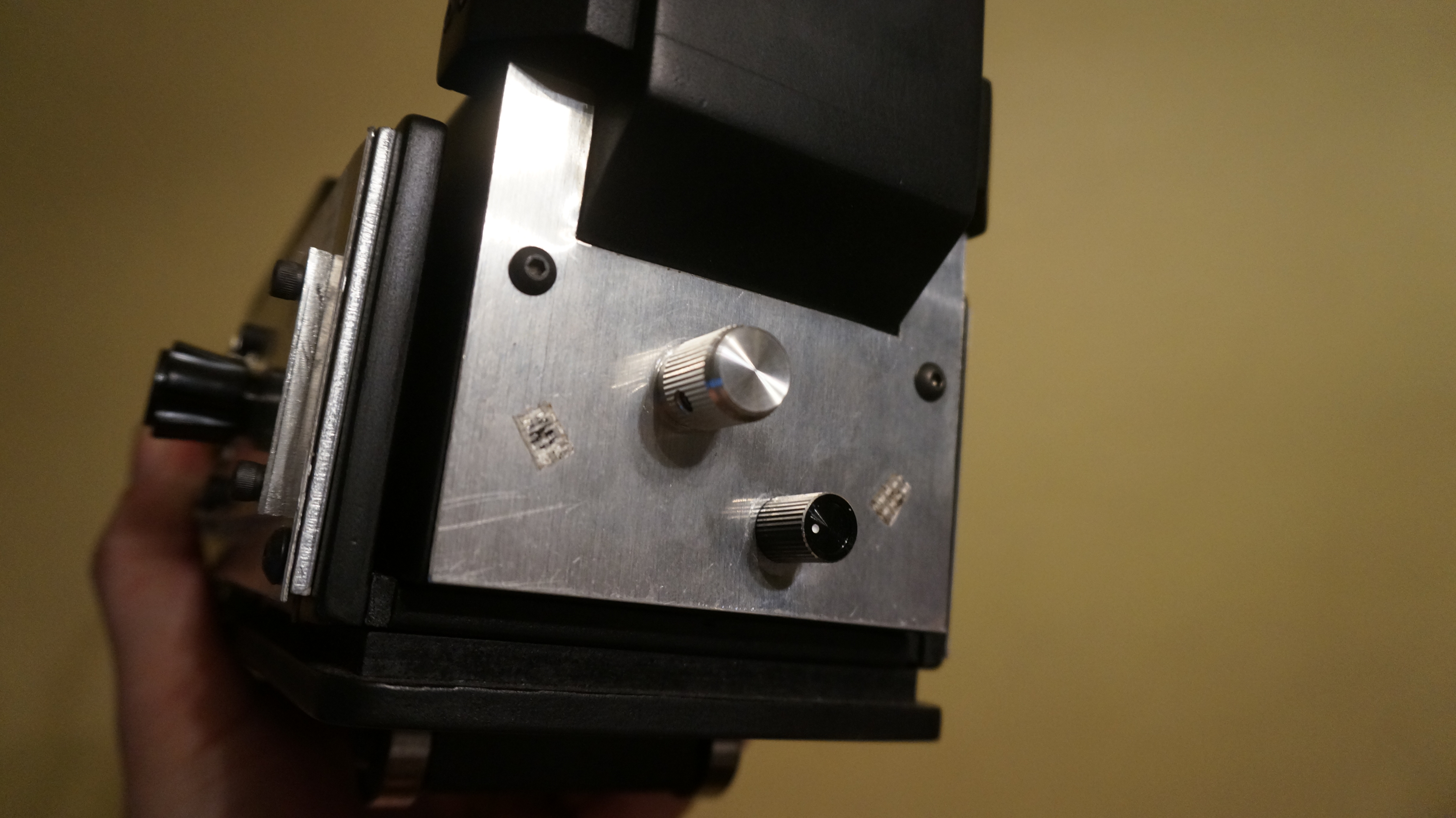 I had some different rectangular knobs from Glenn Frederick that I've affixed for this photo with double-sided tape. But the set from Etsy includes some very similar-looking ones. 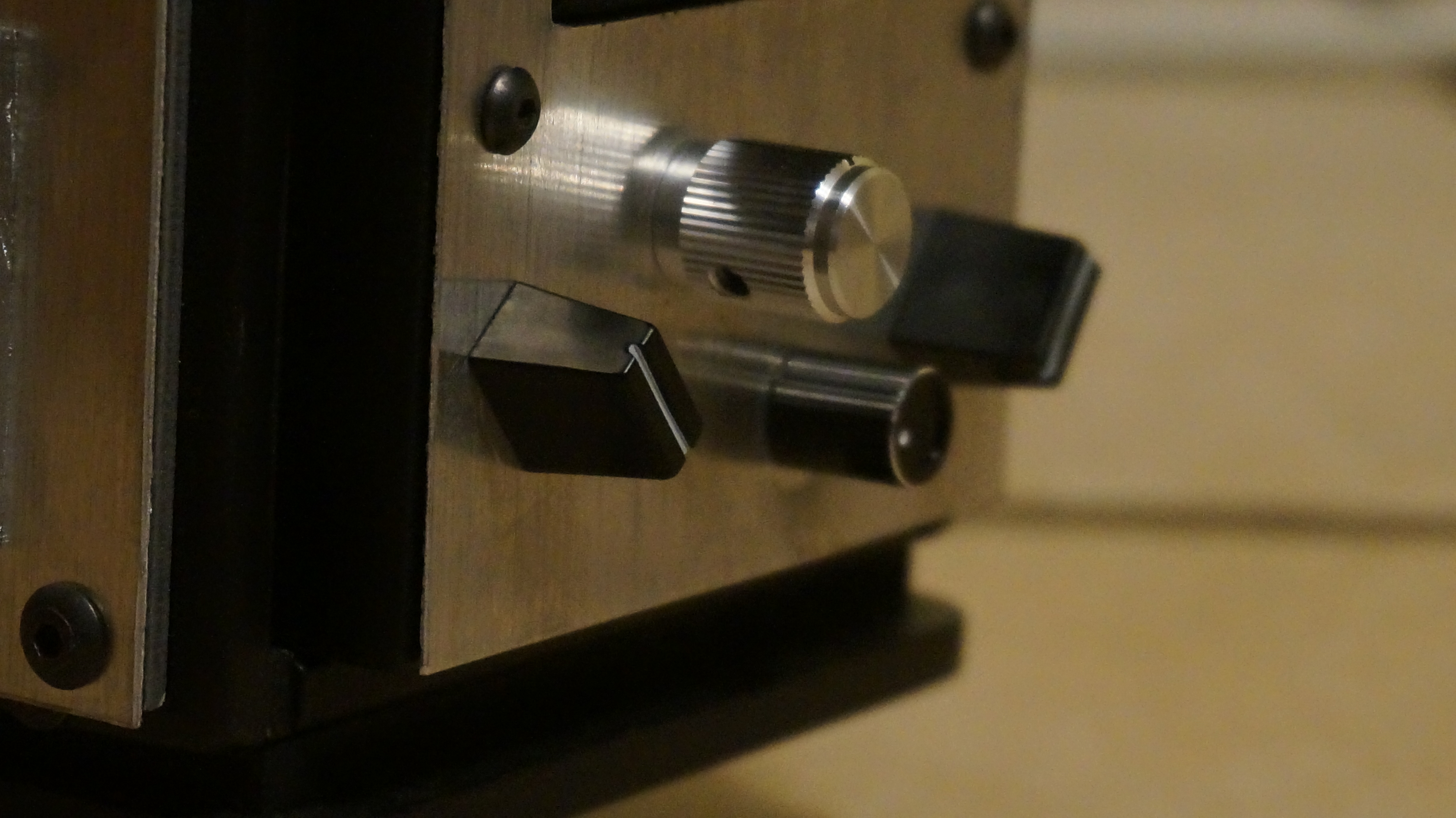 Any suggestions for attaching those slider knobs more permanently? They have a rectangular hole on the back. 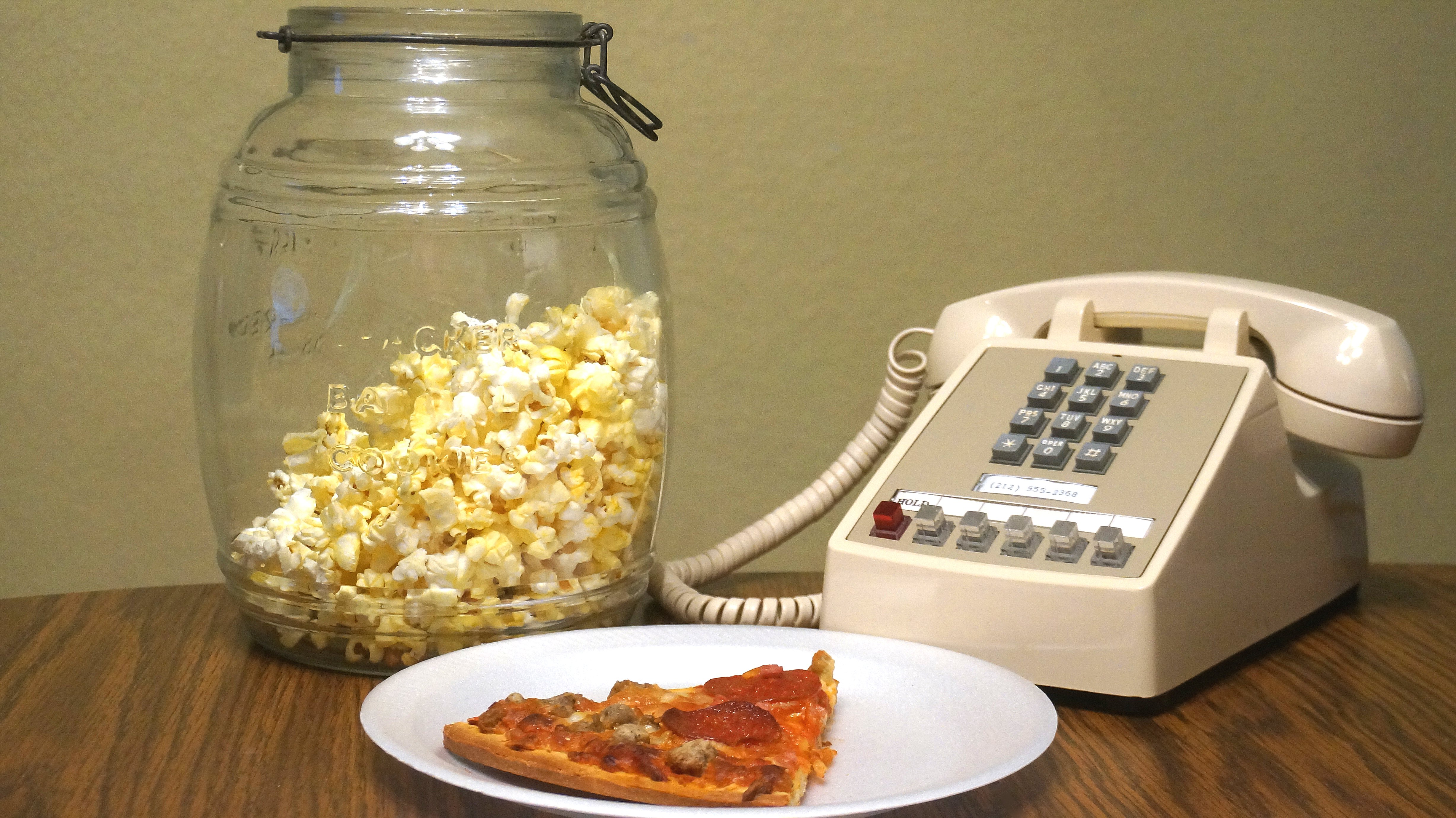 I finally finished my police-car-to-taxi conversion. It took me many coats of yellow paint and many wet-sanding steps before I finally got it looking as smooth as I wanted. 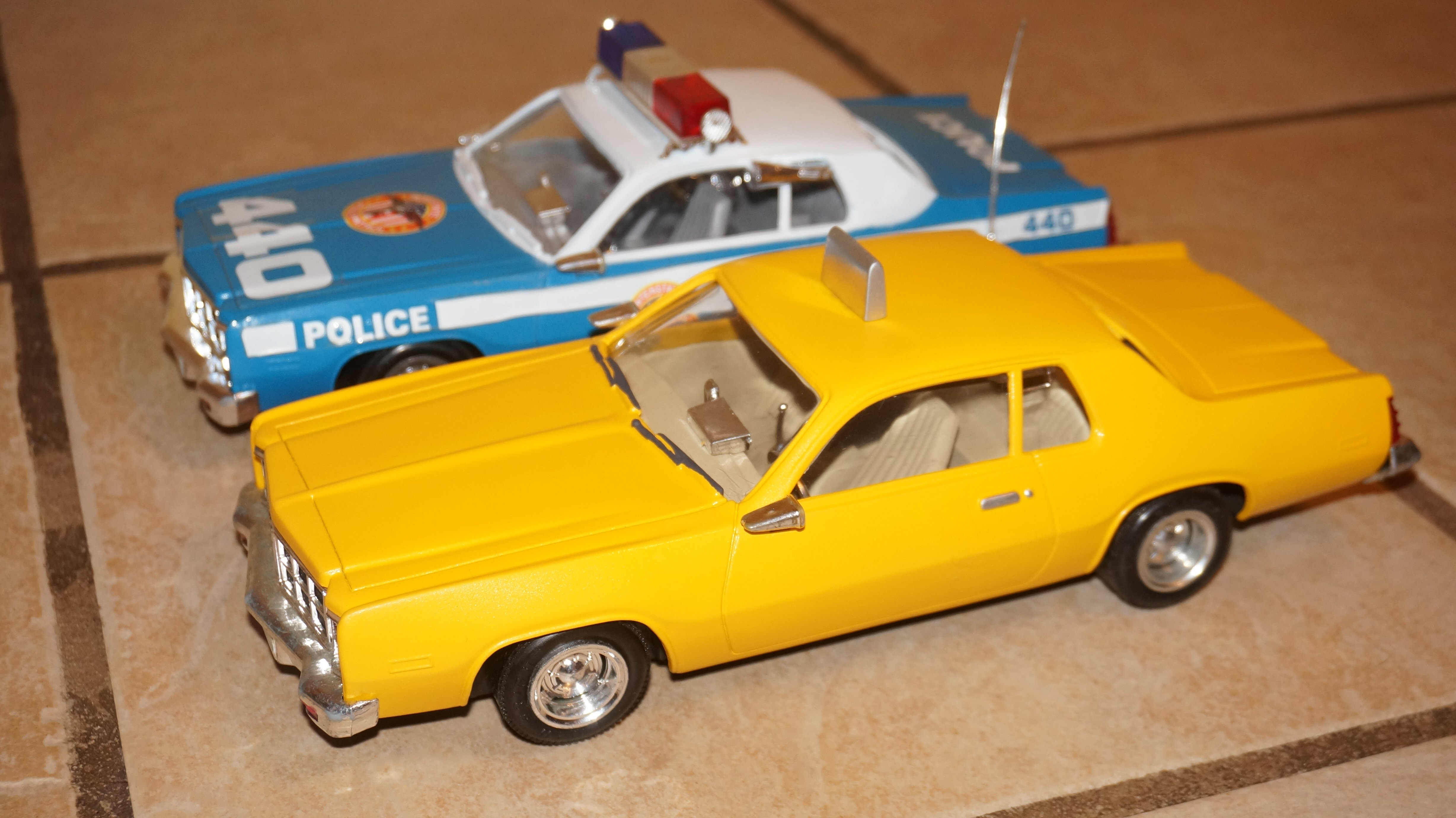 Below are some reference pics of screen-used police cars and taxis. The two under glass at Planet Hollywood in Disney Springs (Orlando) were taken by my friend Paul Clark. The more battle-damaged taxi is an image found online. As you can see, the taxis appear to have been converted by several crew members simultaneously, so there are differences in the details such as: the placement of the sign on top, the door handles, the windshield wipers, whether or not the sideview mirrors were painted, etc.

For mine, I went with an amalgam of details gleaned from several pics of the surviving models as well as on-set pics of the toys at the feet of the Stay-Puft Marshmallow Man costume.

Fabricating the roof sign stymied me for a while. I made a template from cardboard and then made the final one from white styrene. I went through three previous attempts before I got one to curve correctly. The first two snapped, then I decided to try heating it with a hair dryer... resulting in the third one melting.

Even the sides took a few tries. The first ones were accidentally sanded through at their tops while I was shaping it, so they had to be sliced off and re-made.

Despite my need for bifocals and my hands becoming less steady over time, I managed to get the windshield wipers the way I wanted them, though I admit there were a couple of glitches with the acrylic paint that required a quick douse under the faucet and starting over.

I had thought I would just glue the sign to the roof when I was done, but worried it would be prone to snapping off easily. Luckily, I decided during the final reassembly to replace the windshield and bumpers with better ones from two of my other police cars, and while dismantling them I was visibly reminded that the lightbars are held in place by a screw. I fished out the leftover parts from the taxi conversion, and sure enough there was the screw I'd removed from the white beater that had become this very taxi. By sheer dumb luck, the hole I'd already put in the bottom of the sign-- so that I could insert a wooden skewer to spray-paint it-- was the perfect size for the screw to also anchor the sign in place.

The last step was to cadge side-view mirrors from one of the white police cars, and everything was done. I took a few group shots with my blue police cars and some other appropriate vehicles of similar scales. 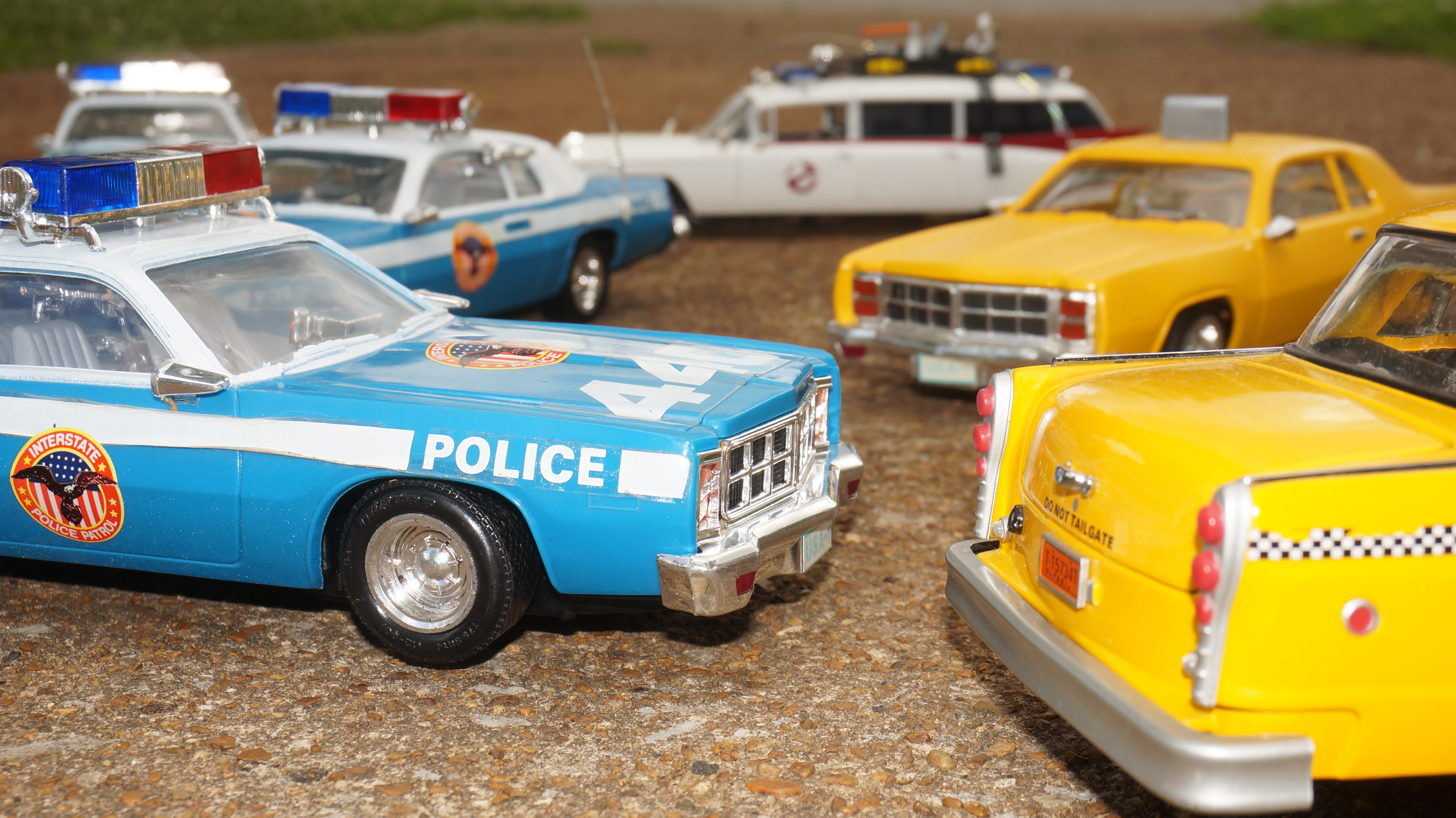 RPF PREMIUM MEMBER
Cool! I look forward to your video recreation of Staypuft walking through NY

It needs a little work, yet.

RPF PREMIUM MEMBER
Bahaha! With your attention to detail, I have complete faith that you'll get there eventually!

ZeroSum said:
Cool! I look forward to your video recreation of Staypuft walking through NY
Click to expand...

That shot, and plenty more of the miniature model cars like those used in the movie, are part of this video. Enjoy!

Thanks! It still needs a disassembly so I can replace some broken switches and do some rewiring, but I just have so many other projects at the moment. One of these days.

DocNewborn said:
It needs a little work, yet.

that just made my day, lol. Thank you.

I was never happy with the slightly 'sparkly' color of paint I'd used on the bell of the Faraday alarm. So I've stripped it and painted it with a more even color.

Big thanks to Loren White for the latest addition to my GB prop collection.

RPF PREMIUM MEMBER
That has a red LED display. (not LCD) Only a few numbers maybe 3 or 4 digits. The black part has heavy duty bolts and a solid steel looking black front piece attached to it. It looks like a commercial piece instead of consumer electronics. The white part in the lower blue label almost looks like a person's signature or some company's name, but in a script font instead of normal font.

On my Facebook page, two or three people suggested it's a heart rate monitor. Nothing definitive yet.

DocNewborn said:
On my Facebook page, two or three people suggested it's a heart rate monitor. Nothing definitive yet.

That could fit, well. 3 digits would be what you would need for a heart rate. And the minimal buttons on the front would be because of the limited interactive nature of a monitor. You don't need much controls if it mainly monitors.

RPF PREMIUM MEMBER
found this searching vintage heart rate monitor on eBay. It's not it. I couldn't find the year of it, but it has an LCD instead of LED.
Described as Sears Digital Electronic Exercise Pulse Monitor 29171

This is consumer electronics, not commercial, but the similarity is interesting.

Call me crazy, but I'm thinking that the part you're looking for may be part of the conductivity kit, as evidenced by others that seem to have a similar keypad. This is NOT even close, but you can see what I mean here.

Recent conversation on Facebook about this beer can led me to want to track one down. Specifically, we were discussing whether or not it was a Michelob Light or a regular Michelob. It took me nearly a month of scrolling through 'saved searches' on eBay before I found the perfect one to add to my collection. It arrived today.

Early on, I spotted a collection of several cans which included one of these, and nearly pulled the trigger, but at the last second I noticed in the description that they'd been opened at the bottom with a punch, and still had intact pull tabs on top. I decided to wait for one which would more closely match the one in the film. After all, you see the intact underside when Ray Stantz takes a drink from the movie prop.

When this one popped up with no tab, intact bottom, and a lower Buy It Now price without eight other cans I didn't need, I was glad I waited.

The real irony here is, I'm a lifelong teetotaller. In fact, the only time in my life I've ever purchased a container of alcohol, back in 2014, it was a Crystal Head skull decanter of vodka, so that ALSO was because of Danny Aykroyd.