Exceeded my expectations already! That will make for some intense gaming, ooOh, the VR!!

DarthDisembowel said:
OMG this is fantastic! Hi Sithslayer78, my name is James Clement, lead gameplay designer on Star Wars: Squadrons. I actually pitched the game along with the lead gameplay programmer. The team absolutely adores this sort of thing, and I can't wait to see the final product!
Click to expand...

That's incredible! I remember when I first got back into the old games around 2017, I was really sad that I'd probably never see an X-Wing game ever again, and the best I could hope for was a tabletop game. There are other space sims, but they just aren't the same. I just want you to know that I play almost every day, and this game is every bit the game I hoped and dreamed for. Thank you so much for your work, and I hope to be seeing more eventually!
Also and unfortunately, releasing the game may have been the worst possible thing anyone could have done to the build schedule, but I promise it'll get there eventually!

So, I've been gone for a while. At first, I was offline trying to spend all of my time getting this ready for the release of Squadrons, but then once that zoomed past I couldn't stop playing for long enough to get anything done. A lot has happened over the past few months, so I'll get right to it.
First, the rear canopy assembly was a focus area for a while. I managed to skeleton out the structure from wood, but then I had to add the "stuff" within. I started with making foam boxes based on measurements taken from the Battlefront II files: 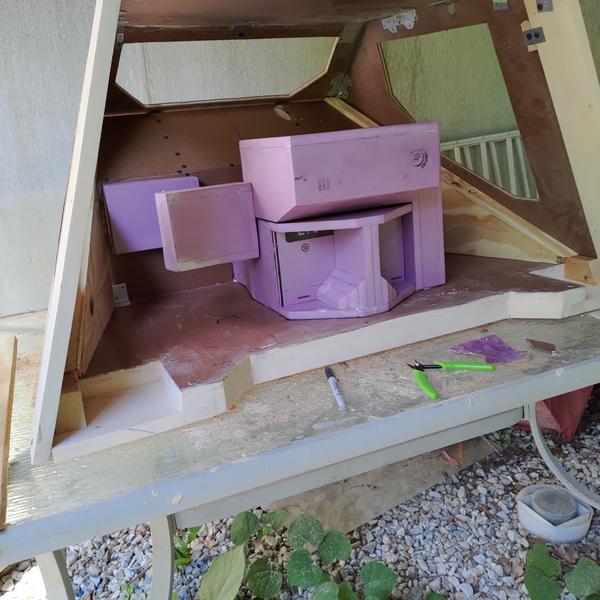 Then, I added smaller greebles. The hardest part of this was figuring out what exactly was happening between the canopy and rear cockpit, but I managed to find one single solitary shot from TFA that showed the area being covered in some sort of quilted fabric. I had some leftover from an old costume, so I prototyped that region out of wood (it all actually fell together really nicely) and covered it. Also, I laser cut some of the panel details and hit the SLA printer again for tons of greebles! 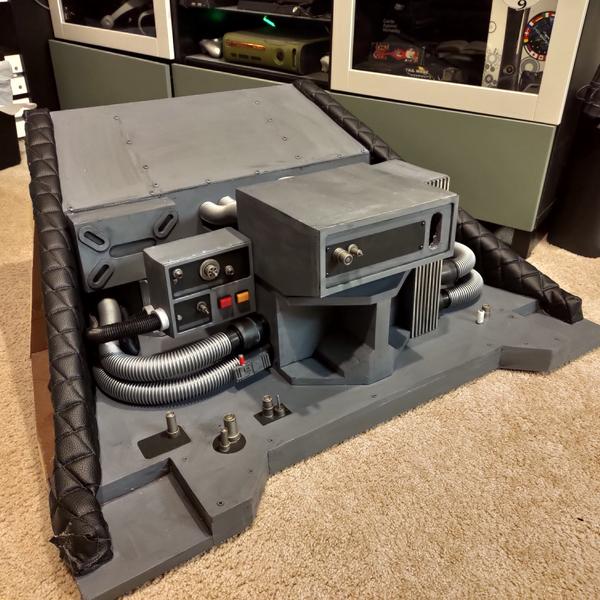 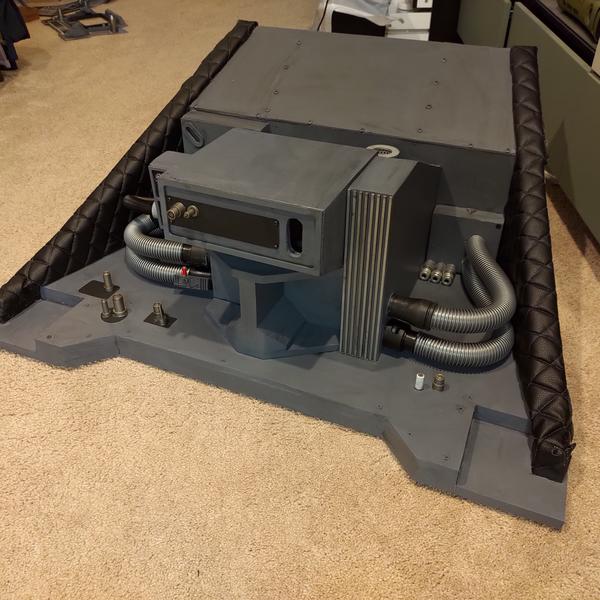 After that, I had to start filling in non-visible areas with various junk I had lying around. 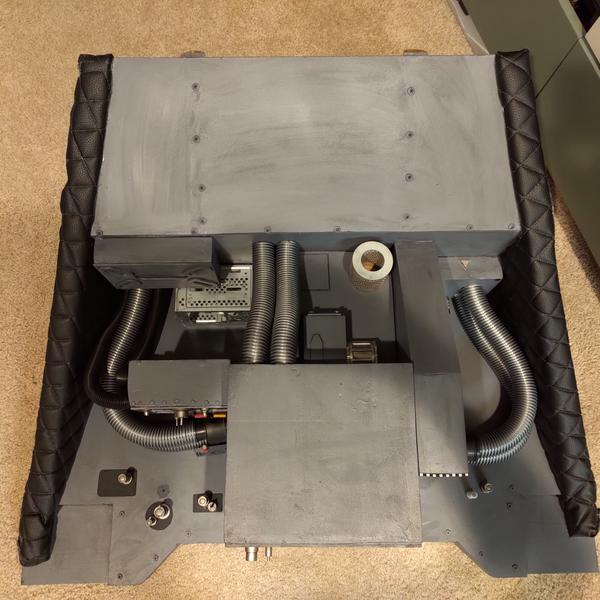 After that, All I had to do was screw on the canopy, and mount the rear portion to the pit! More on that later. You'll notice that the opening motors and targeting computer are missing, and that's because I'm still undecided on those. I have a strong hunch I'll be making dampers out of PVC to replace motors since motors are heavy, expensive, and dangerous to small children and foam canopies. As for the targeting computers, It's a tossup between a useless but accurate canon setup, some kind of a mix between that and OT to have a functioning targeting computer (likely), or just a hangar for my VR headset (lazy way out).

Next, the remainder of the frame had to be built. This was mostly out of common board and 2x4s, with a strong focus on being stowable in my truck, and modular for deconstruction. 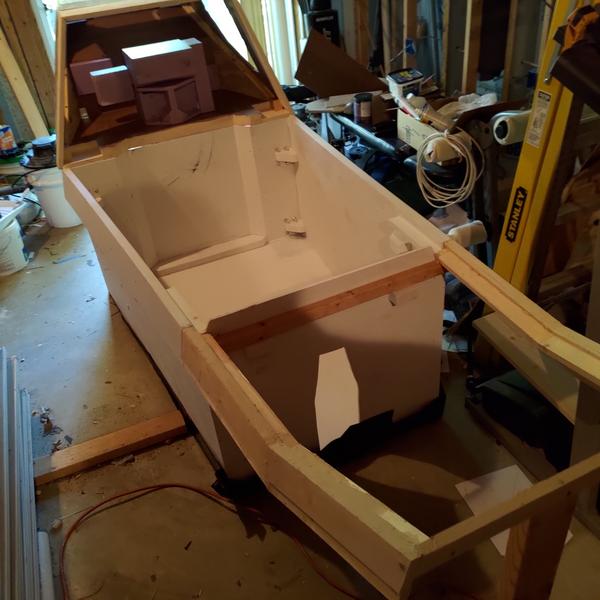 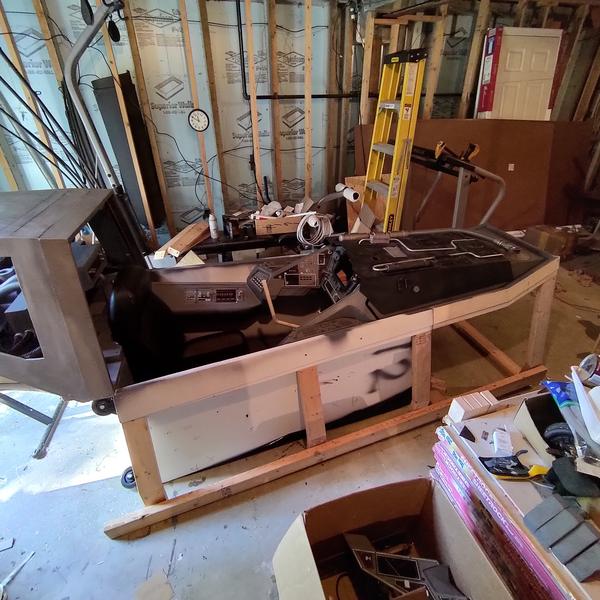 After that, it was back to the controls. Had to do some mop-up with the OT controls, including adding a cup holder! 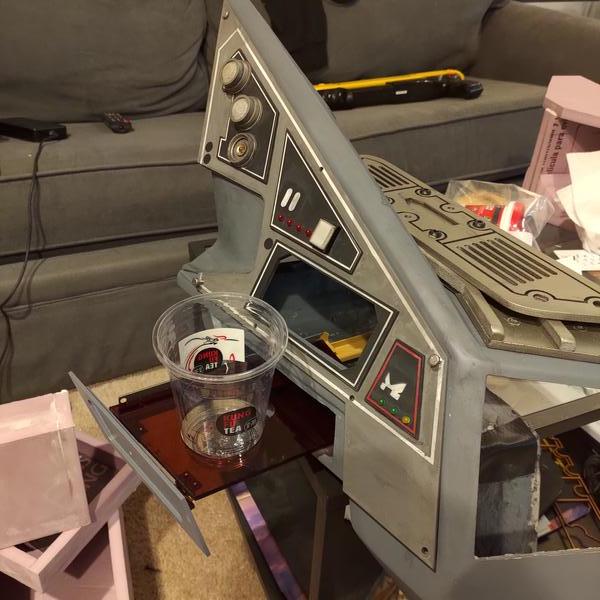 Also, my Virpil flight sim hardware came in, and while I was at it I built some nice desk mounts for those (And my old STL) as well: 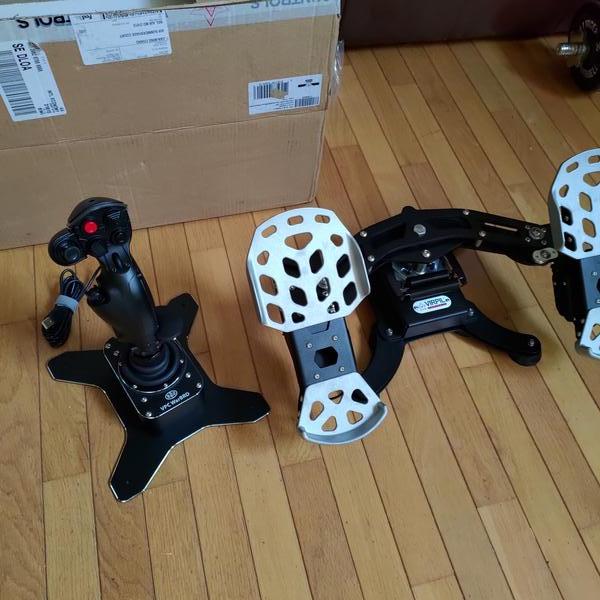 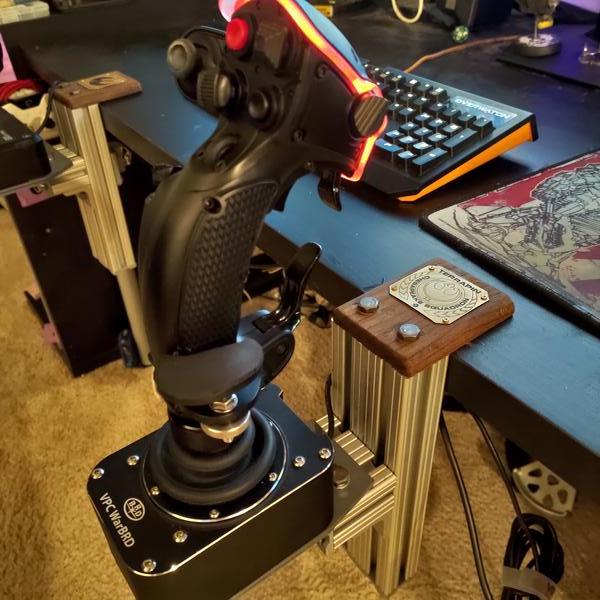 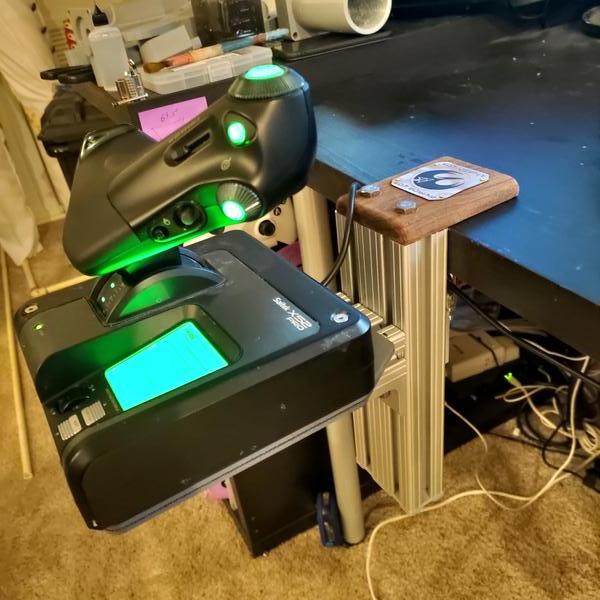 Then, I worked on the T70 panels. For some reason, Imgur is having a heart attack so these will be low res, but I'll try to replace them later on. If you want to see the full-res versions, check out the hi-res album at the top of the thread! Anyway, got those built and integrated: 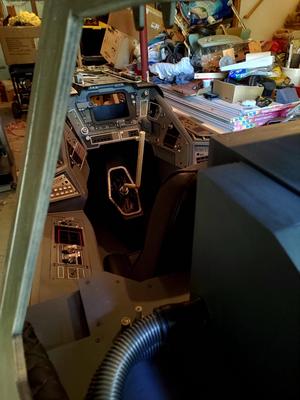 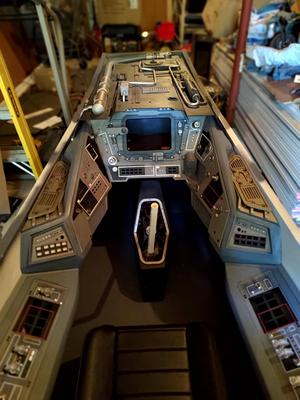 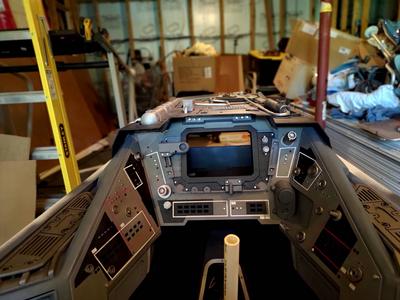 After that, it was on to paint the panels and make sure everything (so far) fit together! Don't have too many pics because the workshop I'm working in isn't great for photos, but when I move the stuff out, It'll be ready for show! 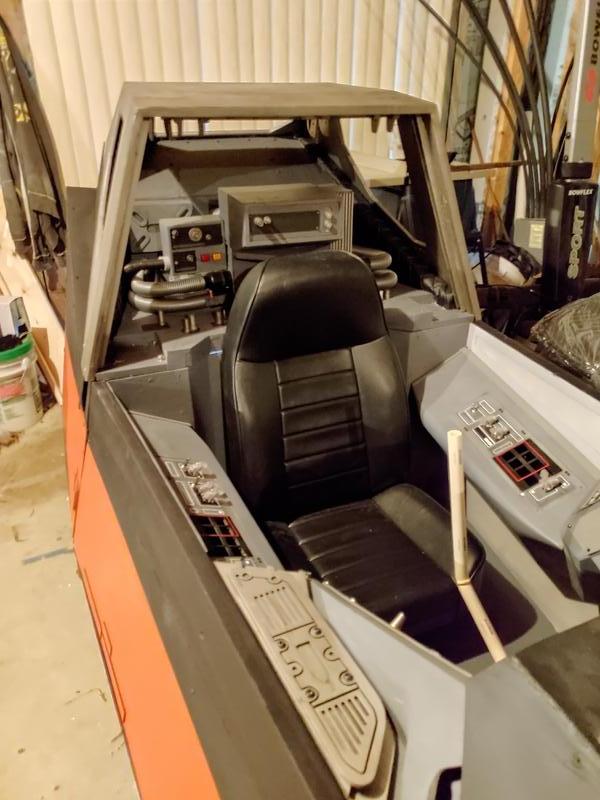 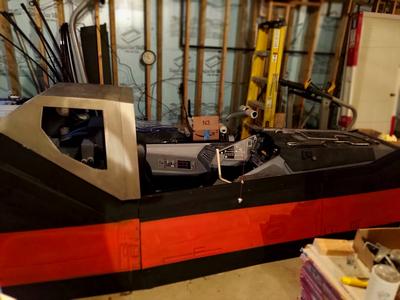 For the next couple of weeks, I'm in quarantine and can't really do anything but solder. After that, I'll be relocating the whole thing and will work on the last physical part, the canopy. That'll involve modifying the rear canopy to accommodate the hinges. After that, it's all electronics, and fine-tuning. Hopefully, there will be a convention to bring it to by then. If you want to see anything else up close, feel free to say so, and I'll get some pics! Thanks!

Also, here's the necessary matching costume (Such as it is in its disused pandemic state)! 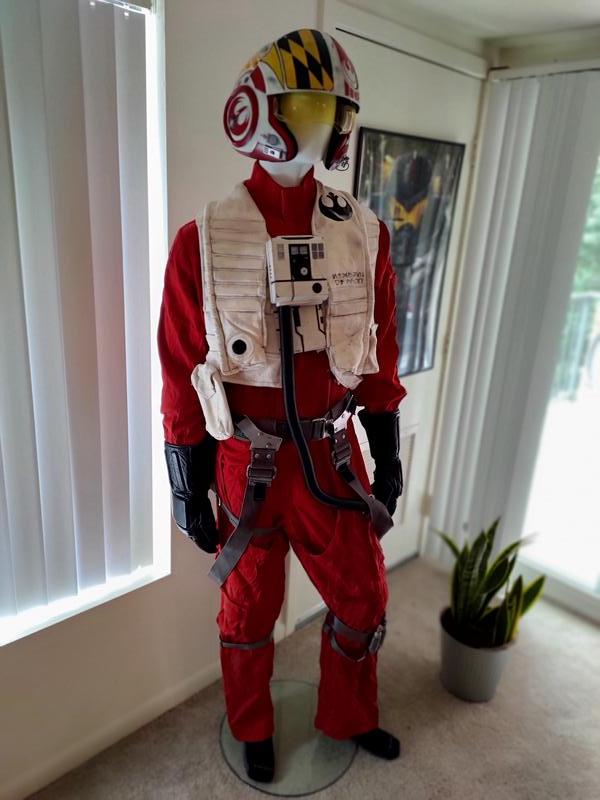 When all is said and done you need to write up stipulation that you be buried in this thing when the time comes. Such an incredible project that I’m pretty sure EVERYONE who has ever looked at a star fighter has imagined.

Like the cup holder! Functional, and can slide back in without affecting the aesthetic.

RPF PREMIUM MEMBER
I can feel the dark side growing in me as my jealousy of this project becomes all encompassing!! 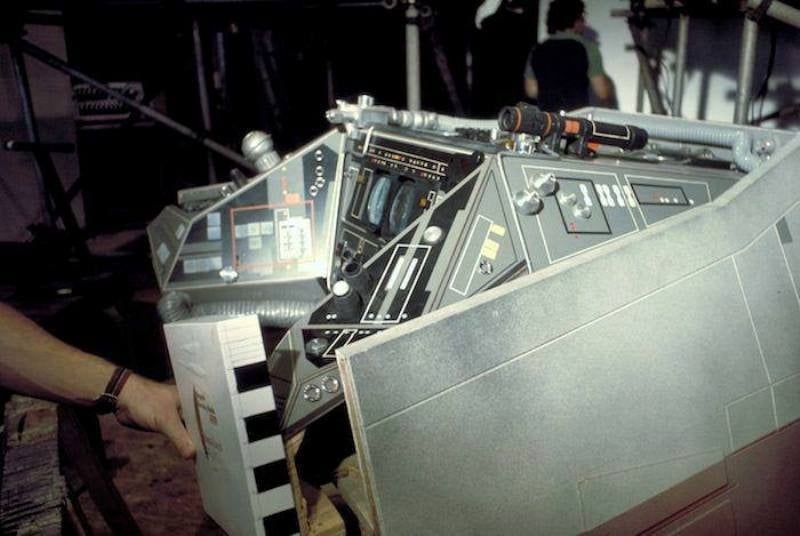 How have I been missing this?