I am in search of help with the Tron Disc Project. First of all, I don't know jack about programing or electronics, but I'm a quick learner.

I am currently following the two guides here: 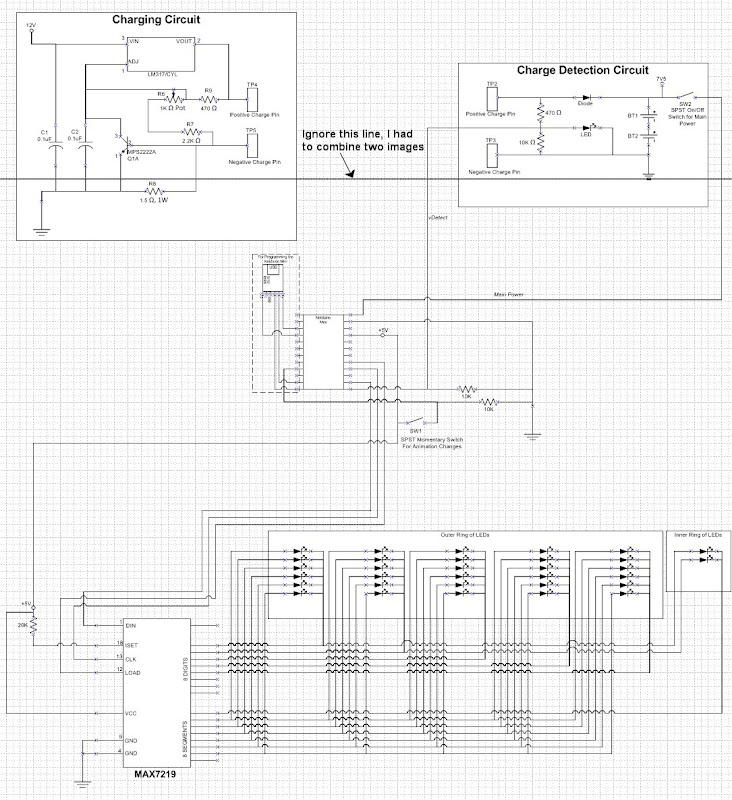 This is the basic circuit. But I would like to alter the following:

- use a premade USB charger unit like this: sparkfun micro usb charger - Data sheed with schematic here
- add more LEDs: 30 outer ring, 16 inner ring (8 on each side) and 8 for the solo lights with bezel mounts on the inner surface of the disc (4 on each side) = total of 54

The basic idea is to create the same animation as in the movie (youtube link @ scene 34 sec).

Now the questions are:

- Can I simply smolder the usb charger directly to the netduino and and attach >>both<<??? battaries onto that one charger? If yes can you please clarify how the batteries should be wired/smoldered to the usb charger?

- If I go with 54 LEDs:
- Do I need other batteries? I bought 54 x nichia 6500mcd 45° - data sheet here
- If the batteries stay the same, will my LEDs simply run out of power faster or are they going to shine less bright?
- If they shine less bright, what battery do i need?

And my progress so far:

bumping my self shamelessly with more useful circuits since it took a few hours for the mods to approve my post and thus it ended up on site 3 from the beginning ?

Here is a circuit of the usb charger

Do you have any trimmed pics of your new rings? I'm trying to decide if I should just try to bleach the color out somehow..

I was actually starting the project to mod my Tron disk. I think I'm going to keep it simple and use a spare nFlex LED controller from TaskLED.com. It will provide the LED shimmer similar to the effect seen in the movie. The controller can drive up to 1 amp of current so I should be able to stuff plenty of standard LEDs in the disk. As for power, (2) 14650 LiIon cells will provide 7.4 volts. A recharge port is $3 and super easy to wire into the nFlex.

TallDarkandDisfigured said:
Do you have any trimmed pics of your new rings? I'm trying to decide if I should just try to bleach the color out somehow..
Click to expand...

Nope the rings are not done yet, still need to complete the second half of the mold. The Rings will be done by end of the week though. Will post results then. I am thinking about redoing the molds at some time as well. It was my first attempt ever at doing something like this, so the surface of the whole mold isnt perfect, but the part where the actual rings are looks fine so far.

@Delmustator Ill check it out, so far I like the idea of the netduino though, since it is highly customizable.
B

okay well ****, my second half of the mold failed, and took the first with it to the grave.

i forgot to add mold release and the silicon stuck so hard to another that i only could cut it free, i tried to save both sides, but due to the cutting, both sides don't close good enough anymore ...

the part of the imprint looks flawless though, no bubbles, no dirt, maybe i can at least salavage the mold for the inner ring from this.

but well it was my first attempt ever doing something like this, so i guess it turned out rather good.

need to order new silicon and think of a better way of fixing the original ring, plastilin doesnt cut it, i though maybe i should fix the original ring in silicon first, then make one side. after that remove the silicon that holds the ring in place and do the other side.
Last edited: Oct 28, 2011

Yesterday at 10:39 PM
BladeRunnerFan
B