Was there a new email today? I've got nothing in my inbox.

AnubisGuard said:
Was there a new email today? I've got nothing in my inbox.
Click to expand...

Chris posted the picture in the comments section on the blog. No new emails till Monday.

Well, I've been staring at the phaser auction threads on three different boards till I'm crosseyed, so for a change of pace, here's a gratuitous rendering of a tricorder. 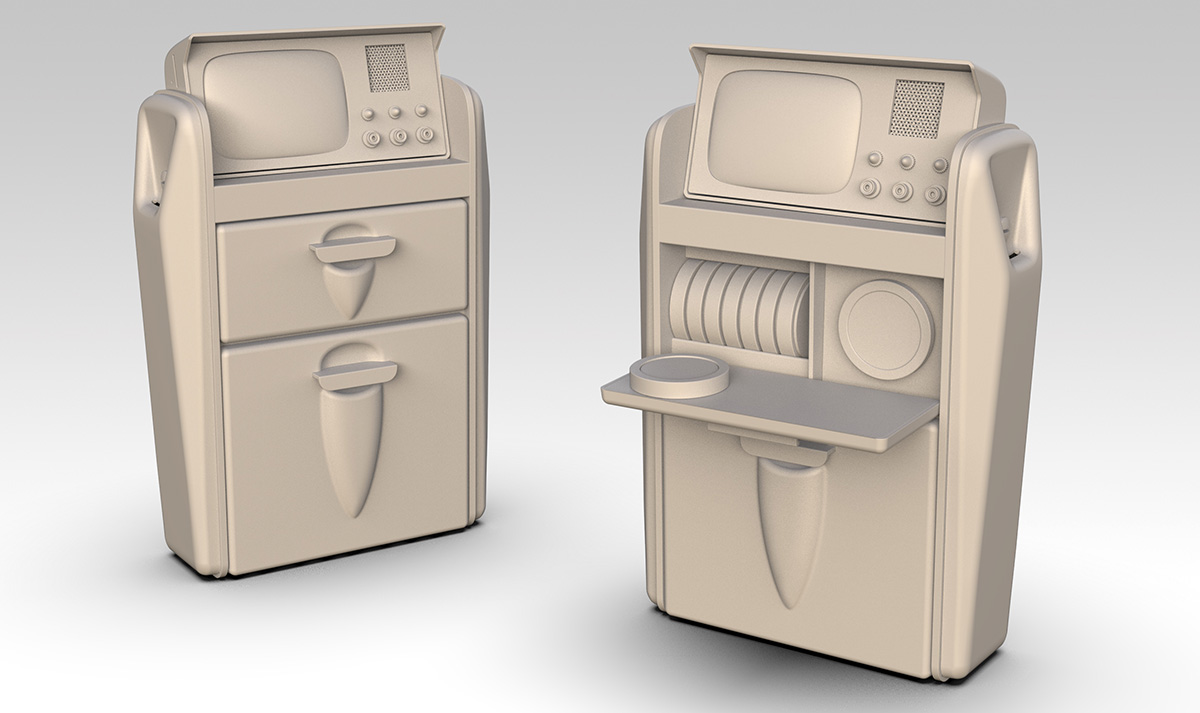 Fabulous news! TWC realizes the comm texture was a bit too proud of the surface, so they're going to tone it down a smidge on the tricorder:

The Kydex texture is not a simple acid etch. The texture has a 3D shape to it. As a result, we decided to replicate that using a laser etching process. The process is very time-consuming and expensive, on top of that it’s a one time deal… once the mould is textured it’s go with that finish, or make a new mould and then have it textured again. For the communicator’s surface texture, there was no easy way of trying it out. We had had some sample steel blocks laser-carved out at different depths using the texture pattern file, but they were negative versions of the texture. So we then poured casting rubber onto the blocks so that we could try and gauge the best depth. Unfortunately, the casting rubber while taking a great impression, was rather matt and soft and so gave a false view of the visual depth of the texture. In the end, as a result of that, the one we chose turned out looking a little deeper than we would have wanted, once it was moulded in ABS. We are using the same process and in fact, the same company to texture the tricorder tooling and we obviously learnt a great deal from the communicator experience which we will be factoring into our decisions over the depth of the tricorder texture in order to make the tricorder texture a little shallower.
Click to expand...

What's that info on the texture from? Not seeing an update on their blog

NVM, I see it was a comment on a question.

Posted by Chris Barnardo June 14, 2021
(This article was first emailed on June 14th, 2021 to fans who had registered an interest in finding out more about our Tricorder.)
When different lines cross, interesting things happen.
And so it happened that when Wah Chang, the artist, sculptor and master prop maker, crossed paths with Dr. Oster through Edmund Scientific, an army surplus outlet that specialised in supplying lenses and telescope kits, more than just a prop’s dynamic eye-candy resulted: something of huge scientific relevance was built into the Star Trek props.
Chang didn’t need to spend too much time leafing through the 1965 Edmund Scientific catalogue 661 to work out if it had what he needed; the cover told him what he was looking for would be inside – Science, Optics, Math – the catalogue’s byline pretty much describes the tricorder’s functions. From a prop-building perspective, Edmund Scientific was an Aladdin’s cave of useful goodies, but the feature on moiré patterns on page 74 must have jumped out at Chang. Simply sliding those evenly spaced lines over each other quickly creates the most dynamic and mesmerisingly technical patterns of billowing arcs perpetually bubbling out of every edge of the image. 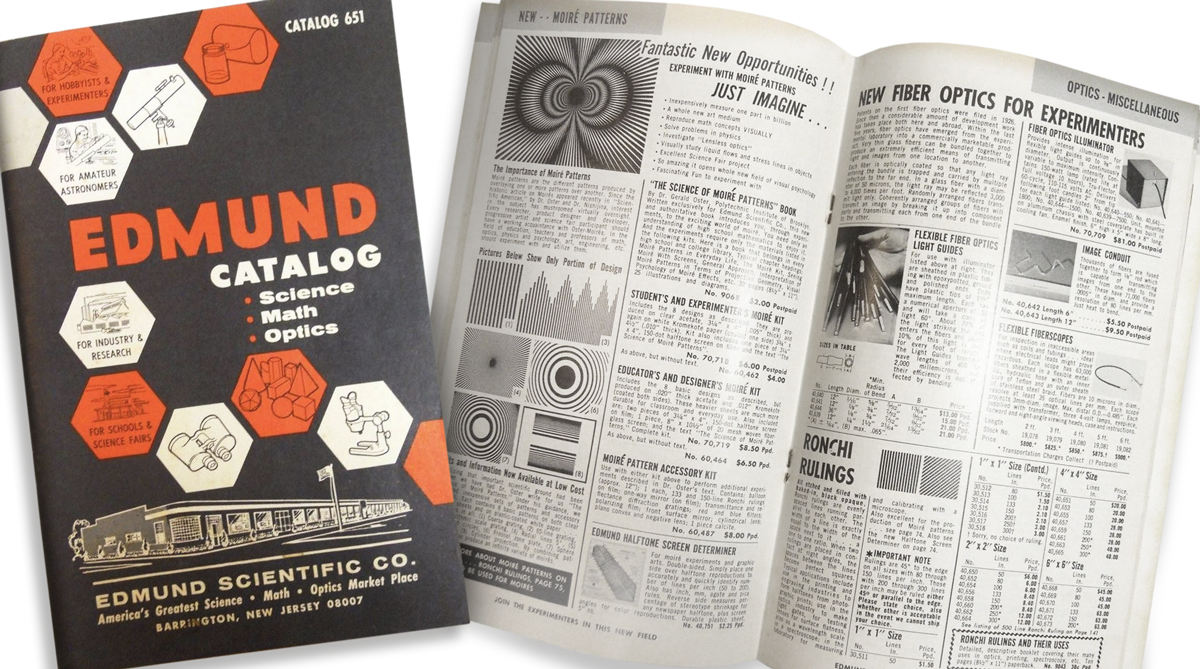 The 1965 Edmund Scientific Catalogue: Science, Math, Optics, it’s a sci-fi prop maker’s dream come true.
When putting our communicator moiré together we had the incredible help of HeroComm, who kindly loaned us an original 1965 “Educator’s and Designer’s Moiré Series (A)-Deluxe Kit”. The amazing resources on the HeroComm website helped us cut the moiré from exactly the right position from Pattern #4, but when it came to the tricorder, we had to work things out for ourselves. In order to replicate the moiré pattern as seen in all the known photos of the hero prop, a close-up of the studio photo from “The Making of Star Trek”book, corrected for perspective, was overdrawn with lines to pinpoint the centre of the pattern.

First square up a crop of the screencap moiré, then draw lines over it to find the pattern centre.
We knew that the moiré pattern was created from two discs cut from the same Edmund Scientific moiré sheet as the comm had been, but had been cut from a different part of the pattern. By overlaying our line drawings on Pattern #4, we were quickly able to see where to take the tricorder’s moiré discs from. 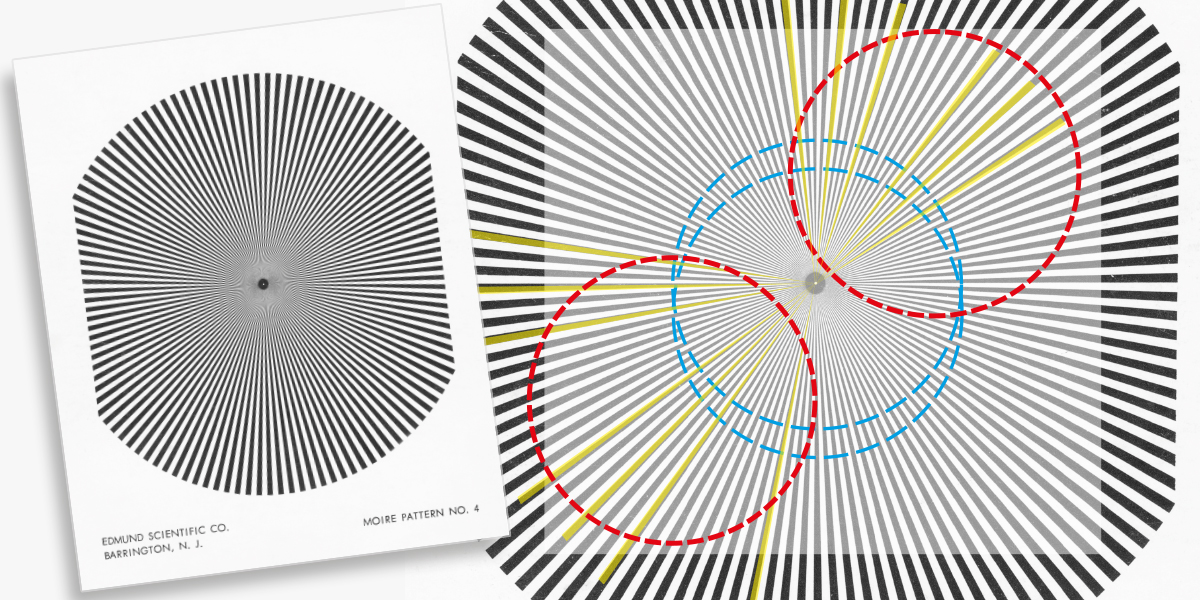 The original moiré was made by superimposing a transparent film of the pattern over a version of the pattern printed on white card. The blue circles show where the communicator’s moiré discs were cut from – the red circles show the position of the tricorder’s discs.
While the tricorder has a moiré disc similar to the communicator, given the lack of space for a communicator-style pocket-watch drive mechanism behind the tricorder prop’s front panel, it is clear that the tricorder’s moiré never actually rotated. Nevertheless, as the static pattern we see in the photographs is clearly made from two discs sitting on top of each other, it was never in question that our tricorder’s moiré should rotate to bring that pattern alive. With the two patterns overlaid and moving, the evolving fringes turn out to be very exciting and do have the look of strange magnetic flux lines, perhaps displaying some otherwise-unseen aspect of a subspace signal.

Early animation tests conducted early on in the project showed that the rotating moiré would deliver a fascinating pattern.
The stepper motor we chose to drive the tricorder’s moiré is much larger than the one we used for the communicator. Space inside the communicator is very limited: the moiré driving motor has to sit just under the moiré disc, on top of the speaker. Only the smallest stepper motor would fit. In the tricorder there is much more space behind the moiré panel which meant we could select a much bigger motor. The larger motor is actually less expensive and more robust, so it’s possible to connect directly to the moiré base disc, making it mechanically simpler and assembly easier.

The communicator’s stepper motor (on the left) is tiny compared with the monster that drives the tricorder’s moiré disc.
A stepper motor is needed because small DC motors function at high speed and as a result have to be heavily geared to achieve the low rotational speeds required to replicate the pocket-watch driven moiré motion seen in the communicator. The meshing of many tiny gears is a noisy business. The stepper motor is quieter and has the added benefit of accurate digital control of not just the speed, but also individual rotational steps. This provides another benefit for the tricorder’s function as a cabinet display piece.
In use, without additional mechanical complexity and moiré position sensors, it is not possible to know at which position the moiré has stopped. For the perfect display experience, the ideal situation would be for the moiré pattern to replicate the ‘X’ shape seen in the various images of the hero prop. With the stepper motor’s fine control, we are able to include a mode that will allow the user to manually adjust the rotation of the base disc to get the moiré pattern to look just right.

Although the orientation of the moiré’s cross pattern is not constant, the tricorder will have a mode that enables the user to manually adjust the pattern to replicate the pattern seen on images of the tricorder where the moiré is showing, for display purposes.
The further we pushed into the design of this hero prop, the more we got to realise the scientific thinking that underpinned the design choices Wah Chang made. Beyond expensive watered taffeta that gave these shimmering patterns their name, the moiré’s interference fringes are actually a highly scientific phenomena that have had a huge impact in many areas of technology and exploration. Moiré patterns have taken humans from the discovery that light travels in waves, when in 1801 Thomas Young inferred the wave half of the wave-particle duality by observing interference fringes created as beams of light shone through slits, all the way to the 21st century interferometry used by huge telescope arrays that peer deep into the most distant corners of the universe – further from our home planet than Kirk could have ever dreamed.
When different lines cross, interesting things happen.
LLAP
Chris

Coming next time
Little details – Things that matter to us

They really are putting all of the love into this thing, aren't they?

I live about 5 minutes from where Edmund Scientific were located. I used to make weekly trips there because the inventory changed almost every week. It truly was a propmaker's dream. Their back room that contained all their surplus was AMAZING. Whatever you were looking for...they probably had it. I got very excited one time when I walked in and saw they had probably 300 boxed tank periscopes (which is where we can find the scopes used on various Star Wars prop guns) I went through about 50 boxes...none had the telescopes.....just my luck!!! A friend worked for them doing artwork for their line called 'Scientifics' which were carded items containing something from that era. They sold some Army patches and the header card were a bunch of Germans fighting G.I.'s....I posed for those guys. --Ed

I gotta say this latest update just shows their level of commitment into the Tricorder! Their superb communications to Star Trek Fans in this venture is up and above from other companies. WOOt, Woot!!! Is an understatement keep it up TWC!! Come in Enterprise, Come in Enterprise....Spock here....L!

AnubisGuard said:
They really are putting all of the love into this thing, aren't they?
Click to expand...

Oh yeah. This thing is going to be epic.

Did TWC pull update #8 from their Facebook page? I went back to read comments and it’s not there anymore. I also never got update #8 in an email.

I got the TWC update #8 at 3:03AM. Romulans may have interfered with subspace communications in your sector.

enterprise0216 said:
I got the TWC update #8 at 3:03AM. Romulans may have interfered with subspace communications in your sector.
Click to expand...

First one that wasn’t waiting for me when I woke up.

RPF PREMIUM MEMBER
The level of care going into this is AMAZING, and just proves what fans all of the Wand Co. are of TOS Trek

More great info the detailing just rocks here some pics from the latest info release today. I may have missed picture.

I love how the data disks are secured in the shipping tray.
A

I know that when someone asked Chris a while back if the Tricorder was still on target for the summer he said it was not but didn't give a new time frame. Has anyone heard anything more on when it is likely to be released or if they have done full blown prototypes yet?

AJK001 said:
I know that when someone asked Chris a while back if the Tricorder was still on target for the summer he said it was not but didn't give a new time frame. Has anyone heard anything more on when it is likely to be released or if they have done full blown prototypes yet?
Click to expand...

TWC hasn’t said any more than that. The best thing to do would be to follow their Tricorder Blog. They do a good job responding to customer questions there.

With all the craziness happening globally there might be delays, but doesn't hurt to be hopeful. I am just digging all the photos, details and all the emails. I agree with JiminSTLouis just gotta follow their Tricorder Blog.