Can you share some better screens of the drifter outfit too? Kind regards

"Unpacking the Icons" (this was also added to the iTunes Extras a while ago):

OMG, these screenshots have answered so many questions I had while building this suit for this Halloween.... THANK YOU!

So back to boot discussion, if I can't find the exact pair, what do you guys recommend ?

Sam Williams shared some great details and renders of the wrist communicator on Instagram:

Section said:
So back to boot discussion, if I can't find the exact pair, what do you guys recommend ?
Click to expand...

I'm not going for exact screen accuracies, only just as good as I can. I found these HD 9103 boots on Ebay for $30. They make me 2" taller and they look the part well with the gaitors on. ( I cut the buckle strap off) I went with these as the scenes where they show his boots up close seemed like they had a bit of a heel. (walking towards penguins car, for example) so this worked for me. Just an option of all else fails.

Does any one know where I can get custom made gloves or someone who can modify gloves, I’m trying to make The Batman gloves as accurate as possible.

Wonderful little find I got here…seems they modified it with a belt clip, a central casing to cover some of the texture, and six end pieces around the circumference.

cloninaround said:
Wonderful little find I got here…seems they modified it with a belt clip, a central casing to cover some of the texture, and six end pieces around the circumference.

I thought that the flashlight had already been identified as the slightly longer Coast HP14 version?

I stand corrected! Thanks

Some concept art of Batman's gadgets and the Bat-Signal from Mark Button's website (also posted on ArtStation a whole three weeks ago):

He also shared some of them on his Instagram without the text covering up part of the art in the bottom left corner, but cropped:

And Rut Villamagna also shared some stuff on her Instagram:

More flashlight details/questions. I've found about a dozen similar (but not the same) "Tandy" black metal belt clips that could be used. Wondering what everyone's take is on the slotted sectioned ring(?) is on the front of the flashlight lens, but obviously is not present on the Coast HP-14 (or other flashlights I've searched on.) Could be something from a rifle scope?

The belt-clip, section underneath the belt clip that looks like a messy add-on here, and this sectioned "ring" on the lens could all just be from a junkyard collection But that six-sectioned slotted ring somehow looks super familiar to me.
Anyone with some source ideas on these pieces?

The clip on the flashlight was identified as a bit of a generic design available from different brands, but this particular one on Amazon.co.uk seems like a good candidate for the specific one they used:

You can see that the Fidlock is flipped over in this set picture, showing the back of the aluminium Hook 25 with the Fidlock logo, "patented", and lot number on it, which the plastic version lacks:

And in this picture of the costume you can see the thinner "bar" of the aluminium version (between the strap on the left and the "PULL" text):

Unfortunately, the only way you seem to be able to get the aluminium Hook 25 is by finding one of the helmets that used them for the chinstrap. Also, the version of the aluminium Hook currently pictured on Fidlock's website is a slightly different design than the one used in the movie (which is why I said it's not the aluminium version in a previous post), so they may have updated it since the movie's production:

However, if you do get that incorrect version of the aluminium Hook 25, it seems like you can just take the "PULL" piece off a plastic version (which is identical to the one on the correct aluminum version) and put it on the aluminum plate of the newer "alu motorbike" version to make it accurate to the correct Hook used on the suit.
Last edited: Jul 8, 2022

Working with this clip for the flashlight. Have not added the underlayment, drilled the holes for the clip or changed the coloration on the flashlight yet, obviously.

Okay some new observations that may have already been covered, but I've stepped through every page to check and didn't see this covered. First off - the actual utility belt. In earlier posts it was identified as being made up of sections of possibly two slightly differently embossed belts. This is as may be. Personally, I don't think the basketweave pattern is that noticeably different from one cut section over another, but - if you're going for supreme accuracy, sure.

Then a few options for available starting point duty belts were shared. But there are issues with some of these.
First off, a lot of people (me included) went for one of the Rocotactical or similar belts. Here's the problem. I started trying to soften my belt today pre-weathering and noticed that there is a wrapped banded edging on the top and bottom, presumably to give patrolmen a clean, finished look to their belts. This is present on many (not all) new duty belts online. 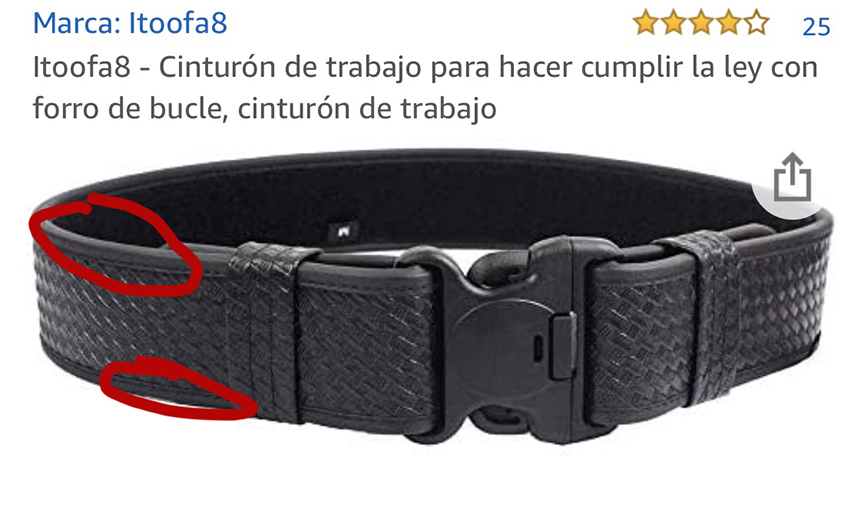 However, this banding is a vinyl or thinner separate wrap. And the screen belt does not have this wrap. It has stitched raw leather to the edges, but with a stitched seam about .25" in from the edges. You can see that from the worn edges here. 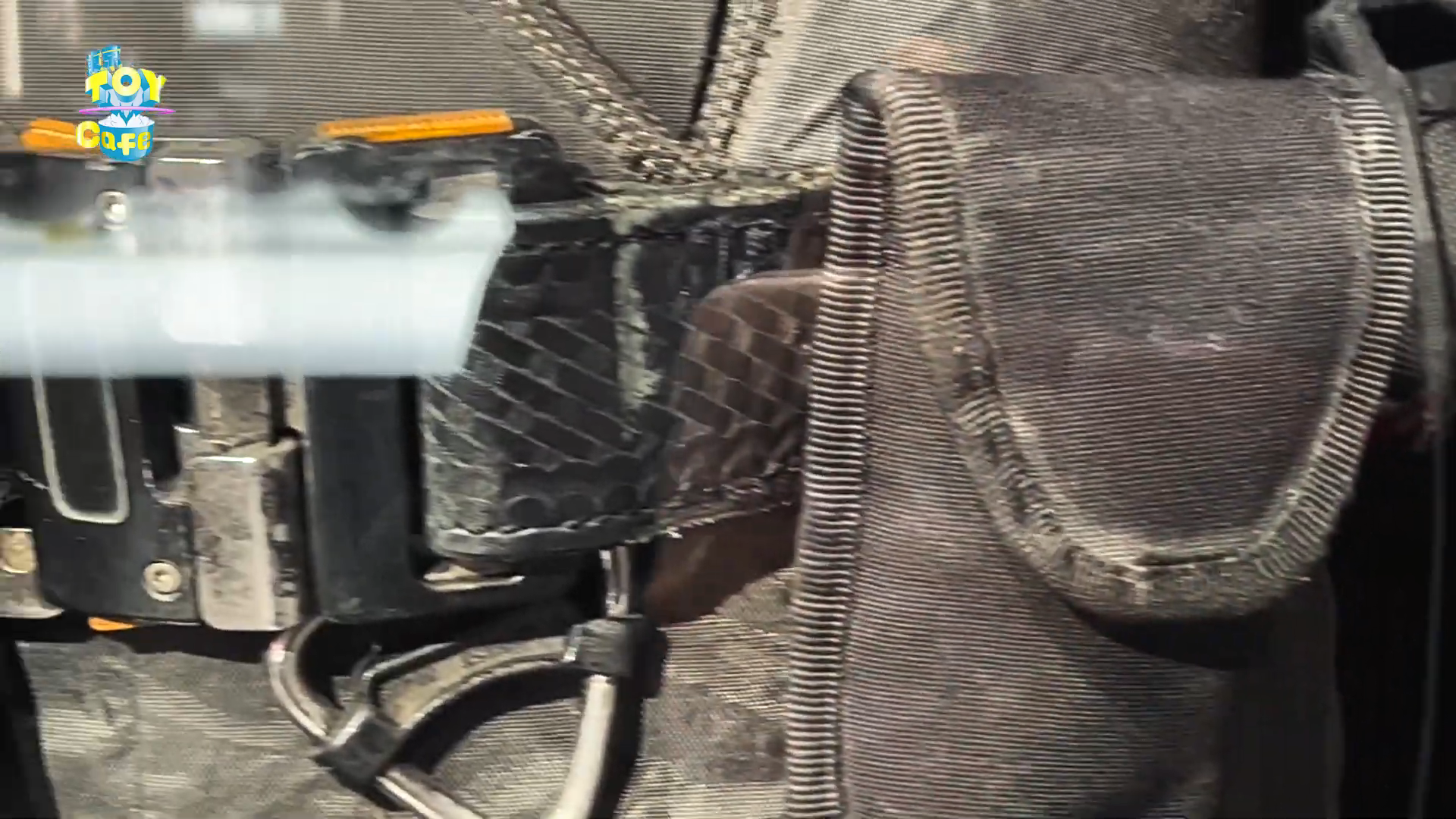 The way the belts on some of the the premiere location tour mannequins are adjusted (and not saying they're the same build as the screen belts), and in this tabletop collection, you can see the cut/joined belt pieces because they didn't slide the double mag pouch over top of the join to hide it, like it is in the film: 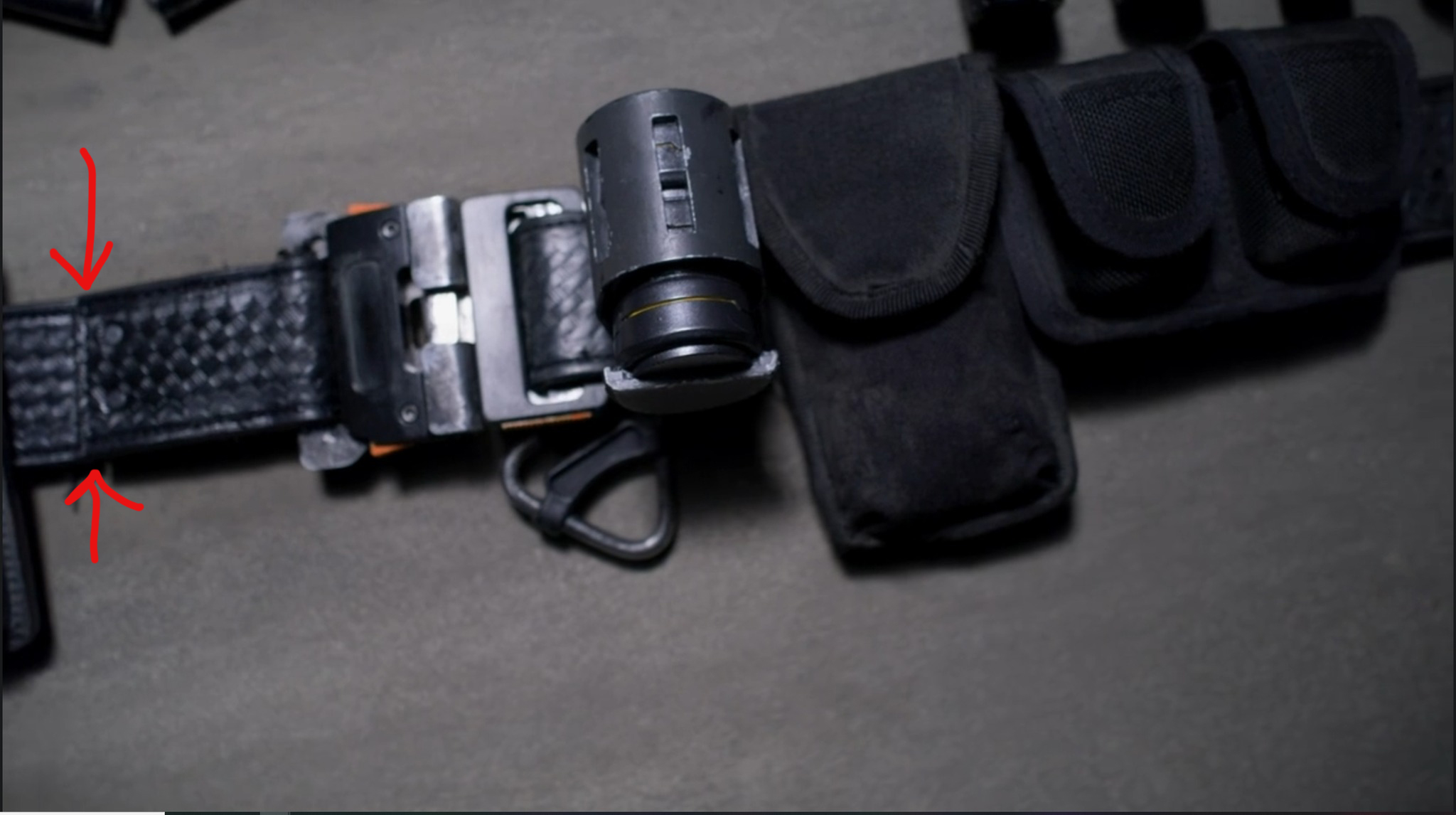 The other belt section join, as has been identified here in an earlier post, is very close to the sticky bomb cannister and is usually hidden by it. Both of these joined pieces look like they're being connected by black webbing on the inside, whether elastic or not is a guess at this point. 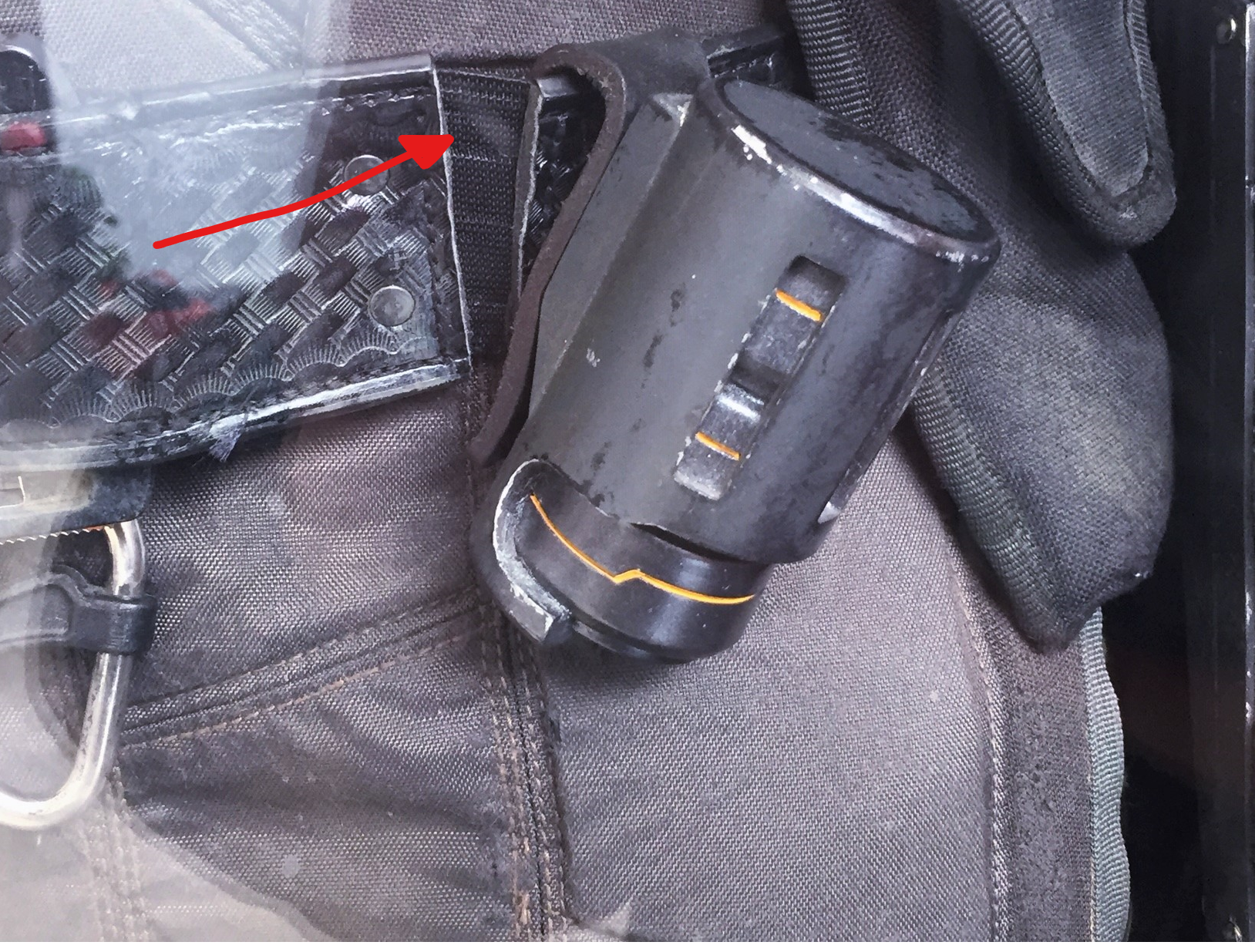 I'm guessing that the reason the belt is pieced together from more than one is because if you started out with say, a 40" Bianchi or Aker that does NOT have the "taped" edges, then you might be using a traditional belt that has spaced prong holes for sizing, or specialized ends - so you'd have to cut off between 6-8" of leather with holes unless you wanted to see the holes or use a pronged buckle assembly, which we can assume they did not. 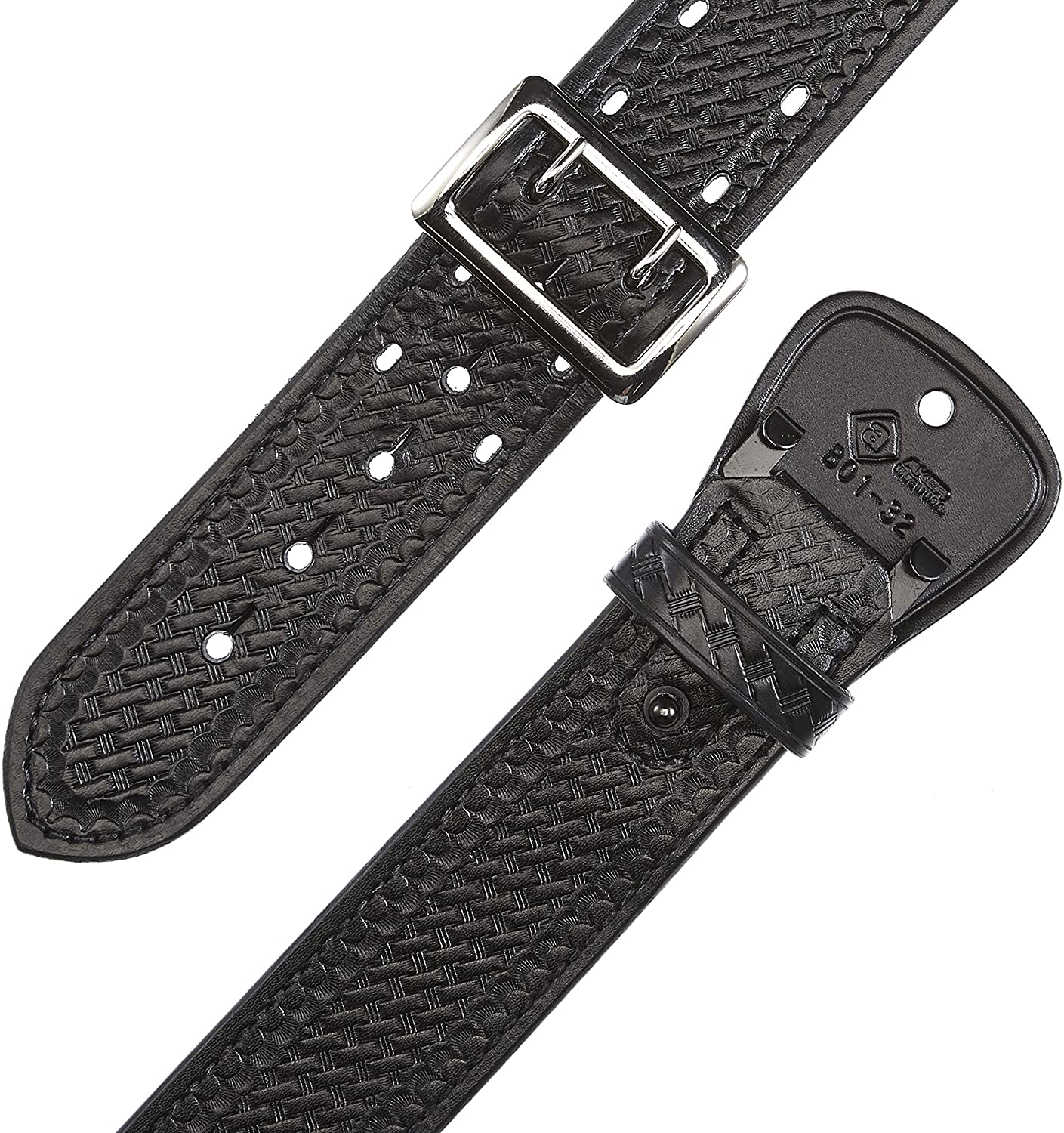 More - The "baton holder ring" is really a "D-Cell Flashlight holder". His UV rod and other narrow baton-based gadget are stored in the two tubular pouches in the back. So where does he pull the Coast HP-14 from? Again, this is my speculation - I'll bet that originally the intention was to have the modified Coast flashlight stored in the ring. This, along with the pull from the thigh holster clip, would pull and weigh down the belt. Thus- the reason for the German WWII belt support clip as well as the multiple sets of male snaps on the belt, helping to fix the belt flat and stable to the flight suit, which (as has also been revealed earlier in this thread) have corresponding female snaps in the same place.
(Green are female snap locations, purple is the German belt hook 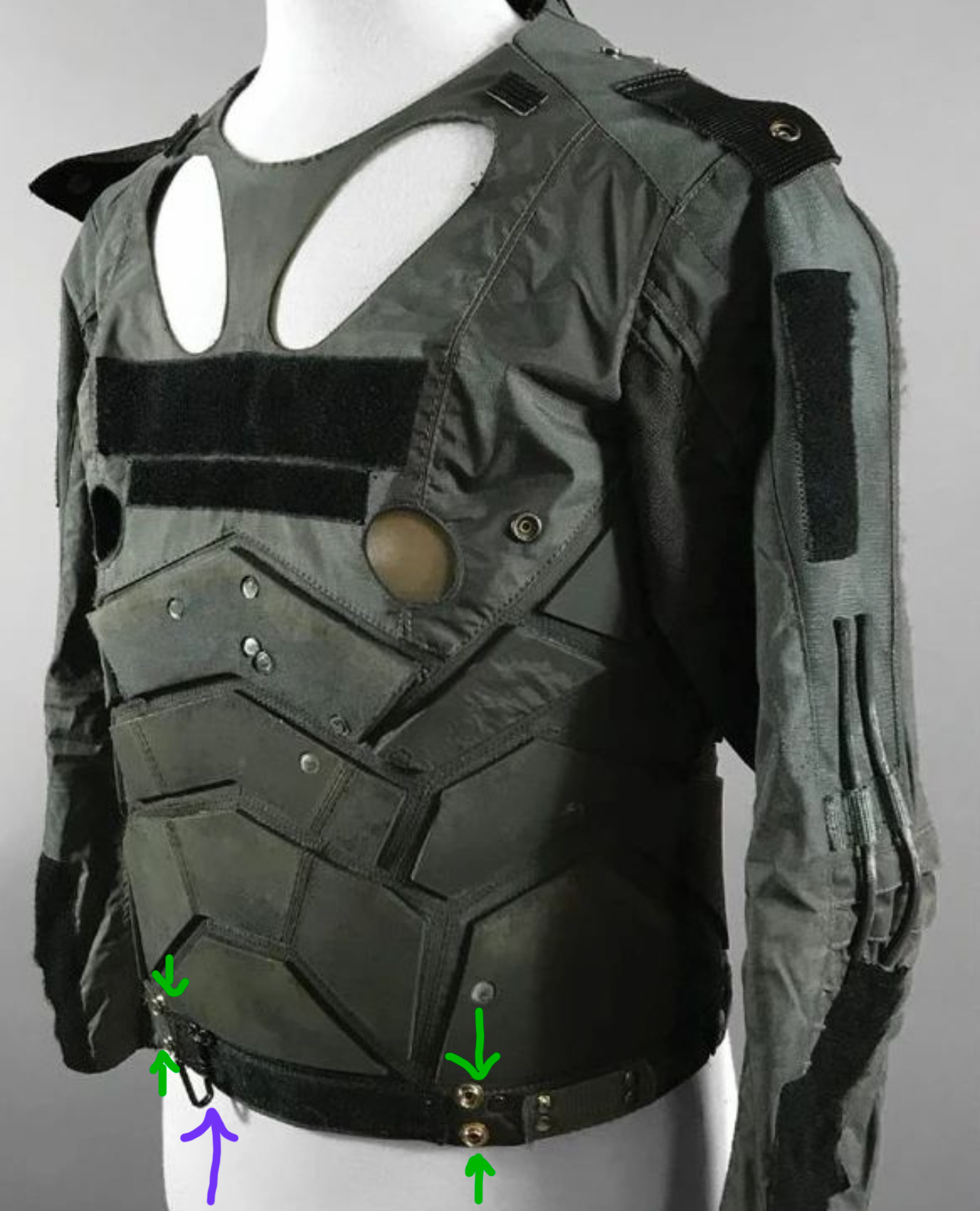 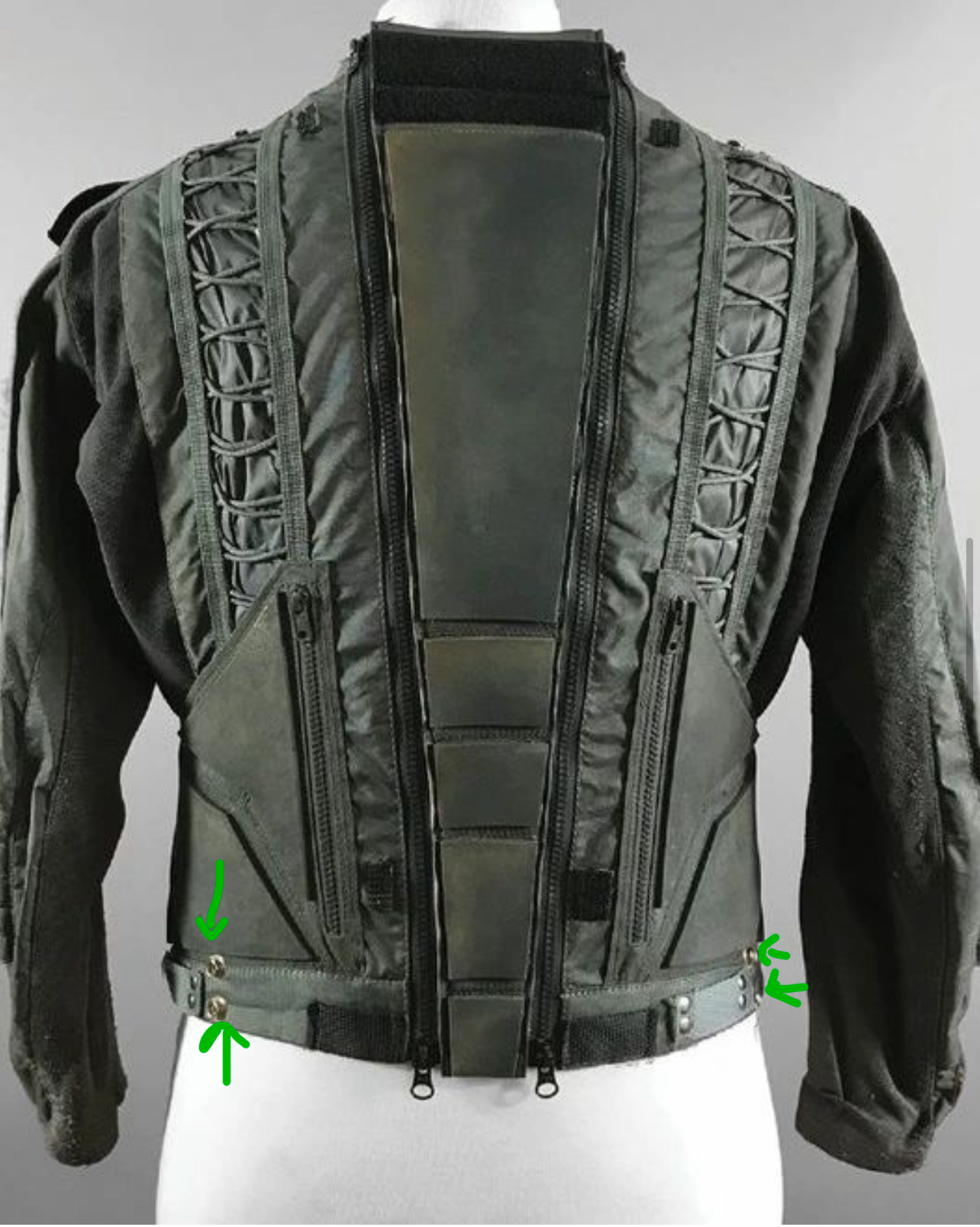 One last observation about the belt. While the thigh holster uses the clip closures, the belt does not seem to. If you look at the right side of the flattened belt here, you'll see it only features a black simple slide buckle. No prongs, no clips. Which is curious, because it would seem to need a lot more corresponding belt material on the other end to actually fasten and be able to be tightened than we've seen on that other side of the belt so far. (red marks are joined section breaks, green are the male snap locations). The purple is where the WWII belt loop holder would land, based on tunic images. It may not have been used in the end, because if they had dangled the heavy Coast flashlight there in the ring where it's positioned, it would be an extremely awkward location for it. I'm guessing they abandoned it. Think about it, no matter what went in that ring holder, it's too far toward the buckle center of the belt and anything carried there would be constantly swinging into his groin. That ring should be placed more on the back or sides, but they probably liked how it broke up the assortment in the front. Result - never show the device it's supposed to hold being held there.

Loads of this is speculative obviously. Just working out some logistics. the big takeaway here is - whether you intend to cut a duty belt up to get some flex in it or not - if you want the correct weathered look, don't get a belt that has taped edges. And if you want one screen accurate, lose the clip closures when you get one.

There are several basket weave, leather 2.25" duty belts out there with stitched untaped edges. But most of them have pronged buckles, which means you'd need to buy two and connect them like the screen-used belt. This one features a very similar weave pattern to the movie belt - and no buckles - so you'd have to also get a slide buckle for it, or go the route of clip-locks even if they're not screen/prop accurate:

Update to the belt thread above. After talking with Michael from Bat and Cat Cosplay, there are some new pieces of info I wanted to correct and share:

cloninaround said:
Wonderful little find I got here…seems they modified it with a belt clip, a central casing to cover some of the texture, and six end pieces around the circumference.

It looks like the band around the front of the flashlight is a section of screwdriver-tightened hose clamp (the slotted band).

I wonder if it was a wide clamp on both sides and the just trimmed down one side? I'll keep my eyes out in case I see anything that fits the bill.

B
The Riddler Diary Pages Help