What you show in your pics of the MF is exactly the look I'm going for. Thanks!

No problem! Hope it works for you!

i've been looking at model kits for making this kitbash, and I'm a little worried I'm looking at the wrong thing. I see this kit pop up all the time: But it says it's a Flak 38, and according to an earlier post that's not going to have the parts I need. Should I be looking for this one instead? 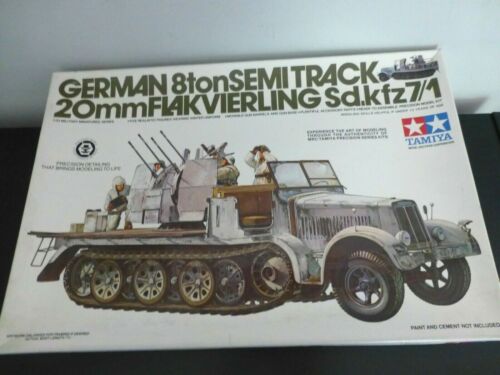 Between those two, those are the only "Tamiya 1:48 Flakvierling" kits I can find.

Those two are the exact same gun, it's just mounted on a half track in the second kit.
Are you looking for the flak 38 ah 51?

Yeah, I figured as much, but I didn't see any other options on eBay. I'm looking for the 1977 Tamiya MM191 20mm Flakvierling.

The first kit is the one you are looking for. All the parts that you need are in that kit. A few of the parts are turned upside down so look carefully at all the parts before you use them. If you need help let me know. I've built two Centaurs. Still have the left over parts from the last 20mm Flakvierling 38.

So, I'm kindov going the opposite direction here with this ship, and as opposed to all you great people recreating the ship better than it use to was in real plastic... I'm trying to convert it to CG in Blender.

The original has lots of paint on it: 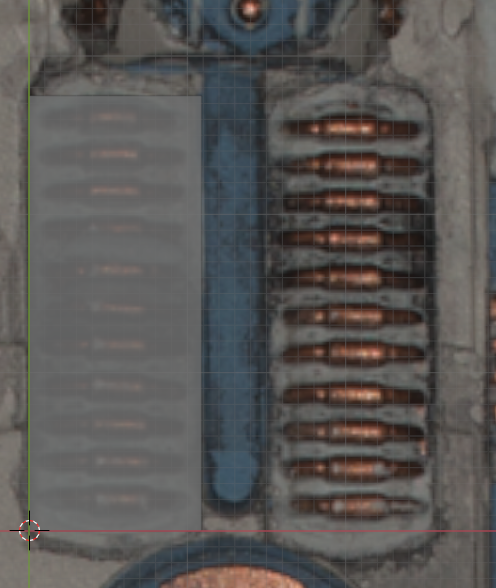 Are these hard cylinders?

Does anyone have a photo of the unpainted Maquis Grills?

Little Angel said:
So, I'm kindov going the opposite direction here with this ship, and as opposed to all you great people recreating the ship better than it use to was in real plastic... I'm trying to convert it to CG in Blender.

The original has lots of paint on it:
View attachment 1359117

Are these hard cylinders?

Does anyone have a photo of the unpainted Maquis Grills?
Click to expand...

I'll get my macro lens out and take some pictures of the unpainted part.

The cylinder things are a little soft, but it's probably more by accident than design.

Hiya - I looked back in the history of the thread and found Section 31 's photos:

These helped a lot.

I feel that one of the main issues I'm finding is that the manufacturing of detail at this level is just plainly poor and items just don't line up. What I was seeing on my model as over thick paint was just lack of detail in the underlying model.

In certain cases the edge details don't even line up: 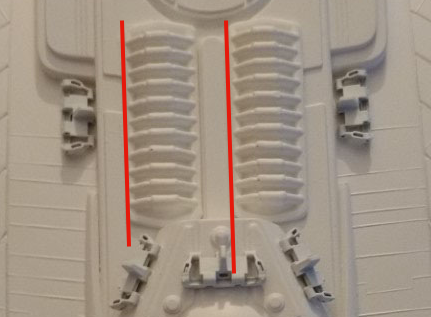 I tried finding a justification or pattern to these... but I couldn't, so I'm just going with an average set of values.

Now, I know this is anathema to practical props and models, this is what I've come up with: 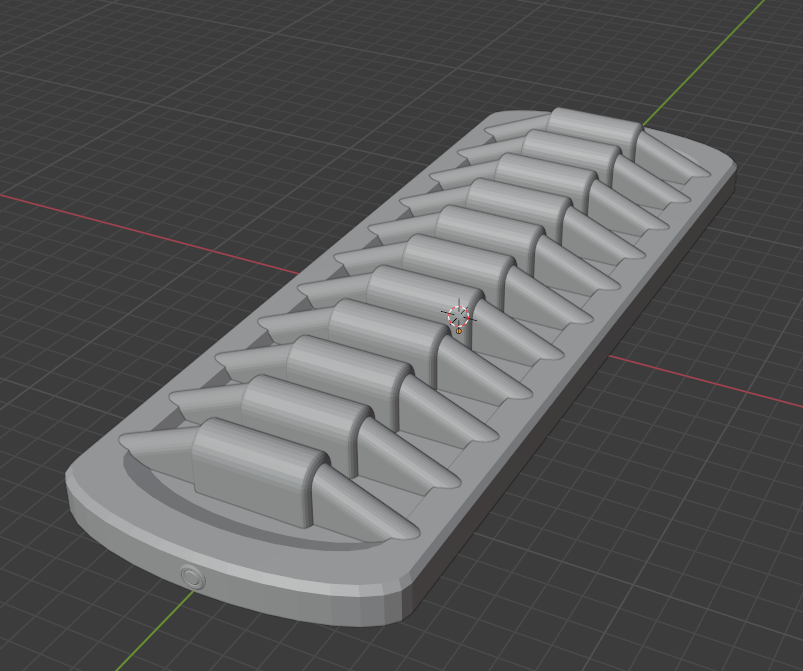 We'll see how far I get.

I found your photos last night, and they were invaluable.

They do have more detail than I can get off my model: 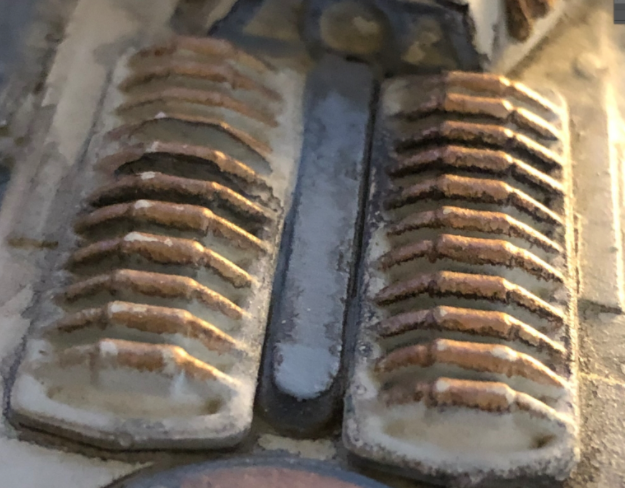 I did decide, tho', to use that small round manufacturing detail at the end of the grill piece as a maintenance airlock!

Here you go - I've attached some macro shots of the parts. Don't forget that there's another Marquis Raider grill on the underside of the saucer (it's the smaller one in the pics). Hope these help you in your quest.

I printed the decals for my Centaur the other day. My big hold up on my build was trying to find paint colours that I like, I think I've settled on some Mr Hobby light grey and Vallejo Air for the pastel blues and greens, they're all military colours and it was hard to find something with the right saturation. Many of the 'off the shelf' hobby paint options in the UK are too dark and too saturated and I've had to buy a lot of paint online just to find out what works. My build is going to have a more muted, typically Starfleet canon look.

What I missed on my model was the raised core.

I see that now that I see yours.

Between the paint and my eyesight, I missed that. 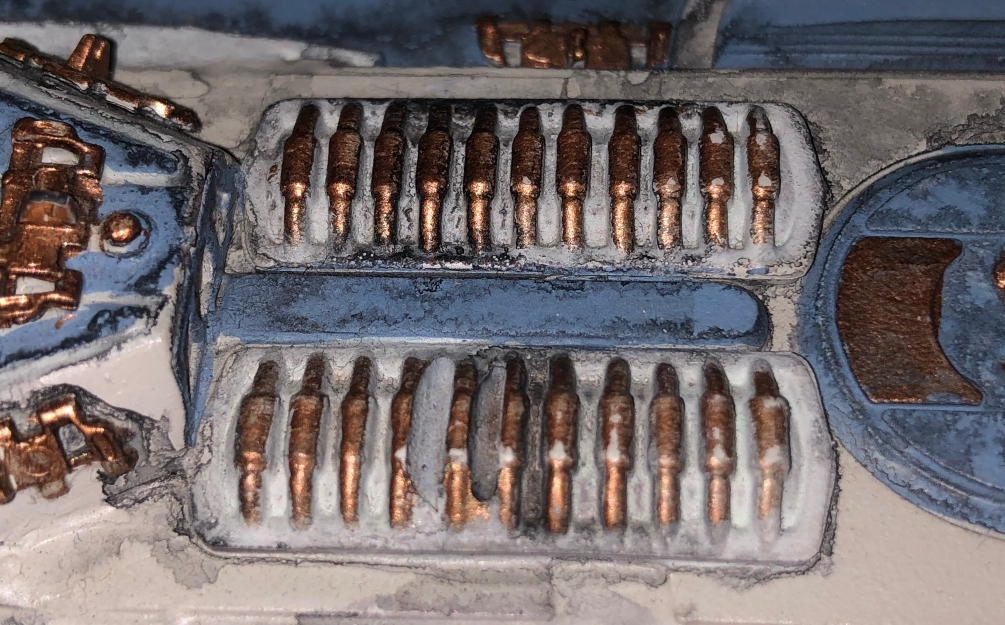 The Port Grill shows two manufacturing errors that I'd not noticed either until I shot these...

The port side grille might not have been fully formed when molded, or something could have happened during the build that affected the part. I guess it's 'battle damage'.

I've tried to keep my build faithful but have smoothed over some imperfections and tried to correct asymmetry. The biggest aesthetic choice is whether to leave the shuttle bay shroud on the saucer hollow, or to fill it in. I think it looks a lot nicer filled in, so that's what I did with mine despite it not being screen accurate.

Another oddity is the nacelle alignment as the saucer and secondary hull have a slightly downward trajectory on my physical model and I think the studio model as well, it's just the way the parts go together. I tried to compensate by angling the nacelles slightly up at the back and also to account for the sagging over time.

Yeah - My feeling was to do one model as correct to the physical model as possible, and then, after that, correct it.

One change I will investigate is raising up the bridge until it meets the shuttle bay better.

Thanks again for the pics.

I'll let you know how I get on. 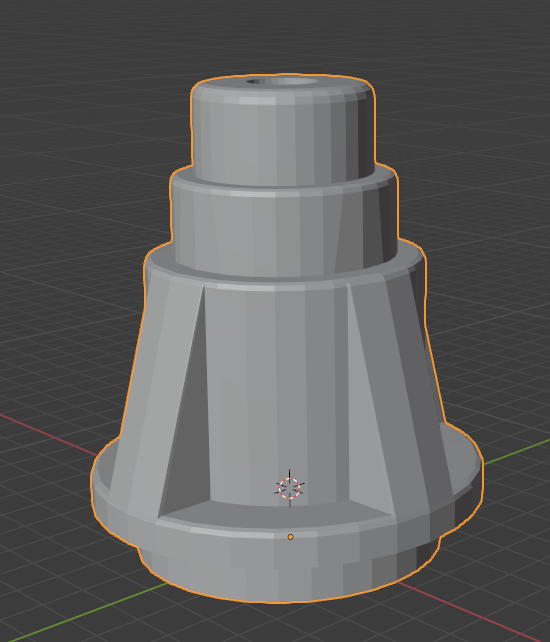 So many more to go.

They'd be so much quicker if I was not trying to be as accurate as possible.
Last edited: Oct 18, 2020

Little Angel said:
Yeah - My feeling was to do one model as correct to the physical model as possible, and then, after that, correct it.

One change I will investigate is raising up the bridge until it meets the shuttle bay better.

Thanks again for the pics.

I'll let you know how I get on.
Click to expand...

It would be really nice to see a GC one that isn't based on the Eaglemoss collectable model.

I agree, I would like to see a CG model of the Centaur that isn't of the Eaglemoss model.

I'm a bit sad about all of the confusion and misinformation that came from the SF Technical Manual that lead to the misunderstanding about the scale and detail of the ship.

To be honest, we were making ships that were intended for deep background in shot and no one was supposed to analyze them.

This is very similar to what was done in Star Wars where they made cheap kit bashes to fill in the background, and in some/many cases actually bashing a ship, photographing it and then re-photographing the still rather than the ship!

For some amusing insight into this you can have a look at EC Henry's Channel on YouTube: 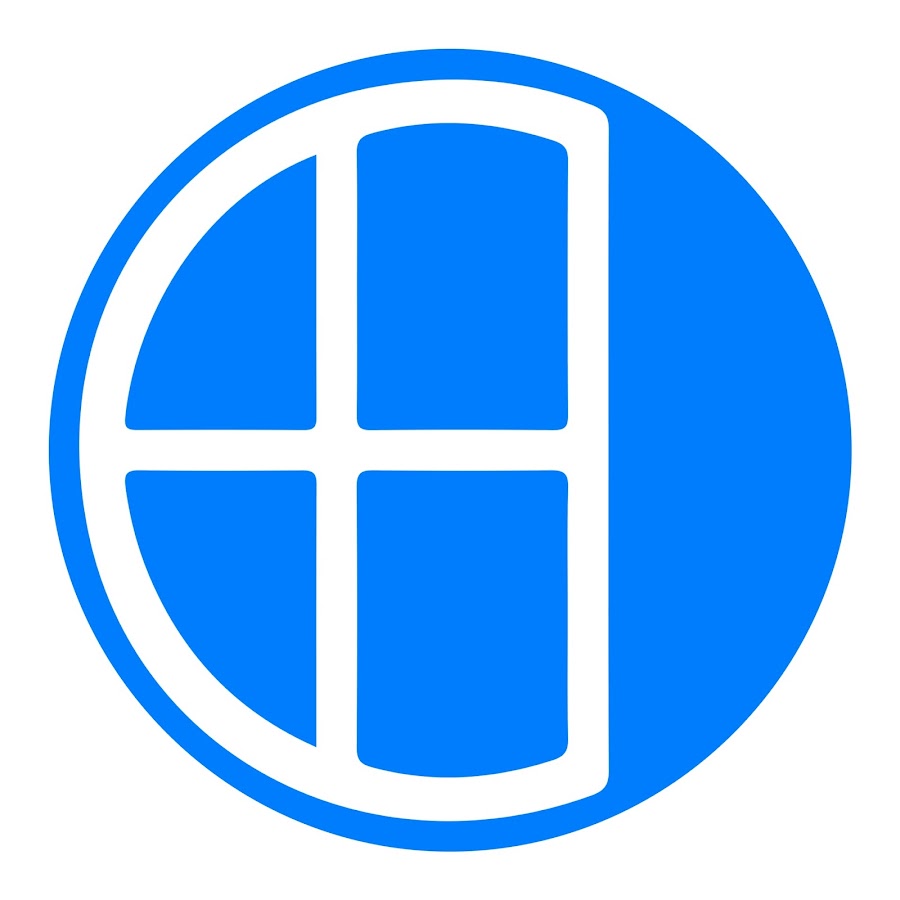 For example this one about deep BG ships:

On the other hand, if they'd asked us what our feelings were about the ships, or even owned up to the fact that they'd [snuck into the model shop unattended and] seen the ships and made up their own minds, then we could have had the chance to fix at least the error about the Centaur.

The Eagle Moss miniature and the Star Trek video game ship is based on the Encyclopedia or Tech Manual (whichever book that was...). 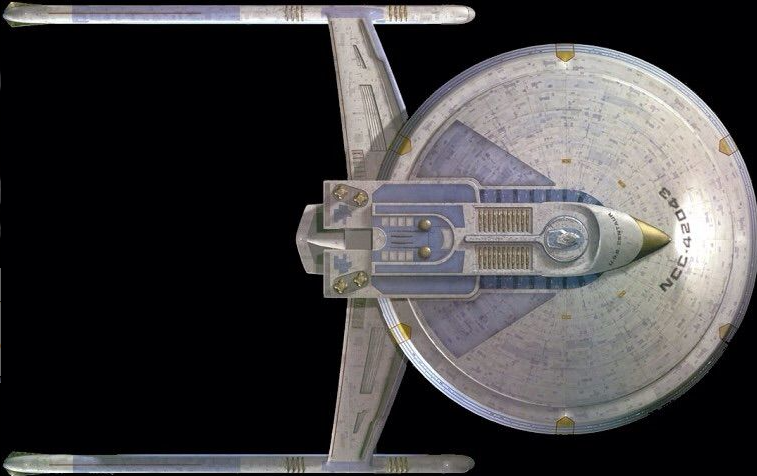 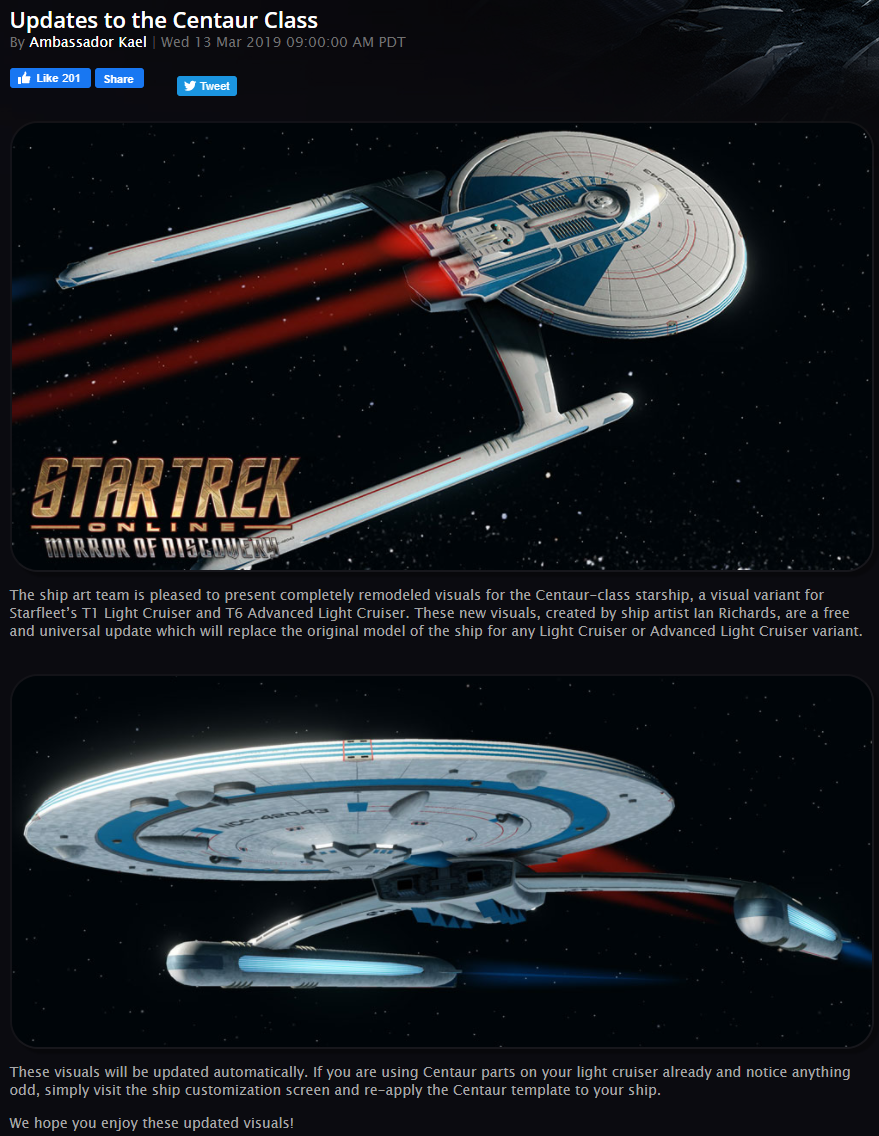 What annoys me the most about the Eagle Moss article was that they'd contacted me for photos and an interview after they'd actioned the miniature. If we had hooked up before hand, then there may have been a chance at making an accurate collectible.

So, speaking of accuracy...

Does anyone have any good images of the tank tracks before they've been glued on?

I'm struggling with the profile.

The face is fairly obvious, but the tracks are not flat and had tags facing "downwards". I may have removed them on some but I definitely kept them on others.

I can guess and make a good stab at it, but if anyone has some lying around, I'd love an image.

This is what I have so far: 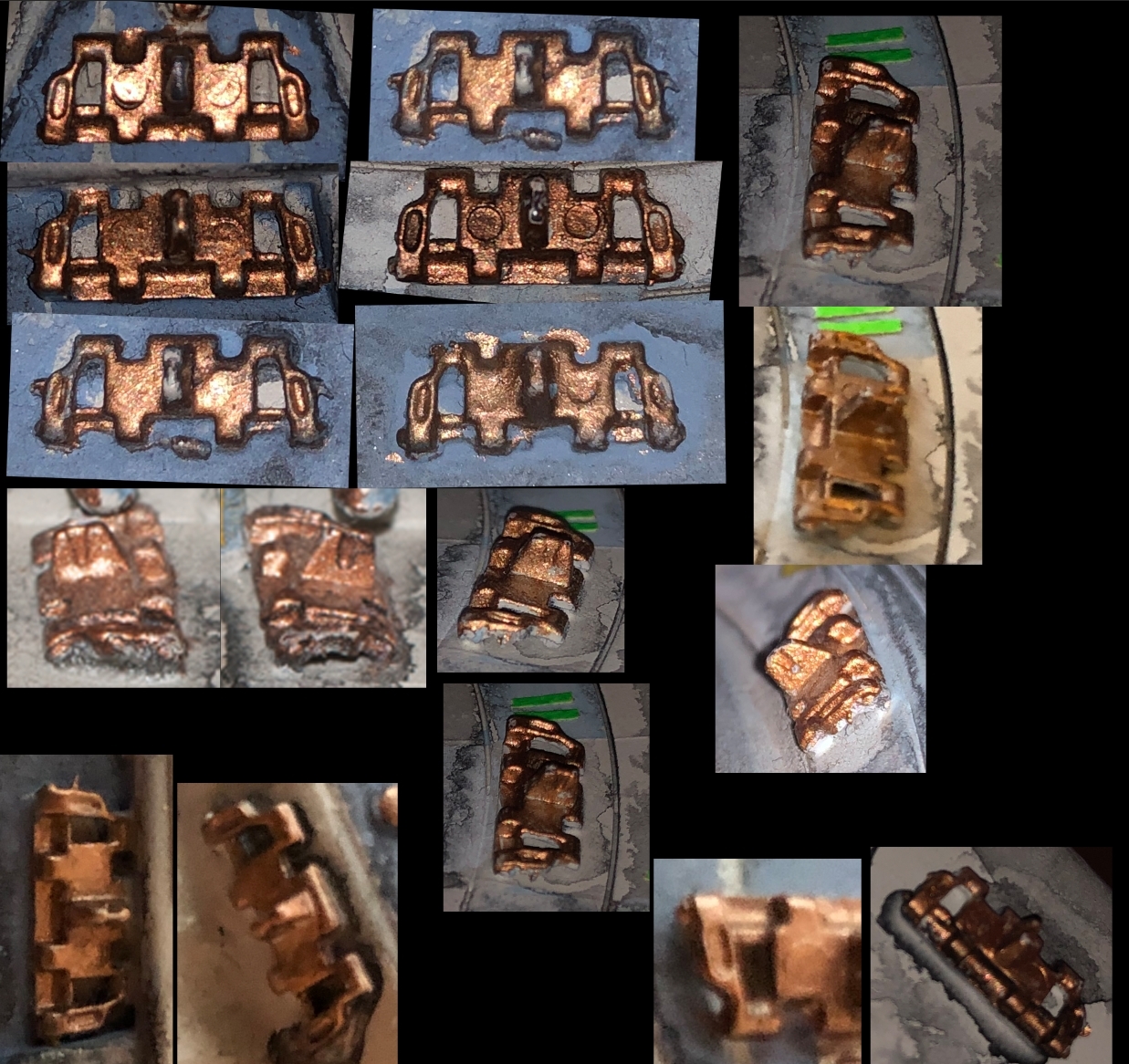 ... but as you can see, I'm having a hard time getting a good look at the side profile and back side.