Ceebrupt said:
I think the graphics might be more difficult to find since most of them seem tailored to Indy so I think they might be custom or from clipart archives or something. But most of the articles (apart from the tomb) might indeed be from newspapers around that date. For example here's another article from August 16 about the Italo-Ethiopian war, similar to the article in the insert :
View attachment 1537439 View attachment 1537443 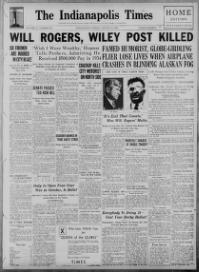 I'm still not sure whether they actually used this newspaper and changed the wording (on top of the dates), or they used another newspaper that had more similar wording but that isn't on the website.
Click to expand...

It is probably an article written using the same sources, but by a different reporter. With those two articles you found in the first post, we only have to find two (actually probably only one) articles more, partially hidden by the photo. Seems to be about politicians, maybe about some particular economic crisis or something similar. The most difficult part will be to guess the actual headlines, and the author names.

This is fun. Thanks for the provided sources.

The german manual has more pages. If you want it, drop me your email and I send it to you Oxley.

RPF PREMIUM MEMBER
Okay so these are (I think) the articles they used, almost all of them (apart from the last one) from the August 16 Brooklyn Times-Union. It's funny that the insert newspaper is dated Wednesday 20 February, but the weather forecast already mentions Saturday haha, which makes sense for the actual newspaper of Friday 16 August but not the changed date.

This is not related to the manual itself, but the videogame, and I though it's a neat detail.

In the game's intro, starting the Ceylon chapter, Indy examines an old map.

Well, this map was also identified in the old thread! Is this particular one from 1579:

Here you have some links to digital versions of the map here and here.

Taking a look at the german manual Brigandia sent me, I noticed that indeed it has pages that the regular manual doesn't. Doing a bit of reseach I found out that the version of the game for each system has its own manual, with slight modifications (it sounds obvious, but I didnt think about it until now XD).

These are the new pages I found. There are other changes to existing pages, but they dont really anything new to the table.

It's curious how the german version of the excavation worksheet has more info than its english counterpart. That info seems to be in-universe (I don't really know german, so I can't be sure XD) , so I don't see the reason why it was removed in the english one.

Also the health board notice has the same caduceus as the doctor's logo from page 14-15. Which means that it could actually be clipart.

This is not related to the manual itself, but the videogame

Being a circle, and in that context, the first thing that reminds me of is the chinese zodiac, or the lunar calendar.

EDIT: It's funny how that book, that is presumably ancient, or at most from the 30s, has a photo of Xi'an's terracotta army, when it was actually discovered in 1974. A book from the future, that sure is a discovery!
Last edited: Jan 24, 2022

It is a Riggs National Bank check

Oxley said:
This is not related to the manual itself, but the videogame, and I though it's a neat detail.

In the game's intro, starting the Ceylon chapter, Indy examines an old map.

Well, this map was also identified in the old thread! Is this particular one from 1579:

Here you have some links to digital versions of the map here and here.
Click to expand...

It's not amazing, but here you have a quick cleanup of the Ceylon map

Here you have my take on the Zeppelin envelope's stamps, with a little update on the red one.

Alright, I bough the matchbook of the Medinah Club (the source behind the Club Swank logo), and it already arrived! I made a scan of it, this particular design seems kind of rare, and would be nice to have it digitally preserved.

This also allowed me to make a hi-res version of the Swank logo! So here you have my attempt on it.

Alright, I made some discoveries with the Qin Shi Huang book that appears in the game.

The first page clearly has a photo of Xi'an's Terracotta Army, edited to look like if it was a drawing. I don't know which exact photo yet, but I would bet they took it from a stock photo archive.
The text is the same through the book, and seems to be a looping texture of the same chinese script. I tried to edit it, so it is easier to see, but no search engine has given me the actual source.

However, I did manage to identify the graphics on the phantom page that clips through this first one.

Its an illustration of the "Sushou Star Chart" stone carving. I tried using an image translator on the edited script texture from above, and it managed to translate some words as "calendar" and "time", which could mean that both the text and the chart are part of the same page, probably from a book explaining the carving.

Here you have a very high resolution version of the actual carving.

The second page is actually part of the game's concept art. That same image can be seen in the game as a collectible, under the name "Black Pagoda":

I haven't found a hi res version of this particular artwork yet. The game is very old at this point, and there is not that much info about it nowadays.

Finally, the third set of pages has an actual illustration of the first Emperor of China, Quin Shi Huang, a main character of the game's plot.

I'm pretty sure this is the illustration used on the book, but with a new paint job. Or a variation of it, at least.

Finally, researching about the game I found out that assets used on the manual were repurposed ingame at flair decor for the chapter selection screen. Because of that, we actually have a full view of the Ceylon themed illustrations from the manual:

RPF PREMIUM MEMBER
Here are the texture files of the journal if useful, and of another book as well