I'm certainly not the best person to kick this off, since there are far more knowledgable X-Wing experts (X-perts?) amongst us.

But since it was suggested earlier that this may be a fun topic to delve into, and since no one has kicked it off yet, so be it...

It was mentioned in the other thread (and has been known by most for some time now) that the Red 4 in the infamous ILM archives shot with GL is in fact Red 5, with the fifth stripe painted over.

A good point was brought up - that there are ROTJ props in that shot, so it may stand to reason that the model survived past the ROTJ production.

I don't suppose this model was used in Star Tours, was it? Any way to confirm (as that would place its integrity in place at least up to '86 or '87).

CessnaDriver said:
Somebody must have known it was special to include it so prominately next to Lucas.

Then they destroy it?

DarkKnight said:
I betcha the destroyed Red 5 is a stunt double, and the hero model is in Lucas office or bedroom
Click to expand...

Used to be stories floating around that it was stolen.
M

Okay, well I don't know and can't tell about the Red 5 in this Lucas photo, but I can absolutely, 1000%, don't even think about it for another instant, confirm that the busted Red 5 wings in the Archives are the same ones seen on the Red 5 paint reference photos I have. Right down to the tiniest little detail - on extremely high-res images - there's just absolutely no question they're the same.

Now, what I don't know is whether there was more than one Red 5 or not.

RPF PREMIUM MEMBER
A good friend of mine who worked at ILM for years told me that one of them was given to The son of a Shiek who hosted George and his family at the palace of some un-named country. (He told me which, I just cant remember, Saudi I think)

Im not sure if any of the XWINGS ended up in the Van Nuys storage unit that lapsed it's rent, and the contents confiscated. That was the initial source of the DEATH STAR ending up in a land fill in where was it? Nebraska?


POST EP4 most of the props were treated poorly. You can tell by the condition they are in.


I have seen many a picture taken at the archives and noticed the same thing that I have been told by folks who work at ILM.

The only thing more amazing at HOW Much is there, is how much is NOT, (ie whats been lost)
Last edited: Jan 5, 2009

RPF PREMIUM MEMBER
Other than Red 2, have any other ANH X-Wings made their way to one of the museum exhibitions? I wonder if Red 5's fuselage might be alive and well (wishful thinking here), but part of another X-Wing now. Swapped perhaps during the Star Tours shoot?

So which one is pictured below (forgive horrifically bad picture - taken before I had a decent DSLR). Taken in 2007 as part of Where Science Meets Imagination Tour:

There was an X-wing model stolen from ILM during the production of ANH. It was always suspected to be an inside job, but it never showed up despite all sorts of pleas and threats from management. I had initially thought that it was Red 5, but was later told that it was just an X-wing. The reason it was a big deal at the time was that it was one of the MOCO miniatures (not a pyro), and they couldn't be quickly replaced.

RPF PREMIUM MEMBER
Did it ever get filmed and screen time?

WTF is a MOCO miniature?

Not to belabor the point, but I think it's important to be sure, and grateful, that at least part of Red 5 truly exists.

Here is a comparison between the paint ref's I have from '76, shots taken recently at the Archives, and a quick screencap from ANH. Although these are crops of just one engine, all the wing details line up feature-for-feature, with a few extra dirty marks here and there as they are today. 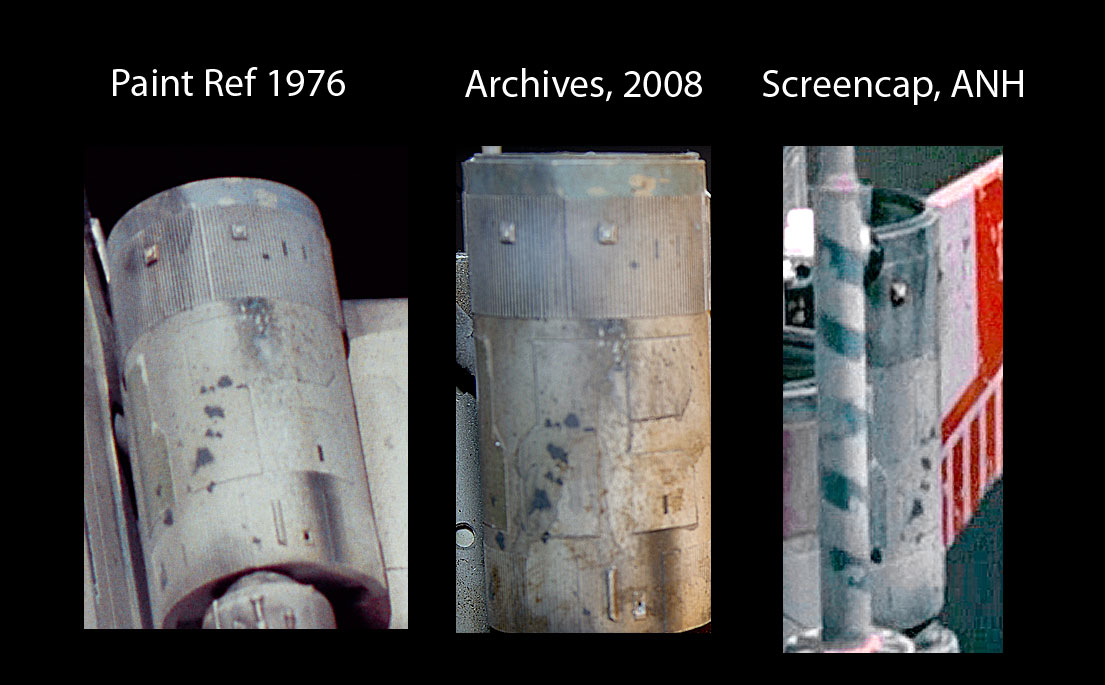 So as it stands, just three Hero birds exist today, one of them albeit in a terrible state, one seems to stay in the archives, and the other (Red2) does all the touring?

No accounting for Red Leader at all, last known pics are the Tech Journal of '95, would i be right? Those pics, may not have specifically been taken for the publication....in other words they could be a lot older?

Im not sure on pyros that still exist, but would Red5 have had a pyro sister at all?
Im not so sure now as pyros are for a specific purpose, and this birds purpose was to look pretty (its the heros ride) at all times....'cept now of course :lol

On the subject of the Dagobah Red5, i was just look in the Chronicles, there is is a shot, of a Red5, mounted to a rig via its nosecone opening!

This Red5, looks too detailed to be an AMT, just look at the buttplate maybe? Also,the F4J engine cans...there seamed, just as a Hero birds would be!

So Mikes theory could be right (was it Mikes theory? lol) This prop was submerged, those lower intake extra parts, are maybe a grain of wheat bulb with what could be a silicone rubber cap over them?

Or, was it something to manipulate landing gears that were retro fitted?

If this is the first case, perhaps the hull was removed to dry out those electronics...then misplaced..or damaged...still doesnt explain why it had four stripes after this period though..and they appeared with a complete hull in the same book...so i have no clue as to what point im making :lol

I don't think that's the same Red 5 inasmuch as there's no evidence of modification to the lower engines for landing gear stuff... but...

Yeah the non modded engine cans and the fact the same ones fitted in '76 or so are still on the prop, blows holes in that theory....i see the ballcups Jason is reffering to, but ill be damed as to what the purpose of these were, unless there was a small rig to pull them together to facilitate the failing stepper motor action?

Ah what the hell...what do i know, not much about X wings i can tell ya LOL.

stonky said:
Other than Red 2, have any other ANH X-Wings made their way to one of the museum exhibitions? I wonder if Red 5's fuselage might be alive and well (wishful thinking here), but part of another X-Wing now. Swapped perhaps during the Star Tours shoot?
Click to expand...


Red 2 was in San Francisco for the Art of Star Wars exhibition in 1995, I believe. And I'm fairly certain Red 3 was there too.

Where else Red 2 has been, I personally don't know, but am pretty sure its seen a few other museums.

Red 3 on the other hand doesn't seem to have seen as much daylight.

Don, is there any chance you can shed light on The History of The X Wings?

Were the models catalogued while you were the archivist?