RPF PREMIUM MEMBER
So happy together... 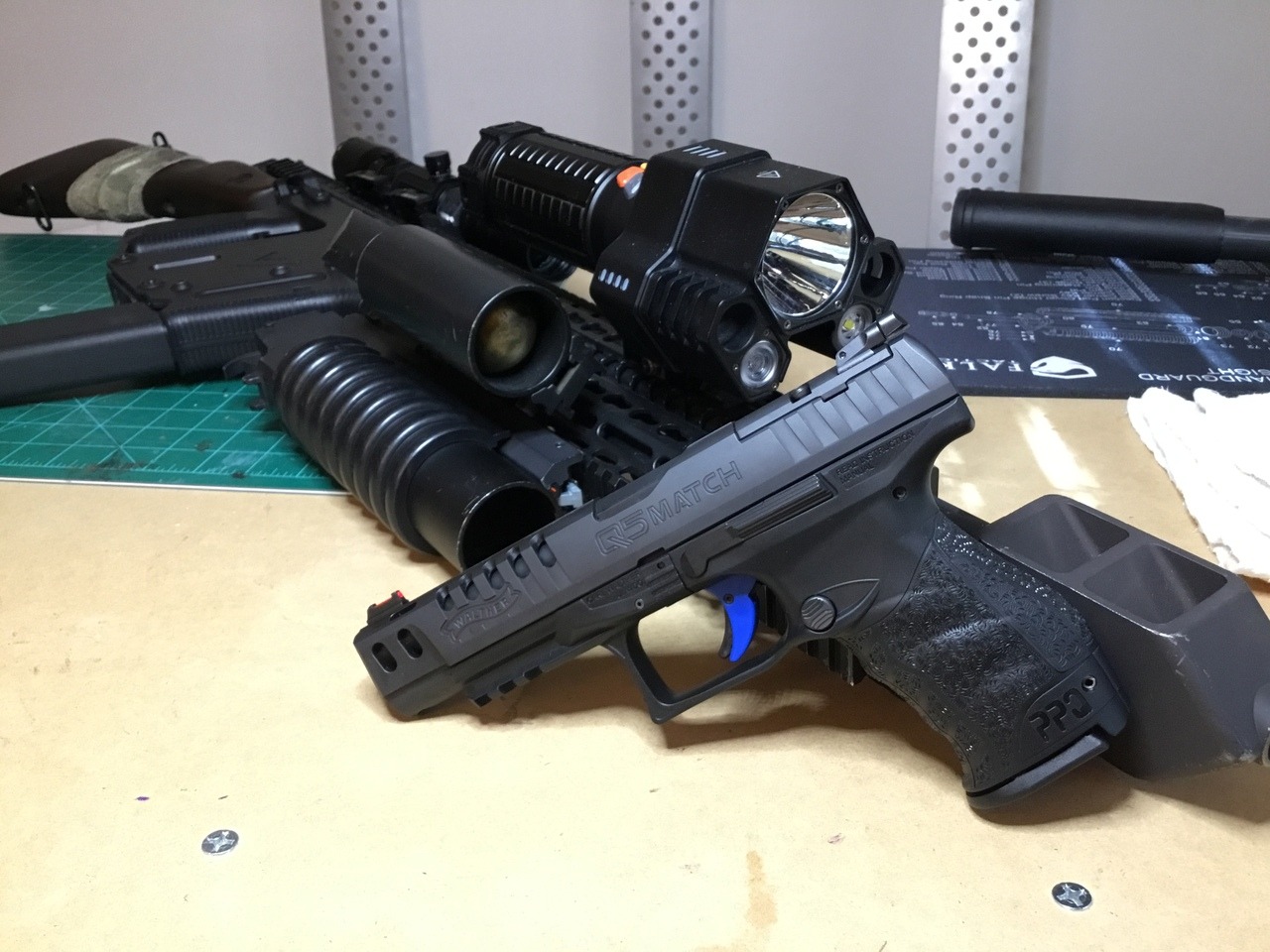 As for the way to attach the Thompson stocks - there is an actual piece of hardware that exists to modify a normal Thompson to accept the stock, but even that would need to be modified in order to attach to the shroud.

EDIT: You're also going to want to refine all of your front-ends with the word "KeyMod", which is the mount style or system that's used on the sides of the shroud / rail system. That opposed to rails (picatinny, which is the top and bottom) or M LOK (the better version of keymod, not found on the rifle that I can tell)

RPF PREMIUM MEMBER
Yessir! I finally caved and bought one. Just finished it's initial cleaning before that picture, and hitting the range tonight to put a couple hundred rounds through it, see how it fairs. Truthfully though, that 5" barrel is amazing for sighting and far from cumbersome; I'm expecting to love this one.

May eventually try to mold it and pull a couple screen accurate replicas for an Essex House load-out. If I do, I'll be sure to show progress pics here!

triggerhappy said:
If you have access to your own 3d printer and want the STL file for the dial and chips. PM me your email address and ill send it to you.
Otherwise if you don't. I will be getting my friend Jodocast who did the files for me to upload them onto shape-ways soon. Where you can get it printed in various different medias and shipped to you.
Click to expand...

Please let me know once you put the on shapeway, I’d definitely like to get these. These piece looks amazing, awesome job.

Don't know if he is going to put it up on shape ways as the upload has changed or so he said something along those lines. But i can send you the file and I'm sure you capable of finding somebody nearby that can print it.

If I give you the file you can just load it onto shape ways yourself.

triggerhappy said:
If I give you the file you can just load it onto shape ways yourself.
Click to expand...

Thank you that would be really awesome. I just sent you a message.

I’ve just started my BFG build. Here in Oz it’s hard to get the parts so I’m building it with a Kris Vector gel blaster base.
After being a bit lost on the jargon/ names for some of the parts and getting some help here I tracked down a few things and pulled the trigger on the build today.


The shrouds I decided to have a go at welding them together using an aluminum welder. 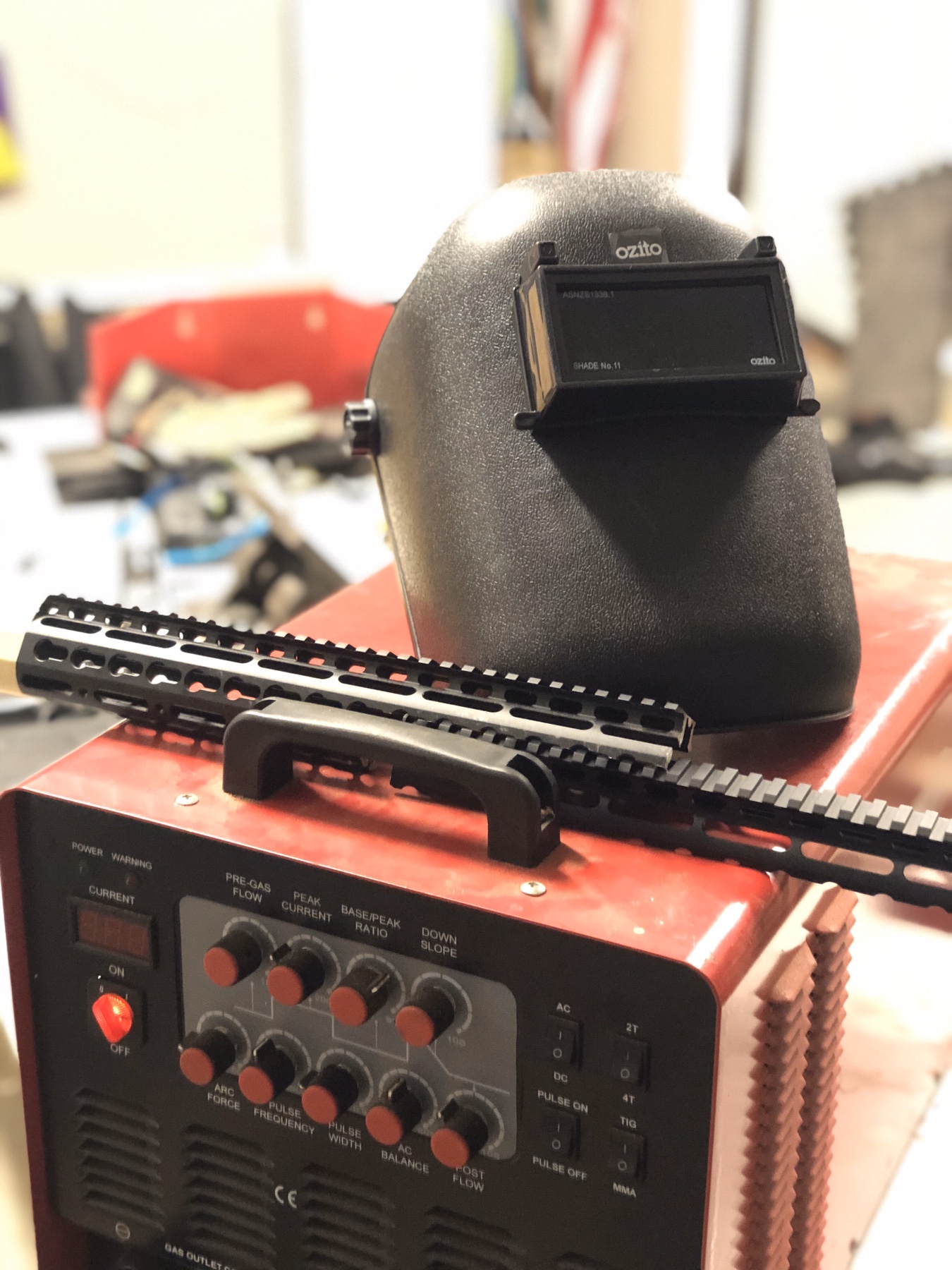 I welded a rail to the inside of the shrouds as my mounting system- so I could just slide it along the rail mount on top of the vector.

The weld held strong. Needed a bit of clean up
But turned out ok

Next I’m machining the stock mount.

Still a ways to go. It seems customs didn’t like my barrel so I’m going to have to make my own.
But I cut the 3rd shroud to length and figured out the angled mount o the scope. 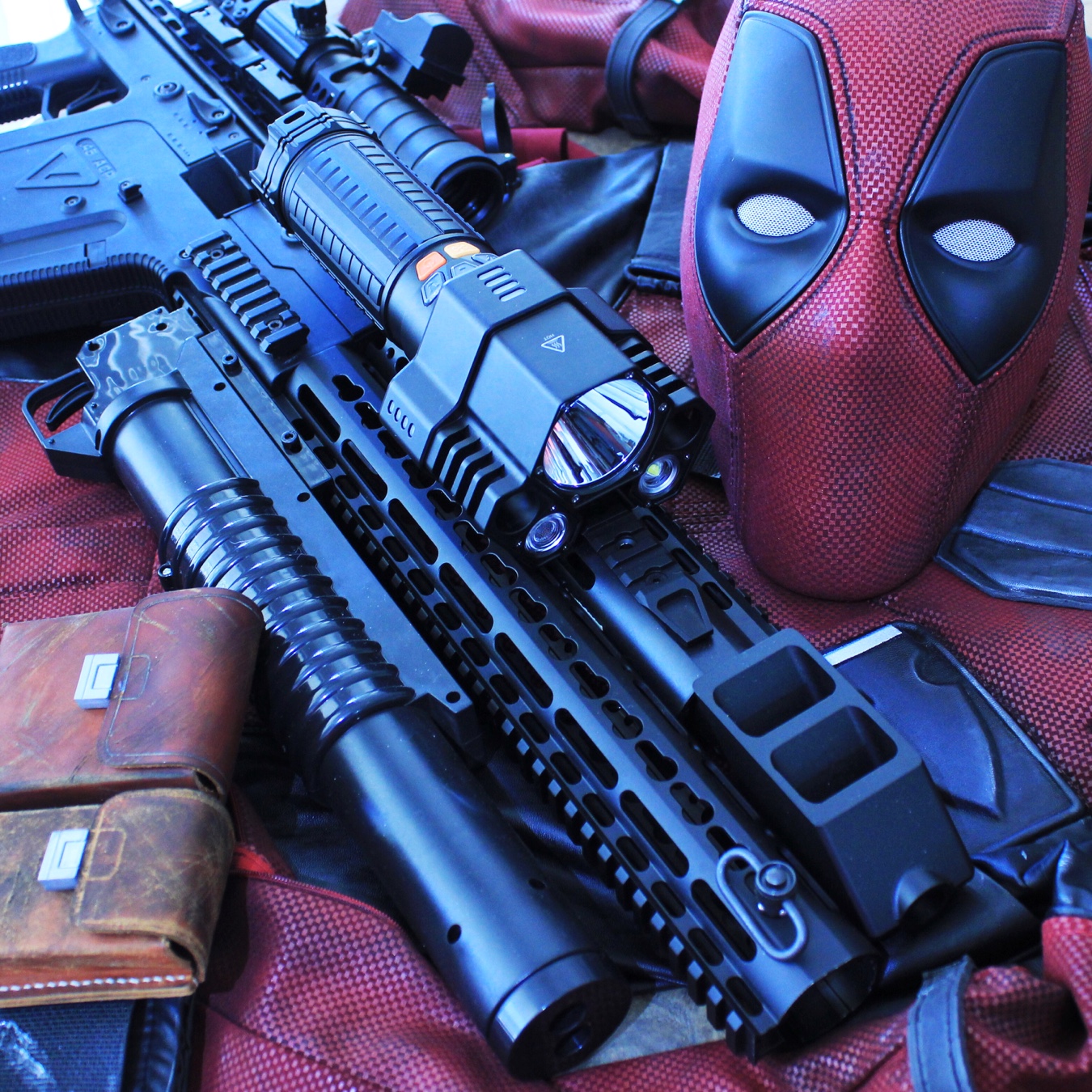 RPF PREMIUM MEMBER
Looking awesome triggerhappy and dontfeedmyego! I love the idea of rocking a Deadpool carrying the BFG; "this things got some zip!"

I drew up a quick picture for dontfeedmyego on how my shroud is attached to my Vector, and realized I should share it here in case others want to do something similar. You have to fabricate a small handful of parts, but the process made it pretty dang solid. 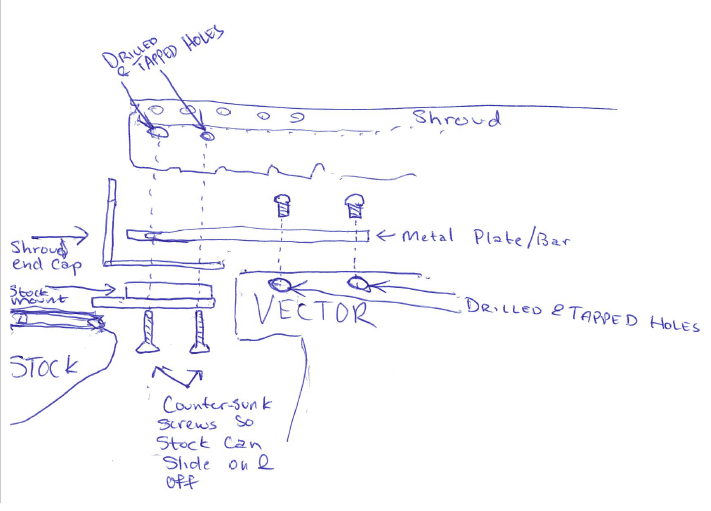 Sorry for the slop, didn't make it pretty as I didn't initially think to share it.

RPF PREMIUM MEMBER
Alright, finally taking a crack at making a couple con-safe replicas of the Q5 Cable uses. This thing is easily the most complex piece I’ve ever molded, so I imagine it may take a few attempts with a few materials. Starting with some easy Oomoo 30, bit this may not be the best for all of the holes and details regardless of how I’m setting up my mold-lines. 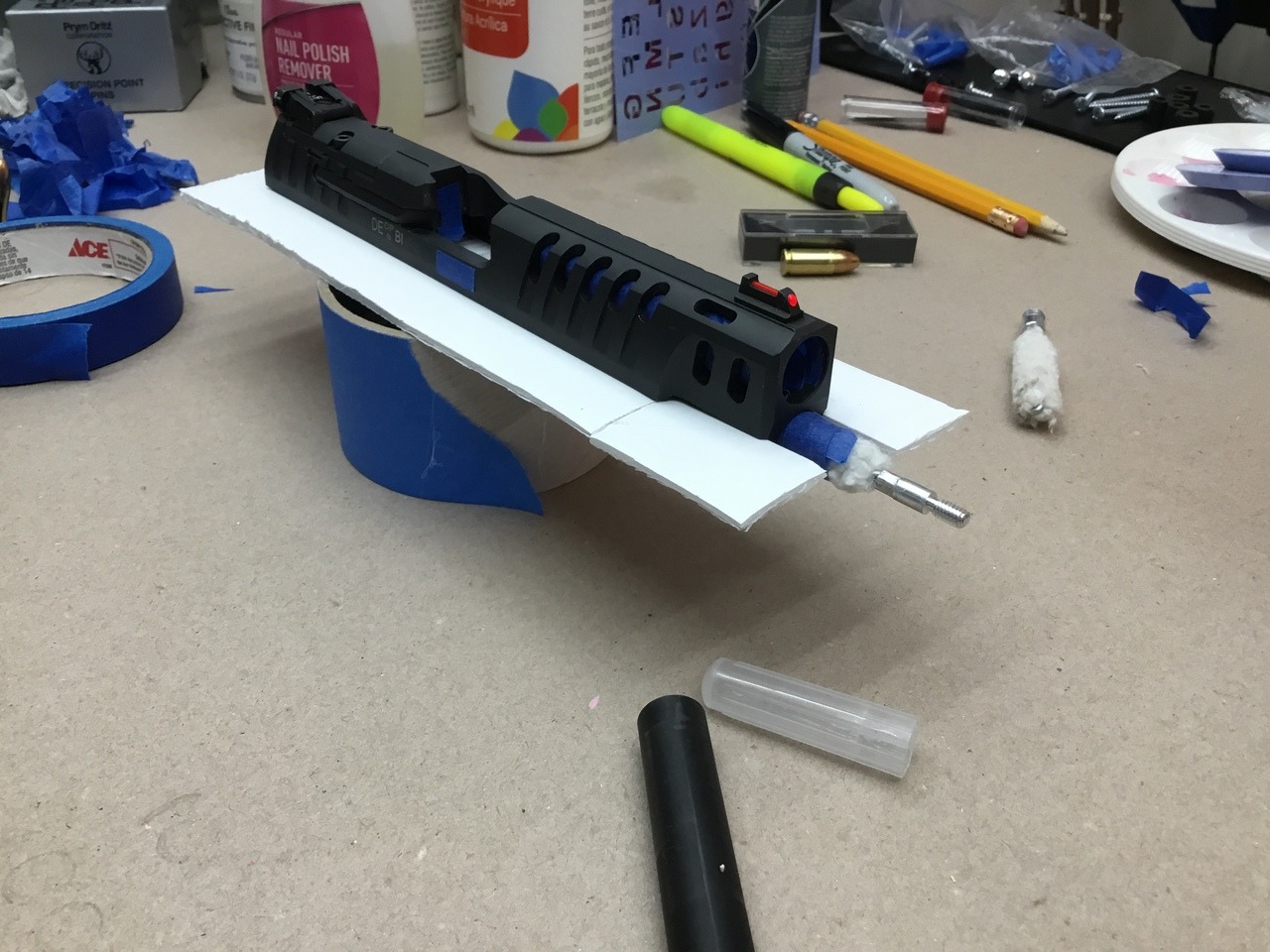 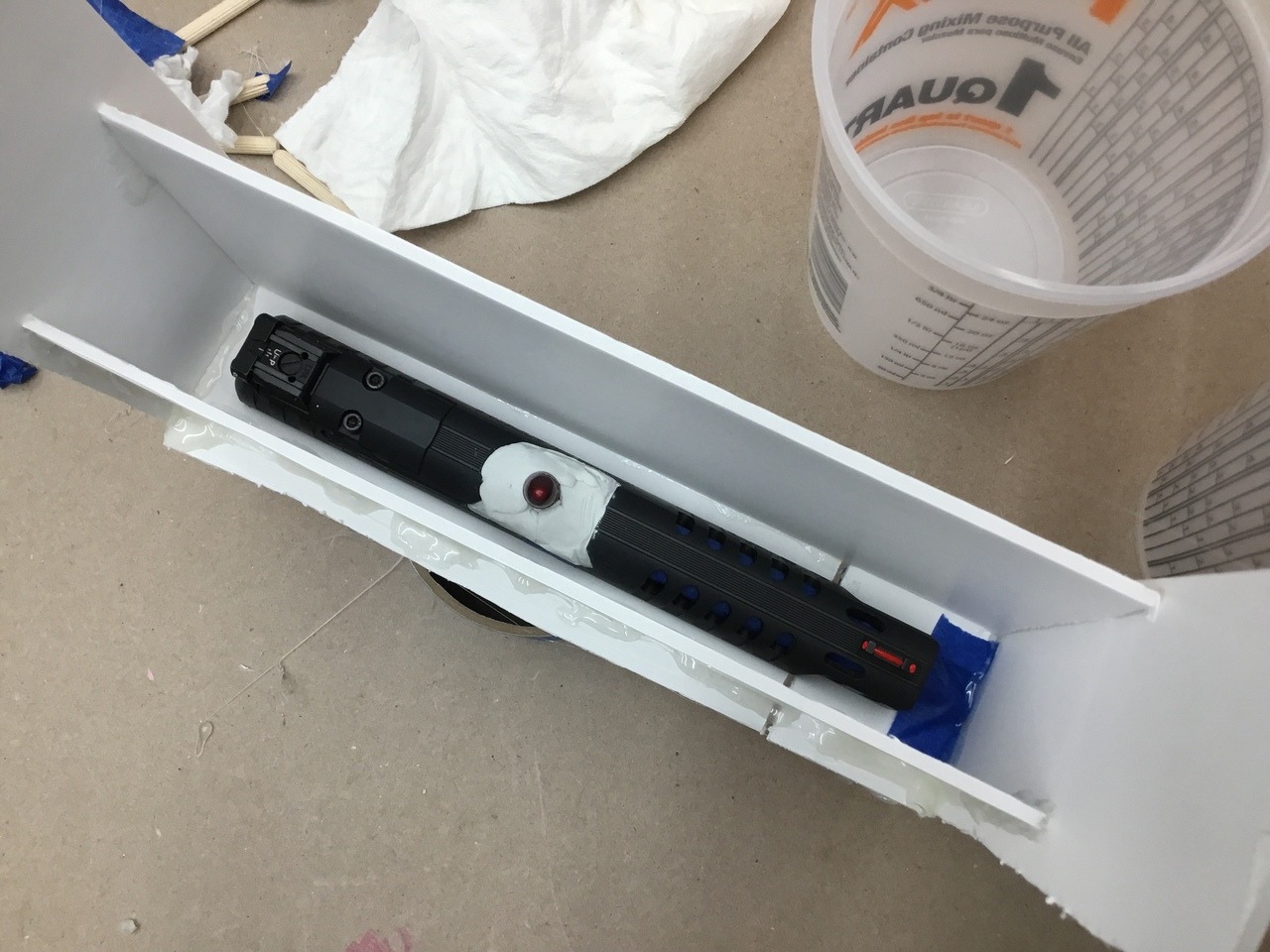 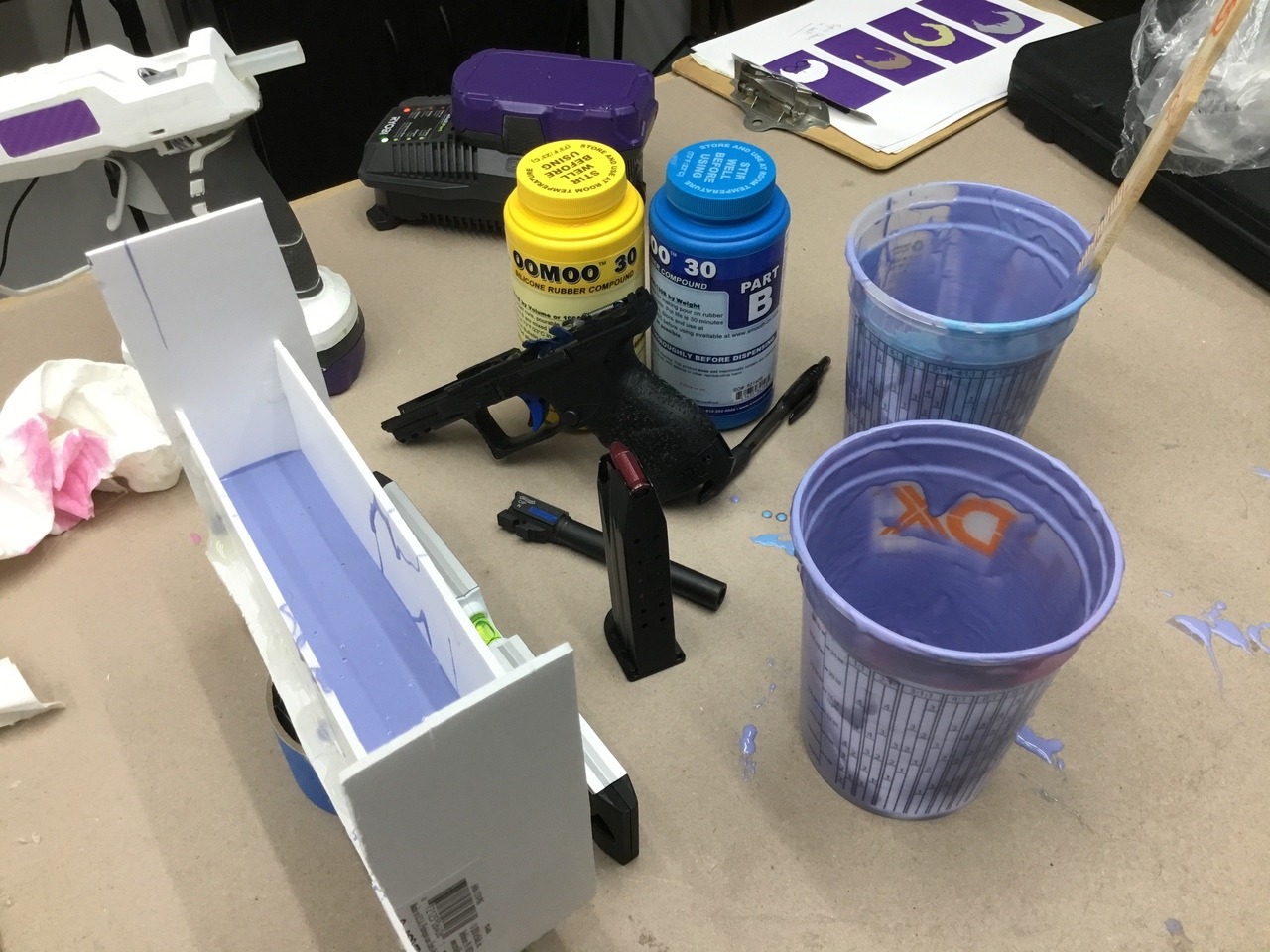 Nice one Toggle47. Will be interested to see how it turns out

RPF PREMIUM MEMBER
It's coming together, but I hit the first couple snags. All of my mold lines landed just about exactly where I wanted them. The front of the slide came out perfectly; the vents look fantastic, the engravings are sharp, the front sight came out wonderfully. 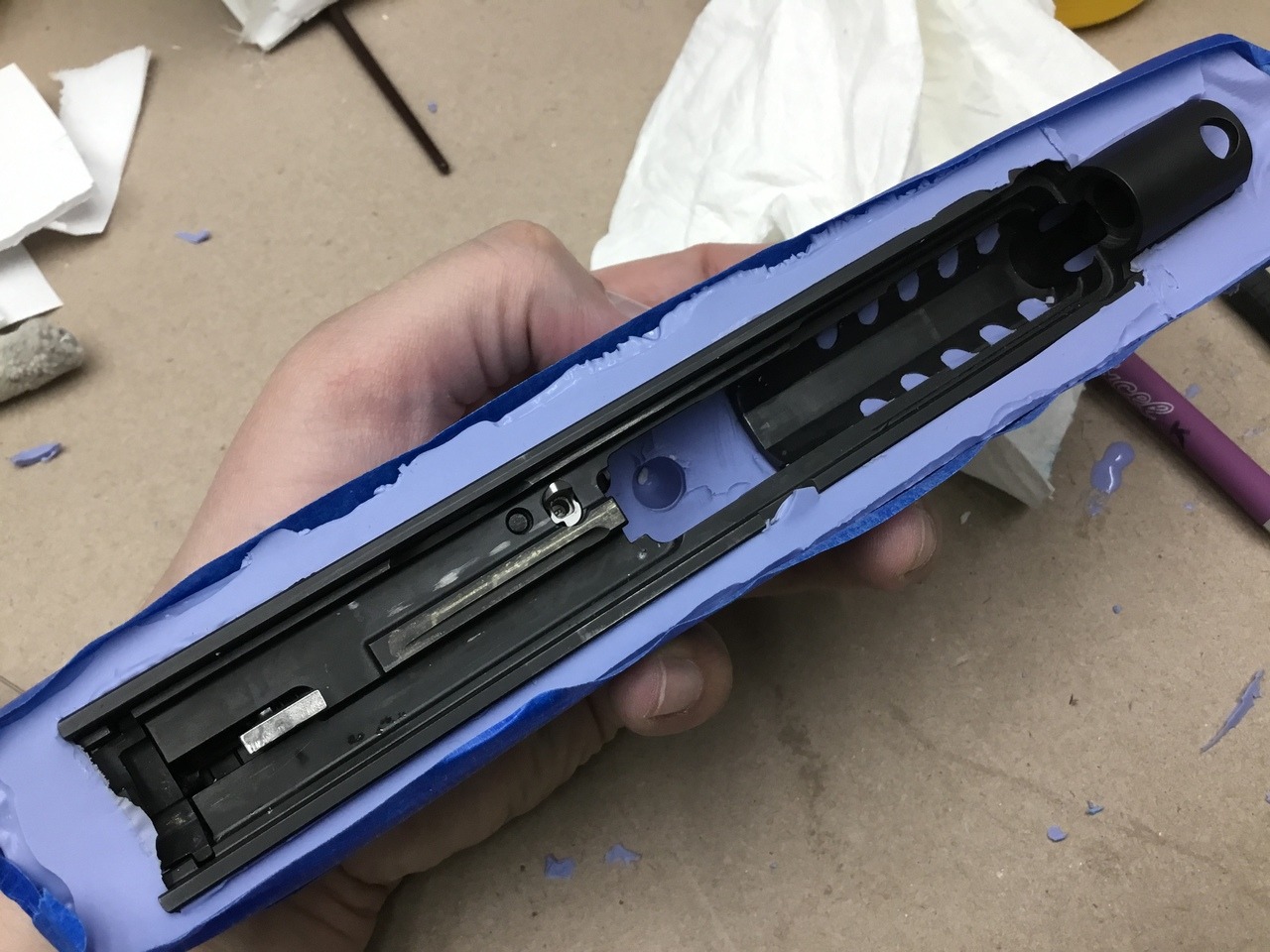 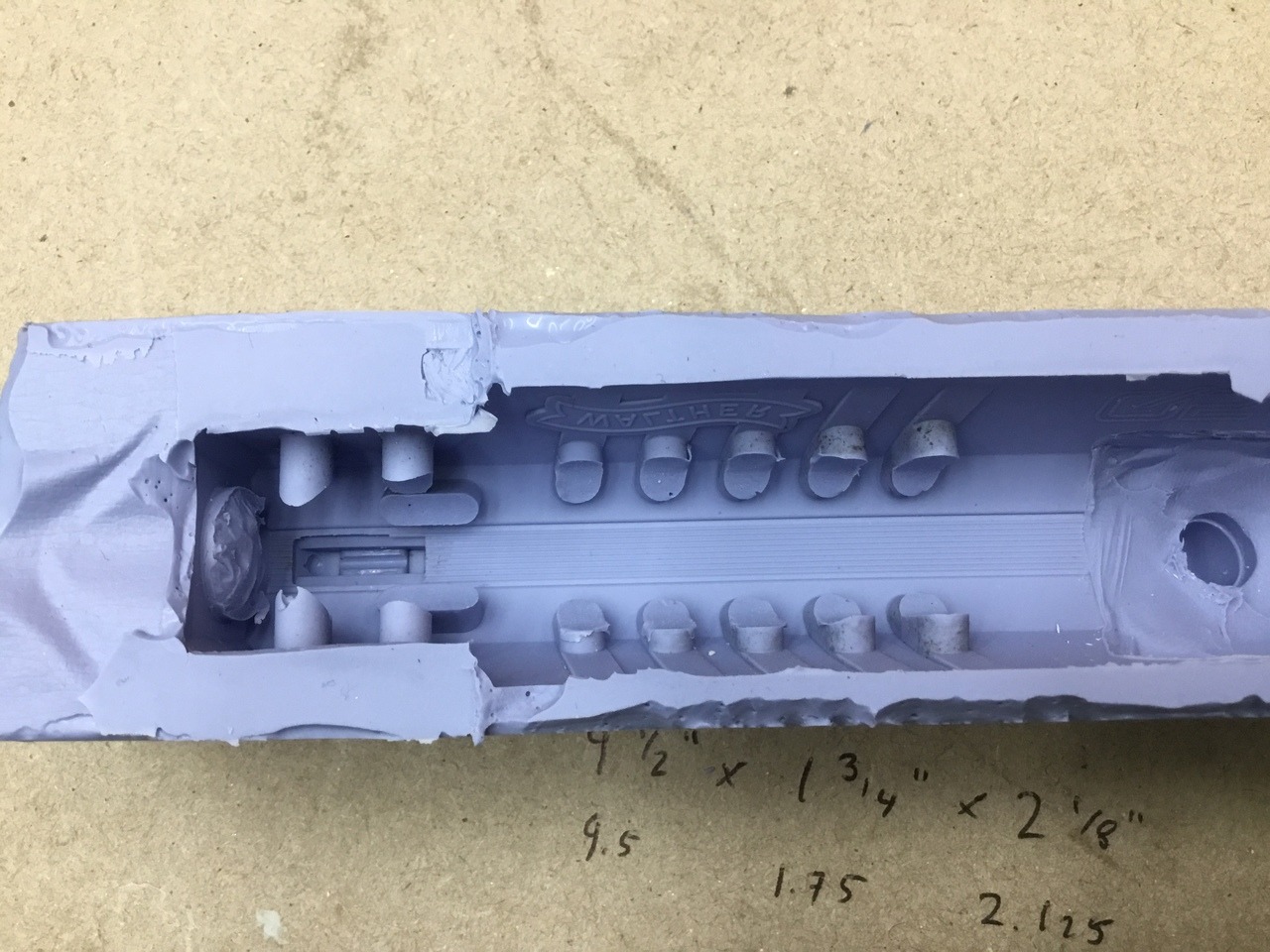 The rear caused some problems though. Too complex of geometry around the rear sight, and some trouble with the extractor. You can also see I wasn't as thorough with cleaning in some of those crevices... Luckily, the buildup didn't seem to affect the silicon setting. 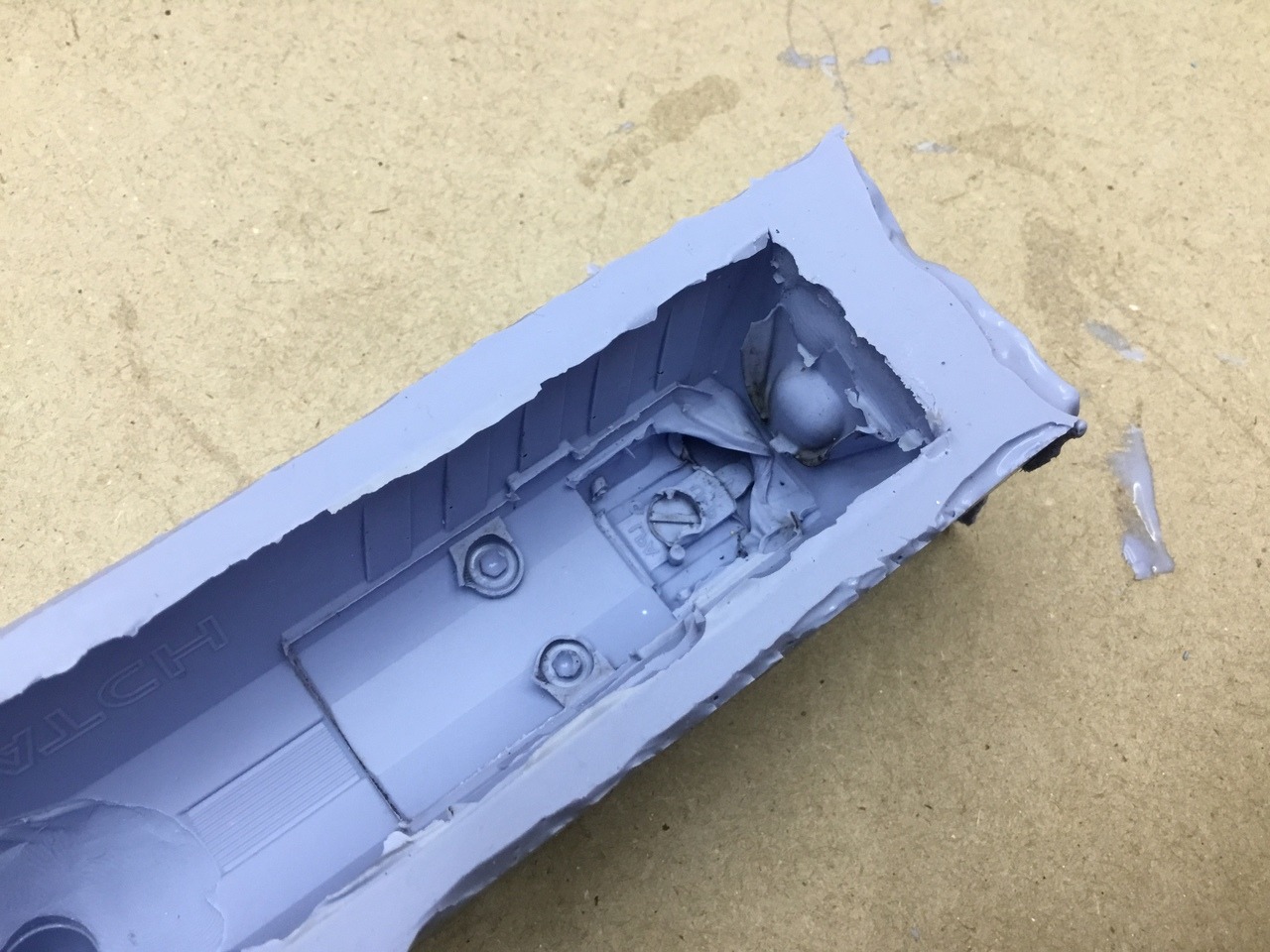 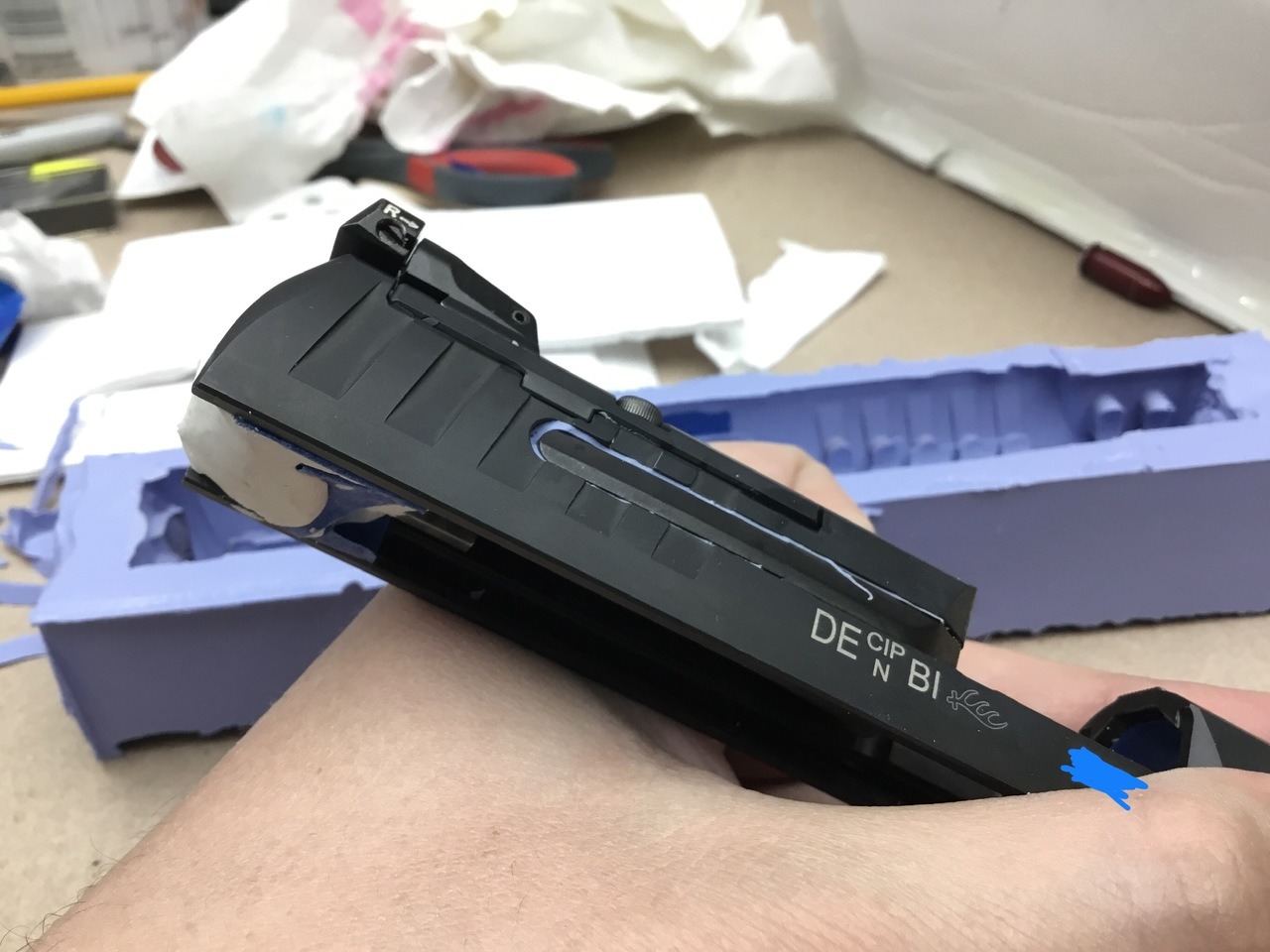 Removing the extractor and molding it separately lends itself to more trouble than I care to deal with (unless I have to), so I'm going to leave this alone and see how it looks on the final pieces that come out of the next mold. However, the rear sight can be easily replicated with a small one piece mold, so I'll be popping that off for my next attempt on the top half of the slide mold. 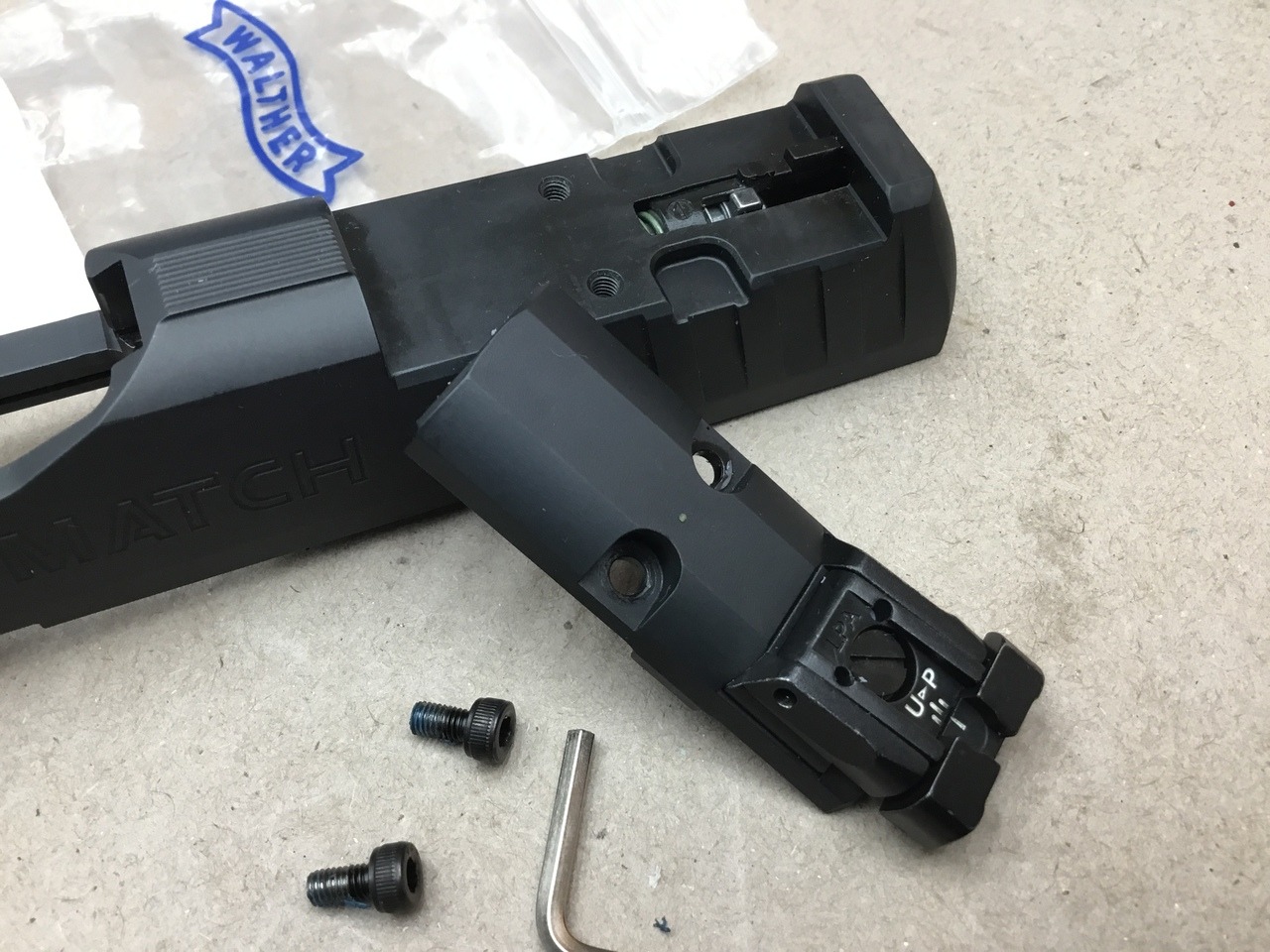 So I'll be taking another stab at the first part of the slide mold again this weekend. As for the rest of the gun... the trigger control group has a TON of tricky shapes that have been obnoxious to try and mask off to make the mold. 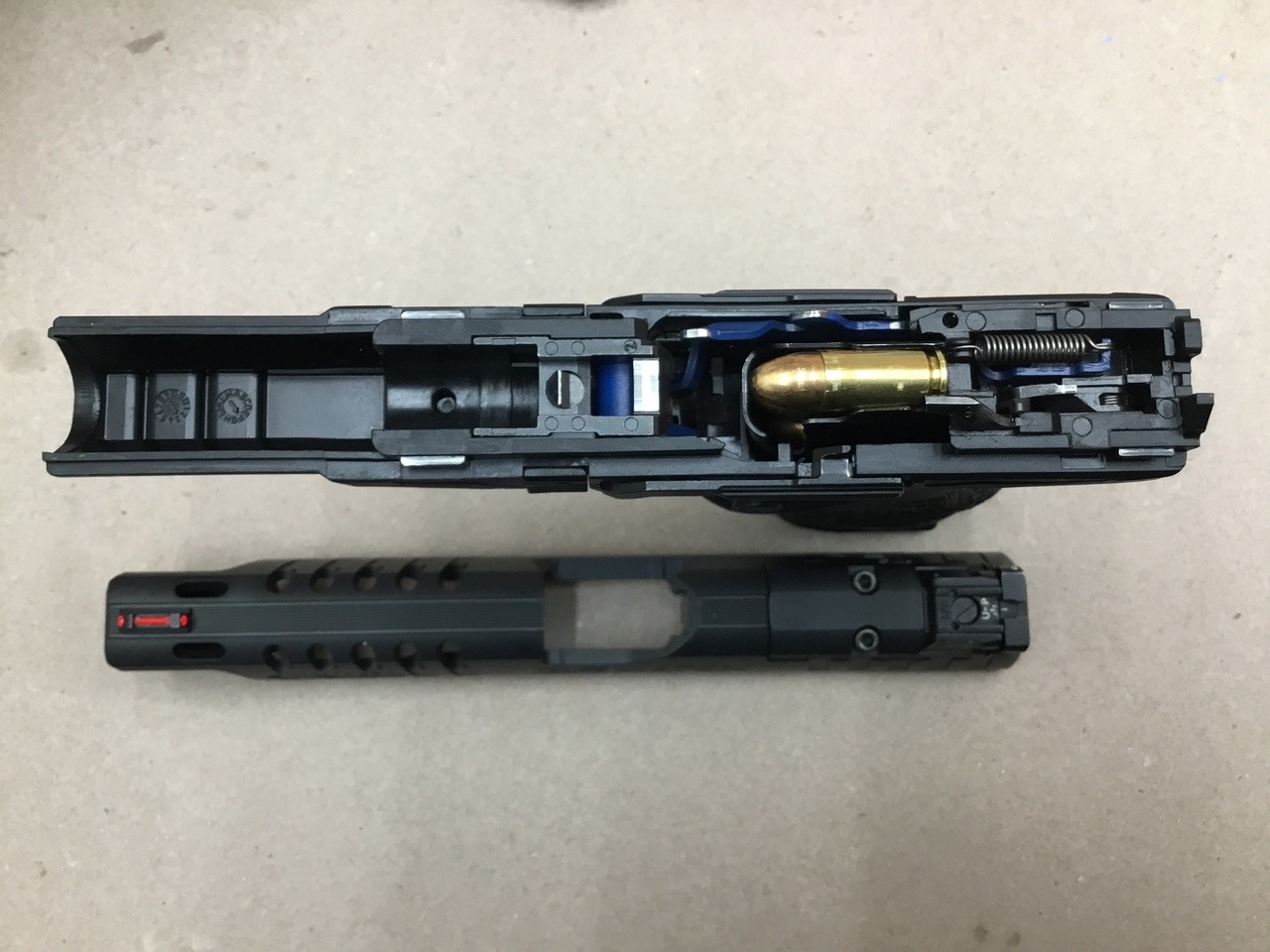 Before I go through the process of removing all the guts of this, and cause myself a nightmare level of cleaning silicon out of an epic amount of hard-to-reach crevices; I wondered if I could just use a cheap $100 airsoft gbb lower to make the mold. Airsoft guns can be pretty accurate, but often are made so they don't always fit real-steel parts. How close is the replica? Is it worth $100 to gamble on that?

Maybe.. but it's definitely worth $15 to find out, and it happens that the same company has a $15 springer pistol (albeit with a P99 mag release instead of the PPQ) that I could test with. There are times I love Amazon Prime shipping, and this is one of those times. 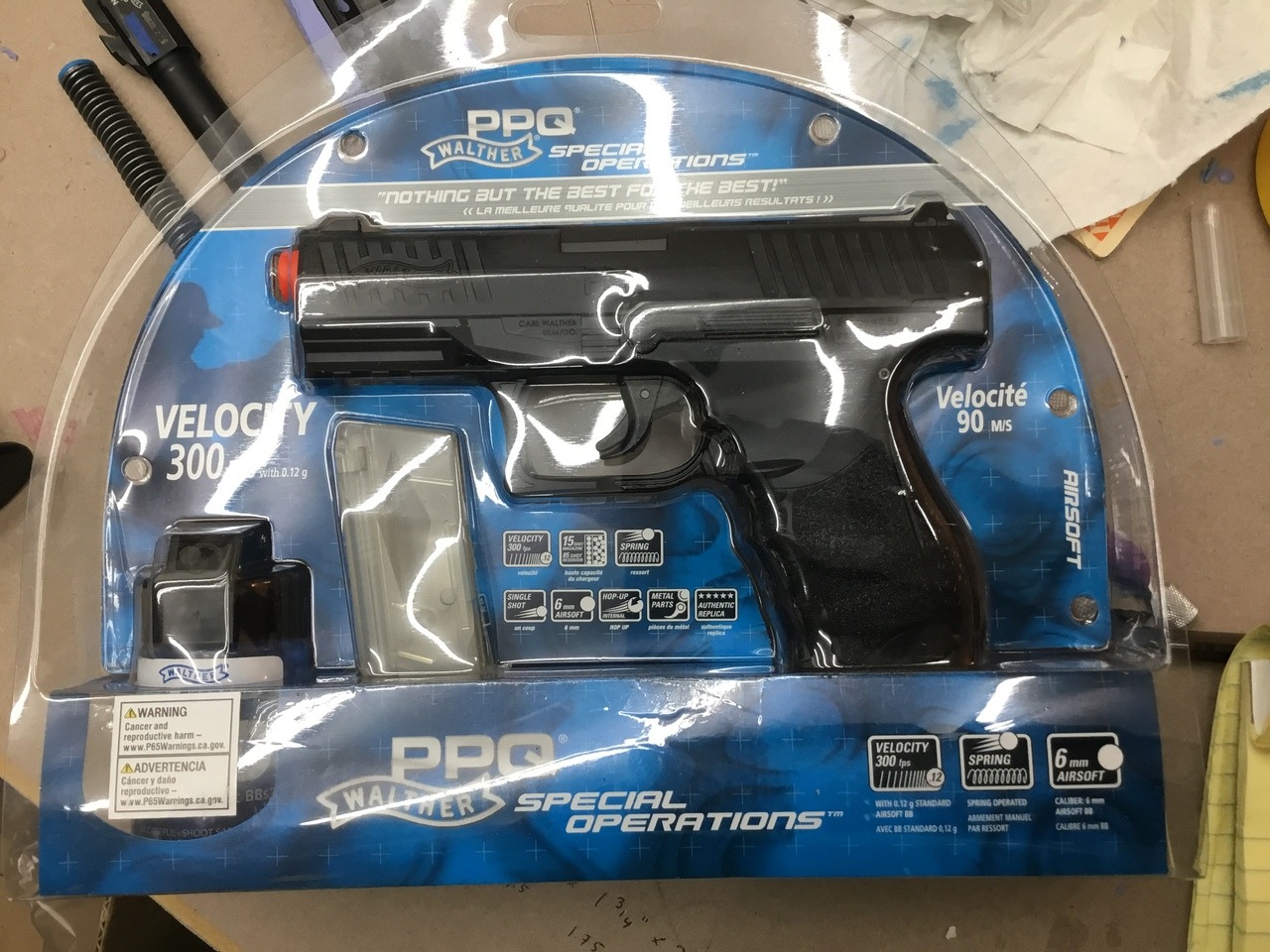 As it turns out, Umarex's replicas are ..scarily.. exact. All of the major components are interchangeable. Truthfully, I may even do a separate how-to on converting these $15 suckers into Q5 Match con safe props for you guys and gals that don't have access to a real Q5, but that's a whole different animal. 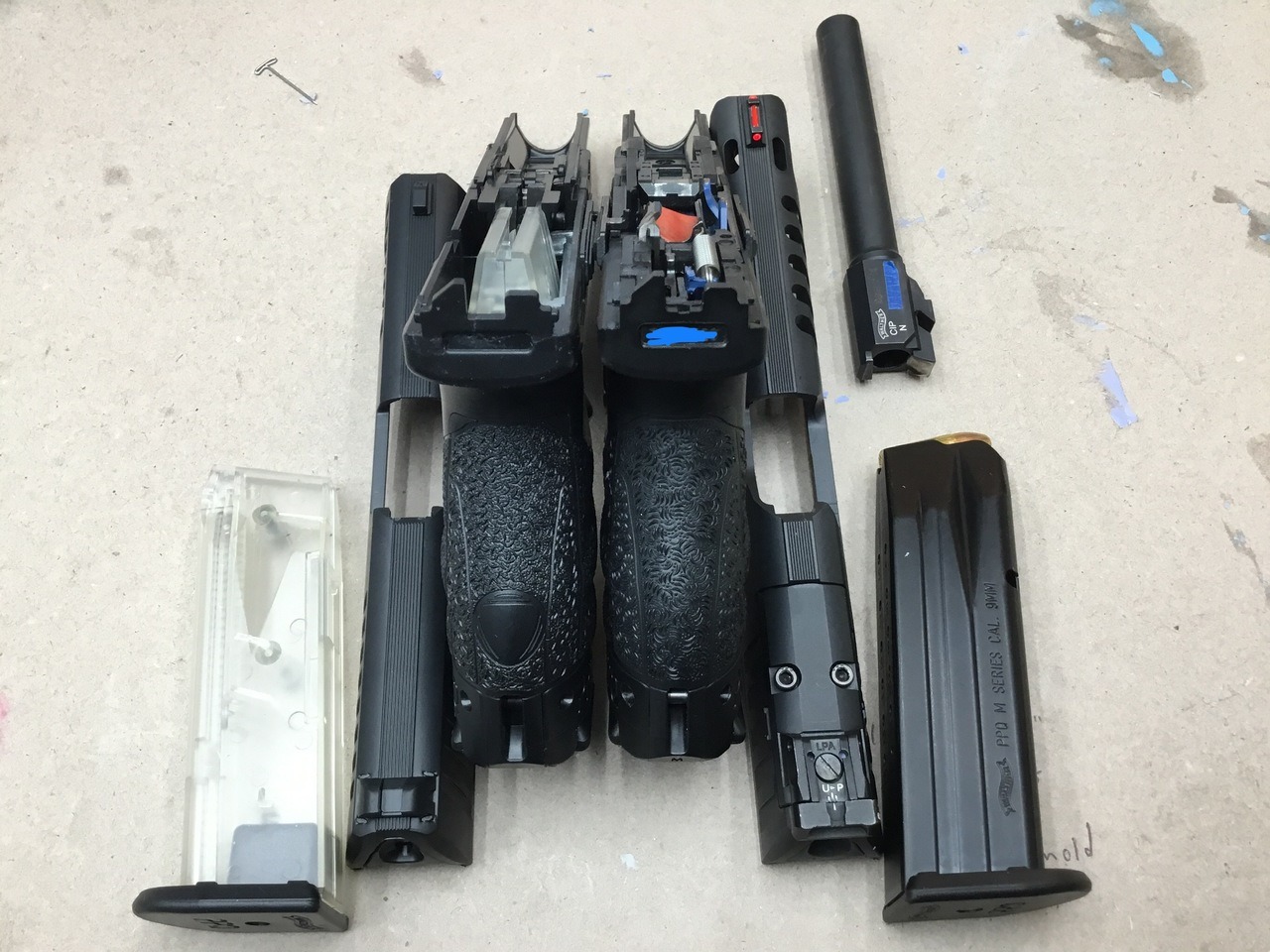 Yes. The slide of my real-steel Walther fits perfectly on this $15 toy. 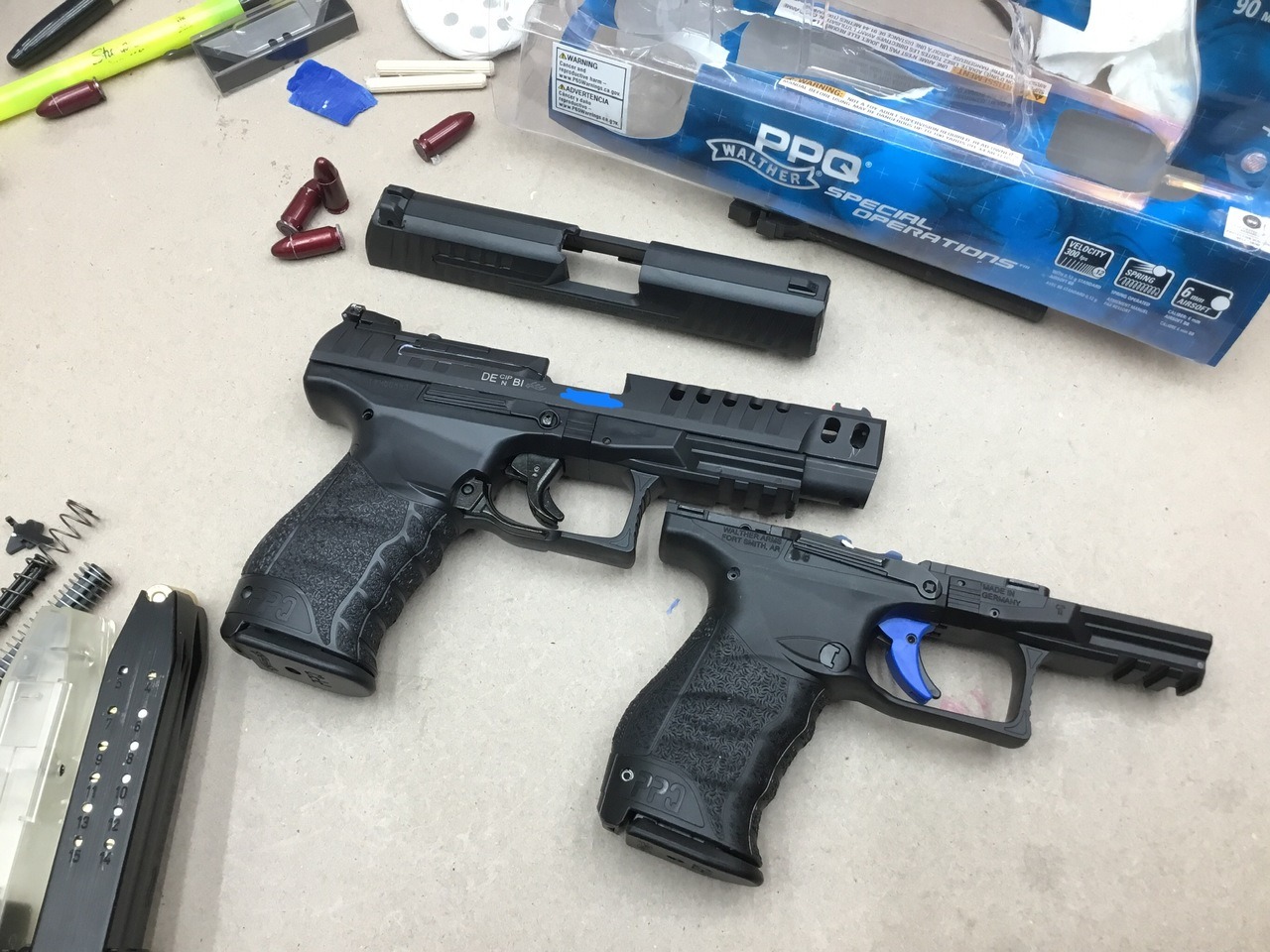 Now that I know this company has a true 1:1 replica, I'm going to order their gas PPQ (which has the correct mag release and grip design). I'm hoping to attempt the slide again in the next few days; fingers crossed it all goes well!

Any chance anybody knows what knife Cable uses in the movie. 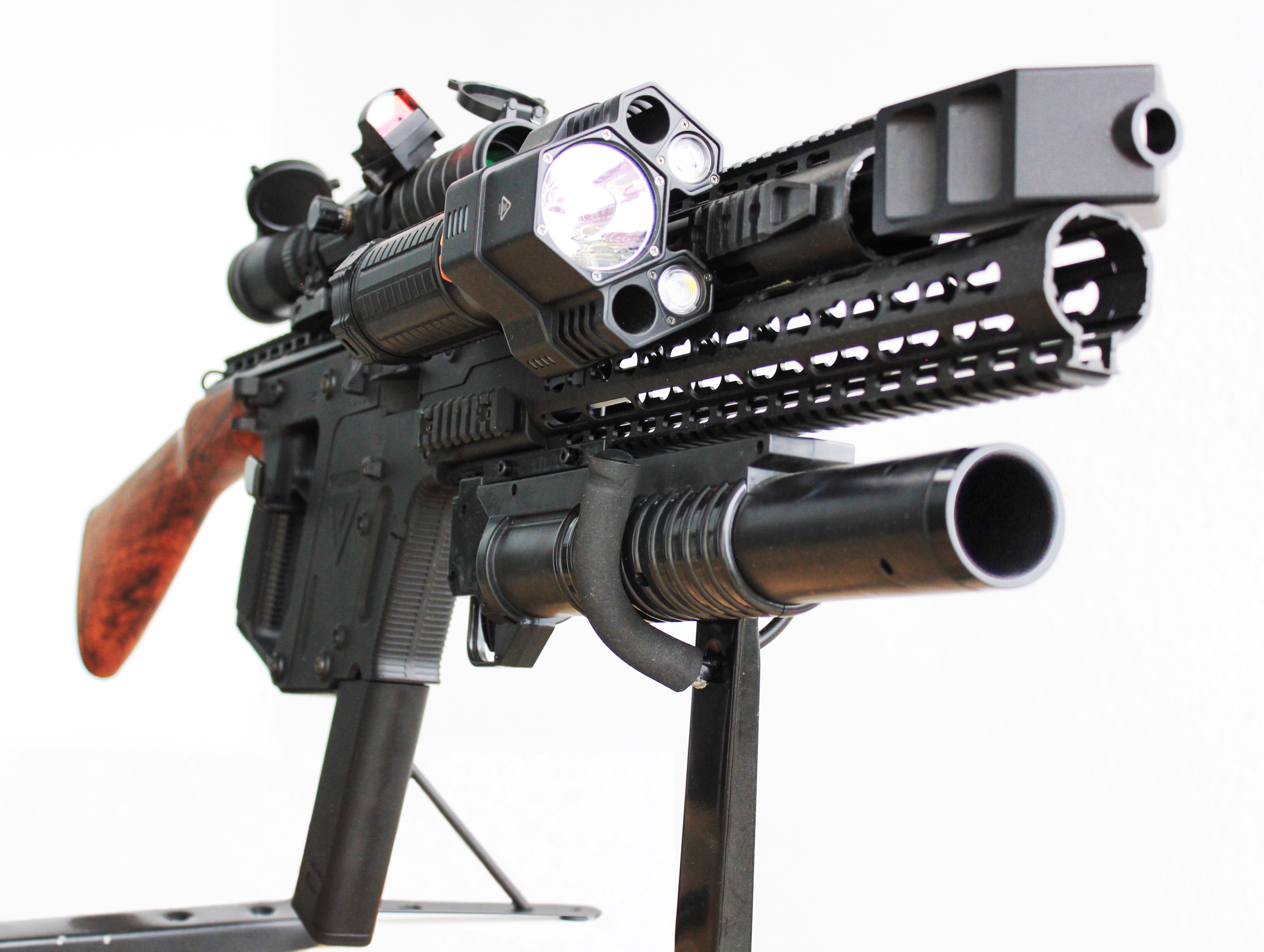