RPF PREMIUM MEMBER
With many thanks to Jason (moffeaton) and his parts thread here:

Escape Pod - all the donors being cast for you guys

I've been busy behind the scenes building up my studio-scale escape pod. Apologies for not starting a WIP thread from the very beginning, but I just kinda started in on it one day and got fairly far along before I thought to start grabbing images as I went.

The work started, of course, with cleaning up the very nice cast parts. The casting detail is fantastic and details in even the tiniest parts are reproduced almost indistinguishable from original resin donors. Some of the laser cut styrene plating needed to be remade from scratch as they did not fit the cast bucket core but I took that as a good learning experience and it caused me to finally buy my own nibbler tool.

I'll make a few posts with several images each so as not to overload any one post with too many images.

Many thanks to Sean Sides (t2sides) for the inspiration by tantalizing me with good looks at his own model and for providing a few important donor parts to supplement the smaller cast parts provided in Jason's kit. 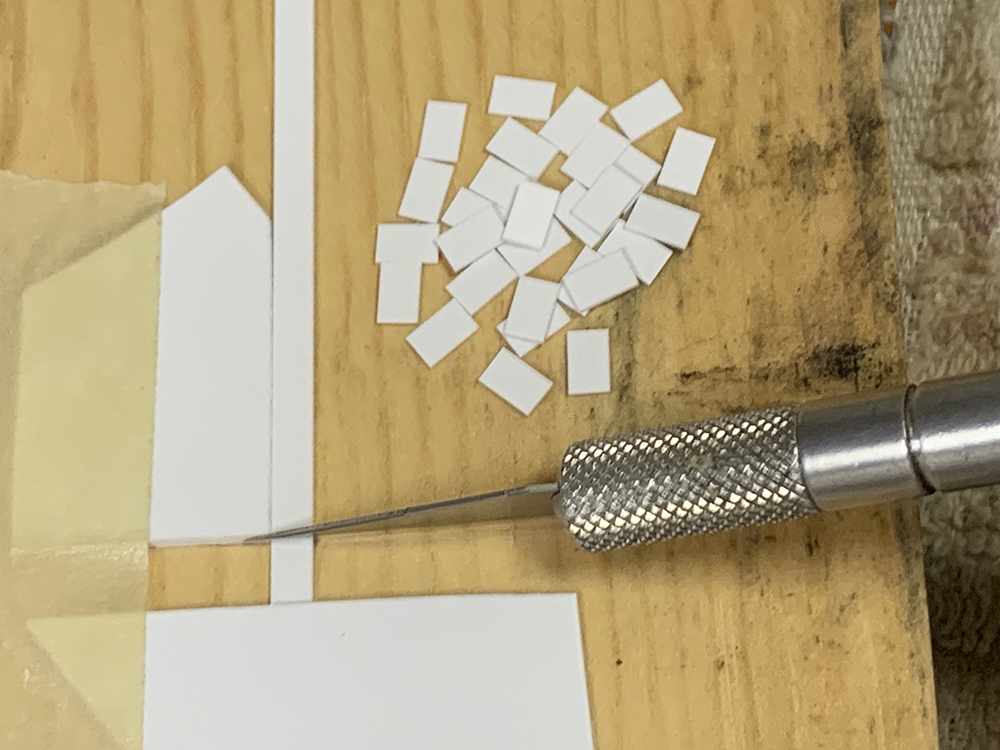 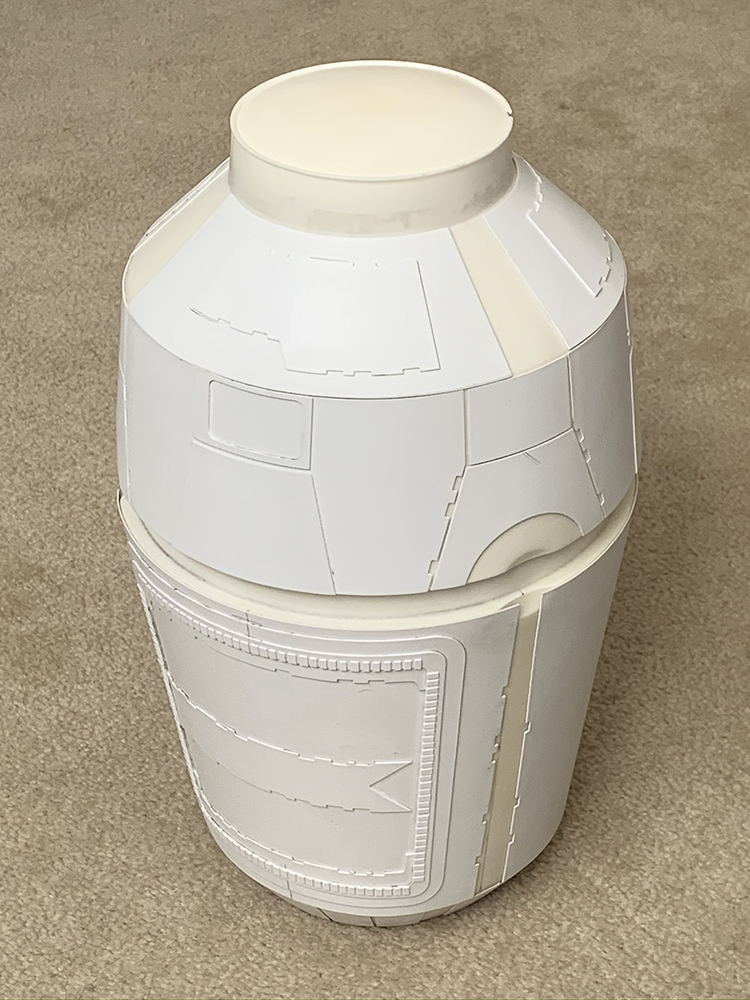 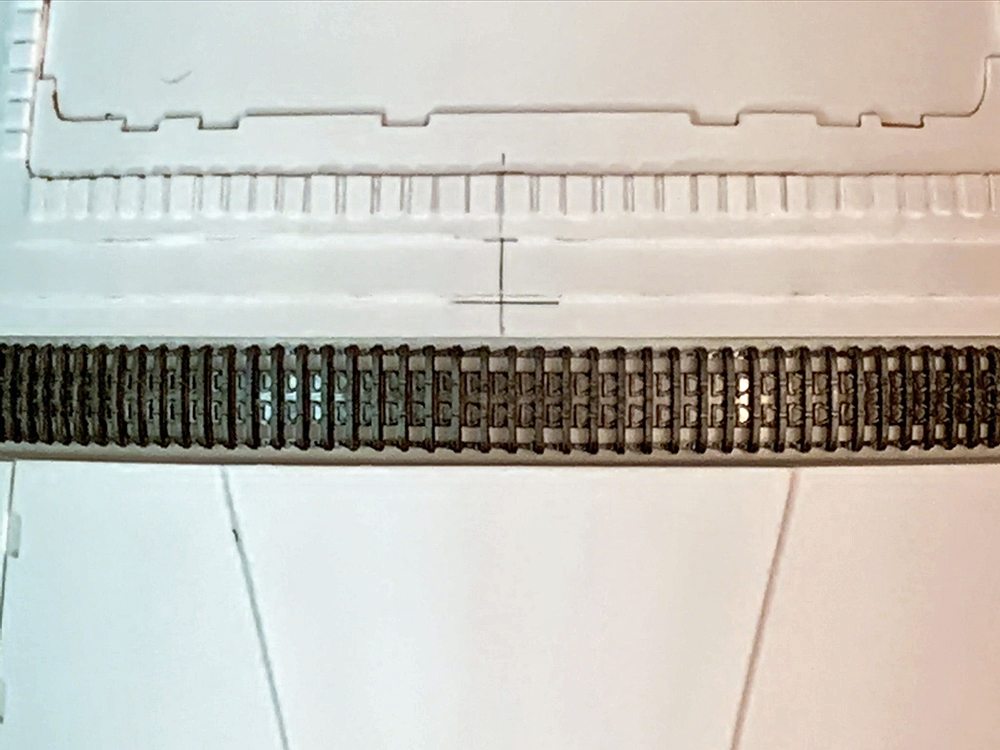 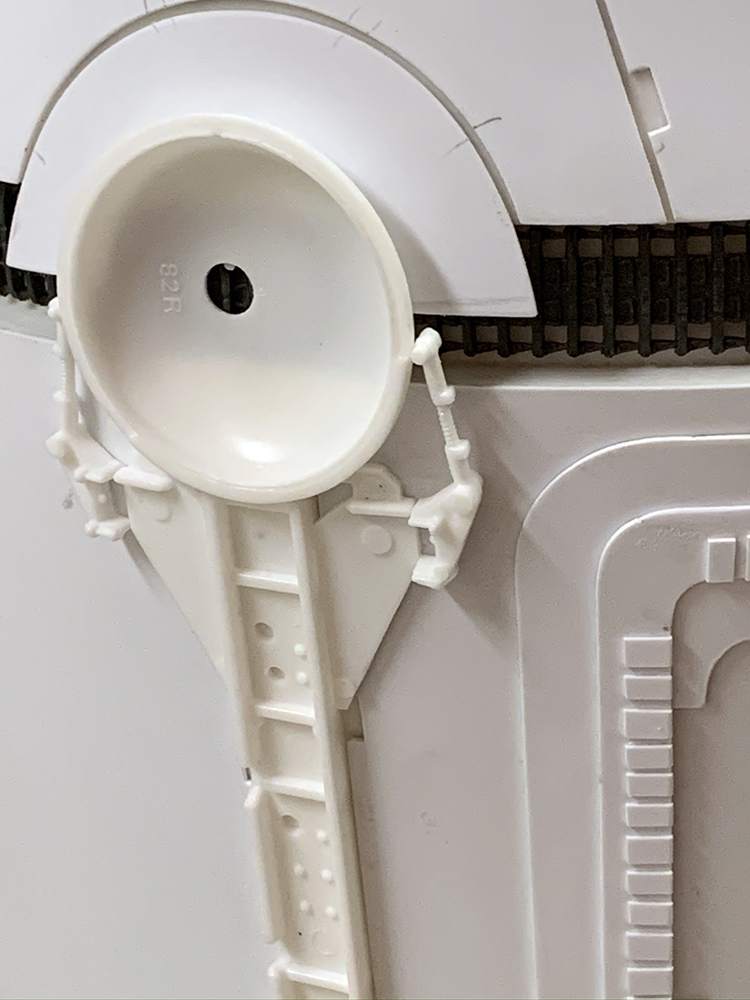 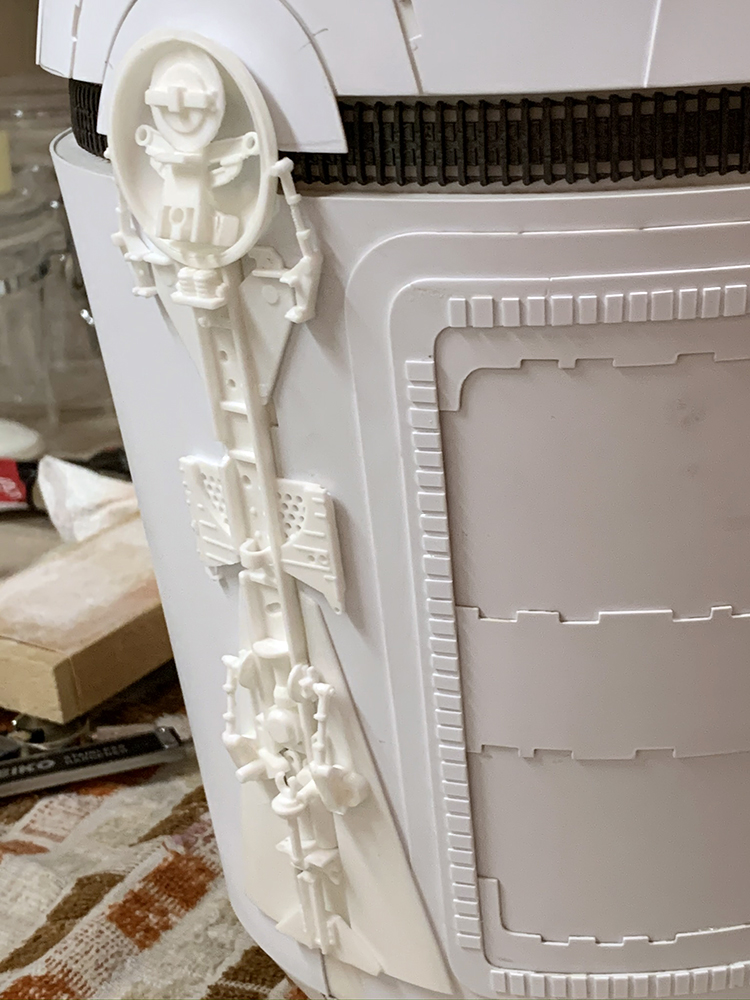 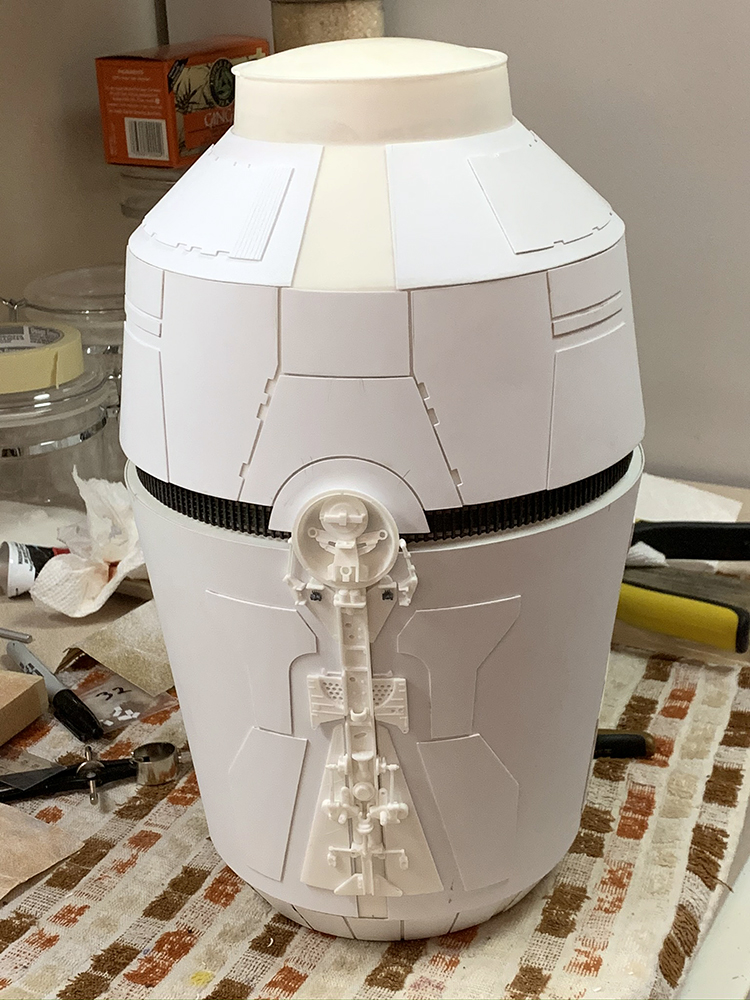 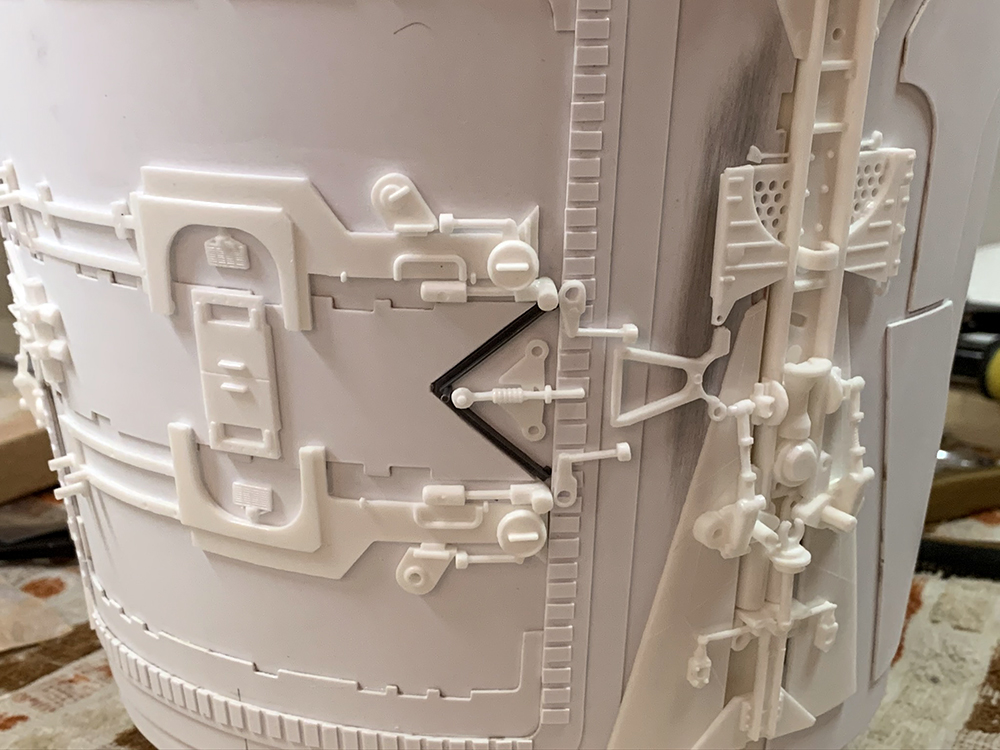 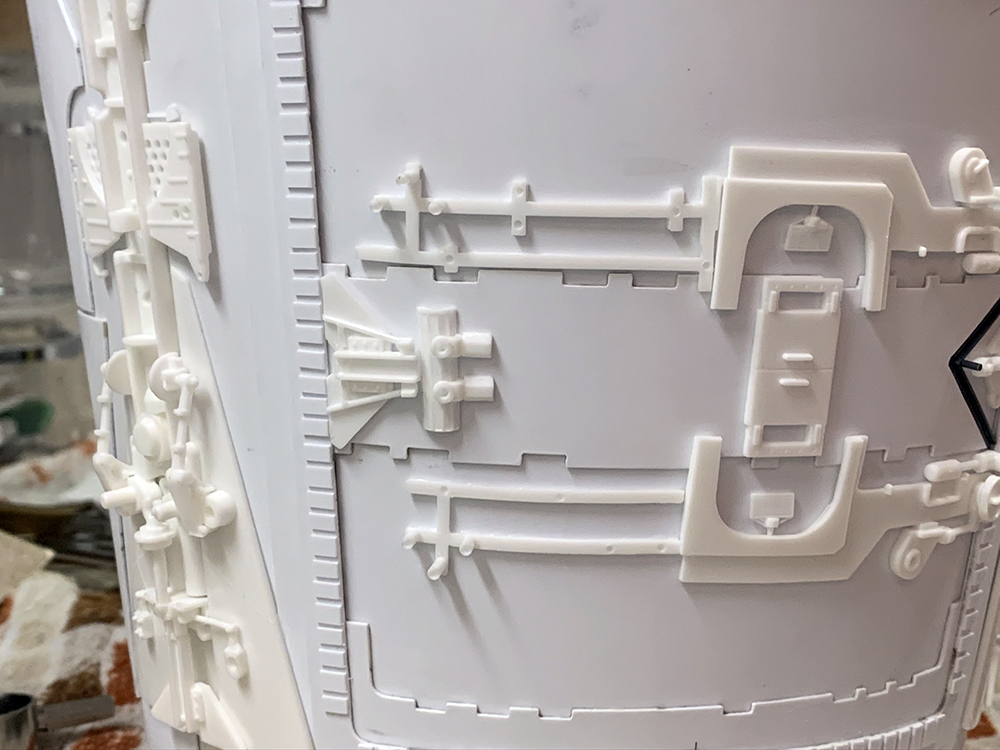 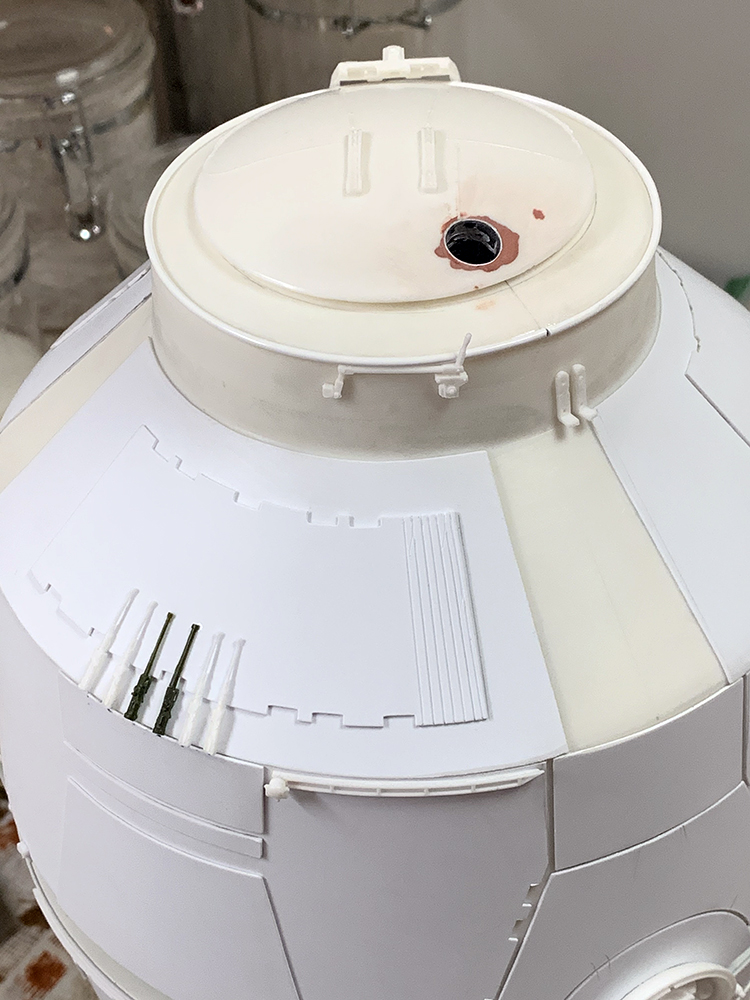 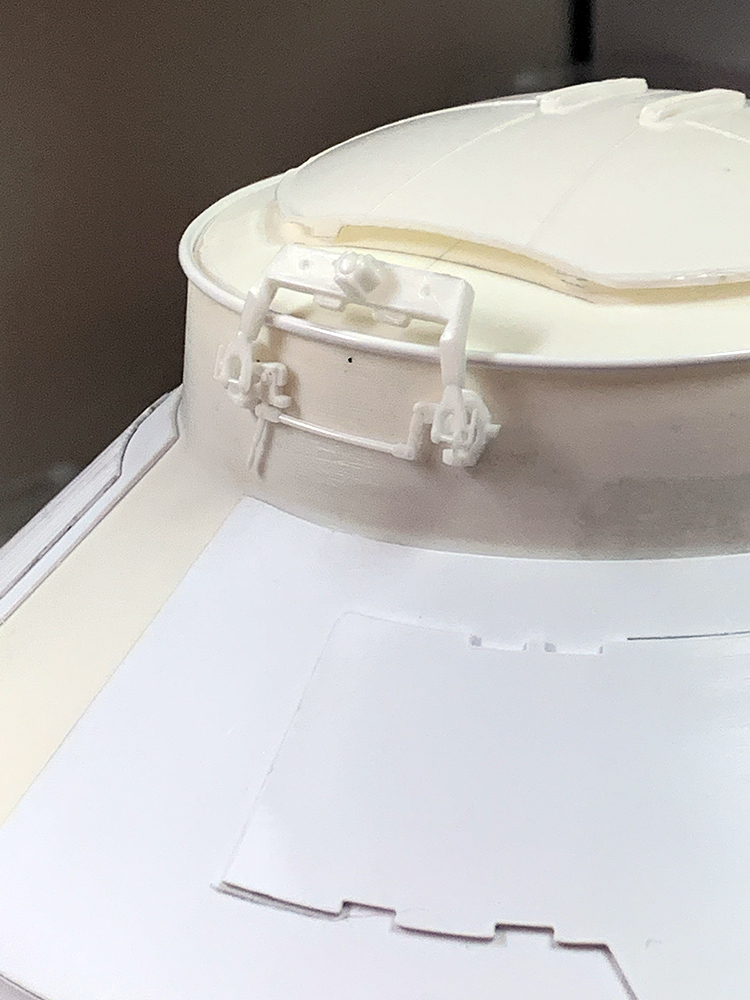 I decided to replace the cast hatch rim with styrene-wire core tubing. I also wanted to build in a central mounting tube in pretty much the same location as the original model. I'm sure this isn't quite the way the original looks mount-wise but at least it's in the right place more or less... 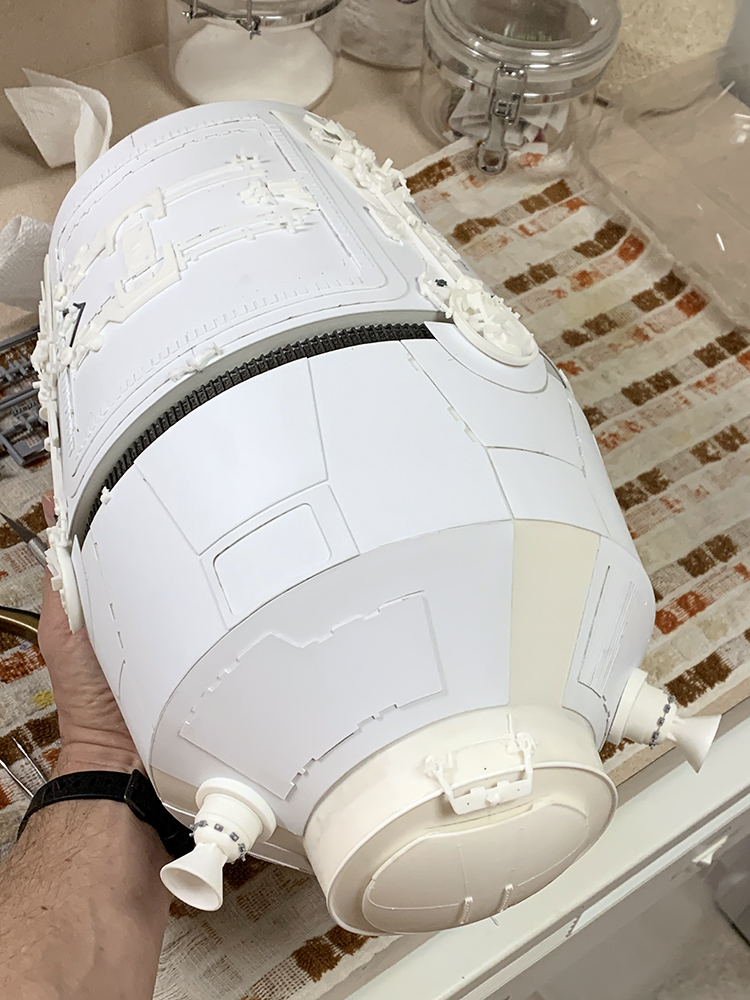 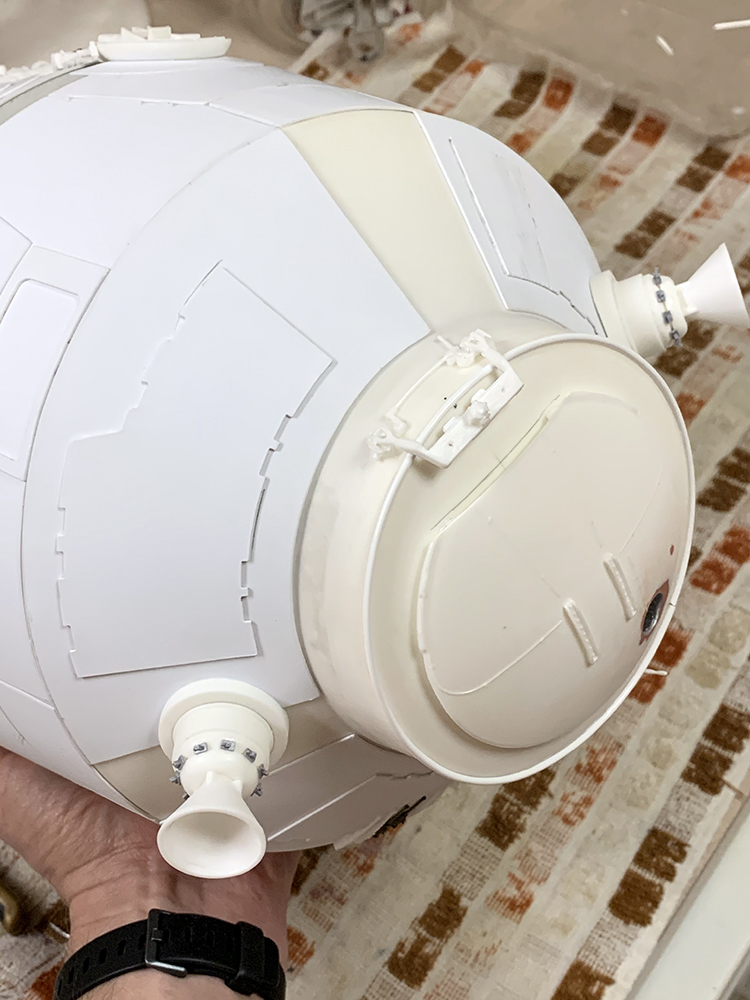 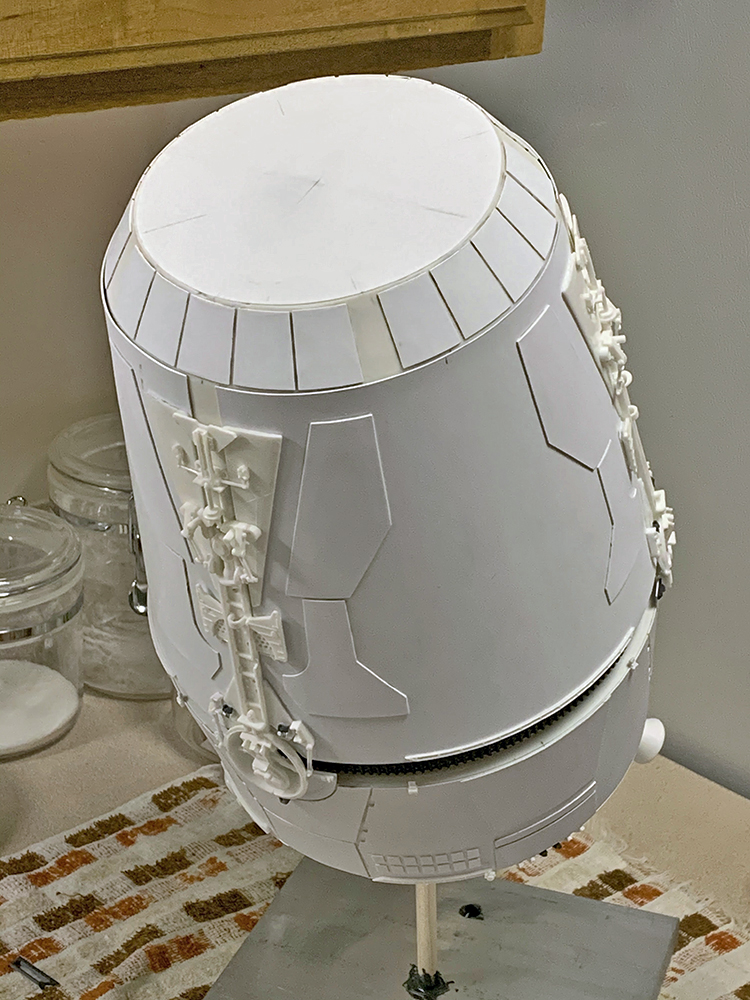 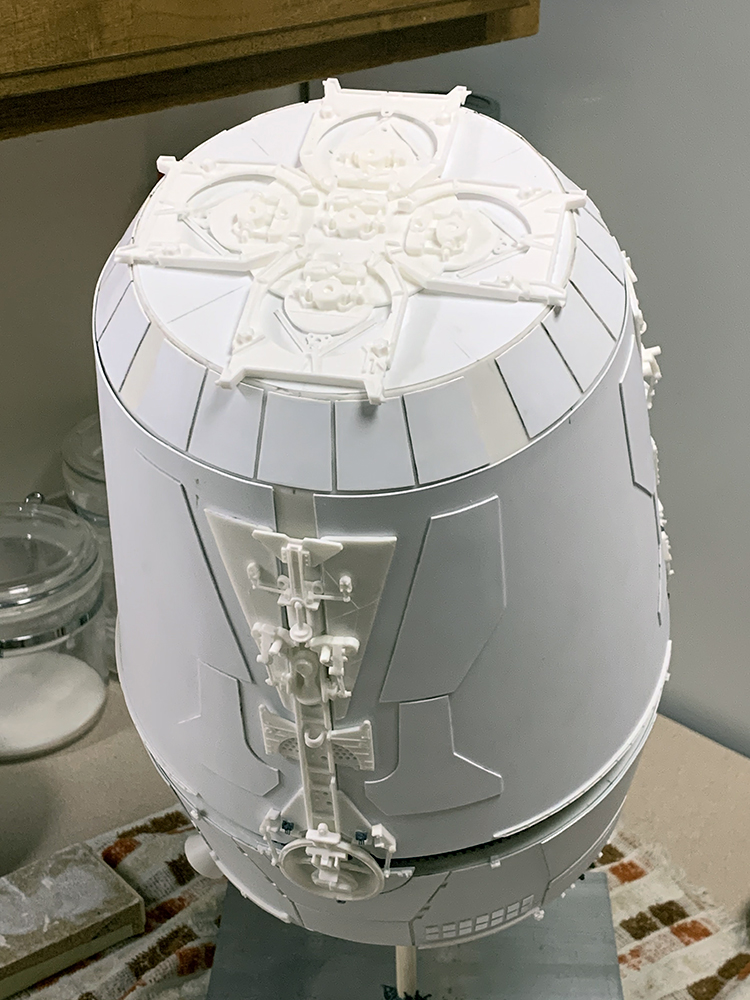 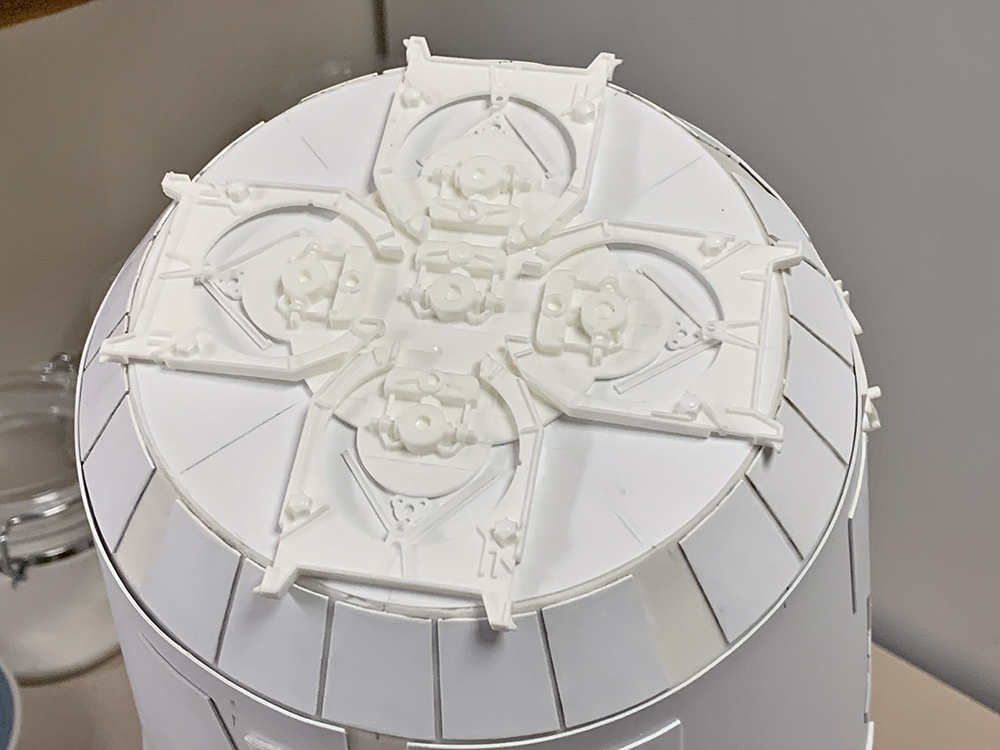 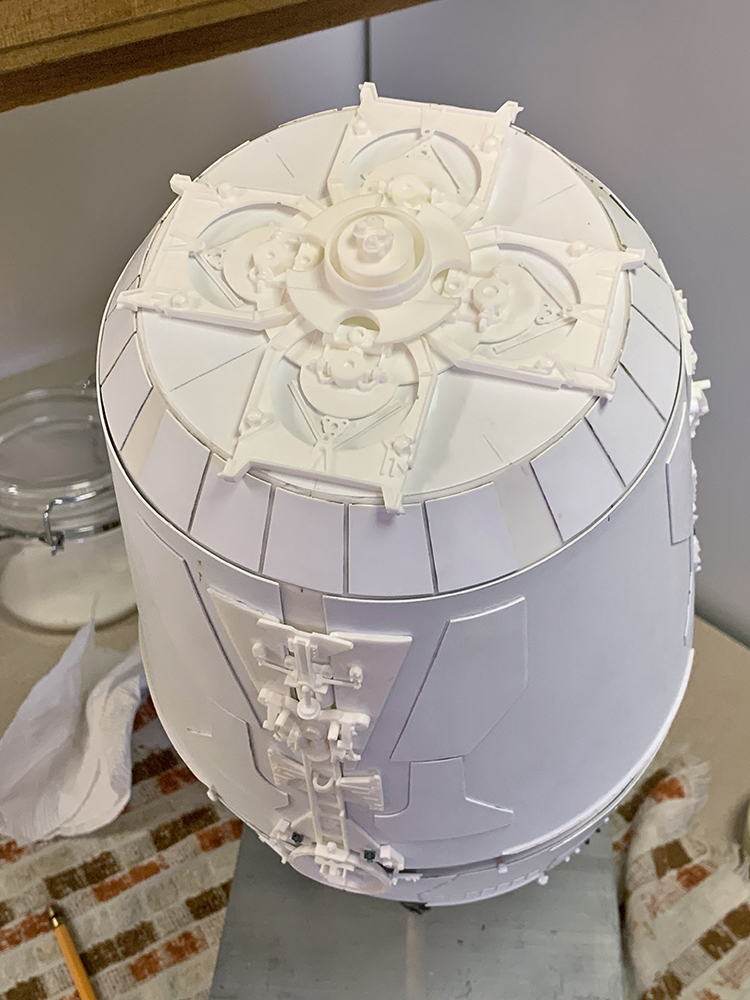 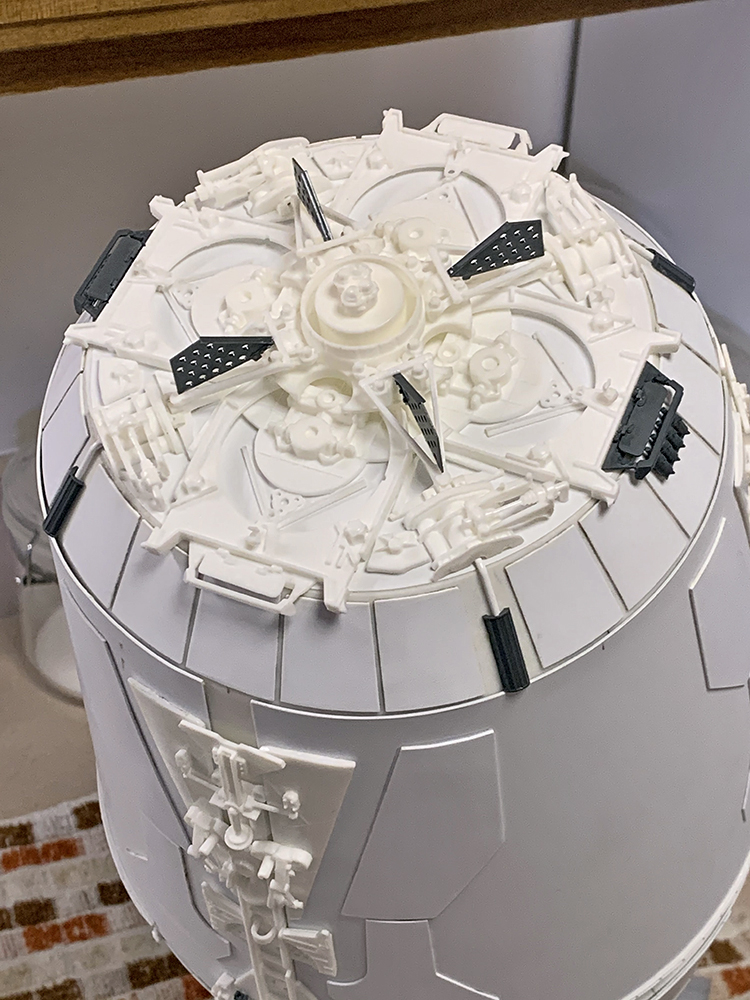 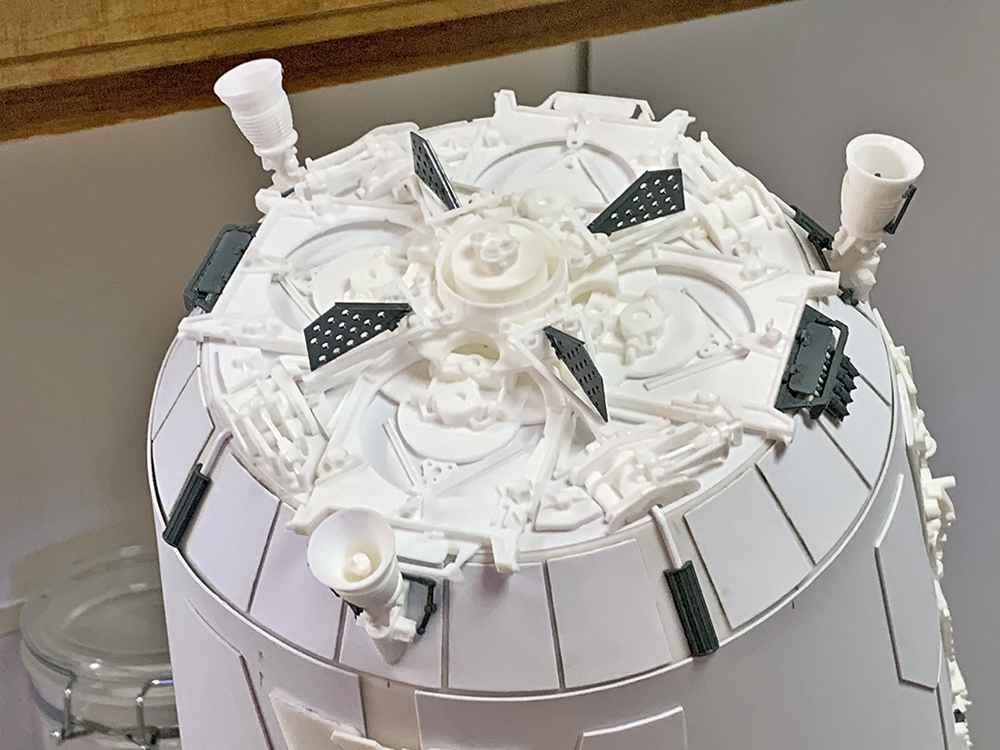 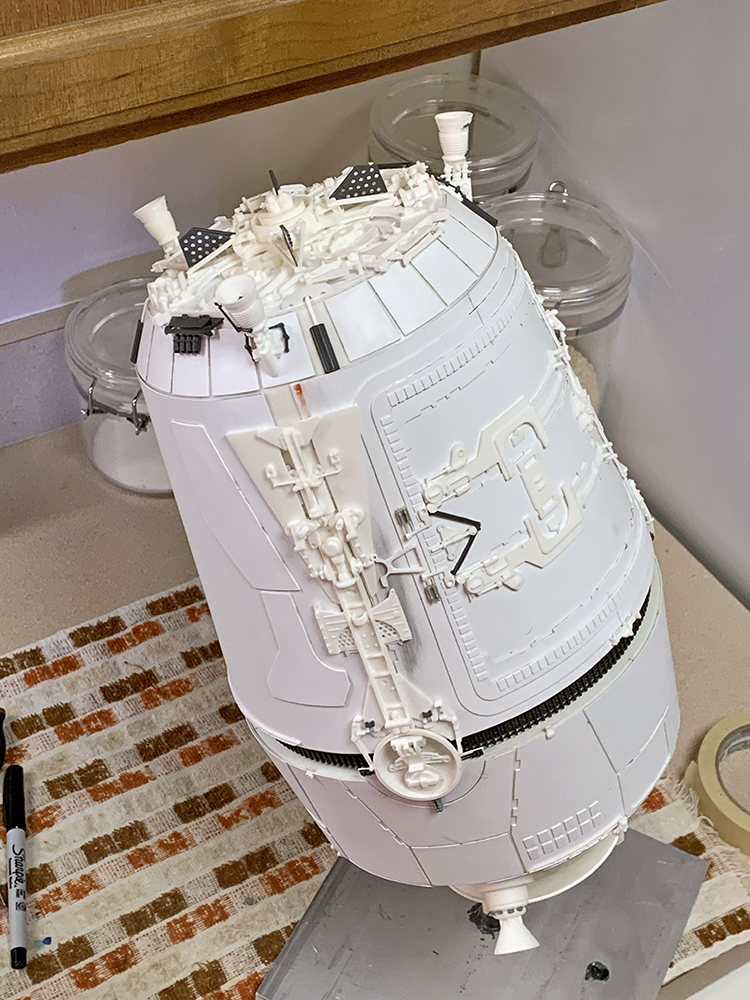 RPF PREMIUM MEMBER
When you're missing a small part and you make a replacement from scratch by shaping one from a piece of scrap styrene... 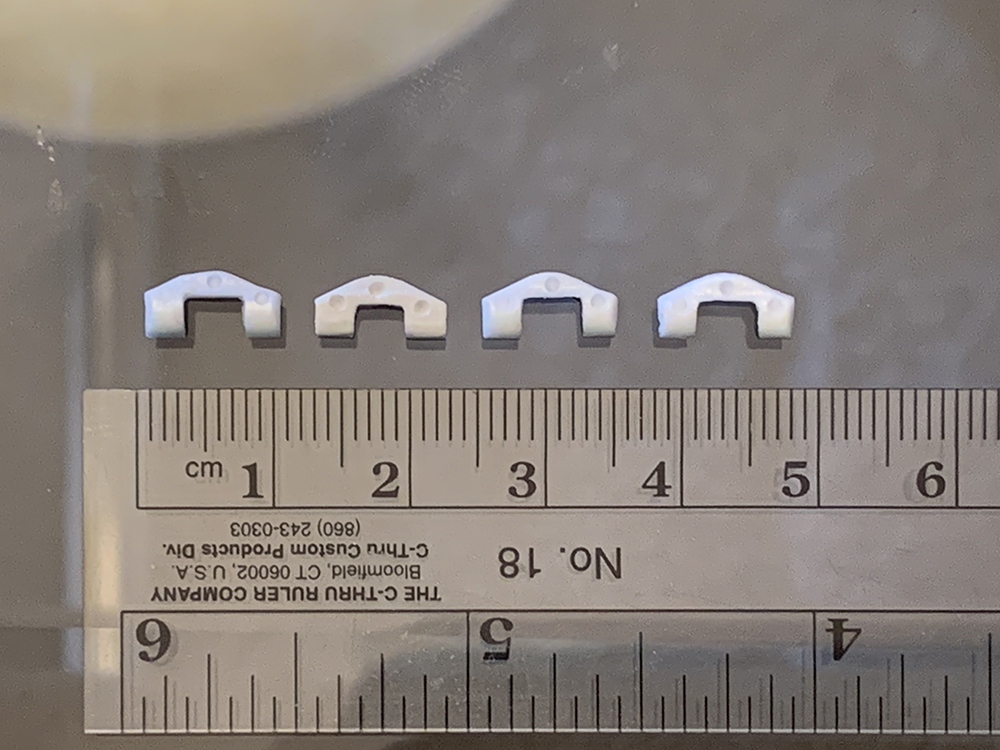 RPF PREMIUM MEMBER
So, I'm now moving on to getting the four main rocket motors built up and I finally just now noticed that the four truck rims that are placed as inserts into the Saturn V interstage nozzle extensions come in two different sizes (the silver ones I've indicated here in Jason's donor parts image and the cast pieces in my own image): 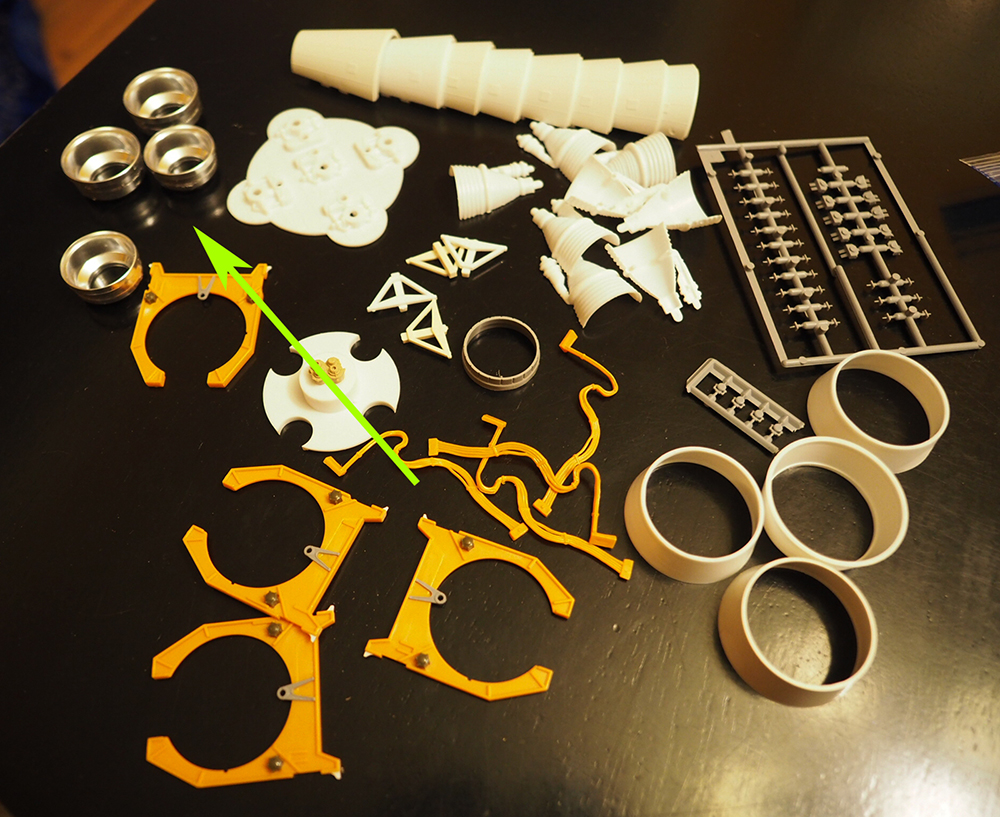 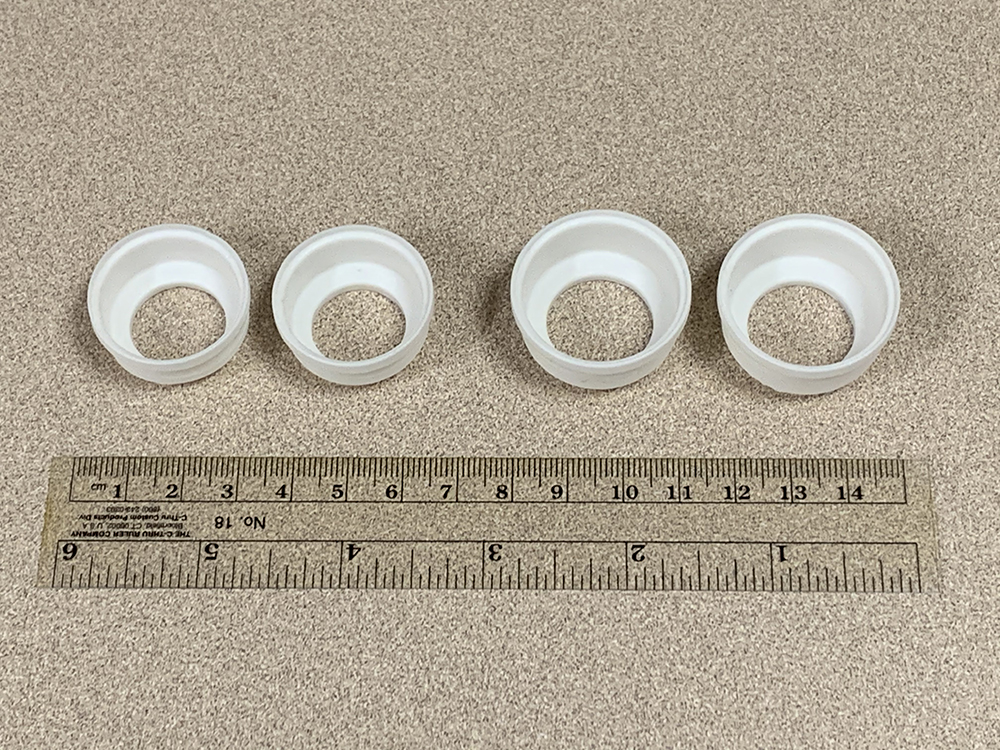 RPF PREMIUM MEMBER
That was an error we caught as they were being molded, d'oh! Don't use them. There should be four Phantom engine nozzles in there - same ones at the back of the X-Wing Engines. There seems to be something else going on too - I just printed a dished shape.

RPF PREMIUM MEMBER
Ah ha! Excellent - thanks for the pointer on that! I'll start searching for some Phantom engine nozzles.

I've enjoyed the heck out of this build process - SO satisfying to watch it all taking shape bit by bit. I'm so hooked on studio scale now!

RPF PREMIUM MEMBER
What is the source of those "dish" parts?

Also, 3D impact, I have heatsink castings I can send you if you PM me your address.

Studio Kitbash said:
What is the source of those "dish" parts?

Also, 3D impact, I have heatsink castings I can send you if you PM me your address.
Click to expand...

From Jason's post I take it that he 3D modeled and printed the dish-shaped parts. I have a hunch on a donor part from a kit that ILM used on other models and will give it a try as soon as I have my Phantom nozzles. If it works out I'll share.

Thanks - I did actually buy a bunch of the proper heat sinks fairly early on in the build process, anticipating finally getting to this point. Many thanks for the offer, though - much appreciate it!

RPF PREMIUM MEMBER
These look like the 'long' turkey feather versions from the F4. Is that right?

Jason - do you have dimensions or STL for the curved part? My pod is off with Andy for construction, but my 3D printer is sitting next to me. So I can't work out the dimensions myself.

That looks cool, I would say, it took you a lot of time to finish it. Well done, mate!

RPF PREMIUM MEMBER
Anyone know a good source for cast copies of the proper F4 nozzles? I'd rather not raid original donor kits for these if I don't have to...

RPF PREMIUM MEMBER
Ill check my stash of moulds. I think they are long ones.

RPF PREMIUM MEMBER
3DImpact, i have the mould for the long turkey feathers. If you need some just PM me and ill sort them out for you.

RPF PREMIUM MEMBER
This link should work for the part I grew to sit inside the turkey feathers and it's notched to hold the heat sinks!