Great update Luka! I love those blasters and adding those screws really add some realism to it. Can't wait to see more! I wonder if anybody else has motion control solutions I am also interested in that.

Great update Luka and thanks to Rich to have allowed you to do those casts and provided those grips also. Weaver knob is not the original one used in the movie, it's just the slotted screw that was used...as for the policeman gun, it's all in black including the grip (which is easy to cast then). Eager to see the rest!

This is absolutely amazing! So glad I finally saw it. Eagerly awaiting any progress and the next production diary.

FINALLY! We're making the movie AGAIN!!!!!!! thumbsup:thumbsup
Past two months were so busy with work that we couldn't work on film at all, but now we managed to get two weeks off and we're back in business!

So, the plan was that the next thing we film is the toilet scene, but winter decided that it is not over yet and this week we got tons of snow and very cold weather. The toilet set is built in my shed, so basically it's outside, with no heating. So we figured, let's leave that for next month, and do something else now.

There is a really small scene at a noodle bar, and that seemed perfect for our two week break.
We decided we will film it inside in our studio, so the main thing to do was to BUILD THE NOODLE BAR! And which other than our beloved "White Dragon", of course. The idea being that there is a whole chain of those fast food restaurants, so this is just one of them. 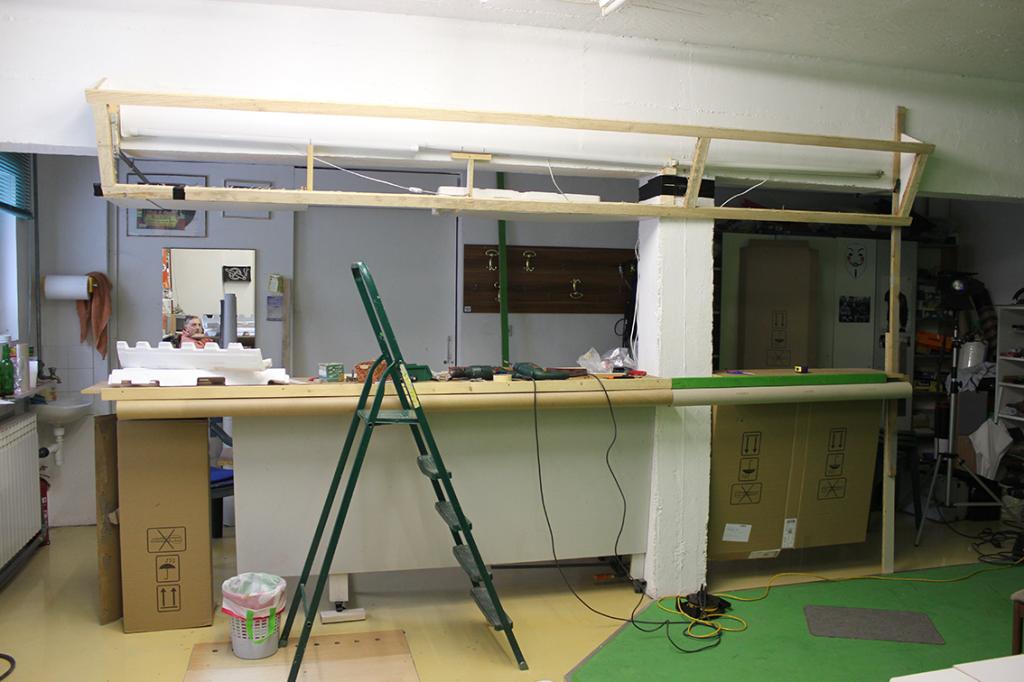 So, in the last two days I've been making the main frame of the Noodle bar with the help from my father who is reflected in the mirror.
I've been collecting and saving interesting styrofoam pieces for years now, knowing they will come in handy one day. In the next photo you can see them on the pillar, but eventually they will be glued on most of the corners. 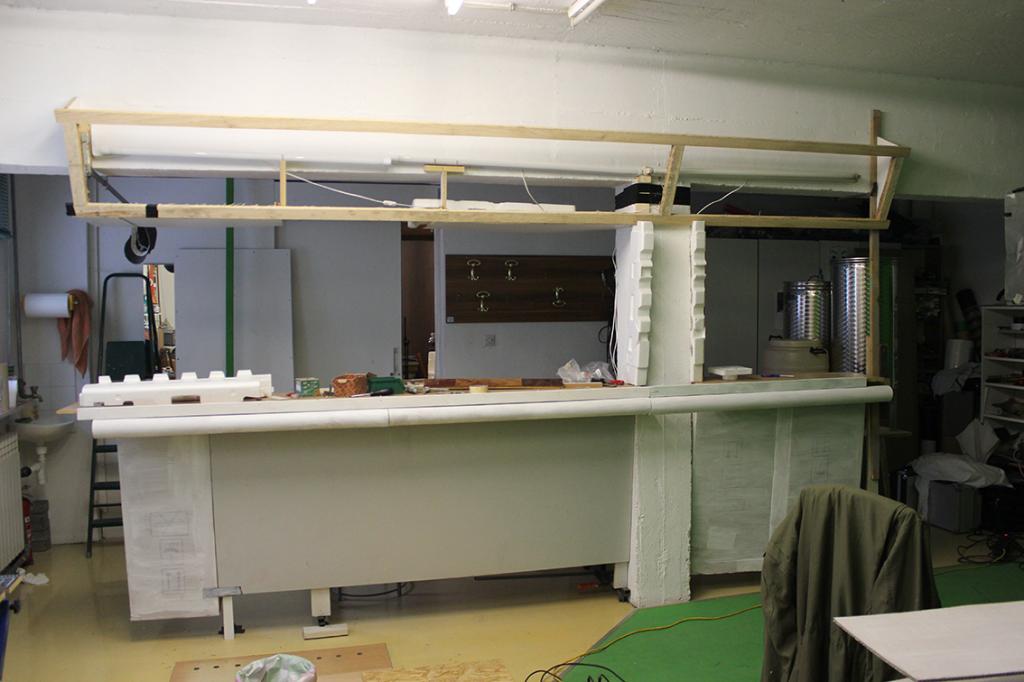 We've installed some lights to the top where the signs will come. Those big lights in the back are still temporary. They are supposed to to be some kind of illuminated shelves with tons of bottles and stuff ... we'll arrange it in the next few days.. 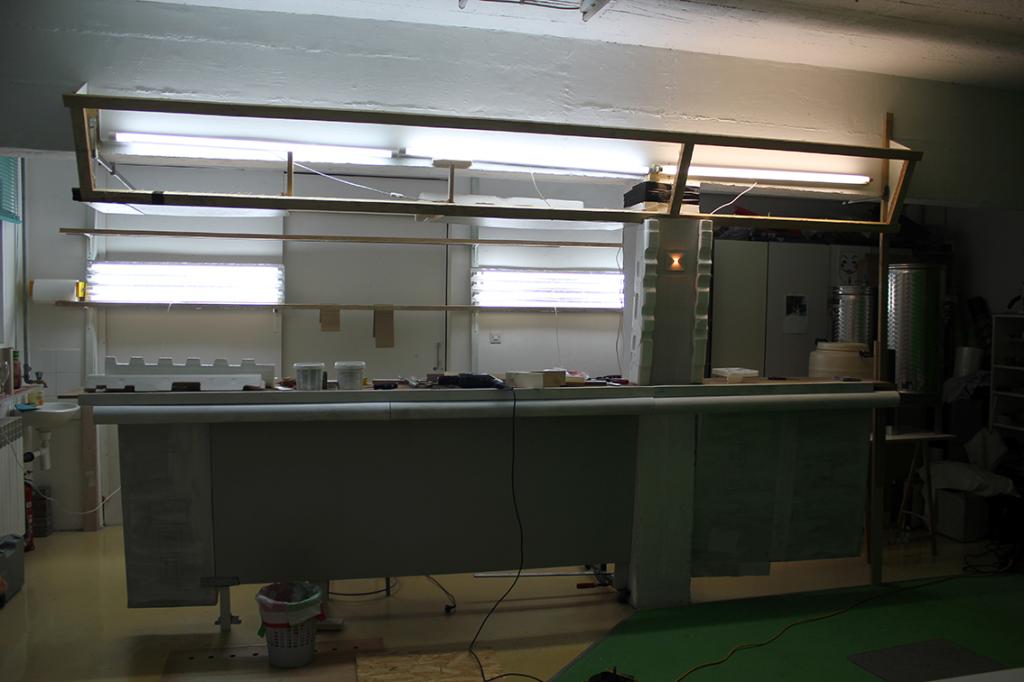 I've recreated the signs from the original White dragon noodle bar, and I must admit I've had some fun searching for the most horrible dishes I could find. :lol

My friend will print them tomorrow and they will be glued in these cardboard frames: 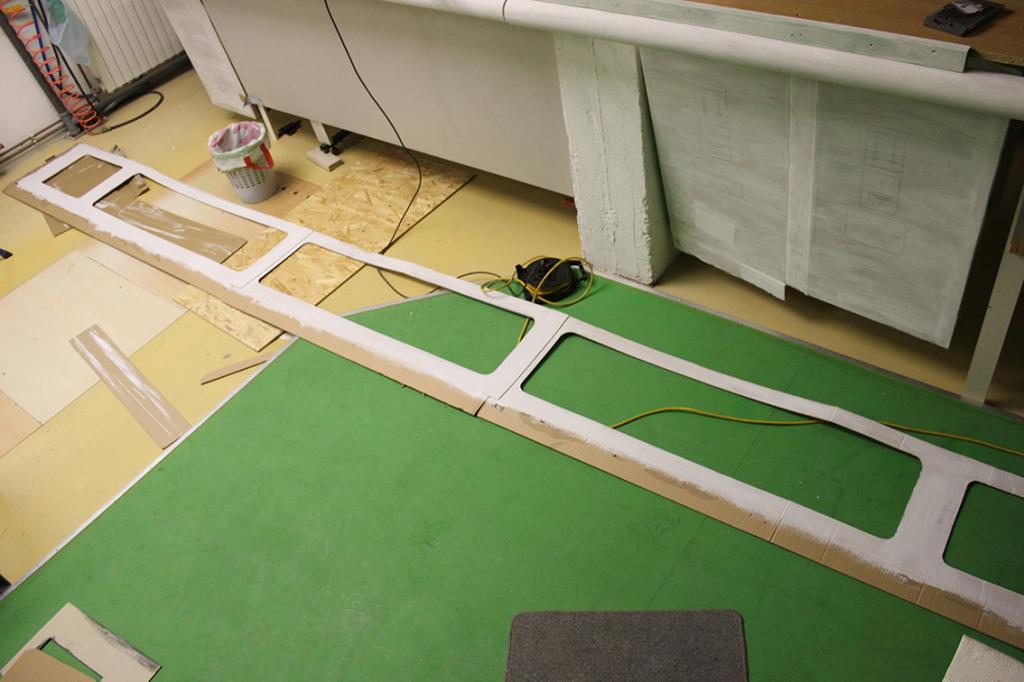 That's about what I've done so far. Maybe it doesn't look that realistic in this light, especially since you can see the rest of the room all around. But we feel it will be mofo when properly lit, with set dressing, actors, steam, fog.. Here's a quick photo framed similarly how it will be in the film: 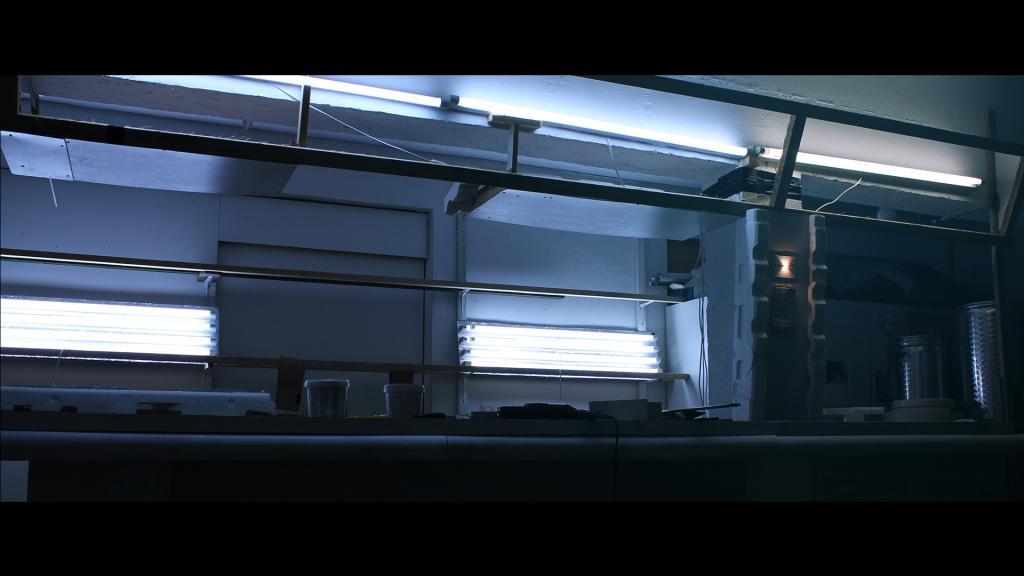 And a panorama of the whole room:

Tomorrow Dino and me are going to IKEA to buy some cheap bowls and stuff to scatter around the bar.

Expect frequent updates in the next week - simply because we are on the clock! :lol

It's good to be back! :cheers

I love every update!

Every time I got to the local Chinese fast food restaurant, I fantasize about owning my own Asian restaurant, and decorating it like the noodle bar... I should probably play the lottery more often.

I could have sworn I had the "White Dragon" logo around here somewhere. Maybe I saw it in the five disc set somewhere...

Best I can do is this drawing of the dragon neon sign: https://gndn.wordpress.com/tag/blade-runner/

Your noodle bar looks pretty deep... the movie one seemed pretty shallow to me. Attached is a drawing from the art book...

Awesome. This project is inspiring.

RPF PREMIUM MEMBER
Finally! Great to see you guys back on the track! :thumbsup The lighting on your photos makes even the unpainted styrofoam look great. :lol

So glad this is back on track.
I´m a super fan of this project.
A

I'm gonna tell you right now, if you guys release this as a DVD, I will definitely buy it from you.

14 pages of craziness.....which I just read through. Can't believe I never checked out this project before. Like watching the best making of feature on a DVD.
Being a video editor myself, I can say I know how crazy this all is. Can't wait to see more.

Hey! Thank you ALL for your awesome comments!
You can be sure we'll release this as a DVD one beautiful day, with tons of bonus features. And it makes me really happy to think it will find its way to you guys!

OK, so the signs were printed yesterday. I cut them to size and glued them in their place. 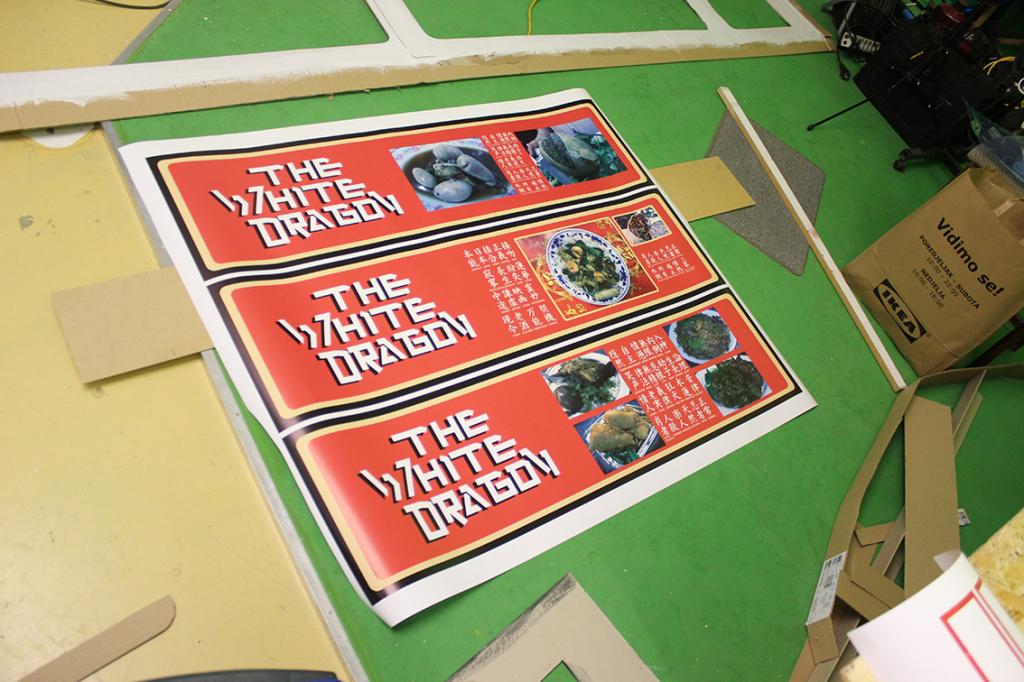 As planned we also went to IKEA and bought some cheap mugs, bowls and other stuff that looked like it could fit at the noodle bar. 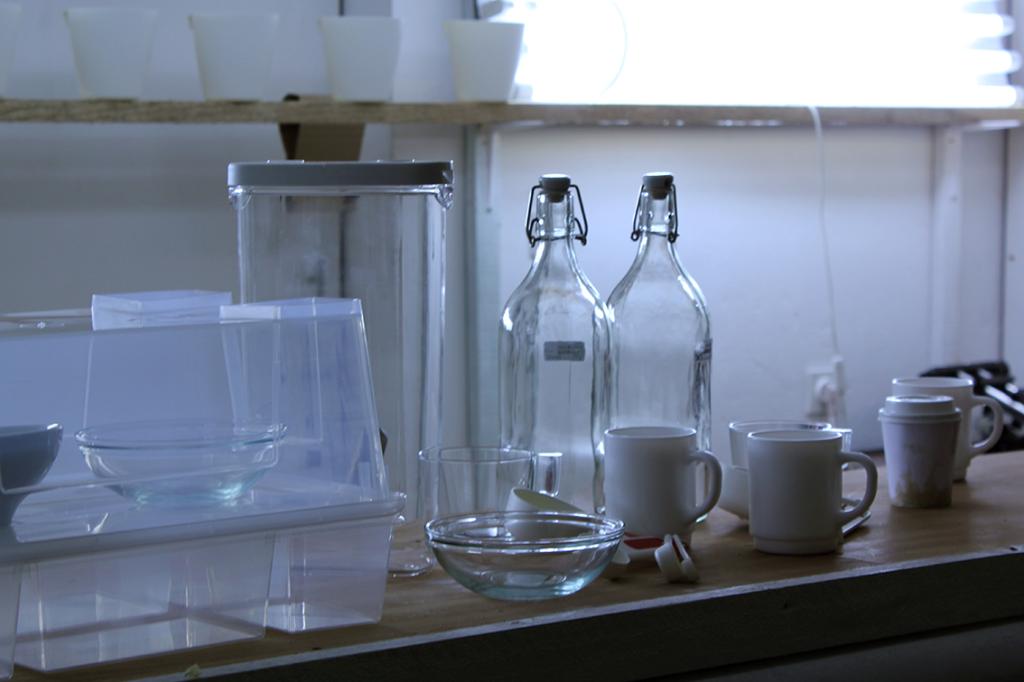 Here's another quick test, this time with a couple of friends that came over. There's still much to do, but it's starting to come together. 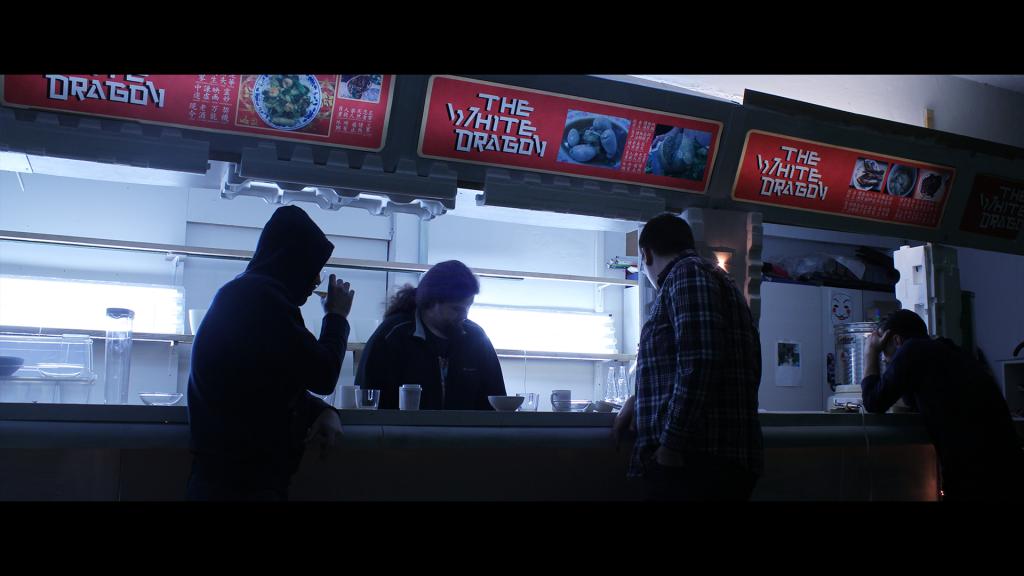 And here's another panorama:

That back wall is still empty for now, we'll hang a lot of dishes, frying pans and stuff there.

OK, see you tomorrow and thanks for following our progress!! ninja
Last edited: Sep 10, 2017

Good to see you back! Of course, when you're doing a wide shot you need more props and stuff to add into your set. As for me, I prefer a mid shot but busy with Soya sauce bottles, boxes of rice, noodles, etc. (less expensive that way) Keep up the great work!

RPF PREMIUM MEMBER
You know, if you know somebody who can vacuform, you could use those styrofoam pieces as vacuform masters, and crank out as many pieces as you needed...
A

Mike J. said:
You know, if you know somebody who can vacuform, you could use those styrofoam pieces as vacuform masters, and crank out as many pieces as you needed...
Click to expand...

Would styrofoam hold up to vac-forming? Lots of heat and pressure... I would expect it to maybe melt... or at least deform.

Thanks for your comments, guys..
Unfortunately I don't know anybody who can vacuform, so all I got as my building material is styrofoam. :lol But it's ok since we had exactly enough for the whole set.

Today we started to decorate the set with dishes, bottles and frying pans that we had in our kitchens. We used literally everything that could be of use. 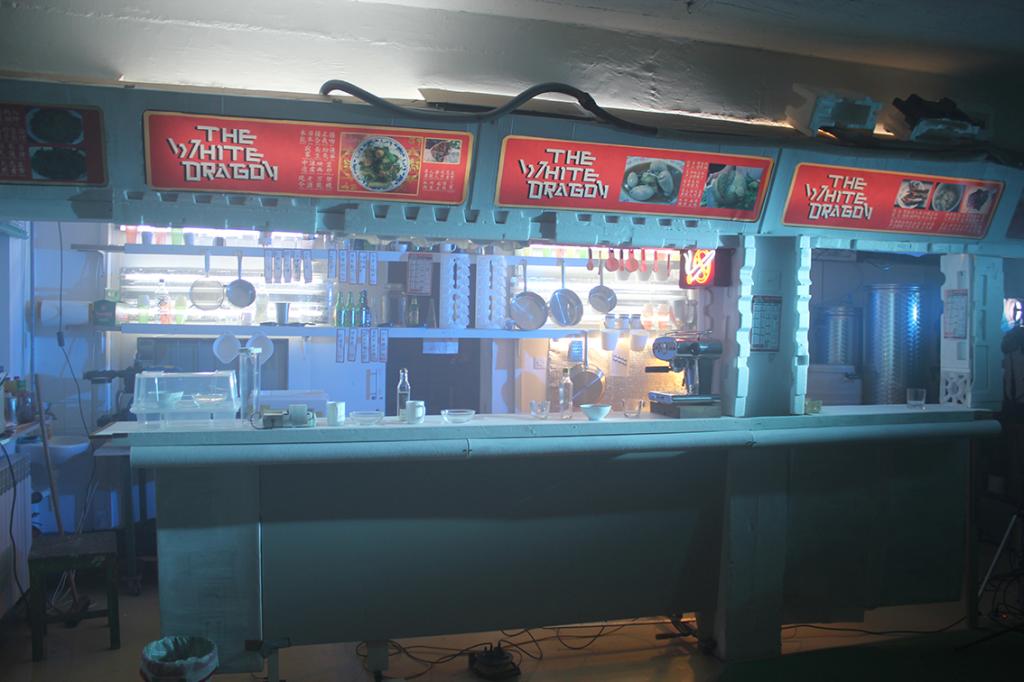 We also stuck lots of labels around where we tried to copy some kanji lettering, mostly about food. I REALLY hope it will be out of focus in the background, and unreadable, because people who know that alphabet will get a good laugh otherwise... :lol 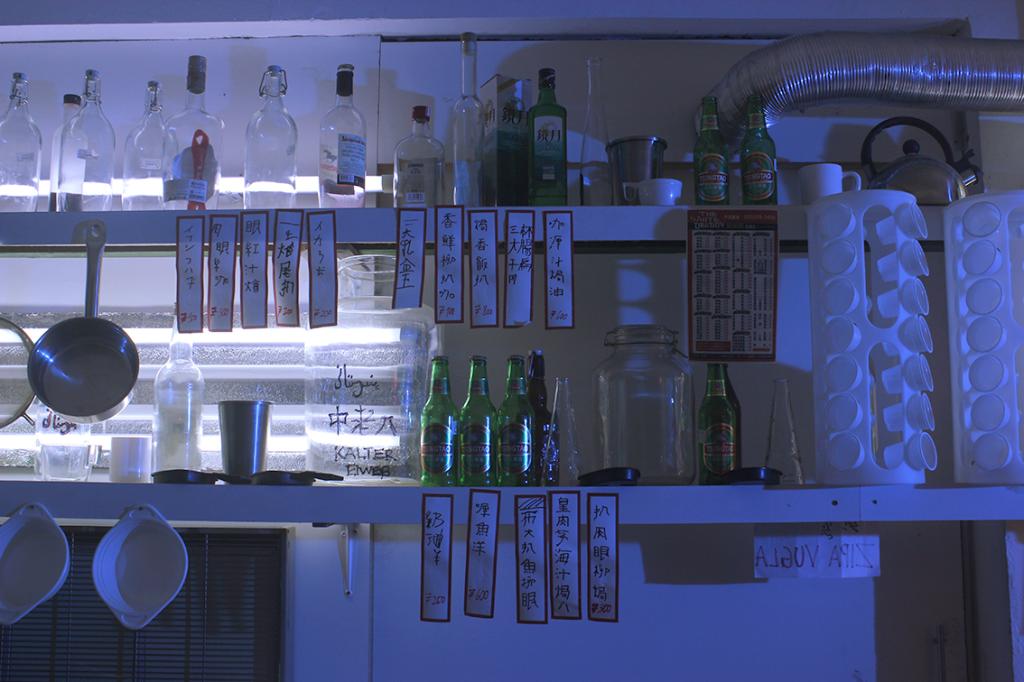 In the evening our DOP Dino started to experiment with lighting, and we puffed some fog in the room.. There's still many details and props missing, mostly food. We have tomorrow to buy that stuff, and to tackle the costumes. Here's the panorama from today:

We also shot a couple of test shots to see how it looks in camera. I repeat, the set is not yet 100% finished, many props are missing, and most importantly there is no extras in costumes which will give life to the scene.

Today we shot another test. You can see that I opened the shot at the top, and there's the city behind the bar. We thought of that just today after we shot the test, and it made us really happy since it immediately doesn't feel like a room anymore. 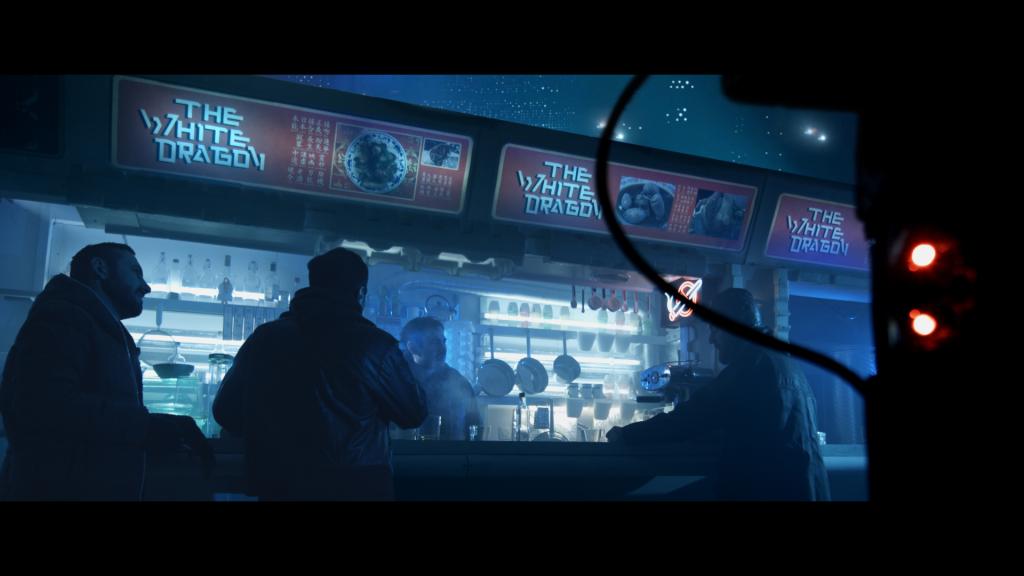 This is really a huge learning experience, and we are constantly encountering millions of problems that need to be solved which is tough but cool! Hope you like the look of it!

We film this scene the day after tomorrow. I'll be in touch, and you keep your fingers crossed!
Last edited: Sep 10, 2017

Are you gonna put any fluid in the bottles back there? Maybe just some colored soda?

Seriously though, would love to see a small breakdown on how you guys handle lighting. It seems we never really get it right on our shorts so any tips would be helpful.
A

Yeah, +1 for wanting details about lighting. It's a subject I've been extra interested in lately and you guys seem to have it nailed.