Community Staff
RPF PREMIUM MEMBER
Oh man, sorry to hear about your troubles! You work with what you've got, right?

But thanks for the update and, like Mike J. said it, that helmet is looking good! :thumbsup

Your box is too big for your vacu-form, you should make it thinner (almost half size of what you have now). Your plastic seems fine...maybe a few seconds more into the oven and it could be fine. Love the clay sculpt!

No progress on vacuum forming, and I'm still waiting on that silicone, but here's an exciting update nonetheless!
Today my friend who is a fashion designer started work on a street cop costume!
Here's some pictures: 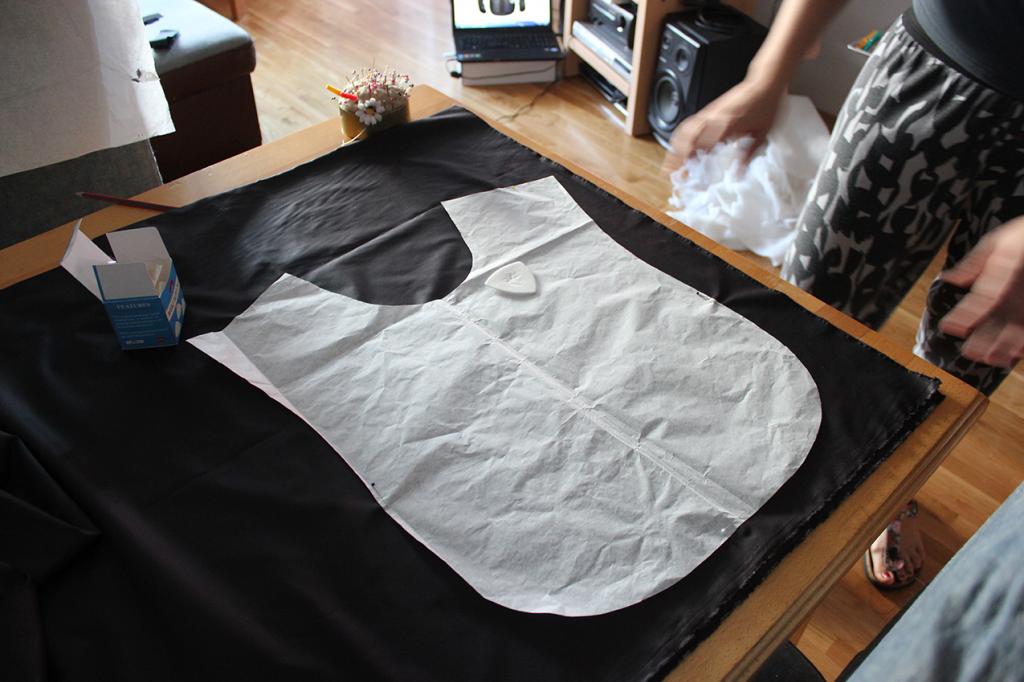 She started with the vest. I drew the plans in 1:1 scale to help her with the measures. We slightly changed it though so it would fit our actor better. 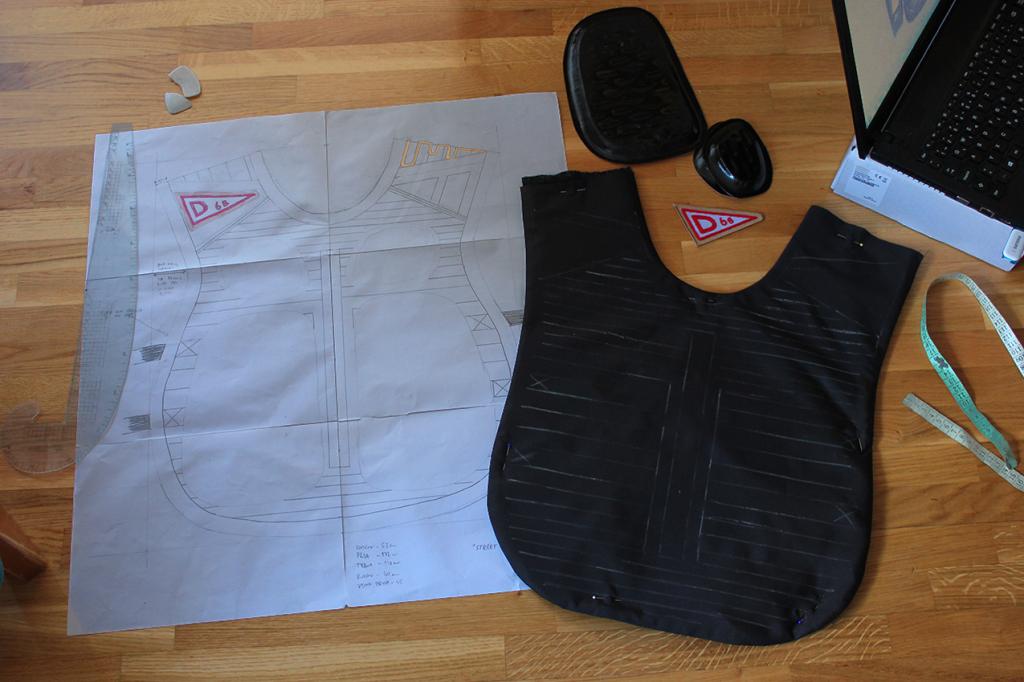 Then she had to sew all those parallel lines - twice - for the front and back side.. 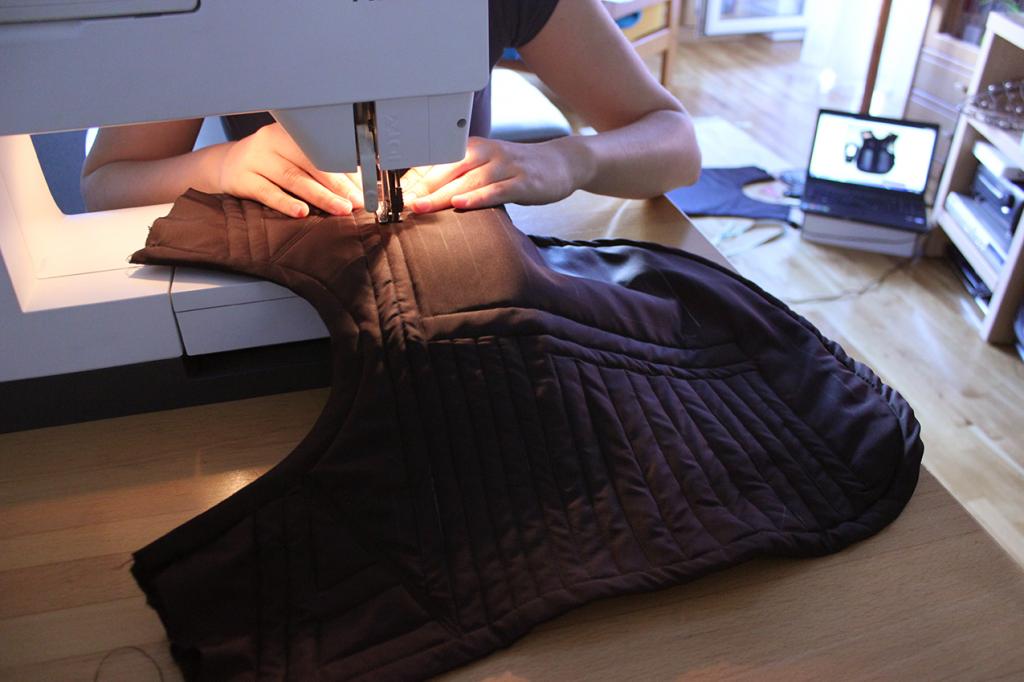 And here's the finished vest. These vac-pulls we used just for reference and I'll attach new ones to the vest when I make better ones. 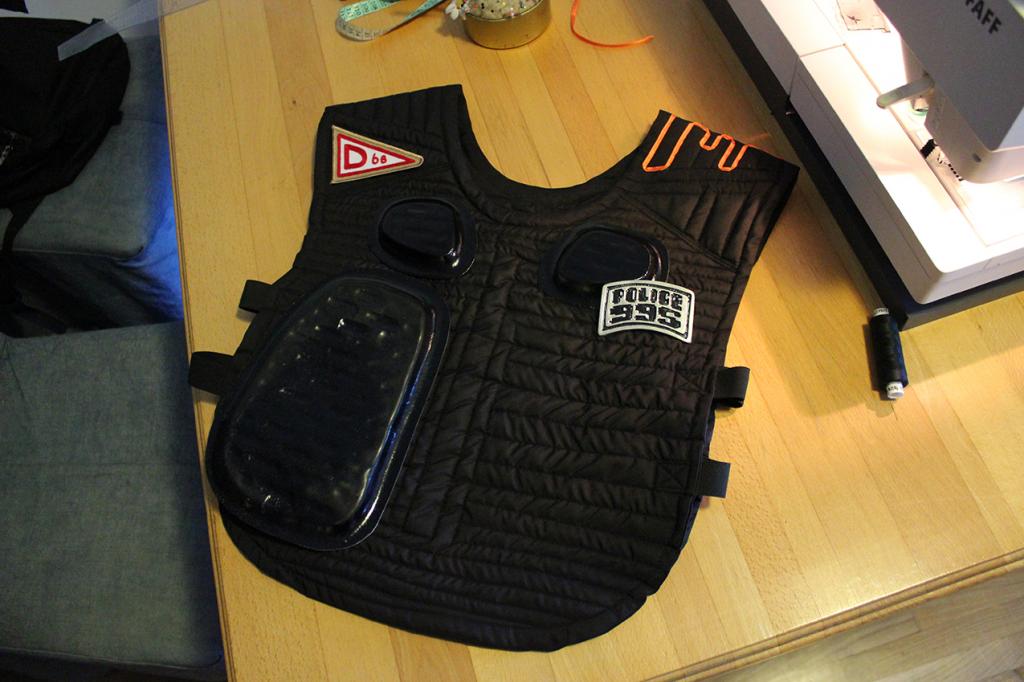 I'm really happy with how it turned out, and can't wait to see the whole costume finished!!!
:cheers
Last edited: Sep 10, 2017

Very good work on that vest (and that helmet rocks,btw)

LukaFilm said:
And here's the finished vest. These vac-pulls we used just for reference and I'll attach new ones to the vest when/if I make better ones.
Click to expand...

thorst said:
I think you can resolve the vacuform problem by drilling holes into the master plug through the part, such that the vacuum can pull the plastic into the openings better. You won't get a better resut with better materials, if the force generated by the vacuum has no chance to come to the points where it is needed.

And for the silicone: Have you tried to talk with your dentist? He might have access to these kind of things - or knows technicians who do so.

Yes, this too is very important. In the edges of the recessed details. It is coming along great by the way

thorst said:
I think you can resolve the vacuform problem by drilling holes into the master plug through the part, such that the vacuum can pull the plastic into the openings better. You won't get a better resut with better materials, if the force generated by the vacuum has no chance to come to the points where it is needed.

And it looks like your "bucks" are not lifted up so that air can flow under the buck. You just need to add a little hight under the buck for it to work better. You could add just a few coins to lift them up and that will make the air flow under and make a tighter pull.
When i heat my plastic i need it to sag before i pull it out (sounds like a dirty phrase) Just an inch or 2 .
I don't know if you know about this website but it helped me alot when i first started vacuumforming .

try drilling out more holes in your vacuum box
M

Any updates? I am eager to see progress!

This has to be the coolest thread ever. It is really inspirational for new model makers. Any updates?

Ha,ha.. Thank you so much for your interest guys!!! It really makes our work worthwhile..
I'm sorry for rare updates, but job gets in the way and this damn weeks go by so fast! :behave

But anyway, today I have something different for you: "Production diary No.3" about filming the commercial for our cigarettes!!!

The ad will be featured in the movie, and (as well as the cigarettes) is important part of the story.

Figuring out the style for the ad was really hard. We wanted it to feature a beautiful woman, and obviously we wanted it to feel very 80's, but at the same time it had to fit with the rest of the movie, and feel like it's the part of the same universe.
We watched many 80's commercials, and all ads from Blade Runner that we could find across the web, especially those geisha ads.. The 80's ads were visually too rich, and BR ads were too poor for our needs (because they obviously did not have much time and money to make them), but we somehow blended best of both worlds together.
So, we did a couple of tests some time ago and decided we will use some kind of sea setting to contrast the coldness of BR universe, but soon we realized that palms and sand don't fit too good because those elements are too warm. The water/sea by itself is a good neutral element. So we settled on a bit colder visuals, and artificial pool in the front with large sea in the background.

But, enough of my blabber, here's the video:


It is also worth noting that I stumbled on this picture a couple of years ago and I always thought that this swimsuit is so mofo: 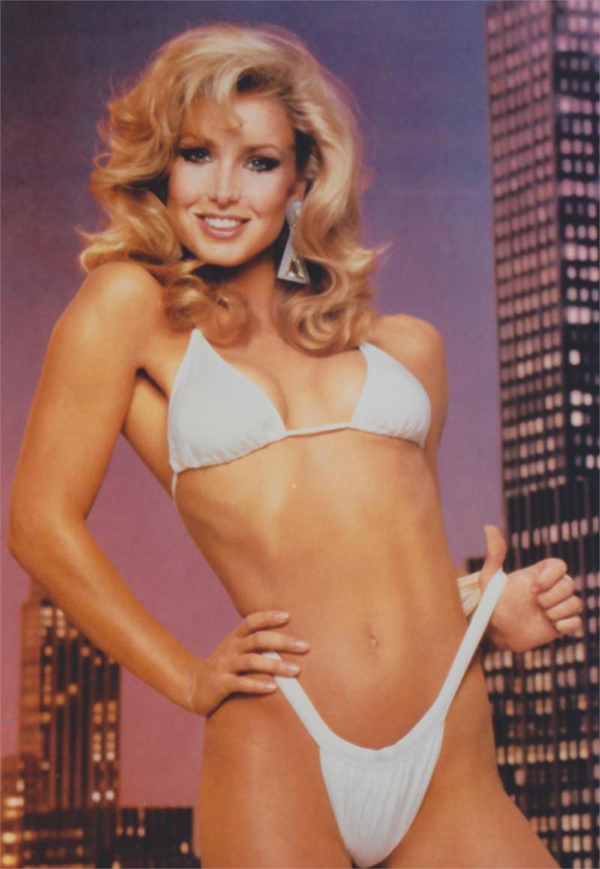 And naturally, we wanted this exact bikini in our film, but you can't buy that anywhere.. So my fashion designer friend made us the exact replica of that bikini! (is that the first replica of a bikini on RPF maybe?) :lol

The shooting of the commercial lasted for about 14 hours.. Here are Anton and Dino filming some of last shots very late in the night: 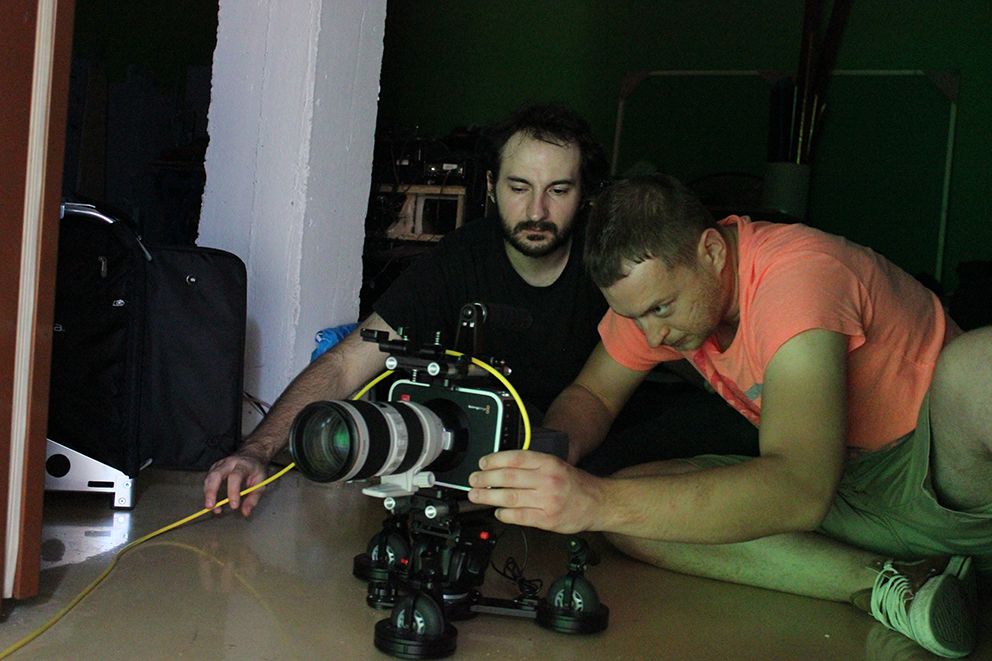 By that point I had a couple of glasses of wine so I was of no use anymore.. What can I say.. making movies is a stressful business.

That's about it for now.. I must upgrade my computer during the next month so I could start compositing the ad.. I bought this pc two years ago and now it's barely coping with 4K resolution, so I'll need a new motherboard, processor, SSD discs and other expensive stuff that I don't know that much about.

So until then here's one teaser frame for you guys, and a salutation from Slice team! :thumbsup 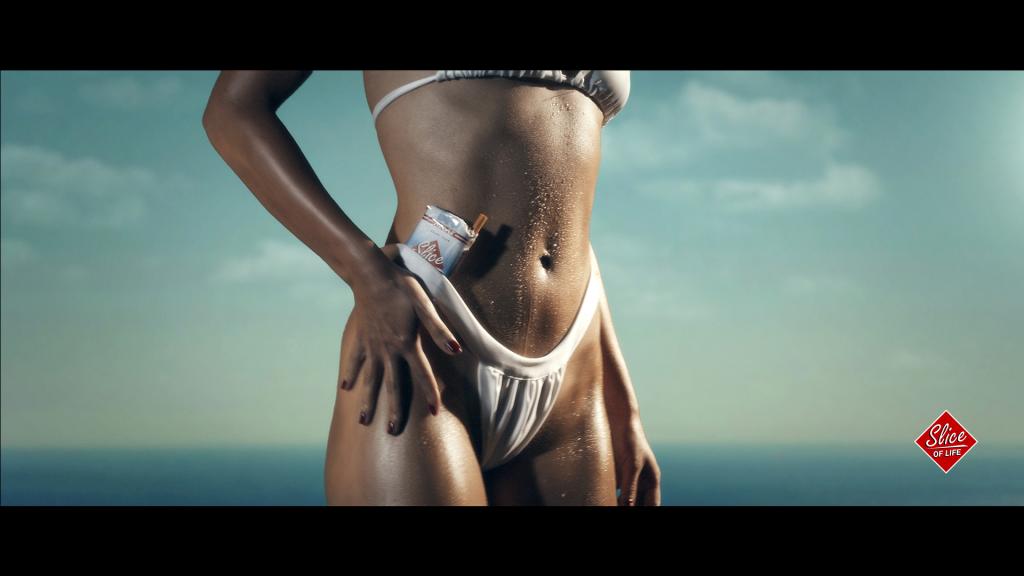 Best update evar! I like how you included the BR font on the cigarettes. The design on the packaging is awesome.

RPF PREMIUM MEMBER
I like your self-lighting cigarette gag

To paraphrase another sci-fi classic, "Slice of Life cigarettes are people! It's people!"

I love the way you're getting all those little details to another level! Great production for sure; keep up the excellent work:cool

With your attention to detail and crafting of so much elements in the Blade Runner universe style I slowly start wondering when the first real life replicant will leave your workshop!

Keep up the great work! :thumbsup

Community Staff
RPF PREMIUM MEMBER
Yey for 80's bikinis! Love the little pool you build. Again, thanks for taking the time to give us these production diaries.
T

It is getting better and better.