Looking good already...it's always trials and errors for dressing the set, but so far, as you said, there are a few props/set pieces missing. Hope to see them in the next pics

It's morning here and today we film the scene!
Nobody arrived yet so I took some time to post a couple of photos here.

The set is 99% done. We went to some china store and found a couple of traditional decorations that filled some ugly holes in the set.
Only food is missing now, but that's still in the fridge to avoid unnecessary smells. 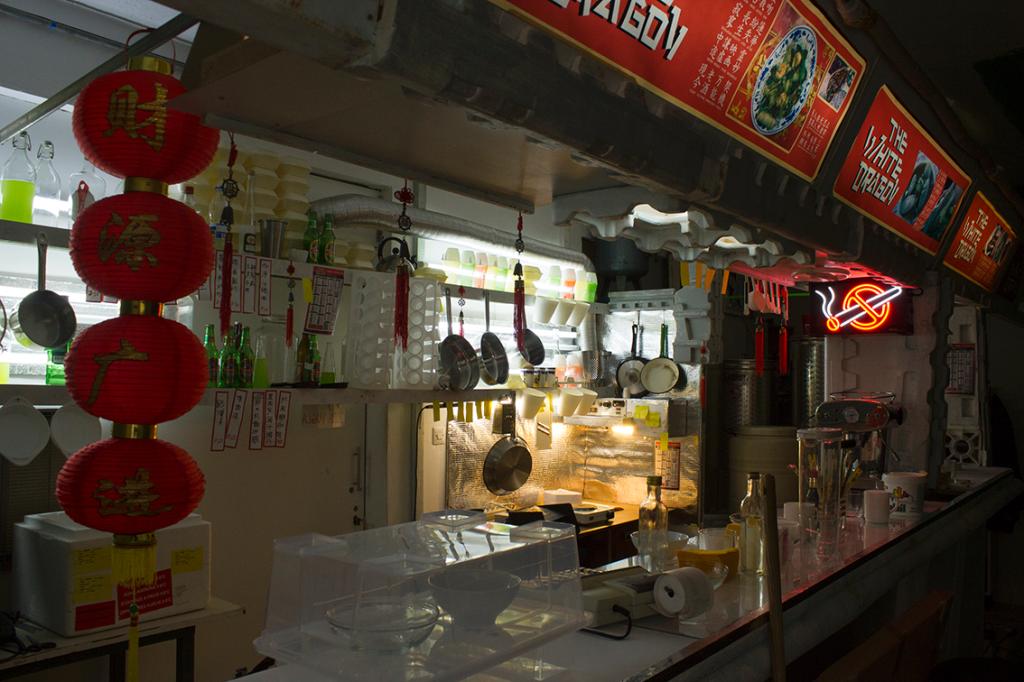 Thanks for your interest about the lighting! In the next few days I'll post another production video about the noodle bar, and we'll definitely say something about light.
So, I'm off to the studio! I hope today goes well!

Oh, and don't worry - chopsticks and soy sauce are in their place :lol 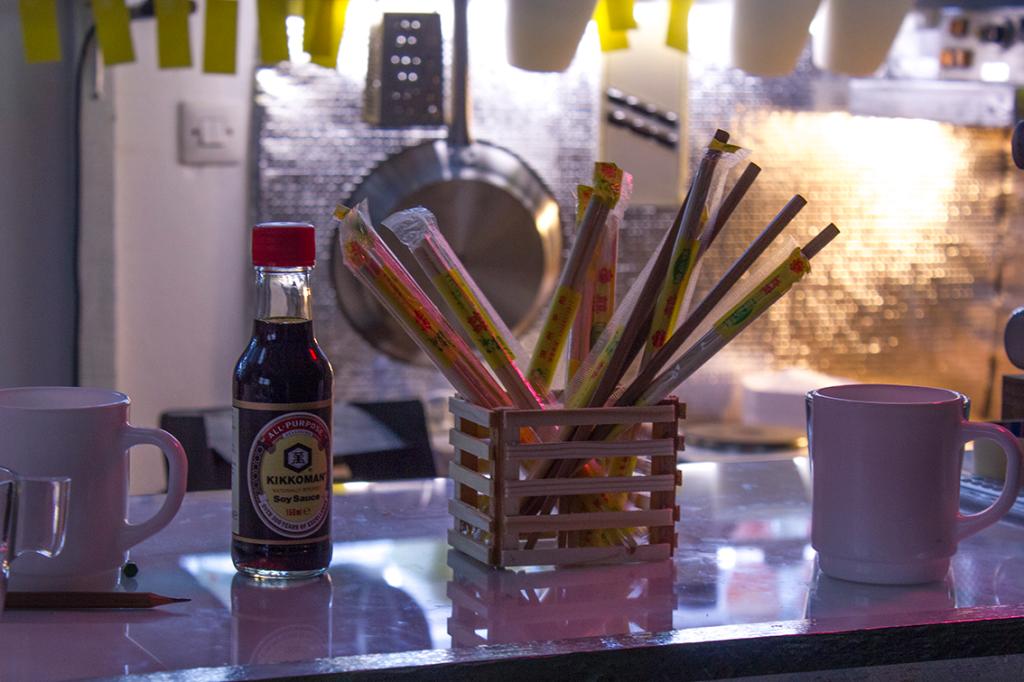 Filming of the "noodle bar" scene is officially over!!!

It took us two days to film it: first day for the main stuff, second one for the close-ups and pickups...
We shot about 10 shots, and the scene will be 30 seconds long. I know, right? A week of building, two days of filming, and you get 30 sec... But that's how it is! 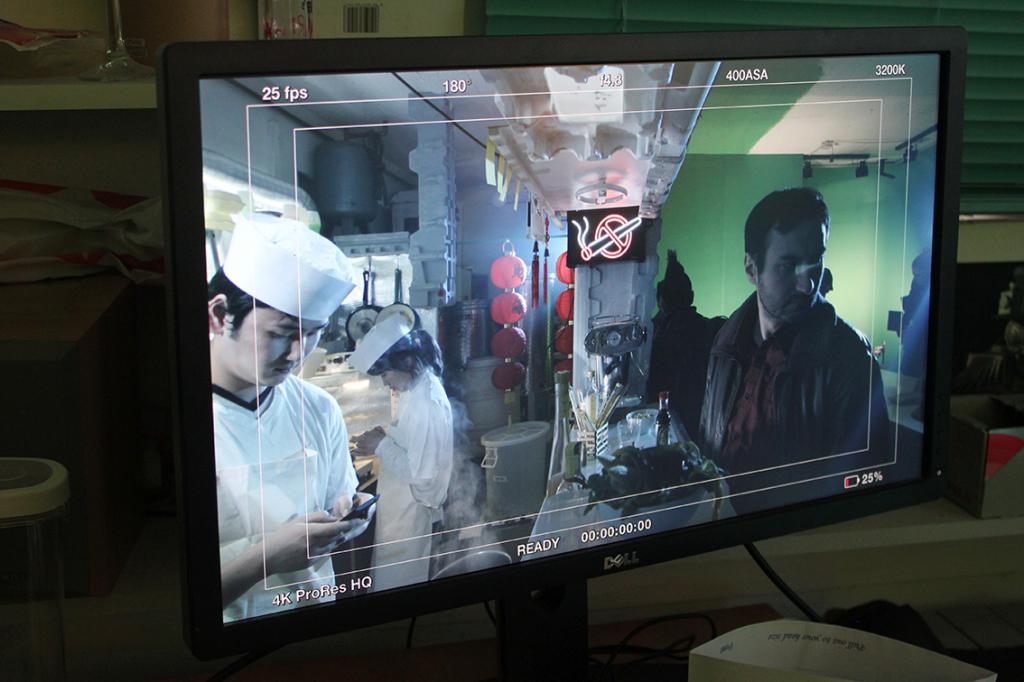 We hired two Chinese extras from the casting agency to be employees of the White dragon noodle bar. There is not that many Chinese people in Croatia and none of us have any Chinese friends who could have taken that roles. They were really cool, they live here and know croatian pretty well. They never saw Blade runner though, we asked.
Other extras were just our friends dressed in weird costumes, and with weird hairstyles. 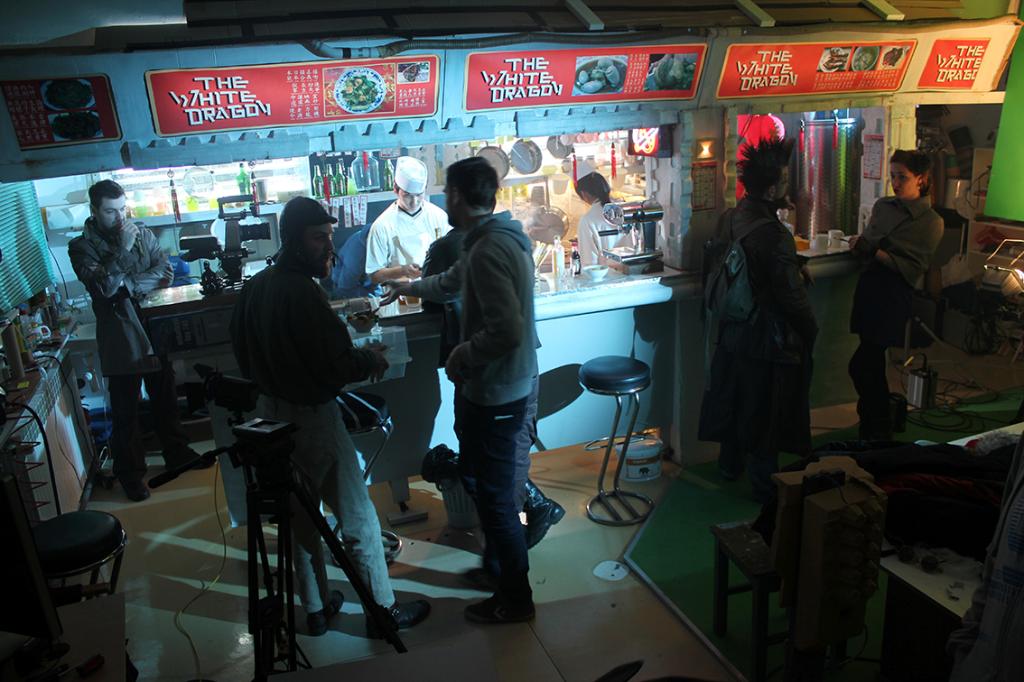 Anton, our leading actor arranged these beautiful fish dishes. He was the only one that had the stomach to do it. :lol 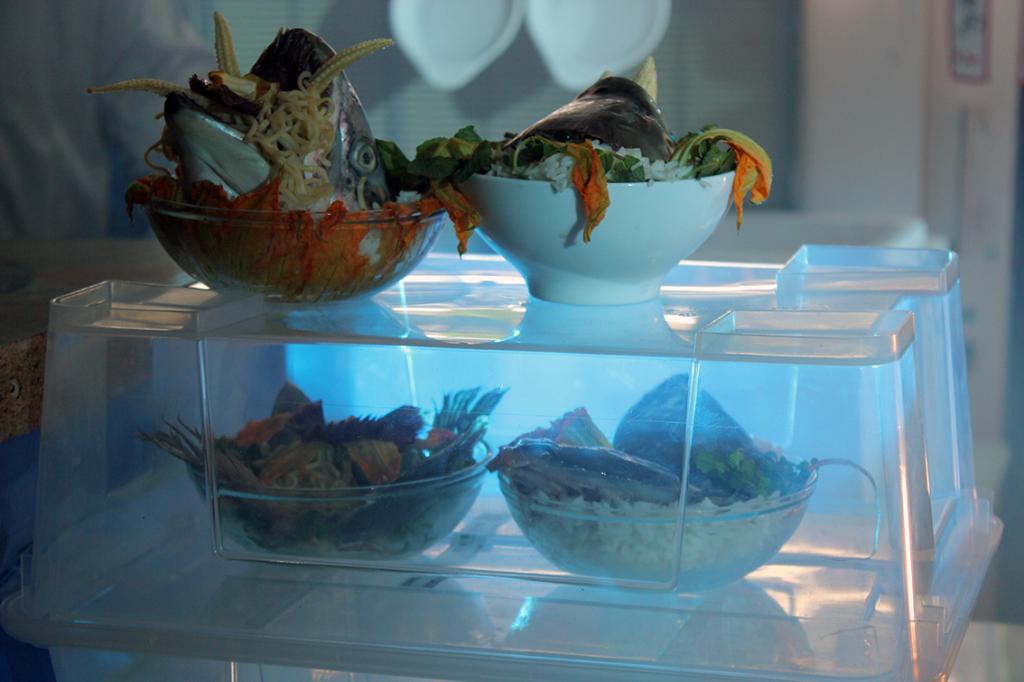 It was cool to sit at the bar, and at some points it really did feel pretty realistic. I even had a cameo role of a taxi driver eating noodles at the bar. Lucky me! :lol 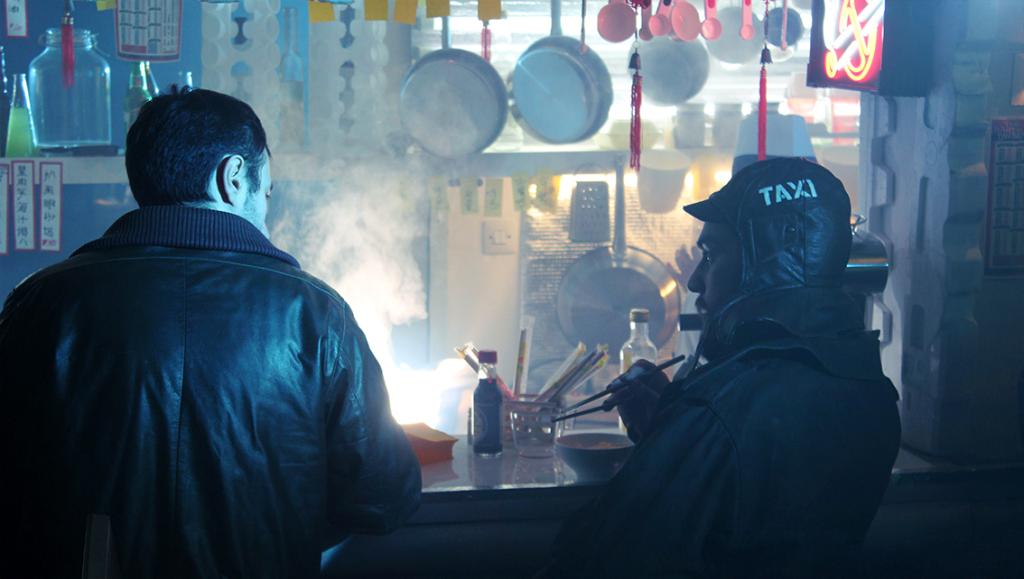 I quickly composited the city in the background to show you how it will look. I do have a couple more ideas for that shot that I will try and we still need to film a proper background, but that's pretty close to how it will look in the finished film. 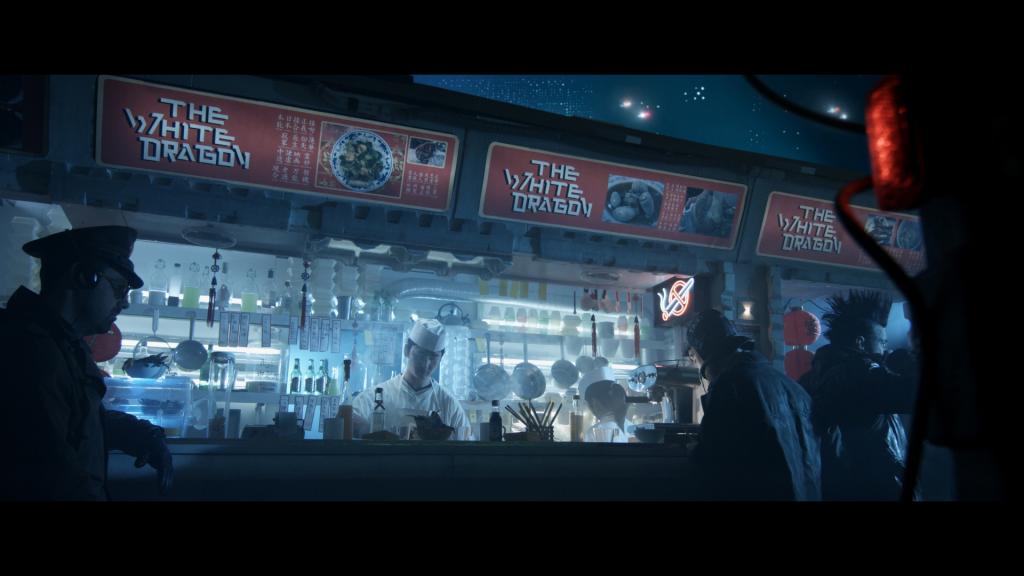 So that's it for the noodle bar, I hope we'll be off to the toilet scene next. Oh, I will post a new production diary soon, but I need a day or two to edit it.

Thanks for following our progress, and see you soon!!! 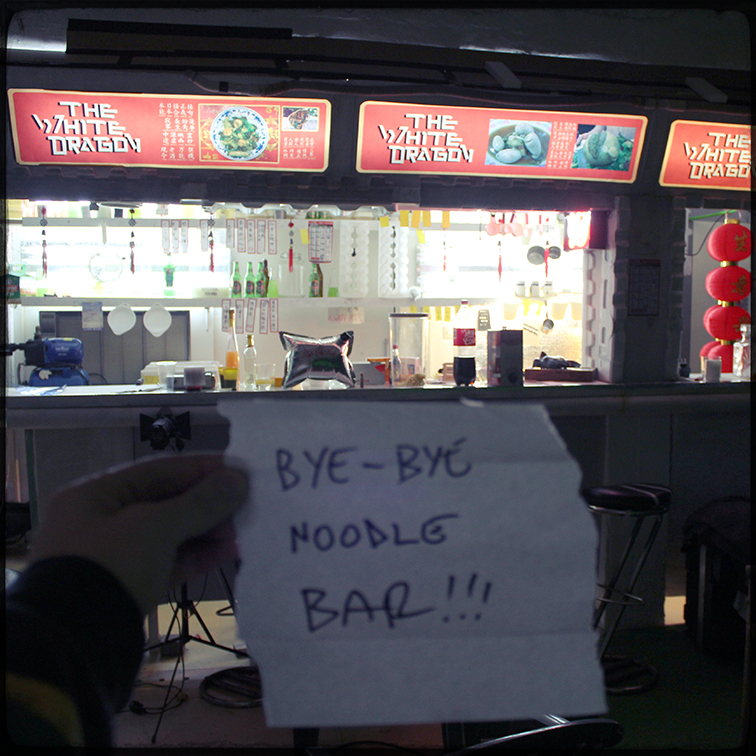 The bar looks great and the food looks gross

You know, its so sad when you finally finish a major project like this and its done....and the fact that after all the work that its only 15 minutes. But we all know its going to be a pretty awesome 15 mins.
A


(I want that to be all in caps, for emphasis on just how outstanding I think it is, but the board won't seem to let me do that. So, read that as a loud shout of praise.)

Can't wait to see more from you!

Love it and love the fact that you took your time to make it look great (blood, sweat and tears: the only way) The whole comp looks really great and the ambiance is spot on:cool
So long Sushi Bar and hello Sushi Bar (to destroy your set, but to have it on video...). Keep up the great work!!

This is absolutely amazing! Your sets are breathtaking!

Thank you ALL for your GREAT comments, and I'm superhappy that you like our work!

OK, as promised, here's the "Production diary No.5"
(btw - it's still a quick composit, but be sure to check out a special treat at the very end )

The parking meter is a nice touch, and the final comp looks great

Love it, love it and love it (did I mention that I loved it?):cool
E

I can not wait to see this completed.

RPF PREMIUM MEMBER
Everything's looking great! Thanks especially on commenting the lighting. :thumbsup The toplight seems like a good idea to get some separation between the actor and the background. What lights are you using? Fresnels?

It's amazing to watch you doing this! Thanks for showing all of this!

I wanted to say a couple more things on the lighting!

Ville, mostly we use "Dedolight" lights. We have a couple of 150W and a couple of 400W lights. Since our setups are always quite complicated we usually rent more of them.
As you noticed it's good to light a person from behind to get some separation from the background. In the production diary Dino called that "kontra-light" since we in Croatia use a german term "kontralicht". In english though, the correct term would be "back light".

We like that look very much so we use it pretty often, but it's not - a must. In fact, you don't see it that often in Blade Runner, interestingly. The light comes from only one source for 90% of the time and it's from the side, not from the back. I guess if you have great set design everything looks great, we however rely on lighting a bit more.

Also, pretty important factor in making the shots look cool is fog, not only in exterior scenes, but also interior. Rooms are not normally foggy in real life of course, but it looks great. Aesthetics before logic is our mantra! :lol 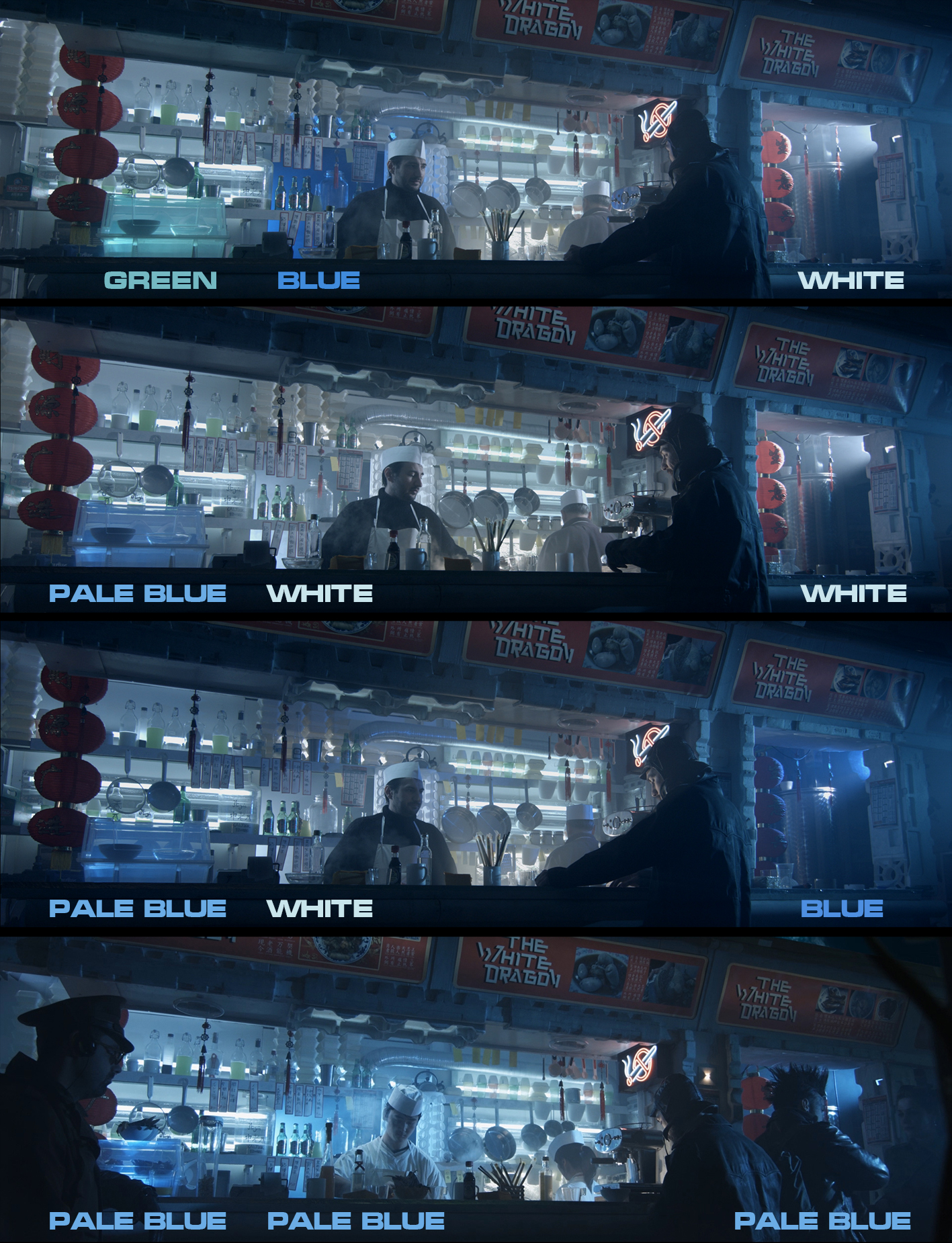 My point being you don't just come on the spot and start shooting, but actually it's lots of testing until you get the final image.

We actually filmed the whole noodle bar scene a couple of times before we shot it for real. We do it to solve things like camera and actor positions, and to get a feel of the scene early on. That way you can see potential problems while you are still in the sketching phase.

1. First test was shot outside in front of garage, since we didn't start building the bar yet.
2. A couple of tests were shot during the building phase, to test the lighting and so..
3. And this is a final shot, minus the post production. 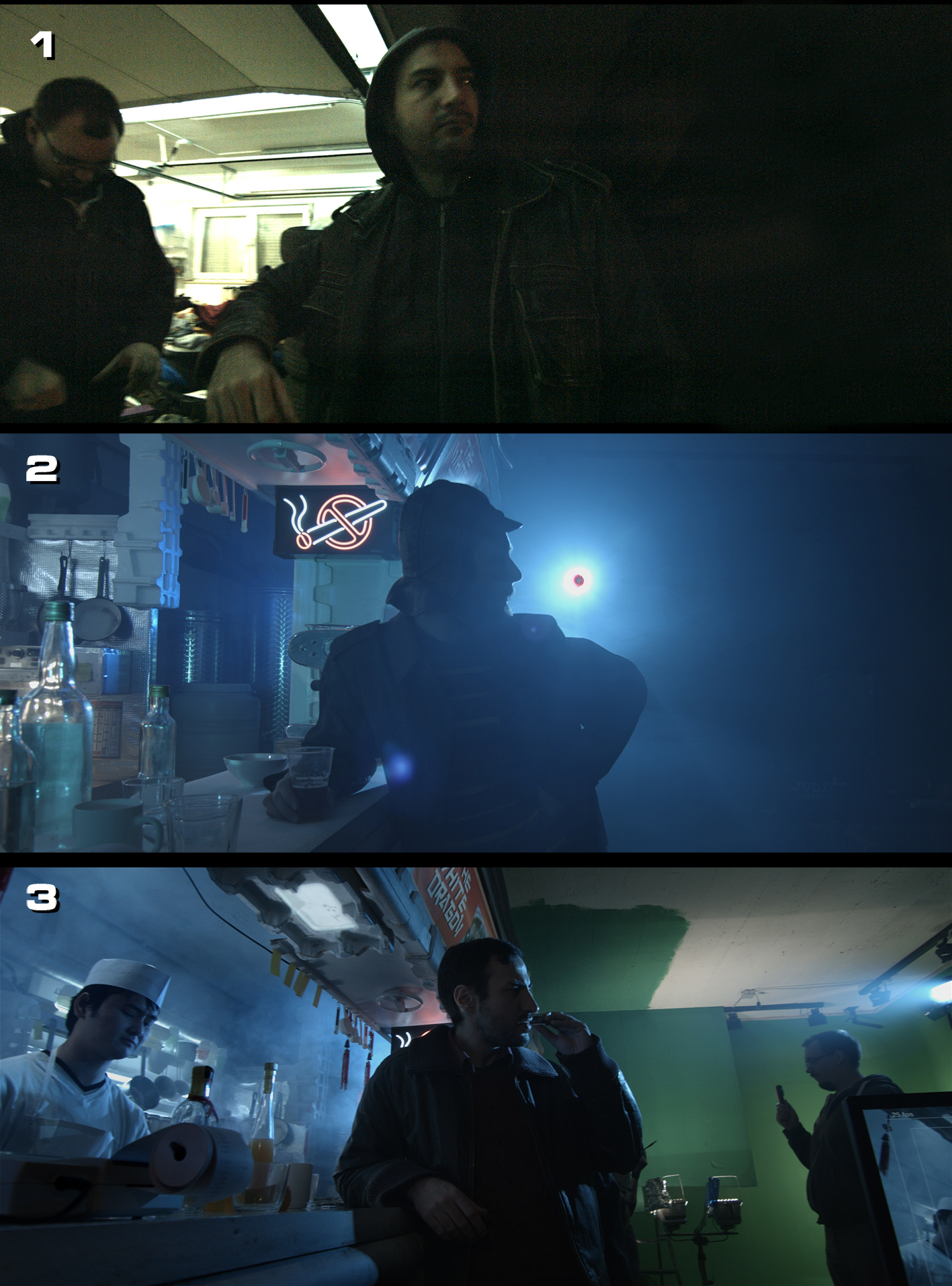 We're slowly preparing the toilet scene so in the next few days I'll try to post some progress on the street cop costume and so..