RPF PREMIUM MEMBER
This is absolutely amazing! If I'm ever in Croatia I'll by the whole group drinks. cheers

I'm more and more blown away with every update. This is such beautiful work.

Fantastic! Always love the behind the scene stuff. And yes, lots of prep before shooting for real; that's why you have a DP, a trusted camera operator and a Director and...well, you get my drift

RPF PREMIUM MEMBER
This was just posted on facebook.....

eek:cool ARCHIVES!! Great behind the scene for sure. TFS with us brandomack my V.K. eye was not too far from the original

joberg said:
eek:cool ARCHIVES!! Great behind the scene for sure. TFS with us brandomack my V.K. eye was not too far from the original View attachment 451557
Click to expand...

Thanks goes to Bradley Layer for sharing via the Propsummit Facebook page.

YEAH!!! I saw it as well on FB this morning and I almost fell off my chair. :lol
Thank you Brandonmack for posting it here!

There really are some AMAZING photos of more obscure vehicles, and most importantly - the sushi bar. 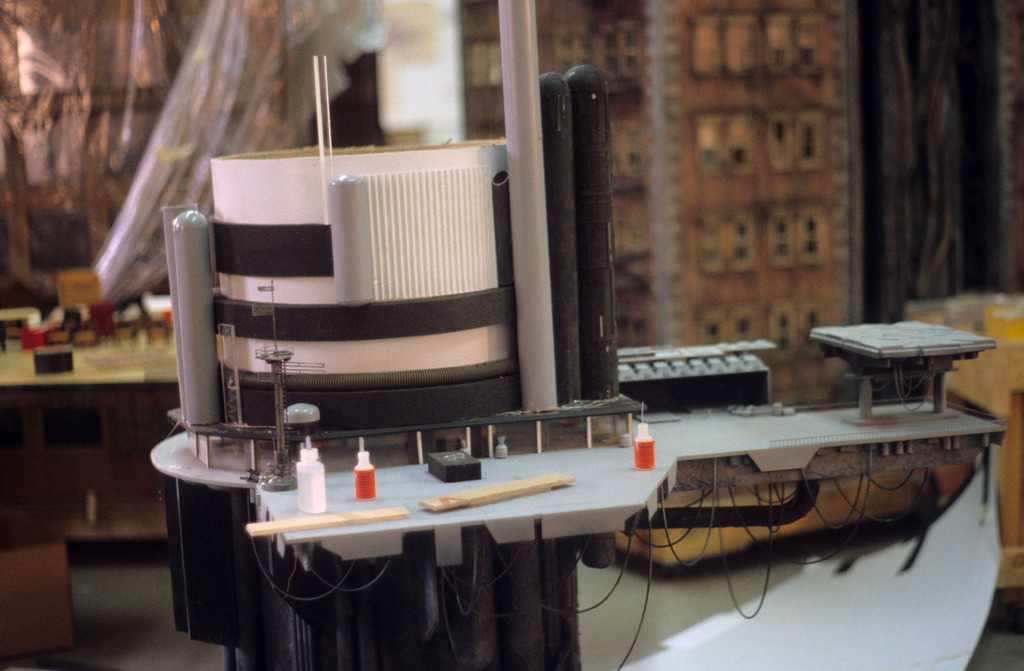 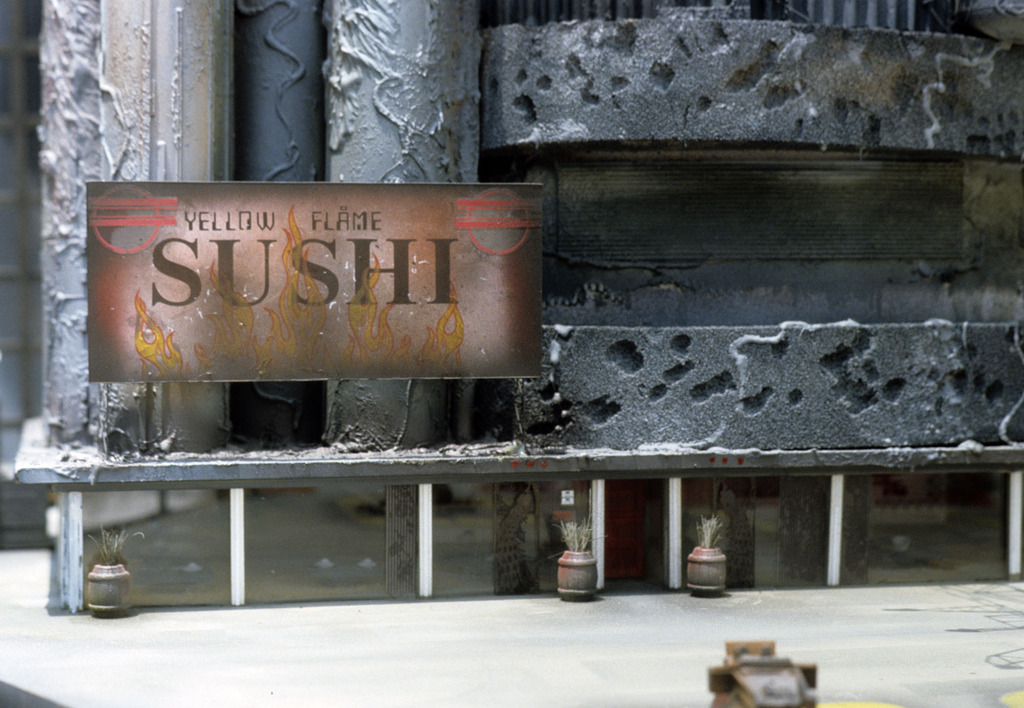 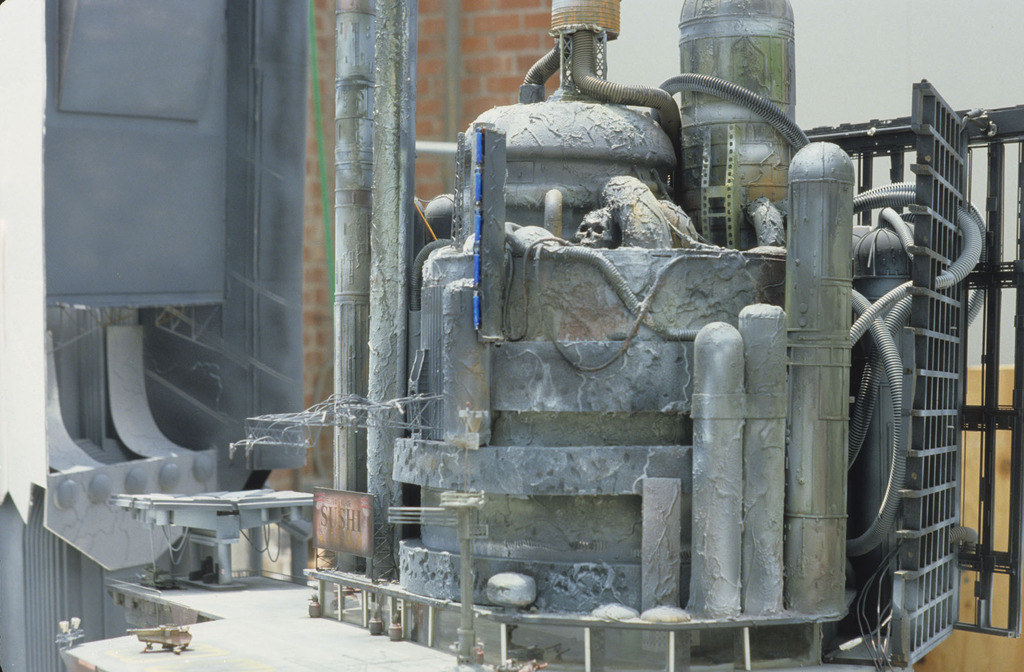 I can see now that on our model we did many details somewhat differently, but generally I guess it has the same vibe..
We are definitely missing that skull there, that's for sure..

Does anyone know who made the album, and if more photos will come our way?
Last edited: Sep 10, 2017

A huge thanks for Bradley Layer for that throve of pics!

RPF PREMIUM MEMBER
This looks great! As a film student, it's nice to see people who still use practical effects. Very refreshing!

About the compositing: do you use the blending modes and opacity tweaks to layer all of the passes together? And have you had to deal with the fixed pattern noise issue on the BMC4K? Just wondering, because I know it's not all that sensitive in low light.

Each pass we film has a different light setup, and we want to composit it all together, right? So basically you want to "add" all passes together, but only light, not the blacks. For that I use "screen" blending mode in After effects, and they do just that - recognize only light parts of the shot and add them together. It is exactly the same process that they did in the old days; they shot a pass, rewound the film back to beginning, and shot another pass, thus adding more light each time. So "screen" blending mode is the only i need, actually.

Also a good question about the fixed pattern noise on Blackmagic camera. Yes, the truth is, they are not that sensitive in low light, and you get a fair amount of noise in those types of shots. So even in the completely black area of the shot, there's still noise (which is also light information), and you can imagine if you add 5-6 passes together - the noise adds too and you end up with a mess.
So what I learned is to crush the blacks on each shot to the point where the noise disappears, which leaves only light information - and then screen them together. Just as simple curves adjustment will do.

There was also an issue of those weird white dots all around the shot, which many users of BMC cameras reported around the web. We were noticing them too when the camera was new, but they somehow disappeared over time. We do install all the patches they release, so that could have fixed it..

RPF PREMIUM MEMBER
Thought so. Blending modes are pretty powerful tools! And have you tried looking into something like Neat Video or Dark Energy for doing some noise reduction? That way you wouldn't have to clip the blacks, although this subject matter definitely lives on the aesthetically darker side of things.

Yo, yo, yo! Whats up?
I managed to make some progress on the Street cop costume, so here are some pictures!

Firstly, I cracked the vac-form problem I had before. It turned out I had been using the wrong kind of plastic. I couldn't heat it to a point that was good for forming because it would melt. It just wasn't the kind you could use for that particular job. So I found some small store that was of course hidden from the eyes of public, and I bought some proper plastic sheets. It worked flawlessly.
I did pierce each hole on the clay mold as you guys suggested so the air would go through, and I used vacuum cleaner to create suction. 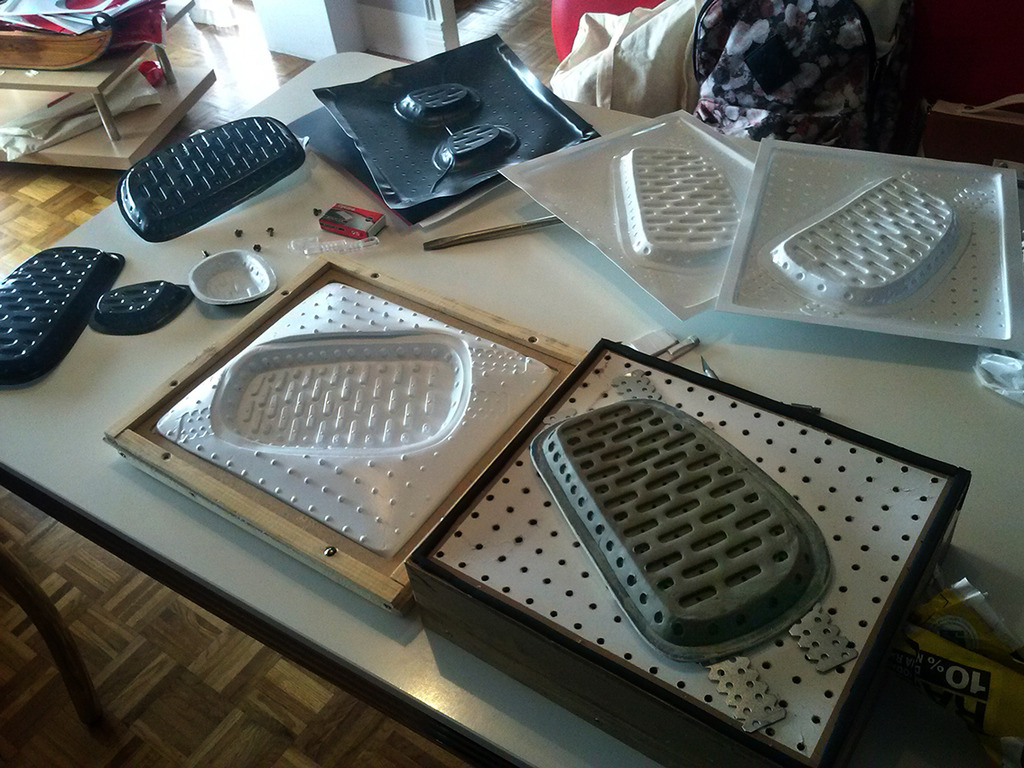 Here are the pulls that I made. The plastic came in different colors, but later I spray painted them all black anyway. 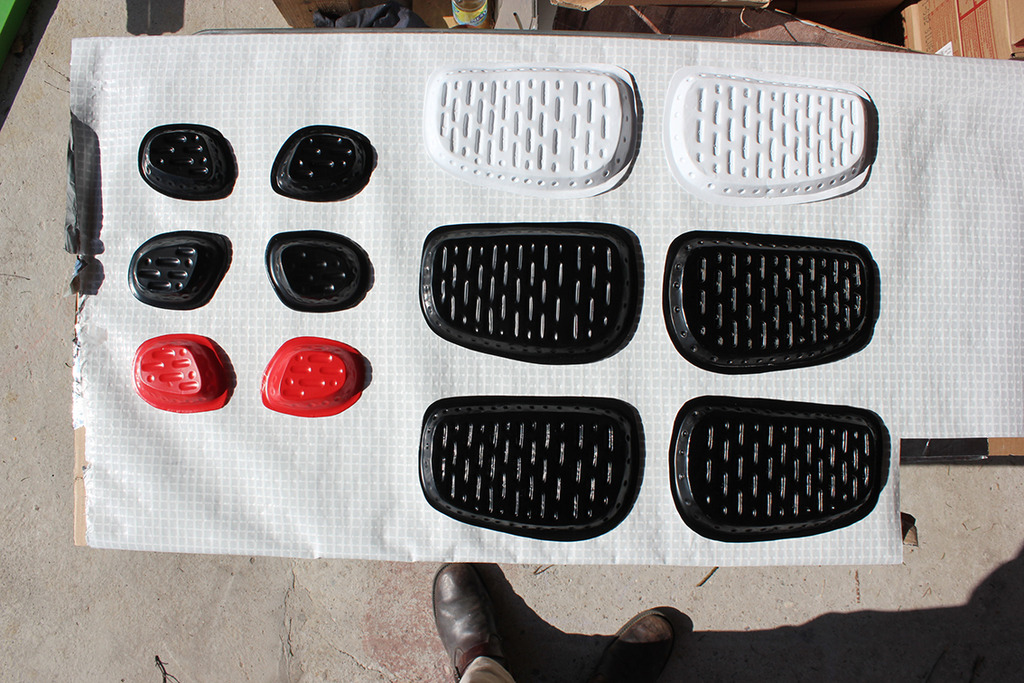 Since they are hollow I wanted to give them some rigidness, so I filled them with expanding foam. Somehow it looks edible, right? :lol 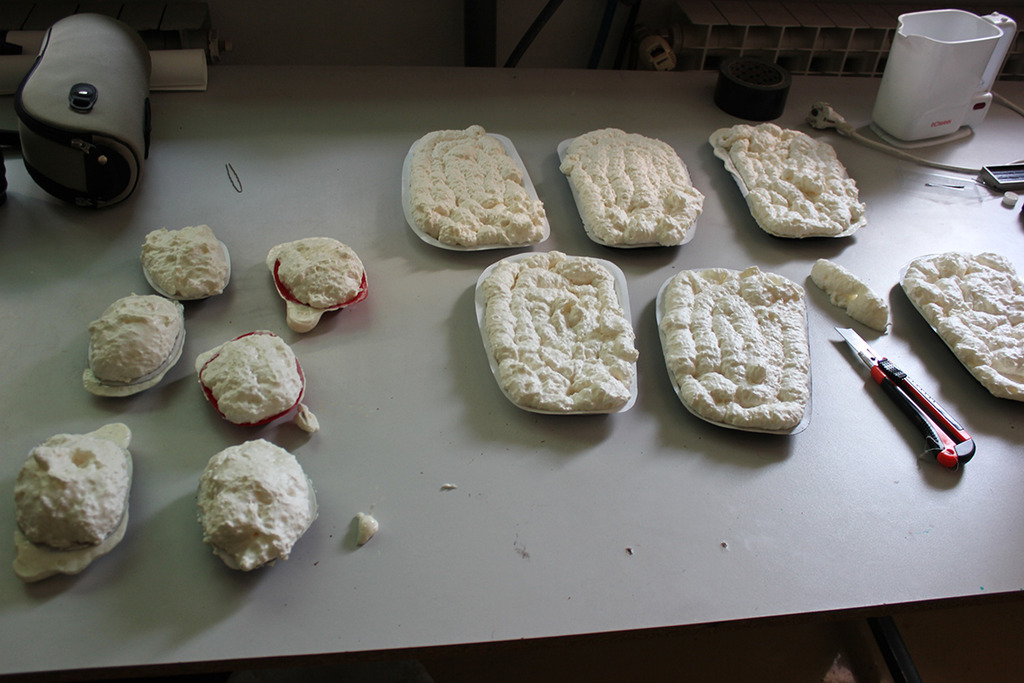 And here's the famous cod piece, it barely fit in my small vac-former!

And now all that is left is EXTREMELY slow and boring task of hand-sewing them to the vest. It's soooo boring.. 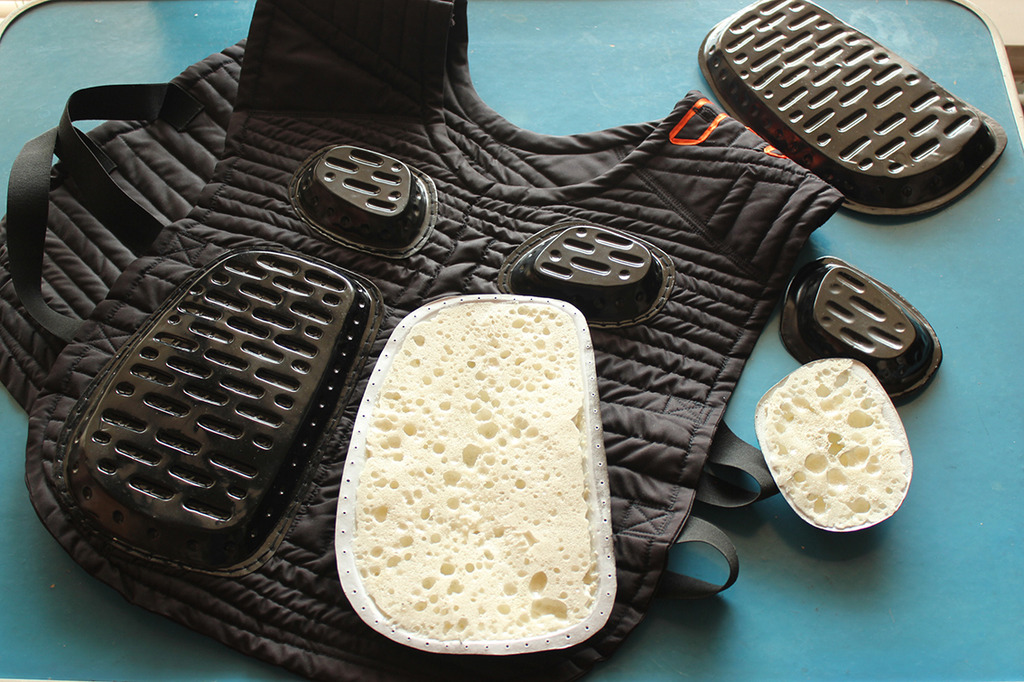 Ok, apart from that I continued to cast all the badges that I am going to need. Since many casts have some imperfections I just remelt them and pour them again, so I'm used to the sight of melting Bladerunner badges, but I guess to other people it might be a first... :lol 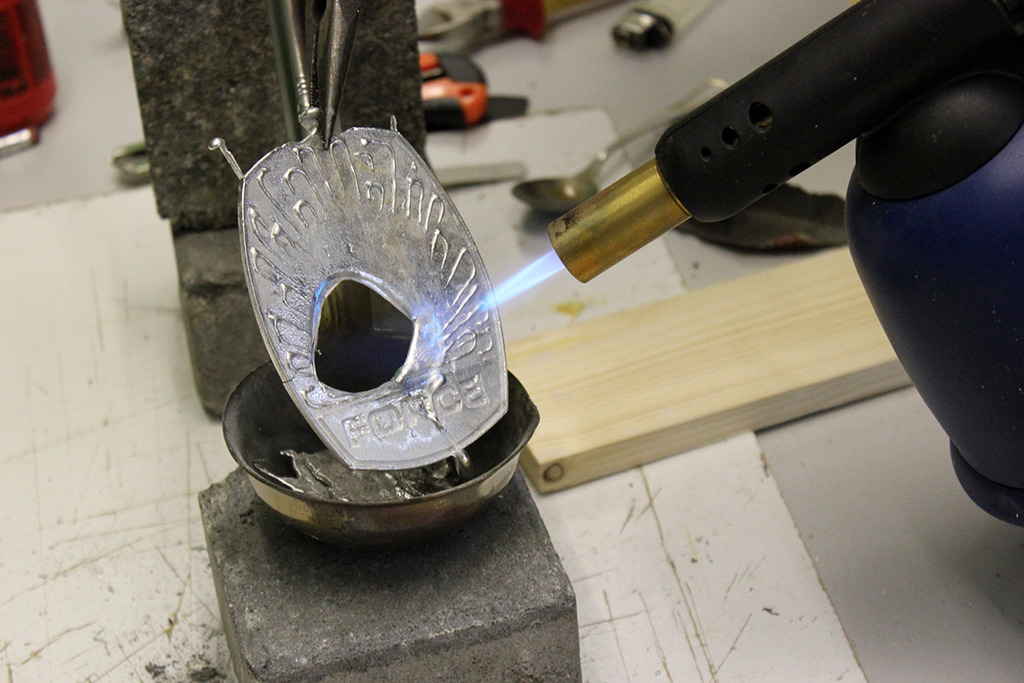 Oh, yeah, I finally made those two.. number.. pins? Whatever they are. I hand cut the numbers from adhesive foil, and used them as a stencil to spray over them. You can see I bought hair buckle and glued it in the back. 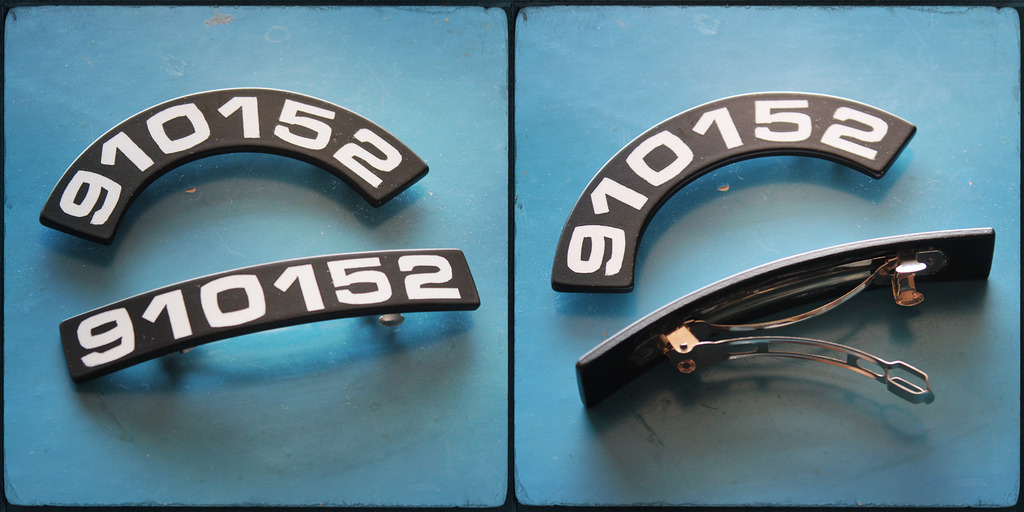 And here are all badges I made. The cop is going to wear a raincoat, so I needed to make two sets of each badge. One for the vest, the other for raincoat. Also, I'm going to put police badge on the shoulder of the raincoat, and one of them goes on the helmet. 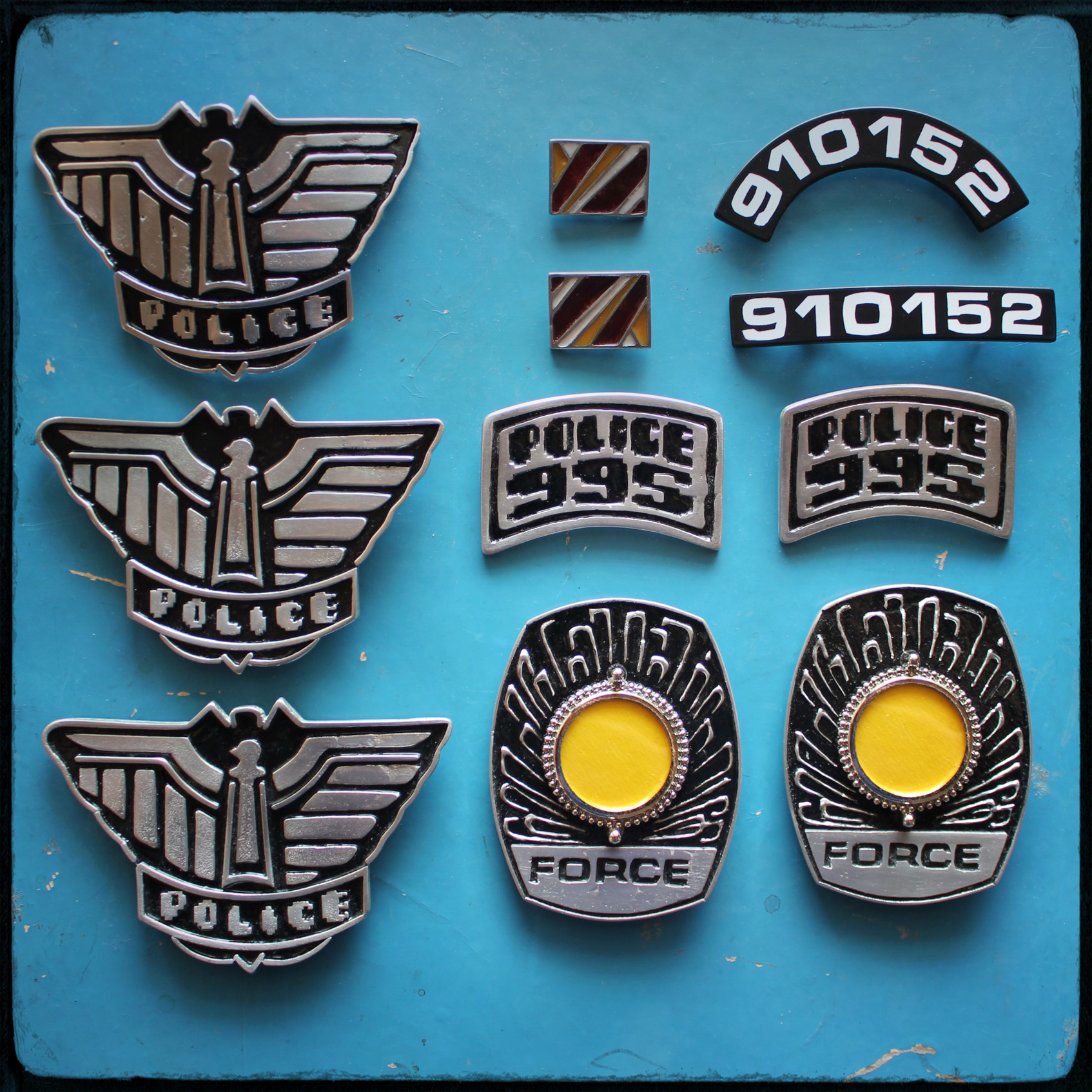 This weekend we'll probably finish sawing the costume, so expect some pictures next week!
Thanks for looking!
Bye!!!
Last edited: Sep 10, 2017

Looking very spiffy that vest and those badges:cool When using expanding foam and to somewhat control the expansion, you can always spray water on top of it (have a spray water bottle in your hand, while another friend spray the foam)
L

Only Just found this project and I'm loving everything you're doing, the way films should be done might I ad haha

Keep it up, Very inspirational, I intend to do similar projects when my workshop/studio is finished.

Thanks guys! I'm happy if our work inspires you!

So the cop uniform is almost done!
In the last couple of days we sewed the rest of the parts, and today we had the final fitting with our actor. Here you can see the shoulders being tailored: 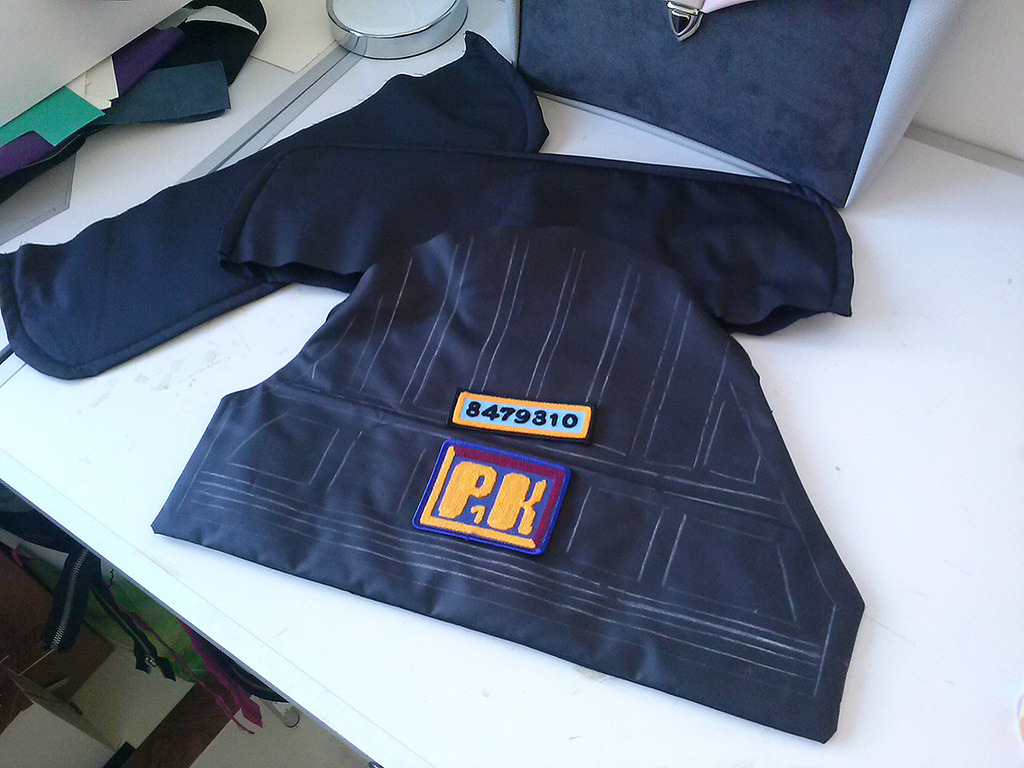 And in their final form... 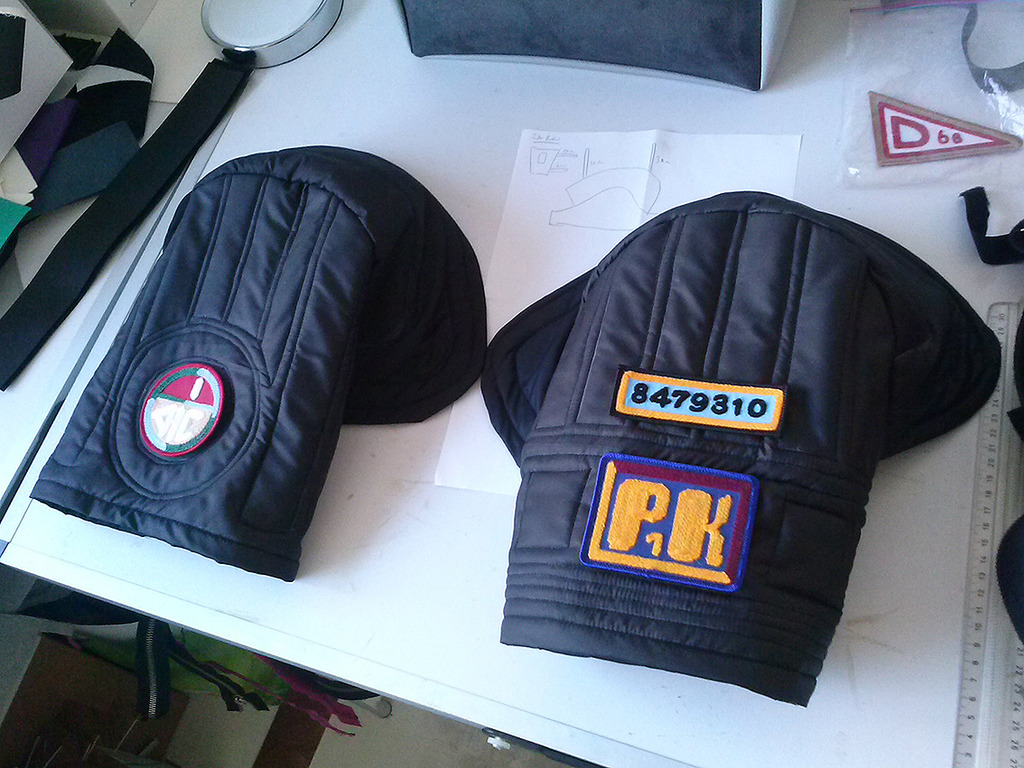 I also found some piece of leather and used it to make the holster.. It's not that rigid, but it's going to work for the film. 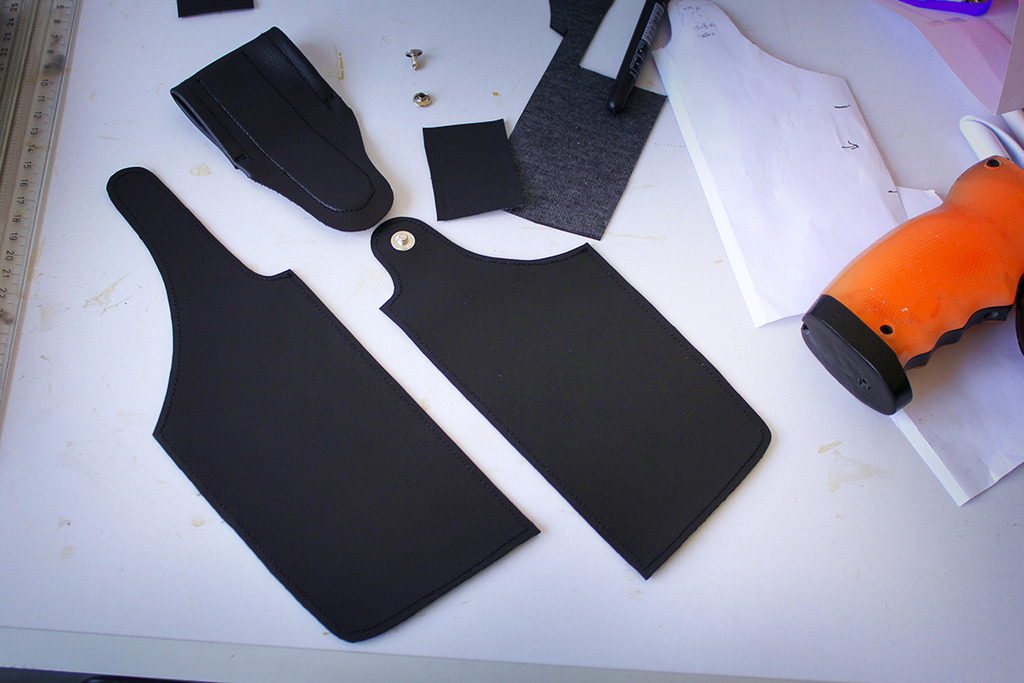 Here's the finished thing attached to a utility belt we acquired: 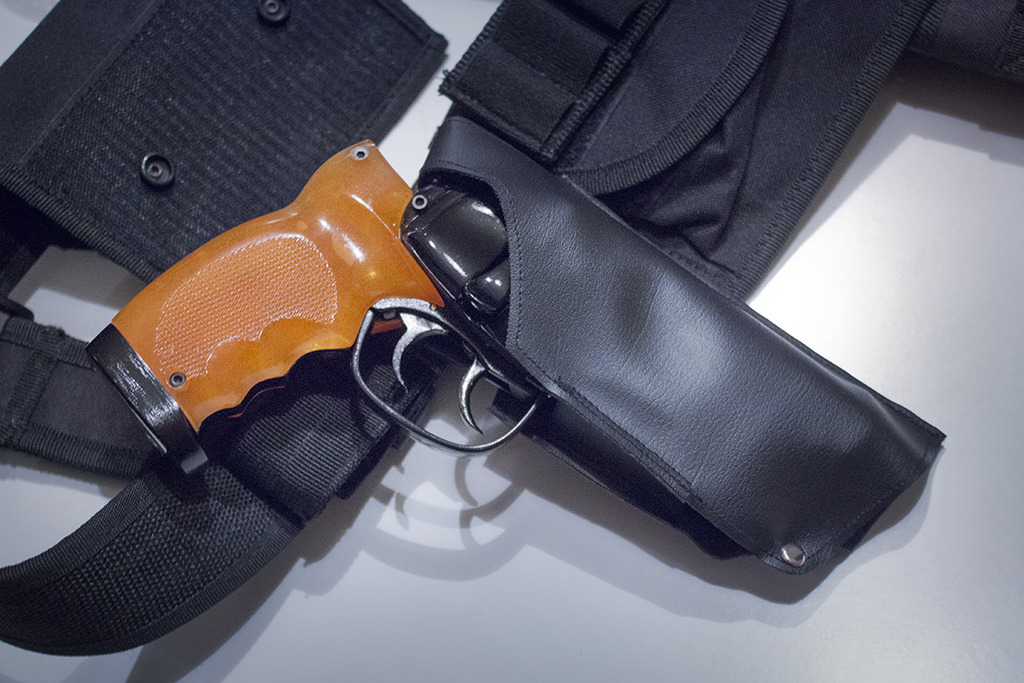 So, today our actor came to try the suit, and we did a quick costume photo shoot. Most of the costume is sewn for the movie, of course, but we did use some airsoft military belts and pouches to give some more texture to the whole suit. It's not 100% screen accurate, but nothing in this film is. :lol

Overall we are very satisfied with how it turned out, and here are some official character photos... :cool 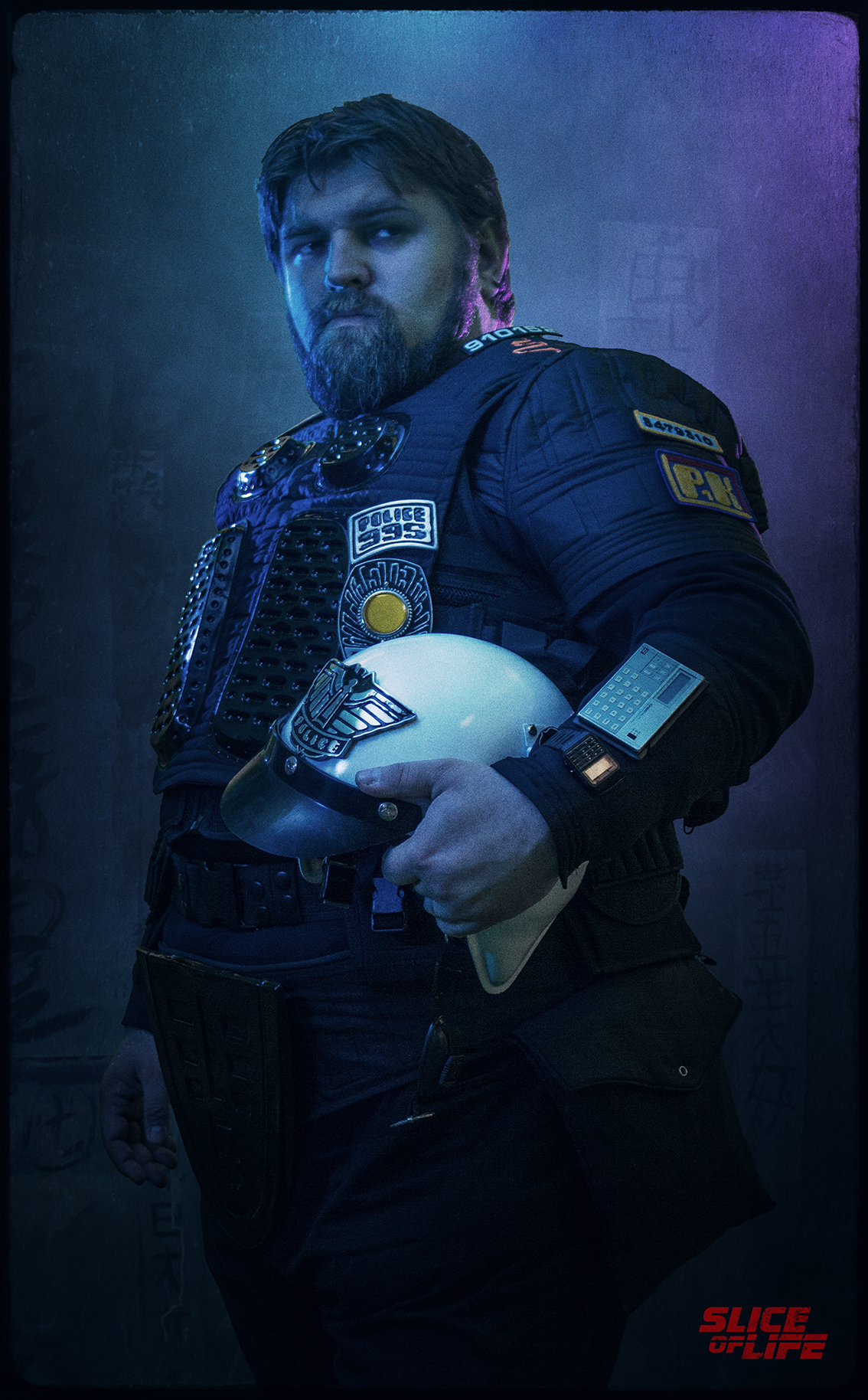 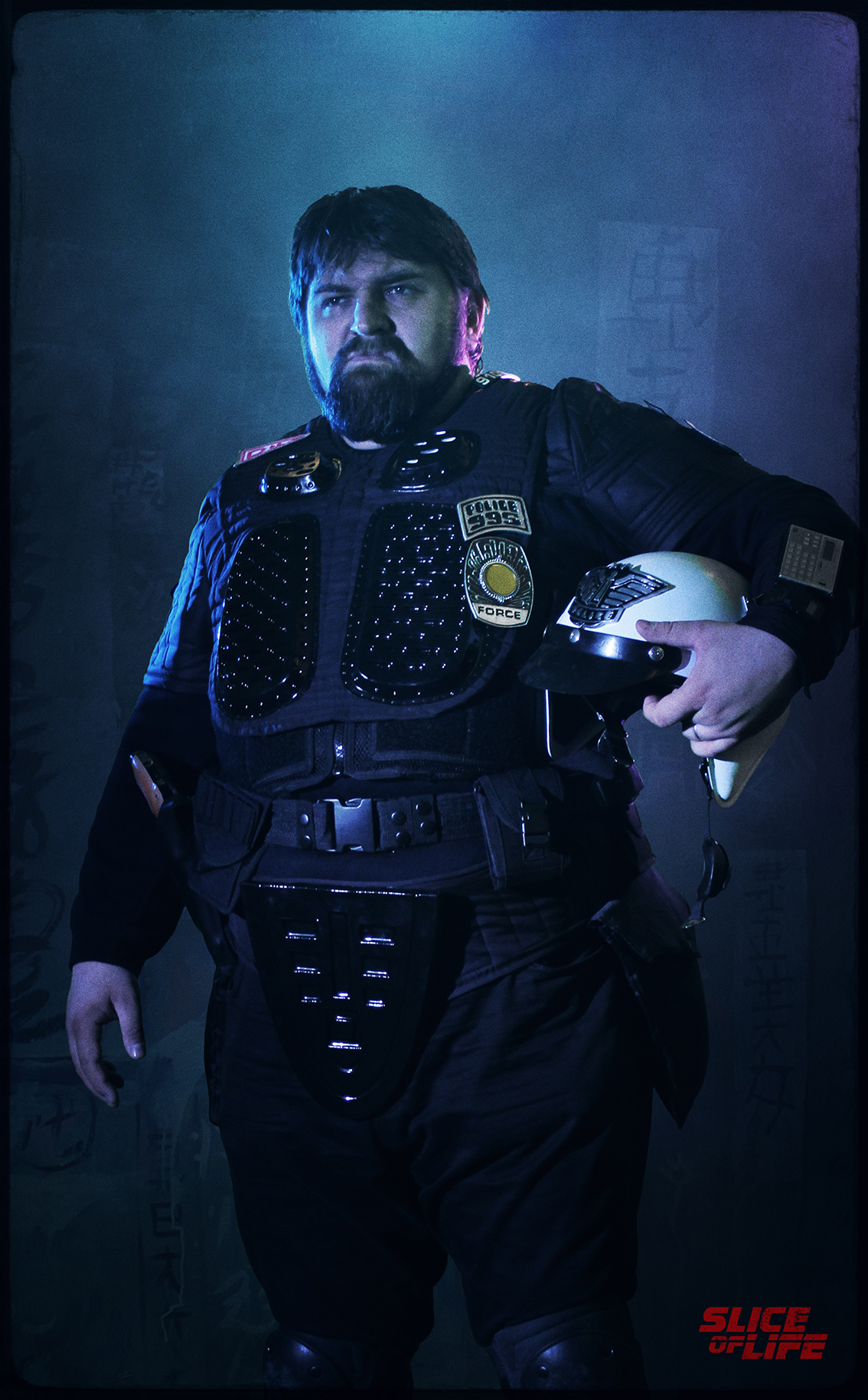 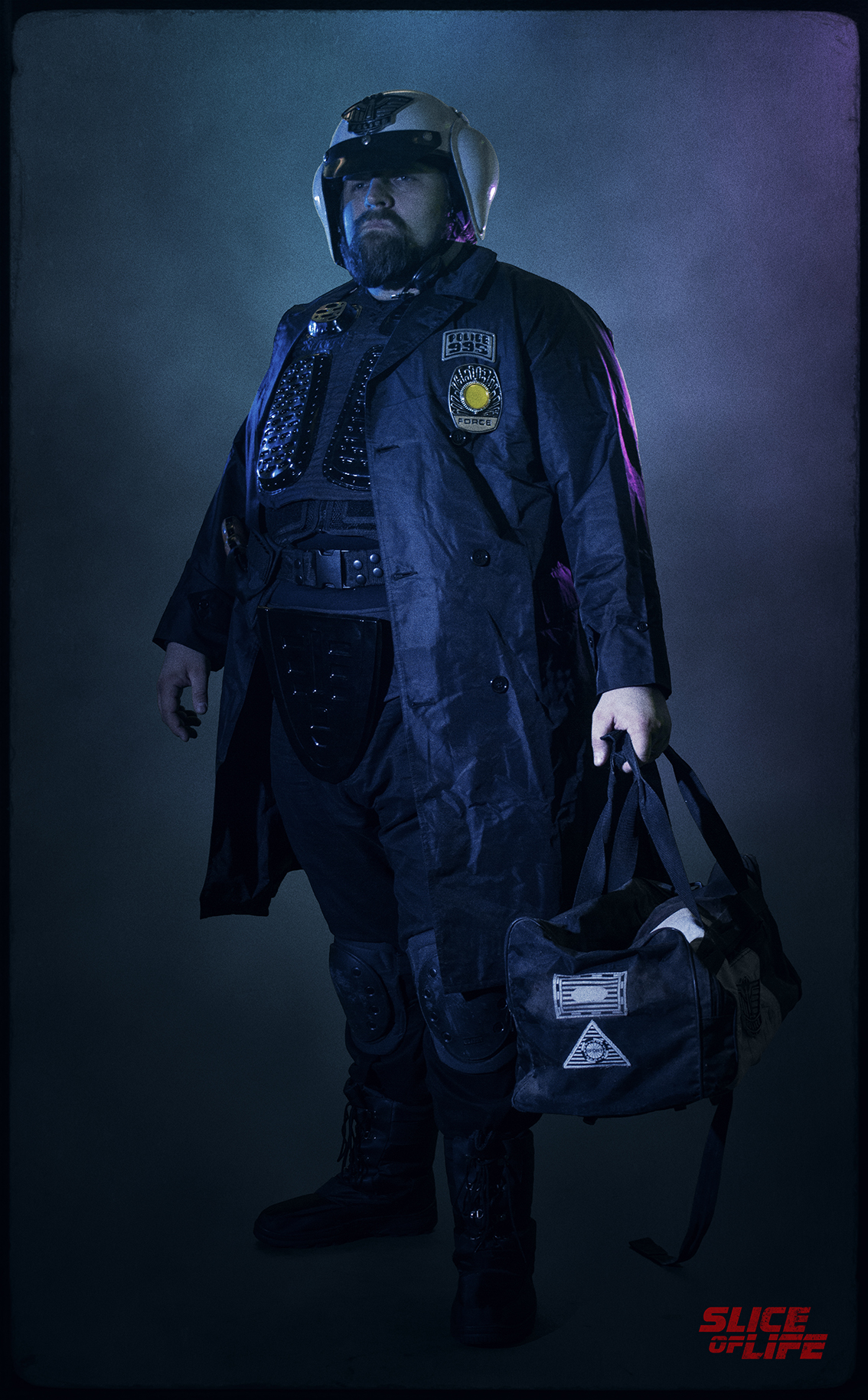 In the last picture you can see the raincoat we bought. There's still a couple of things to do, like making ID photos for the badges.. Stuff like that.. But it was great to see it finally put together after all that work.

Right now we're still preparing the set, making the props and so on, and balancing that with our day job. But we'll start filming... soon.
Last edited: Sep 10, 2017
T

This is so professional... I'm lacking words!

RPF PREMIUM MEMBER
How long will your film be?

It's so wonderful to see this project come together step by step. Thank you for sharing all of the details. Very inspiring.