For the finished SLICE OF LIFE film and lots of BTS documentaries follow this link:

If you would, however, like to delve into the long and complicated creation of this film, then please read along. Enjoy !

I'm sure most of you are familiar with the "Sushi bar" building. It was just one of randomly put together buildings and used in most of the SFX shots in the movie called Blade Runner. I was fascinated with the shape and look of that building since I discovered it. But why make a replica?

As it happens, I'm a young filmmaker. Mostly I'm doing music videos and commercials, but every now and then I try to make something for myself. A friend and I are huge fans of science fiction films of the 80's, so he wrote a short SciFi story a couple of years ago, and we decided to make a 20min movie out of it. We've been in preproduction for a couple of months now. Story-wise it is not related to Blade Runner in any way, but we figured - since we need it to be in a dystopian universe anyway why not put some random BR stuff in it, right? Most of the story is set in a deserted gas station high above the city level, and "Sushi bar" fits perfectly to what we imagined. We figure nobody will really know we "borrowed" the building except us fans and it could be a nice hommage to model builders and designers of BR.

I must point out that due to limited reference on the subject this will not be an exact replica, and I will take some liberties whenever needed. :lol

All of the special effects in the movie will be done with models and miniatures - the old school way! So there will be a couple of ships and flying cars as well, but more on all of that later! 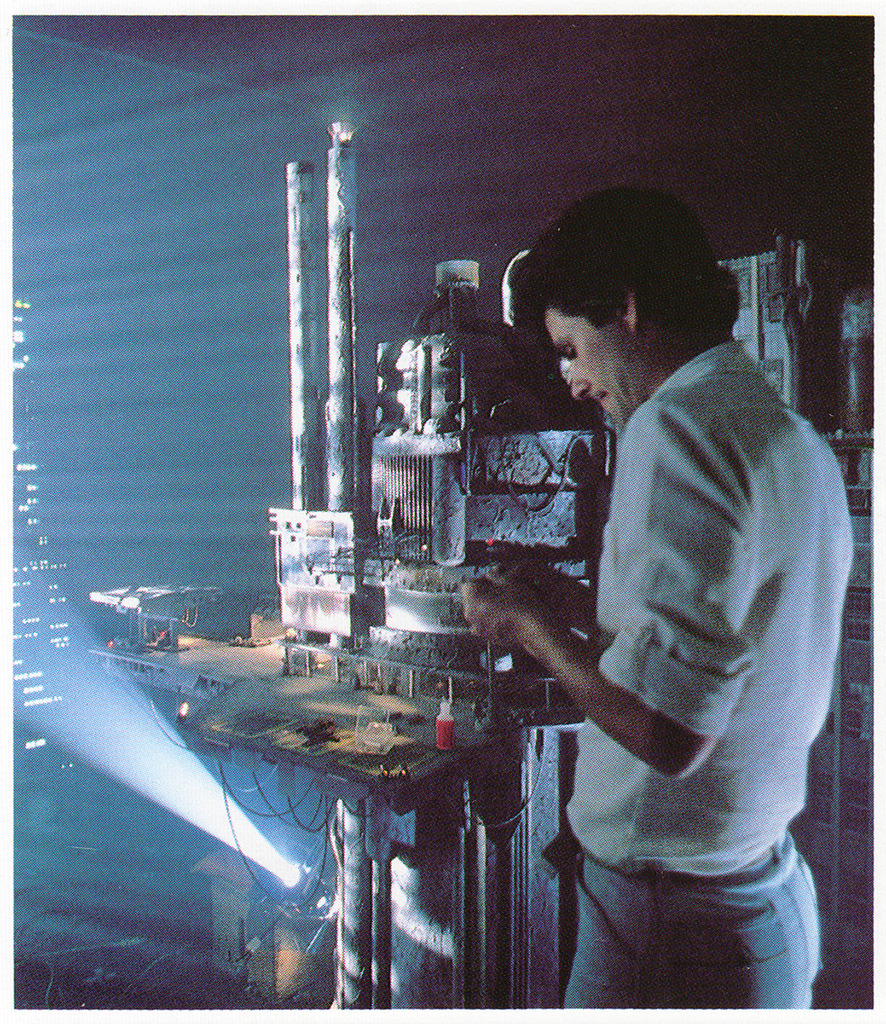 Before we actually started building anything I made the 3D model of the building just to figure where the bigger parts generally go, and to help myself with measurements. 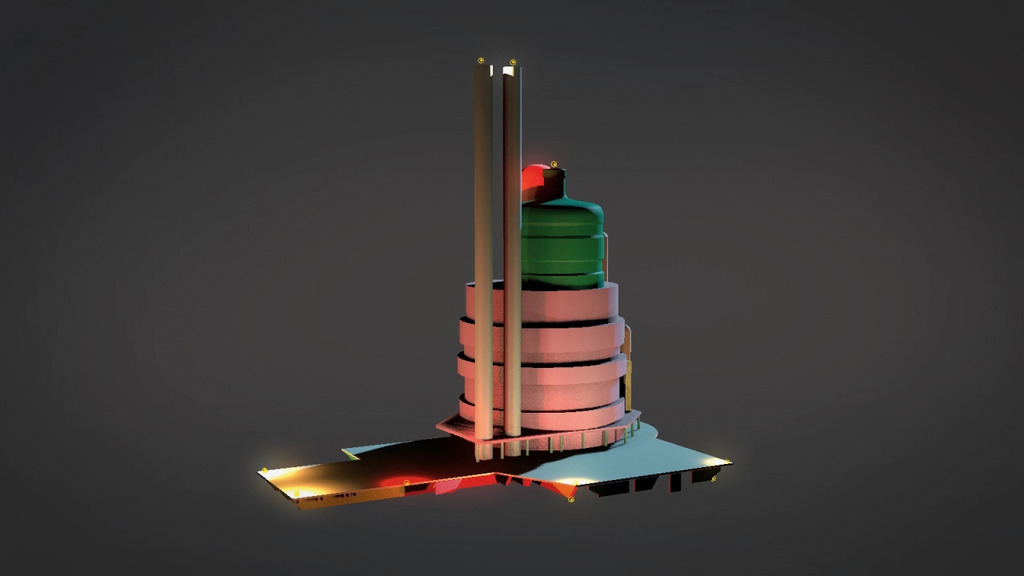 All of the measurements are in centimeters. This thing will be around 2 meters high. 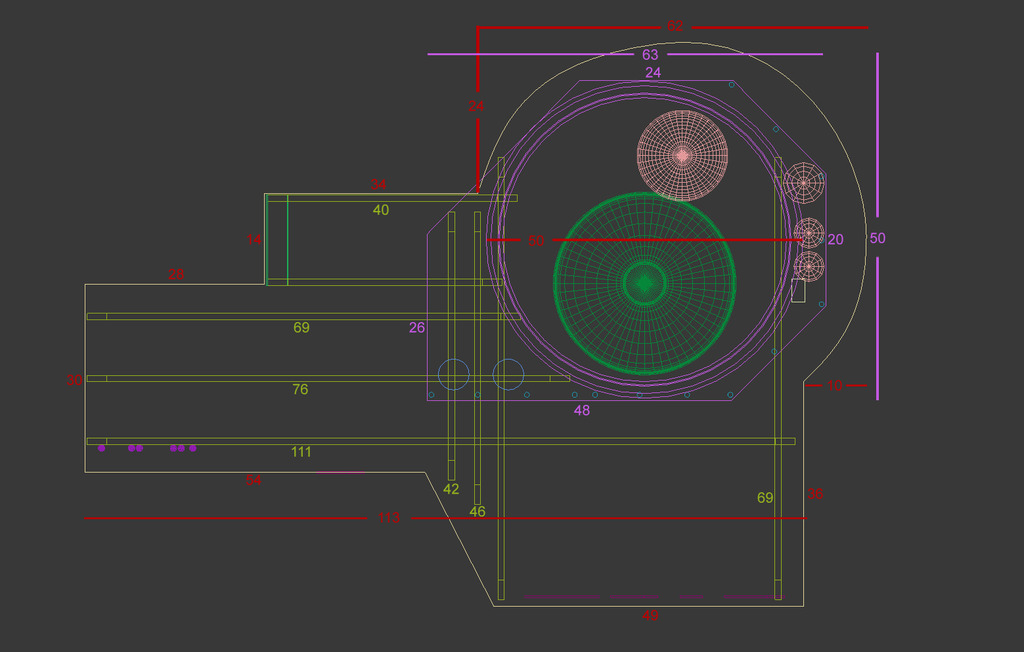 One of the most important and recognisable parts of the building is the water bottle at the top of it. There is no way for me to find the type that was used in US around the 80's so we found something similar. Here is my friend sanding the bottle. 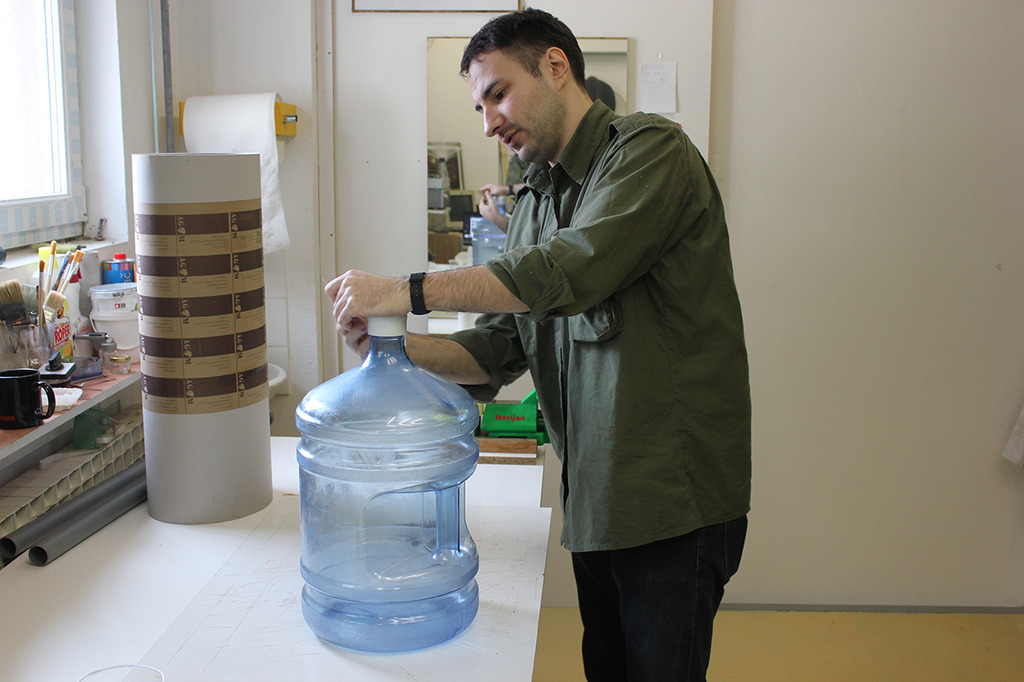 I tried to replicate the underside grid as close as I could: 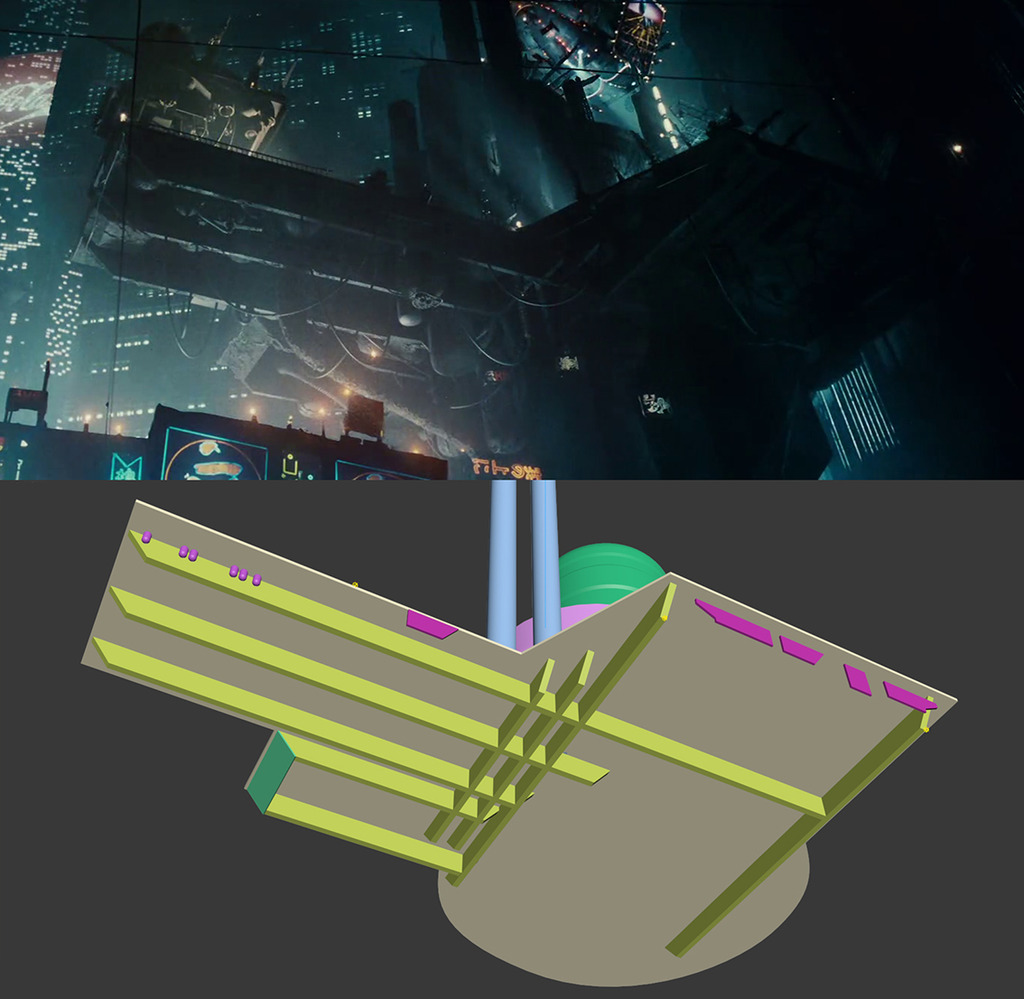 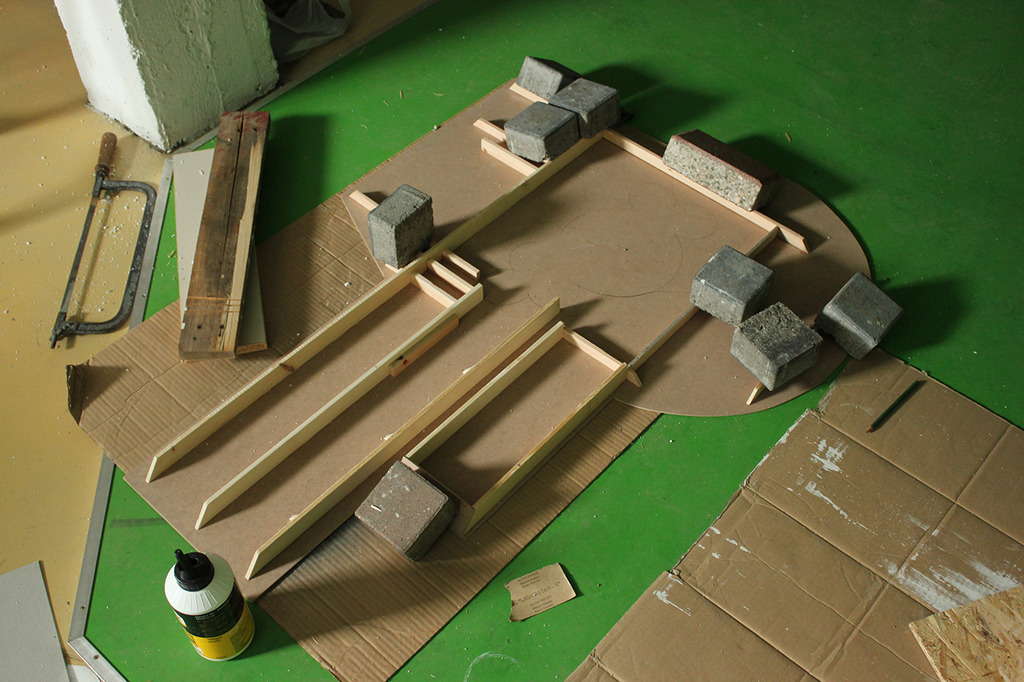 For the lower part of the building we just glued together cardboard tubes, and later we'll dress them with wires and random junk: 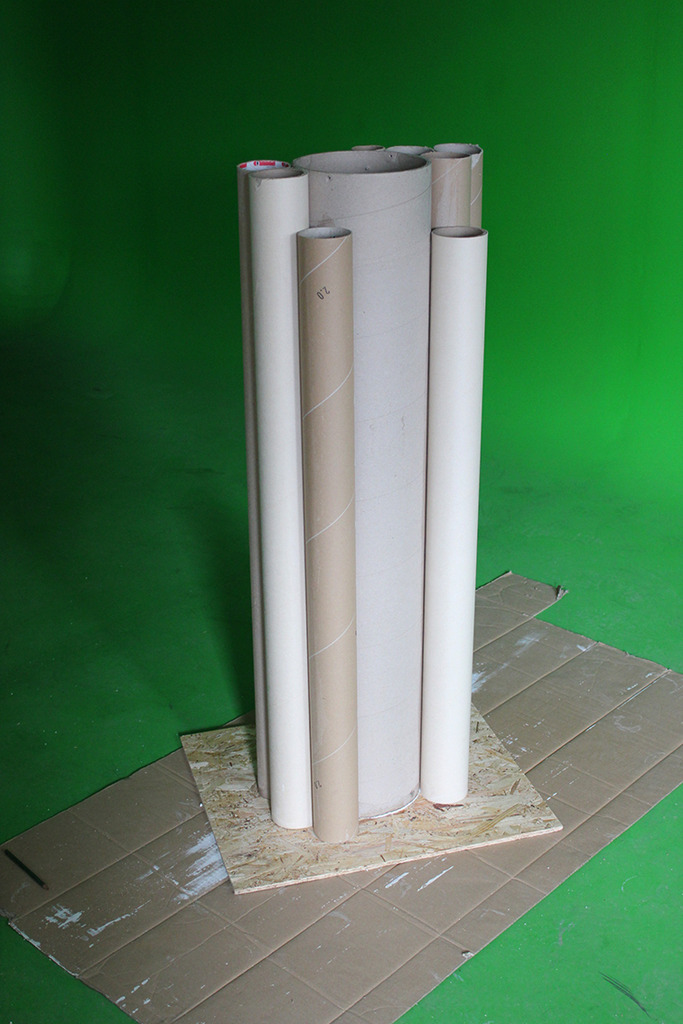 The main part of the building has a lot of levels so we cut them from styrofoam, and covered the sides with cardboard: 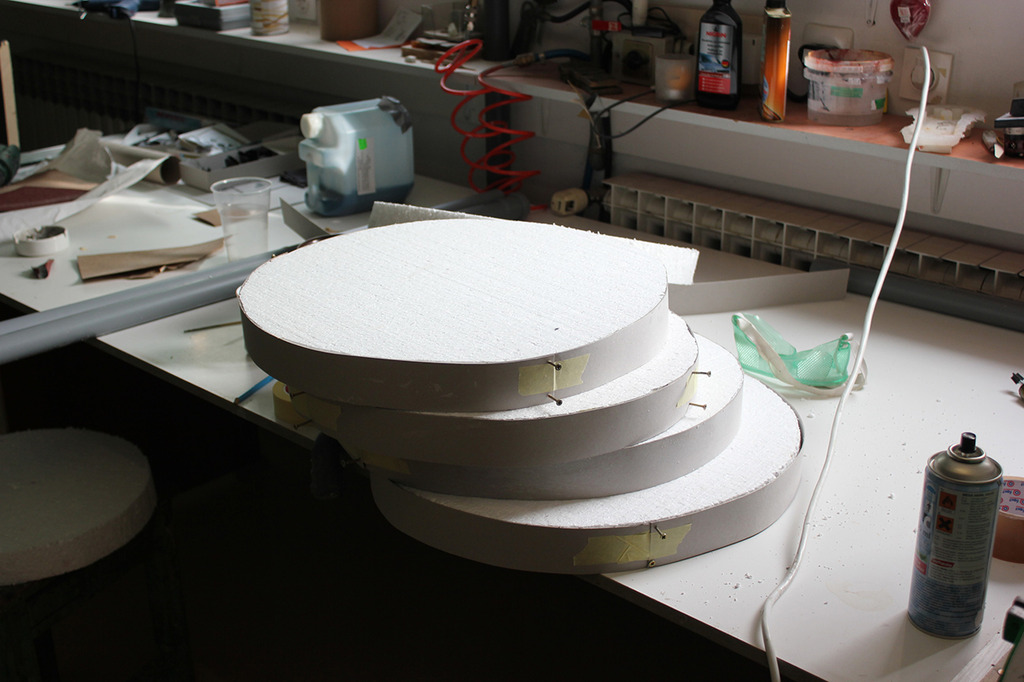 It's starting to take shape: 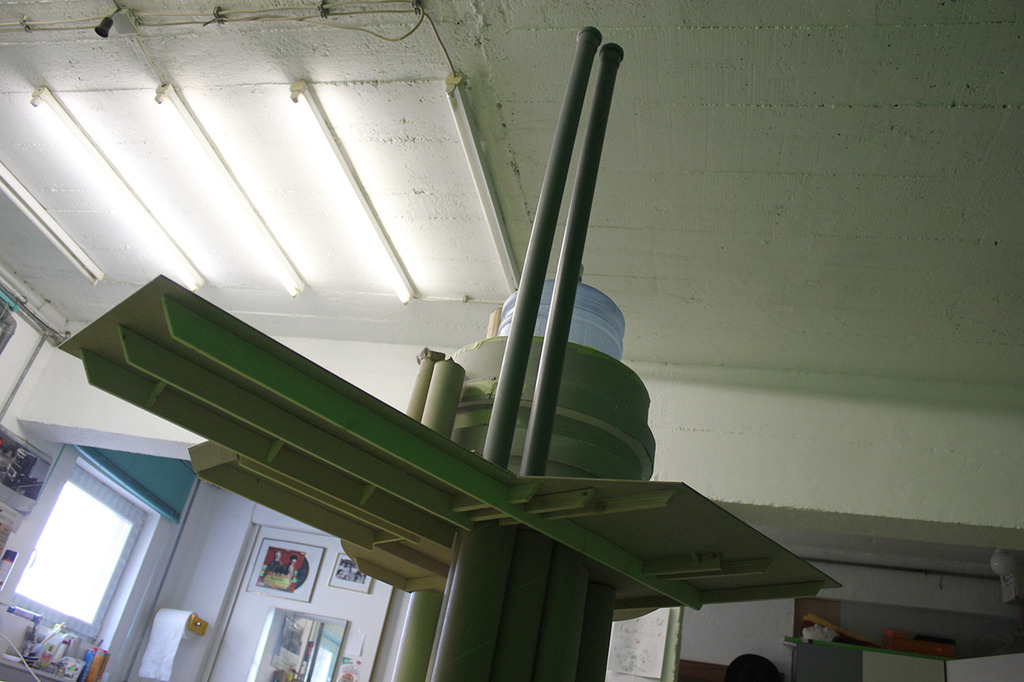 The last shot for now is not that glamorous... Nothing is glued yet so its not at the angle. We covered the main part of the building with paper-mache technique. Water thinned wood glue + newspapers. It is totally cheap, very hard when it sets, and it gave us an uneven texture that the original had on these parts: 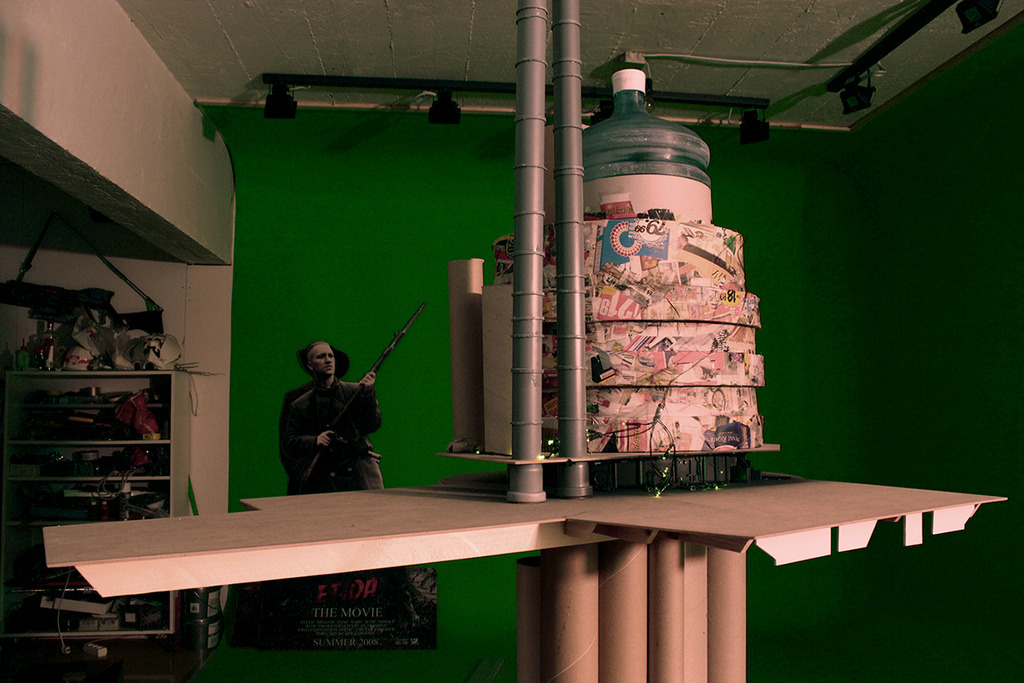 I downloaded all the pictures from Douglas Trumbulls site, and the one I posted at the beginning I scanned from Cinefex. Apart from that I'm working with screencaps from the movie. If anybody has some rare behind the scenes photos apart from Trumbulls site and wants to share them, I would be grateful.. If they even exist.

Very good start indeed and very excited to see it coming together.
S

KOOL - my fav movie of all time, the scenery being a huge factor - will be watching this one!

Great work so far guys, a definite subscribe!! Can't wait to see what you do with this
A

That's one of my favorite buildings in the movie. I was always curious about what went into the thing. A water bottle...!!!!

Hi guys! I appreciate your interest, it really made me happy!

We've made some progress on the model. We detailed the underside and the support column with random junk, mostly from old computers. We will use very low-key lighting in the film so that bottom part will be mostly in the shadows. 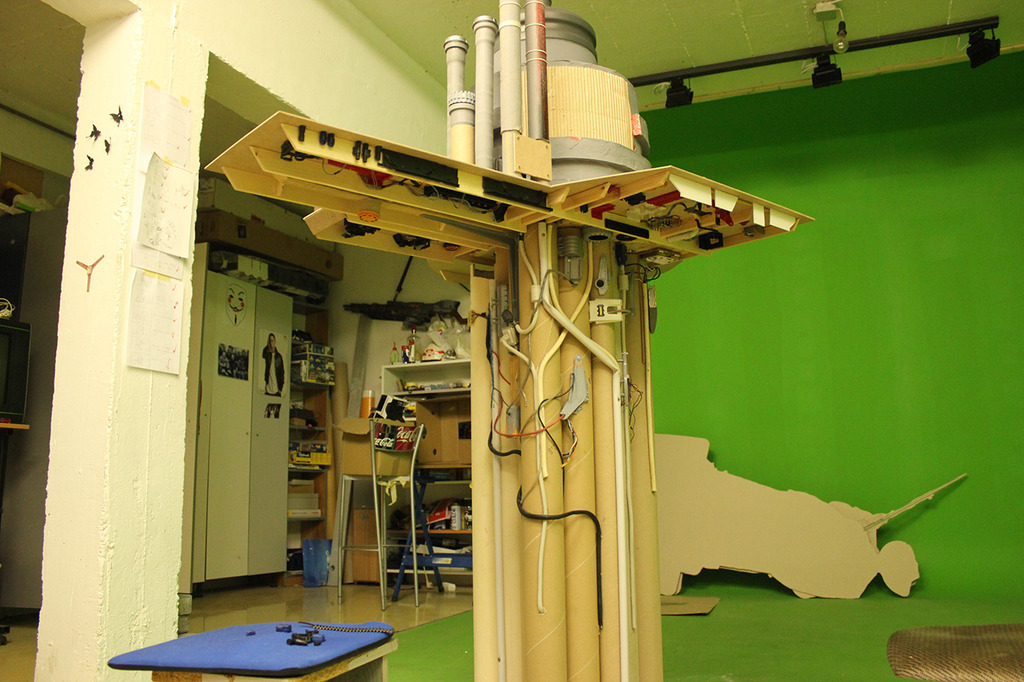 The upper part of the model can be separated from the support column for easier handling and filming. 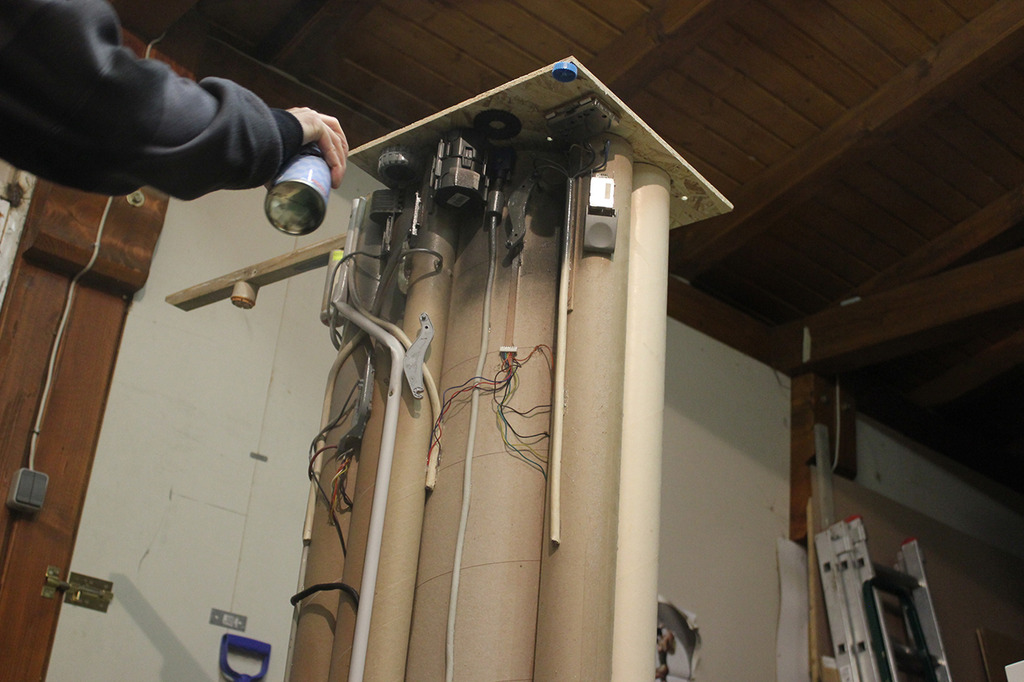 I had just enough spraypaint to finish the underside. 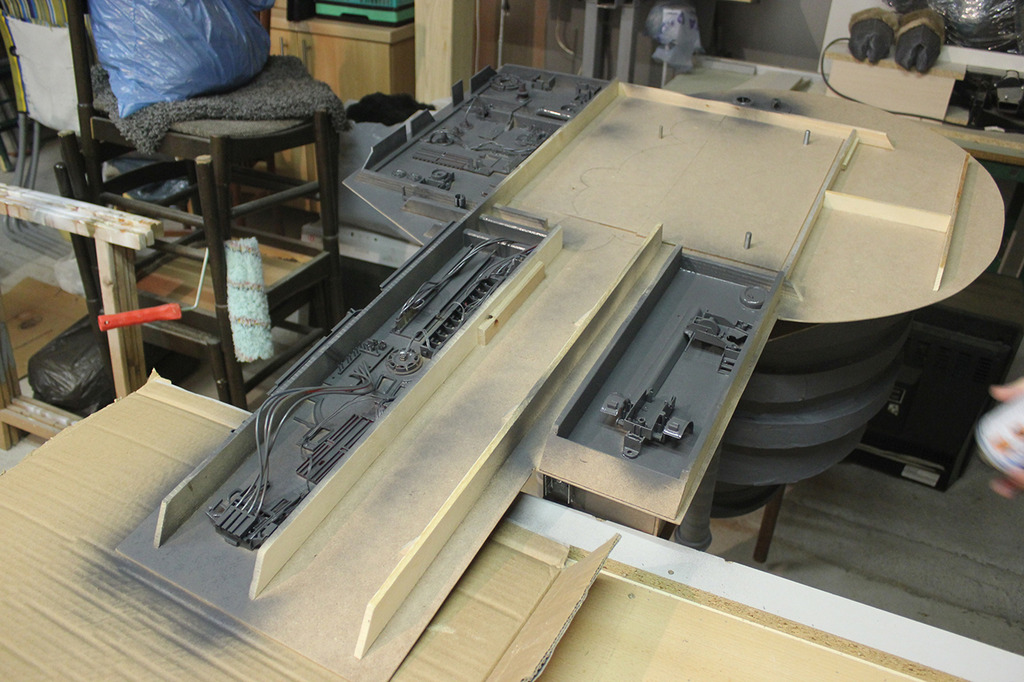 And here are two parts together again. 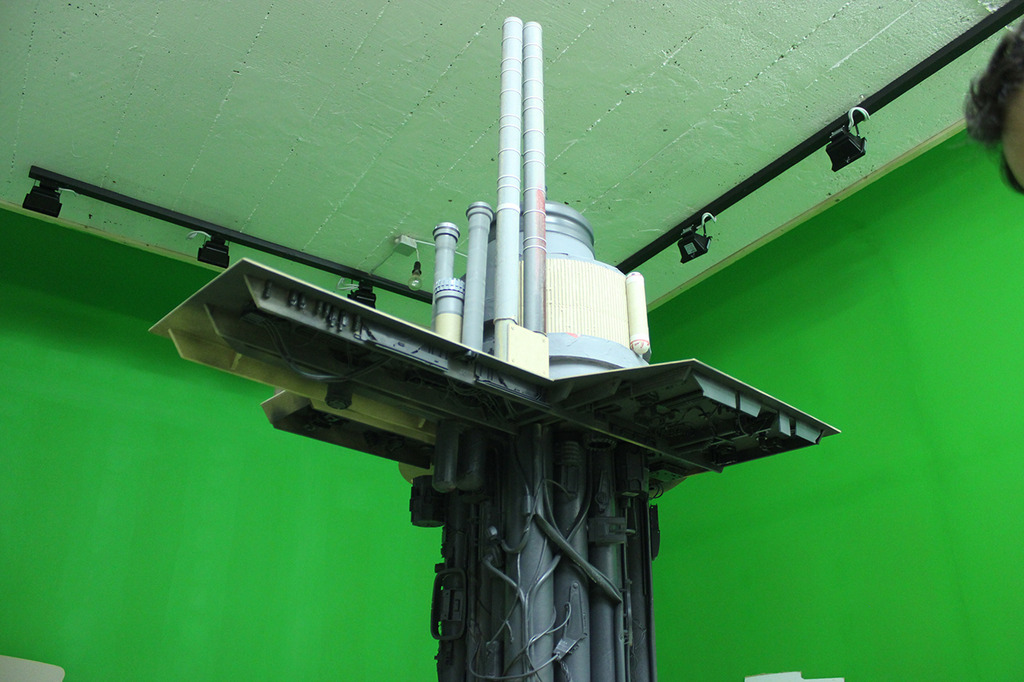 And since we were very excited we just had to make a small test with flashlights! :lol Although it isn't nearly finished, I think it looks promising! 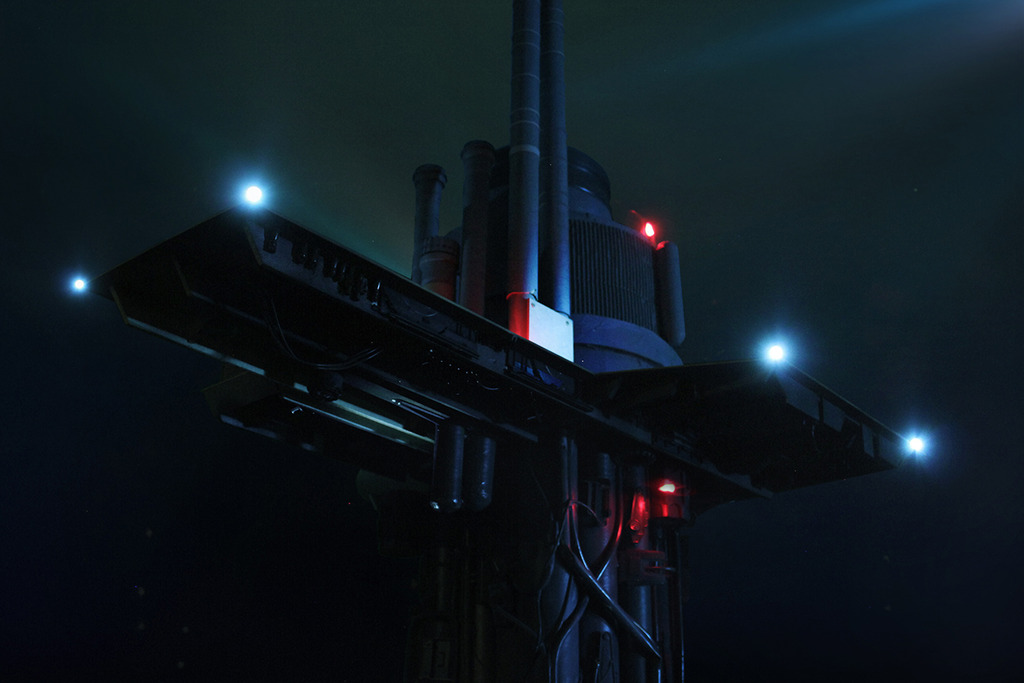 I photographed it in layers - I lit different parts of the building for each photo, and pointed the flashlight directly in camera to simulate the lights. I composited it in photoshop. I'll do the film the same way -with many different passes- with the help of motion control. So it kinda is similar to the way they shot those miniatures all those years ago. Here is a step by step: 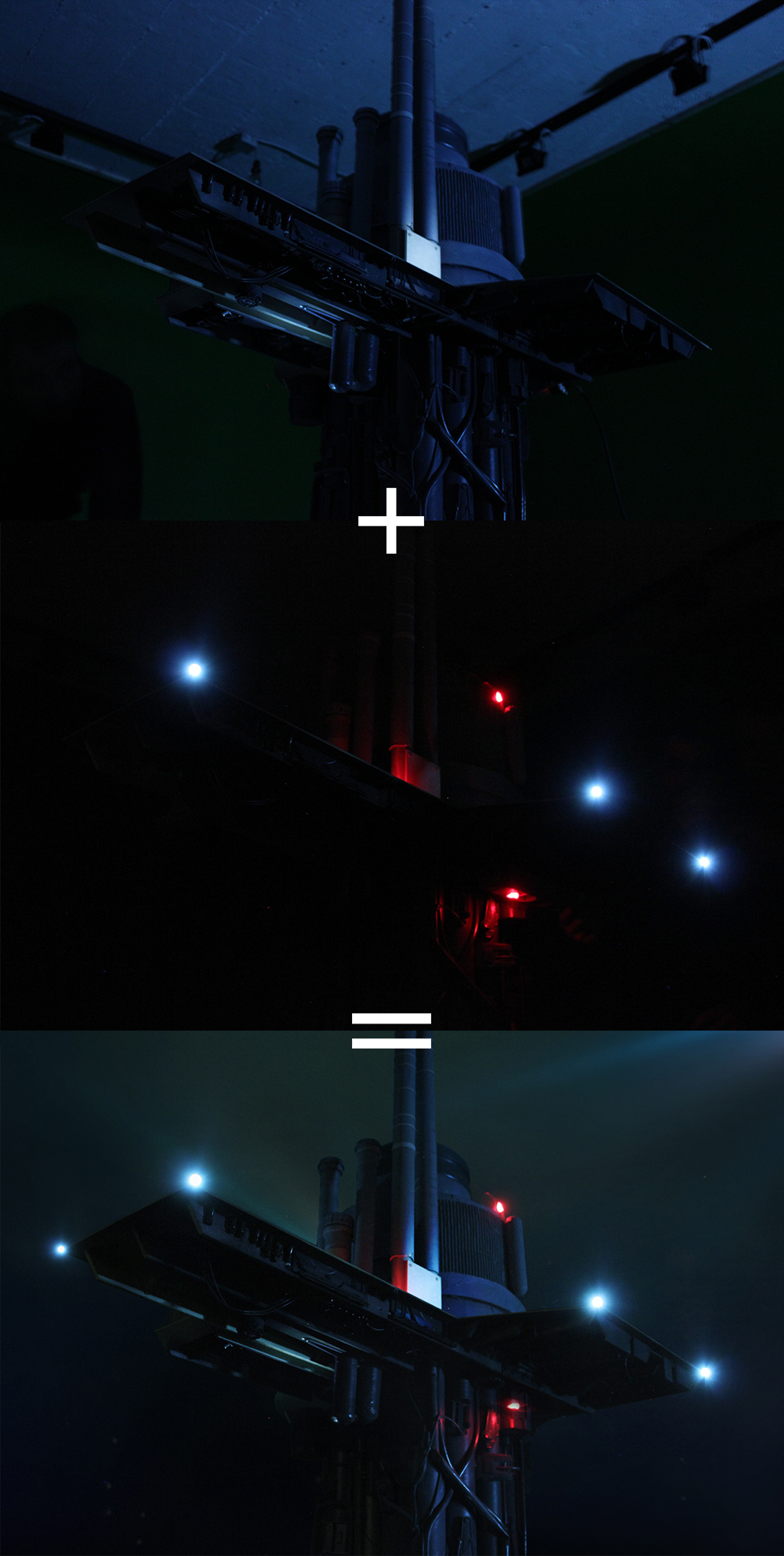 Ok, I hope you like it. Today we'll detail the upper side of the building. It will be in many close-ups so we'll take our time with it

Looking very good...and more smoke I know, I know, it was just a test. Are you going to try to reproduce the smog on those shots?

Thanks!
Sure there'll be lots of smoke and fog, it wouldn't look as good without it. We'll get a smoke machine when time comes, maby even for the next test.

When you're done, you need to hang Moffeaton's blimp above it.

Oh, God!!! I followed (lurked) his Blimp build thread for years, even before I was a member! It would be mindblowing to see it above my sushi bar.. One can dream though... :lol

Of course, since I'm working from a bad resolution photos, I only copied the main shape and made the rest of it up. It is not finished yet, Ill put some more details, and put the "gas tank" on the roof. 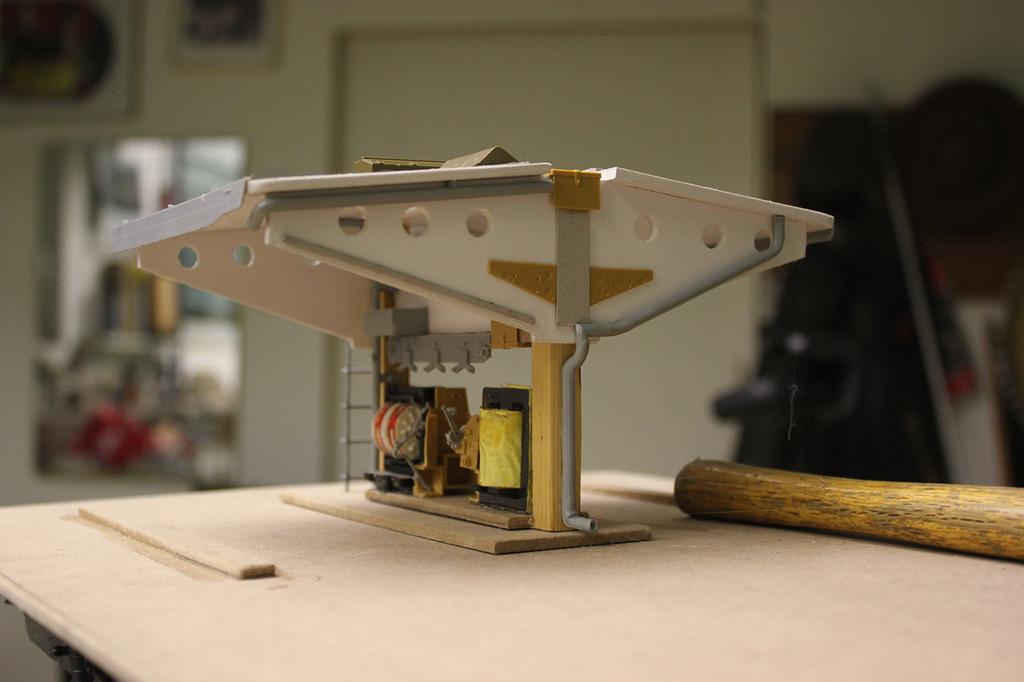 Here is another angle. I used mostly computer parts and some kitbashing from tank kits. 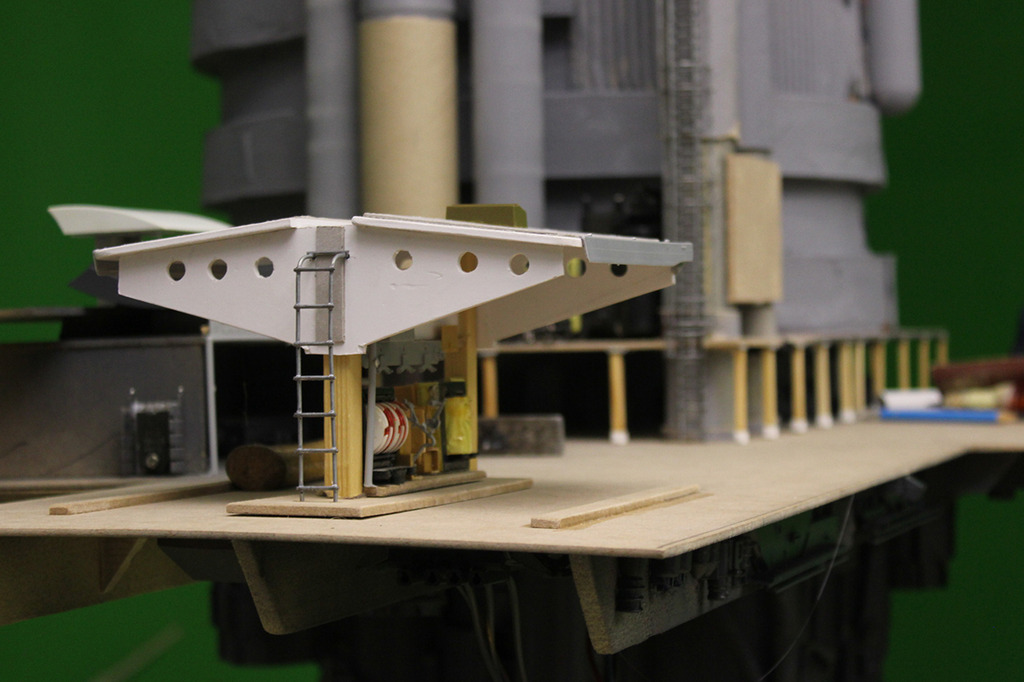 Meanwhile, a friend made the ladder and safety frame for it (google says its called cat ladder??). It leads to the top of the billboard that is not yet attached here. I'm totally sure there was no ladder on the real model but I wanted something interesting in that part so we improvised.. :$ Most of it will be hidden behind the billboard, anyway.. 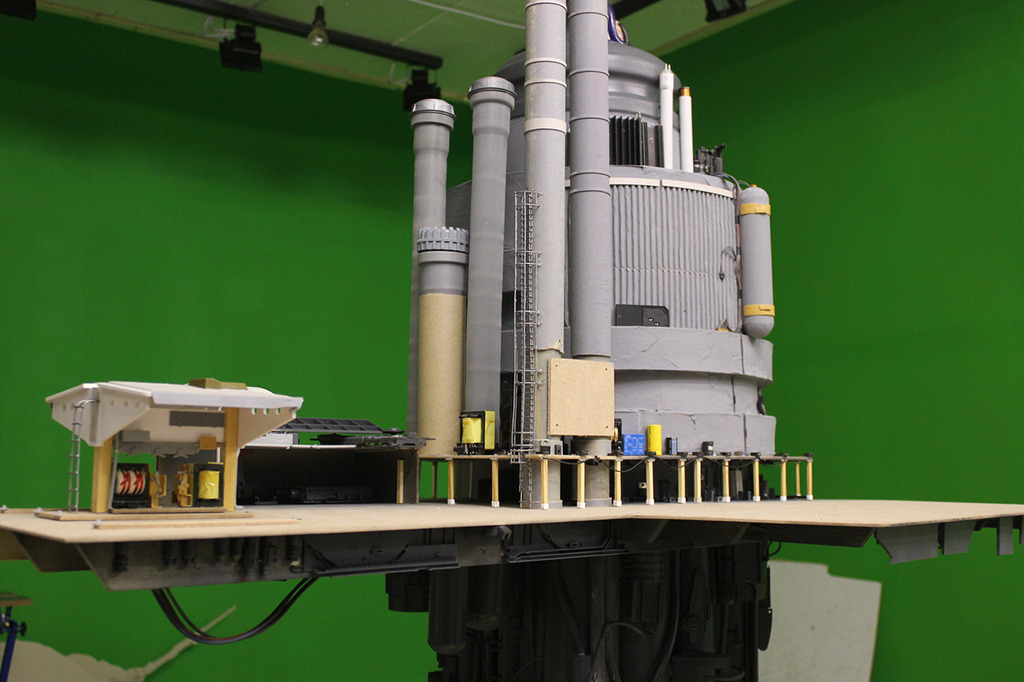 Here you can see where the billboard will go: 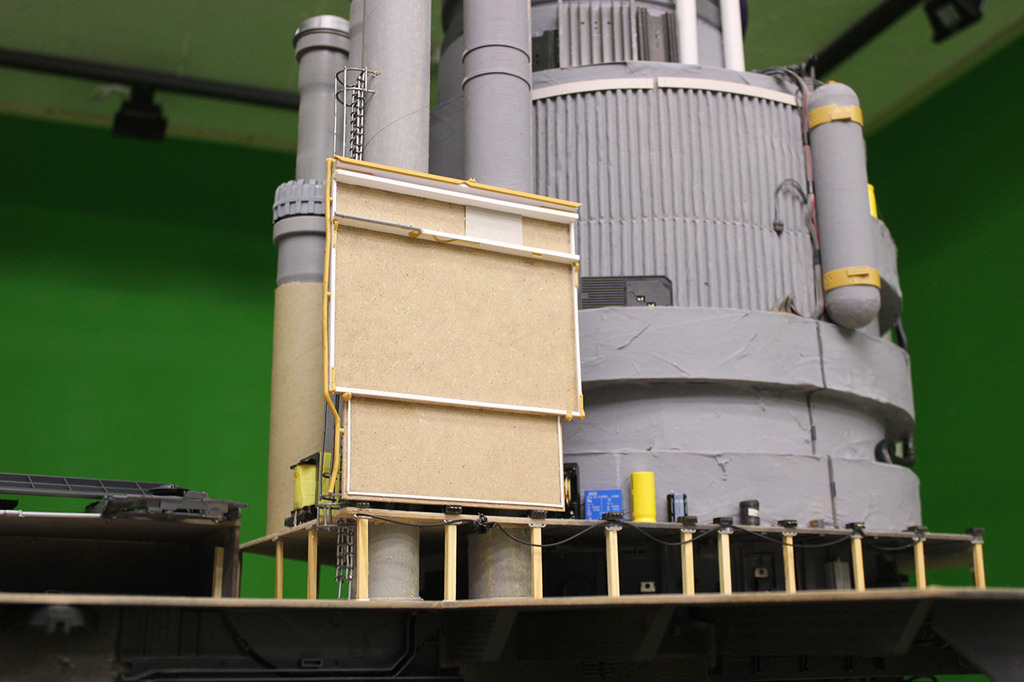 And, traditionally, a quick christmas-lights-test-composit for the end of the post . (The gas pump will never be this close to the camera in the film) Its amazing how much the lighting matters. You can get away with anything with good lighting. (Which comforts me :lol) 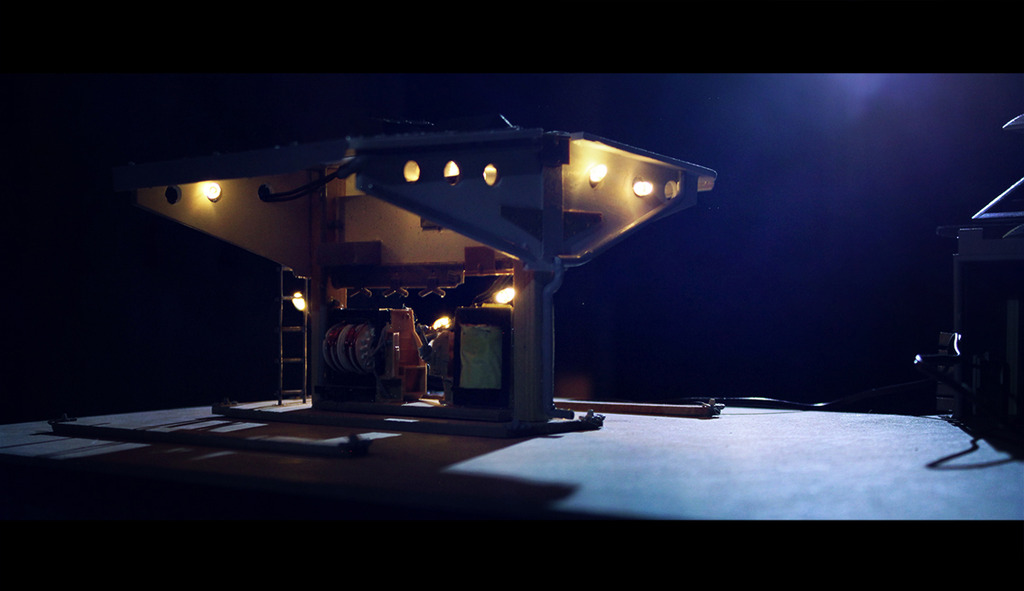 That's it for now.. Another couple of days of detailing, and then paint.. I'll post when I have something new.
Thanks for looking and commenting!

Very cool! I always loved this hidden gem in the film.

Yesterday at 9:40 AM
joberg

Post pics of your own 3D creations (not purchased)
2 3