For the past year or so, I have been working on a digital model of the Ghost from the Star Wars Rebels, and I'm finally getting to a point where I'm pleased with the overall shape and accuracy. The idea is to use the digital model as a blueprint for a "studio scale" model.

I haven't been very active on this forum, but I've admired the work of all the artists here for many years! One of the really big eye-openers on this forum for me was DaveG's open source y-wing. The idea of an open source project in this vein really resonated in me, and that's why I made this post: to gauge interest in open sourcing this.

The model is made in Fusion 360 and I've used stills from all the seasons as reference; mixing and matching to get what I personally find to be the definitive version. 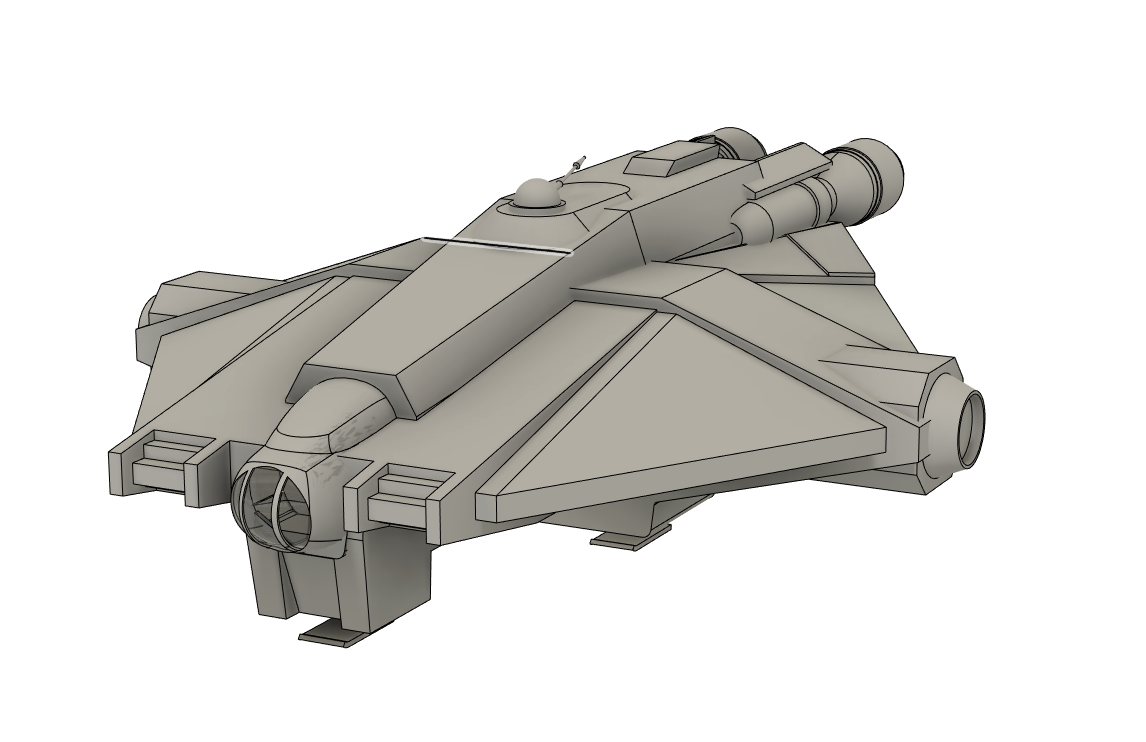 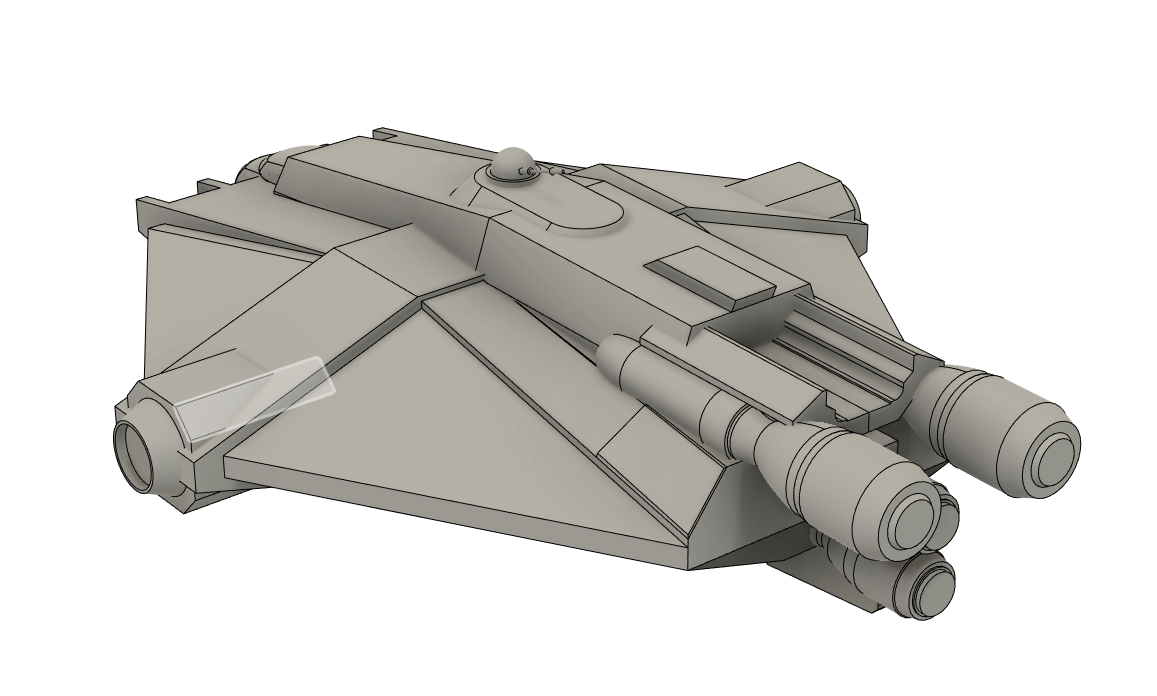 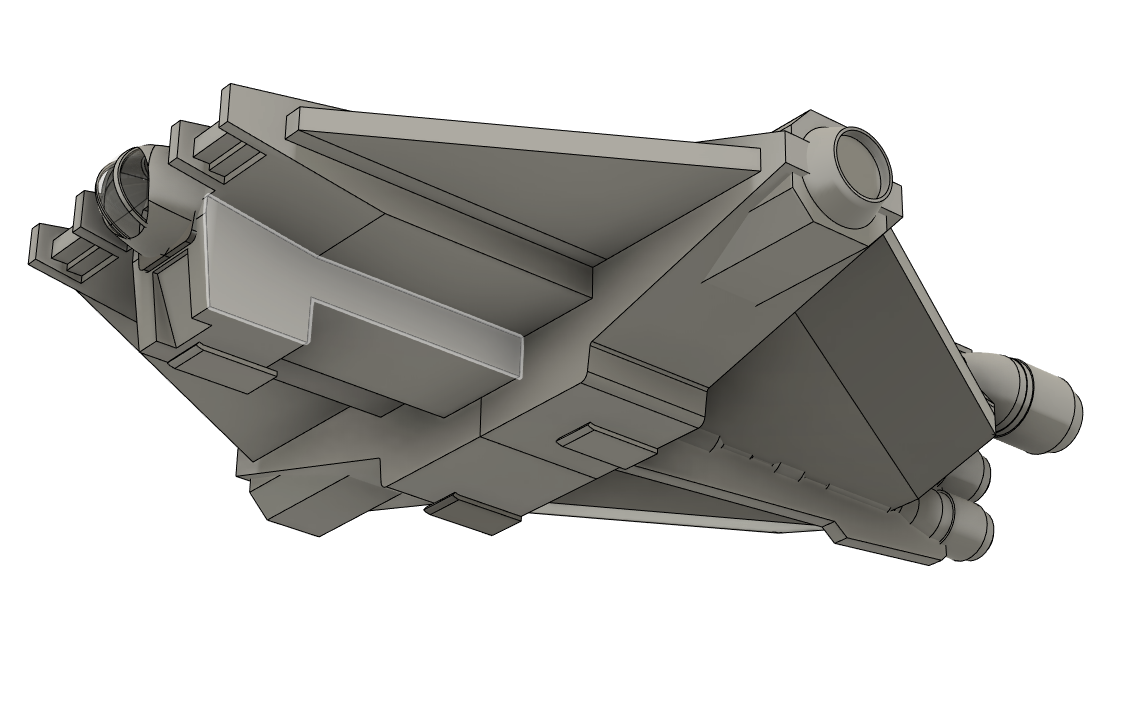 "The idea of an open source project in this vein really resonated in me, and that's why I made this post: to gauge interest in open sourcing this. "

I would love to participate. My desired scale would be 1/72

I would love to contribute as well.

Do you plan on setting up a "team" in fusion 360? If not, a STEP export would be amazing to work with.

She looks awesome! I would love to turn it into a paper model.
C

This is fantastic! I'd love to help somehow. I have some CAD experience, I could probably assist in cockpit interiors and some of the detailing. I'm not the best with greeblies, but practice makes perfect!

I'd love to help! I'm in Blender, but I can help with some modeling and panel lines.

Are planning on adding a removable shuttle (forget its name) in the back? I think that would make for a nice touch.

Sorry about the late reply. I have moved into a new apartment, handed in my thesis and started a new job so my mind have been quite occupied!
I'm really happy to see that so many of you would like to participate

I'm not sure what the best course of action from now on would be. The files are in Fusion 360 but I'm assuming only a minority have access to it anyway. Blender could be a good alternative as it is free, but this is an open source project so the decision should be collective. What do you think?

The Phantom (both I and II) would be a nice touch indeed, and will definitely be added later. Whether by me or someone else remains to be seen.

Here's a link to my Google Drive. In it you will find a fusion360 archive that can be imported directly with the aforementioned software. Please be aware that I have used this project to learn CAD, so expect more than a few bad practices and odd solutions. Also included is an export of the model in both fbx and obj formats.

If you ever use this model in a project, my only request is that you post an image of it here. Reuploading any changes you do is also highly encouraged.
S

That's brilliant. I've done exactly the same on Fusion 360, and I must say our designs are extremely close. I started this project about 2 years ago, with intent on building a 1/43 scale 3d printed kit. It's huge and is over 1meter long. Full interior and lighting/motorised ramps etc. While this version is slow going due to complicating everything with detail, I decided to re-scale it down to 1/72 for a quick build that would fit in with a 1/72 Falcon kit. It's still quite large, and I've slowed down on it because, once again, I feel the need for lighting etc. It's too big not to at least light it up.
I used the best 3 view plans I could find and set them up for a full sized design on 360. I used the official figures from wookiepedia. Whilst being amazingly close to your design, I opted to make the nose gunner window the oval shape, rather than the cannon round shape. I just think it looks sleeker. And the only model anywhere near accurate, except Randy's masterpiece , was the star wars xwing miniature, which also has the oval window.
The STL files are posted on Thingiverse if anyone wants to have a go. It was designed for a 200x200x230 print space. This was printed on an Anet A8.