RPF PREMIUM MEMBER
Sort of like the thread about phasers that's been going for some time now. Let's see if we can catalogue all the tricorders from Star Trek, both screen-used and replica.

I'm not sure about all the variations and replicas out there (and I must admit, my TOS knowledge is a bit lacking), but here's a preliminary list of all the screen-used tricorder versions I can think of:

RPF PREMIUM MEMBER
Here's a few to get the party started.

RPF PREMIUM MEMBER
A few from my own collection

I knew Phasepistol would have some nice pics.

Here are a couple of mine: 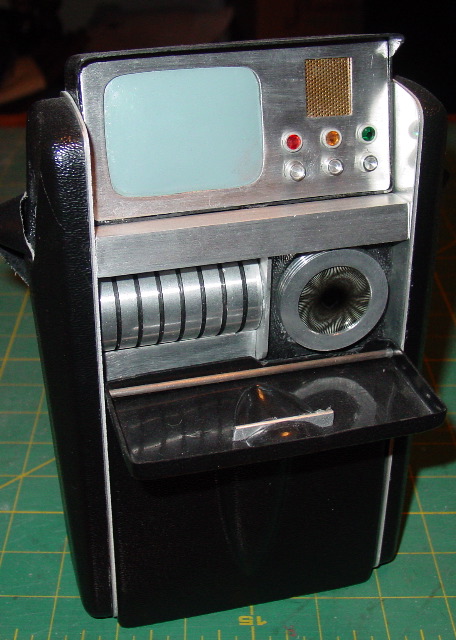 is a mystery vintage version. 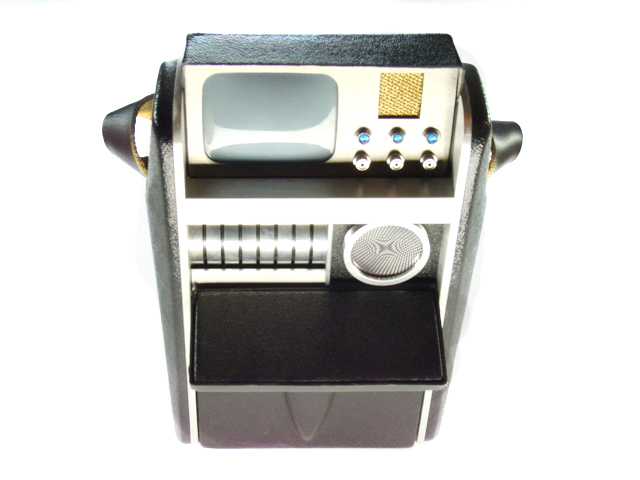 So nice.. Does anyone sell a static kit of the Nemesis tri?

Here is the tricorder from Star Trek VI.

Man, i have such a hard time getting behind those movie tricorders. Just never liked any of them, until the next gen movies hit. Dunno what the deal is. I don't think I'll ever collect them, despite the completist bug in me.

RPF PREMIUM MEMBER
Ah yes... the Next Gen movies, which brought us the wonderful "Mister Tricorder"

... and the above noted "Nemesis" PADD looking thing. :unsure

RPF PREMIUM MEMBER
A few more for you tricorder junkies...

...the "Endgame" tricorder seen in the final episode of Voyager:

What is the deal on the "Endgame" BTW... is the antenna missing on the second shot? Or just folded down?

And is it the same piece as on the DS9 prop? It looks smaller....

IIRC, there was a science and a medical version of the endgame. The med one had the swivel up arm. So, the second pic could either be the med version with the arm down, or the science version.

There was also a tricorder seen in one episode of DS9 that had a working TV screen in it. Kind of a mix between a mark VII and something else. The ep was where dax was dorking about with the klingons or something.

Here's that transitional Mark VI science tricorder seen in Year 4 of TNG... it has a smaller detachable scanner.

In TNG "The Enemy" we get a quick glimpse of a tricorder being internally modified... the lower panel in the scanner-cutout on the back is being replaced in these shots.

Here's that oddball DS9 tricorder with the big screen... this is not my screencap BTW. What episode is this from?

RPF PREMIUM MEMBER
Now this is a bizarre one... supposedly a "prototype" TNG tricorder, sold in a Profiles auction a few years ago

And here's a shot of the Mk VI and VII, from the book Art of Star Trek, I believe it is. Note the upside down decal on the VI.

I've seen some veiled references to a "23rd Century Recorder" kit, which looked consistent to the "23rd Century Pistol" phaser kit. I've never been able to find concrete information on it. Anybody else heard of or seen one of these?

I have one of those kits. Nice actually. No strap came in my kit, but other than that, its a pretty darn close copy of the Rodd.com version. Not sure of the timeline, of which came first, I think the 23Cs came first.
S

RPF PREMIUM MEMBER
The Voy 29th century tricorder I have is a modified Oregon Scientific clock... I think mine is the correct model, not entirely sure (there are other clocks that are close, which you can still buy).

Iee. What happened to the bottom of that poor tricorder? Is that a switch? Why is the paint so distressed? And what's with the black bar underneith the second graphics?

its just a part where he needs to paint i would love to have a working one of those one day i can get the clock but have no heads or tails for the circuits and putting it together, i would love to buy one complete

Originally posted by Jedi Lawja@Mar 3 2006, 06:11 AM
Iee.Â  What happened to the bottom of that poor tricorder?Â  Is that a switch?Â  Why is the paint so distressed?Â  And what's with the black bar underneith the second graphics?Â

Yeah the builder wasn't too precise on that one... :rolleyes

It could be fixed up I guess, I'd have to strip it, plug the hole, repaint and redecal... haven't gotten around to it.