Aaaaaaand the trailer is here

It's just a trailer, but that looks surprisingly good.

RPF PREMIUM MEMBER
Looks like theyre going with the idea that there have been multiple Matrix's and its all happened before...this is another go round.

I love the first Matrix, seen it probably 30 times.
I hated the sequels.
This looks really good.

I don't trust trailers. We'll see what happens when it hits theaters.

RPF PREMIUM MEMBER
The level of hype this movie needs to live up to is palpable lol.

Excited to see this, still can't believe it's coming incredibly soon too!

RPF PREMIUM MEMBER
Being bombarded with visual effects laden movies it's hard to be impressed with much these days. The cinematography looks nice, and the Wachowskis are known for that so that's to be expected. This looks par for the course. As for how good it looks as a story I have no desire to see more. It doesn't look bad so much as I simply felt nothing when watching the trailer. Didn't Neo die in the last one anyway? Ugh this just screams corporate meddling more than anything else. When it comes to reboots and sequels it's literally "Use it or Lose it." I'm going to start referring to movies with this category from now on.

That little tag at the end with the corporate lackey just screamed more of this meta awareness that I can't stand. Why does every major franchise have to essentially wink directly at the audience? It's not necessary to remind the audience of the brand every chance you get. Yeah, I remember the Matrix. I have a sneaking suspicion it won't be the only obnoxious callback that will make it's way into the story.

Keanu and Carrie both look great. They've aged nicely. Morpheus has had a LOT of work done. Seriously though, no one can replace Lawrence Fishburne. His performance in the first movie is iconic.

This never needed to be a franchise. It should have been one stand alone movie.

I had almost the exact opposite reaction. There's something really affecting about seeing an old hero getting back into it, especially given the type of self realization that this story will inevitably entail.

I used to agree that the second two movies didn't need to happen after how masterful the first was, but then I think about my original reaction walking out of that first movie and it wasn't entirely positive. On first viewing I was definitely thinking more about how it lifted themes from movies like The Terminator, but on subsequent viewings came to really love the stuff that OG Matrix did. So, while those other two films aren't my favorites, I don't hold any particular ire for them any more.

This trailer hits enough nostalgia beats from the first film (I'm not sure that isn't the same rooftop tbh) and the question of "Why is this happening again?" seems intended carry the old fans through the whole thing, while audiences who are too young to have seen the original might be intrigued enough to go back and visit it. Keanu is probably a big enough draw on his own to get new folks in the seats after his resurgence in the last half decade or so.

RPF PREMIUM MEMBER
I found the lack of green filter during the scenes in the Matrix somewhat disconcerting.

Axlotl said:
I love the first Matrix, seen it probably 30 times.
I hated the sequels.
This looks really good.
Click to expand...

However the movie turns out: this trailer kicks ass.

I'm guessing Keanu was filming this and the next John Wick at the same time which is why he still has the John Wick look.

RPF PREMIUM MEMBER
Nostalgia alone is a crutch for weak story telling. So if they are banking on it heavily that's not a good sign.

That said, this is just one trailer and you just don't know the outcome until these things are released for public consumption.

It makes me wonder if anyone at all is actually clamoring for more Matrix stories or if this is just a fun throw away retro movie?

kalkamel said:
I found the lack of green filter during the scenes in the Matrix somewhat disconcerting.
Click to expand...

Narrative makes sense though - the end of The Matrix: Revolutions showed that the rebooted Matrix had Sati the new sky/sunrise programme.


Psab keel said:
Nostalgia alone is a crutch for weak story telling. So if they are banking on it heavily that's not a good sign.
Click to expand...

New film looks interesting and it's not another Marvel movie, so I'll give it a shot. I think there will be some fan service, but it's clearly a new Matrix cycle again, so makes sense there is repetition. Deja vu, remember?

RPF PREMIUM MEMBER
I guess. There are movies and shows that aren't tent pole franchise blockbuster comic books though. It often feels like that's all that's made anymore. If the best anyone can hope for is a reboot of a nearly 20 year old property then I'd say the industry is in a sad state.

I don't even remember the Matrix sequels very well at all which speaks to their lack of impact on me.

It would be nice if a filmmaker actually used the heart or spirit of the original as the callback in a reboot leaving out most of the nostalgia, gimmicks, plot repetition and nods.

The original Matrix film was edgy and original. What's edgy now are films with excellent character development, intriguing story, outstanding direction, exceptional acting and amazing writing. If this film has those things it could be great, if not it will be yet another boring member berry.

It's probably just another rinse and repeat outing.....seriouly where can it go....???

Even if Neo ever did escape the pod of goo and as I understand it he never does (even the idea of Zion and visiting the machine city are still experinces while he's in the goo) it's a lost world. The machines rule, every one's in a pod of goo dreaming.

The only otpion would be for Neo to truly get out of the the goo pod and escape to the scorcthed earth where the sun still shines above the blackened sky. They see it briefly above the clouds when on the way to the machine city.

Anything else would be another dream experience while still in the goo....rinse and repeat....an action flick where nothing really changes. 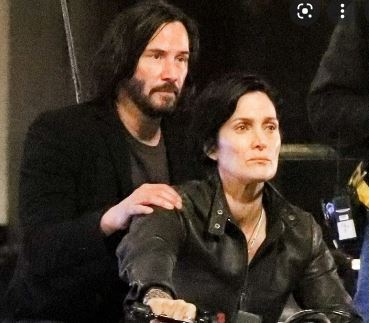 RPF PREMIUM MEMBER
Loving the look of it, and very excited to see what is done with the existing characters.

Have a few ideas of my own as to the whys and wherefores of it all.

Guardians Of The Galaxy Volume 3
2