RPF PREMIUM MEMBER
Hi everyone,
I've just received a commission from collector Wayne Middleton, to update his Studio scale BOP into a wing up, landing configuration from "The Search For Spock".
The landing gear bay doors have been cut out, and the wiring loom has been stripped back ready for some mods as well, maybe lights inside the gear bays. No easy task as the Steve Neisen model is well cast and very thick, which means I will need to "slim down" the doors so they don't have a six foot scale thickness to them !.
Ill post images of this transformation in the next day or so.
I have a question to anyone out there who may know or think they know the origin of the landing gear parts. I am thinking the main feet of the bird were made from some kind of half track or scout car body parts, maybe the M3 scout car or a variant of.
I don't know if the front detailing on the feet (the round parts) are part of the original moulding (which would identify the part easily) or something added for detail during construction. I am now about to trawl the kit scan pages.
The landing gear will not be load bearing as the bird will be posed in an almost touched down pose on a stand. I am guessing I will scratch build the feet mechanics out of brass and ally to match these images as much as possible, unless someone knows different. I
mage 1 is from the modeller magic site reference images.
I'm not sure where I got image of a smaller scale model from (apologies if it's someone on here, please let me know who you are if it is, as I would love to get some more angles on it), but it seems to show a "fairly accurate" close up of the main assembly and landing gear door configuration.
Any input would be gratefully received.
Thanks guys

I've got nothing to offer you except my enthusiastic support for your project. next to the refit and the TOS E, this is easily my favorite trek ship.

RPF PREMIUM MEMBER
Today I've trimmed off the landing bay doors a bit more and slimmed them down with my angle grinder, but I think they will still look a little odd. so I've decided to scratch build some thinner versions which will be full of detail internally. I have some Perspex dome shaped things and found a fairly good match. I think once the doors are in their open position they will look to be the same radius as the lower bulge. The stand is completed in rough, enough to place the model on and test the height etc. ill be using this for support while I'm doing the paint job as it will be the final thing to get painted.

If this looks familiar it I because it was built by Neo-uk last year, but it suffered from some cacking on the wing seams due to cold weather and this prompted its owner to have a bit of a refurb. You should check his build out at http://www.therpf.com/showthread.php?t=231469&highlight=bird+prey its a good one.

so here are a few images from the butchery and welding of today.

the side panel details on the domes are different left to right which will make some asymmetry to the secondary doors which may look a bit weird, ill check that next time.
That's all for now. cheers

RPF PREMIUM MEMBER
Having not STARTED mine yet (lol, typical studio scale comment I know) I am curious to know how/why the wings cracked, so I can avoid that damage on my build?

Love what you are doing!

RPF PREMIUM MEMBER
HI Moffeaton, (love your work by the way )
I'm not to sure about the wings yet as I haven't stripped them down for examination, but it looks like they were done with two part epoxy and it hasn't made a decent key to the aluminium armature. I am pretty sure I will find a smooth ally surface when I get to that fix. but couldn't be 100% at this time. It happened over winter here in the uk, so it could be a combo of cold and hot contraction and expansion. Ill post some clear images of this when I've broken them down (as much as I dare). Ill be using CA all the way on the wings with some clamps on a well sanded and scuffed surface for ultra grip. The wing panels split along the leading and trailing edges where the top and bottom panel fit to the armature. If I feel the CA route isn't as good as needed I am thinking of some small CSK set screws tapped into the ally and countersunk into the resin panel just for belt and braces, but it is a route I would rather not take as they may introduce a slight wiggle to the form where they apply pressure. We shall see.
You got my interest up just then so ive takena couple of shots with my finger in there. cant attach images on this for some reason , so ill post below

looks like it is a simple adhesion issue with a smooth surface, gonna be a tricky one separating the panels for a clean and scuff up. That should be fun !! -)

RPF PREMIUM MEMBER
An easy fix, and something I might have done innocently enough in my build! Thanks for the info!

I started with a bunch of Ally and Carbon rod parts from my kitemaking days, just to get the stiffness for the landing gear. I started by drilling and bolting a square section to the armature and bolting some nice large ally parts internally.
Then test fitted the lower body again to see how I can make it modular, so it can always be taken apart if needed in future.

These lovely parts are holding some 8mm carbon tube. These now lead into smaller carbon tube which fits perfectly inside the 8mm tube.

this is a positional test to see if the angles are right and the foot stub axles will be parallel.

RPF PREMIUM MEMBER
next it was onto the landing gear itself.
some rc parts and some testing later I made a batch of 1.5mm hangers which sit on a ferrule to fit over the new landing gear stub axles.

I scratch built the main feet from the same 1.5mm plasticard and built up the central axle with some ally ferrule detailing, and test fitted it all together.
Its a bit plain at the moment, but I wont be by the end of the day.

it looks like a bad model of a goose at this stage without its wings and head.
onward to todays jobs now. more soon

RPF PREMIUM MEMBER
Well another day into the build. Yesterday was a feet day, concentrating on getting some detailing inside the shells of the feet ready for the top panel to go on.
I kitbashed as many parts as I could find which were duplicated 4 or eight times. Then I hit it with a thick layer of silver to provide a texture to the surface. This was then hit with a Matt Black spray, left to go off, then hit it with a kitchen tissue soaked in thinners to strip back the black carefully to reveal the silver again. I find that if you apply a thick silver undercoat the black paint strips off leaving more texture adding some extra surface detail and scale. This will be the pre shading for the final paint later on after fabrication is finished.
Hope you guys like the way its going.

I took some artistic liberties on the bottom of the feet, as I felt the radial type design (on the image at the star of this thread) was likely to be a quick idea from the kit makers to fill in an area which they had little or no reference to, therefore I went with a more detailed foot plate from a pontoon bridge kit I had in the greebly box, this will have moe pads fitted as it gets more complex.
Todays jobs are, filling and sanding the top feet to a nice standard, then detailing those surfaces in prep for painting.
More soon

some more work done on the feet today, I'm trying to keep it a much like the black and white photo as I can using the highlights as a guide. I think its getting there, just a few more greeblies to add, then onto the landing gear doors and bays.

Whether they are 100% accurate or not - they look killer easily detailed enough to have been on screen.

RPF PREMIUM MEMBER
Cheers Jedi Dade.
Another day goes by, here's what I did today on the big green monster.
The landing gear bay doors are almost done, just a little more detail to
add to them.

There is a secondary main landing strut as well as the door actuators and
more detailing done internally
.

The pieces all disassemble for future if needed and are all done in carbon
and all tubing so they will look really nice when weathered back.
I've shortened the legs to the correct length now, so no more spindly chicken
legs, there's another ferrule to go on so the main legs will be slightly
thicker, and some more detailing like the spur on the back of the legs and the
material cover and stuff.

Once all painted up, the only people tat will know that is not the real deal are you and the people that built the originals...

RPF PREMIUM MEMBER
more done. New detailing on the doors and some pipe work. I don't want to overdo it so I think its about there now. Its had a thin dust coat of grey to check out some detailing and I think its there bar a few bits of filler.

I've also made the birdcage things which seem to hang off the undercarriage from some welding wire and a tank wheel.

RPF PREMIUM MEMBER
Another day goes by and I've fixed the wing issues and reassembled the main body for testing the wing positions.
this is a shot with the unmolested kit it in its maximum wing up position with the porche engine covers removed, and the tank body assemblies pressed against the top of the engine shroud.
unfortunately this isn't high enough to pull off the landing configuration, so I've got to do some more plastic surgery.
The undercarriage is only test fitted to this so I can see if it works ok, its looking very nice, but the top of the landing bay doors needs some more detail, as they are quite visible in this position, so ill add more detailing as I get closer to doing the paint job.
next is hacking some off the overlapping fins to get the wings higher. !!!!!
cant post images in this box, please see below

Jedi Dade said:
Whether they are 100% accurate or not - they look killer easily detailed enough to have been on screen.

Agreed 100% Those are pieces of artwork!
N 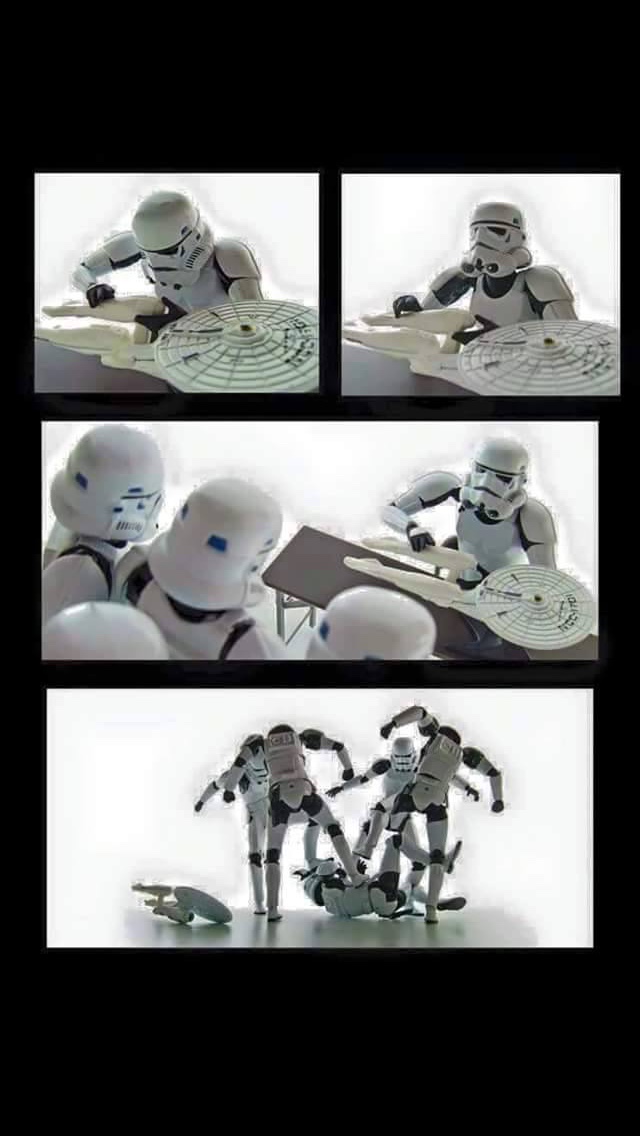