It's a new year and we've lived in our present house for five years, so my dearest wife wants a décor refresh. Thanks to a fest of Clone Wars, Rebels and The Mandalorian, it now looks as if we're on a Star Wars refresh. So the Marvel pictures, statues and figures will be moving from the hallway and stairs to my room and replaced.

First off blasters: Stormtrooper E-11, Rebel Blaster DH-17, and Han Solo's pistol. Not wanting to spend a fortune on top of the range blasters, I'm customizing and repainting toy guns. I was able to get one of the Hasbro DH-17 Nerf guns things, which I am quite pleased with as it looks quite passable straight put of the box. They may not be 100% accurate, but for an initial outlay of less then £60 for three guns, I'll take it. Besides they'll be in a cabinet in the hallway and will only receive a glancing look when passing. They should look passible when I am done


DL-44 Han Solo Blaster
I ordered two. One was the Rubies costume prop, the other was a water pistol. I preferred the heft of the water pistol handle, and I liked that the scope was a separate piece, but in the end I decided to just stick with the Rubies version rather then trying to Frankenstein the two together. I'll save the water pistol for selling on or for another project 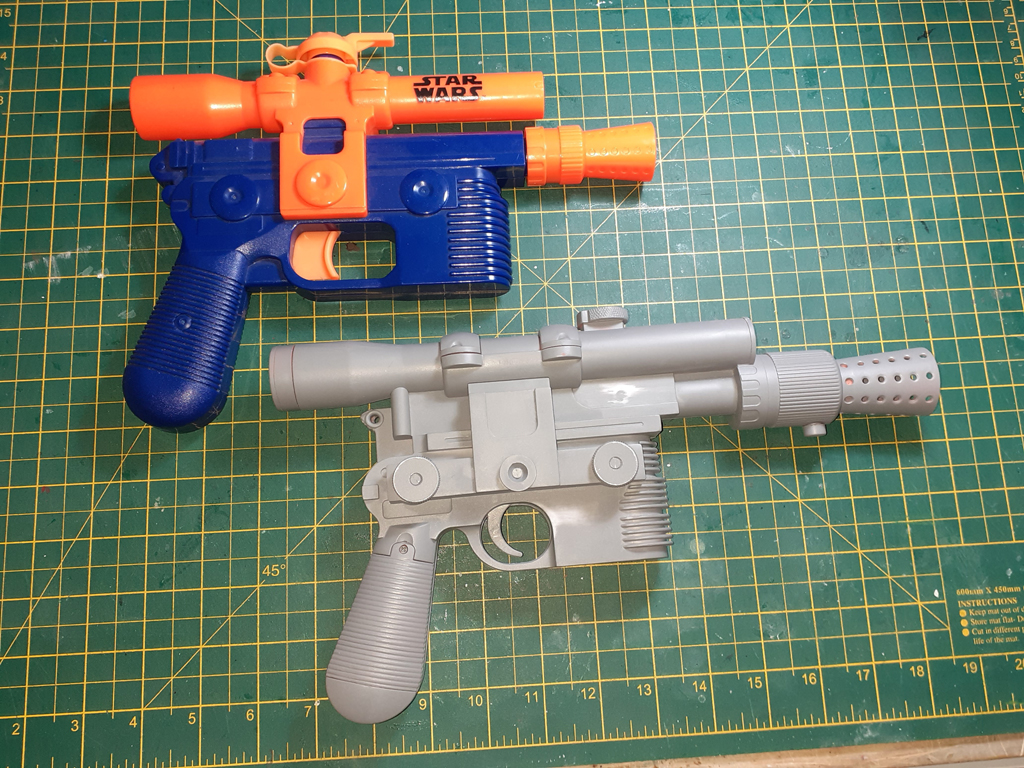 The Rubies model.
Disassembled it. Removed the sound chip and speaker and glued in some bolts to give it a little more weight. Drilled out the holes in the flash suppressor. Sanded off the three fake thumb nuts, and replaced with two real metal thumb nuts. The center one is a washer from a bathroom mirror set, which proved to be a good solid, chunky replacement. 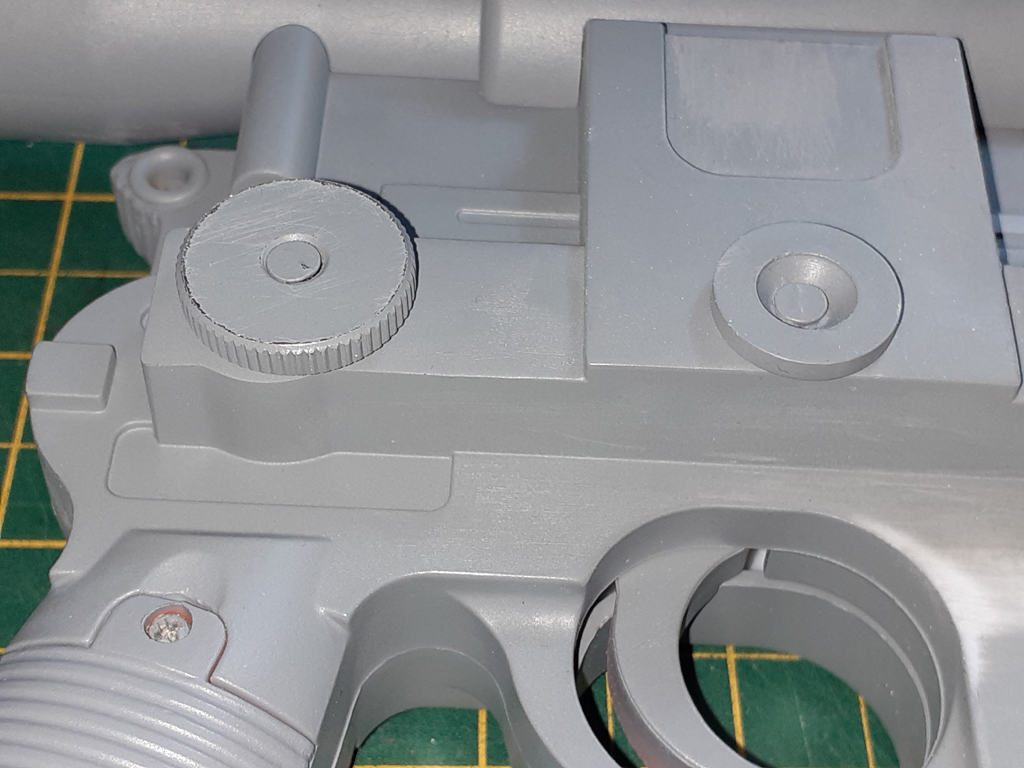 I drilled out the end of the scope and printed off a targeting image, cutting the "lens" from a clear piece of packaging. I scribed around the rim, which I will use as a paint guild later.

I also gave some texture to the knurled nut on the scope buy covering in Apoxy Sculpt, then embossed the knurl pattern by rolling round the Apoxy the head of a screwdriver set that I had. 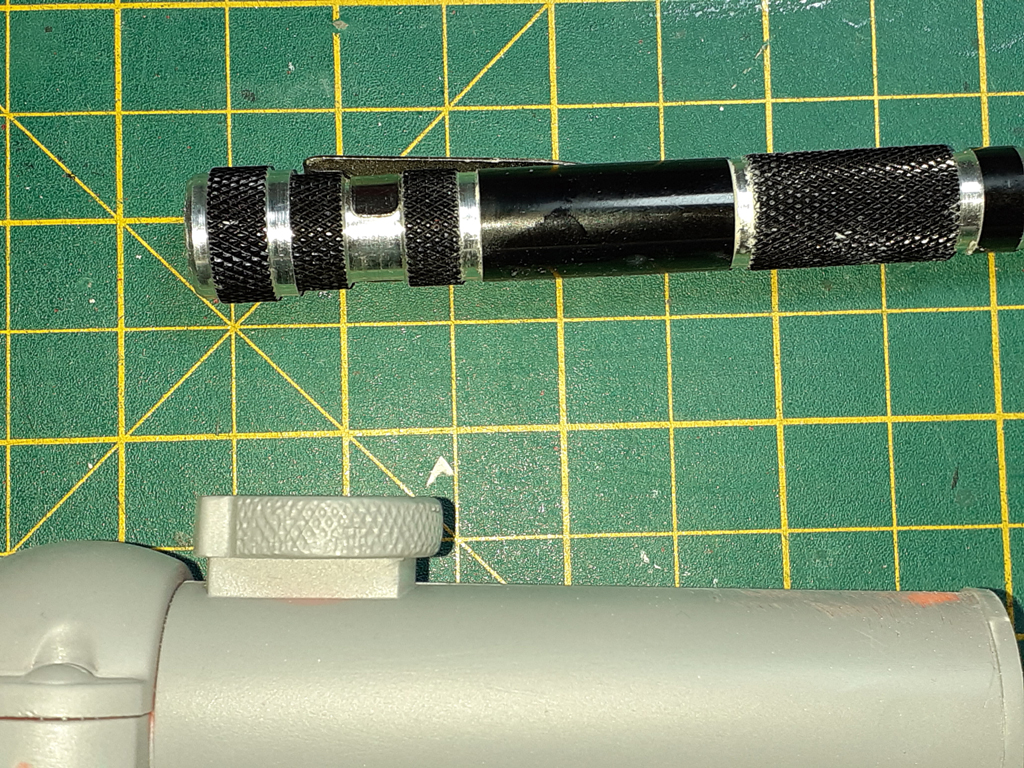 I also drilled a hole in the hammer and glued in a couple of brass gromett eyelets. 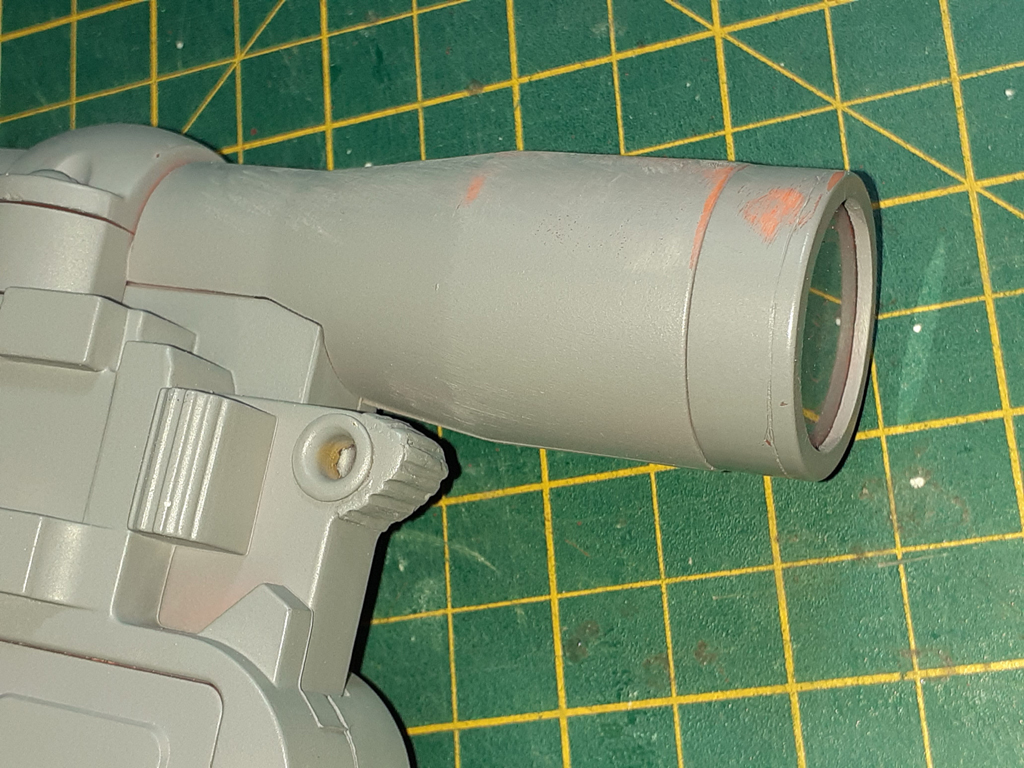 In the handle I also cut out the slot for the shoulder stock attachment and lined it with plasticard.

Drilled out the holes in the barrel, drilled all the places where I'll be adding pop rivets later.

Cut out the rail with a Dremel. Drilled out the end of the barrel and also drill and added a Lego peg to model the adjustment screw. 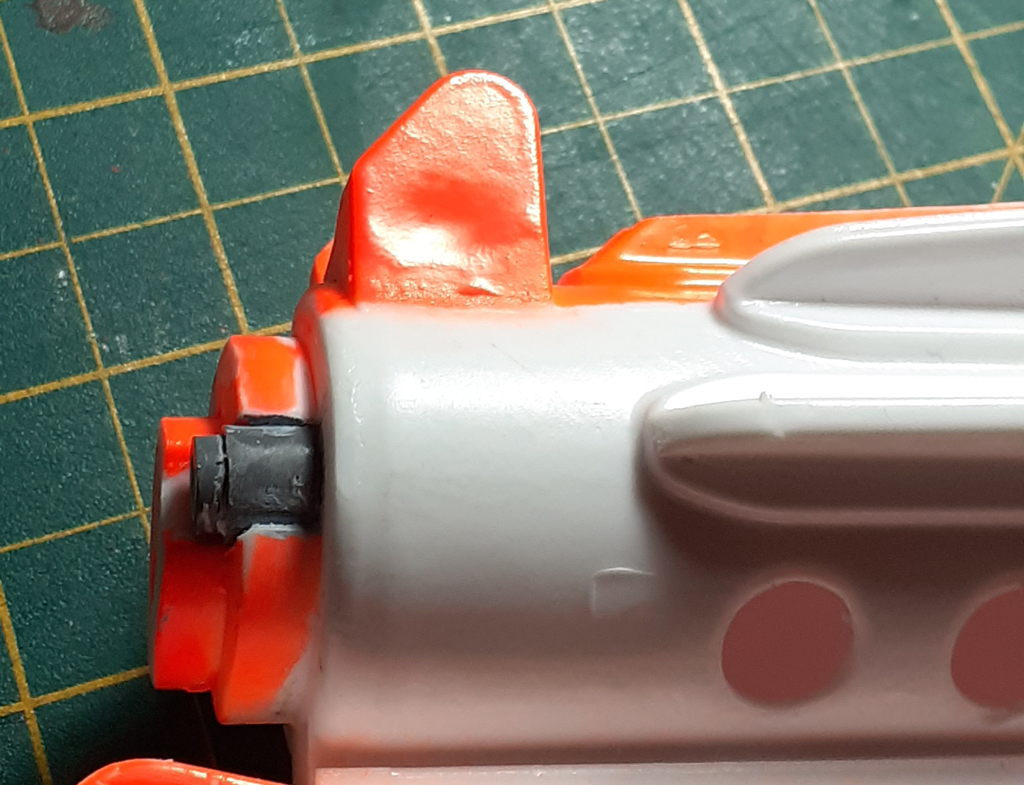 Sanded off the "screw" that was on top of the magazine. The DH-17 Nerf blaster that I also bought has a similar looking screw, so I made a cast of that. That black knob was cut off a IKEA Metod cabinet foot. I had a bunch spare it it looked ideal. 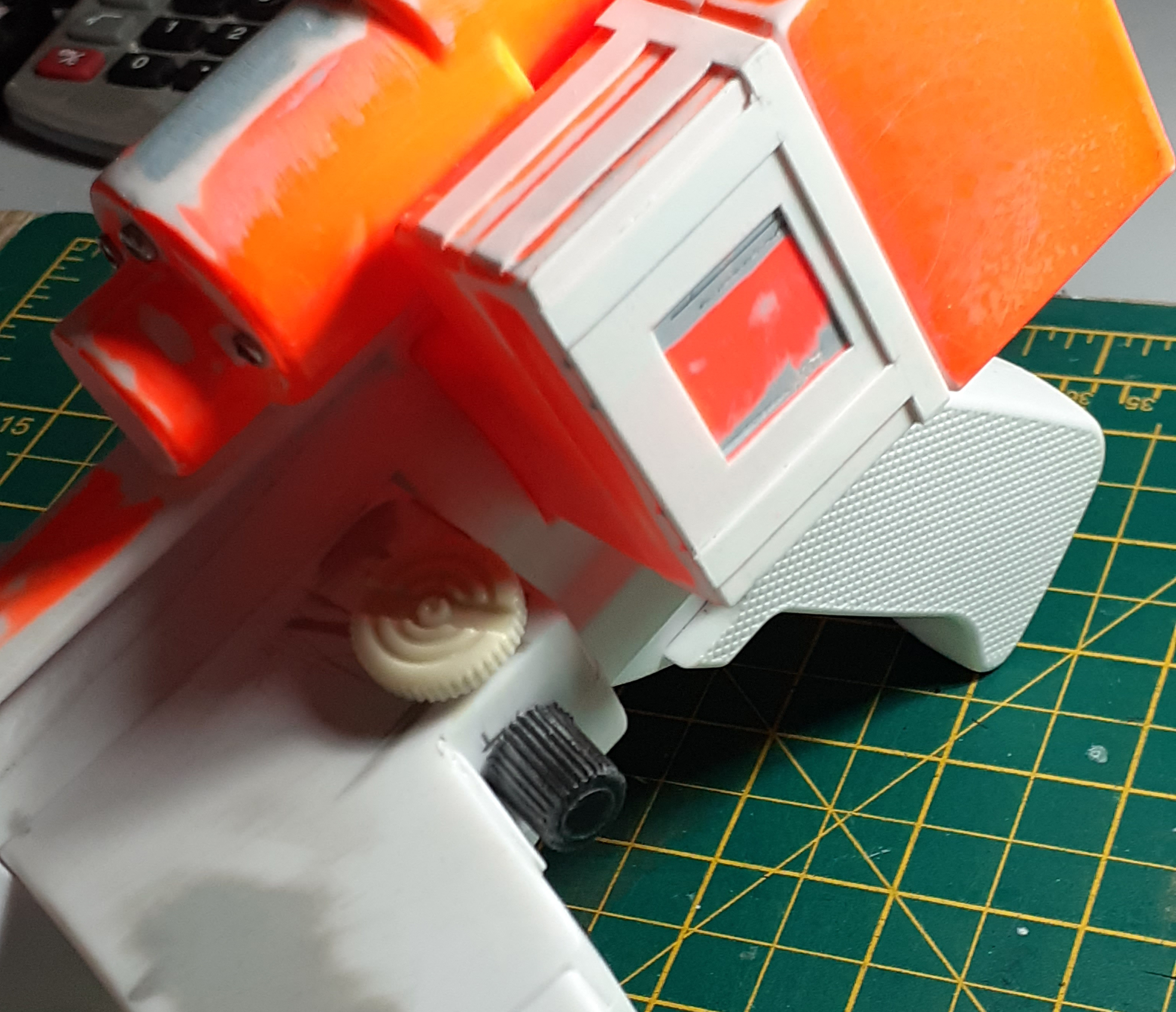 DH-17 Rebel Blaster.
Nerf Star Wars Rebel Blaster £15
This one will require the least amount of work. I pulled back the Nerf rear handle and sawed it off. Filled in the hole and will add the loop. Filled in screw holes. Dremeled out the two clips for holding Nerf bullets and built up the cap with filler. Sanded down all the raised text and logos. 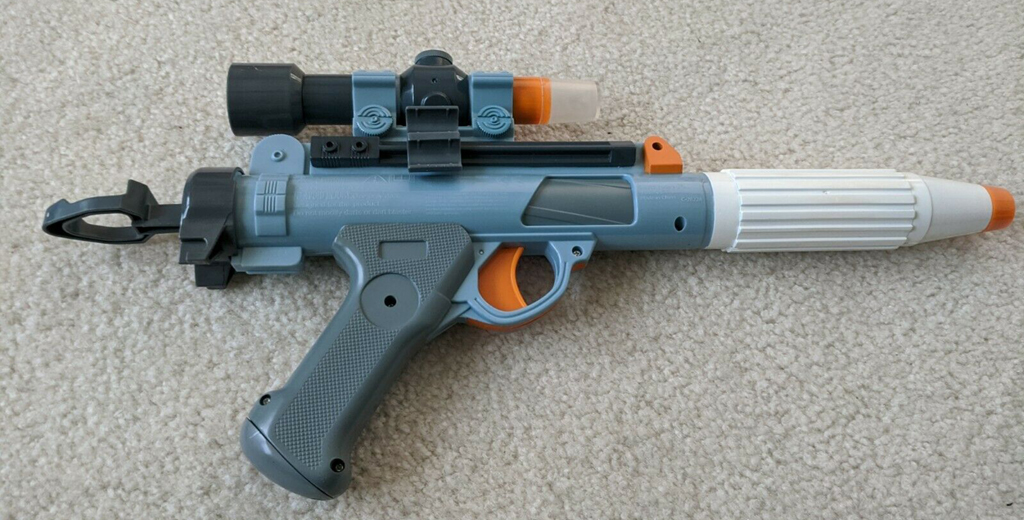 If I can remove the clear end cap from the scope then I'll add in a short red straw of some sort. I still want to use the light up functions, so I won't be correcting the shape of the gun handle at the battery compartment end. 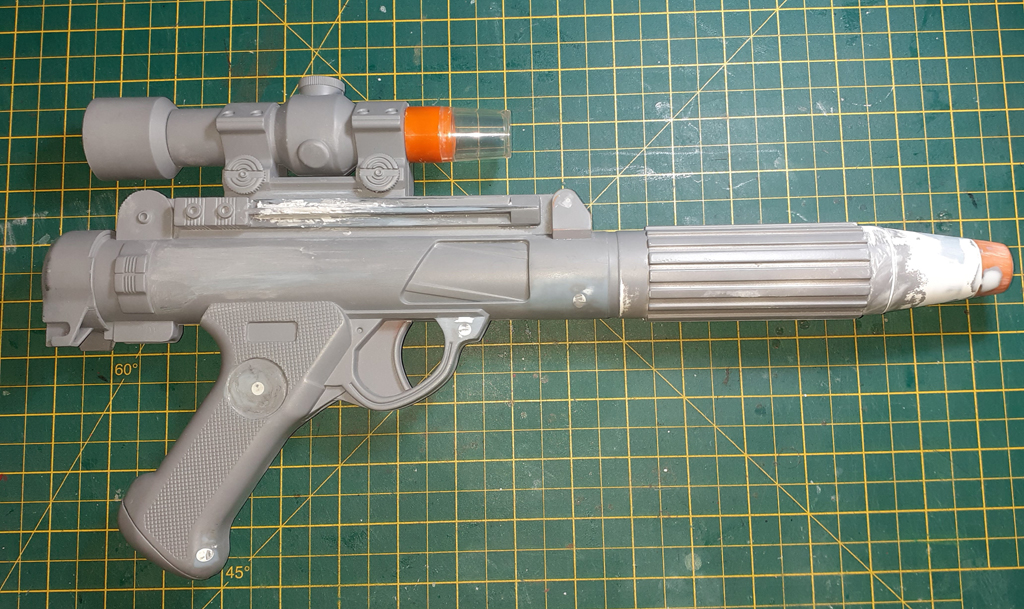 Paint
Some more sanding to do and a final cost of primer before painting. I have a couple of rattle cans of black paint as well as some graphite powder, which apparently will give a good gun metal effect.

Aku said:
If I can remove the clear end cap from the scope then I'll add in a short red straw of some sort. I still want to use the light up functions,
Click to expand...

Some people were able to remove by heating. I ended up melting it. So I replaced it with a cap from an Armor-All spray bottle. I used a piece of translucent red Darth Vader lightsaber from an old action figure for the red rod. I mounted it on some sort of rubber gasket that I had laying around that held the red piece and set in the scope perfectly.

For my DH-17 conversion, I cut off the clear plastic cap with a Dremel-- the seam where I cut it is filled in and painted later so it looks just like it should, anyway. I also used the blade of a Darth Vader lightsaber (I used a Darth Maul lightsaber blade for another DH-17 conversion, either works). To mount the blade I modeled and 3D printed a little dot sight piece modeled after there real scope, but hollowed it out so the scope LED could still shine through. 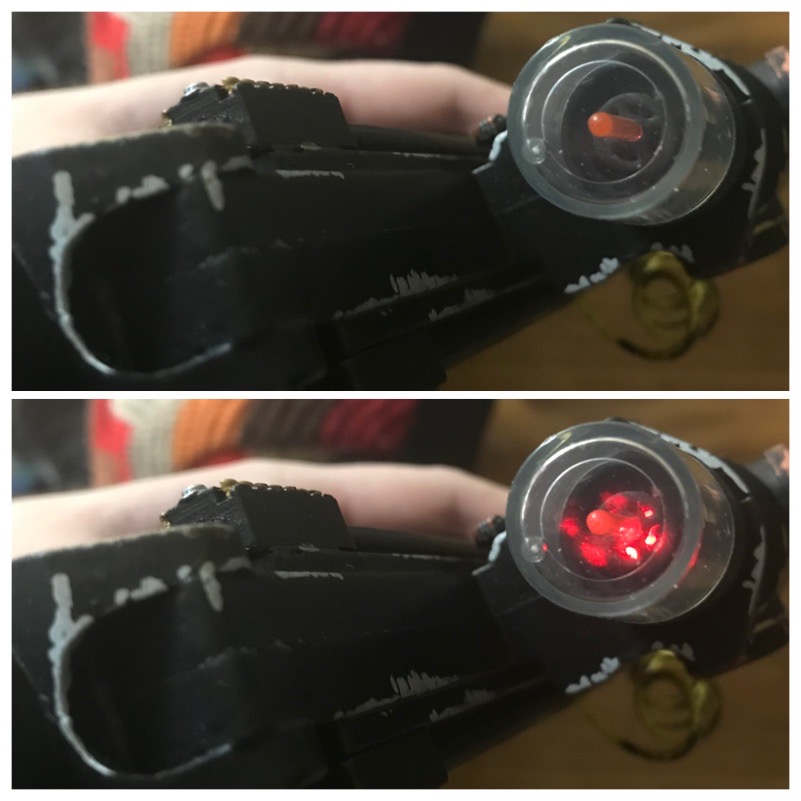 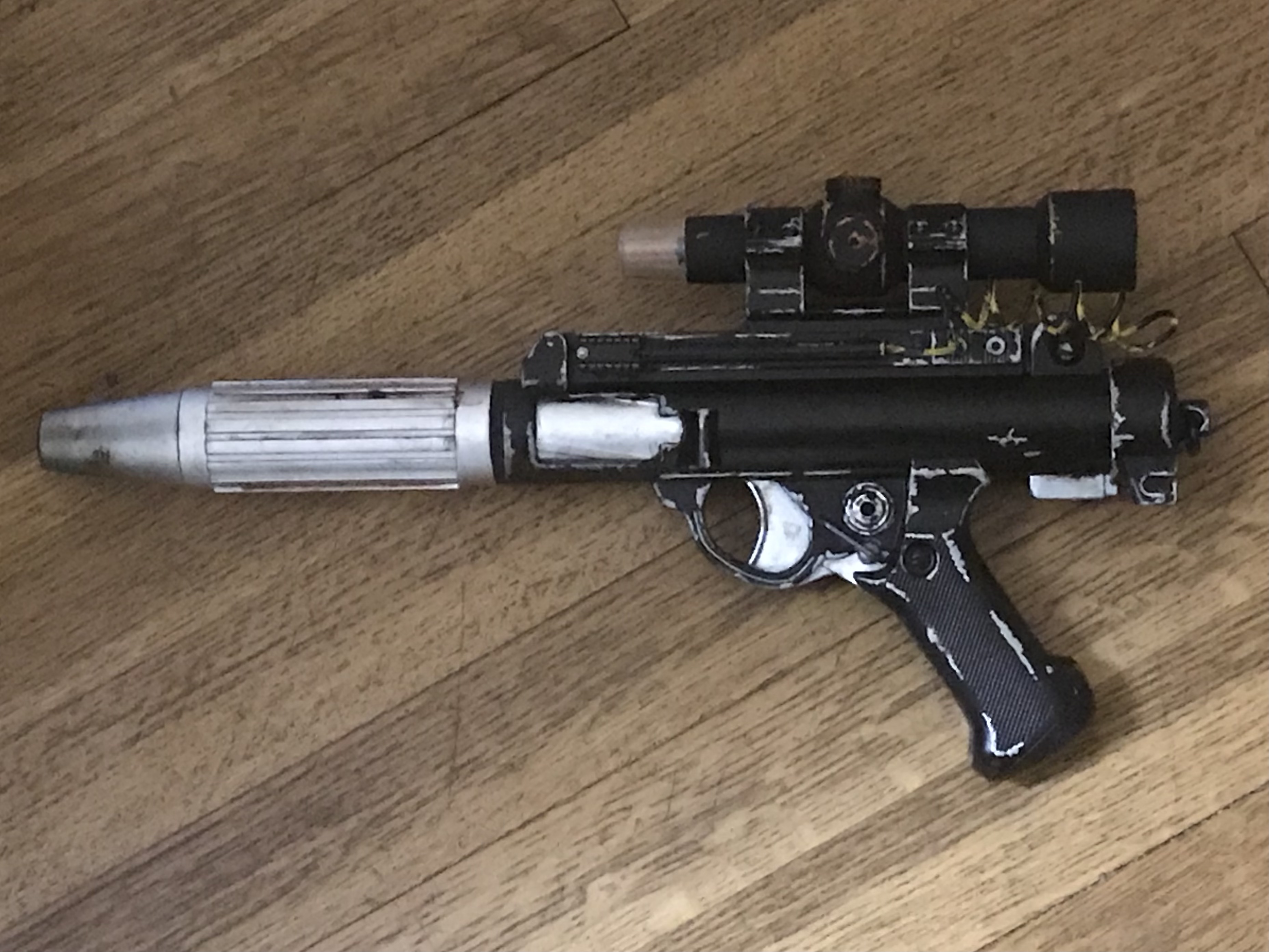 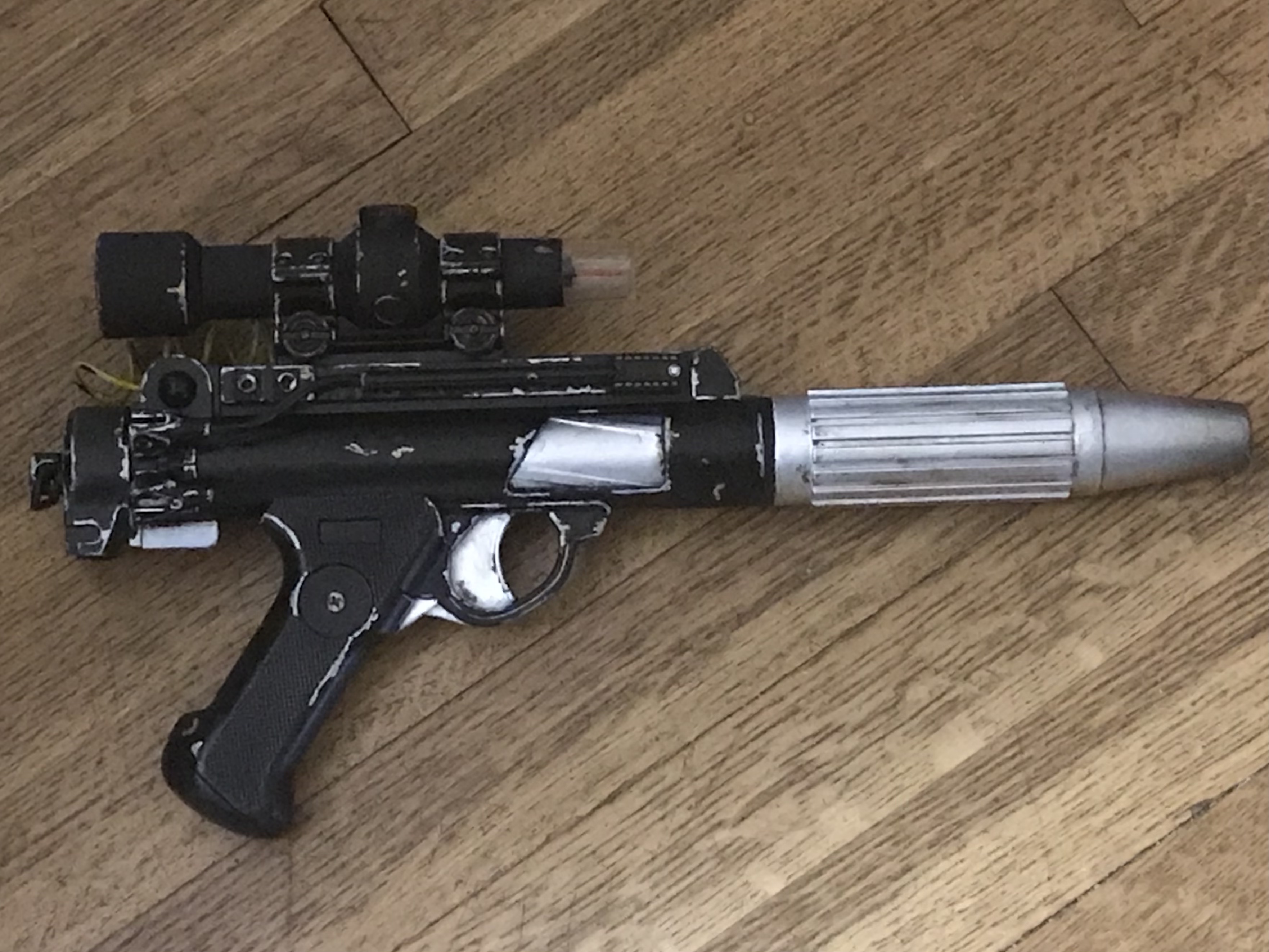 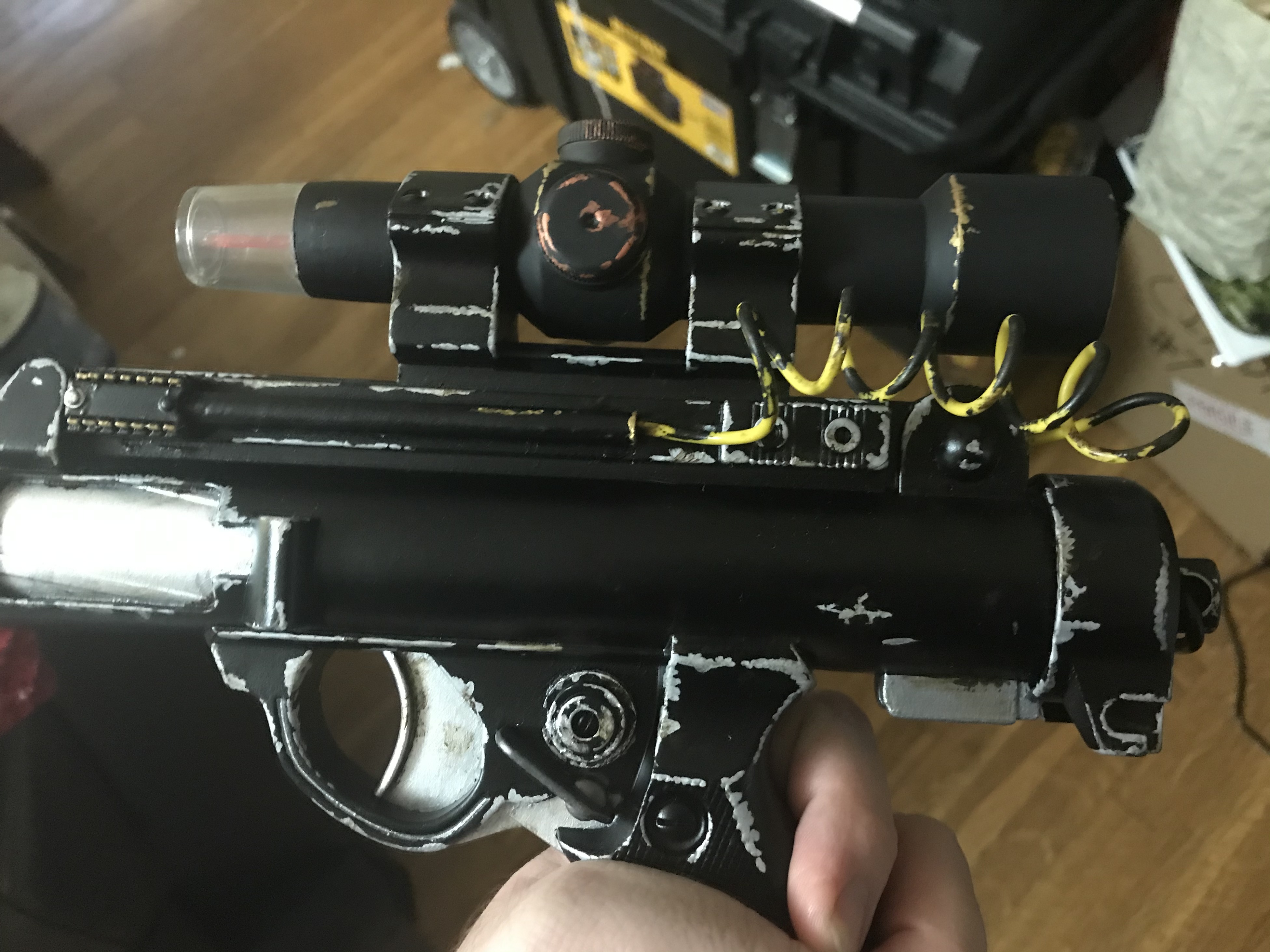 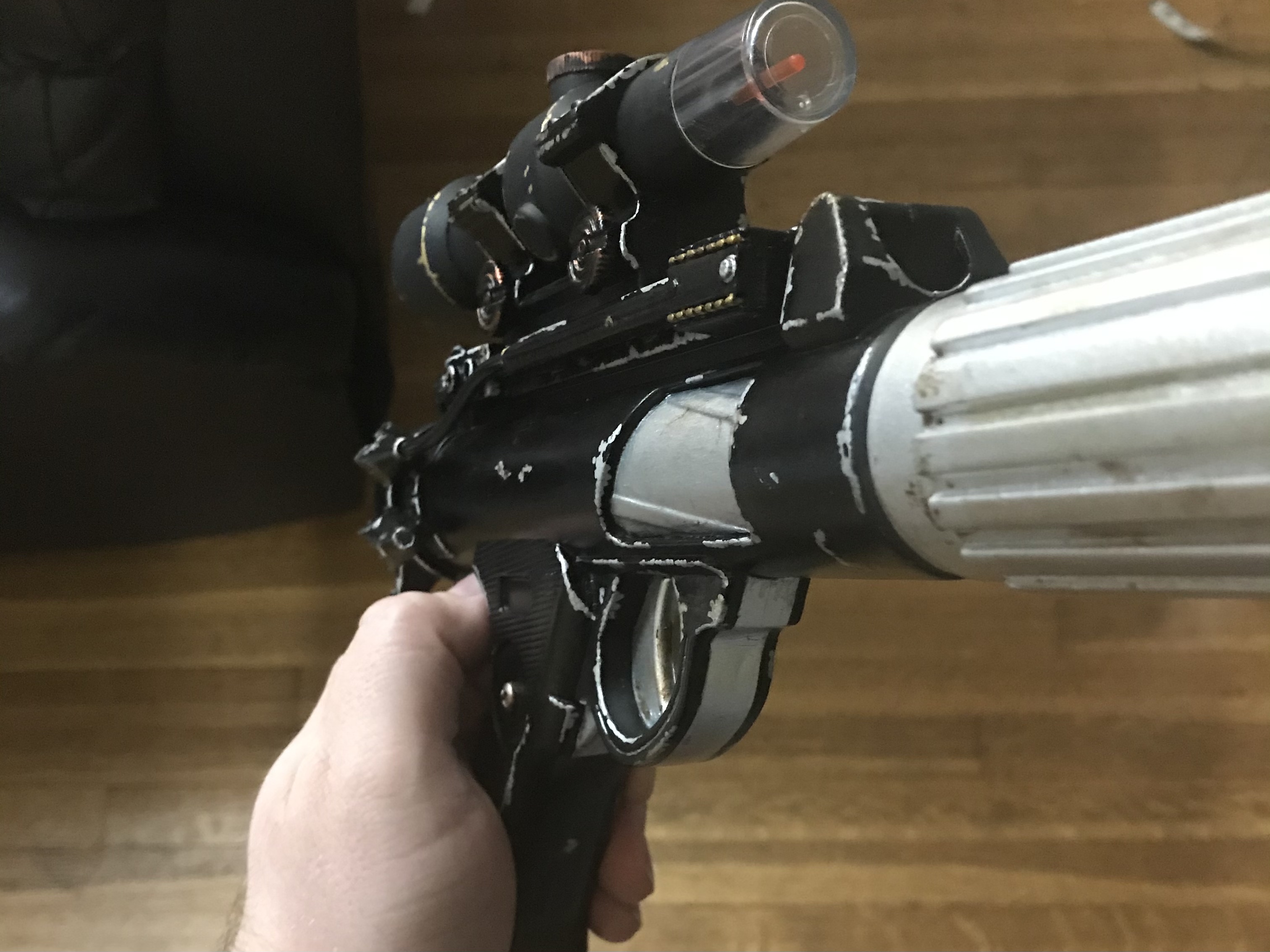 RPF PREMIUM MEMBER
Nice work! Cutting out that scope rail with a Dremel is not something I've decided to try yet.
I've been doing something similar. I'm building a rack with 3 E-11 blasters in it for "set dressing" for our 501st booth at events, but I didn't want to use expensive/labor intensive blasters. I downloaded E-11 files from thingiverse, scaledv parts of them down (in some cases) to fit the Rubies, and printed them. It's working pretty well.
I also modeled a slip-on ring for the rear end of the scope, so it had a recessed area. 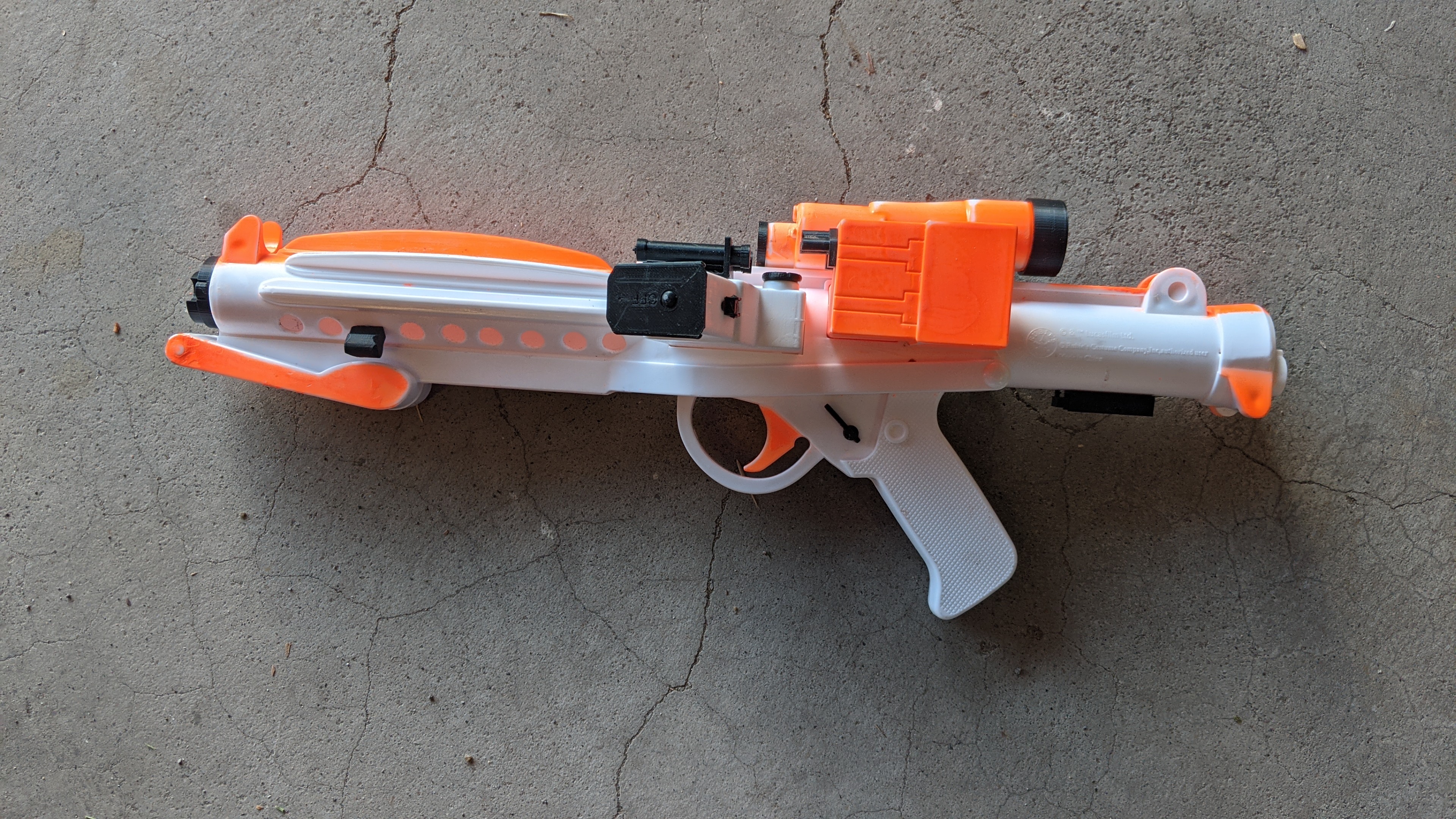 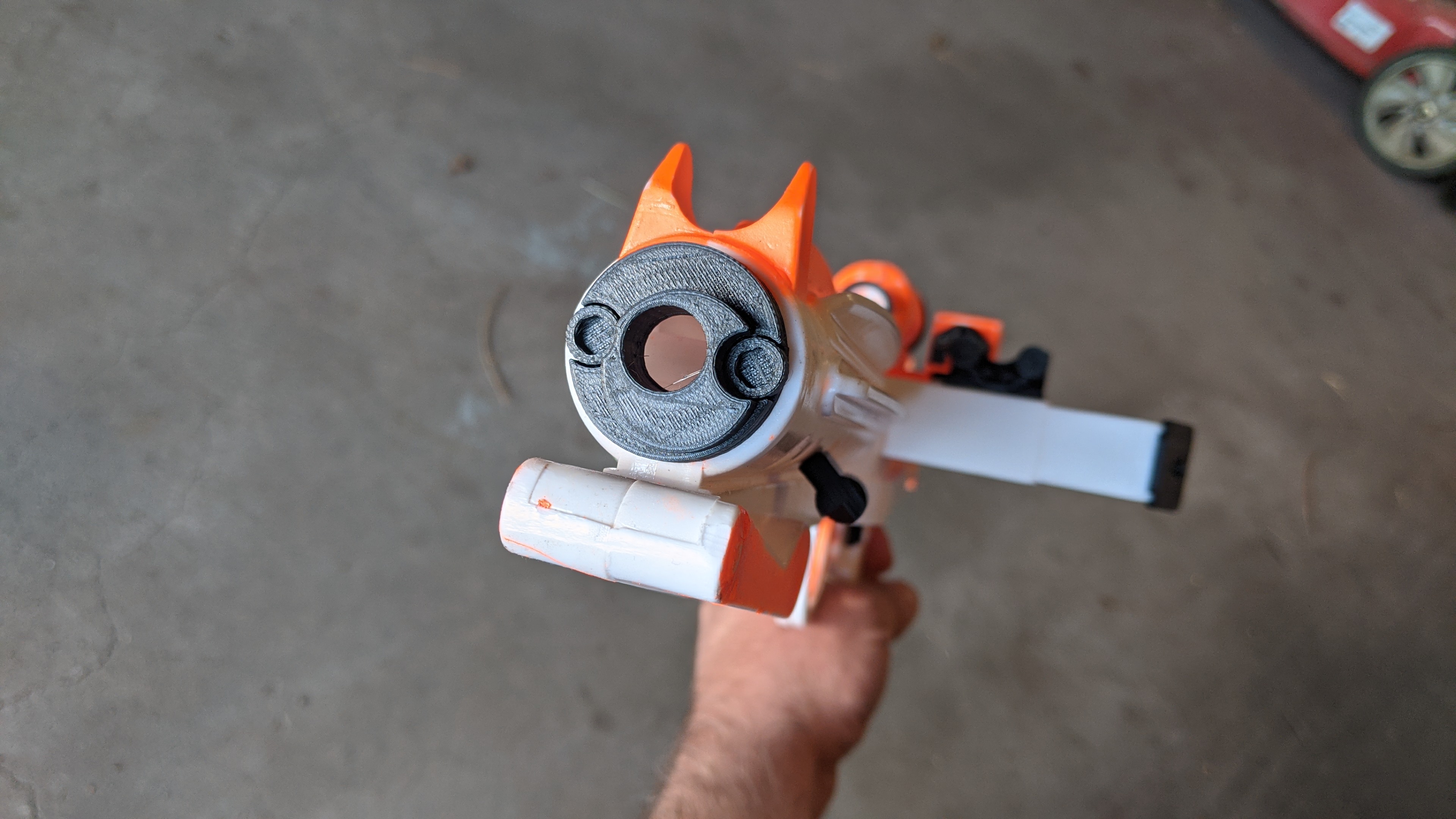 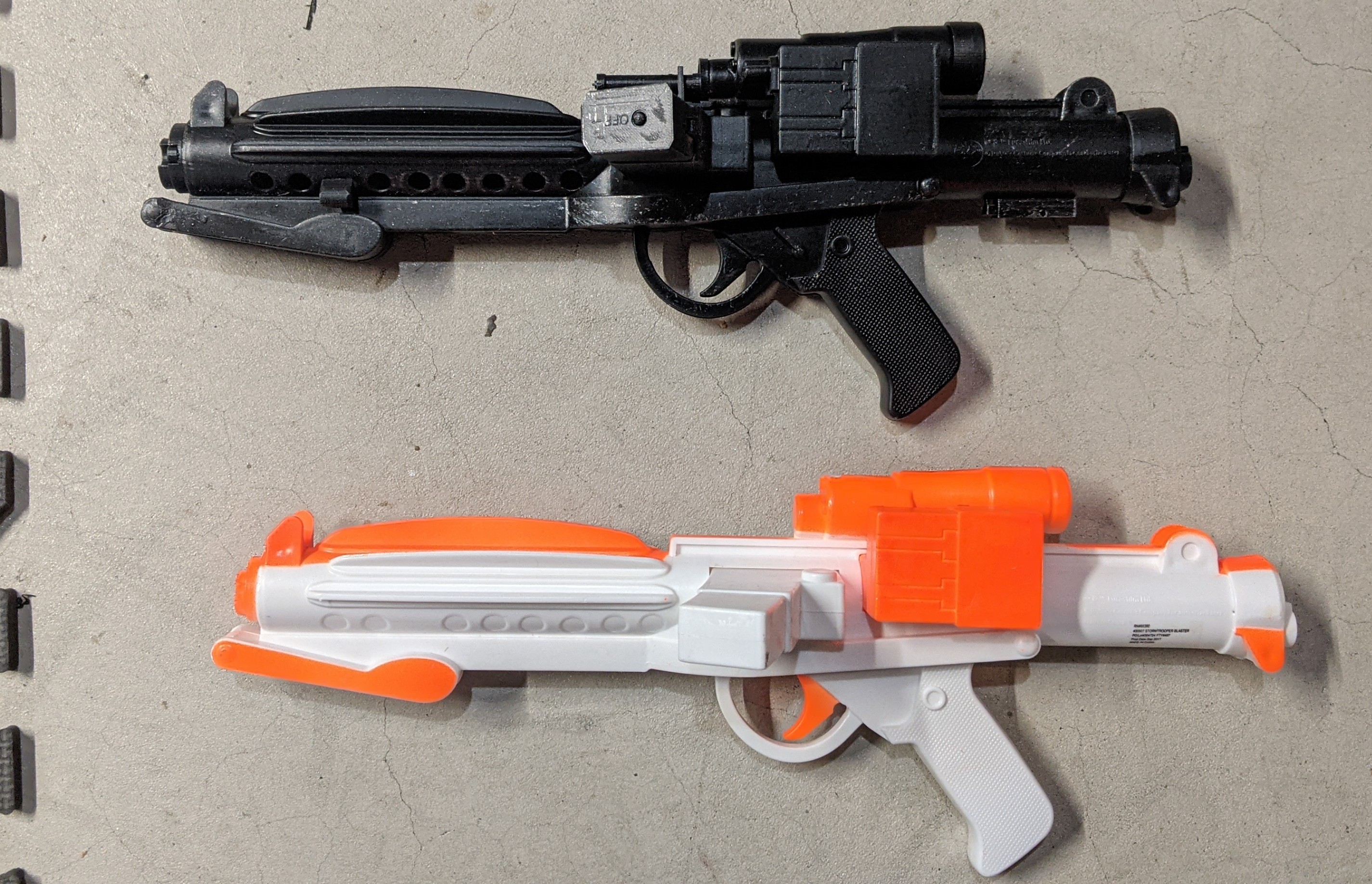 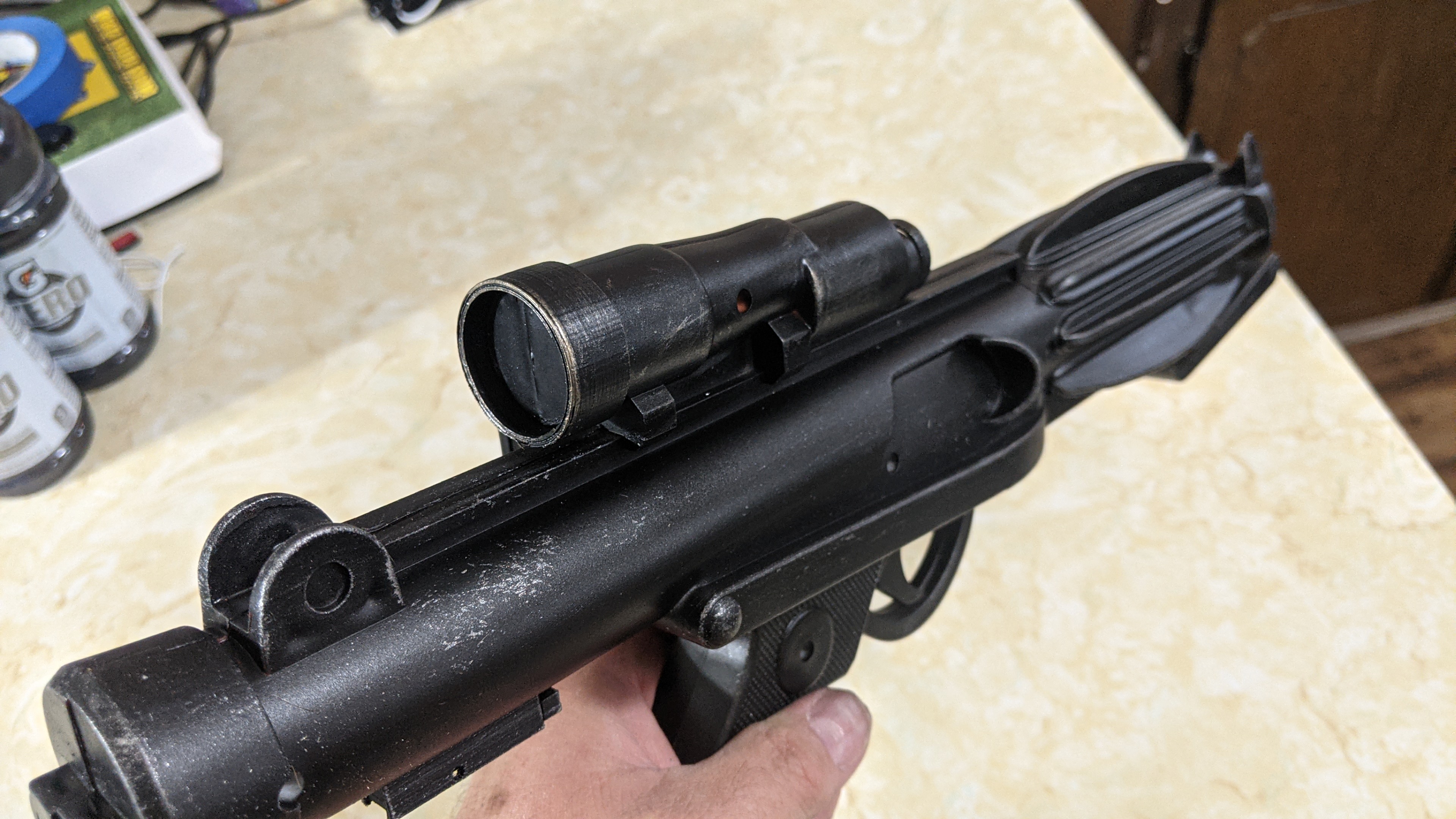 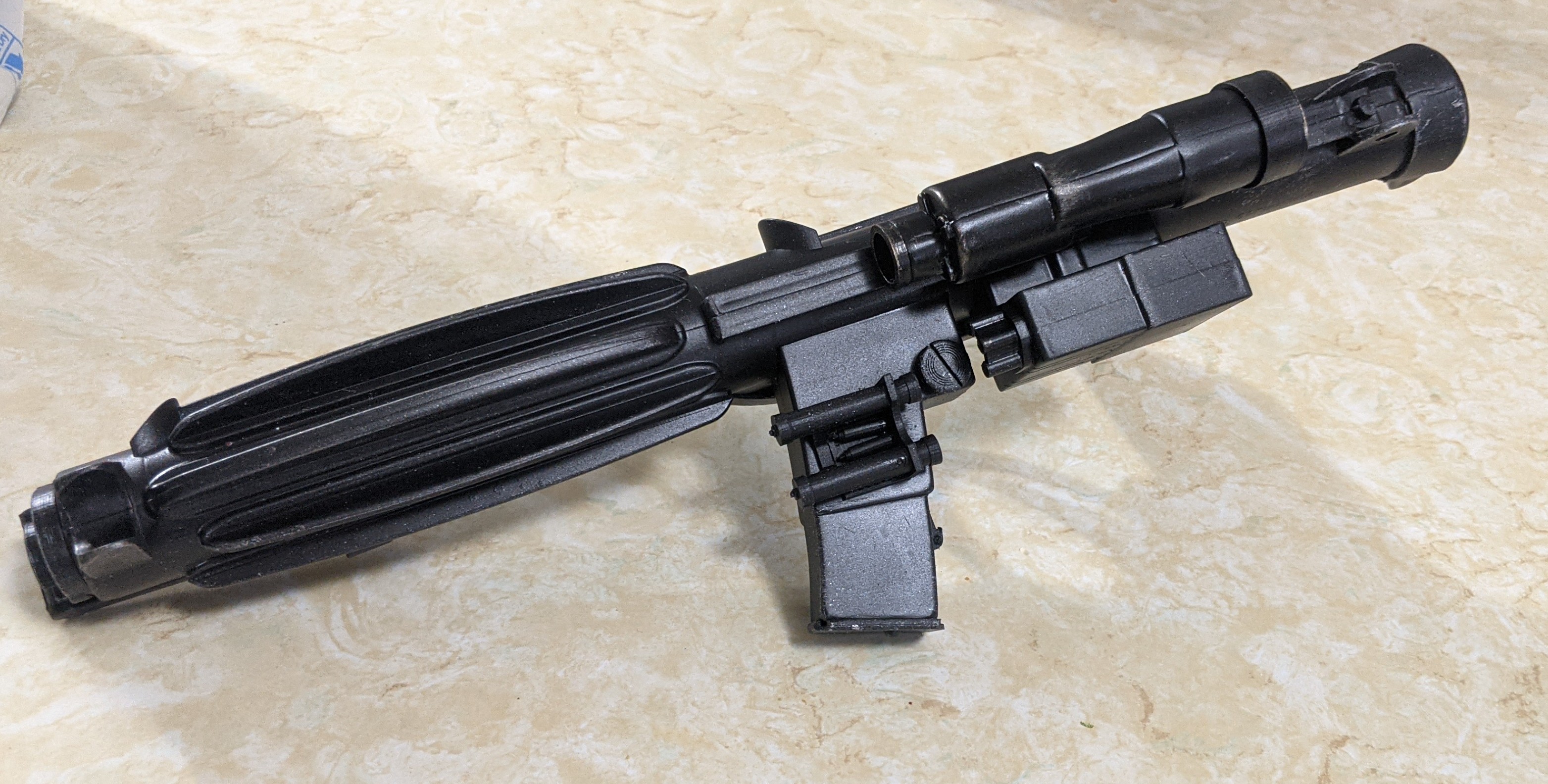 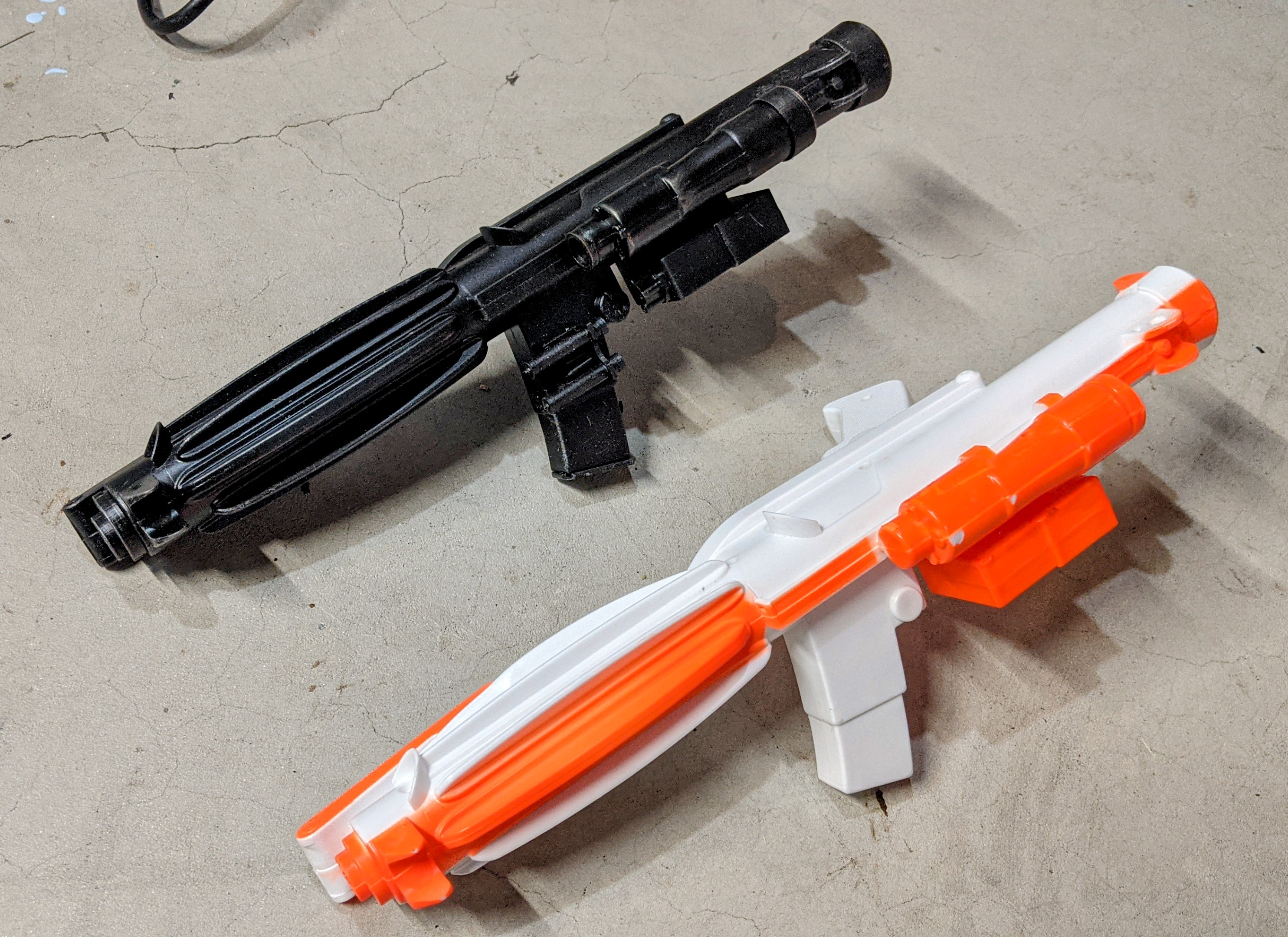 Finally finished one of the blasters. The other two are primed so I just need to start on the painting

For what the base was (a Rubies costume prop), I'm quite pleased on how it came out 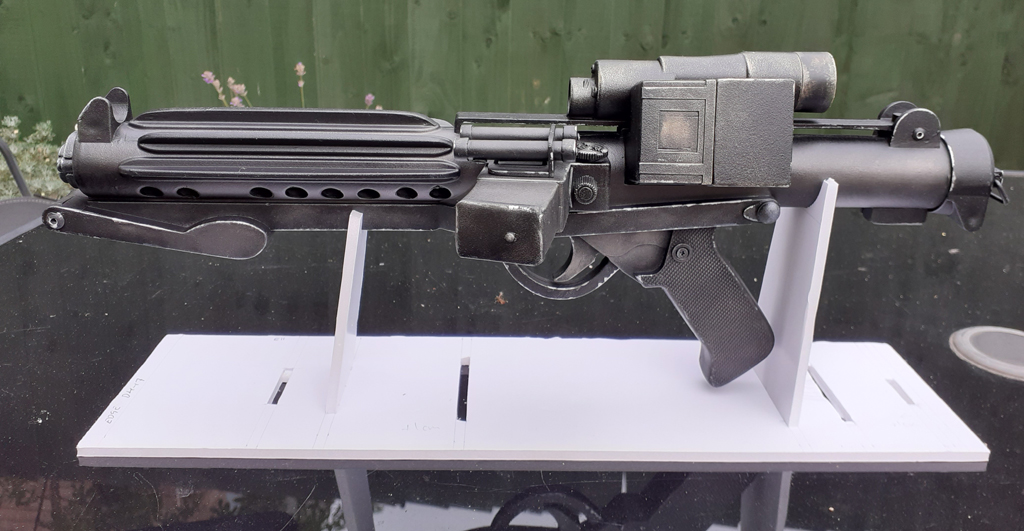 I also used a couple of paint techniques that I had not used before, which is always a plus.

After all the base work, adding all the extra bits (the screws, O-ring, reshaping the T-tracks, etc), I sprayed the base with Halfords rubber black. It gave a good texture, and was nicely matt, but would not dry properly. Even after a week it was still a little tacky. I used a technique I had not used before to enhance the gun metal look, which was to brush Cretacolour graphite powder over the main body. Not a thick coat, but in selected areas only.

Rather then masking off the metal "chamber", I glued over a piece of tin foil, dirtied down with boot polish. Finally a coat of clear sealant help keep the graphite powder in place as well as removing some of the tackiness remaining from the Halfords paint. 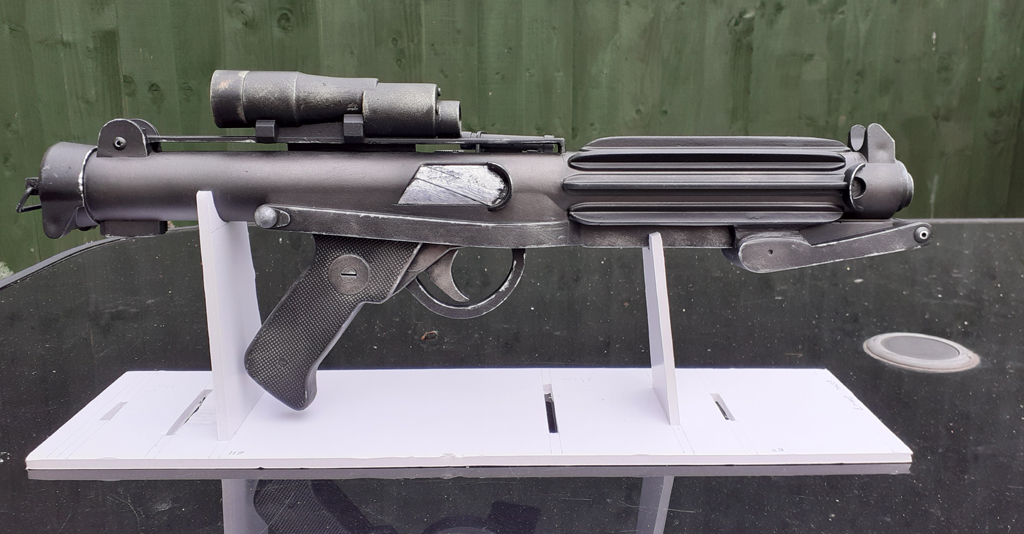 I couldn't find the right kind of O ring that I wanted, but since the rest of the model isn't 100% accurate, I was happy enough with it. 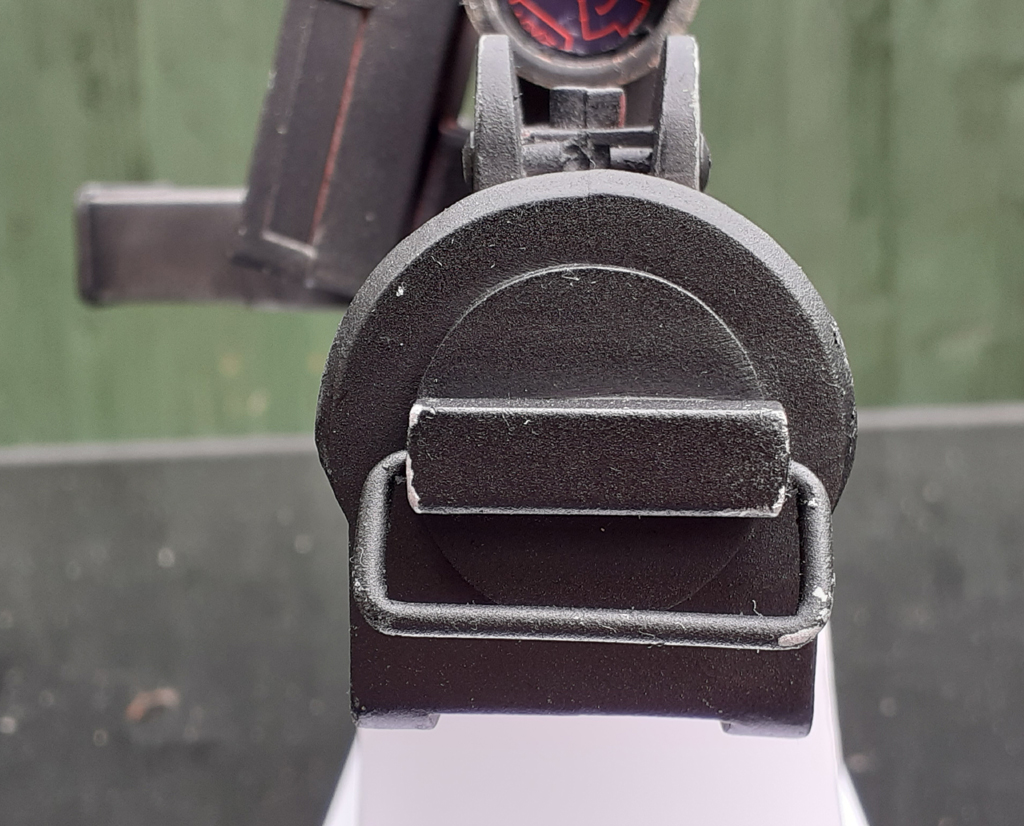 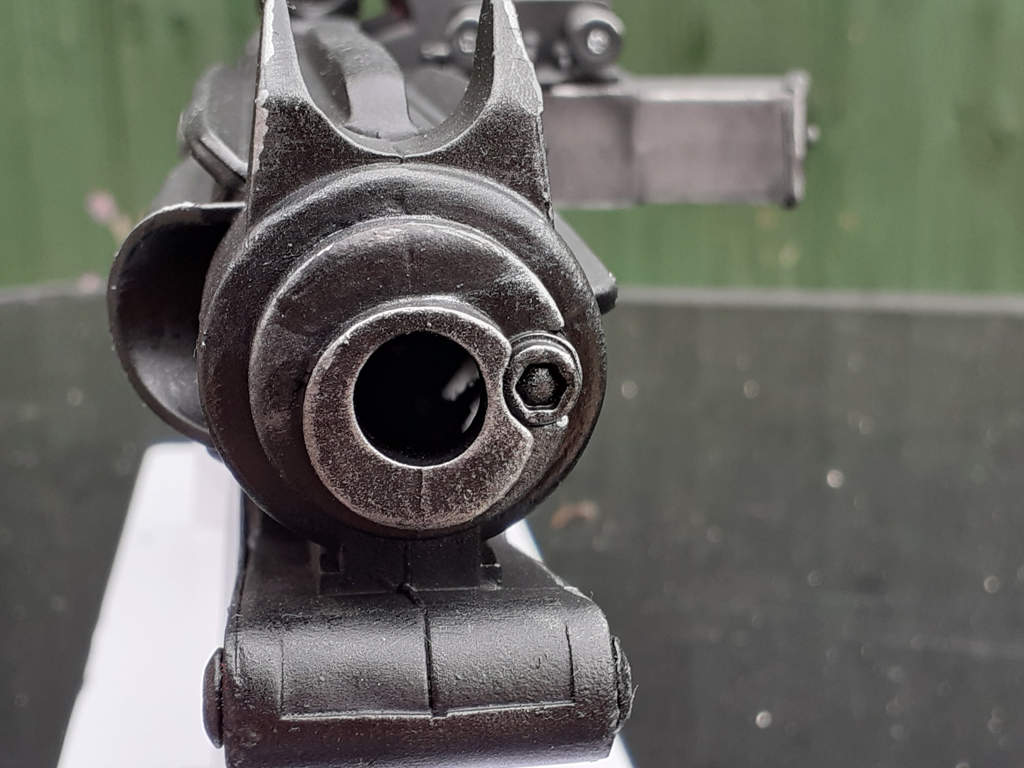 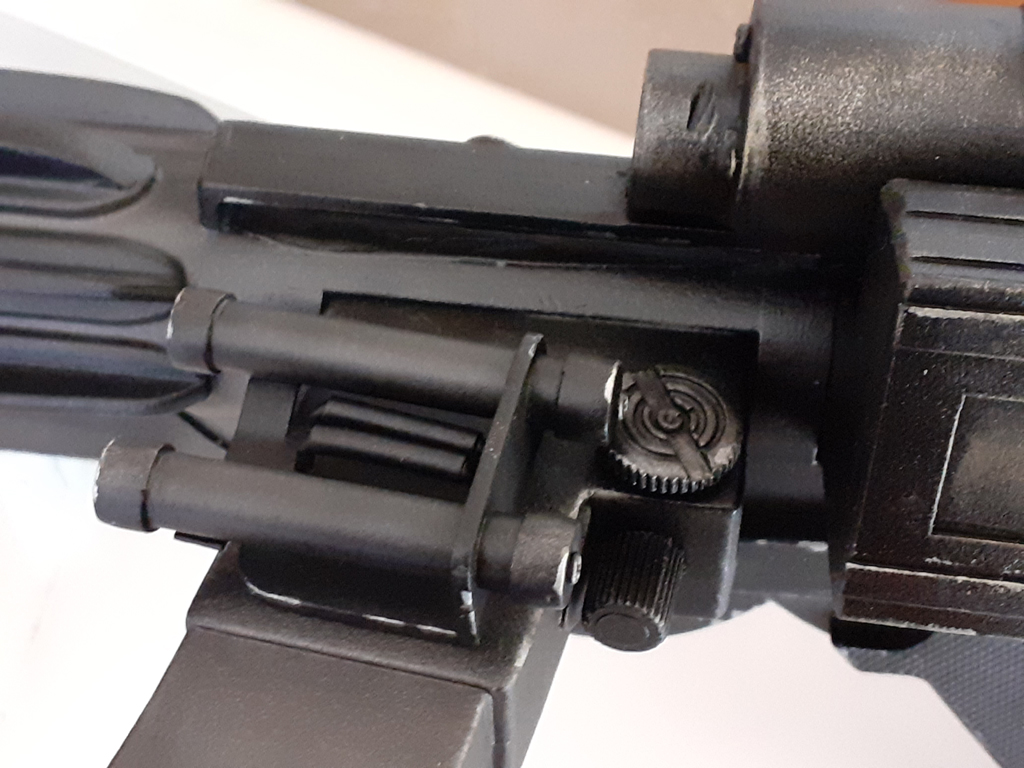 Test shot of the blaster in it's final place. The stand is a prototype one made from foam card before I get once custom cut from clear acrylic. I just need to learn how to design the pieces in SVG as apparently that is the file format that company want the files in.

Again, I'm happy enough using a Rubies blaster as a base build. The brief that I gave myself was that I was going to have at least three or more blasters on display in the hallway, that wouldn't cost a fortune to do. 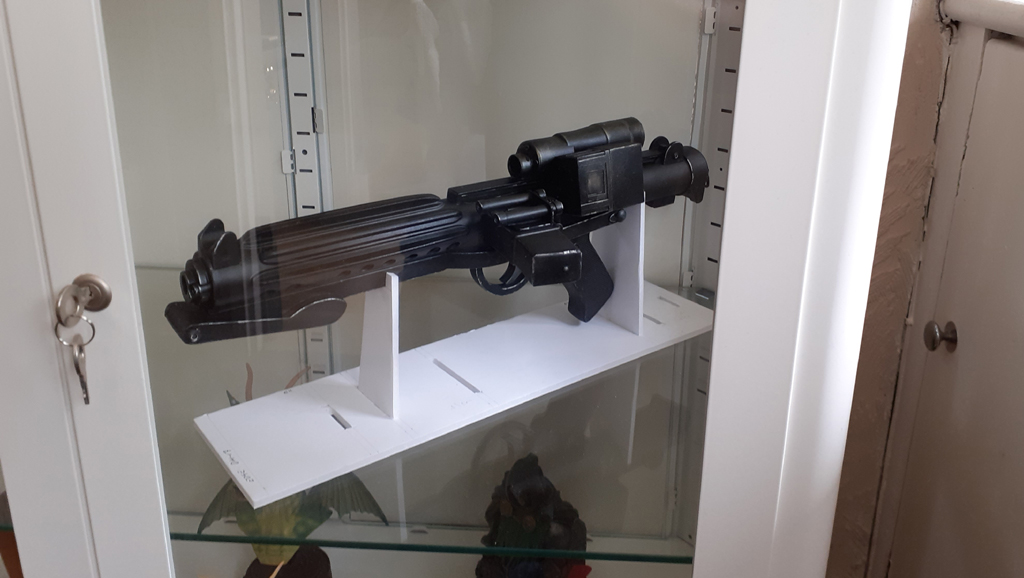 The Ultimate Guide to Lightsabers eBook
46 47 48