Hey Sofaking, I didn't get a chance to, but if you go back far enough, it's somewhere on this thread.


A little change of pace recently, I've made my dome lights more accurate. I used a lot of the great information in this thread and now I'm much happier with the result. I tried out a number of different arrangements of the interior ridges of the lens, and I think that Example C gets the closest.

The pencil you see was dimensioned from measurements taken off a Dixon Ticonderoga, accurate to a 100th of an inch (which is to say, it's not just a randomly sized pencil for scale. )

The dome lights are, in my opinion, 2" in diameter.

This is based on the measurements of the vac-formed panels in the Tantive set, which I've estimated (through photogrammetry) to be about 8.5" by 17". This is relavent to the dome light measurements because there are dome lights positioned on top of some of the panels on that set. 2" makes them fit perfectly.

This is not the final word by any stretch, but it gets pretty close I think. 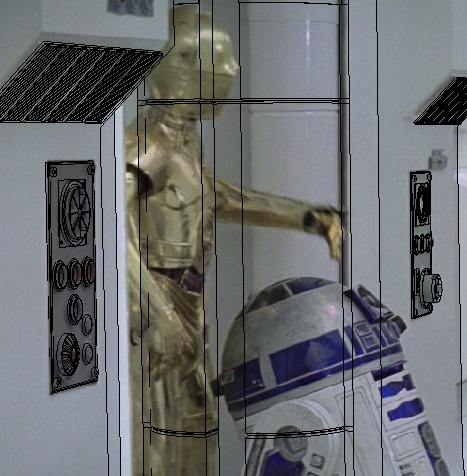 Wavey said:
Cor that comp shot is darn good! That's my daily MF fix all in one pic.

I was looking back at the idea Steve had of the ANH MF overhead box levers being used else where and the comparison with the Tractor Beam controls. The white stripe on the TB handles goes off centre, which got me thinking that the handle was possibly part of a screw-top type thing, with the white stripe painted inside a thread groove. Can see on the TB handle that the part was more completely circular.

I think they may well be the overhead box handles, just looking for a pic to compare it with.
Click to expand...

Hey Wavey,
Very interesting theory! I look forward to more info on this. I have yet to try modeling the deathstar handles to see if they seem to work for the overhead boxes, but this is making me want to do it soon all the more.

I thought you had found hardware source on them lenses for a moment, I nearly wept for joy!

Wavey said:
I thought you had found hardware source on them lenses for a moment, I nearly wept for joy!
Click to expand...

We're planning a 3D print and then making molds!

Superb! It don't get better than that!!

It will be if I know what the heck I'm doing! lol
D

I am a big 1/6th fan and I am waiting until I can see the pics of this!! Right now I am too new to see anything! This is an incredible site!

dewback matt said:
I am a big 1/6th fan and I am waiting until I can see the pics of this!! Right now I am too new to see anything! This is an incredible site!
Click to expand...

Welcome to the forum! You're gonna LOVE what Starkiller and I are working on for our next big project!

a bit of a "now for something completely different" while I've been busy with some projects....

a while back I realized that the Falcon was basically just a flying saucer with some serious stylistic modifications. Like the Enterprise before it, the ship transcends a basic Forbidden Planet style craft in some ingenious ways, but it got me thinking. What if Star Wars wasn't Lucas's interpretation of old TV action serials, but was instead a direct adaption of a hypothetical 1950s show featuring a farmboy, a space cowboy, and a old samurai flying through the cosmos in a "hamburger and olive" flying saucer?

well, I've answered part of the question of what that might look like with a little model. see it here

I promise I'll get back to the regularly scheduled "Re: Screen Accurate Millennium Falcon Cockpit (CG Model)" soon, but I hoped to keep you guys going with this little tidbit.

Ha! That is fantastic! Just needs to be dangling from a string with a sparkler sticking out the back.

maruska said:
Ha! That is fantastic! Just needs to be dangling from a string with a sparkler sticking out the back.
Click to expand...

These pics are awesome.
I'm going to use them to help with my 48th scale kit cockpit and ramp.

In its inspirational form, it really reminds me of a 50's diner designed by Curtiss-Wright or Arthur Radebaugh. Cool idea.
Last edited: Mar 16, 2013

I wrote some about my process on the blog here.

I actually made the composite from scratch, using all the original elements.

Ah damn it. i wish you could re render it in higher resolution. I will use and the angle matches perfectly. I know you took measurements but isnt the falcon looks a bit smaller?
Great mood and colors. i love the shadowless environment and indeed like maruska said i t looks like painting.

McQuarrie would be proud...

McQuarrie might raise an eyebrow that I didn't actually paint it myself (heh, at least, judging from the kind of critiques I've experienced from professional painters I've known.) But hey, I am not unflattered by the comparison. Thank guys!

Wish it could be higher resolution, but in this case, I was limited by the resolution of the layered effects elements.

I hope in the near future you will be able to do it. This render cant wait to be done a matte painting

Hey there!
When next you make some renders, I was wondering if you could do one the engine room... that is, if you have made an interior for that part of Falcon
You must log in or register to reply here.
Share:
Facebook Twitter Reddit Pinterest Tumblr WhatsApp Email Link
Top