This build is pretty much finished now, but I thought I'd document this costume as I've not written a forum post in quite some time. I think this is the first htread I've started in the predator section of therpf too.

I attempted a Predator build many moons ago (probably 15 years ago), before I even got into costuming as a hobby but always wanted to re-visit it at some point now i have some new tools and skills. A friend of mine started a "Lockdown Project" and was able to put together a very good looking Predator costume, buying parts and putting together some AVP style armour from EVA foam. After seeing his build, I thought I'd give it a go myself.

My favourite style of Predator has always been the Guardian (or Gort) from the Lost Tribe at the end of Predator 2. 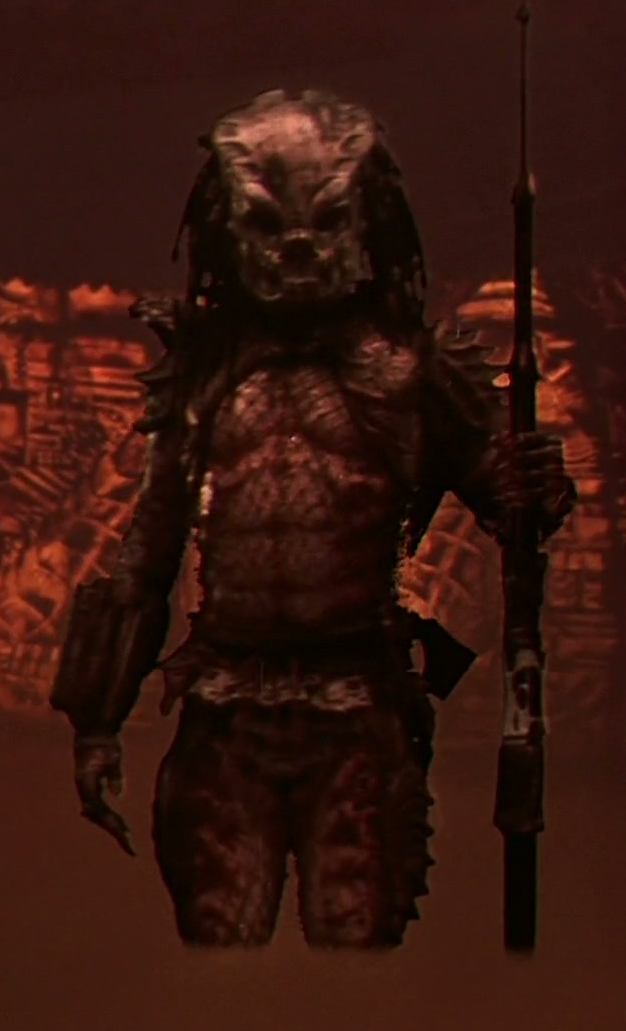 Essentially the costumes armour pieces are the same as Predator 2's City Hunter, but I could not find the Bio helmet anywhere. Eventually I did find a version online, and although the main shape was there, the details were lacking (I think perhaps it was a scan of a toy that had been smoothed or something?).
So, I decided I'd try my hand at modelling my own Bio mask. It took some time, and it is by no means Screen Accurate, but the details were there to make it at least resemble the original design (at least I think so). I printed a version of the mask, and used it for some photos before going back and re-modelling some of the overall shape (the Mk1 version was heavy, wide and the top curve made it sit very high on my head), 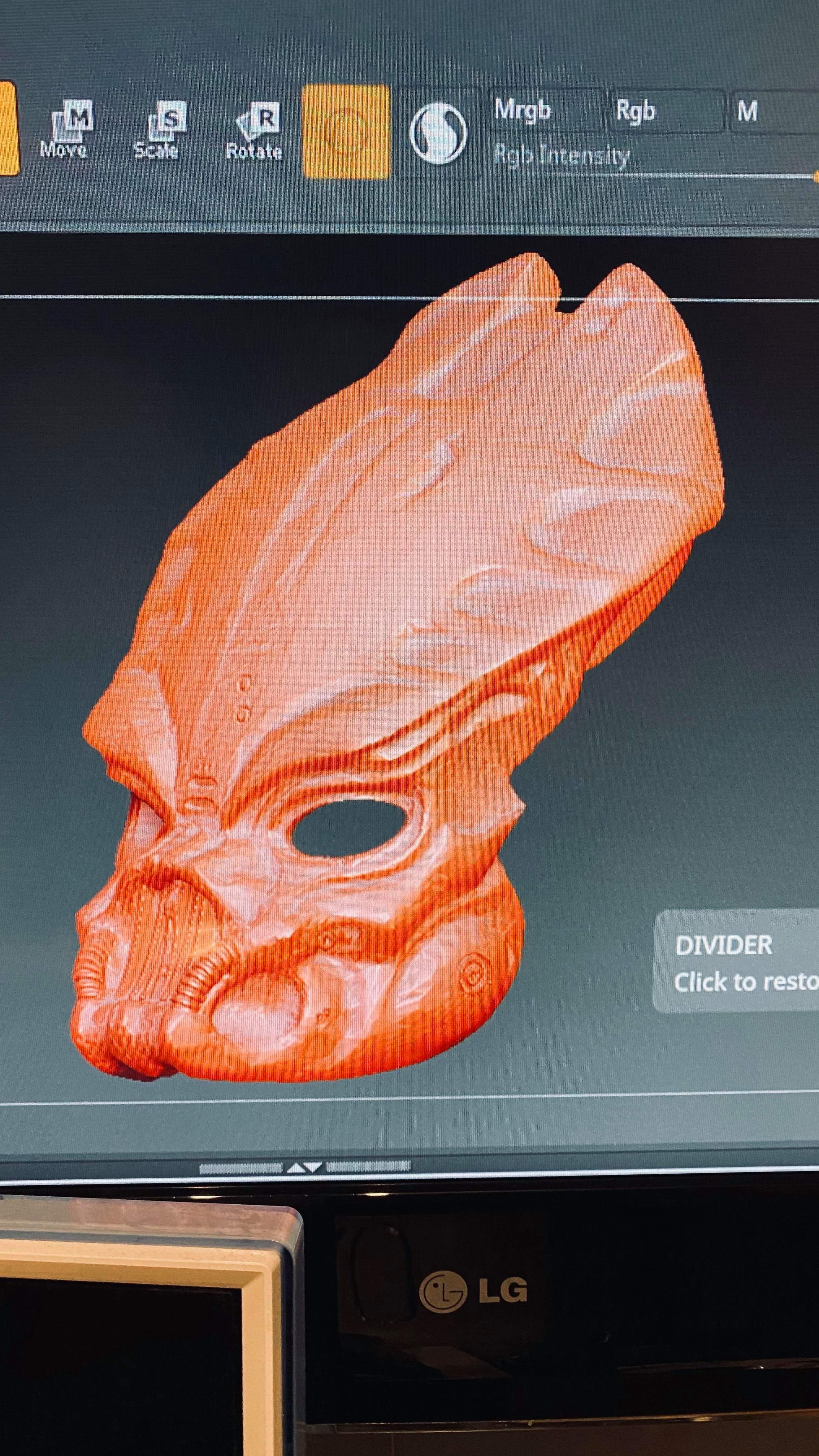 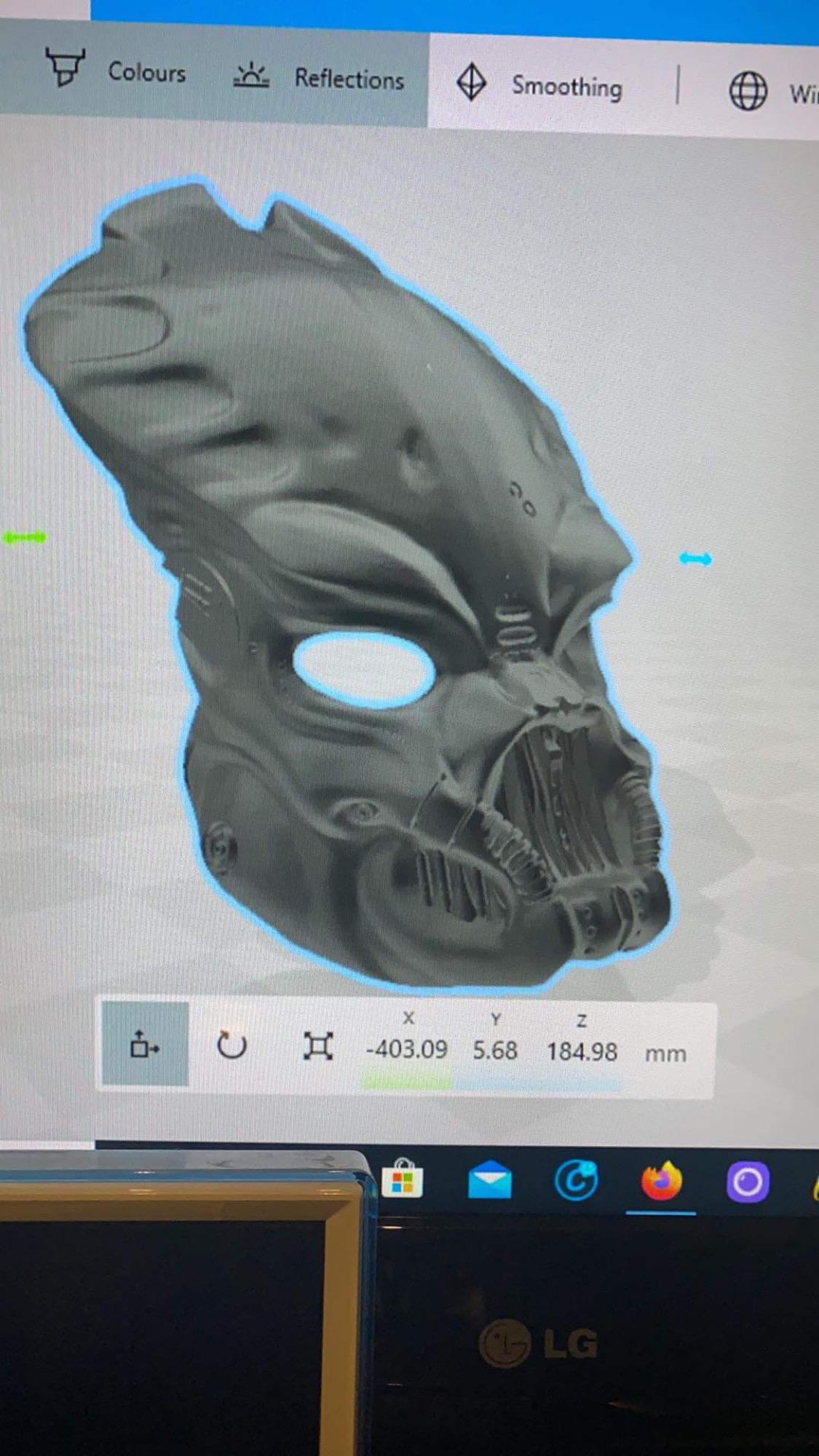 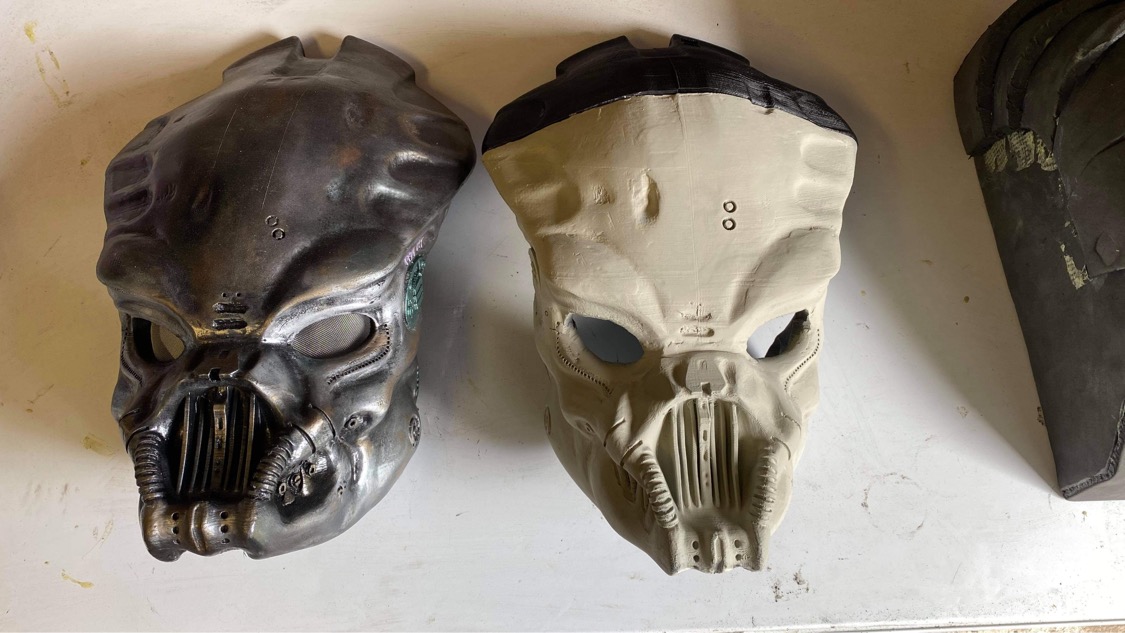 While parts of the Bio were printed I made a start on some other pieces. I ordered a printed morph suit /Zentai suit and started working on things like the dreads (backer rod, rolled and shaped with heat then dipped in black latex for 5 layers). 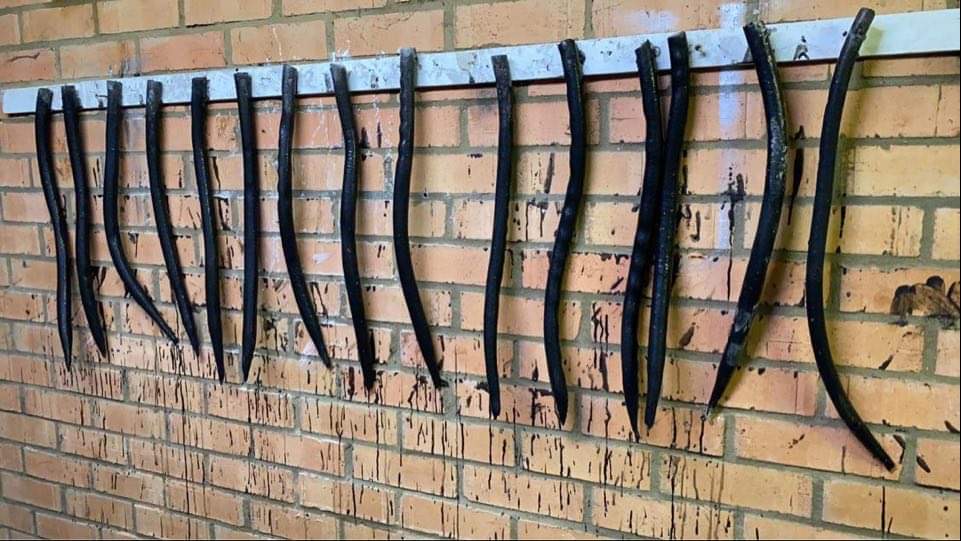 Hands were made from some cotton gloves, coated in layers of latex and painted. 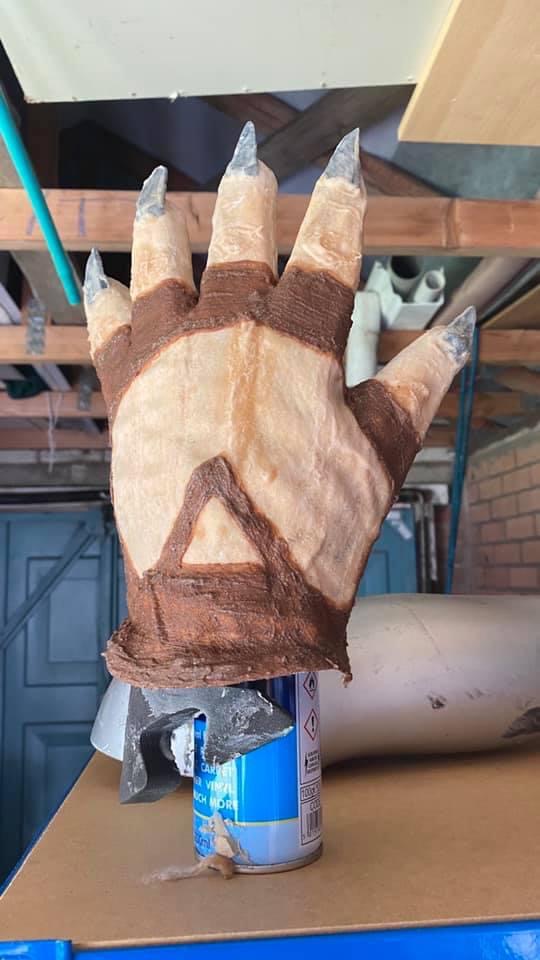 Feet were made from some old trainers, with EVA foam shapes added and again coated in layers of latex, cotton wool and tissue paper. 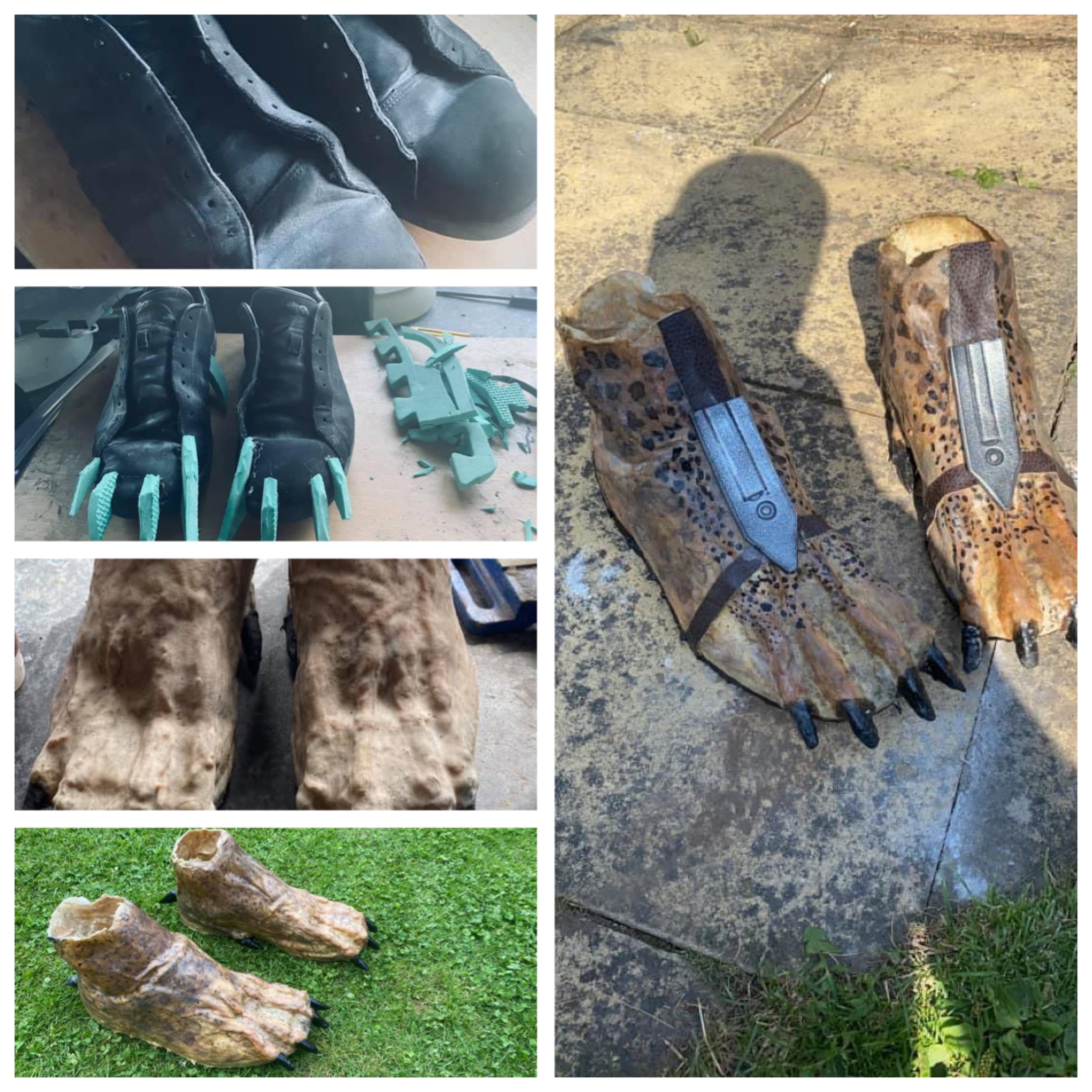 The Head (under mask) was made from some EVA foam, again coated in layers of latex before adding the dreadlocks to it. 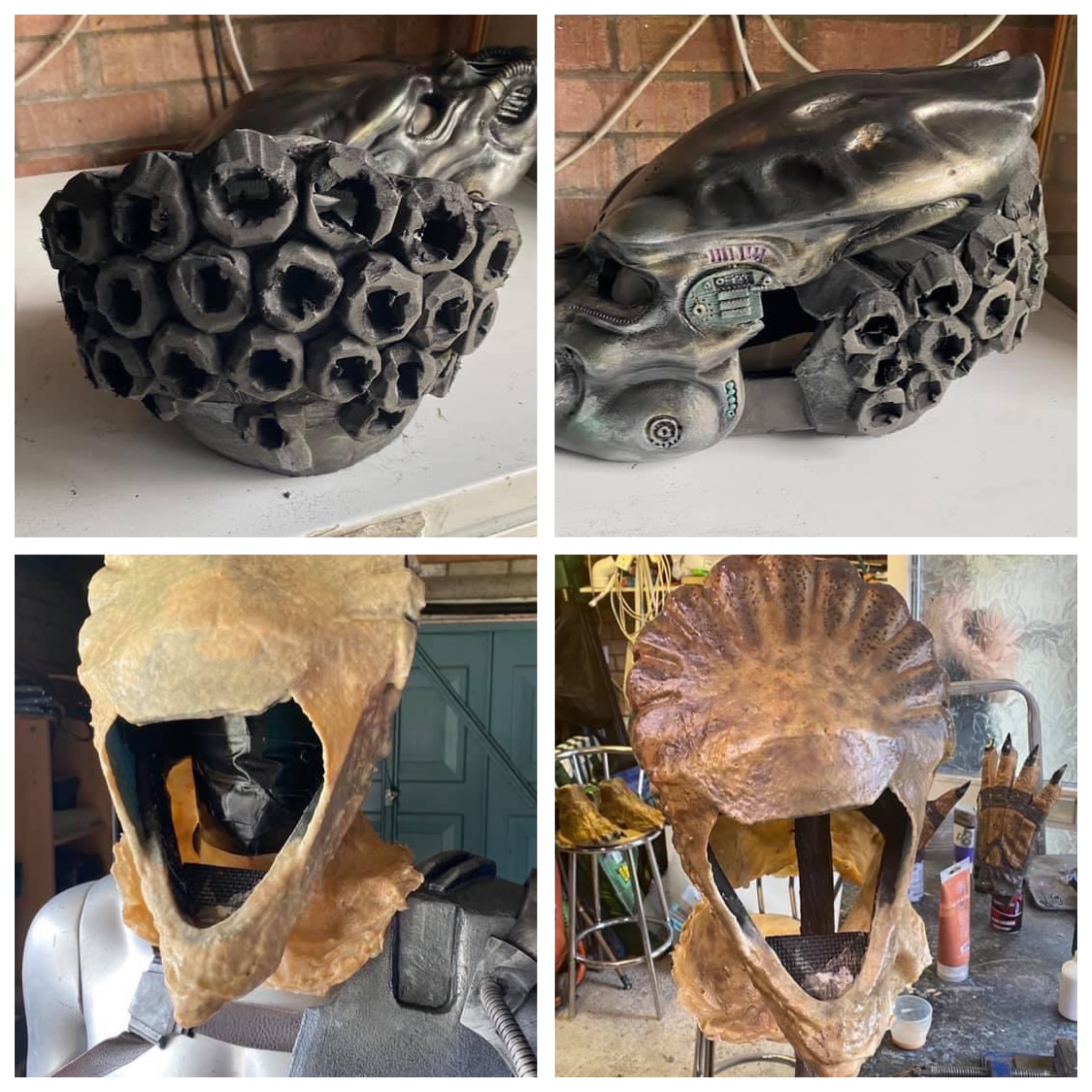 Initally, while looking for files, I cam across a thread here by MoeSizzlac: My P1 Themed Predator Costume with Electronics and Sounds. (Pic Heavy)

And as he had created some great P1 files, I decided to go with a Gort Jungle Hunter build and combined with some EVA parts I had built the first incarnation of my new predator: 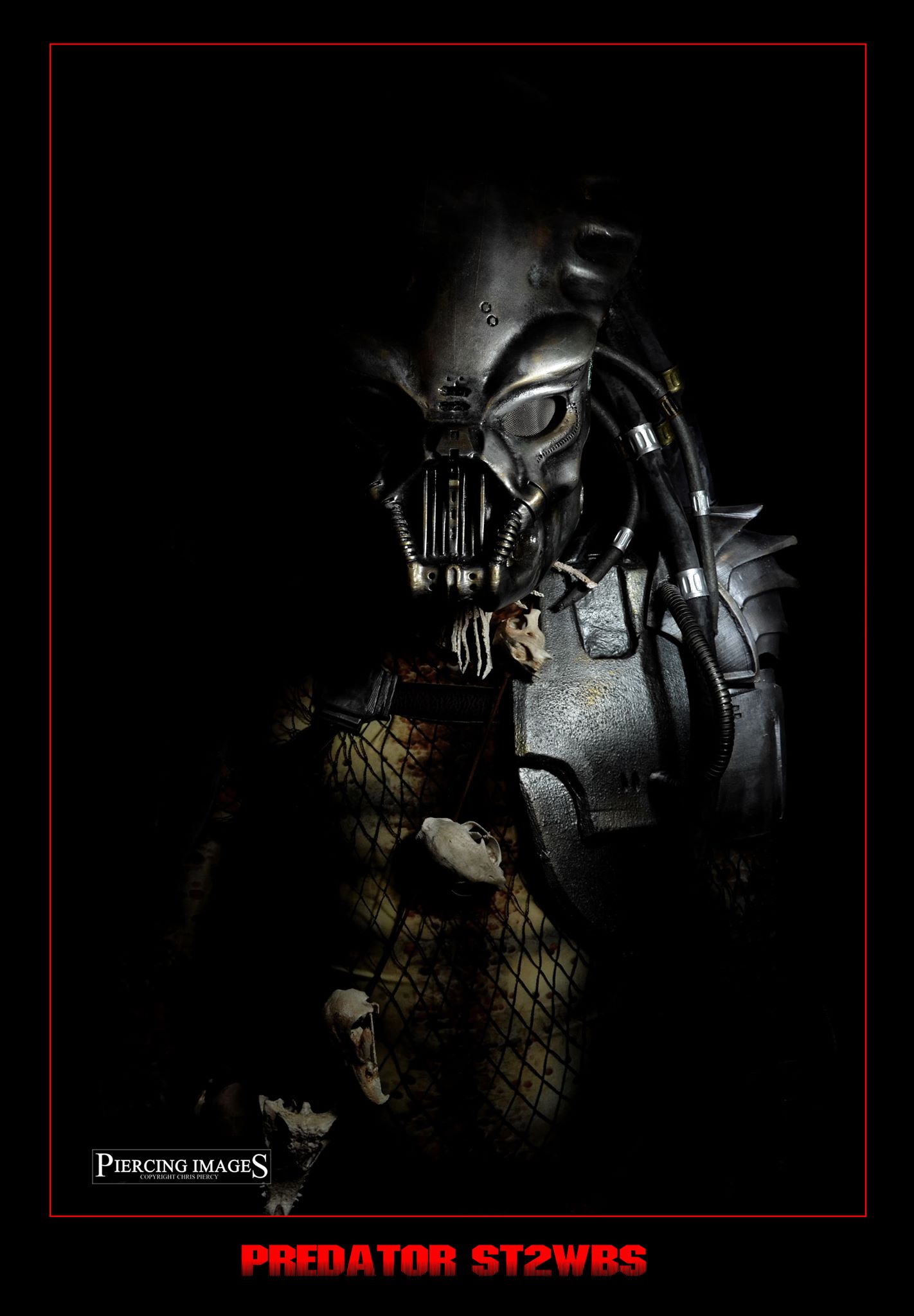 However, this was not what I had originally planned as as such I was not happy with how it turned out.... I just needed to build that Guardian as I orginally intended.

So, I purchased the P2 armour files from cgtrade by a 3D artist "jarid88". 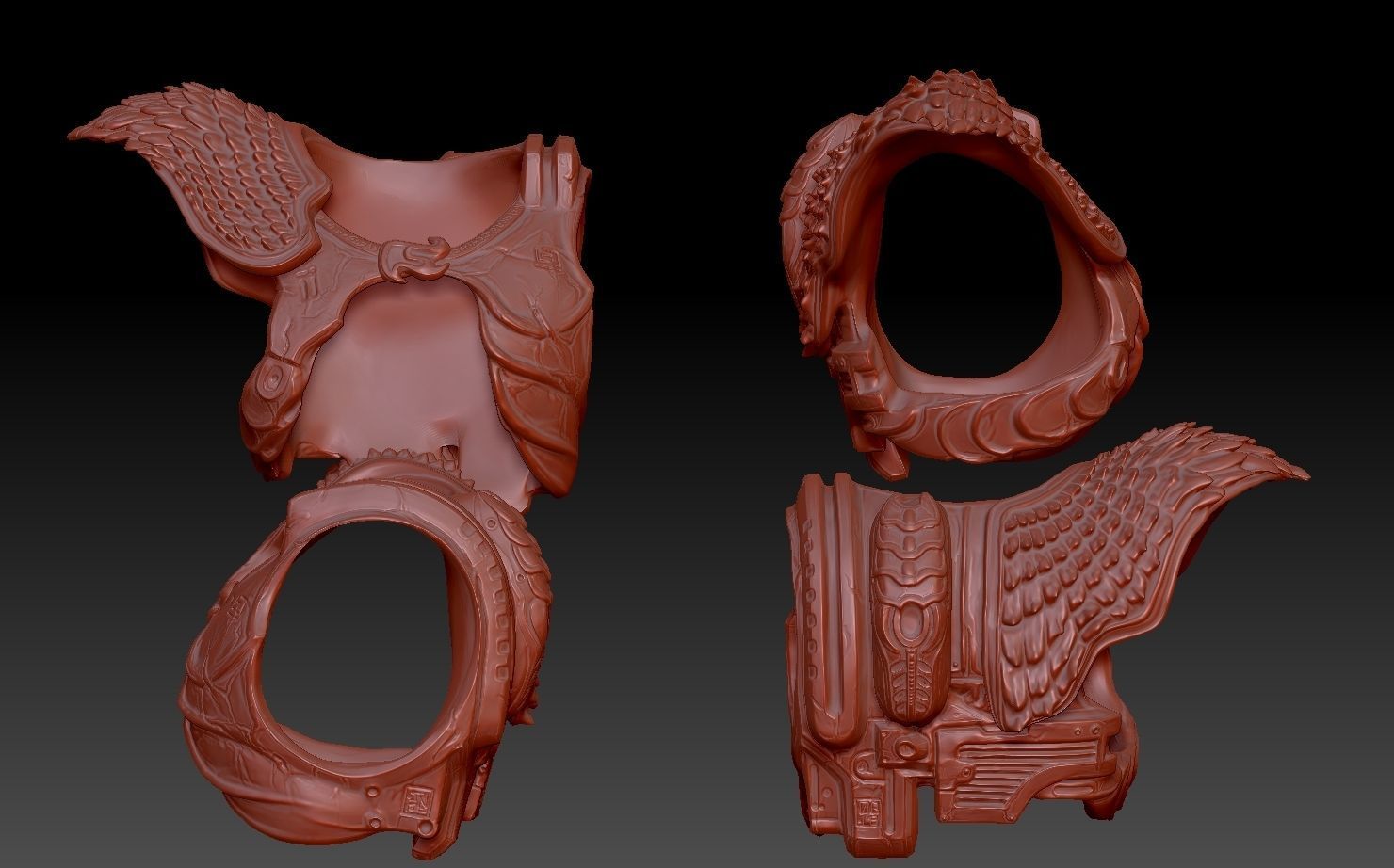 As always with 3D printing, issues arose from the print time, the size of the prints had to be scaled and sliced to fit on my print bed, and also some thought into how I was going to actually wear these pieces, how they would fasten together etc.

But eventually parts were printed and things started to take shape: 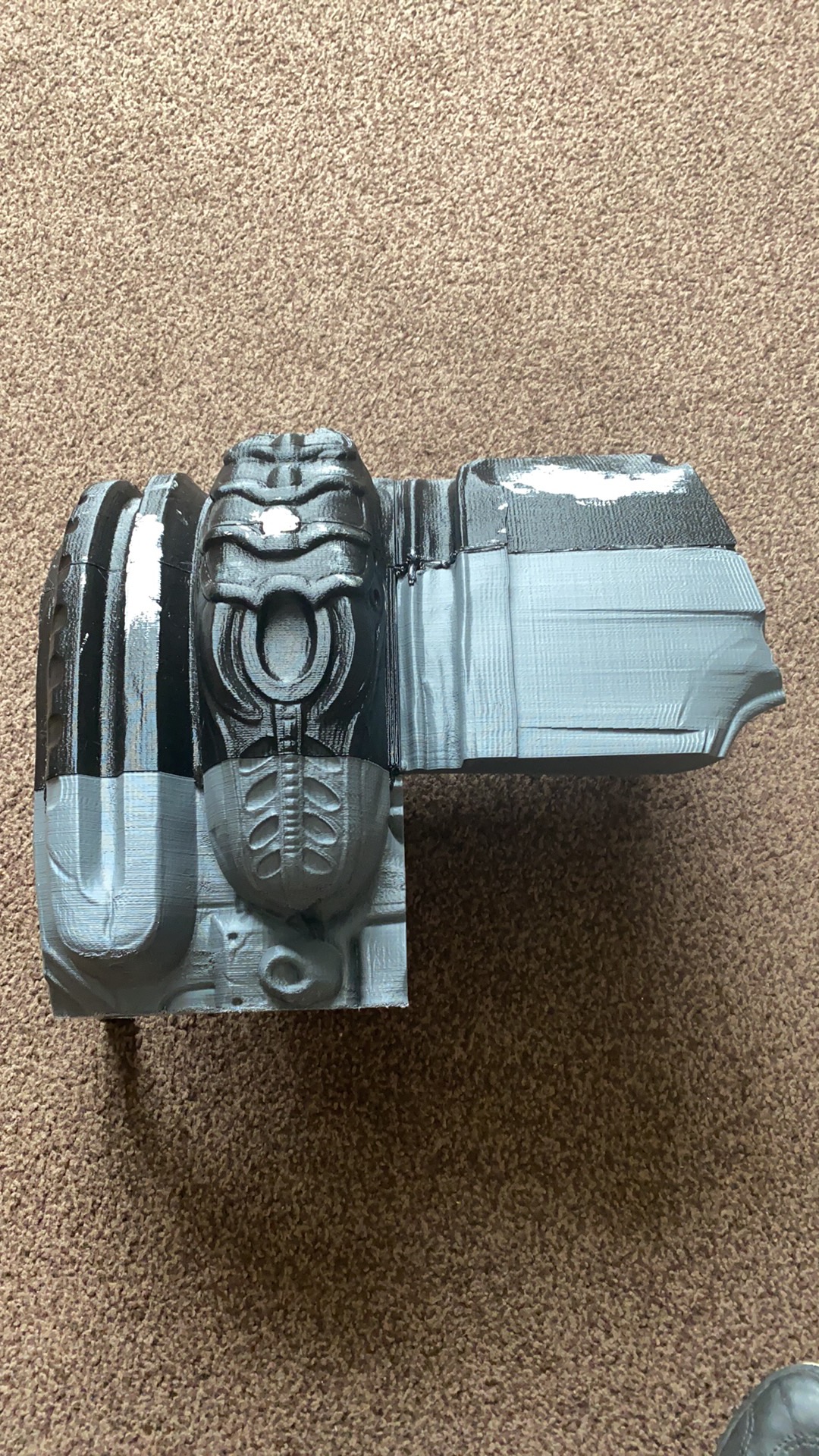 I painted some additional spots onto the Lycra skin suit to give a bit of texture, which got a bit messy tbh, but almost worked. Some mesh/netting was bought from ebay and a mesh top and trousers were made to go over the sking suit and under the armour, I used a mesh of 30mm but with hind sight I think I should have tried to find mesh with 40mm squares instead. 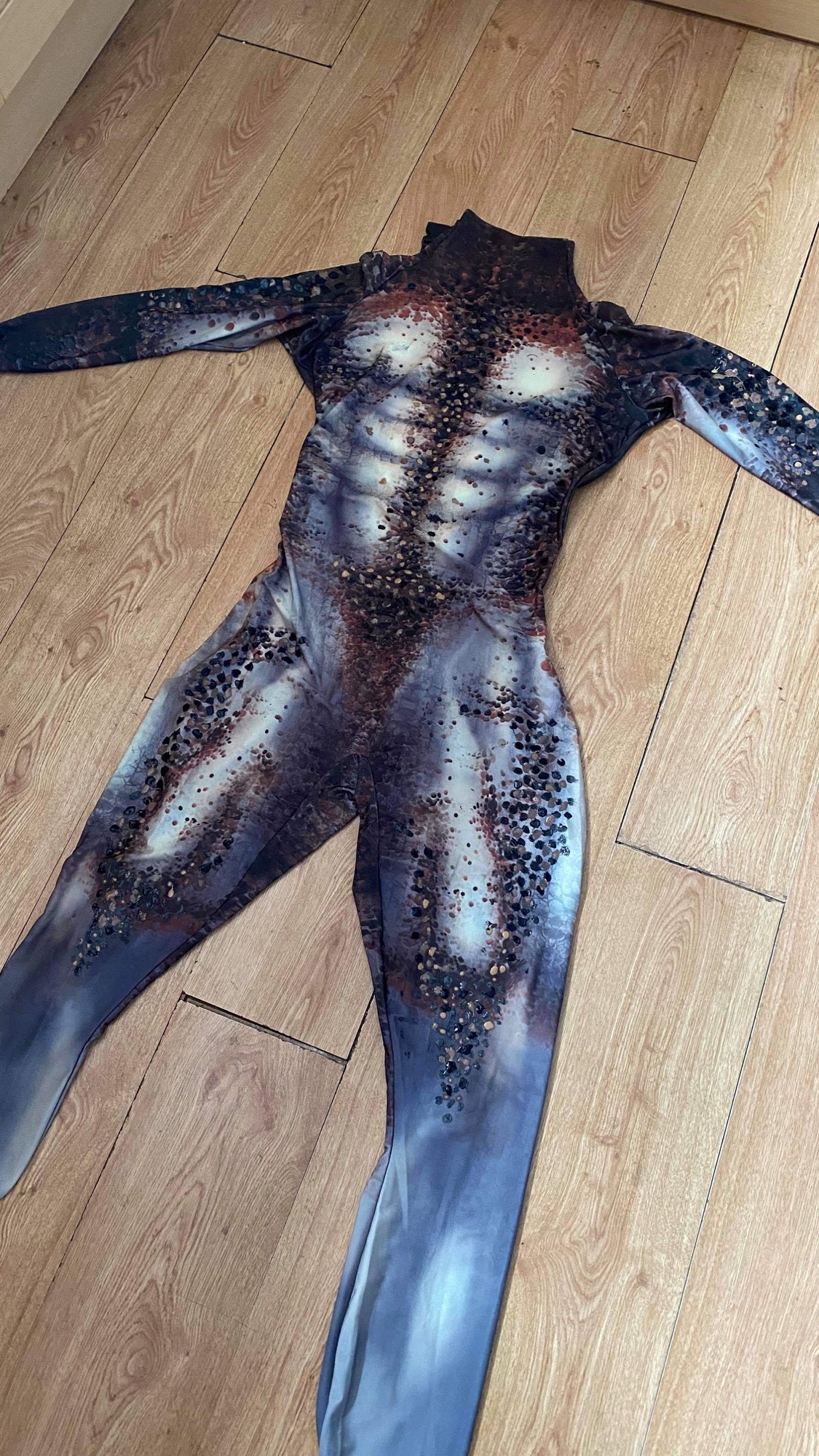 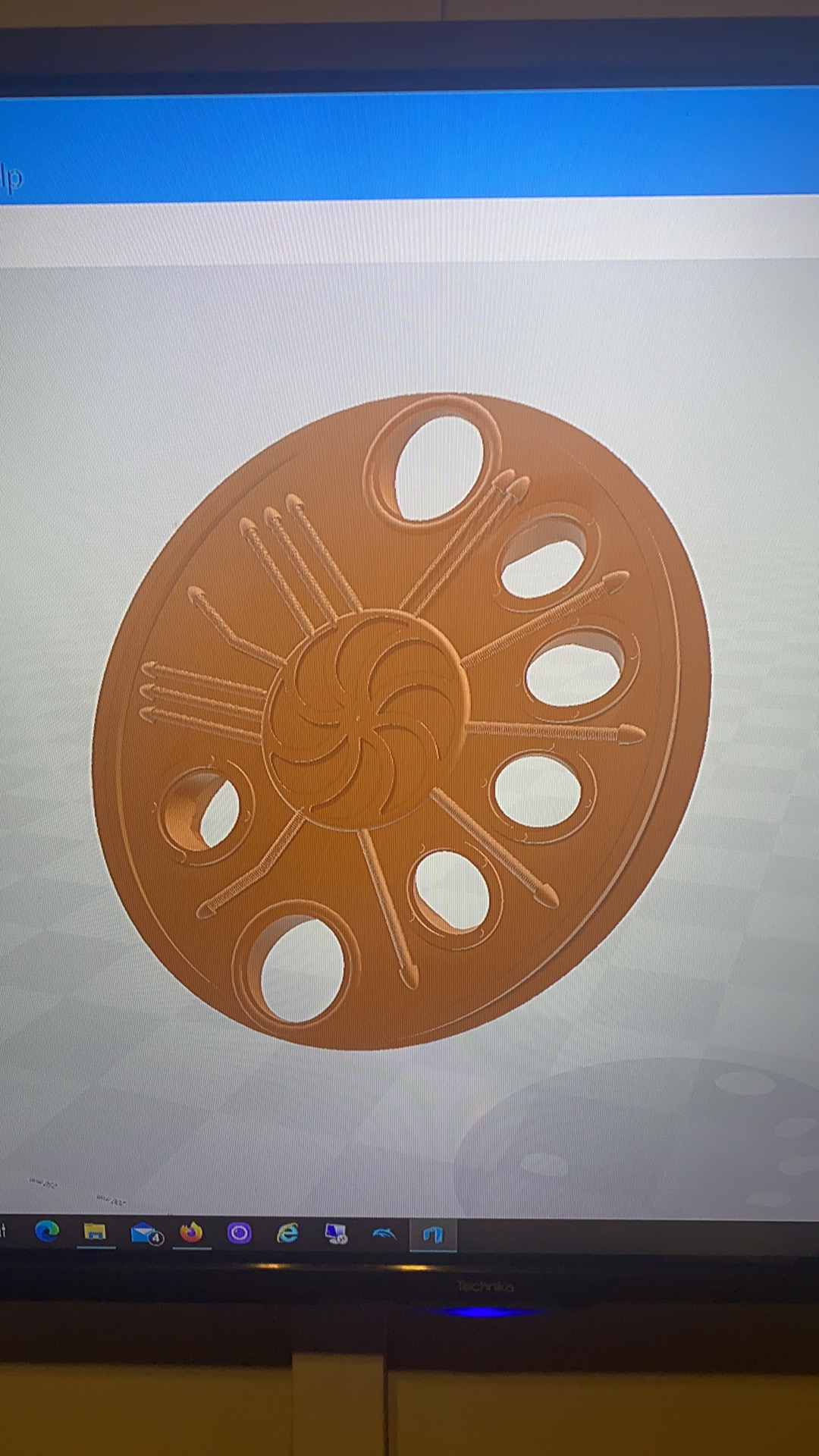 I also 3D rpinted a ribbed rolling pin. This allowed me to roll some plasticine with a ribbed pattern. This was then used to create a plaster mould so I could cast a latex neck seal.

So parts were printed, put together, painted. Soft parts were sewn and complete. It was time for a try-on.

Finally, I got to partake in a photo shoot along side a couple of other predators. Results: 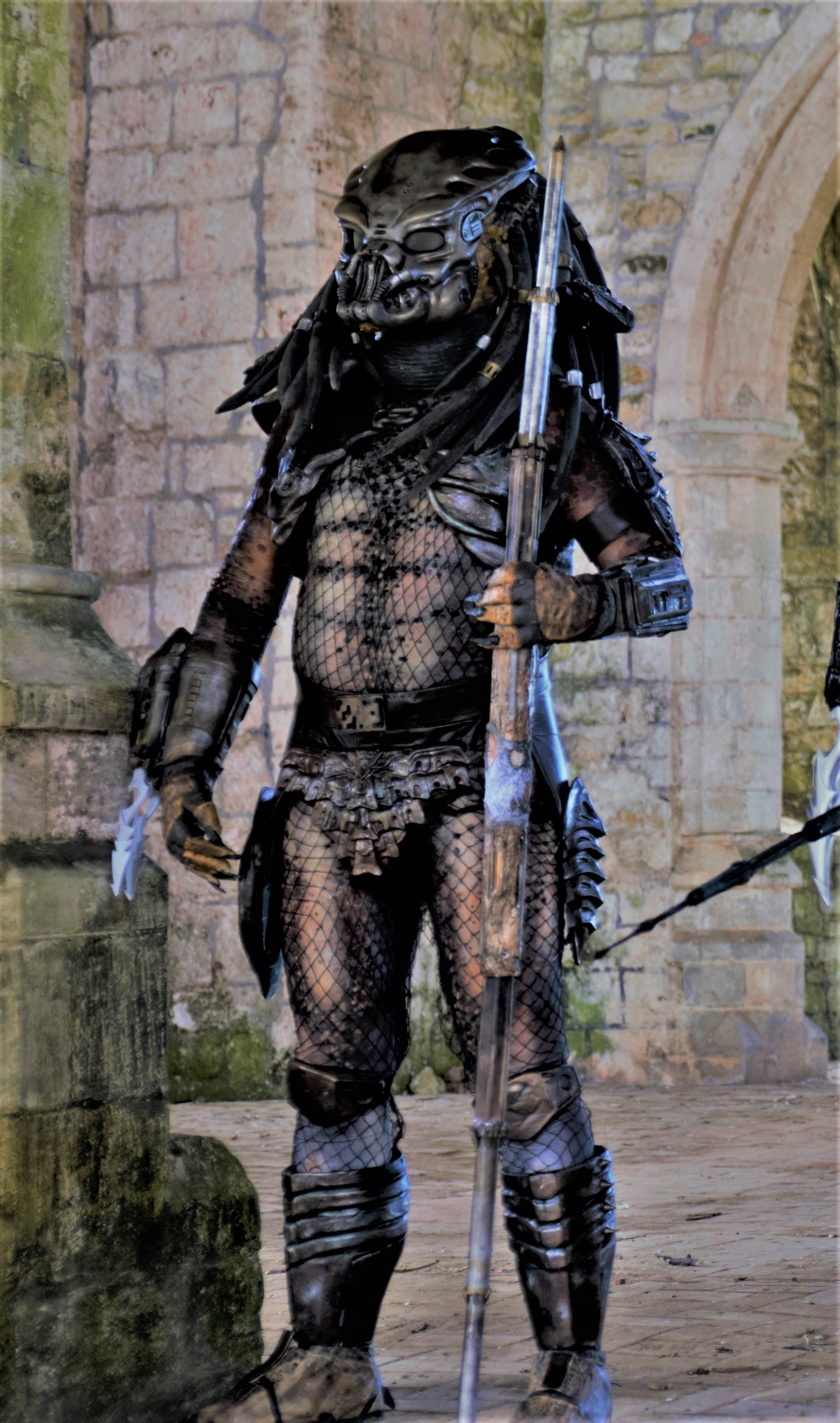 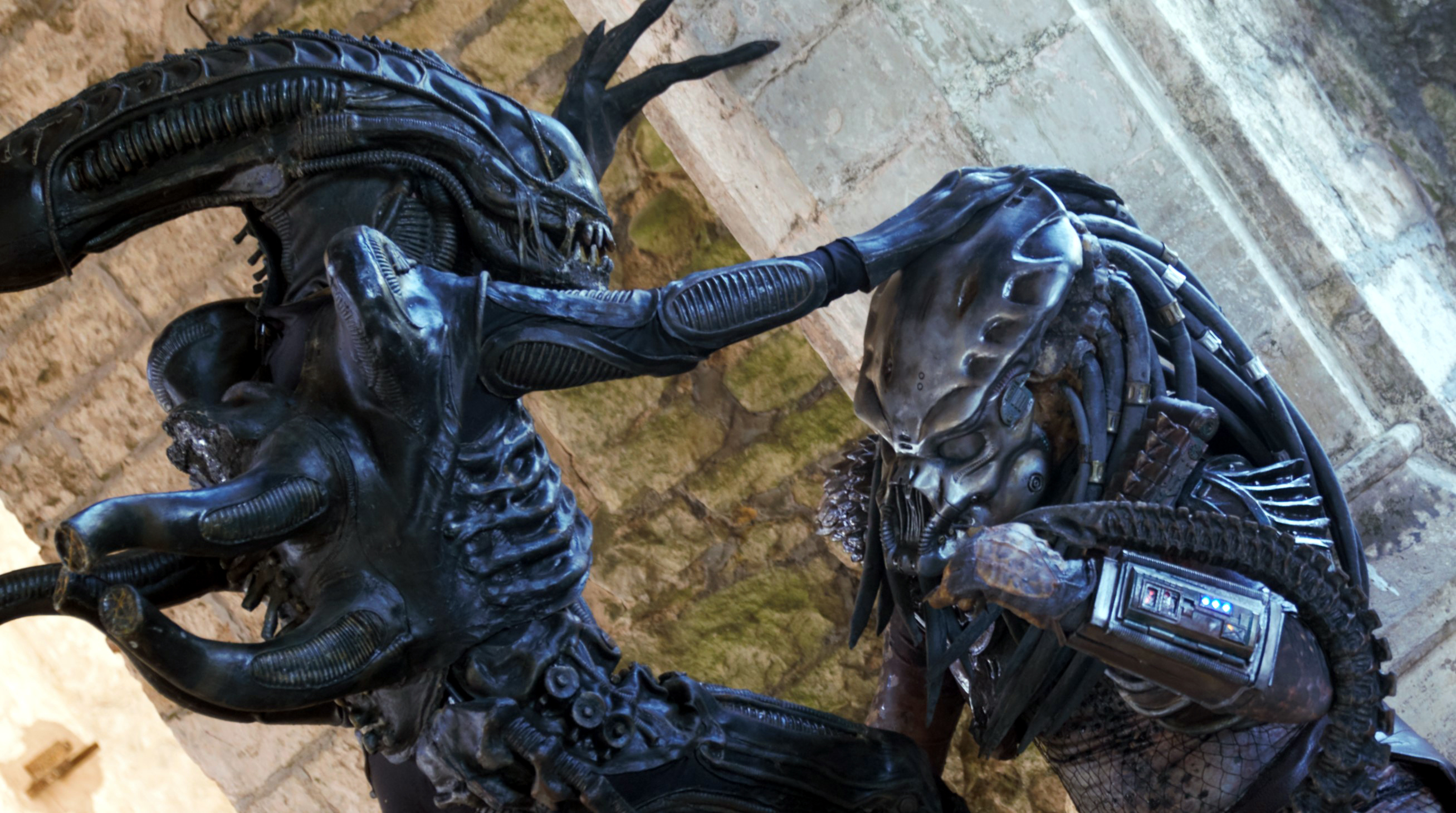 Well done and very good work Stew.... I never knew a lycra kind of suit would make a realistic result like this.... personally i prefer my latex suit because i can pour in some movie slime clear on it before going to conventions or filming. Which a lycra suit would not do the same wet look like a real skin.... if i was rich to not know what to do with my money I would make a Dragon skin silicone whole suit ... with the full animatronics and all.... but yeah you did an awesome work Stew congrats! And see you in a convention maybe one day who knows....

That is soooo cool, well done

You did a really great job making those costumes, well done!

I put a load of photos into a video for anybody who doesn’t want to read all of the above :
B

fantastic job. do you have social networks? I would like your advice. I have many doubts.
G

fantastic job. do you have social networks? I would like your advice. I have many doubts.