Figured since I made one for my nephew, I should also make one for my niece. Thought I'd try to get a little more intricate with the weathering on this one and tried my hand at a little chipping.
I still have to clear coat both guns, but they're otherwise finished 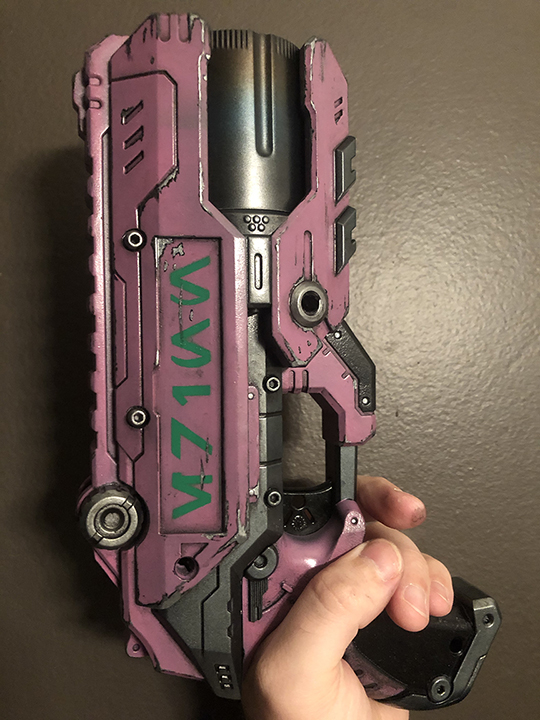 Jive Turkey said:
Figured since I made one for my nephew, I should also make one for my niece. Thought I'd try to get a little more intricate with the weathering on this one and tried my hand at a little chipping.
I still have to clear coat both guns, but they're otherwise finished

Nicely done. Other than the pink color, it reminds me of some Blade Runner designs. Those extra hex bolts make it feel so much more real. Great work!

RPF PREMIUM MEMBER
Here’s a few I did for fun. This “Hammershot” blaster is part of a larger display that includes a 1:1 Mandalorian “Taliban Hunter”....The blaster has a metal pic rail attached to the right side with a functioning target laser mounted to it. 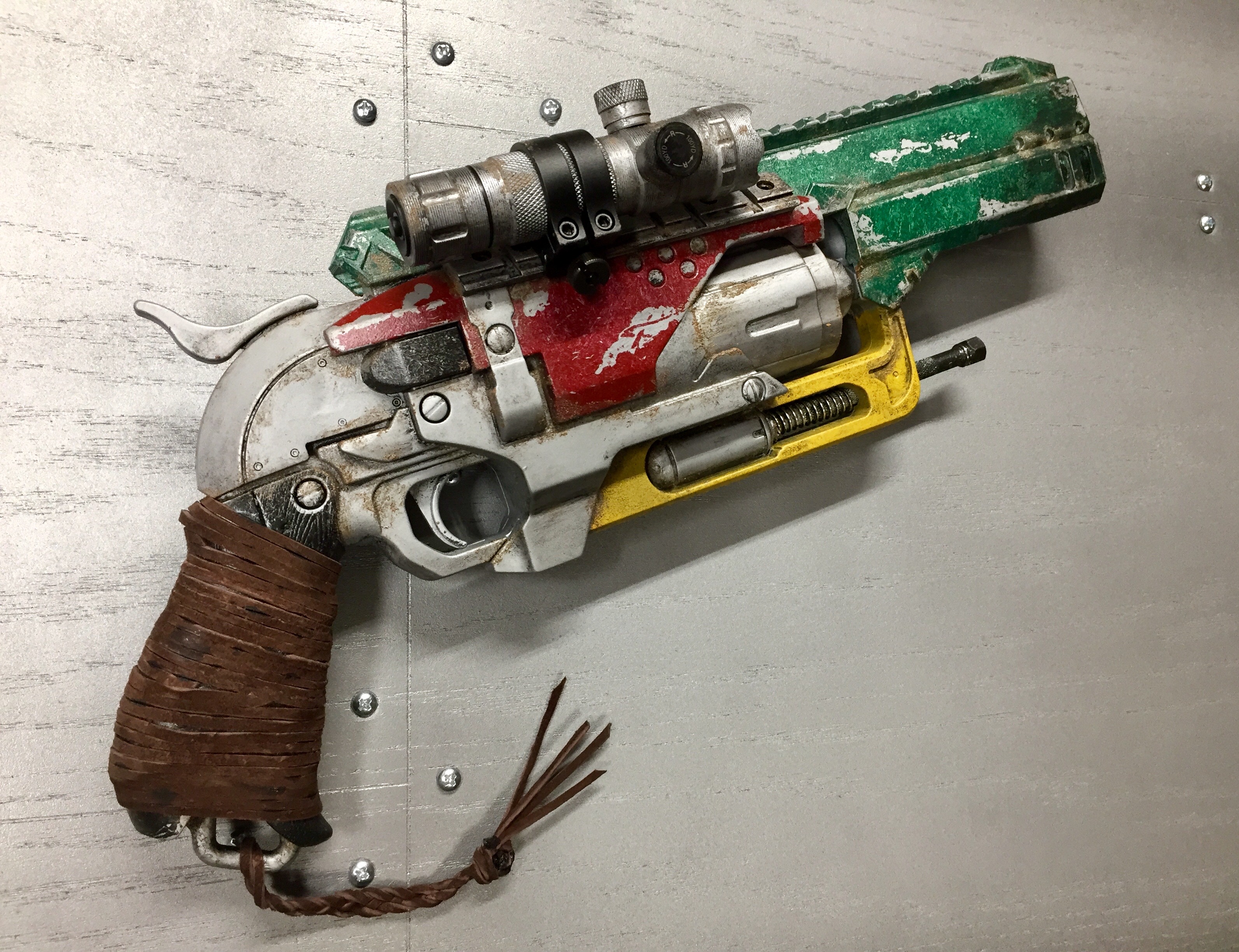 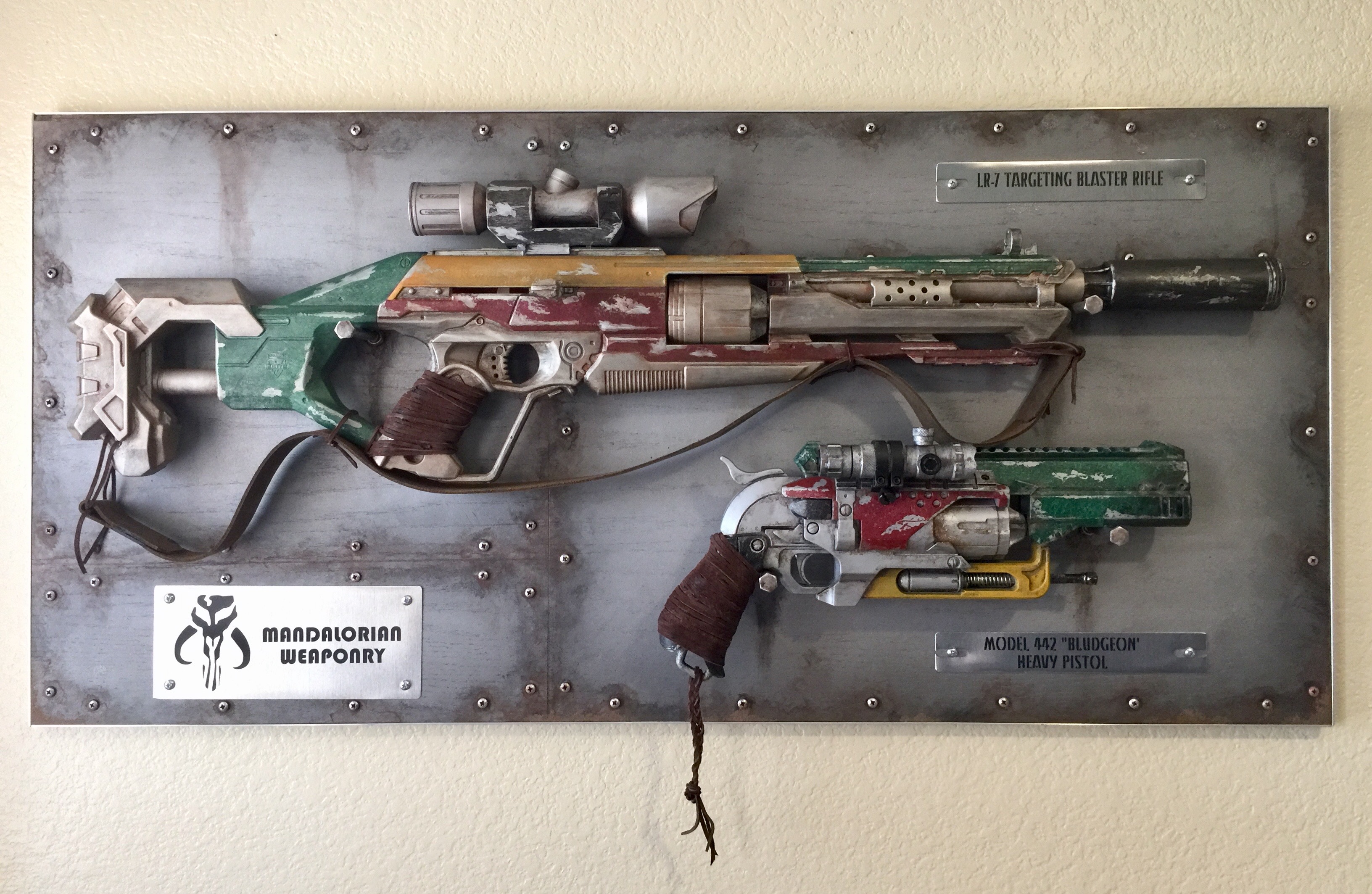 RPF PREMIUM MEMBER
They are very cool. Super inspiring and the paint jobs are fantastic.

RPF PREMIUM MEMBER
Posting this here as it does have a Nerf scope attached. Lol. Modded paint ball with attachments... 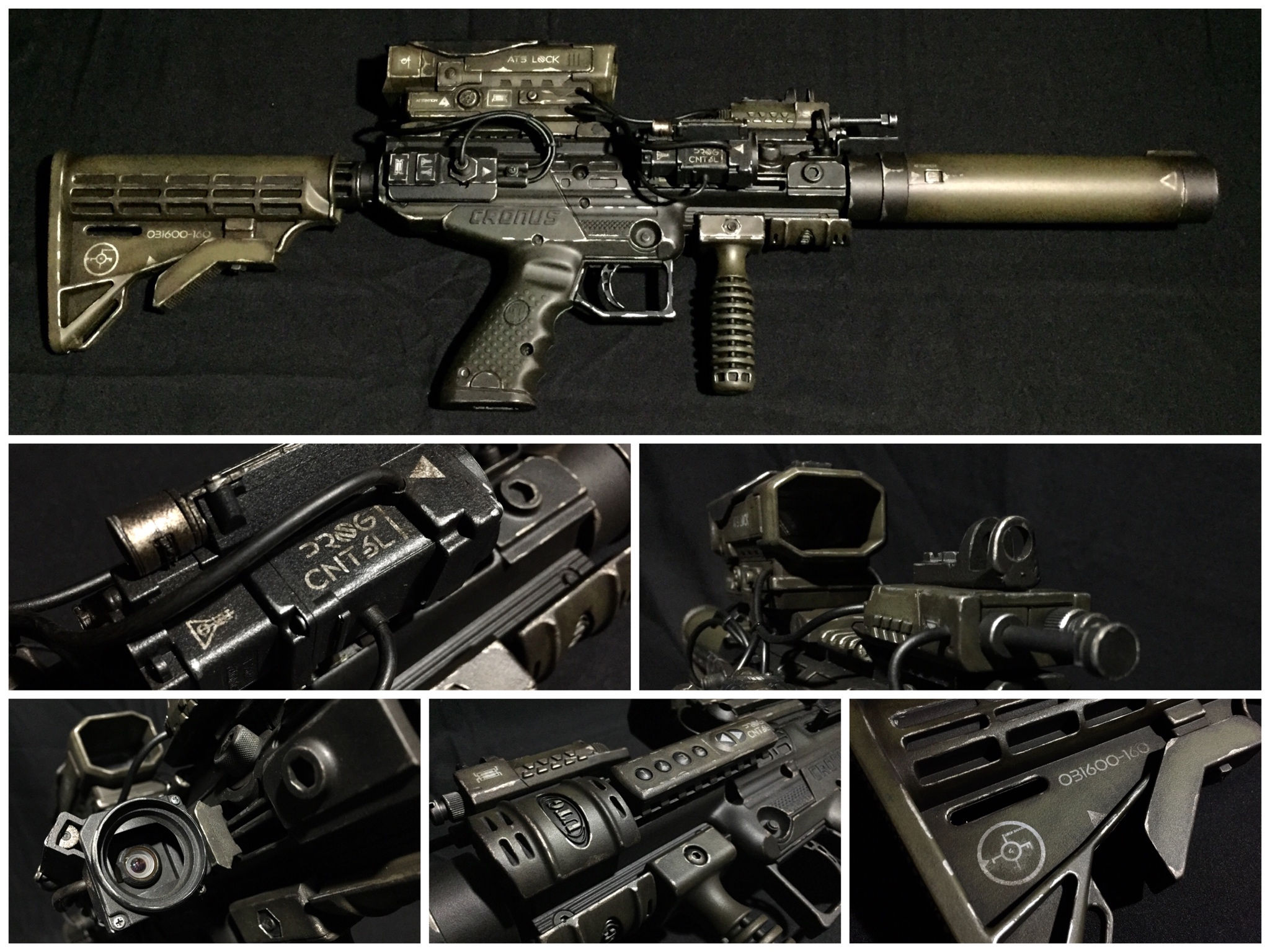 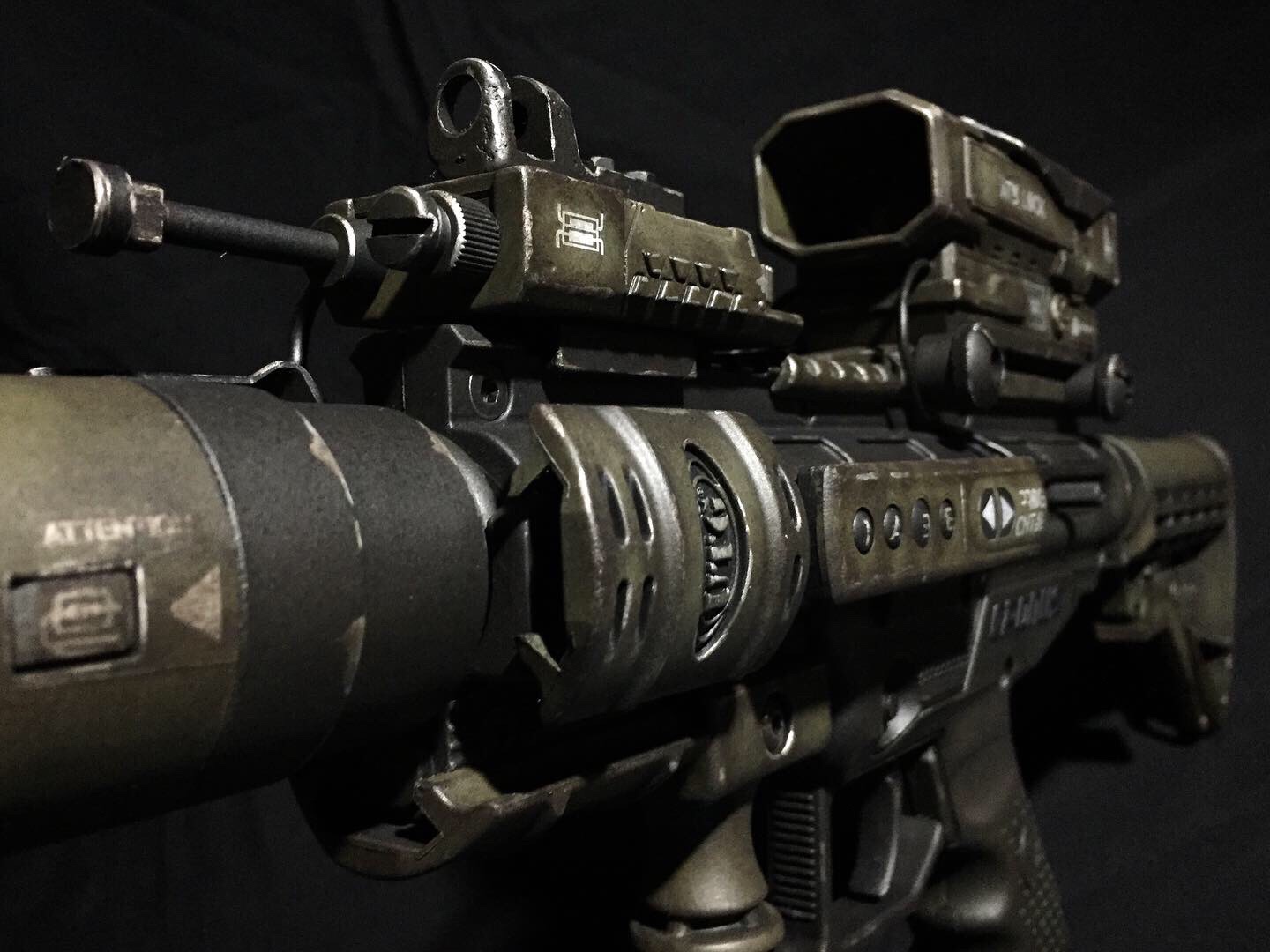 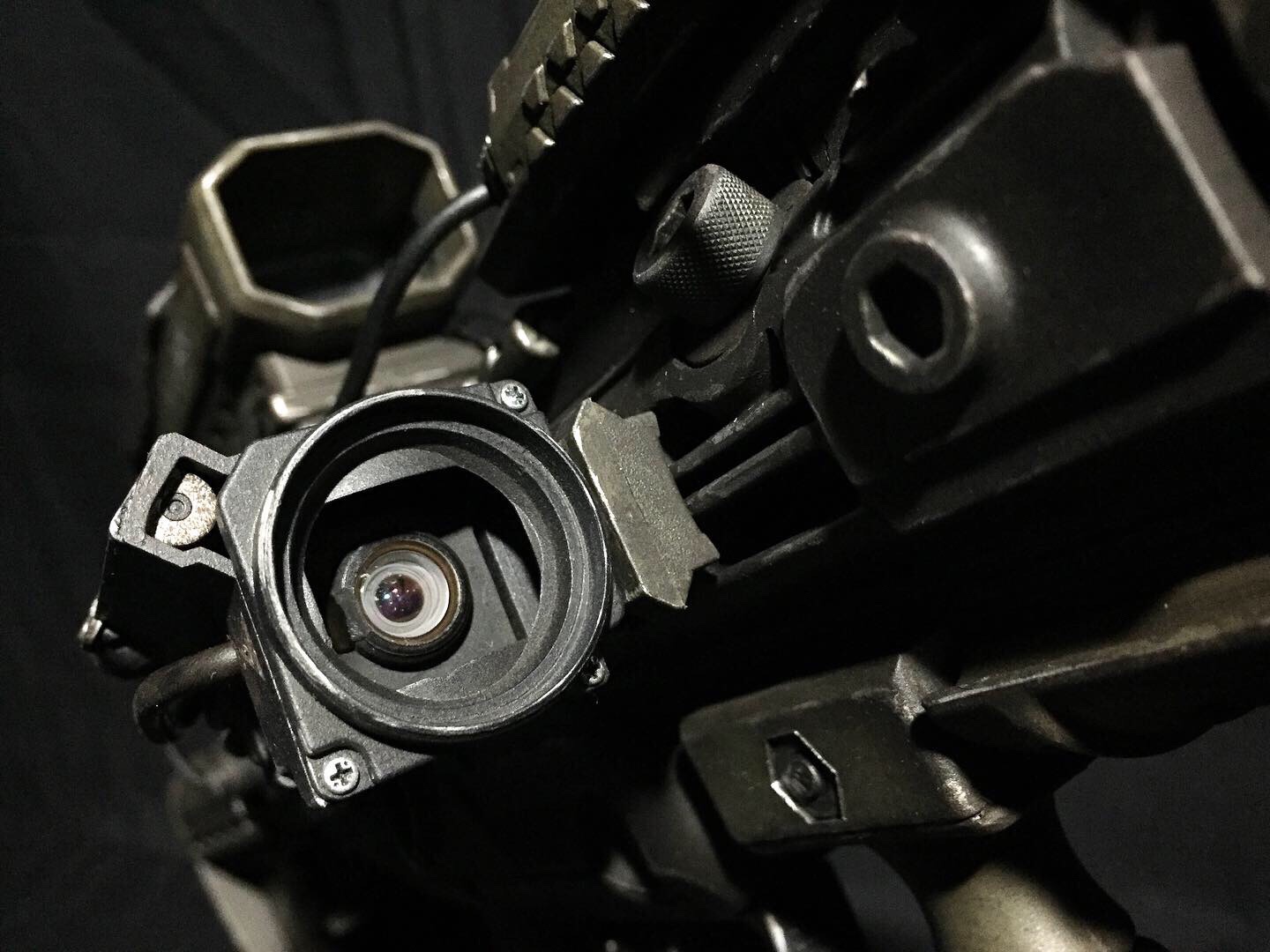 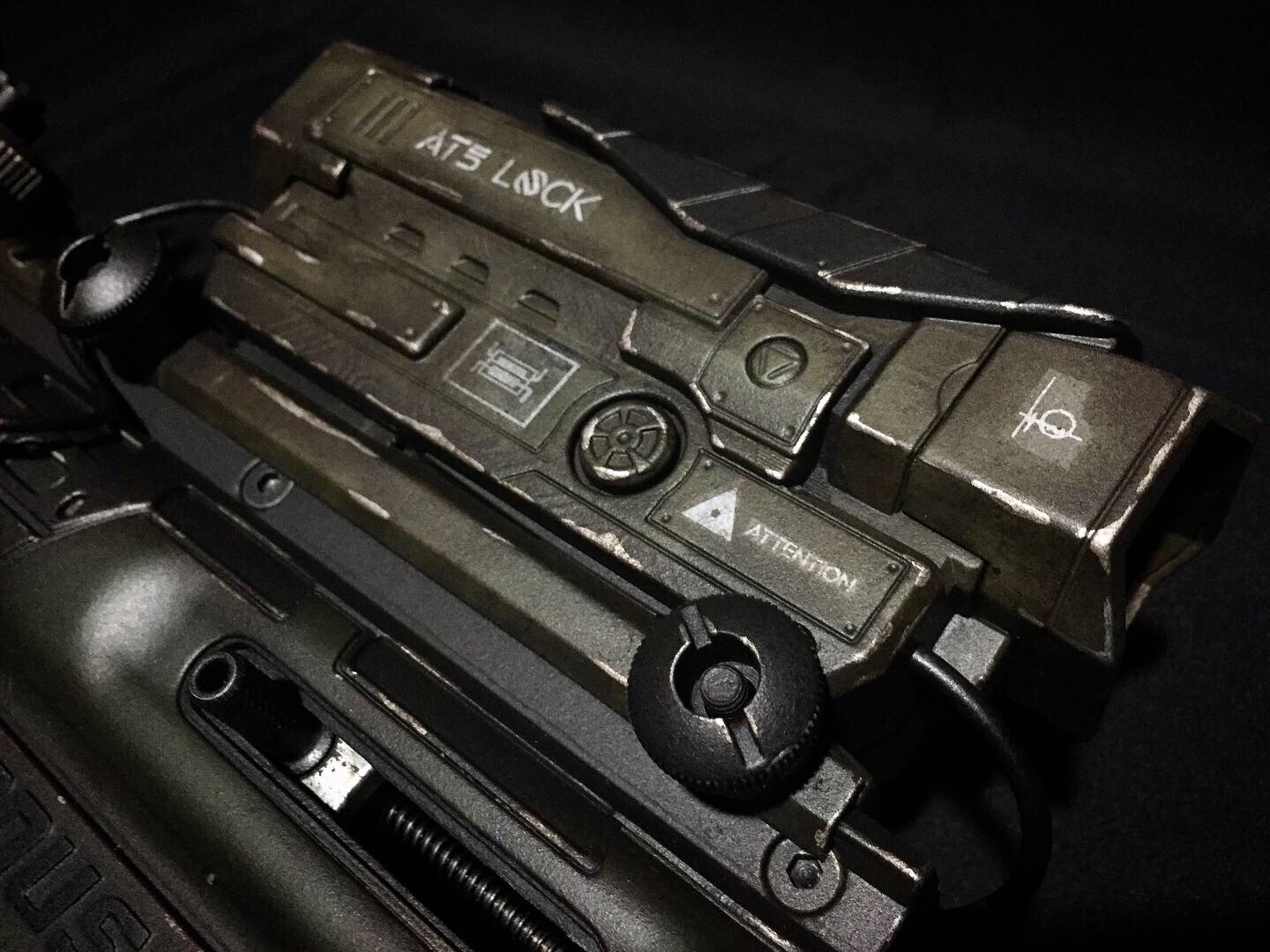 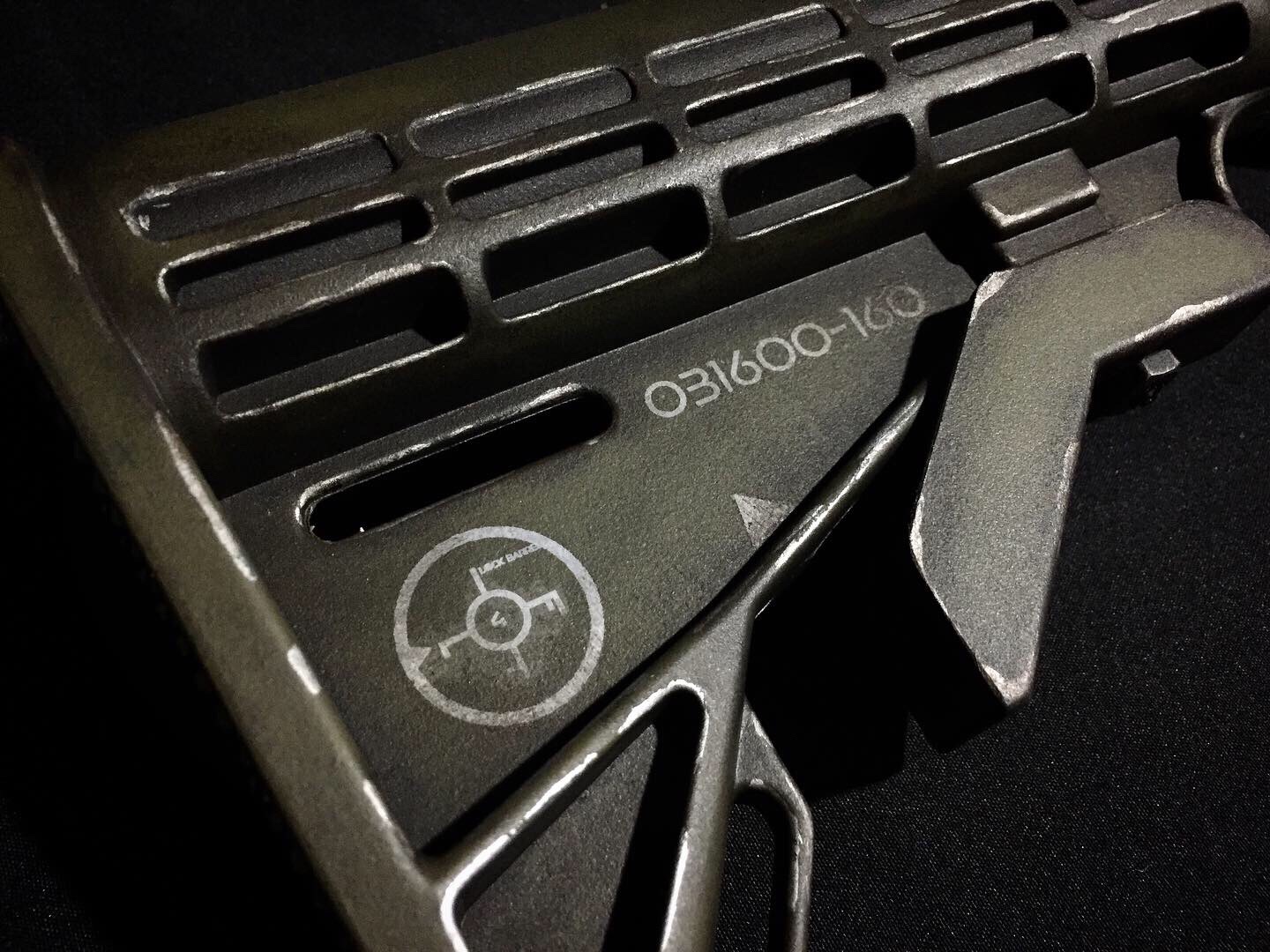 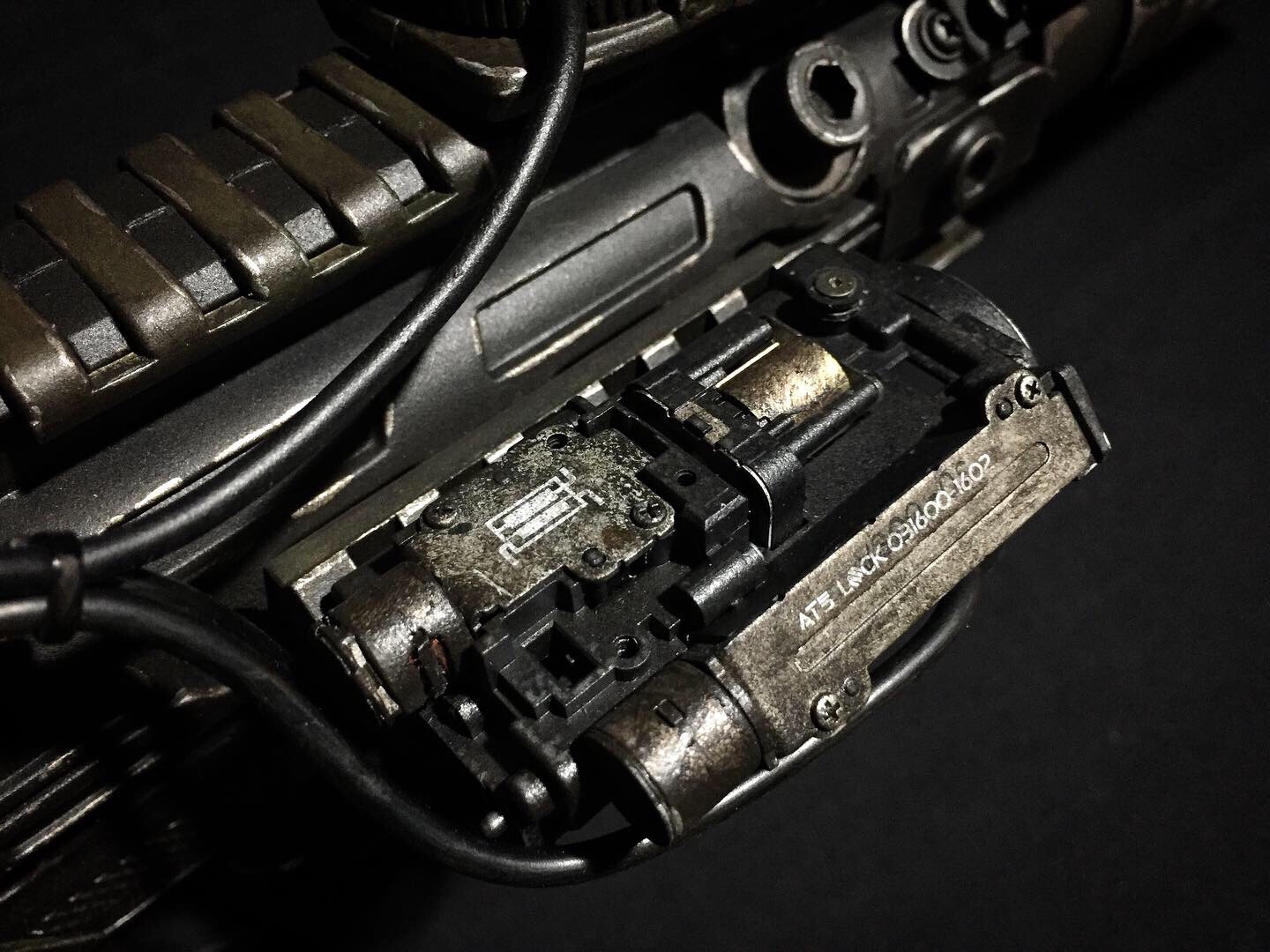 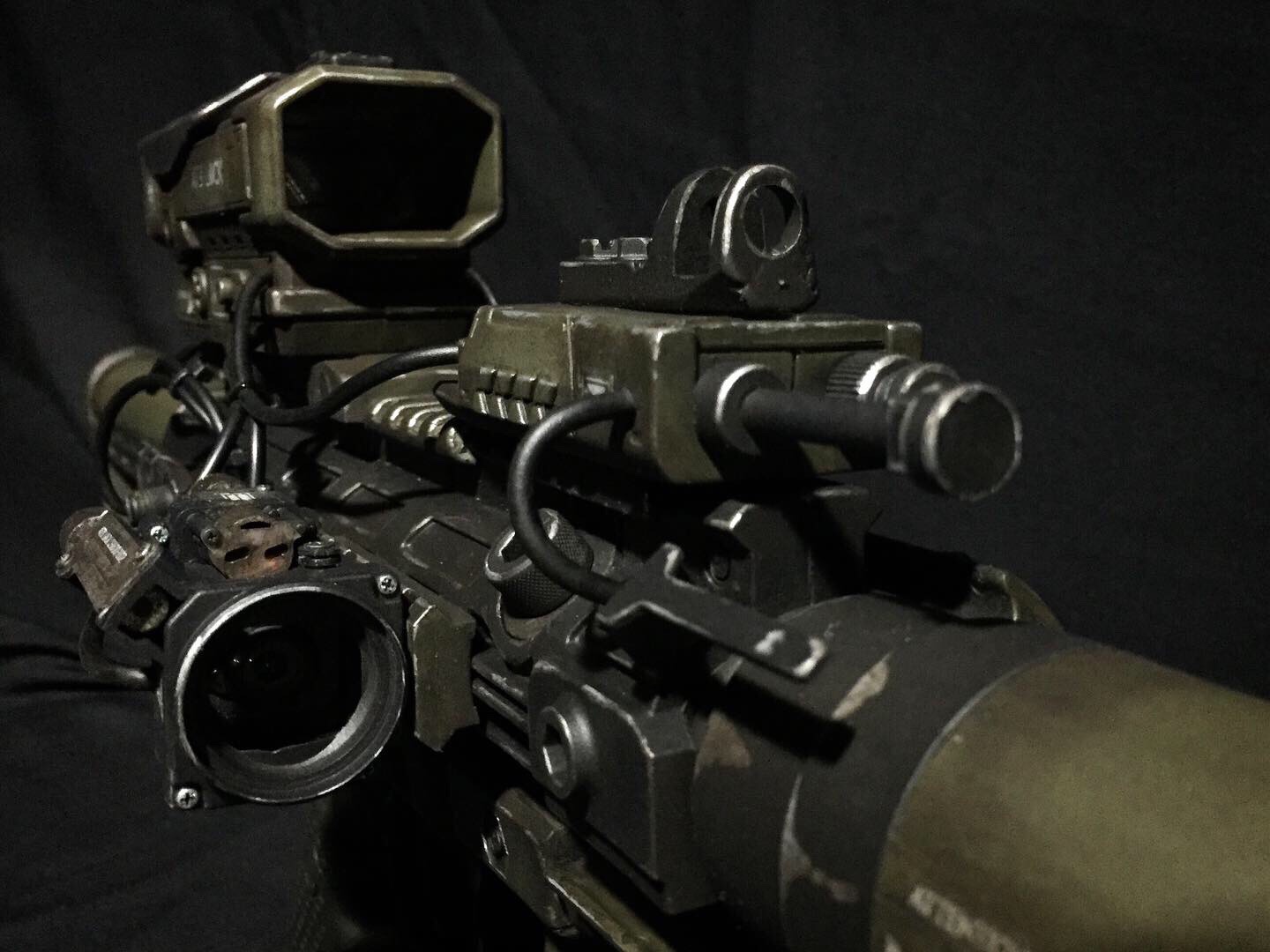 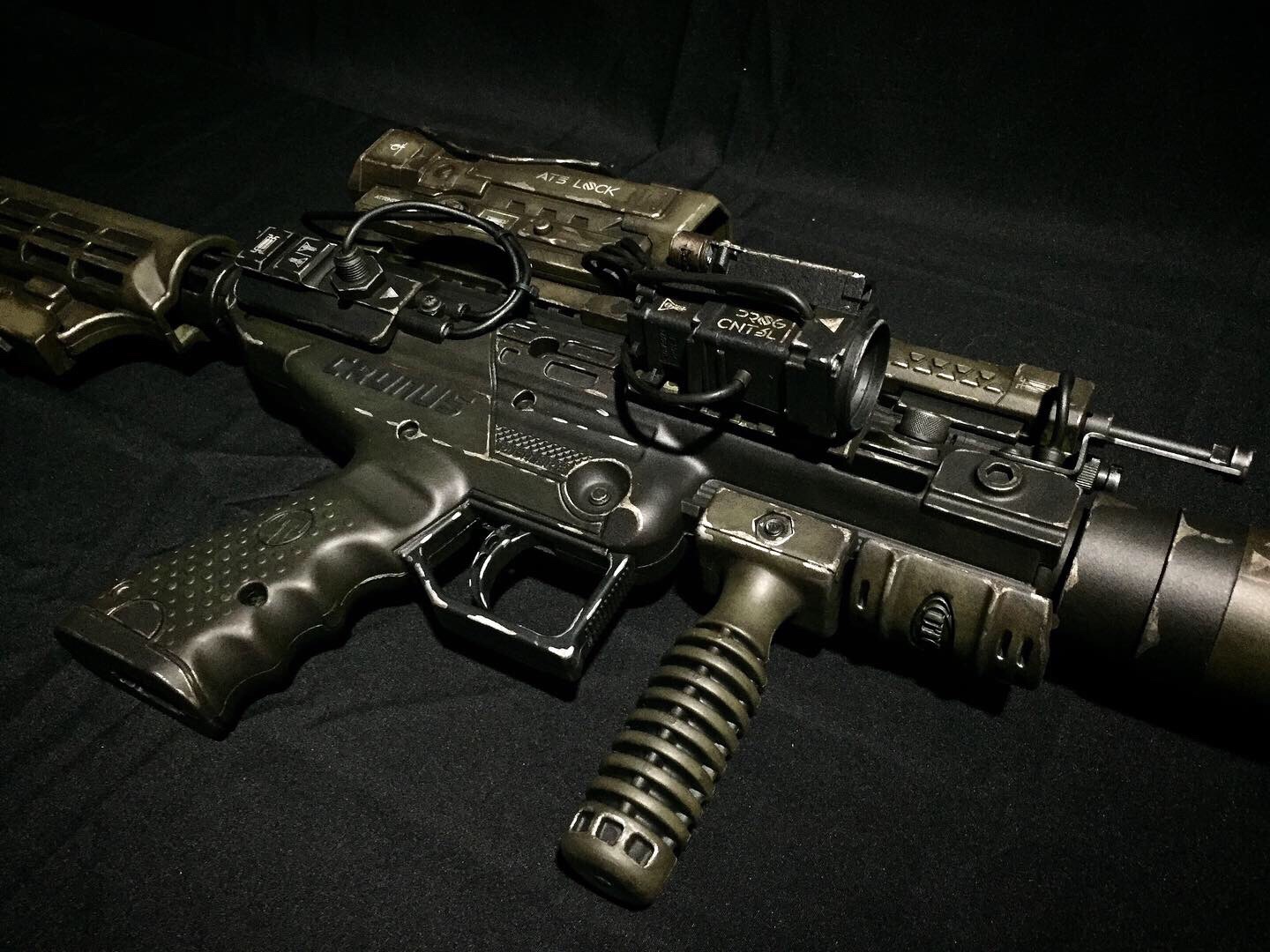 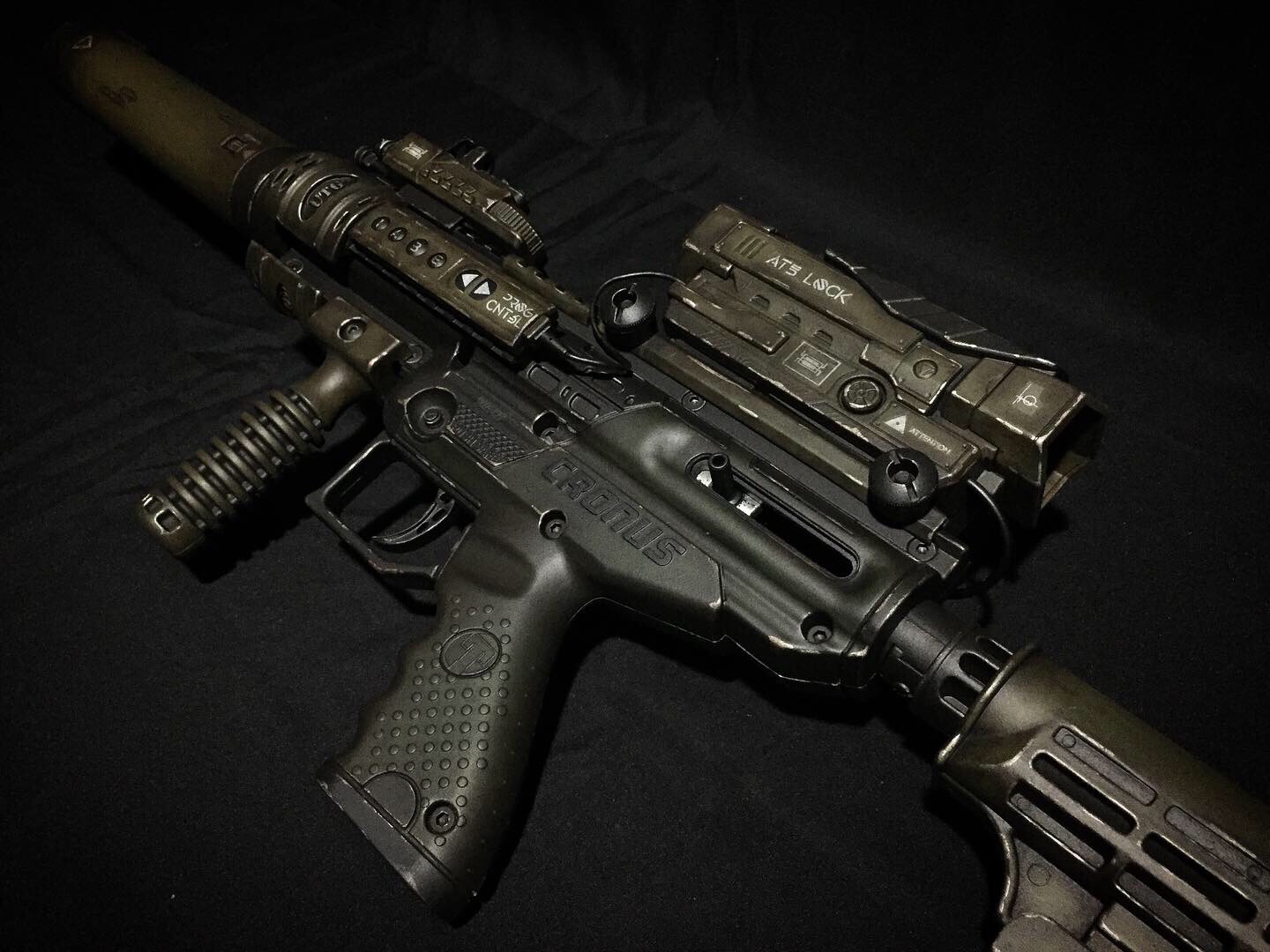 And here’s the before and after... 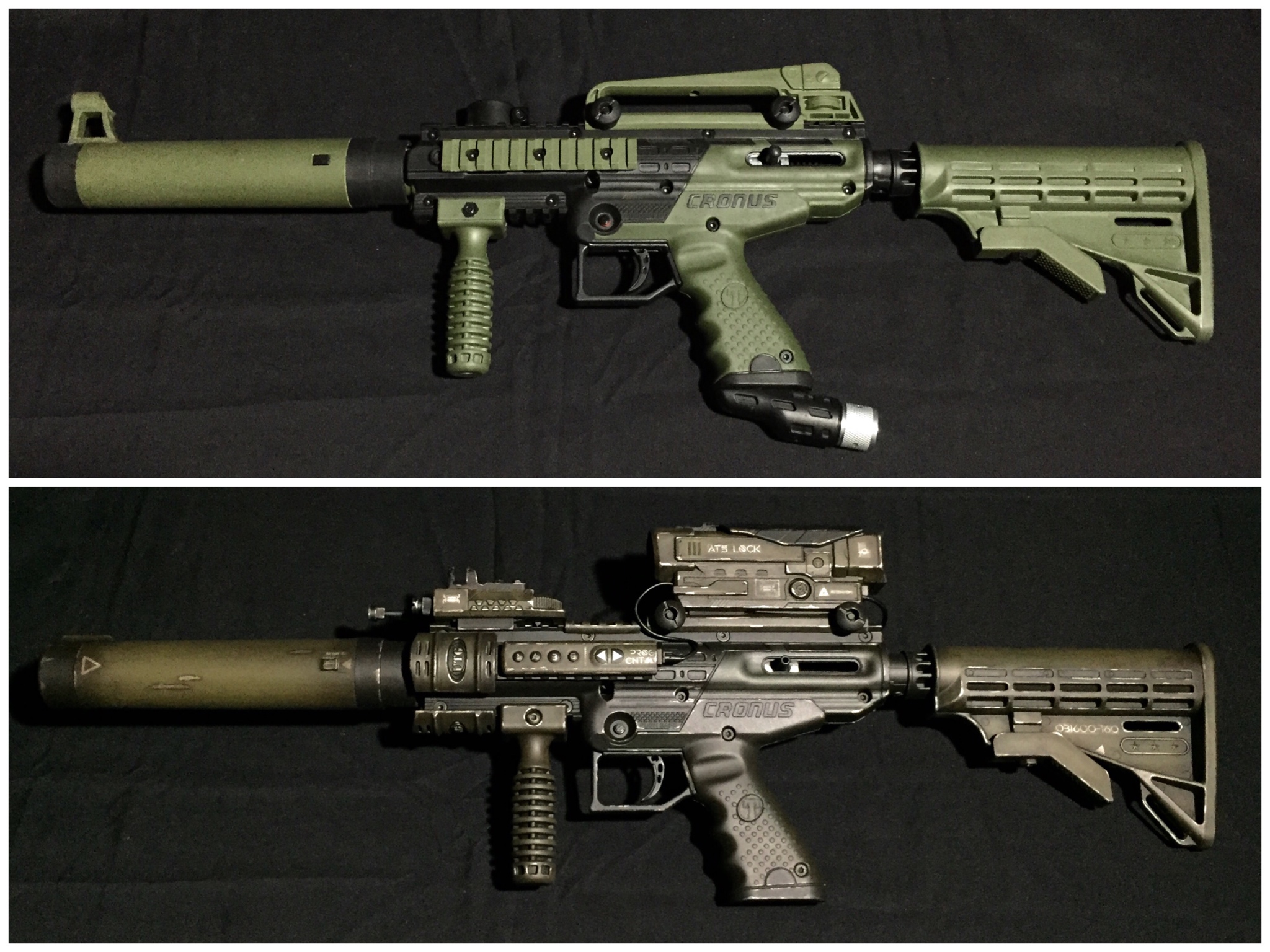 RPF PREMIUM MEMBER
Did you use an airbrush Tmax? Love this one!

Soulinertia said:
Did you use an airbrush Tmax? Love this one!
Click to expand...

Actually nah, I’ve got one but I’m a noob with it. This shadowing effect was inspired by dmpsk8 and his mad paint skills! He uses an airbrush but I replicated the effect using a dry-brush technique. Just dabbed more in the corners and feathered it out from there. Used the same technique on my Titanfall CAR build... 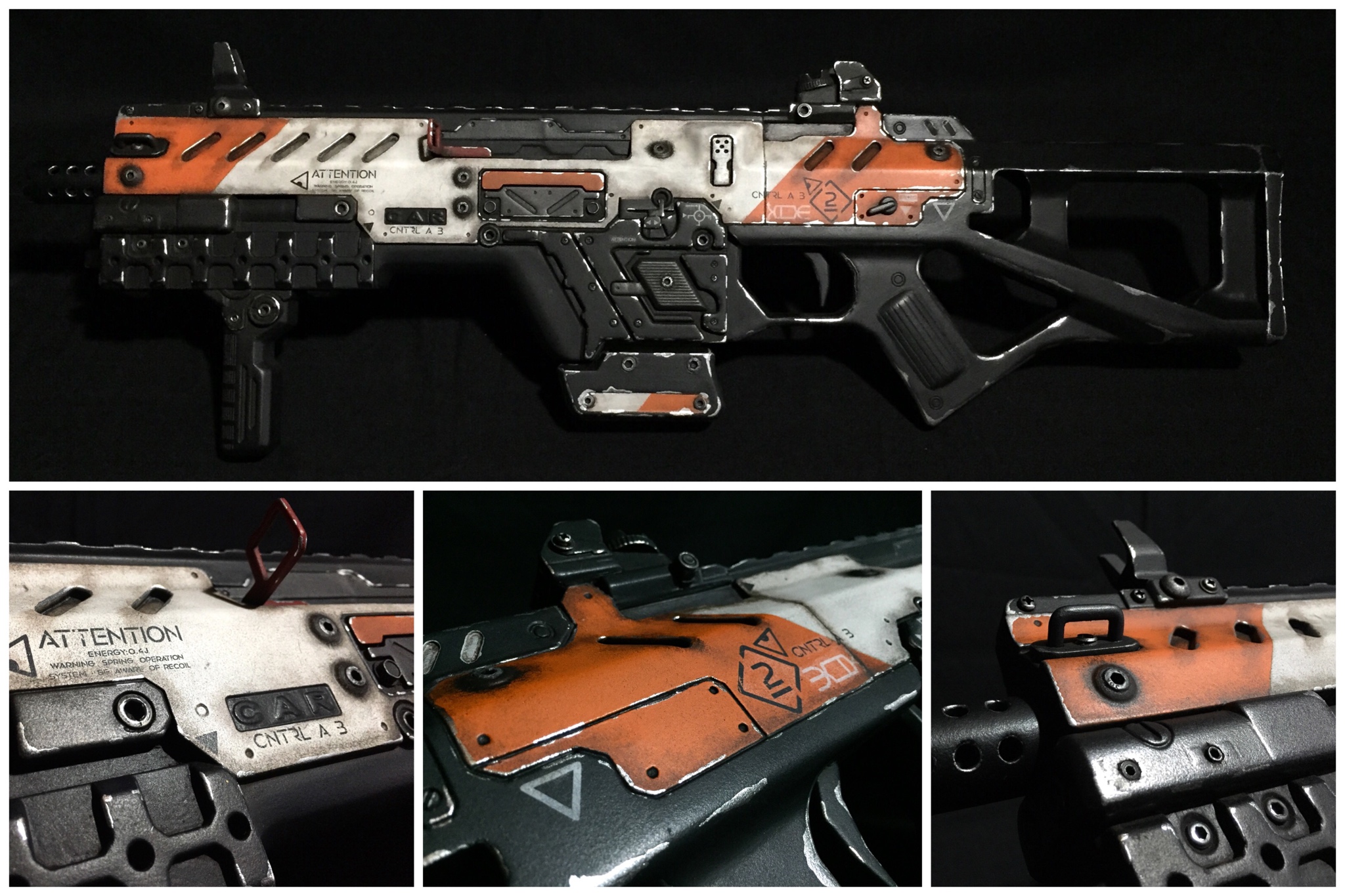 I just acrylic paints for weathering as they are quick and easy to use. And if you’re not happy with the result you can wipe it off and start again. A good tip also is to not just use black, but rather a really, really dark brown. You wouldn’t think it but the difference is significant. It looks way more like grease and dirt than black paint does. So I do an initial black-wash all over, then the shadowing with dark brown. I then lay down a flat (matte) clear coat, then finish with the silvering.
Last edited: Mar 20, 2020

Hi all! It's been a while

My latest mod-job is actually the first blaster I ever painted. It was looking pretty sad with paint missing from various parts, due to either being overlooked or from wear'n'tear, and a grindy/sticky opening mechanism, so I decided to do a redux version.

I love the engineering of this blaster - it's a torch!.. 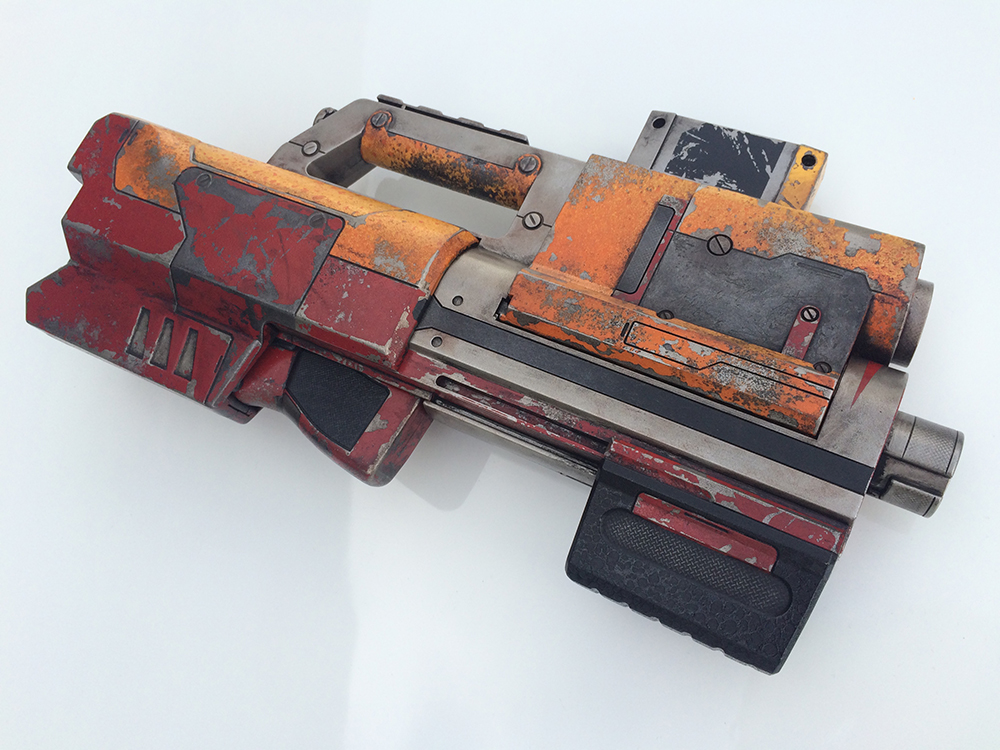 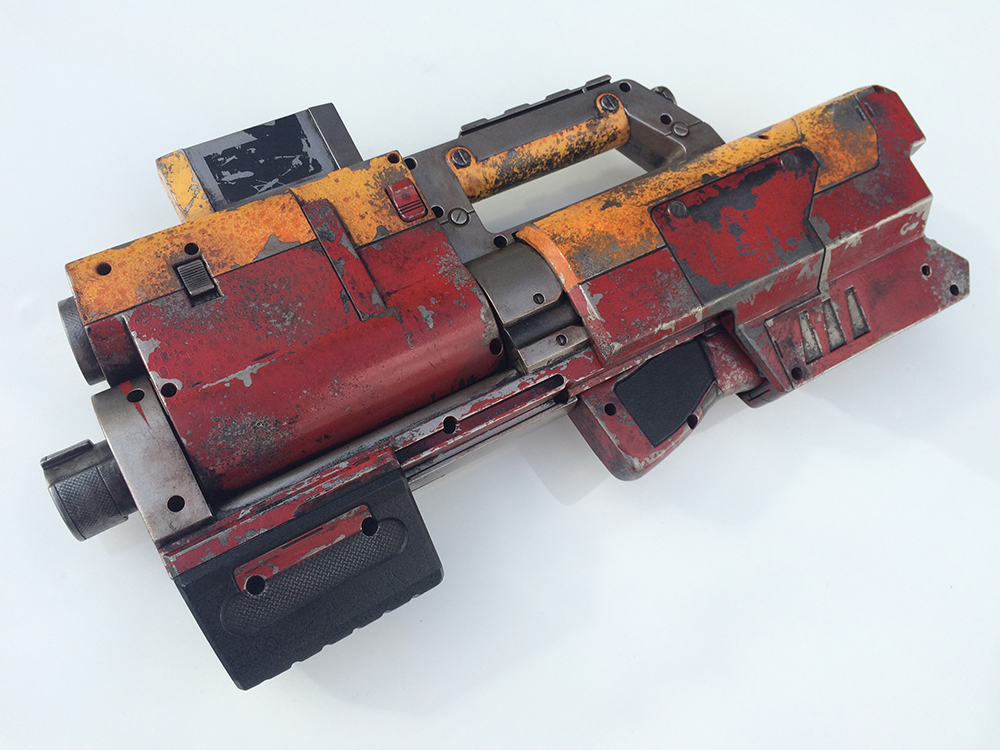 ...It's a blaster! The secret to friction-free movement is furniture polish, in case you haven't seen my instagram lately... 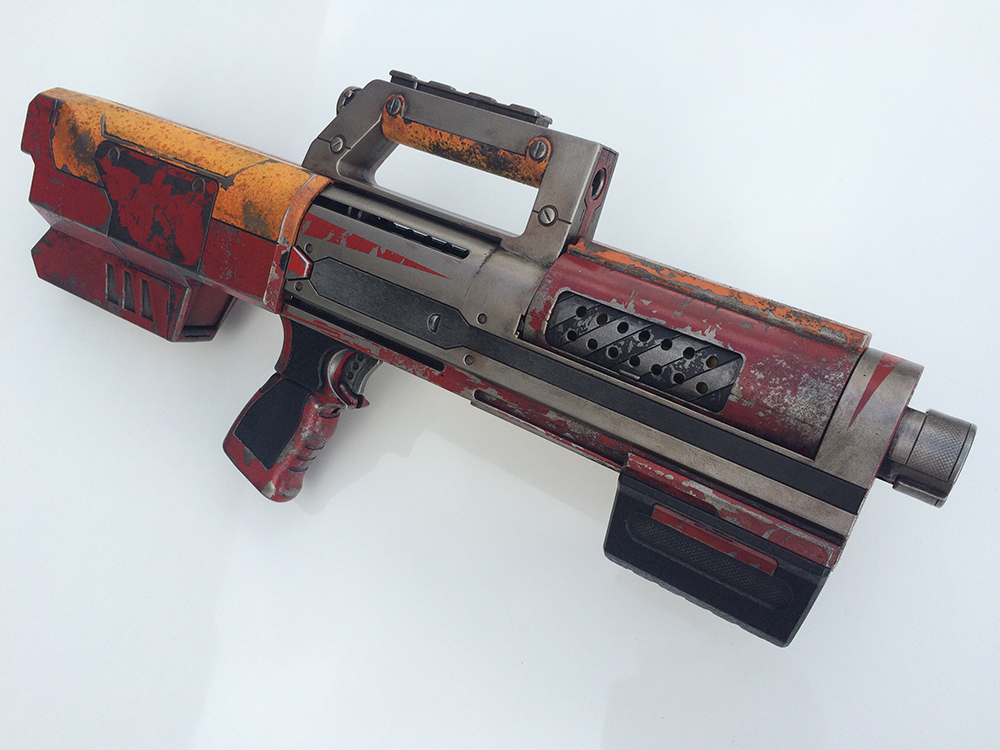 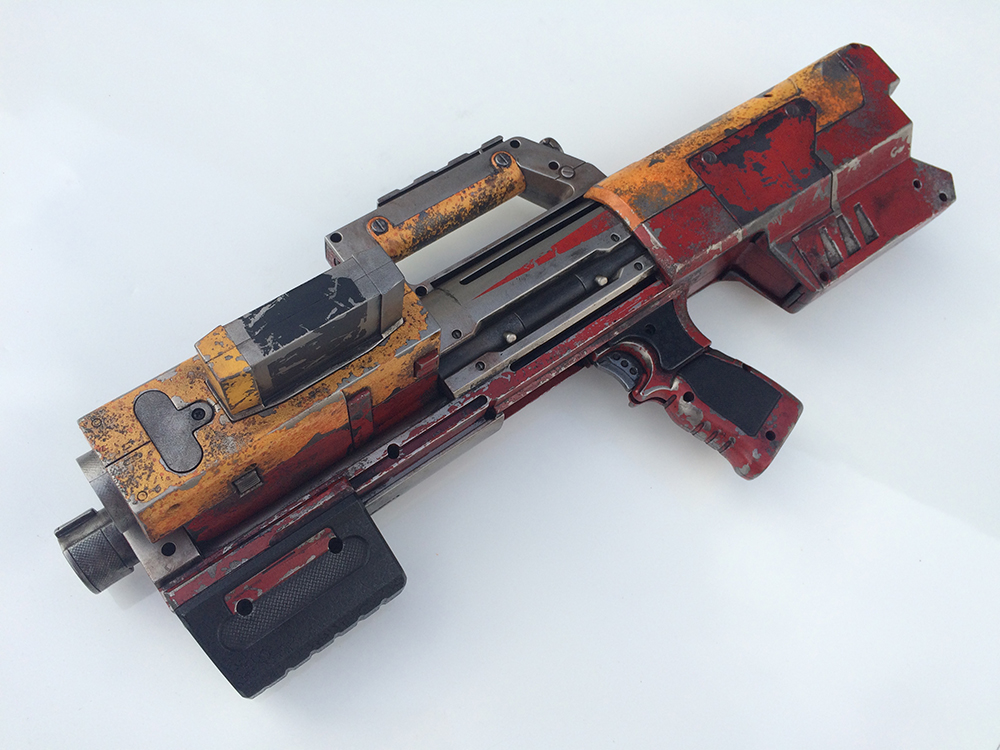 Many, many details... There's a few small modifications that change the blaster subtly - the catch and release buttons had surface details removed, the pump-grip was de-detailed and reshaped slightly, the jam door was de-detailed, and the magazine also. 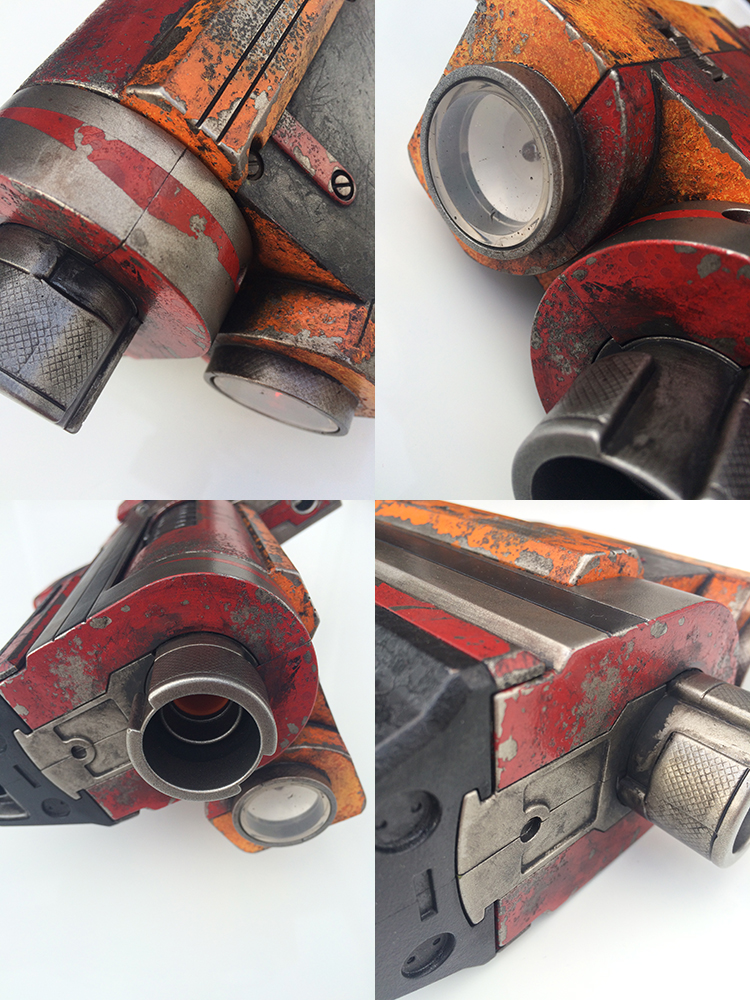 The corrosion and paint-chipping is my usual technique, but skipping the rust step and combining the salt and latex directly on the metal layer. 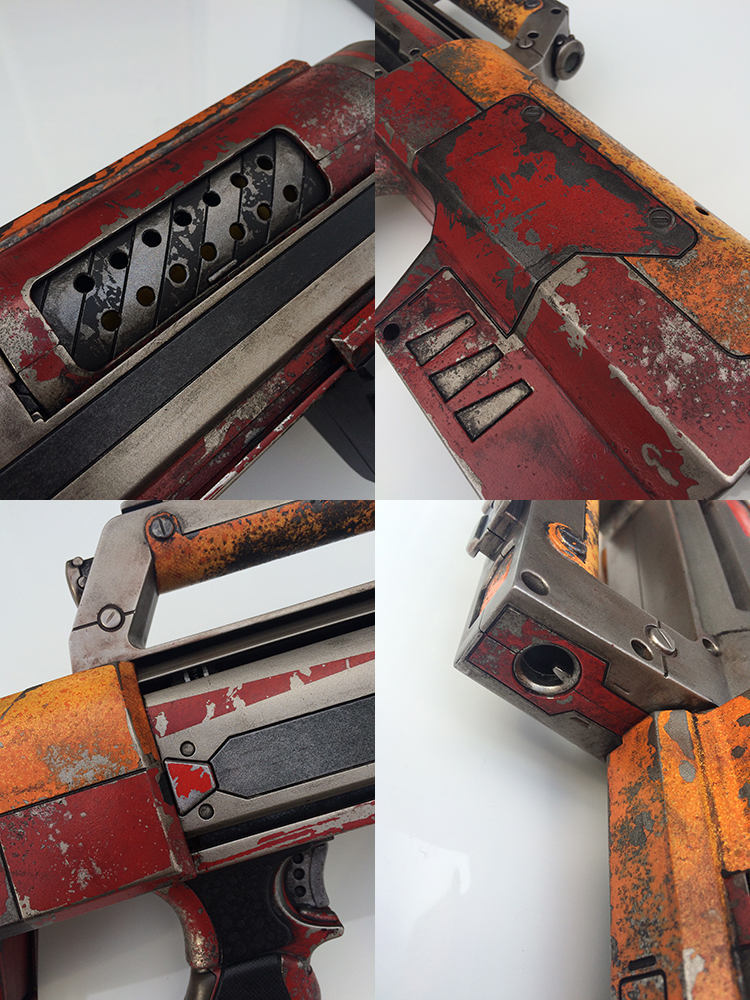 A second effect employing a water droplet mask was used to obtain the reticulated effect in the colours. 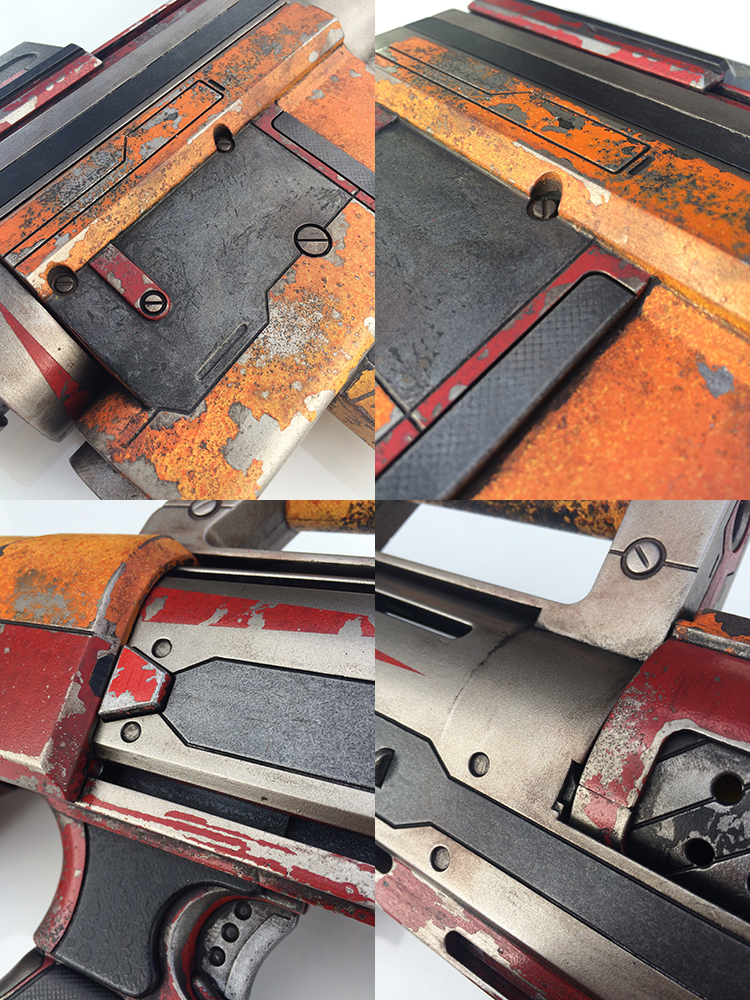 Two grime washes with slightly different tones were used to show the 'open' and 'closed' form in the dirt and grease.

The scratched metal plate was a mis-step where I forgot to remove a latex mask from the panel before the colour step. It was difficult to remove with 2 layers of paint and latex masks, so I had to grind on it a bit - I decided afterward that I liked the effect and kept it as is... I mean, look at the job that black primer is doing there! Magnificent! 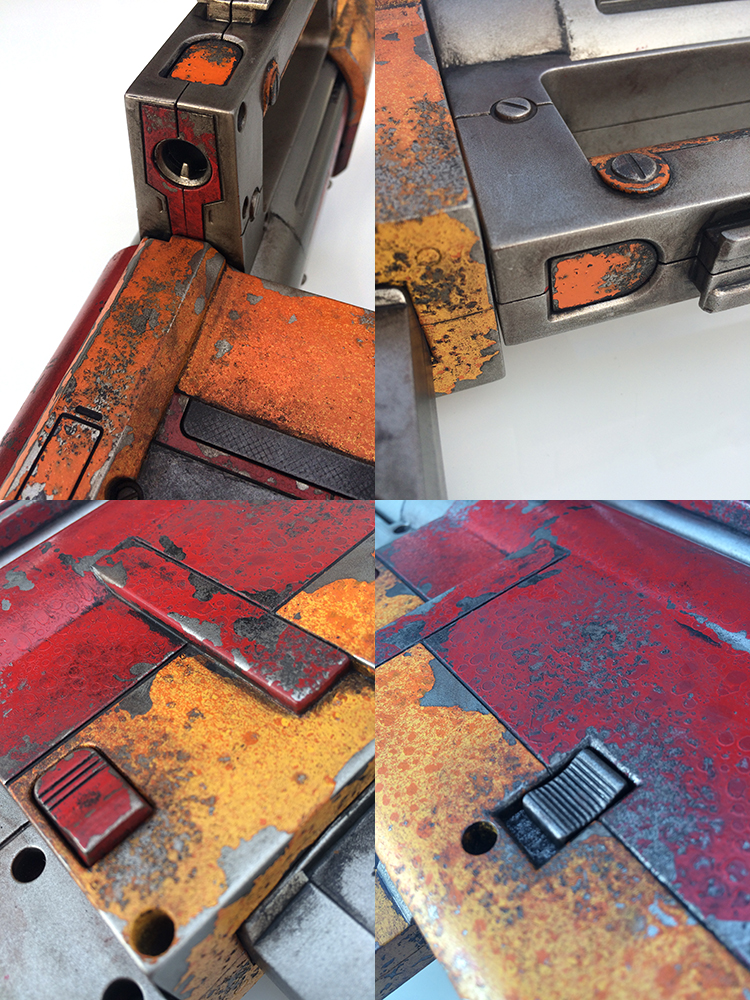 The switches and buttons got extra layers of the metal coat to increase their resilience. As a bonus, you can really see the reticulation effect coming through in these pics too. 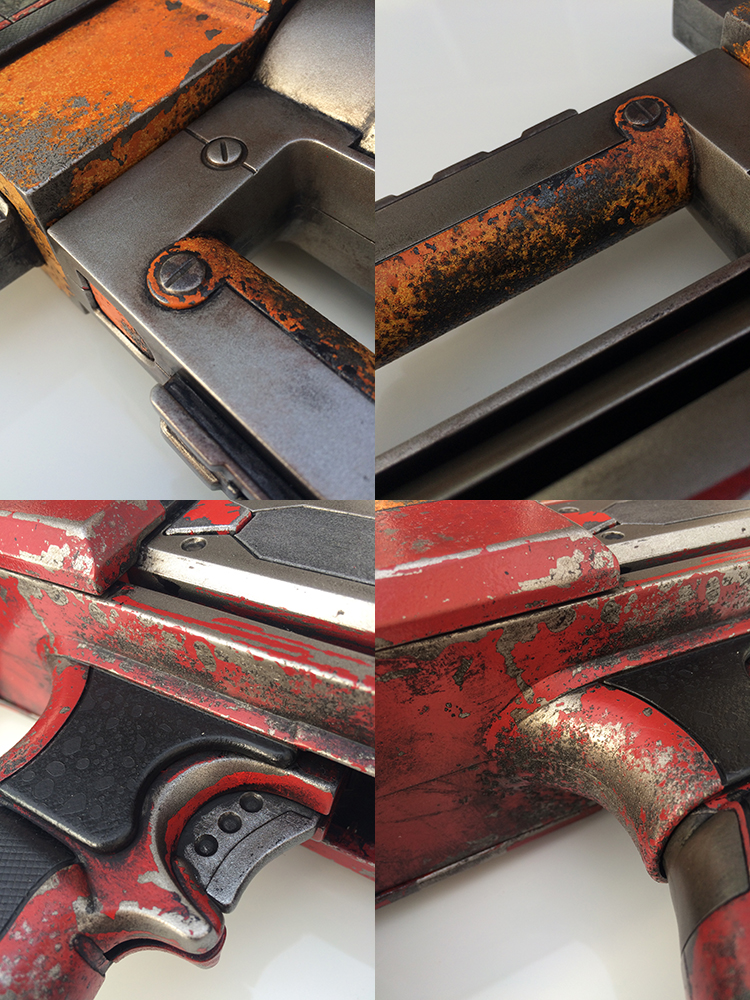 The trigger was tricky. The plastic they use - a soft, flexible substance commonly used in hi-impact areas such as pull-rings, muzzles and lanyard attachment loops - is extremely resistant to paint. Even sanded to a furry surface, the merest scrape will strip the paint off. Luckily there's little-to-no friction in the assembly. 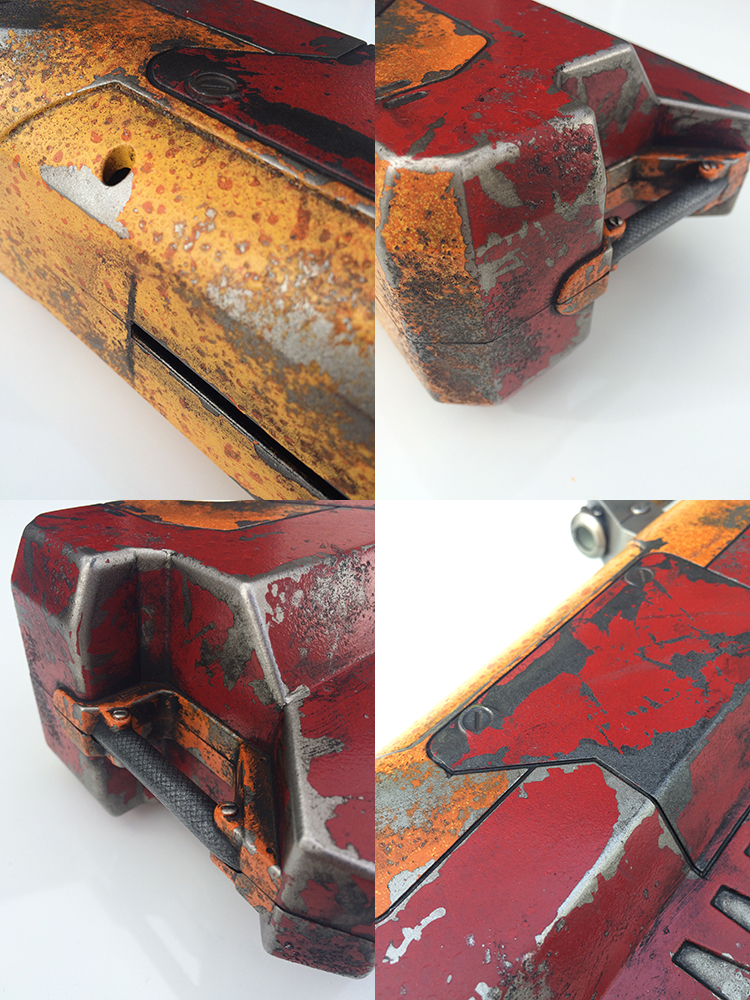 The contrast between the yellow and orange worked - I over-estimated the difference between bright red and colonial red unfortunately... oh well. 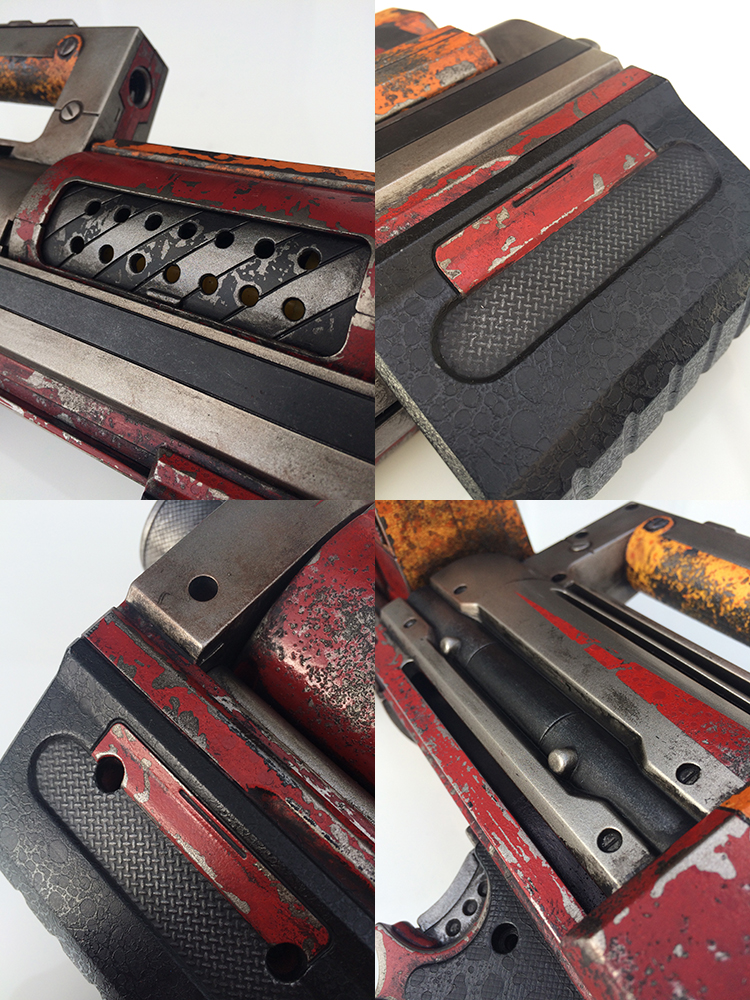 The matt/gloss black on the grips came up sweet - the same water-droplet mask effect as the colours, but resulting in a perished rubber look that I'm more than happy with.

And it moves sweeter than it has for a long time thanks to the aforementioned furniture polish applied while reassembling. The silicon wax is a great zero-residue painted-surface lubricant.

If you made it all the way through, thanks for looking, and keep on Nerfing

Someone in one of the Fallout FaceBook prop groups I'm in brought it up that the Nerf Demolisher, with it's underbarrel launcher cut off, looks like the 10mm SMG from Fallout, and I can't unsee it.

What tools are recommended for cutting the plastic Nerf guns are made of? 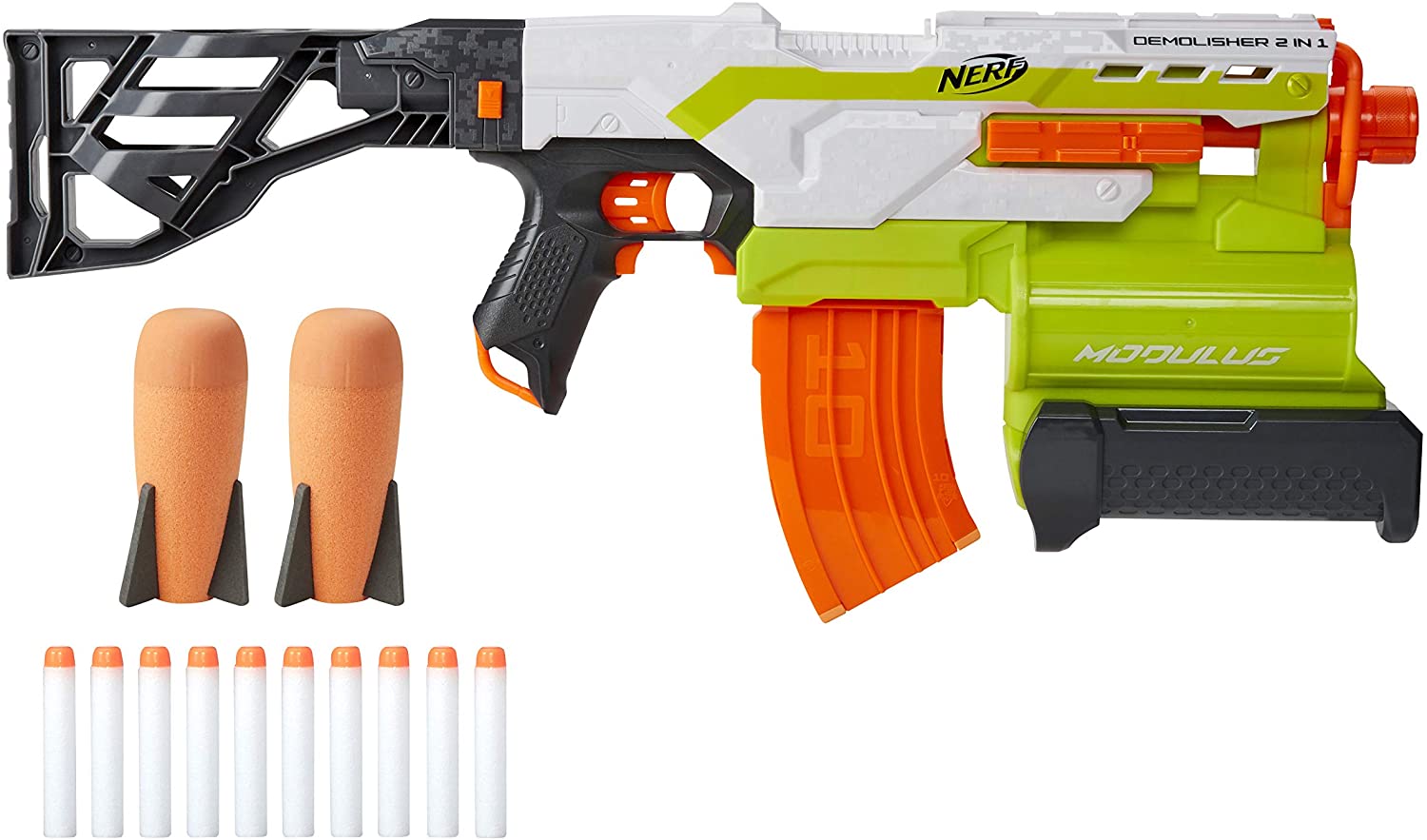 A Dremel should do it, just be careful not to re-fuse your cut by getting the plastic too hot

Yea, if you have a small hand saw that you can do the majority of the cutting with, I would recommend that, over the dremmel. my experience with using any sort of dremmel attachment on nerf grade plastic, is a pain in the ass because it just melts back together in a ragged wad as you cut. To easy to dork up a part of it you don't want to, and have molten slag you've got to go back and cut through again anyways. My $0.02.

Okay, this is outstanding. Inspired me to go out this weekend looking for something to make out of a nerf gun!

Question for Welder or Gunsmith - modding a real gun