I picked up another historic lighter off eBay apparently (previous one is the Walter K. Whigham wedding gift Touch Tip lighter from Ronson with engraved names on it; that guy had a record breaking steam engine named after him in Britain and worked for the Electric Board during WWII and got married in 1943 as it's written on the lighter; it's pictured several pages back in this thread).

This lighter appears to be the one given to Lt. Dean "Diz" Laird from the VF-171 Squadron (Squadron was named that between August 11th 1948 and March 15th, 1958). In any case, Commander Laird is a living legend (the only WWII Ace to shoot down both German and Japanese planes). The lighter itself wasn't used in a movie, but Mr. Laird did fly planes and bombers in 20th Century Fox's movie Tora! Tora! Tora! He was stationed at Miramar in 1969 (aka "Top Gun" Naval Aviator school). Unless he died very recently (I couldn't find any evidence of that online), he's still living and is now 99 years old I don't know how it is that this lighter came up for sale.

These articles were written 2 years ago and was flying a plane at 97 years old:

An Ace in the Hole: "Diz" Laird

U.S. Navy Commander Dean “Diz” Laird went from shooting down Japanese airplanes to flying replicas of them over Pearl Harbor At a luncheon of the

Here's a picture of the Dunhill Rollalite Table Lighter in question I've since cleaned and installed a new wick and packing. It's working fine now, although it's missing the little spring that helps you move the lid up/down and props it up while it's open. It opens and closes just fine without it, though. After a cleaning, it looks quite good again inside and out. Somehow I think if history buffs had any idea this lighter was for sale, I wouldn't have been able to touch it for the price I paid for it (ridiculously low even for a Dunhill Rollalite of the era, IMO). Here I picked this up with a friend of mine in mind who still smokes and likes Dunhill lighters and has offered to buy my other Dunhill Rollalite desktop lighter (that one is near mint again after cleaning and a new wick and packing also and is pictured a few posts up) a few times. I think I have to hold onto it now. This is clearly museum level stuff. 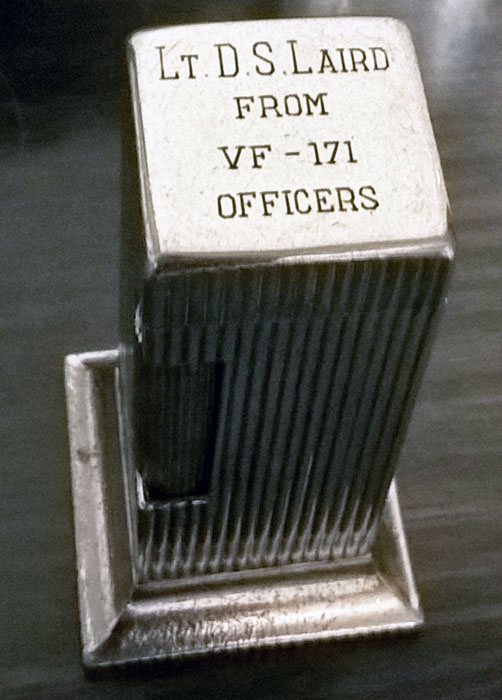 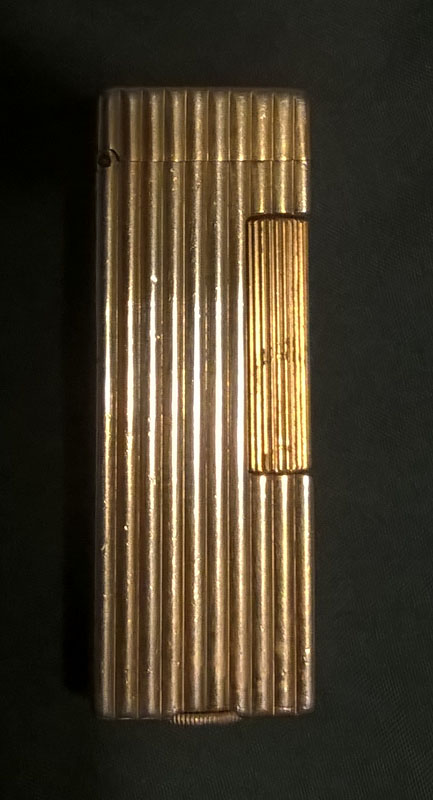 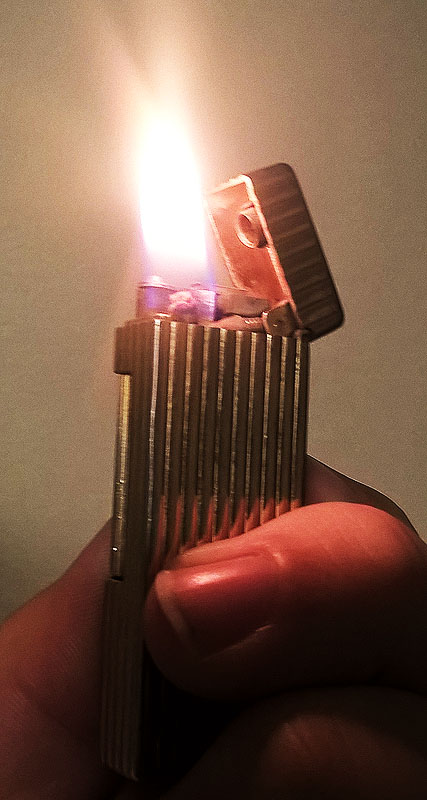 I bought two more Colibri Molectric 88 lighters (Silver dual stripe and Chrome stripe). It's the same brand/model from The Man With The Golden Gun, but different color/textures. Both are fully serviced and working. The chrome one is slightly shorter (different year?) Hmmm, looking closer, the shorter chrome one (right below) says "Molectric" on the bottom while the silver one says "Molectric 88" on the bottom. I guess that makes the chrome one a slightly different model (looks the same inside; it's just a bit smaller). Looking in the inside lid, it does say "Molectric 88" there so I can only assume it's a different year.

1945-54 Era Ronson Touch Tip Lighter added (similar to the one in the Maltese Falcon, but newer and a plain Tortoise Octet). I wanted one I could actually use without possibly damaging the value of my Maltese Falcon or WWII Wedding Gift one. Ronson Repair tuned it up and fixed the solder joint on the flint tube for me and it's like new again (outside already in excellent condition). 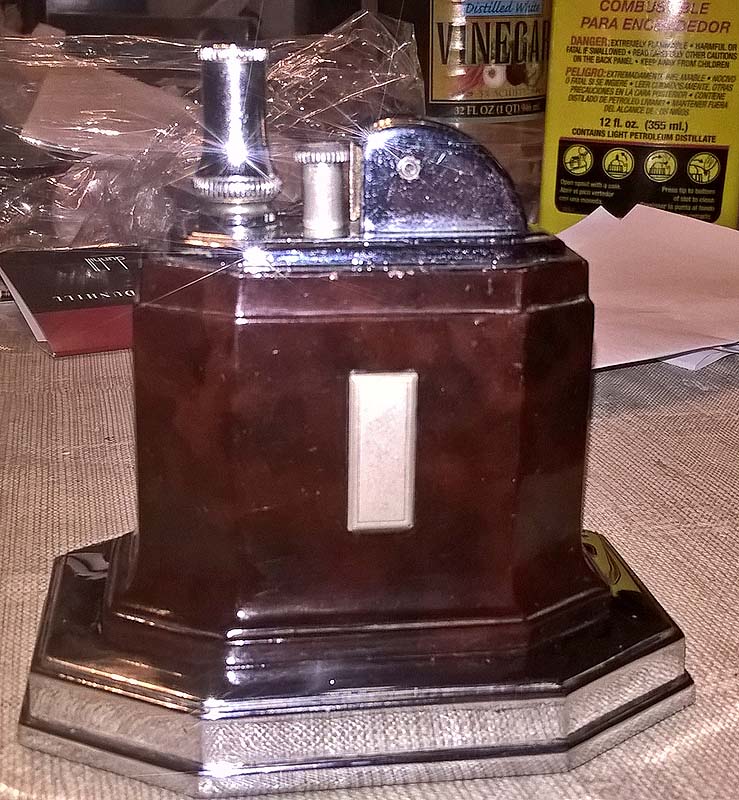 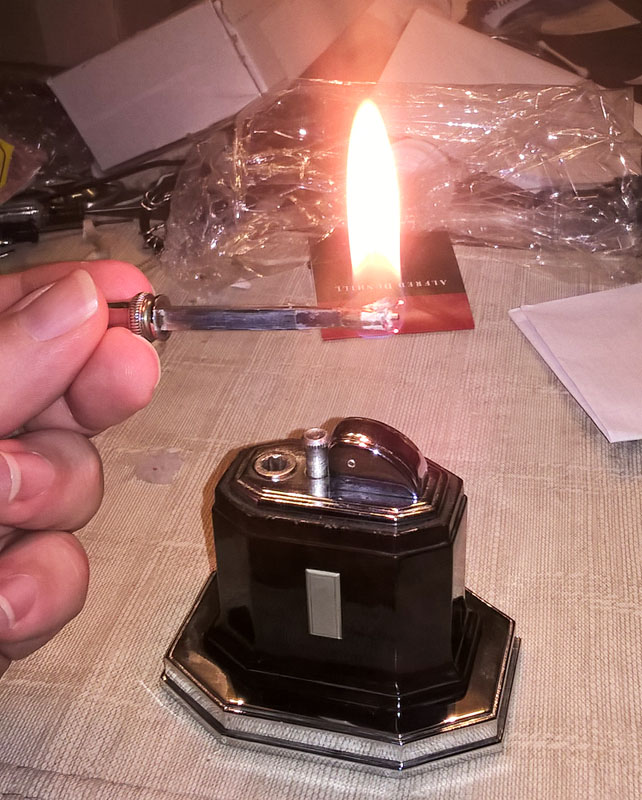 Yet Another Dunhill.... (Silver Rollagas with Tartan Texture) 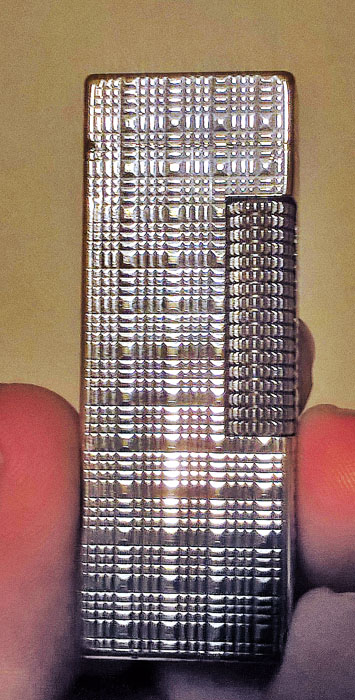 "Toht Hanger" (the coat hanger Toht used in Raiders of the Lost Ark that Marion thought was some kind of nunchaku-like torture device in a comic relief moment) has been added to my Home Theater room. 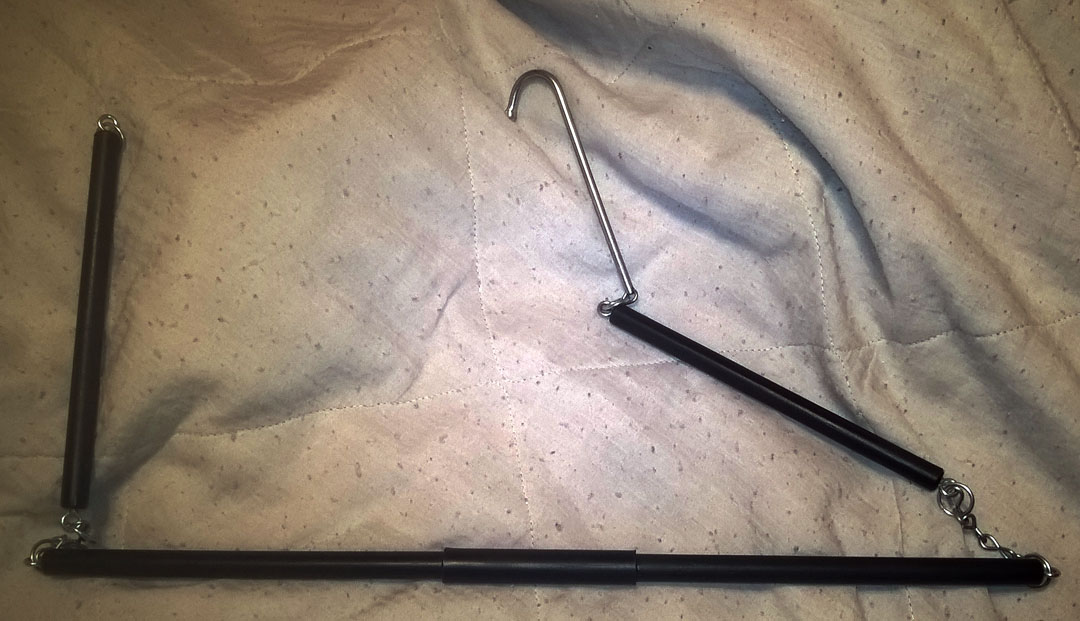 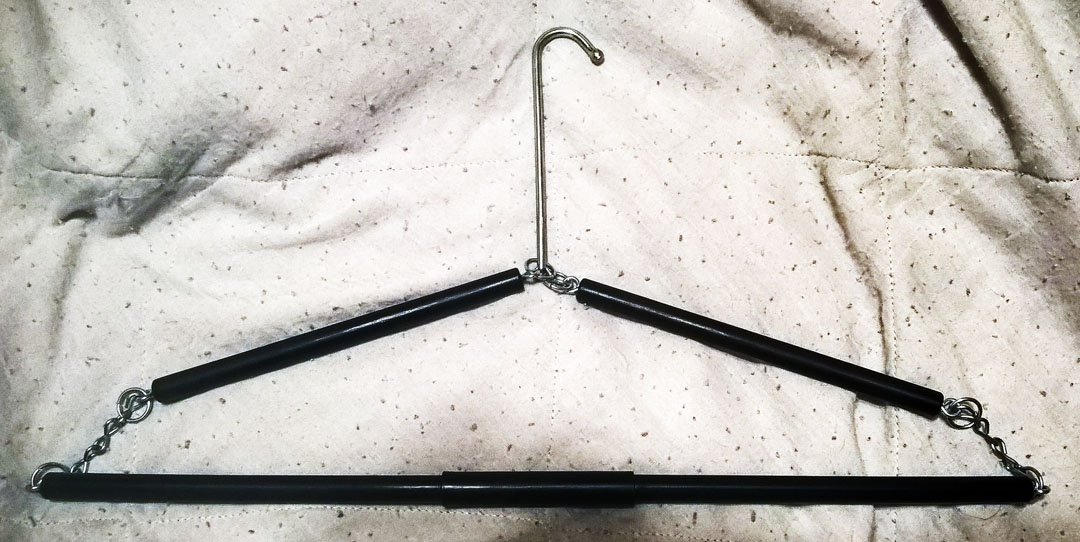 Added the Flashlight from Indiana Jones and the Kingdom of the Crystal Skull ("inked" instead of painted to match the basic altered design of the original Tiger-Head/United Pacific flashlight design. The first image is a snapshot reduced to the size of the movie snapshot in the 2nd picture followed by two larger closeups.

RPF PREMIUM MEMBER
Looks pretty good, especially at low resolution, but I think it'd look better painted. Trick is of course getting the masking to work right with those ridges. I'm probably picking up an LED version and will give it a shot one of these days

mrwax said:
Looks pretty good, especially at low resolution, but I think it'd look better painted. Trick is of course getting the masking to work right with those ridges. I'm probably picking up an LED version and will give it a shot one of these days
Click to expand...

That's with a big flash reflection on it. It looks more natural in regular lighting. 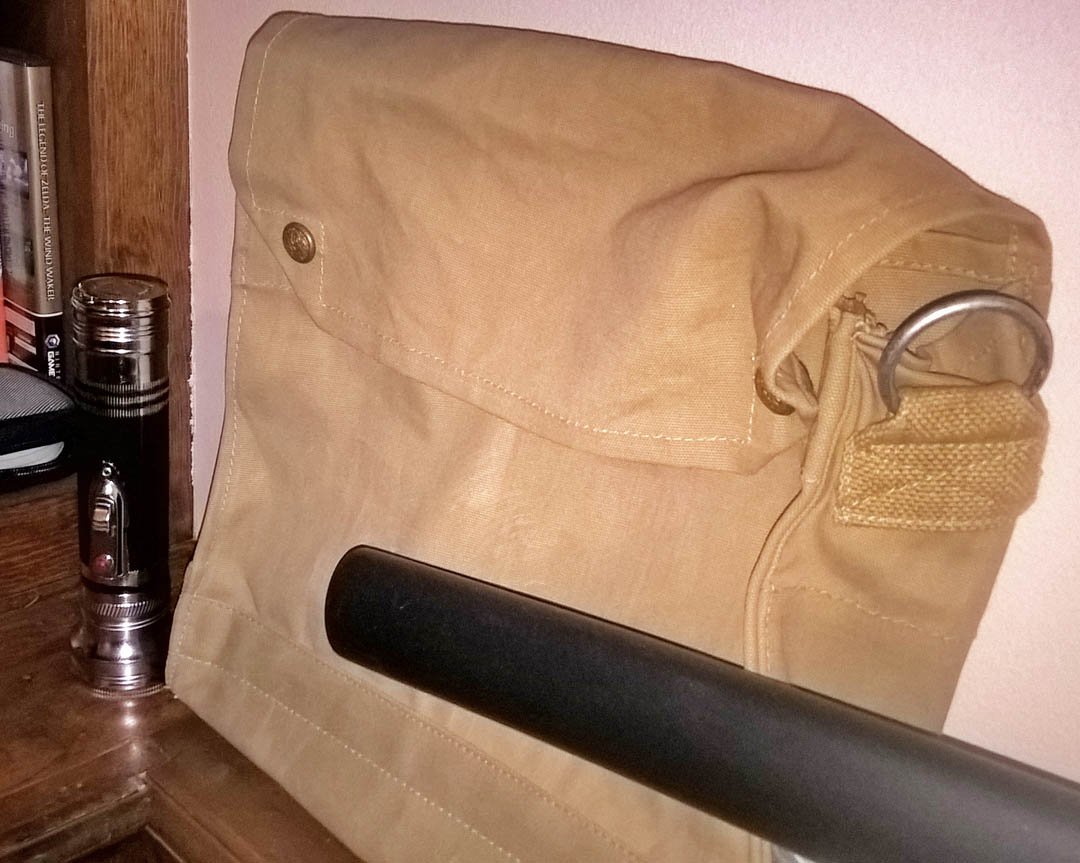 I managed to find a place for it on my bookshelf display, after all:

RPF PREMIUM MEMBER
Oh yeah, that looks much better than with the flash. Hard to get any easier than that, nice option.

mrwax said:
Oh yeah, that looks much better than with the flash. Hard to get any easier than that, nice option.
Click to expand...

I was trying to demonstrate the odd lighting effect on the ribbed surface with the flash as shown in some of the movie frames. If you step through the whole scene, the whole way the flashlight is lit changes as the room lighting and angle of the flashlight to the camera changes. I'm still not sure if they painted a white stripe or it's just the way the set lighting reflects off the chrome, but for a $9 flashlight, I thought I'd give it a go. It only took maybe 90 minutes to do. I'm sure with a bit of masking or a steadier hand, it could be done even better by hand (whether a marker or paint pen). But the great thing about marker is that you can scrape it even with a fingernail afterward to even it back out again and/or reapply that bit. Paint is a bit harder to cleanly remove a section without messing up another bit. But for $9, you can try more than one method without breaking the bank. 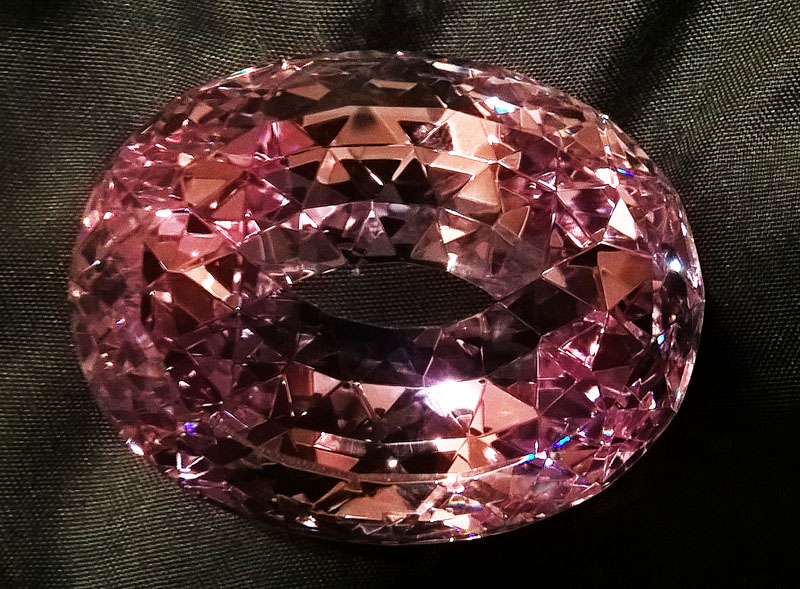 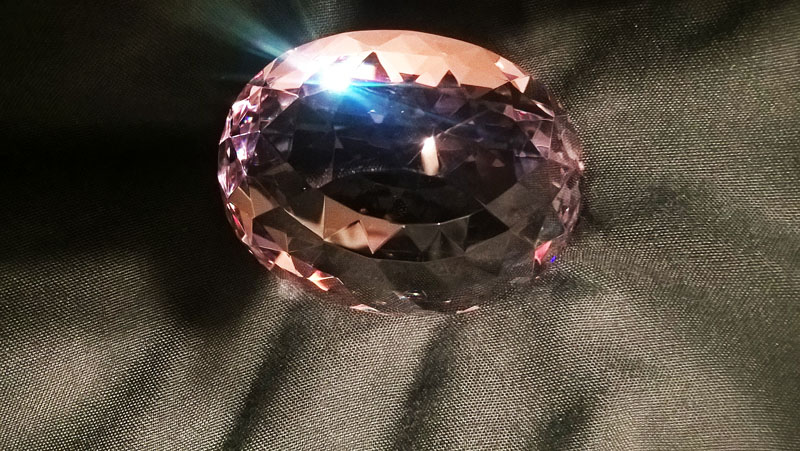 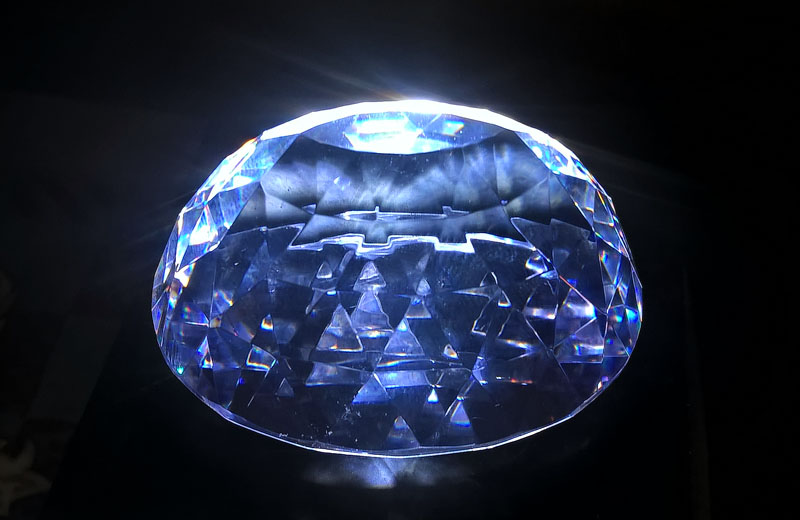 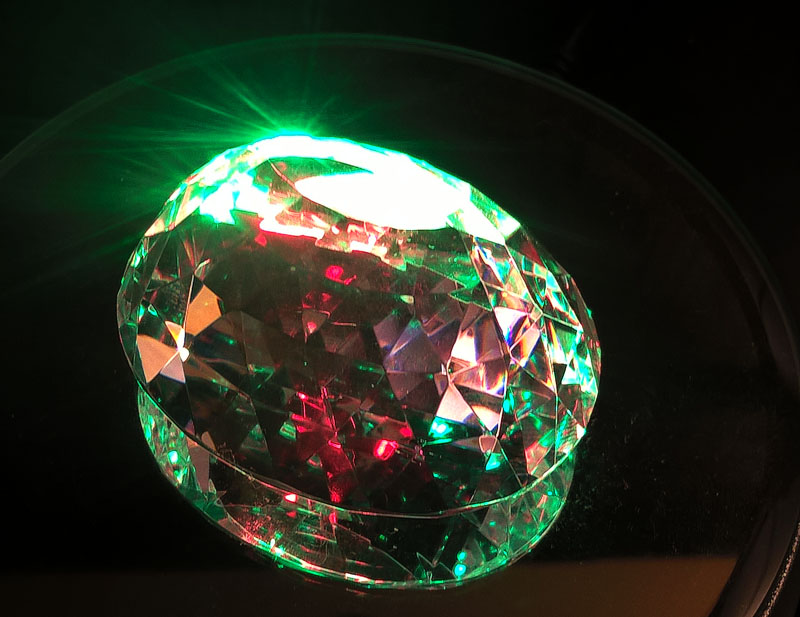 A recreation of the crate the Germans put the Ark in to transport it (that later got burned by the Ark itself) by Peter74 has arrived. I wanted to put it under the Ark in the back of the room to elevate it, but it's too wide for the ledge. I ended up putting it under the bookcase display next to my new magnifying glass/stand that looks very close to the one in Indiana Jones and the Last Crusade on Professor Jones' desk in his office (hat/whip to the left of that hanging on the wall and Indy's jacket and Toht's nunchaku style coat hanger underneath and bookshelf display above). I took a test photo with the Ark sitting on top of it as well, but that would leave an empty spot in the back of the room to fill (maybe later if I can think of something good enough to display there front and center).

Overview of Area (to the left of the 92" projection screen for the home theater): 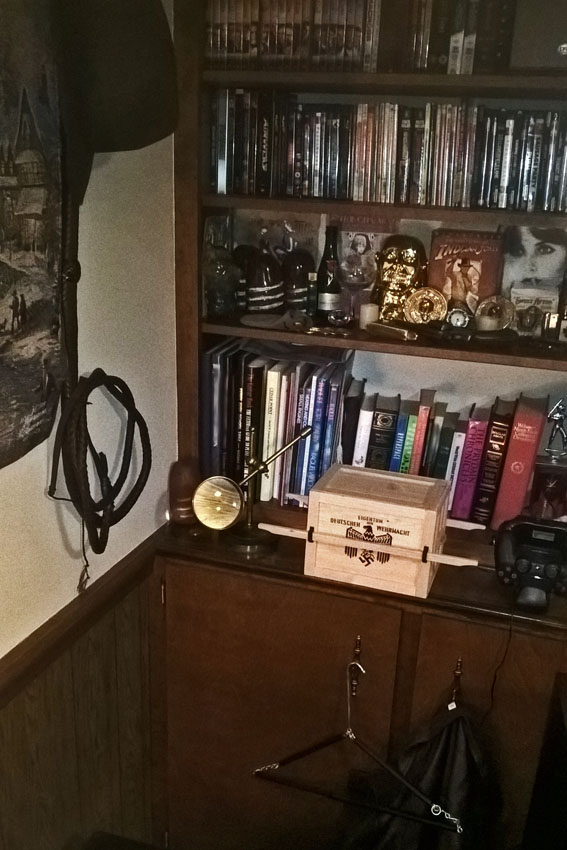 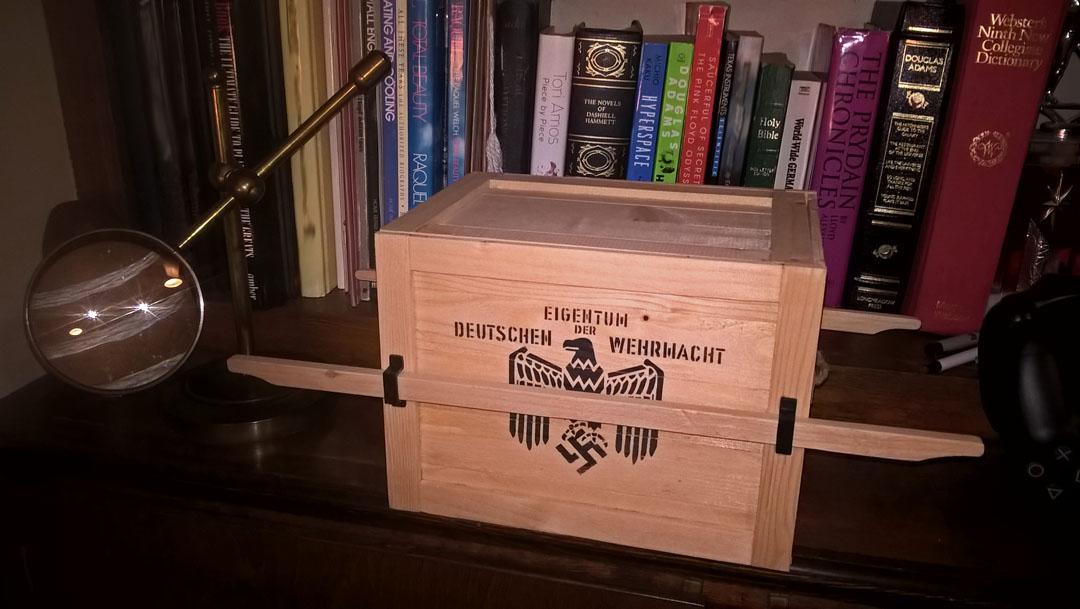 Test Photo with the Ark sitting on top: 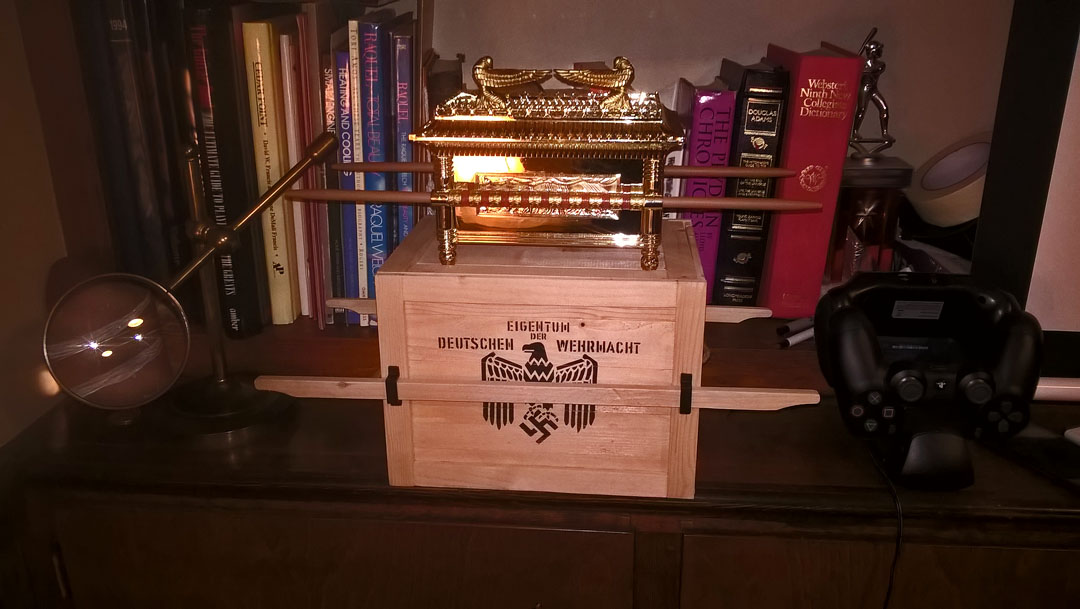 RPF PREMIUM MEMBER
OHHHH !! I have that ark. Now I have to make a crate for it too.

3 Spanish Doubloons replicas added from Etsy matching a 1700s shipwreck off the coast of Florida (thinking Pirates of the Caribbean here). I put them where the magnifying lens can enlarge them.

Received Belloq's breastplate (Sarednab version) and mounted it where the Cross of Coronado was mounted using 18k gold plated stainless steel necklace chains and moved the Cross to the other side of the Raiders of the Lost Ark poster. 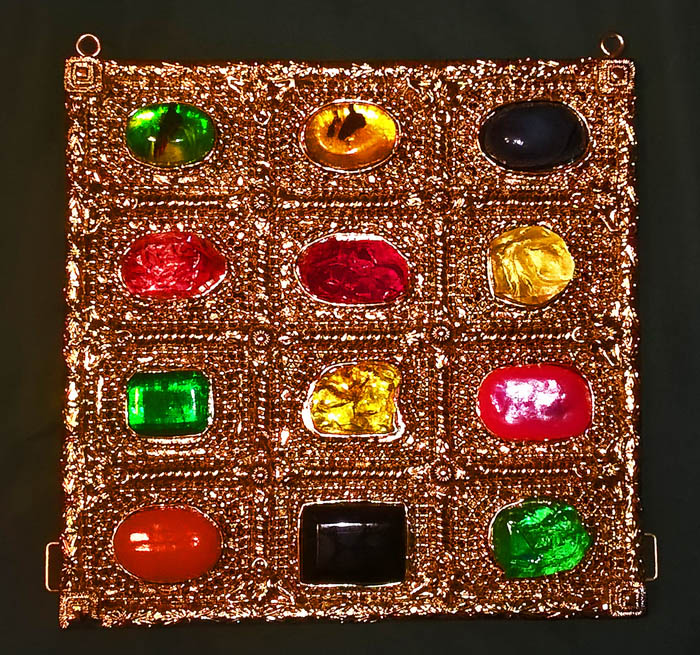 Verner's Compass made by C-E in 1918 for UN Engineer Corps purchased that matches the same style compass that was used but cut from Raiders of the Lost Ark, but was featured in The Young Indiana Jones chronicles has been added to my bookshelf Indiana Jones display. 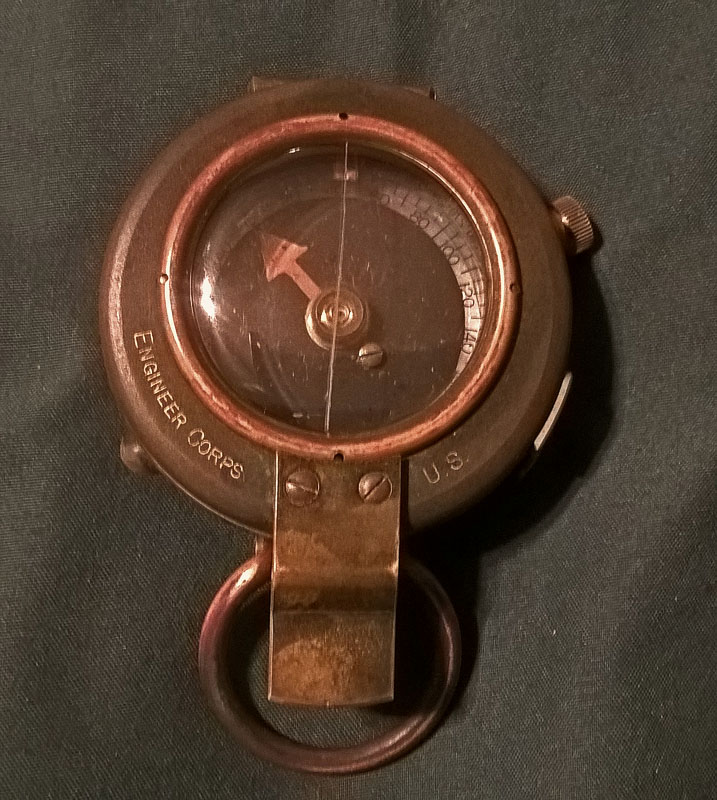 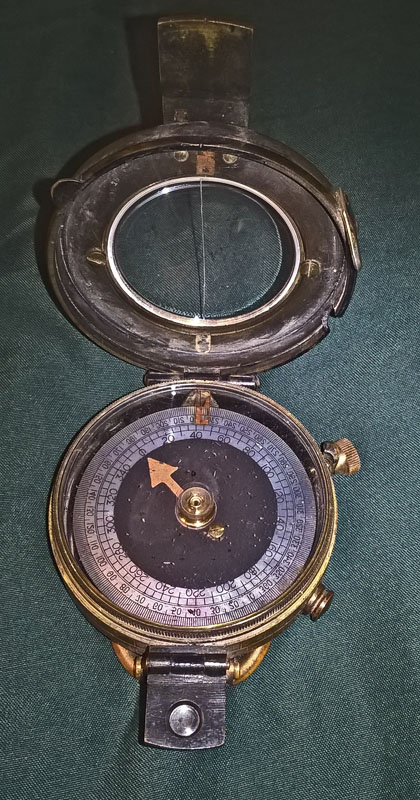 Rearranged the poster setup for Indiana Jones with new Holy Grail "drinking cup" based theme so I could move the ark to do some lighting by the bookcase: 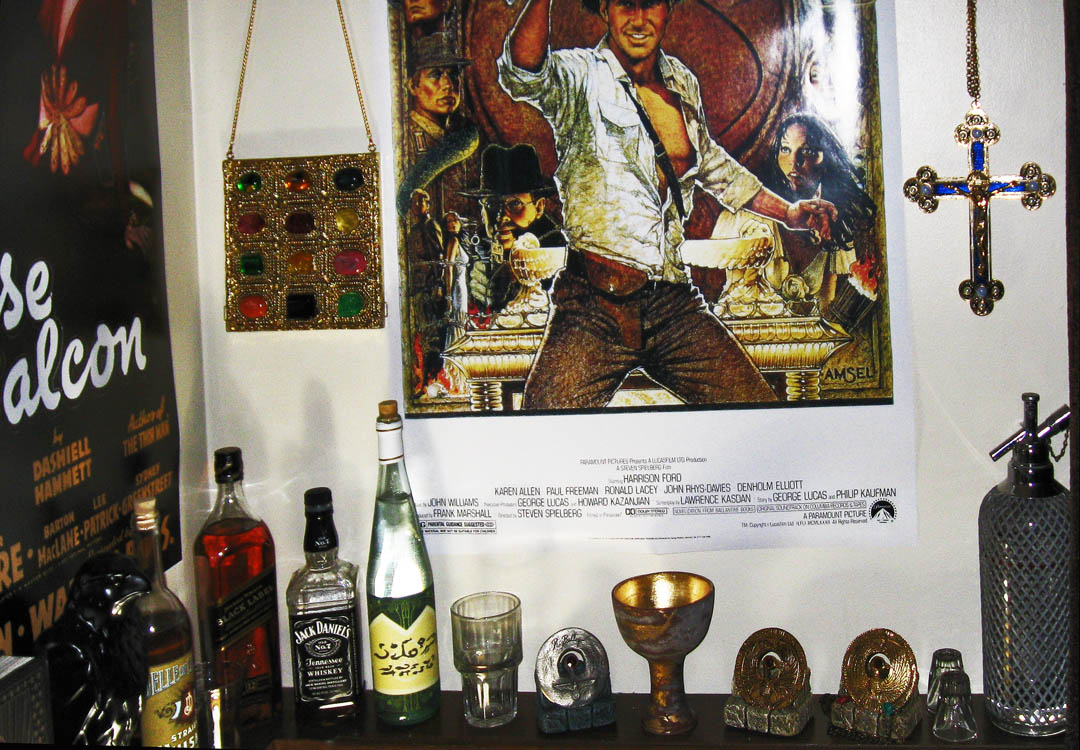 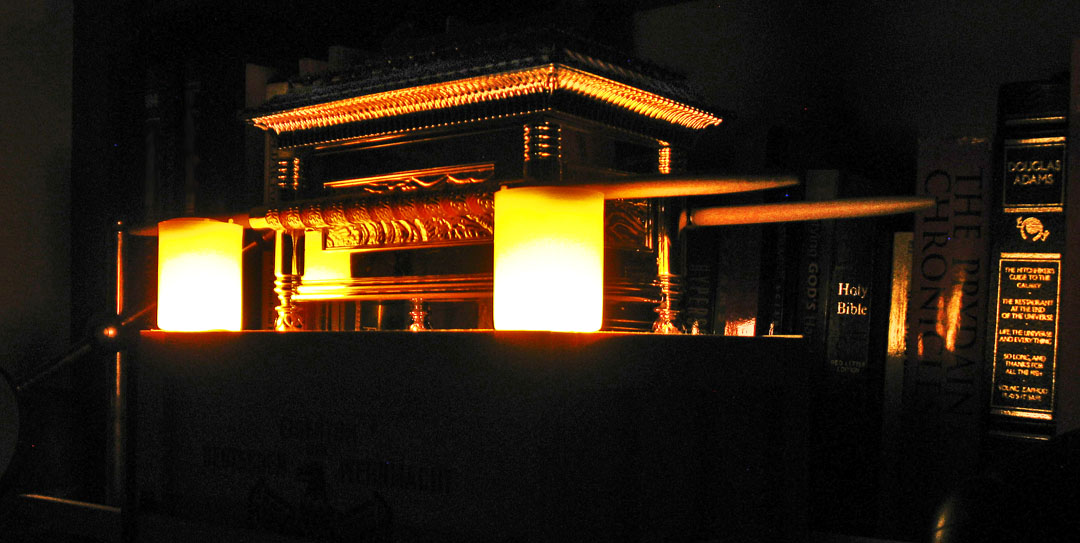 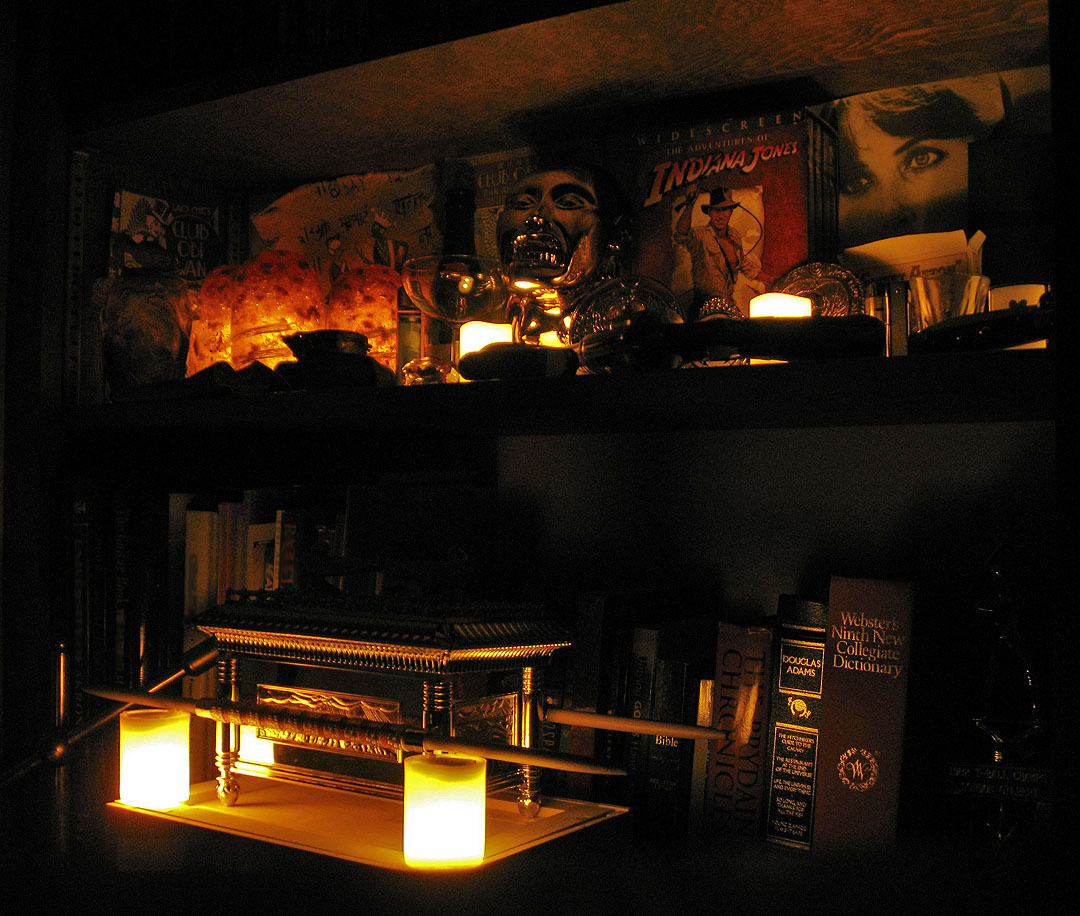 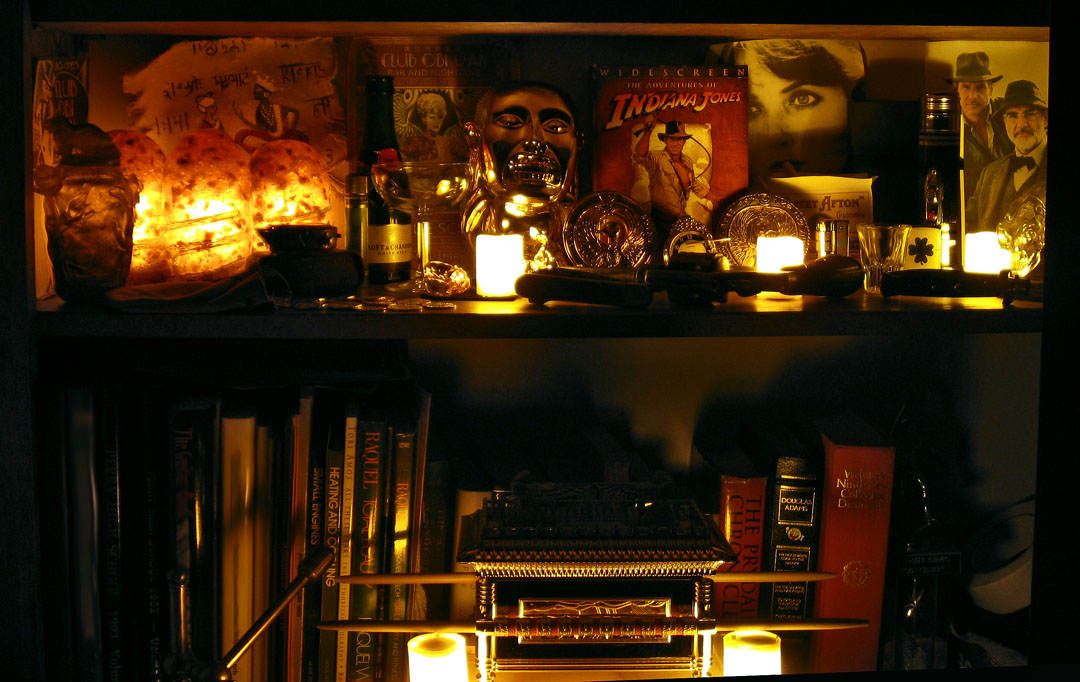