Greetings Yautja friends ! I bought Jir'Xar a BIO HELMET and will receive it very soon. I will also take pictures with the bio, the only things will be to do holes in the helmet for my eyes to see throught it. I will also need to install the tri-lasers i have at home, that i bought last year. My Plasma cannon is a bit too heavy thought so I will need a 3D printed plasma cannon that i found on Etsy. I have to also put 4 earth magnets (big ones) in order for my BIO to stay put on my mask.

Thanks and stay Tuned ..

Shogun said:
Greetings Yautja friends ! I bought Jir'Xar a BIO HELMET and will receive it very soon. I will also take pictures with the bio, the only things will be to do holes in the helmet for my eyes to see throught it. I will also need to install the tri-lasers i have at home, that i bought last year. My Plasma cannon is a bit too heavy thought so I will need a 3D printed plasma cannon that i found on Etsy. I have to also put 4 earth magnets (big ones) in order for my BIO to stay put on my mask.

Thanks and stay Tuned ..

Can't wait to see it

lazybones88 thanks ...will update with photos very soon

Hey shogun, I've been reading and watching the story behind your yautja, Jir'Xar. Very cool back story I like it a lot. I find it very interesting. Something I want to do with my HUNTER'S story, THE TEXAS PREDATOR. Hope you bring us more insight in everything that is Jir'Xar. happy hunting fellow hunter.

His name is Jir'Xar, he is a Sea Hunter and Elder of 632 years old. He his on the human side of the history, he learned our languages very fluently and our cultures. He was not a cast away from his home-world , he decided alone to hunt and defend Earth from different intruders. Jir'Xar is like a monk, he loves to pray in Earth ancient temples and has many sanctuaries where humans can find him. When humans gain his honor and respect, they usually get items or sacred knowledge from Jir'Xar.

One day Jir'Xar was praying in one of the Shaolin temples in Himalaya mountains. The sun was rising and the little mist of the morning was bluring the scenery. Jir'Xar took a deep breath and after all those years on earth, he managed to get along without the azote in the air. His lungs were getting used to the Earth atmosphere and his eyes view was becoming more human than thermic. As he left the temple, Jir'Xar took his old wooden spear that he made 200 years ago when arriving on Earth and went trought the mountains canyon, he arrived at his main sanctuary which was a Scout Predator Spaceship ravaged and rusty. The thing is, that spaceship was crashed since he arrived and Jir'Xar has to find a way to get the special nuclear energy to get it on track again. He knew that in some places on Earth there was other Predator crashed vessels (Referencing to some old movies), but he did not knew where, because his in-spaceship detection device was broken and without energy to work. In USA, the pentagon knew there was a Predator on the himalayan mountains but absolutely no searching team succeeded at finding Jir'Xar. One of the soldiers came trought the briefing room of the Pentagon, General ''Dutch'' and Captain ''Mike Harrigan'', were standing in front of the screen, trying to find a way and rallying a NEW team. Those 2 witness's of the Jungle hunter and City Hunter were determined to find that Sea Hunter, and go on an adventure.... The soldier that entered the briefing room talked to Dutch and Harrigan about what he knew about a fisherman boat in the Indian Sea ''rumor''. That rumor was that the crew of the fishermen boat saw a humanoid creature hunting big sharks near New Delhi's port ..that he was using some sort of spear that was cutting the sharks with precision. Dutch and Harrigan knew at 100% that another Predator was there. They prepared a team of 8 members including them...once arrived in India by airplane Dutch told Harrigan and his crew members ''Get to the choppa, boys!'' with a grinning smile on his face, Harrigan looked back at Dutch with that acknowledgement grinning.
Last edited: Oct 14, 2018

Here I received my Bio helmet from Thailand today...!!!! And I worked about 1 to 2 hours sanding for making the holes. I did paint it as you can see... the silicone is still curing for the lasers to stay on the helmet 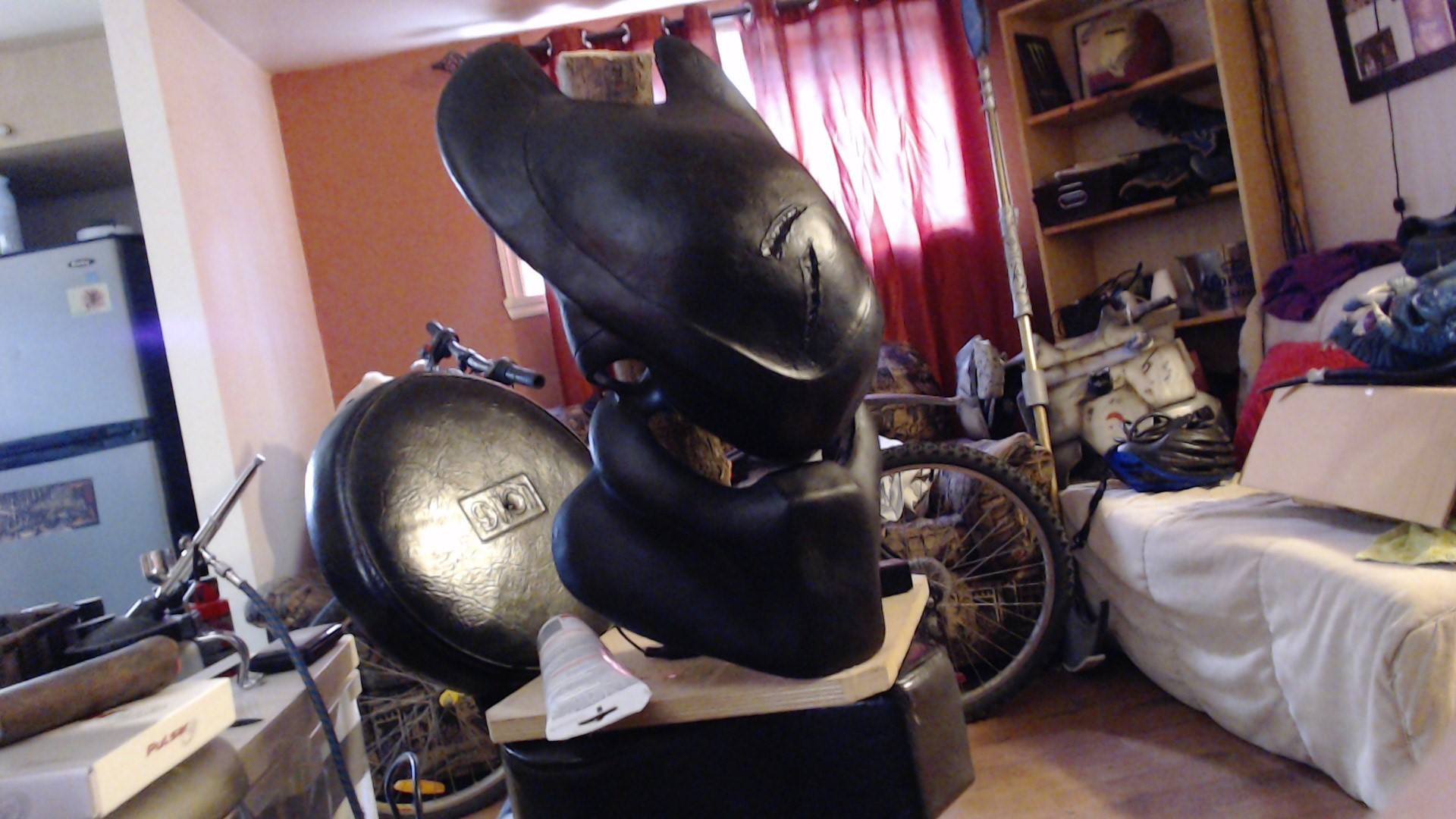 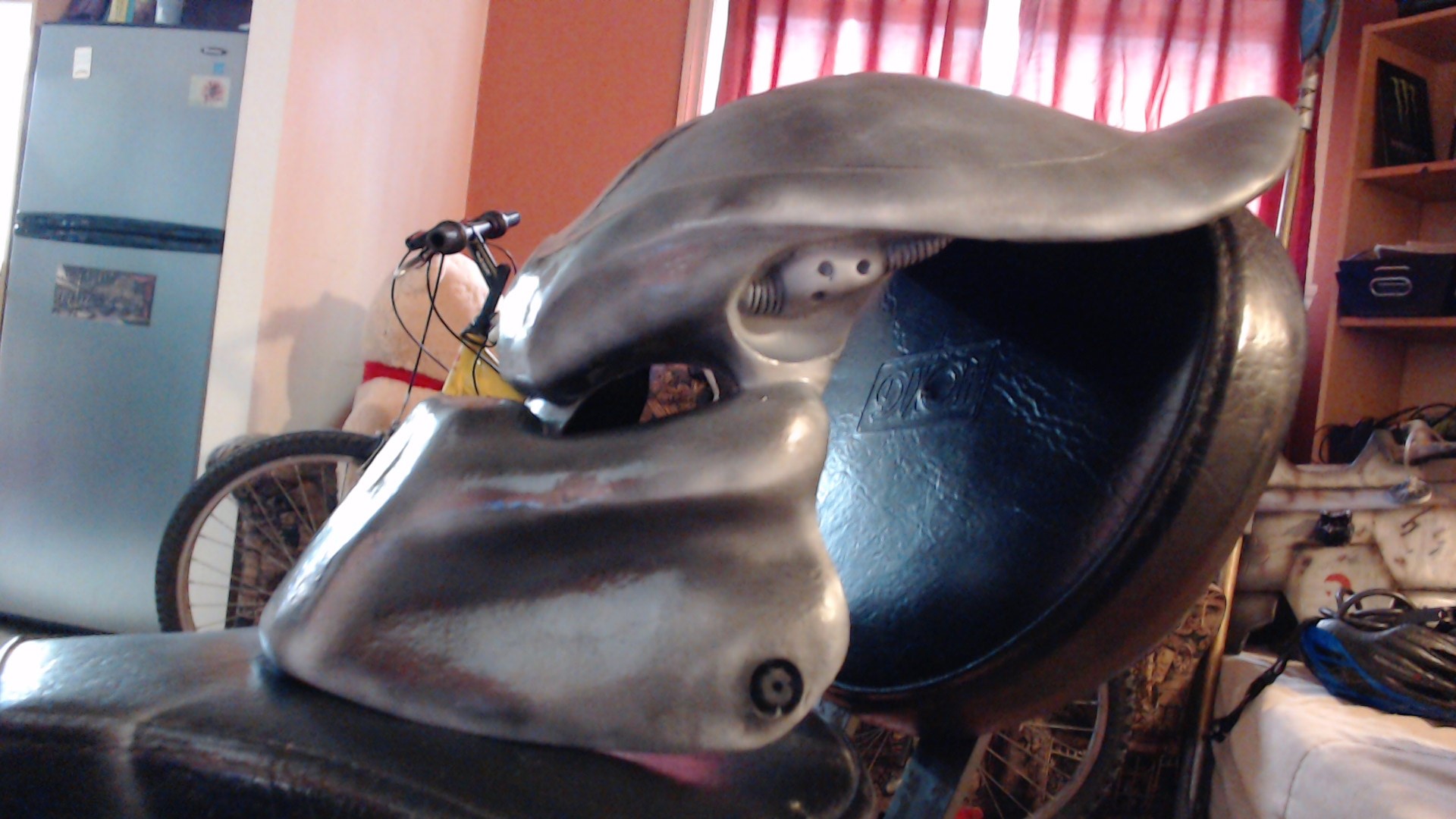 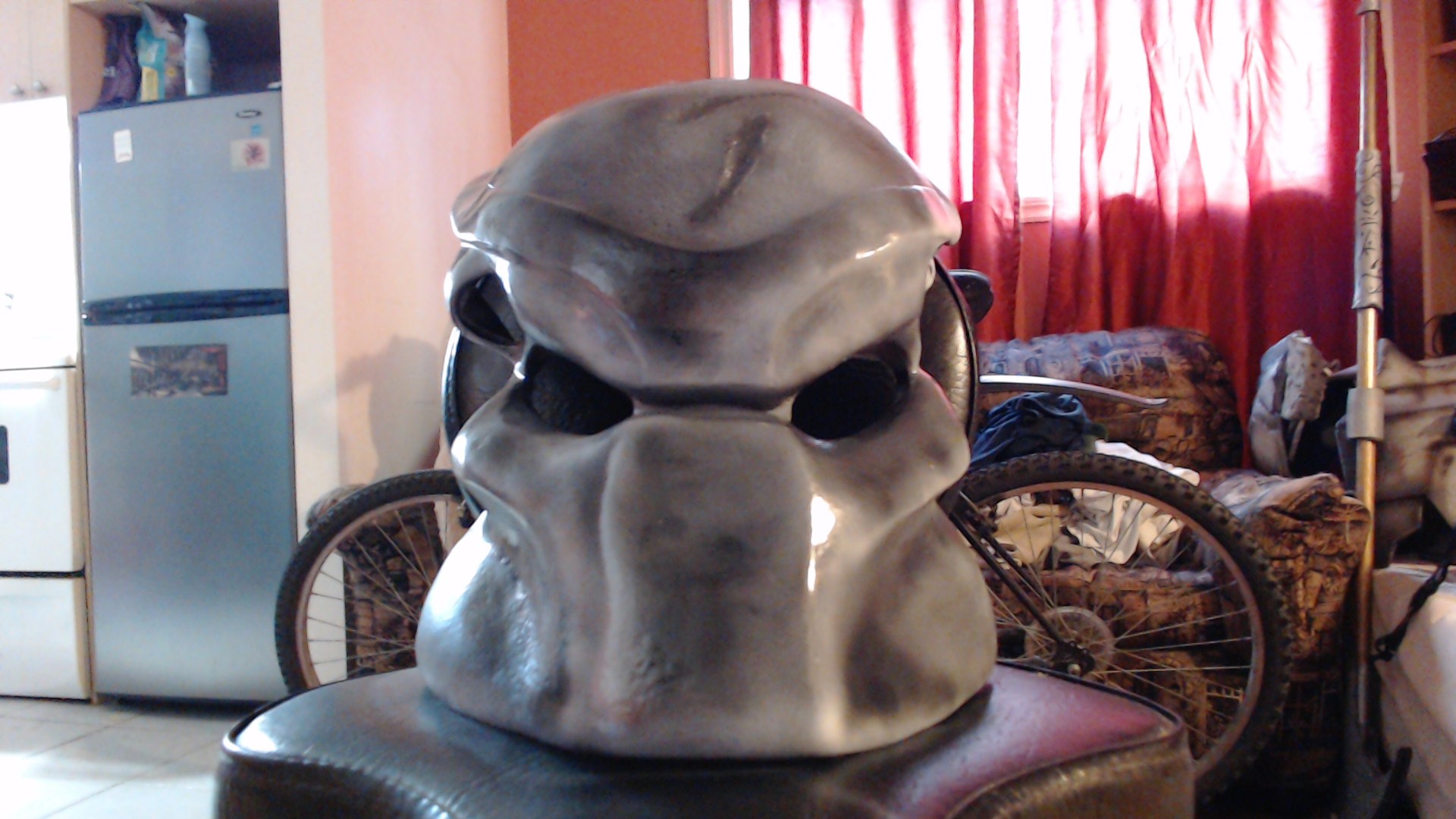 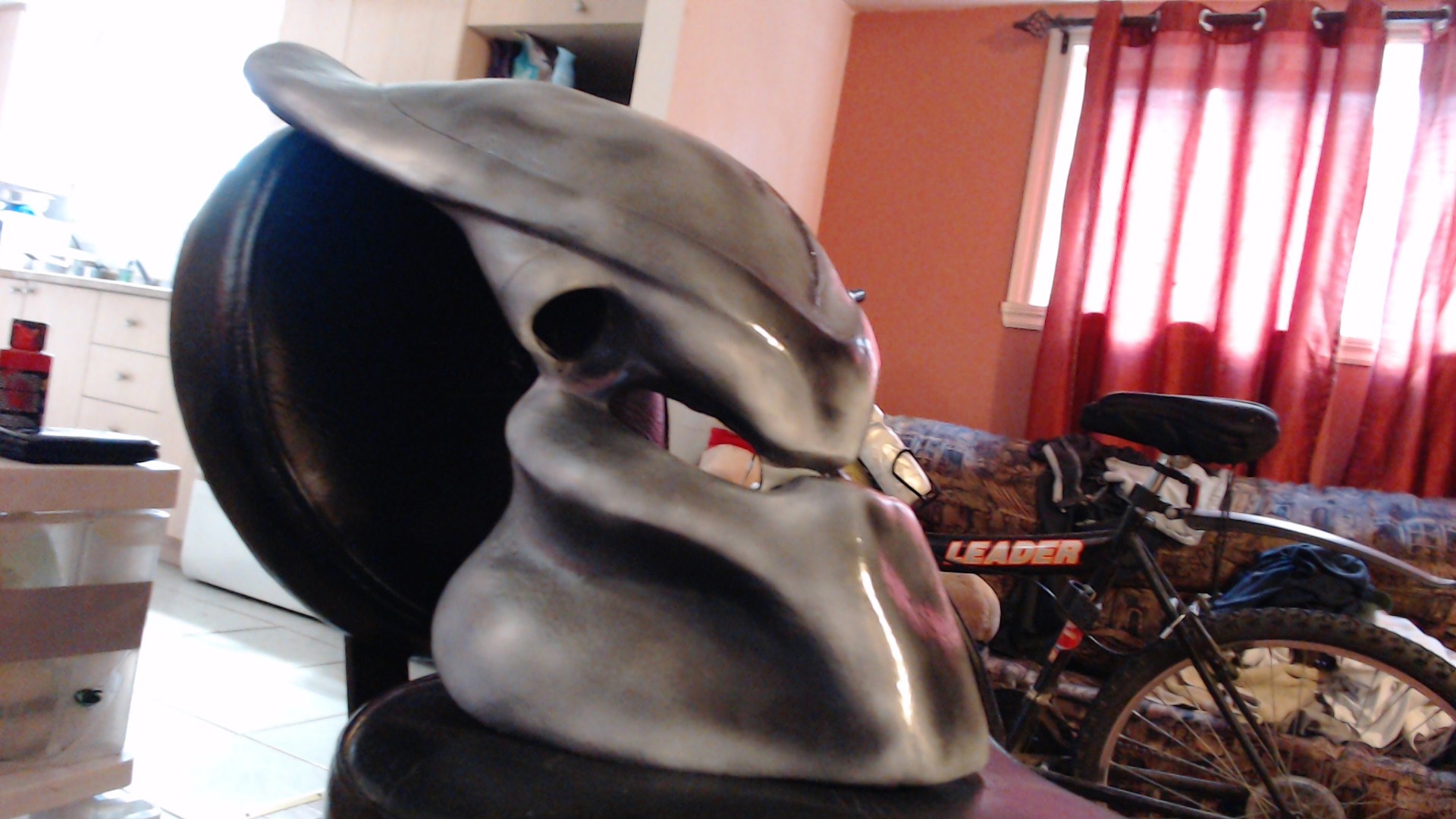 Looking GOOD shogun!! are you gonna test fit it on your blue yautja?? That be AWESOME to see!!

Texas predator IT Works with the mask...will be posting photos really soon...

That's AWESOME shogun!! I also see the ARMOR is the the same color as the bio really excited bout your Jir'Xar suit!!

Texas predatorHere for your pleasure (and mine hehehe) 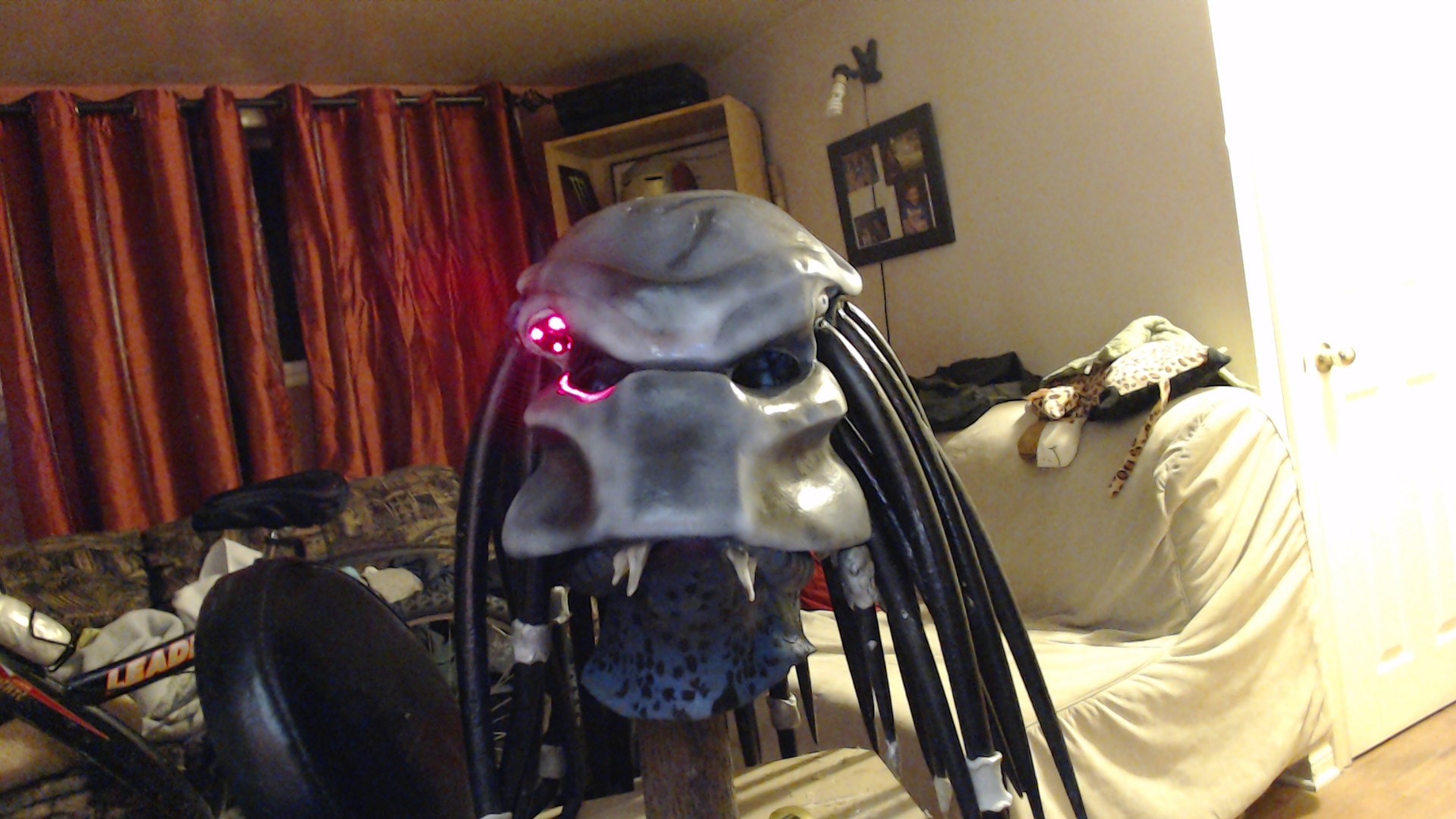 I took a photo with the Bio

Hello Yautja's ! I added some fishtank tubes on my helmet so it looks more realistic a bit.... 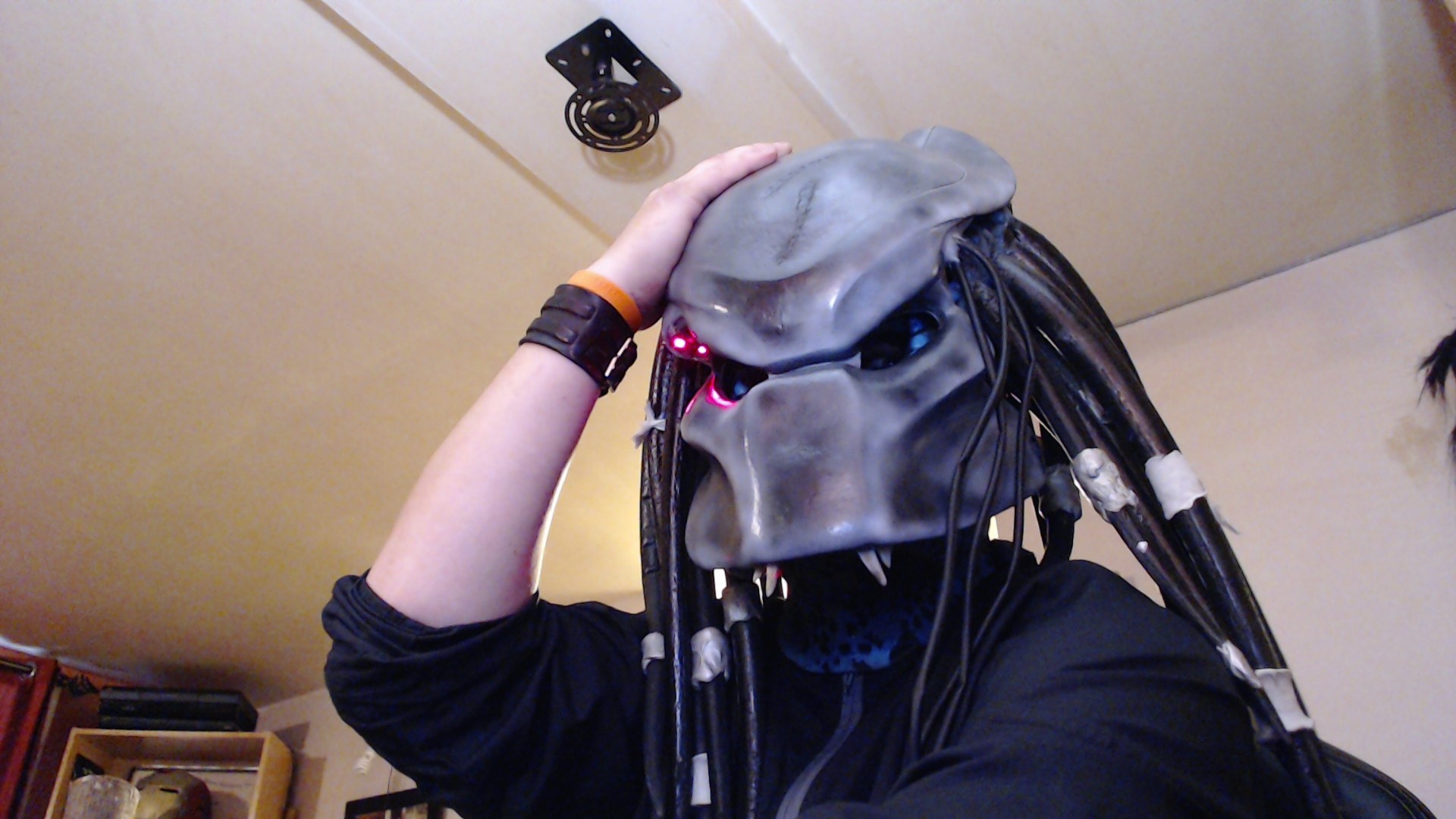 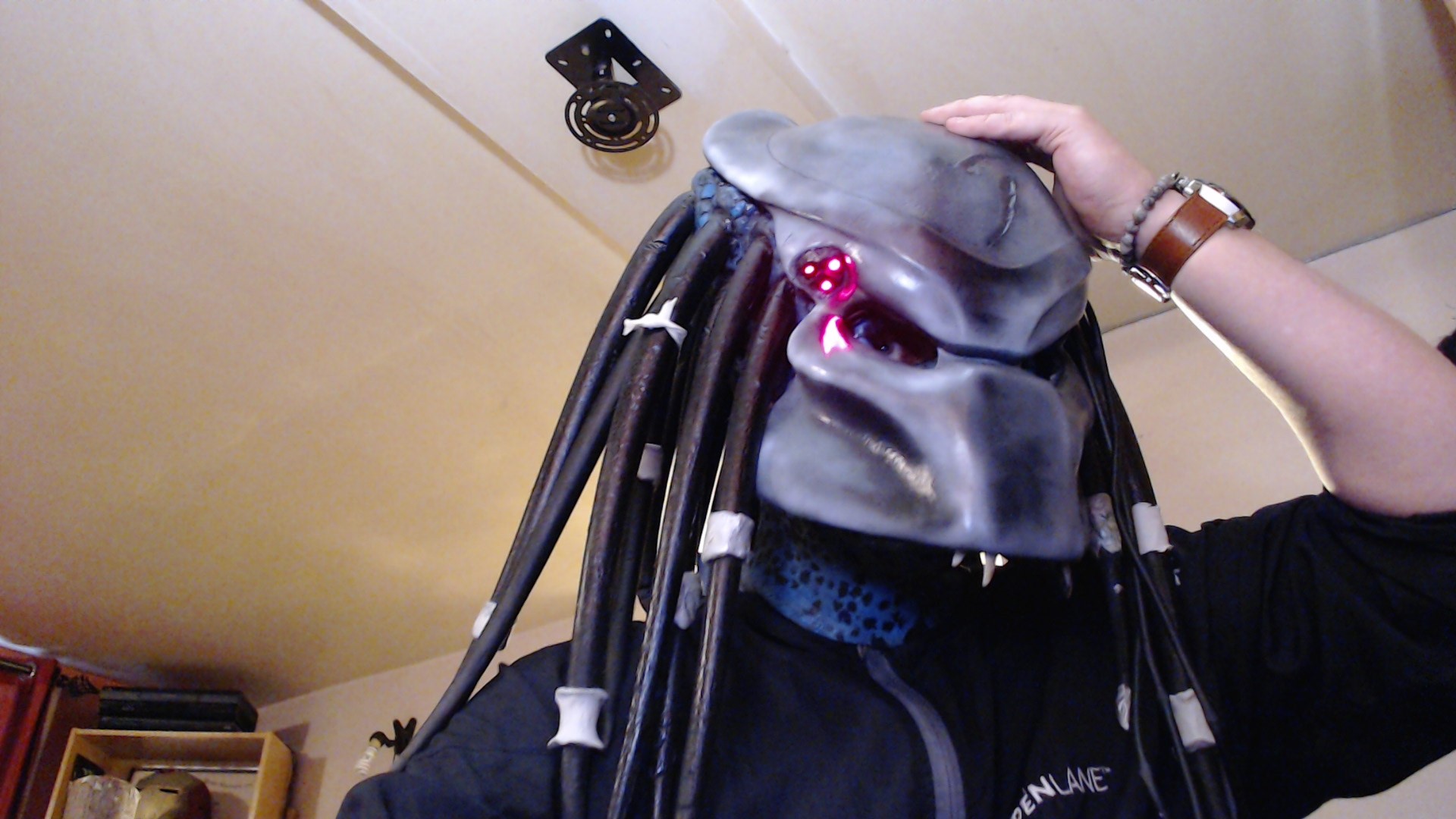 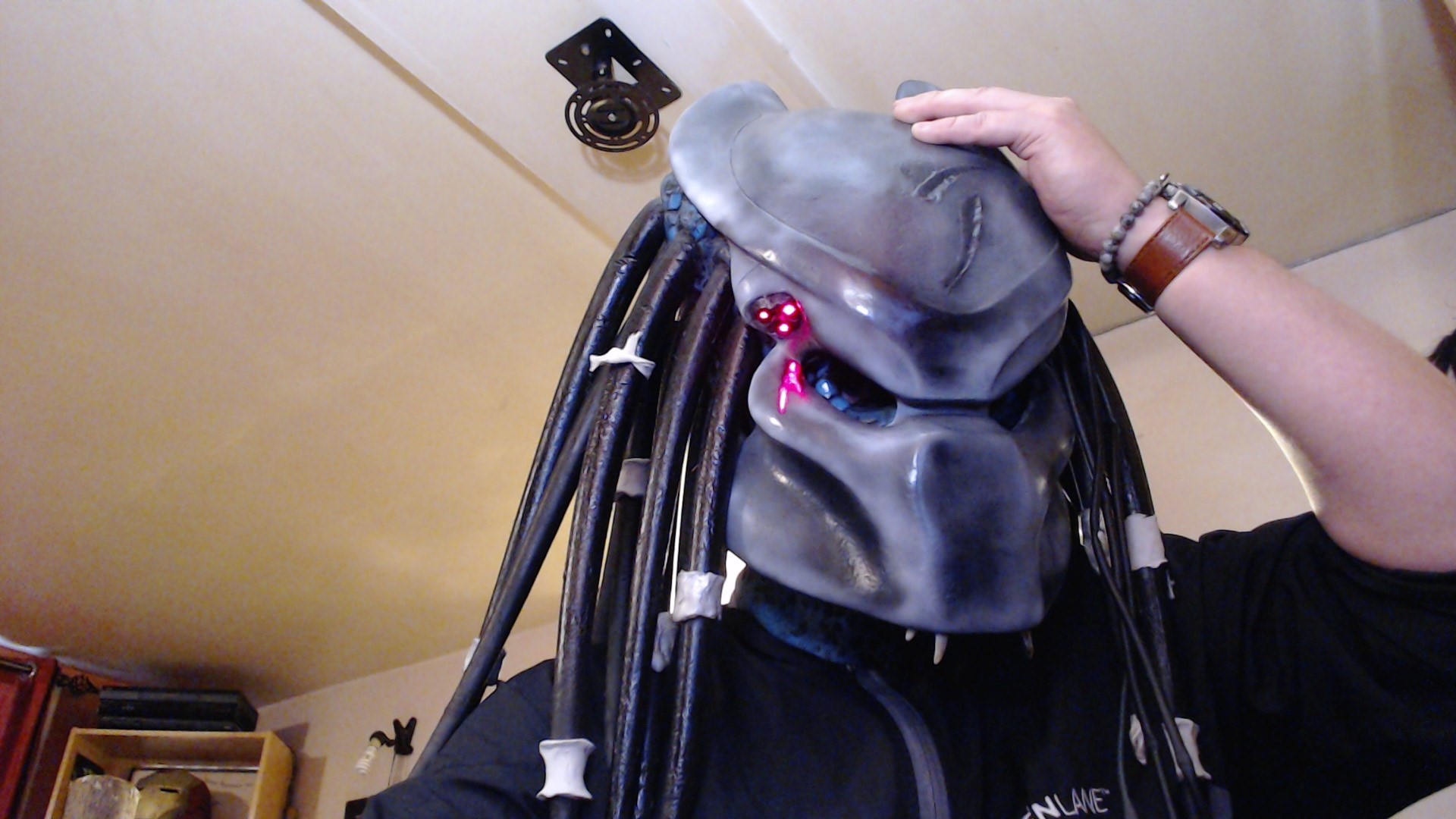 Hey shogun are you gonna upload any YouTube videos on your CHANNEL?? It be cool if we can see some awesome video of your yautja suit!!

Texas predator yes i could but it would take me sooooooo much time to do.....I will LIVE stream thought very soon i guess ....on Twitch

I did put some magnets on the mask and bio so it can stay in place at least the magnets are black so they fit with the color of the mask.... the only problem was that i had to remove one magnet so the glue did remove some paint oh well.... LET STAY POSITIVE! Now all that i wanted is done, i just need to receive my contact lenses until tomorrow and VOILA... I also need to buy 20 more dreads from Termokk and a RAW TORSO and LEGS from Wreav....and some other stuff from Termokk or Wreav... Oh yes I received my STAN WINSTON SCHOOL T-SHIRT today yay! ( AT LEAST THAT WAS the only positive thing in my rainy day ) .... 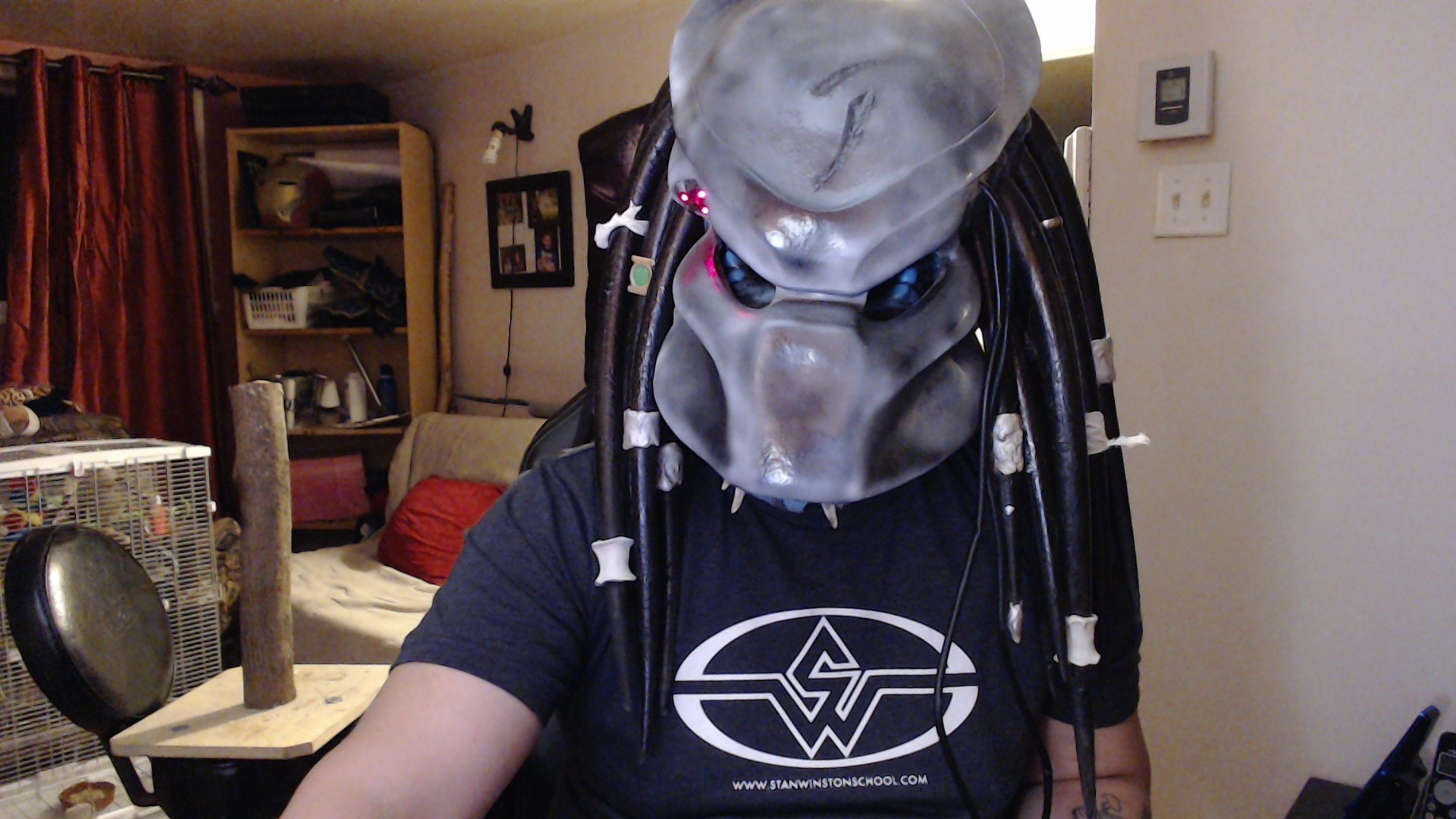 How do you transport your costume pieces