bump19 said:
I am interested in the map, doubloon, and copper bones. I am making a trip to Astoria in December and it would be really cool to have these props with me. Thanks.
Click to expand...

EmmaInCandyland said:
I have met Sean Astin and ke Quan just 3 days ago! Really cool guys! Now I wish I had magnolis map with me, would have been cool to have it signed by them or even for the photoshoot X)
Click to expand...

Was that at Glasgow Braehead for the comic con? Was there myself on the Sunday.

Howlrunner said:
Was that at Glasgow Braehead for the comic con? Was there myself on the Sunday.
Click to expand...

I was there on Sunday too x)
C

Interested in a map and other props if your are still making them. Please let me know
W

PM me the prices for your Goonies treasures please & thanks

Cascadian said:
Interested in a map and other props if your are still making them. Please let me know
Click to expand...

WozGodGax said:
PM me the prices for your Goonies treasures please & thanks
Click to expand...

Moviefreak said:
Here is his website where you can order

NO...he said to PM him the prices....he doesn't want to search for it! GEEEEZ!

Jedifyfe said:
NO...he said to PM him the prices....he doesn't want to search for it! GEEEEZ!
Click to expand...

I have tried my hand at the map of One Eyed Willy. I have really been inspired by the awesome creations and maps of the members here. Unfortunately I lack the funds to purchase the awesome maps available. So I had to make my own. Mine is more of a stylized version. Possibly that means I erred and could not go back when trying to make the hero version and also that I made it to my liking. I decided to make mine out of real parchment made from animal skin. A word to those who instead of paper try the same route, when trying to singe or burn the edges paper will color nicely, parchment will curl like bacon because of the collagen retracting. The collagen acts just like the fat and because of the uneven heat source it will shrink and start to render while the other fibers do not resulting in crispy wavy bacon edges. Thank goodness I tried on a trimmed off piece first! I had a limited supply of parchment so whatever errors I made I was stuck with. I still need to add a jute, hemp, or leather thong to close it with (I haven't decided which yet).

I had the worst time trying to read all the writing on the hero map from screen captures. I saw that our members here either tried to replicate the shape of the words but they are just as illegible, or they substituted for their own. Because I could not find the text anywhere to help me when I started I have included it here for others as well as my own text in place of the illegible in my stylized version. Also my Spanish and Latin need work.

Mikey: "North. What's north? Which way is north?"
Data: checks his compass. "North is that way"
Mouth: "That's where you'll find the treat."
Mikey: " The treat.. the rich stuff! The treat! The rich stuff. That's it!"

Visible on the Hero map is:

Despeñadero = "cliff" on the coast near the x
Also visible are depth soundings numbers showing how deep the water was for navigation purposes because this is a nautical chart showing water courses for sailing. Maps show landforms. There may also be a longitudinal mark.

Everything after that is speculation. I couldn't find any clear shots that definitively show what is written. So I like others before me have given my interpretation or just added my own text.

In the movie Chunk points at the map and says ,"look, look, look. That says 1632. Is that a year or something?" Mouth says, "No, it's your top score on Pole Position." So on my map I included the date: 1632. The screenplay says the map is signed One Eyed Willy so I included his signature as well. The script says One Eye Willy's name is William Pordobel which is a take on Portobelo. Since the map is entirely in Spanish and Latin I changed it to Guillermo Portobelo for the signature.


I included the following Spanish words and phrases:

Silvestre = wild (along the coast)
Indios = Indians (along the coast)
Laguna = Lagoon (where the modern day Jetty Lagoon is off Clatsop Spit
Zozobrar = Capsize (in shallow water)
Niebla = Fog (offshore, Oregon is prone to advection fog)
Adelante peligro Espuma cresta hay = Danger ahead a foam crest (near where the Colombia bar is as part of the sandbars and shoals that make up the Graveyard of the Pacific (foam indicated shallow water over reefs or sandbars for sailors.)
Banco de Arena = sandbar (near the modern Desdemona Sands in the Columbia River.)
Canal Navegable pleamar = channel navigable at flood tide, incoming tide (near the modern safe passage in the Columbia River)
Encallado = aground (in shallow water)
Linea mal de rompientes = Bad line of breakers (in the water)
Affilado = Sharp
El fondeadero es filo del viento a la ensenada = the anchorage is in the eye of the wind to the inlet or cove
Mar gruesa y viento fuerte = high seas and heavy winds
Les lobos marin = the sea wolves
Mar Clausum = Latin for closed sea, the Spanish didn't want anyone else navigating their territorial waters along the Pacific Coast (found on old maps)
Grandes corrientes = strong currents
Costa aterradora = Terrifying coast
Isla de fortuna = Island of fortune
Rumbo al Barlovento = True course is towards the windward
Mar picada = chop (choppy sea)
Cueva = cave (near the x in the cove)

Supposedly there is also a sketch of the old cannonball chamber on the map at least Mouth says as much in the movie. It could refer to the chamber that had the cannonball activated pit trap started by rotating the copper bones as indicated by preproduction drawings for the film or a chamber on Willy's ship the Inferno.
The book also mentions footprints leading from the bottom of the hill to the X, a three rock pattern described on the map, and a spot on the map where the path veers off in three directions (referencing a deleted scene where the Goonies had to tickle a bone for the skeleton to point the right way the others had deadly booby traps one was a grim reaper skeleton pulled rapidly passed with a scythe to decapitate.

I did not include these phrases that I commonly see on versions of this map:

Puerto = A port is a city or town with a harbor. I didn't include it as there are no Spanish ports that far north in 1632. Usually havens such as harbors or ports have manmade jetties, piers, breakwaters, or other artificial structures to help ships weather a storm. 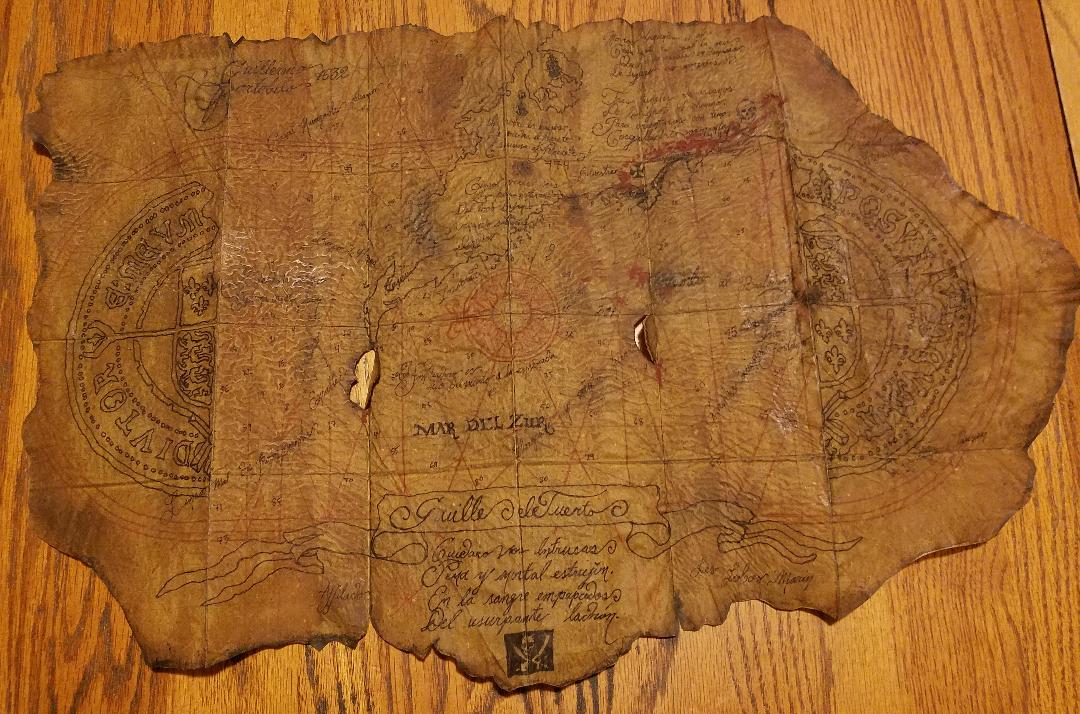 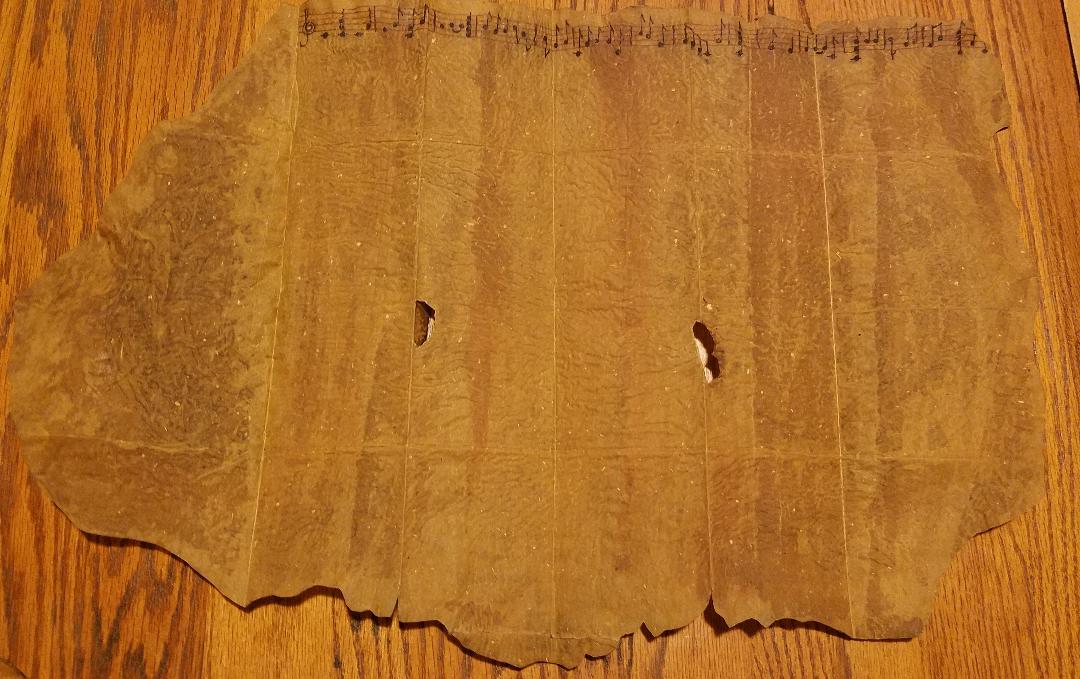 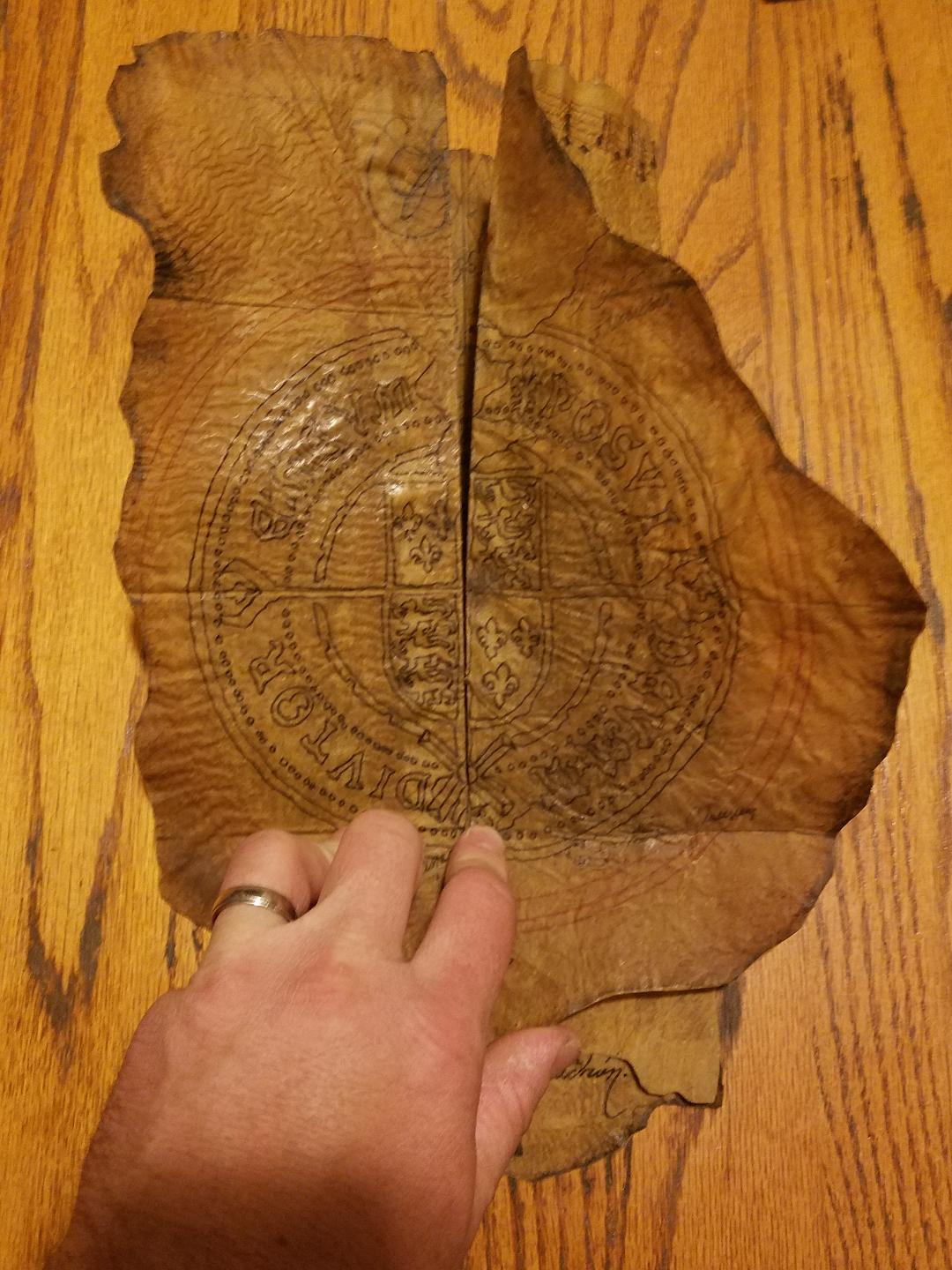 Some map progress pics while I was drawing it.

Hand drawn with my mistakes and all.

Scrap edge test curled like bacon under the flame when I tried to singe the edges. I ended up having to weather the map without heat by dry-brushing it.

I've just sketched my own version of the map. so -as spanish native- let me contribute just a bit to the text 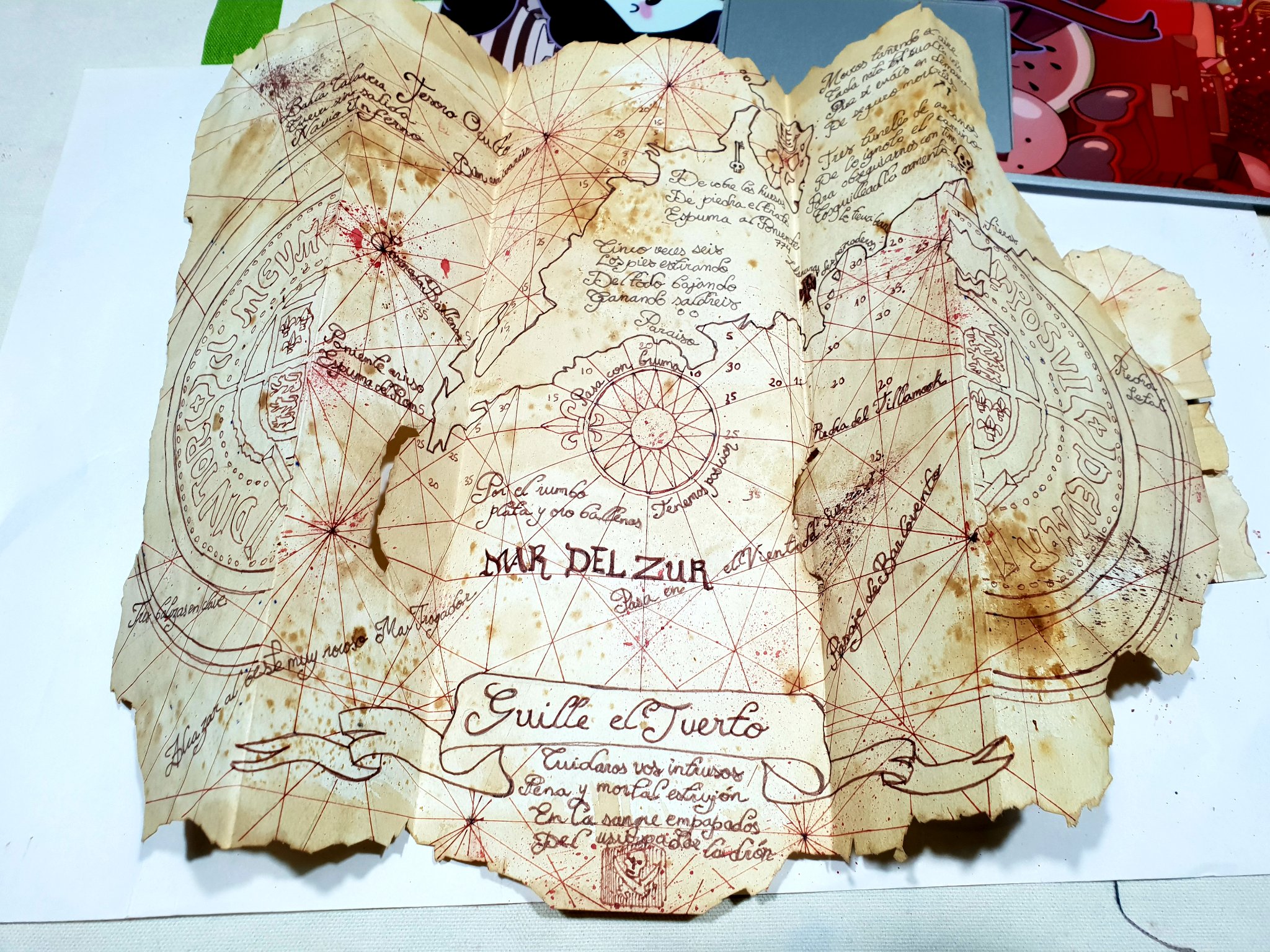 RPF PREMIUM MEMBER
Just made this video showing the process we go through to make our version of this map: