@GBRyker61
I probably will release the files at some point, the files currently look great, but require lots of internal work. This won't be just a shell of a prop, it will have lots of internal components. Due to the high cost of many of the parts it may make more sense to try a group buy then try to do builds individually. I guess what I am really saying is I am not yet committing to either path.

If you complete this one with the details you are designing, you will be a god among geeks.


zapwizard said:
@GBRyker61
I probably will release the files at some point, the files currently look great, but require lots of internal work. This won't be just a shell of a prop, it will have lots of internal components. Due to the high cost of many of the parts it may make more sense to try a group buy then try to do builds individually. I guess what I am really saying is I am not yet committing to either path.

also I was thinking, the rotary encoder I have already has a good feel to it, with clicks at each stop. The need to the spring plunger you have shown might not be necessary.

I don't know what this it, but I thought the first picture was the real prop. But what is this thing?

zookone:
Not all rotary encoders have built in detents. In fact I specifically selected one without. The reason is I don't want the stops to end up on a odd fraction of the gear turn. By doing it myself I keep control over how the detent feels.

Getoninja:
The Pip-Boy is effectively a smart watch from the 1950's. In the game it is your access to status, inventory, map, mission selection, health indicator, etc..
It has sensors to detect radiation (fallout) as well as other things.
The upcoming game Fallout 4 has a companion app which runs on android and IOS. So once built, my model won't just be a costume prop, but will be fictional as and in-game controller, as well as have some real world external functions which emulate the in-game functions. That last part is more of a stretch goal.
Last edited by a moderator: Nov 8, 2018 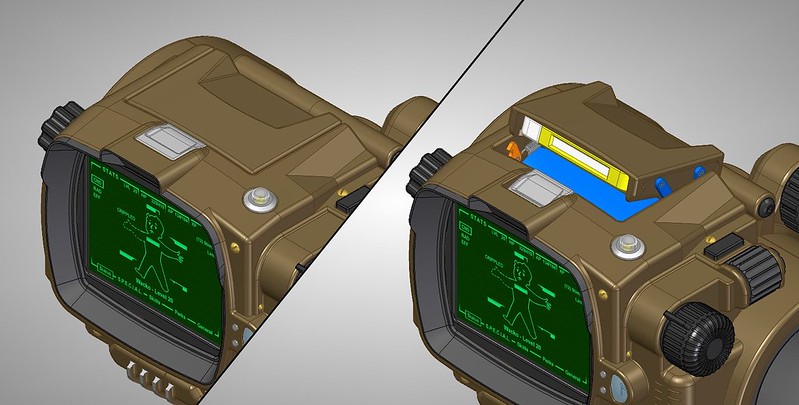 Today I designed the holotape mechanism. Let me tell you that I have a new found respect for cassette deck designers of old. The design isn't totally complete. I still want to add a auto-eject mechanism that feeds the tape back out when it opens, and a damper to make it open smoothly. But for now I need the design in place to move on with other internals parts.

It seems so simple. Press the eject button, and the holotape holder simply pops up!

Achieving this effect mechanically is anything but simple. What I had to design was a very compact system of hinges, rods, and slots.
The eject button pushes on a rod, this in turn moves the catch backwards. Springs pull on lever arms which lift the holotape holder upwards. Springs on the rod pull the eject button back into position. The user can remove the holotape or insert a new one. They then press down on the tape holder. The catch slides backwards a bit and then catches on the hook in the holder. Springs pull it back, and keep everything just where it should when closed. 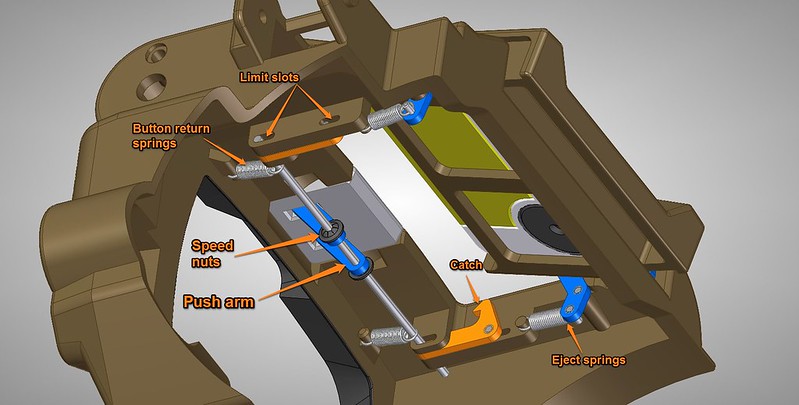 All the hardware (Springs, rods, and pins) are McMaster parts. The lever arms will probably be made from aluminum with permanent pins press fit into place. They can also be made from stiff FR4 (PCB material). Speed nuts keep the long shaft from sliding. While it looks impossible for the long shaft to even get into the assembly, it will install at an angle when inserted from the opening where the holotape holder resides.

Sent from my SAMSUNG-SM-G900A using Tapatalk

Im getting my udoo neo early through kickstarter. there was a previous version just called the udoo. It uses ubuntu and I believe it is also android compatible. Ill be doing a working prototype in the coming month with the neo

Those renders on first post had me fooled for a minute. Impressive design work, i'll be keeping a close eye on this.
G

considering RFID or NFC tags in the holotapes to trigger something to happen when inserted into the deck?

I just got a version of dragonator's model printed at queenie and steve's hub on 3dhubs.com. highly recommend. anyway im planning on making mine functional to the point of being a programming and control platform for my mechanized t-60 power armor that im creating with the partnership of blackout props. ill also be using it a a programming control platform for my self balancing skateboard.
i like the idea of having a replica but i dont know if ill go as far as to put a legitimate geiger in it as of now. im working my own model using solidworks to incorporate a hidden micro qwerty keyboard. not exactly lore friendly but more purposeful to me. im just having trouble figuring out where to hide a power supply for everything. any ideas?

RPF PREMIUM MEMBER
@GMBridge, Yes this is detailed in the first post.
@jellis359, I think I will be able to fit a 2Ah Li-Po battery into my enclosure. I plan on having a hidden USB connector inside the wrist band. That way if more power is needed it can be run through a cord in the wearer's sleeve. 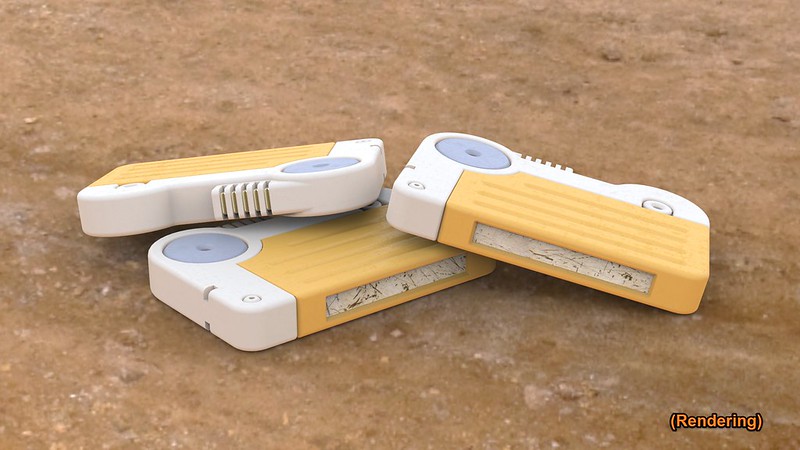 Today, I re-designed the holotape from scratch. This way I am not reusing a part of dragonator's model. Although I did use his model as a general guide.

Ive just picked up my 3d printed pieces. Im taking the chop-a-block approach and removing material to fit my components. There's plenty of room in this model already it seems. Ill be getting creative with this one.[emoji1]

jellis359 said:
Ive just picked up my 3d printed pieces. Im taking the chop-a-block approach and removing material to fit my components. There's plenty of room in this model already it seems. Ill be getting creative with this one.[emoji1]
View attachment 521245

Sent from my C811 4G using Tapatalk
Click to expand...

Hey John, looks like you're getting right to it! I'm a bit surprised how many additional parts I needed to print which could have been incorporated into the larger ones so it wouldn't necessitate so many pieces (and less gluing). 43 pieces and 38 hours all together! Let me know if you need anything reprinted. I'm looking forward to seeing this thing put together and fully done up!

RPF PREMIUM MEMBER
That looks cool jellis359, but I would appreciate you keeping your project images to your own thread. (Since your build isn't from my design)
I think Dragonator's design was split up to fit a printer with a small print bed.

My design has as many parts integrated together as possible. For example the entire screen surround and front half are a single piece.
SLS 3D printing doesn't require support material, and so you can make almost any geometry you want.

Np sorry about that

God I want this build to happen almost as much as I want the game to come out.

I like your take on the "radiation probe" attatched to the back of the Pip-Boy. I've noticed that the wire leads into a circular extrusion on the casing, perhaps there's excess wire wound up on some kind of pulley that can extend and retract

zapwizard: Mega Awesome. I hope we will see a run as soon as you are finished with your great work.
Last edited by a moderator: Nov 8, 2018

RPF PREMIUM MEMBER
Grey, I agree that is looks like the cord is a spring-loaded re-tractable cord. I may take a crack at designing a mechanism to retract the cord. Creating a spring wound reel isn't the hard part, creating a mechanism to lock the cord at a set position is the hard part. However, I want to keep the high voltage electronics for the Geiger counter isolated, and may need the space for that.

Currently I am working out all the locations for the internal circuit boards, the image above is far from final, but gives you an idea of how much is packed inside.. The Beaglebone Black just barely fits inside.

Each knob and switch will have its own small PCB. This way the system can be tested prior to assembly. The above image shows the power button board. It uses an amber illuminated tactile switch with a clear cap. A JST connector and short est of wires will connect it to the motherboard. The trim on the switch is a modified finishing washer.

I am going to use a simple CdS Photocell as an ambient light sensor. It will be soldered directly to a connector (or cable), and hot-glued into the clip-in cover.

I determined that the amber button on the very top of the Pip-boy is labeled "Light". This makes me think that perhaps the white pod on the back of the Pip-boy is a light. On the Pip-boy 3000 the "flashlight" was nothing more than the screen going full bright. At least one person has told me the pod isn't a light, but I don't know what their source was.
In either case, there is a small amount of room for a set of forward facing LEDs (Flashlight mode), and a set of LED strips (Lamp mode). It is a bit of a risk having LEDs close to the 500V signal needed for the geiger counter. The risk being that the LEDs will burn out if a stray arc crosses into their circuit. So it may end up being that you either select a kit with a light, or a kit with a geiger counter. If I skip the geiger counter, then a IR temperature sensor could be installed in its place. 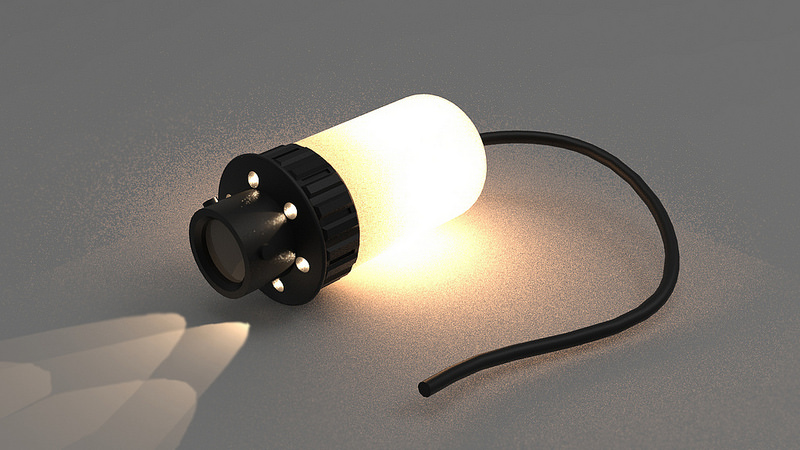 Here is a rendering of what the pod might look like when illuminated. I like the lamp effect, but I think I may ditch the forward facing LEDs.
Any opinions on the light? Anyone else have a source stating that the white pod isn't a lamp?

I thought that the white pod on the back was a light as well.

P
Gizmo from the My science project movie
6 7 8

Yesterday at 5:50 AM
joberg