Now my own little workshop is build and everything is installed, finaly I can start again with some new stuff.

Besides the AVP gaunts and the orders I started with a new armor for the misses. She wants a complete make over of her femme pred for Kultiverse in Paris.

So, here's the start of the new chest armor.

You can see that there are a few styles in it like the AVP armor, P1 armor and some wolf (tribal signs like on the wolf bio)

The mission is to make it a heavy combat armor but still sexy... 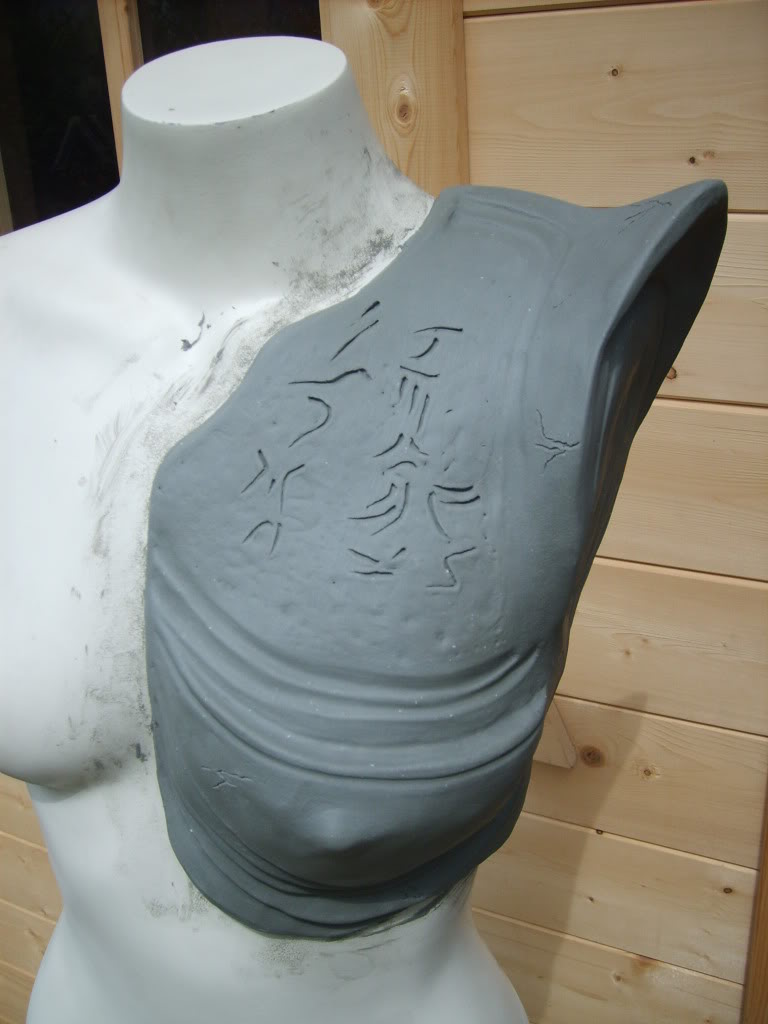 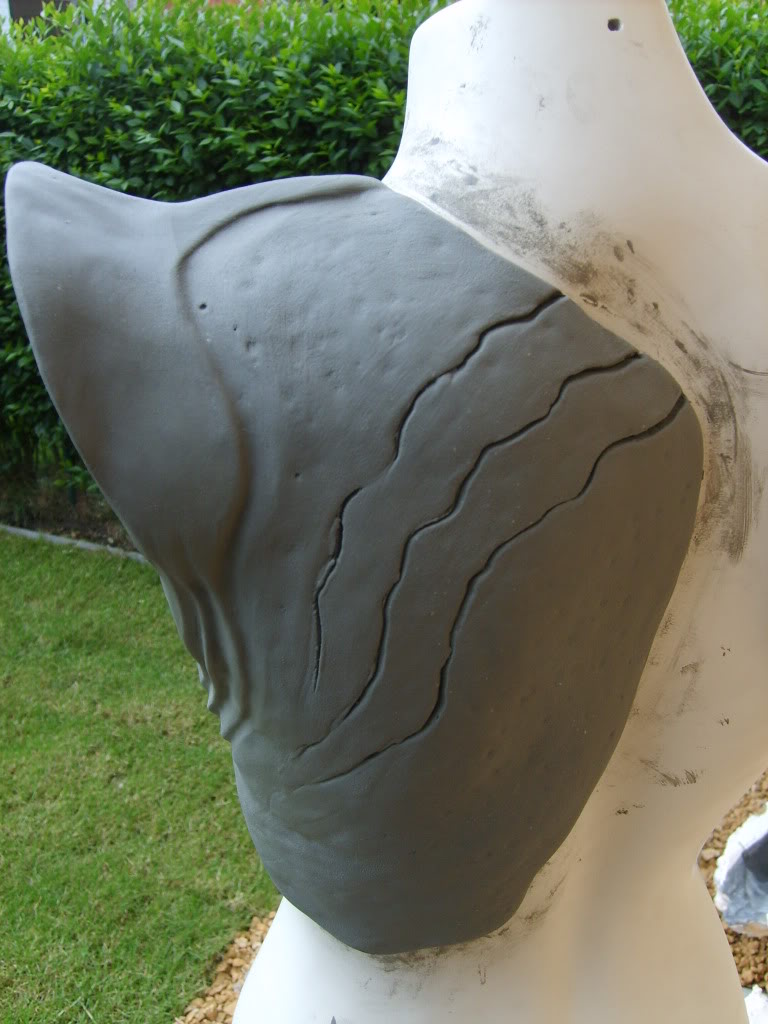 nice! what clay do you use?

That looks amazing. Your very talented

Here it is before being molded.

Forgot to take a picture of the back

When I removed the mold, it broke but I managed to save it (that's one good thing done today) 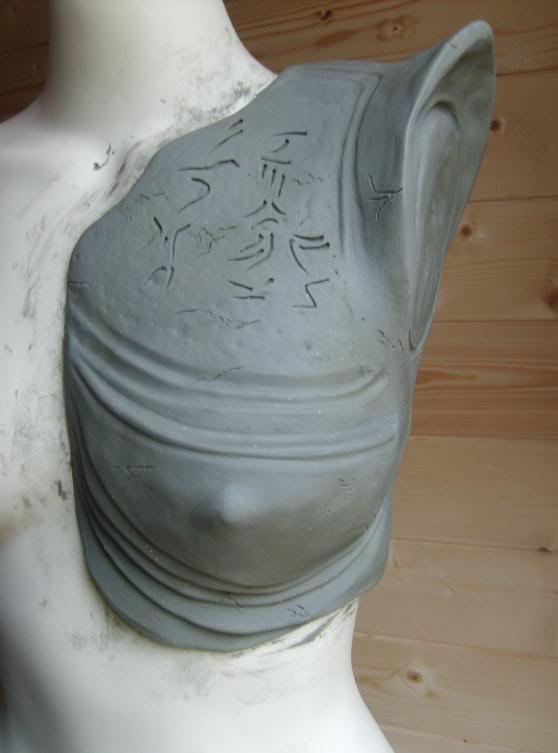 Looks good, many of the female hunters are going to thanks you for this
D

The armor looks awesome, I love the idea.. but I do have a suggestion...

speaking as a woman and a fellow costumer... how often do you really see size 0, A cup chicks who are into predator? or even costuming in general? most of us are more of an average size with definately larger assests.. to some of us something that would be a pastey .. Just something to think about...if you're wanting to make something to attract the female costuming community, it has to fit..
I had the same problem with my bob bagy torso, just way too small, it took craig and I so much work to even get that thing around me and the bottom of the torso was still barely at the bottom of my navel In the nerd world, most chicks just are'nt built like super models.... or mannequins for that matter

I would LOVE to see someone build a set of femme armor that actually came in a few different sizes..... women are so diverse in shape and size... we can't just put in cushion foam to fill out the muscle suit.

She has a good point. Might be hard fitting an uhm, large boob into that armor piece. Might be uncomfortable too.

My only suggestion is to lose the nipple outline in the metal armor. After all, why would a nipple outline show through a metal piece of armor?
Click to expand...

I was going to mention that also, but forgot...

....I personally wouldnt wear it for that reason.... it'd kinda be like having an outline of your wang on your cod piece lol...

Ha, let me get some things straight.

My wife has got rather larg brests (no, I'm keeping the size for myself) and here previous armor was also some kind of an armored bra, smaller like this one.

When she puts on the latex skin, the femme chest armor piece still need fillings. It's your pred skin that is holding the "things" in place, not the armor.

I can't speak about Bob's femme suit because I've never seen it upclose. But since the skin and armor are one piece... so you'll have some problems with the shape of the armor and getting in it.

Because it's sculpt on a mannekin, that doesn't mean that the armor is going to be strictly for woman with a modelfigure. This is only one part of it, I got some inspiration from the AVP chest armor so when it's finished you can adjust the size.

And about that nipple coming thrue a metal armor piece... Have you ever seen a gladiator armor? The musscles structure was also showing on those armors, this was to intimidate the enemy, on this armor it's to higlight that you'r standing against a femmale pred.

What else can I say... Trust me, I'm a female pred armor sculpter

i think they were just trying to give you a little constructive input. not trying to offend

Ho, I was not offended at all , I was giving my idear off the concept.

Dakath said:
Ho, I was not offended at all , I was giving my idear off the concept.
Click to expand...

good deal! i think the armor is pretty damn cool myself, and if you can get it to fit multiple sizes of boobies, i think you may have a nice army of fem preds at your disposal

K just my 2 cents..... do we really know if female predators even have breasts? We just assume. I mean have you seen what Male predators wear I don't think they have a ....ya know..... I mean I like the armor but come on man the nipple lol I think it would look more badass without it just my 2 cents. You can give me my change back if u don't want em hehehehe.

Dakath said:
And about that nipple coming thrue a metal armor piece... Have you ever seen a gladiator armor? The musscles structure was also showing on those armors, this was to intimidate the enemy, on this armor it's to higlight that you'r standing against a femmale pred.
Click to expand...

The breast shape itself should be enough to know its for a "woman" pred. The nipple almost comes off like its trying to be sexy lingerie armor.

Garo, do you have the books of ADI?

Never seen the sculpt of that naked pred?

A sexy Lingerie armor... Have you read the post? It must be a heavy battle armor but still sexy. That's just why the nipple is there, to highlight that it's a femme pred and a darn sexy one to.

Realy, sometimes I don't get this. You see WIP from cardboard bio's and everybody cheers... Good job, nice design, and what else.

But blowing this nipple thing out of proportion? come on, you don't have to wear it! And maybe I can show this armor for the first time during Superbowl... it looks like it's going the same way.

Mods, let's put a lock on this and why don't we all go see how the cardboard bio's and toiletpaper roll gaunts are made.

Dude I think the nipple thing is cool. Don't get me wrong, I didn't even think about the latex skin going on before the armor, so your right, it should fit right and don't let anyone tell you that the whole nipple thing isn't right. Being custom is always the best in my opinion! And your work speaks for itself. Awesomeness!