I'm trying to find a model of a Soviet unmanned lunar lander called Luna 23. I haven't even found photos online but in a pinch i could use Luna 24 as it sounds like there was little difference. I haven't even been able to find good sketches of these to use to scratch build. Anyone have any ideas of where to find good materials for making one of these or better yet kits existing?

wow your right there isn't any thing about (Lunik 23 Ye-8-5M series) ( Info wise there is quite a bit, seems that 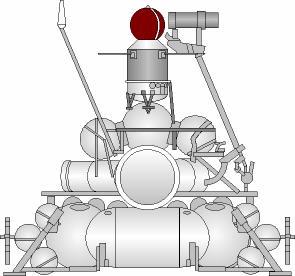 ( pic wise) not much luck on Lunik 24 either......
so far only this on Lunik 24 is this La Luna - Programa Luna (Unin de Repblicas Socialistas Soviticas)

Either way so far if u look at the pics it seems that the general Lander/ robot was the same one for the 11 launches and only varied on updating drill bits, shovels, collector cans and bines etc etc stuff like that
will keep looking for u ( i like this )

http://nssdc.gsfc.nasa.gov/nmc/spacecraftDisplay.do?id=1974-084A
Questions or comments about this spacecraft (Lunik 23)can be directed to: Dr. David R. Williams
David.R.Williams@nasa.gov
Last edited: Mar 4, 2012

RPF PREMIUM MEMBER
Many basic spherical shapes, looks like it would make for an interesting and not too complicated scratch build!

Wes, go for it, I love seeing obscure space crafts! I remember building the Lunar Lander OOB from Revell for a project week in school, just right around the time that ROTJ was showing, this kind of took me back somehow to that summer. Oh, and there was an ice cream, I can´t remember what it was called, but it hat a lot of space craft on it, russian, american, european, I think even a chinese concept craft. There definitely was the Lunochod moon explorer on it. As crazy as it sounds, I might have a wrapper of that ice somewhere, and I´d def play the lottery on the I find it and it has a pic of the probe you´re looking for on it :lol

That's a better one than I've found so far. YOu'd think this long after the cold war there'd be photos and everything else about it. The only kit i found was of Luna 24 that was made for someone and it had a container of dirt the probe brought back on it.
I hope to build this for my Mass Effect model displays as you supposedly come across this on the moon's surface but the game makers got lazy and used a generic probe from another area as the Luna 23.
Last edited: Mar 4, 2012
You must log in or register to reply here.
Share:
Facebook Twitter Reddit Pinterest Tumblr WhatsApp Email Link
Top