Can't believe how expensive the BF Slave 1 version is currently, hoping for some releaseses that are normal priced this year

Regarding the new Revell catalogue, I'm REALLY looking forward to the 1:48 Blackbird and the Razor Crest. Finally something new (albeit I remember seeing a large-scale Blackbird in the 80s and kicking my a** ten years later for getting the 1:72 version instead ). So the ones who did not back the Haslab RC because of her mere size will have a chance to get a smaller alternative (like me ) .
P

Not to forget that Revell in germany has the licence for selling Bandai( they sell it even with Bandai-Label, no repack); Ok, they have only a small selection of the kits and much higher prices than ordering it from TMD, but at least it's a chance and somtimes better than some of the high-priced sellers...

Indeed. I was lucky to get the Revell-boxed B-Wing at a very reasonable price last year.

Sindariel said:
Revell is reselling Bandai Star Wars kits for more than 1,5 years in Europe, already. And they're much cheaper than buying them from Japan.
You're a bit late to the party, INVAR.
Click to expand...

I'm not European. I don't plan on being European. So I am unawares outside of this catalog announcement that Revell had an agreement to distribute Bandai kits there in the EU. Sure with shipping and your VAT taxes there, it may be likely cheaper to buy a Bandai kit from Revell than ordering direct from Japan. Certainly it was cheaper for us in the states to order the Zvezda direct from Russia and have it shipped here (around $100 bucks US back in the day) than the Revell repackaged version which went for nearly double.

Revell is a bit more of an expensive party in reboxed kits from other model manufacturers than ordering direct from Japan or Russia for us here stateside.

That changes when it comes to 'build-N'-Play' toy kits Revell has flooded us with. You can grab them easily at retail for anywhere from $15 to $30.I even nabbed an extra Rogue One Build N Play Star Destroyer for $11.00 last year.

I'm just bummed we didn't get a 1/62 scale model of that Mandalorian speeder. Seriously WTH is with the box scale stuff? They have got to know kids aren't buying model kits anymore and that it drives the adults nuts!

This is the state of much of the new trilogy stuff in Japan...the bottom bargain bin shelf 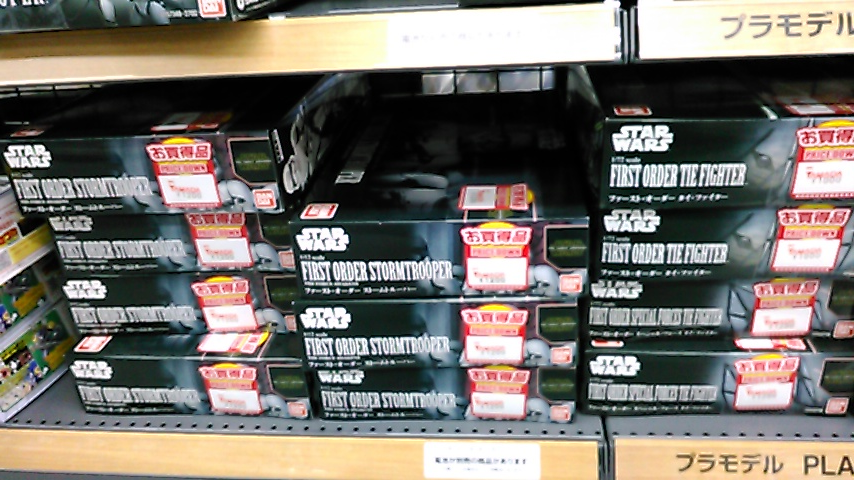 In the picture above, I notice that it is all First Order stuff. I don't mind the Sequels, personally. But I think everyone would like to see more from the OT and possibly, the PT. Definitely the Mandalorian.

thud83 said:
In the picture above, I notice that it is all First Order stuff. I don't mind the Sequels, personally. But I think everyone would like to see more from the OT and possibly, the PT. Definitely the Mandalorian.
Click to expand...

These are all deeply discounted kits, but on the shelf right above it is the Sandtrooper kit at full price

I think a big part of the problem is Disney wanted Bandai to produce stuff for the sequels, but apparently it did not sell yet they were still contracted to do so for the next few movies

It's one of the reasons they probably went for slight re-tools of Force Awakens kits (like the different colored X-Wings, the Falcon with new dish, etc... over wasting time on some of the other kits like Kylo Ren's Tie Fighter or the ties from Rise of Skywalker.

I am guessing based on lackluster demand for Force Awakens kits they did whatever bare minimum they had to in order to fulfill demands by Disney for new product while slipping in some OT kits.

Remember, they need approval from the license holder to produce kits. If Disney wants a First Order Tie Fighter that is going to take precedence over a Tie Bomber for example.

While I cannot confirm so, I seem to remember reading somewhere that Lucas still gets a merchandising cut of the pre-Disney stuff which could be why they are reluctant to dip too much into that era as well


And as I was told, the division that handles the SH Figuart figures and key chain logs and stuff is a different division than the modeling division which is now known as Bandai Spirits. So just because they may be releasing Mandalorian stuff in the SH Figuart line does not mean they have a current license for the model division.

At the very least, the hope we can hold on to is they still seem to be repopping the better selling kits periodically. Hopefully we see something new, but for now, there is nothin on the release schedule

Honestly, I'm not going to worry about any of this until the pandemic is over and economic activity begins to recover. It could be a while.

Yes, hopefully you are right. But after the pandemic, I won't have the time to build kits that I do now 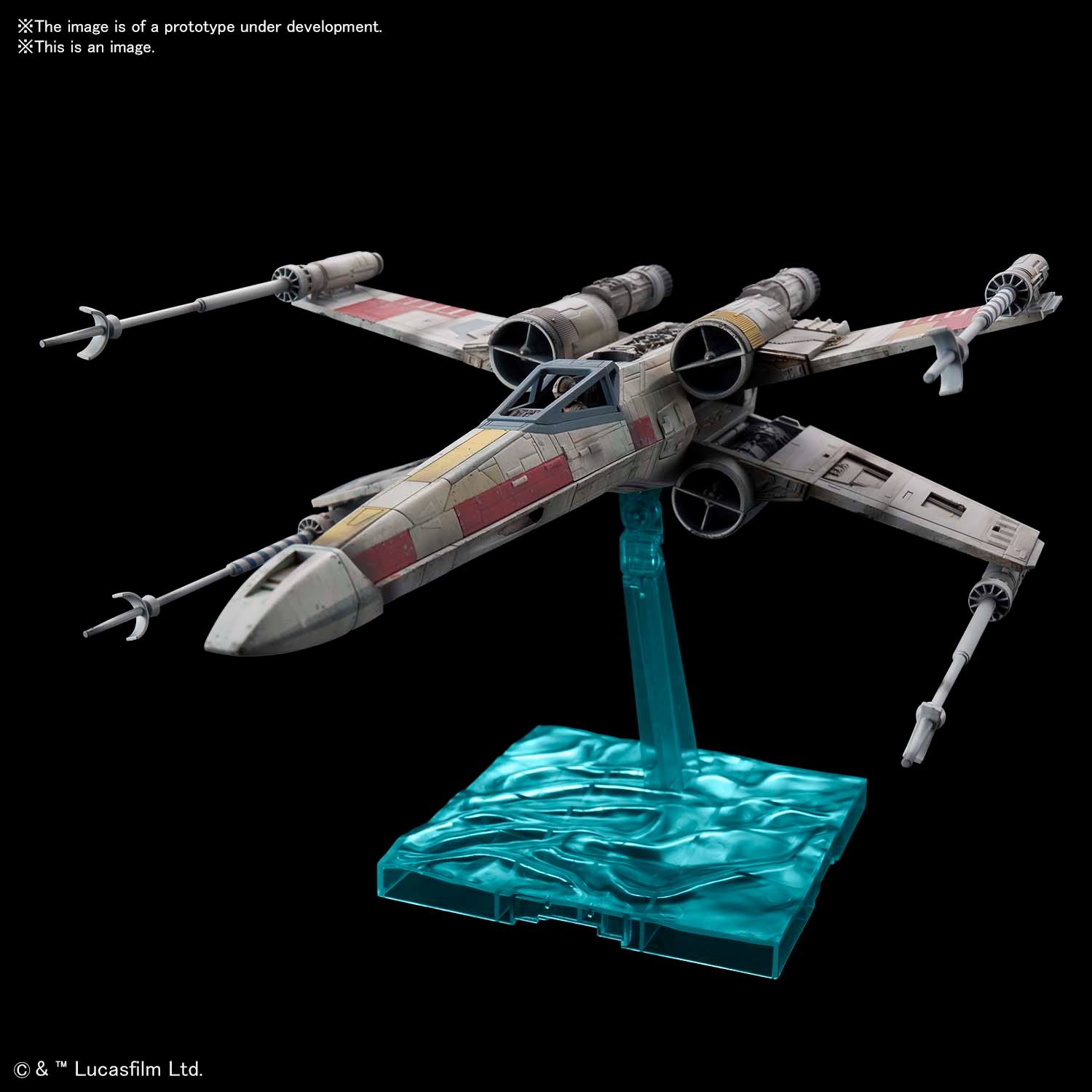 Well, it is a least something


new Rey Pilot figure and a "water" base are the changes

...and Rey Skywalker at the controls.
Oh goodie! 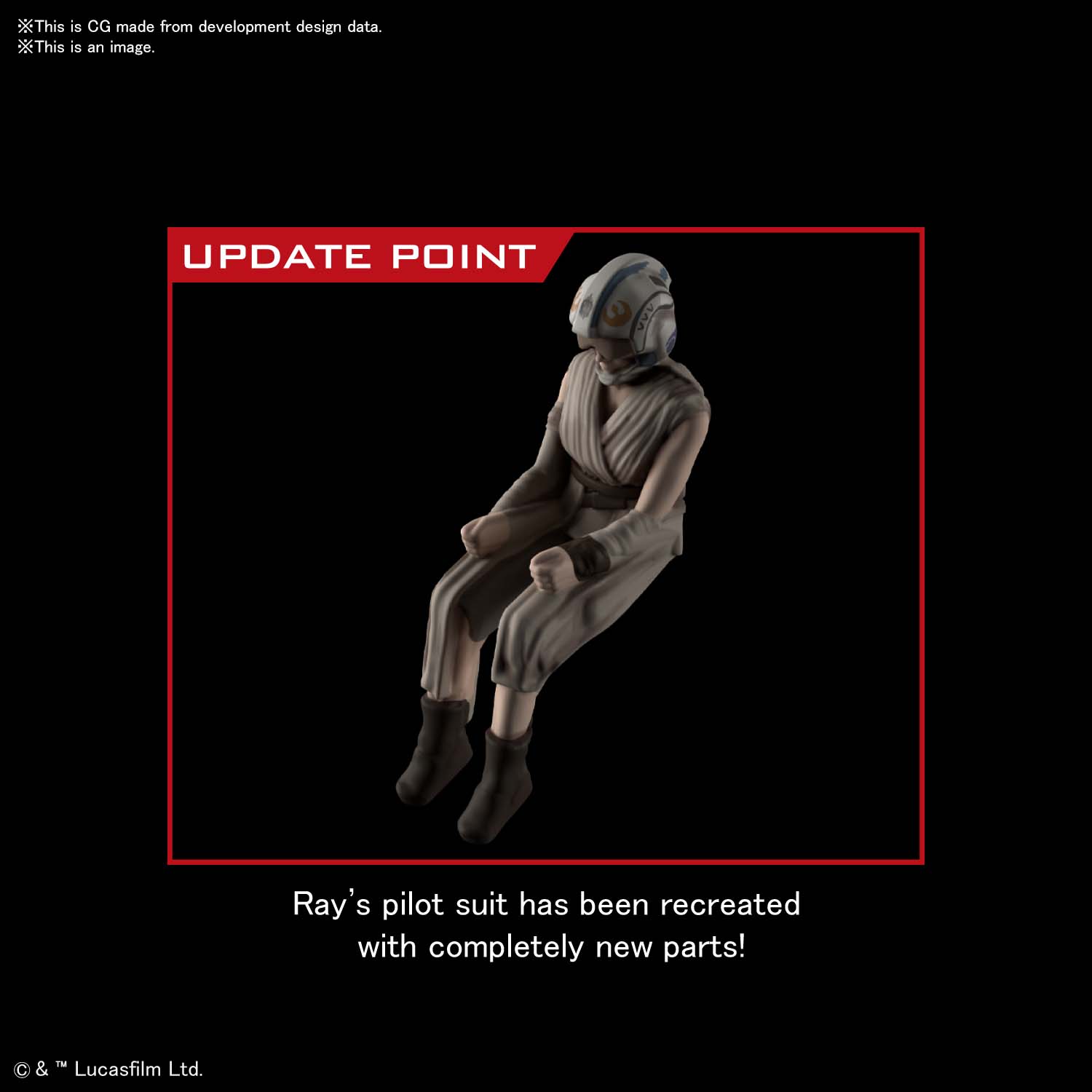 lol... there goes theory that bandai dont see any money in the sequel trilogy /s

leonida5 said:
lol... there goes theory that bandai dont see any money in the sequel trilogy /s
Click to expand...

Except the only thing they are creating new here is the Rey pilot figure. Everything else is existing molds. So minimal new tooling costs. Even minimal sales on this would likely still net them some kind of profit.
M

Love Rey, but I'll err.. give that a miss thanks! It's something at least.
L

Zuiun said:
Except the only thing they are creating new here is the Rey pilot figure. Everything else is existing molds. So minimal new tooling costs. Even minimal sales on this would likely still net them some kind of profit.
Click to expand...

leonida5 said:
Yeah true but at least it also means that any x-wing shortages are about to be fufilled and anyone buying it will discretely disgard the figurine
Click to expand...

Don't get me wrong, I'll be happy to see them continue to put out Star Wars product. Any SW product. I'd love to see them produce some new stuff... but as has been discussed, who knows what their license will allow or what their actual profitability is? But I love what they have produced. I've doubled up on some of them and there are several more I'd be totally willing to double up on, too. So new kits or not, I hope they don't stop producing the stuff that's already out there any time soon.
R

A question is whether it includes the original X-Wing Pilot figure and the R2 units. Otherwise, it could only be built flying with Rey, from like 2 minutes of the movie.