RPF PREMIUM MEMBER
Sad about Howard Shore, but I get it.

Clearly going to see a lot of the first age. They showed the two trees, and what I am assuming is footage from Dagor Bragollach (all the ashes and fire, and very possibly the Balrog) and Nirnaeth Arnoediad (the footage of Finrod and Galadriel fighting).

I think he did God of War? The music for that was really good. But it’s not as traditional as Shore.

HMSwolfe said:
I think he did God of War? The music for that was really good. But it’s not as traditional as Shore.
Click to expand...

Yeah he did. I've never listened to it. So I couldn't say.

So, what exactly is this show about? Is it about Sauron forging the rings or is it after that? Before that?

I like McCreary's works, but Howard Shore's operatic compositions for the series really made the movies feel so big and grand, like a modern epic.


Laspector said:
So, what exactly is this show about? Is it about Sauron forging the rings or is it after that? Before that?
Click to expand...

It's going to be about the Second Age of Middle Earth. Morgoth (Sauron's master) had just been defeated at a great cost to the elves, who are now moving on to explore across the sea to the rest of Middle Earth, and eventually settling in the lands that we see in The Lord of the Rings. Sauron, meanwhile, fled to Numenor, where his influence there led mankind to attack the Undying Lands (basically Elf Heaven), which in turn caused the Iluvatar (the dieties of Middle Earth) to sink the island of Numenor, and men fled to the lands we see in Lord of the Rings.

Sauron fled to Mordor, where he began raising armies, and the forging of the Rings of Power, 3 of which he gifted to the Elves (whose magic was able to negate their power), 7 to the Dwarven Kings, and 9 to kings of men, who became the Nazgul. When the Elves felt Sauron's treachery upon the activation of the One Ring, the Elves and men declared war on Sauron. Sauron's defeat ended the Second Age.

That's basically a super condensed version of what happened, and how much of that we will see is in question because the Tolkien estate refuses to allow WB access to anything but the appendices to Lord of the Rings and The Hobbit.

The Appendices basically contain the Cliff Notes version of the events prior to the Third Age, including the sinking of Numenor, but the bulk of it, and the more detailed version of it, are set out in The Silmarillion, The Unfinished Tales, Children of Hurin, Fall of Gondolin etc... which Amazon do not have the rights to. That's why in the trailers it says that it's "Based on" the works of Tolkien rather than "Adapted from". So because of that, from what we've seen in the trailer, teasers, interviews etc., what we will see in The Rings of Power will greatly diverge from Tolkien's lore, e.g.;

Numenor being ruled by Queen Tar-Miriel with her husband Ar-Pharazon as her advisor. In Tolkien's lore, while Miriel was the heir apparent, Ar-Pharazon forced her to marry him and he usurped the throne becoming King. It was he who later "captured" Sauron (after he discarded the Annnatar persona), and it was Pharazon who, after Sauron became his chief adviser, decided to attack Valinor.

In Tolkien's lore, Galadriel at this time was already married to Celeborn and they moved from Lindon to Eriador before finally settling down in Lothlorien. In RoP, Galadriel appears to be unmarried - Celeborn doesn't appear to be part of the show. And she is now a warrior, leading armies and slaying orcs - totally different from Tolkien's lore.

Galadriel never went to Numenor and never met Tar-Miriel. But in the show, from the trailer with the palantir, it seems both of them are working together, and are the ones that sensed the coming of evil - in the lore, it was Galadriel, Elrond and Gil-galad that afsensed Annatar wasn't who he said he was.

And I really hope that Eminem looking fella isn't Annatar. In my mind, Annatar should look like Lee Pace as Thranduil in The Hobbit.

The show supposedly has King Durin III and Prince Durin IV at the same time. In Tolkien's lore, the Dwarf kings are named Durin because they are believed to be reincarnations of the Durin that came before. So having two Durins at the same time doesn't make sense.

That Balrog that appeared at the end of the trailer better be a First Age flashback. After the War of Wrath, there is no mention of any Balrog throughout the Second Age until Durin's Bane in the Third Age.

But probably the biggest beef with Tolkien fans is the time compression: the rise of Sauron (as Annatar), the forging of the rings and the reign of Pharazon to the fall of Numenor take place over the course of about 2000 years. In the show it looks to be compressed to just over a few years to fill out the proposed 5 seasons.

With all these changes its no wonder Tolkien purists are up in arms with regards to this show, as it greatly changes Tolkien's lore. In fact, there's a rumor going around that Tom Shippey, the Tolkien scholar that was advising on this show, was actually fired because he told the showrunners that they were polluting the lore.

Perhaps the only shot I like in the trailer was that with the Two Trees of Valinor - truly gorgeous. But I'm not holding my breath for this show to be good. The fact that it will be released on the anniversary of Tolkien's death is kind of disrespectful for me, exacerbated by the "the past is dead" line in the trailer.
Last edited: Aug 11, 2022

So… apparently Amazon asked Peter Jackson to help with the series, and then ghosted him. Surprisingly, he says he holds no I’ll-will with them and plans on watching the show as a neutral viewer. 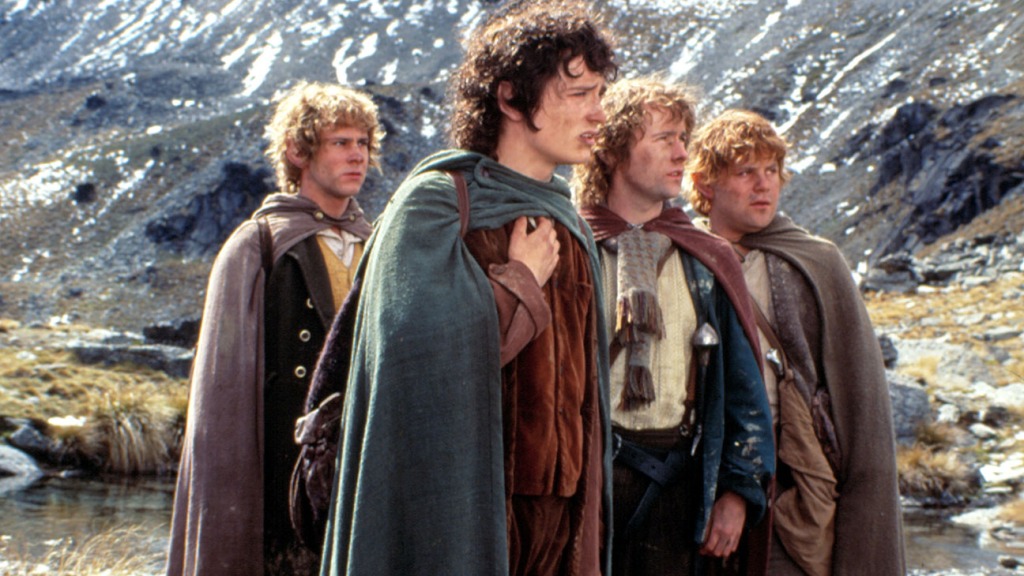 The Oscar-winning director says Amazon asked him to be involved with its megabudget 'LOTR' series — and then cut off contact. Amazon suggests the story isn't quite so simple.

kalkamel said:
The fact that it will be released on the anniversary of Tolkien's death is kind of disrespectful for me, exacerbated by the "the past is dead" line in the trailer.
Click to expand...

It's like they meant to imply a "passing of the torch" but didn't realize how horrifically distasteful and morbid it could actually come across.
At first I thought it was a disrespectful expression of hubris, but then I considered Hanlon's Razor: "Never attribute to malice that which is adequately explained by stupidity."

dascoyne said:
It's like they meant to imply a "passing of the torch" but didn't realize how horrifically distasteful and morbid it could actually come across.
At first I thought it was a disrespectful expression of hubris, but then I considered Hanlon's Razor: "Never attribute to malice that which is adequately explained by stupidity."
Click to expand...

Well, you know it was gonna suck with the line, "You have been told many lies... about Middle Earth," which clearly the writers trying to give an excuse to justify their show's existence.

I guess a simpler example would be wanting to adapt a bestselling novel, but you only have the rights to the synopsis, the table of contents and the indexes... of the sequel to that novel. So while the names of some the characters, the locations and concepts are Tolkien's, a majority of it would have to be made up by the writers to connect them together. As they have been quoted, they're trying to "write the novel Tolkien didn't write". At the end of the day, it's mainly fanfiction, and an expensive one at that. 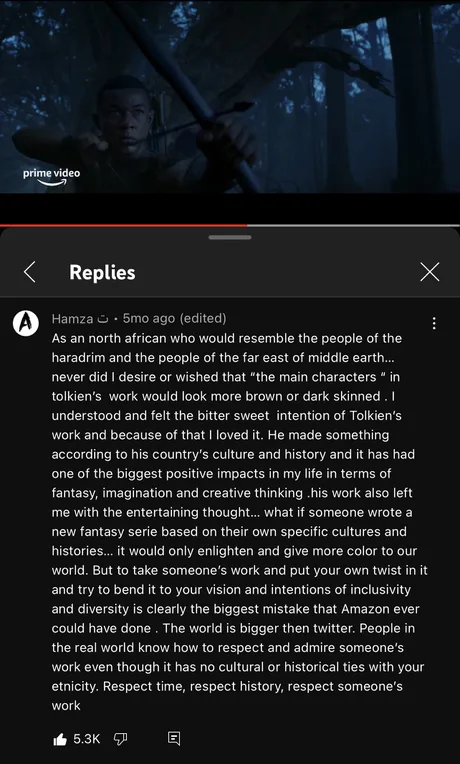 What is he going on about? This isn't LoTR, it's just a cash grab taking advantage of the fact that Tolkien is dead.

RPF PREMIUM MEMBER
So essentially this is Tolkien fan fiction?

RPF PREMIUM MEMBER
That’s how it seems. I don’t know how much better it can be than that if they don’t even own the rights to the relevant information…

RPF PREMIUM MEMBER
I think people are forgetting how much Peter Jackson made up for his films as well...

Peter Jackson had the rights to the Lord of the Rings and to the Hobbit. Granted he made some changes to the characters and story, and in the case of Tauriel, added a new character, but overall he tried to stay as faithful as he could to the source material. His was an "adaptation".

Amazon's on the other hand is not an adaptation. They're literally rewriting a bulk of the story of the Second Age because they don't have the rights to The Silmarillion, The Unfinished Tales and the upcoming The Fall of Numenor. The characters no longer are the way Tolkien intended them (see my earlier post), hence why they qualified it as "based on" Tolkien's work rather than an "adaptation".
H

Kylash said:
I think people are forgetting how much Peter Jackson made up for his films as well...
Click to expand...

The Lord of the Rings movies were decently faithful. They did remove characters and remove stuff since it wouldnt fit the tone (Tom Bombadil) or because it would still be too long. Arwen having a greater role was apparently due to pressure on Jackson to make Arwen a "warrior princess" due to "audience expectations" and add jokes like dwarf tossing. The added scene of Faramir capturing the hobbits and Denethor being super incompetent and evil arnt great but may have been to increase the contrast between Theoden as the good king. It wasnt perfect and Jackson did get criticism for warrior princess Arwen.

The Hobbit trilogy is a joke but so is asking a director to stretch one book that is shorter than any of the 3 Lord of the Ring entries into its own trilogy. You have to make stuff up to fill in the holes and the hobbit films arnt well liked.

Given the budget Amazon has, I do think a Lord of the Rings show based on the trilogy they actually have the rights to isnt a bad idea. They can do their own interpretation and as a tv show, they can go longer and cover all the things the movies didnt such as the scourge of the shire, a scene that would have been impressive as we see how far the hobbits have evolved from their journey. Could be at least 3 seasons.