I'm working on my blaster with CE parts and this thread has been a great resource. My R0-72 is missing the stock nut, and I still need to fabricate the F-4E bomb parts. I can't face sourcing a kit of eBay, was it the Revell or Tamiya 1/32 Phantom? 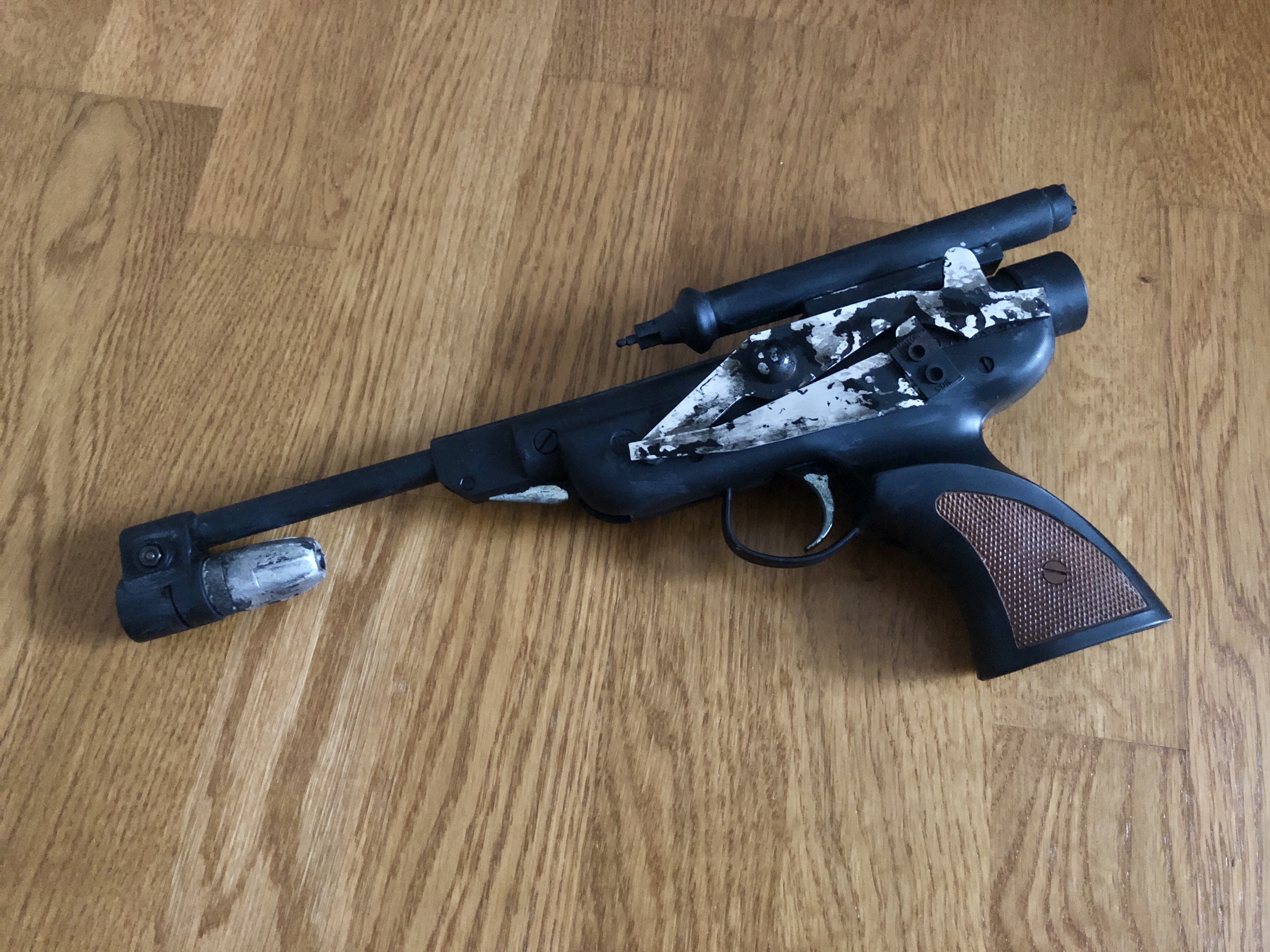 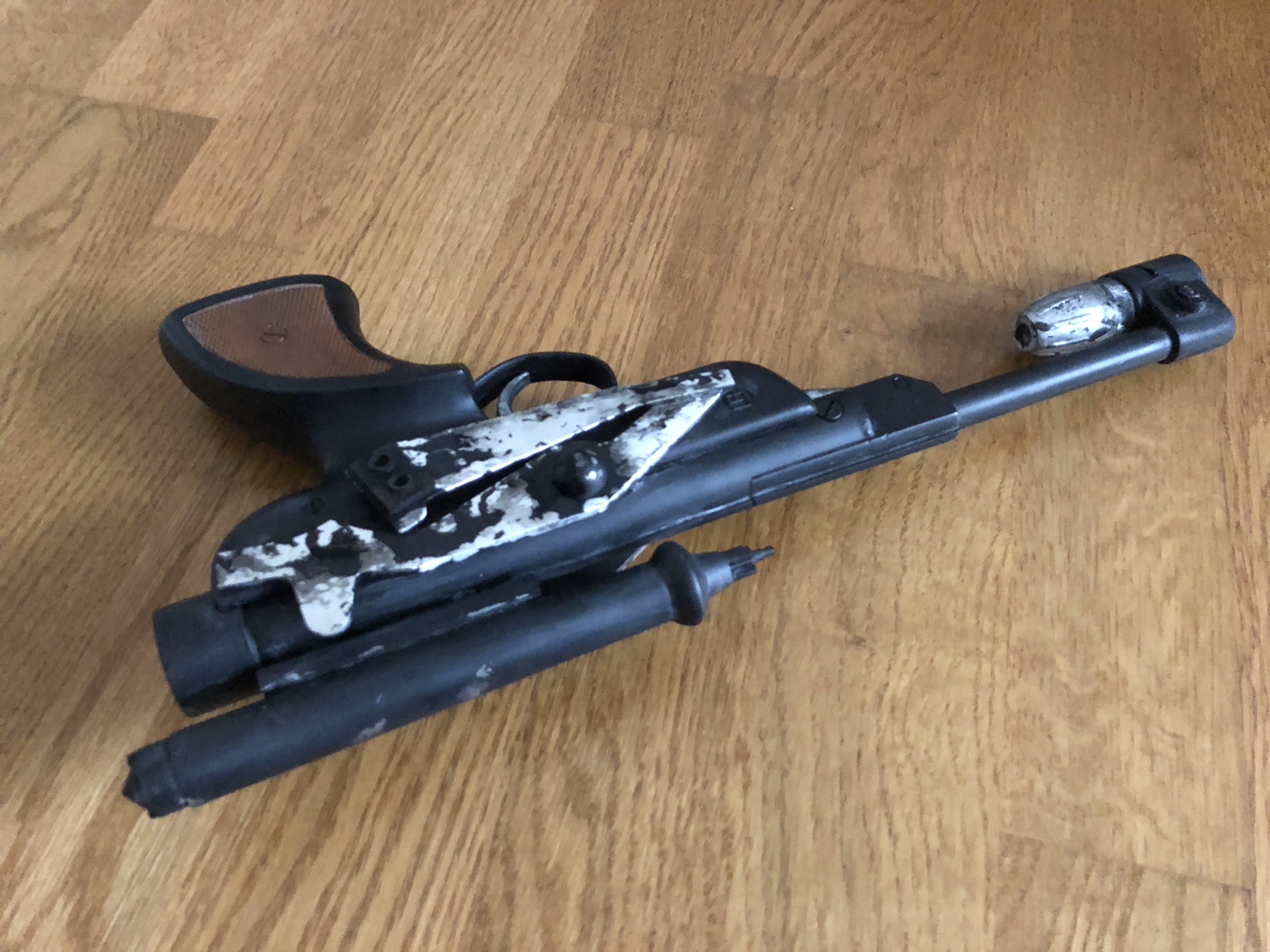 I've got bomb halves if anyone wants to mold them.

You remind me I have to paint my grips brown, oops

Also, I did use an old T nut on the endcap, drilled a fat hole and popped it through with some E6000 to keep it situated.

My scope sits a little far back because of the already assembled scope - it's feet I drilled for the french gun so I didn't move them back. I did try to keep it centered but the scope seems a bit longer now that I've been looking at it for some time

Hi thd9791, is the "T nut" a cap that goes over the nut from a car wheel or a type of nut in itself? Not sure what to search for on eBay. 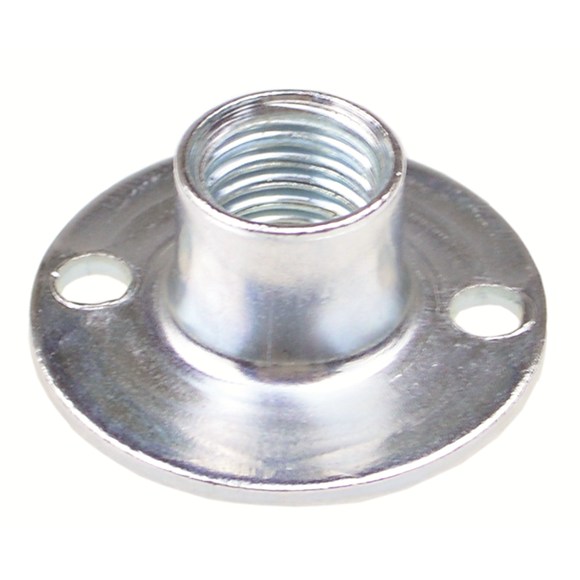 generally speaking, you'll want one with the right sized threaded portion, which was quite large

Bit the bullet (missile) and bough the Revell Phantom II F-4E kit. It's a whopper of a kit, and I'm tempted to build it. Although it has raised panel lines - so... plenty scribing. I can now "revell" in glorious X-wing engine and Fett Blaster parts.

Also (re-)discovered for myself the cross ridged greeblie for the rear end of the scope, and will be buying one. 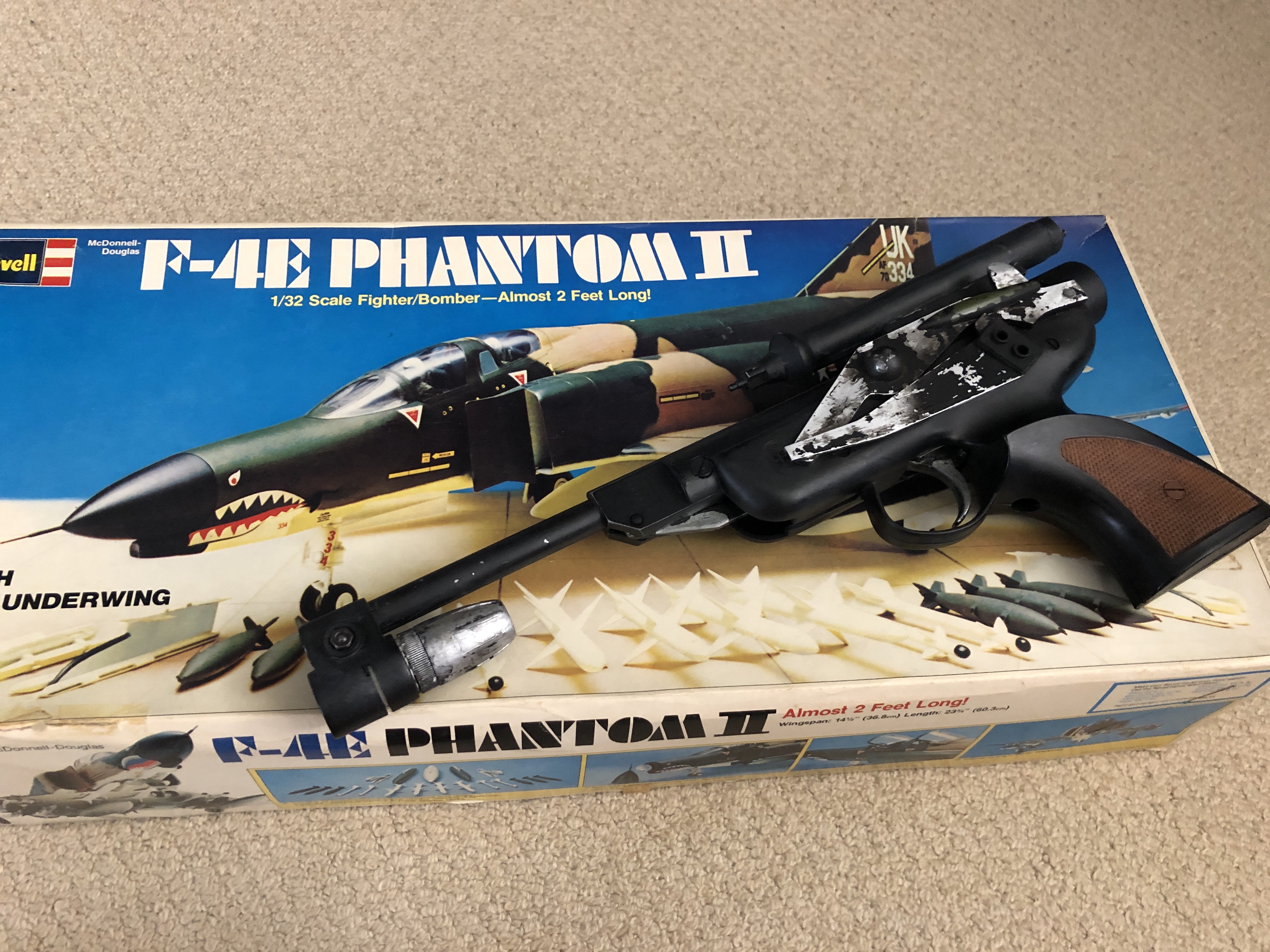 RPF PREMIUM MEMBER
Crap I didn't know there were x wing parts in there! \

RPF PREMIUM MEMBER
I forgot, for the back, I used a lathed/ground down knurled bushing from a brass antenna socket from my undergrad phsyics lab old stock parts, couldn't find a T nut large enough.

it had a brass tube, with a flexible copper plug inside, and a big knurled brass collet around the top. I ground off the knurling, drilled a hole in the rear cap and stuck it in! 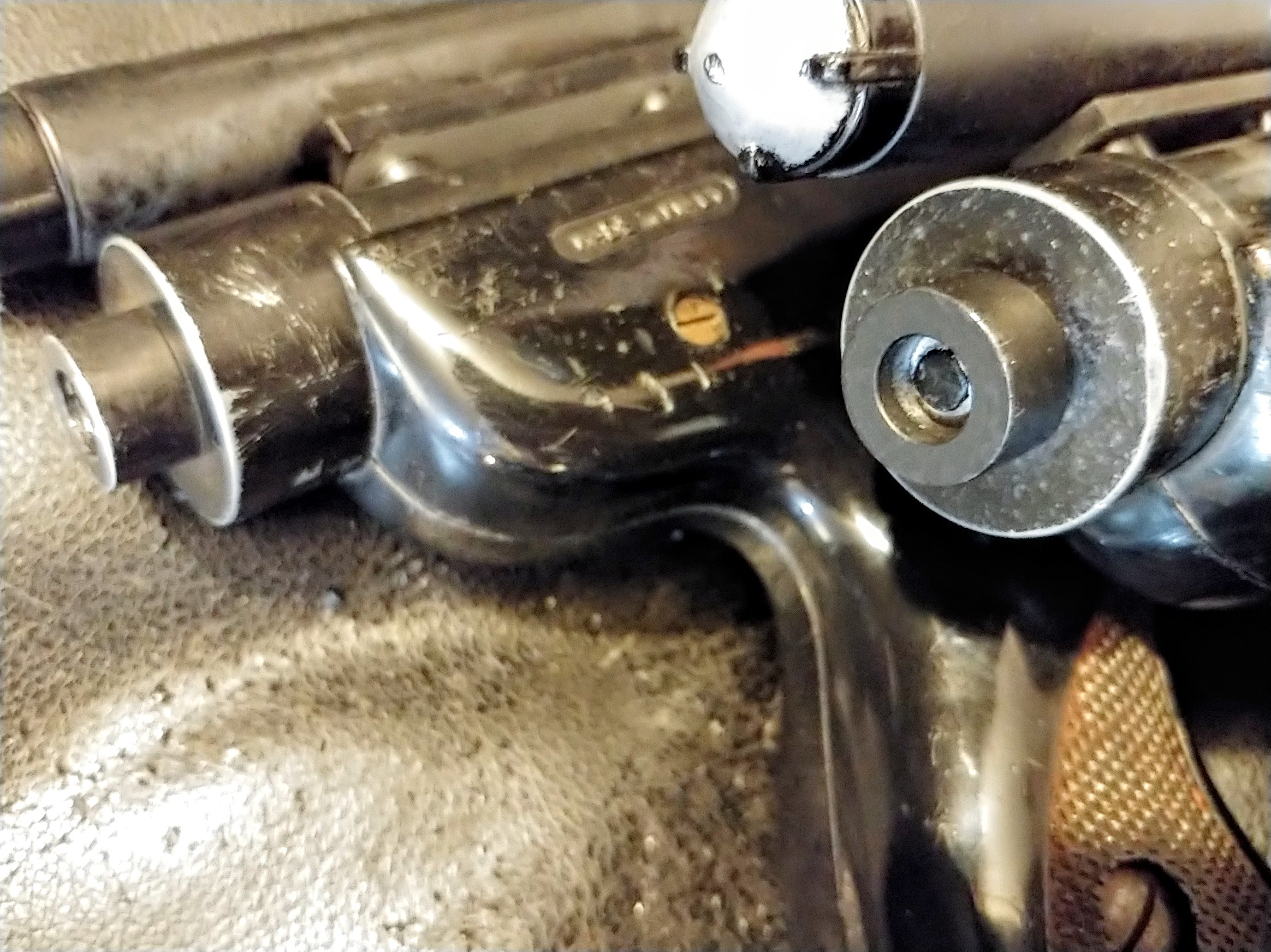 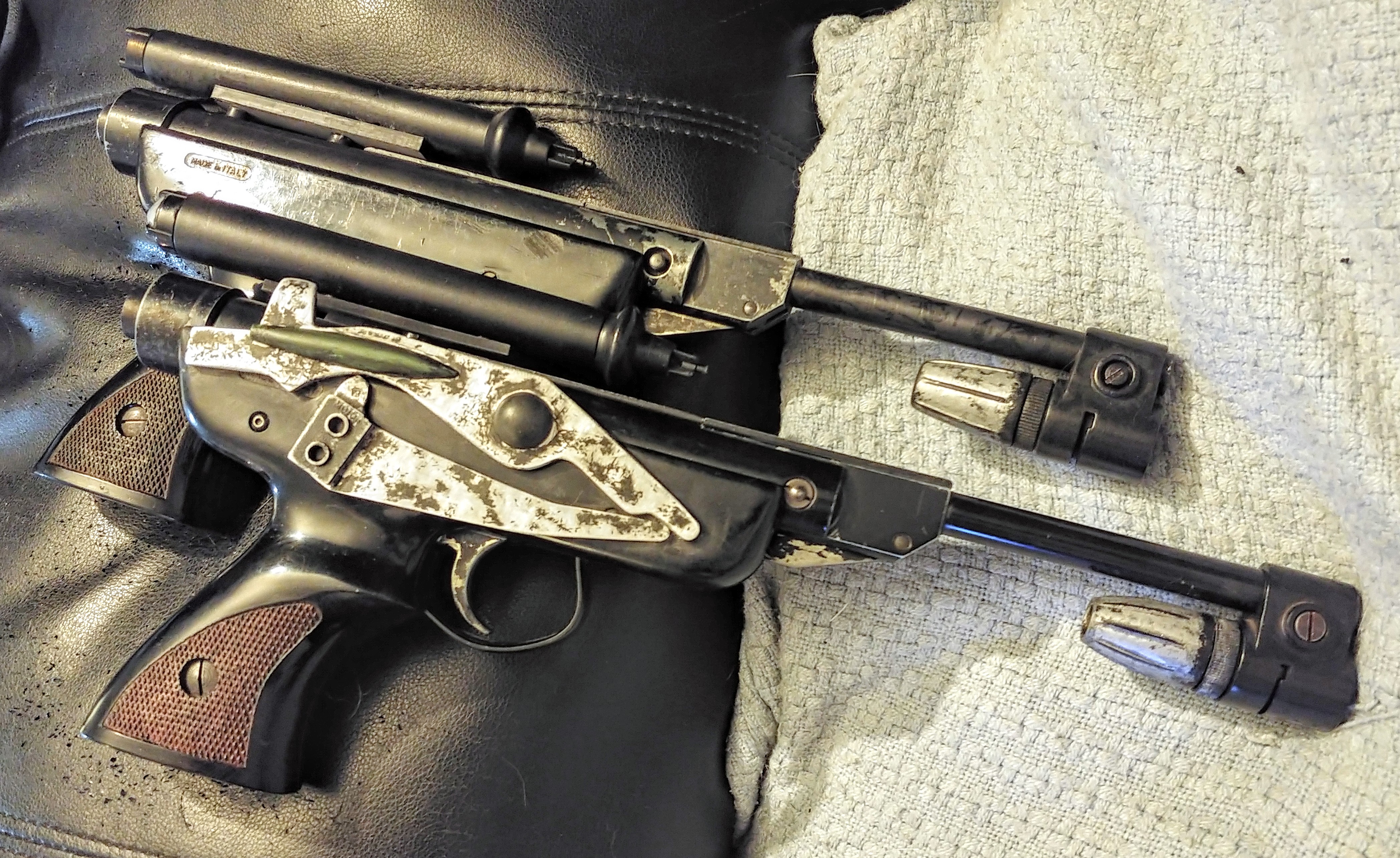 RPF PREMIUM MEMBER
Bolt coming out the back, cap simply threads on. 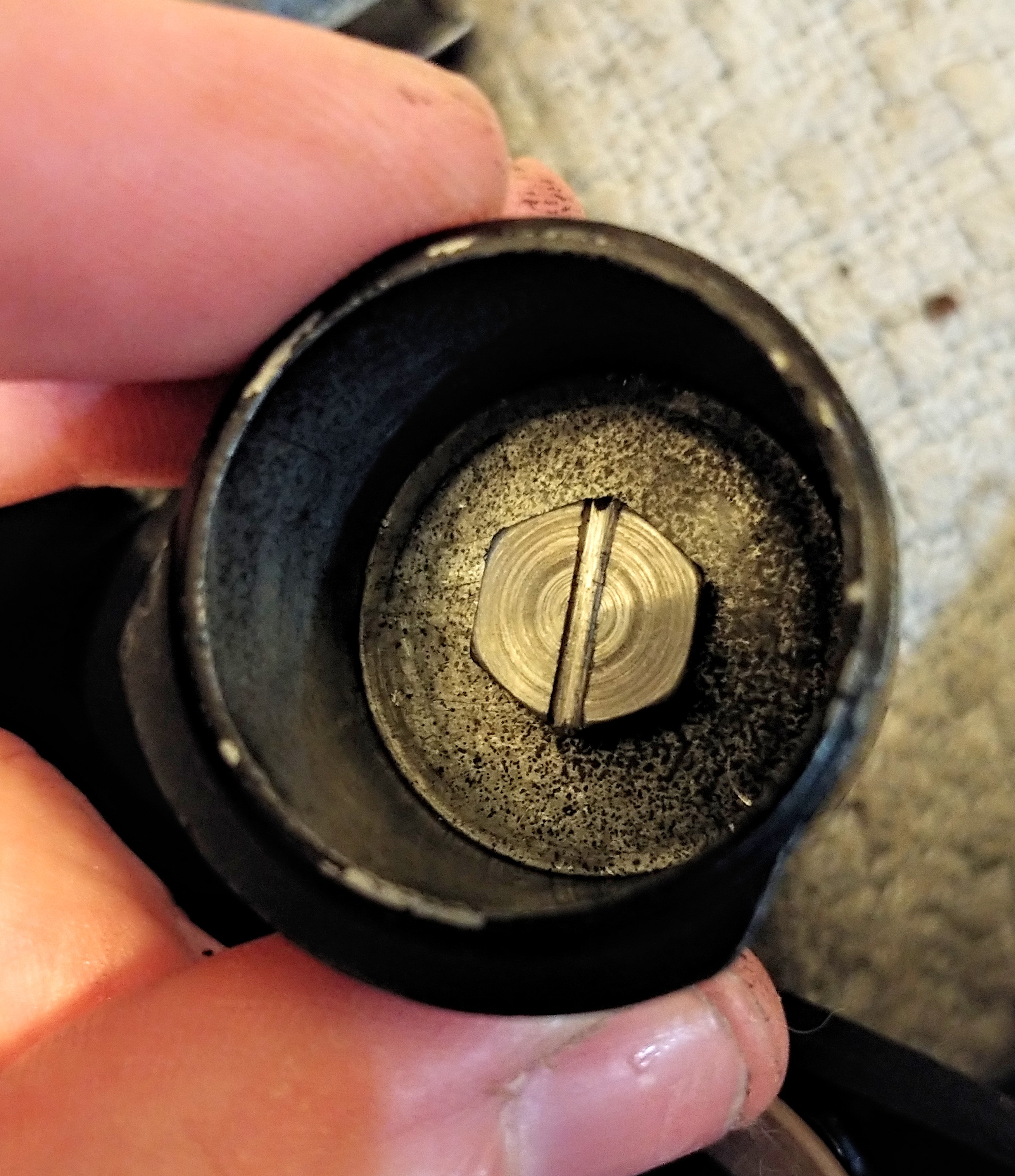 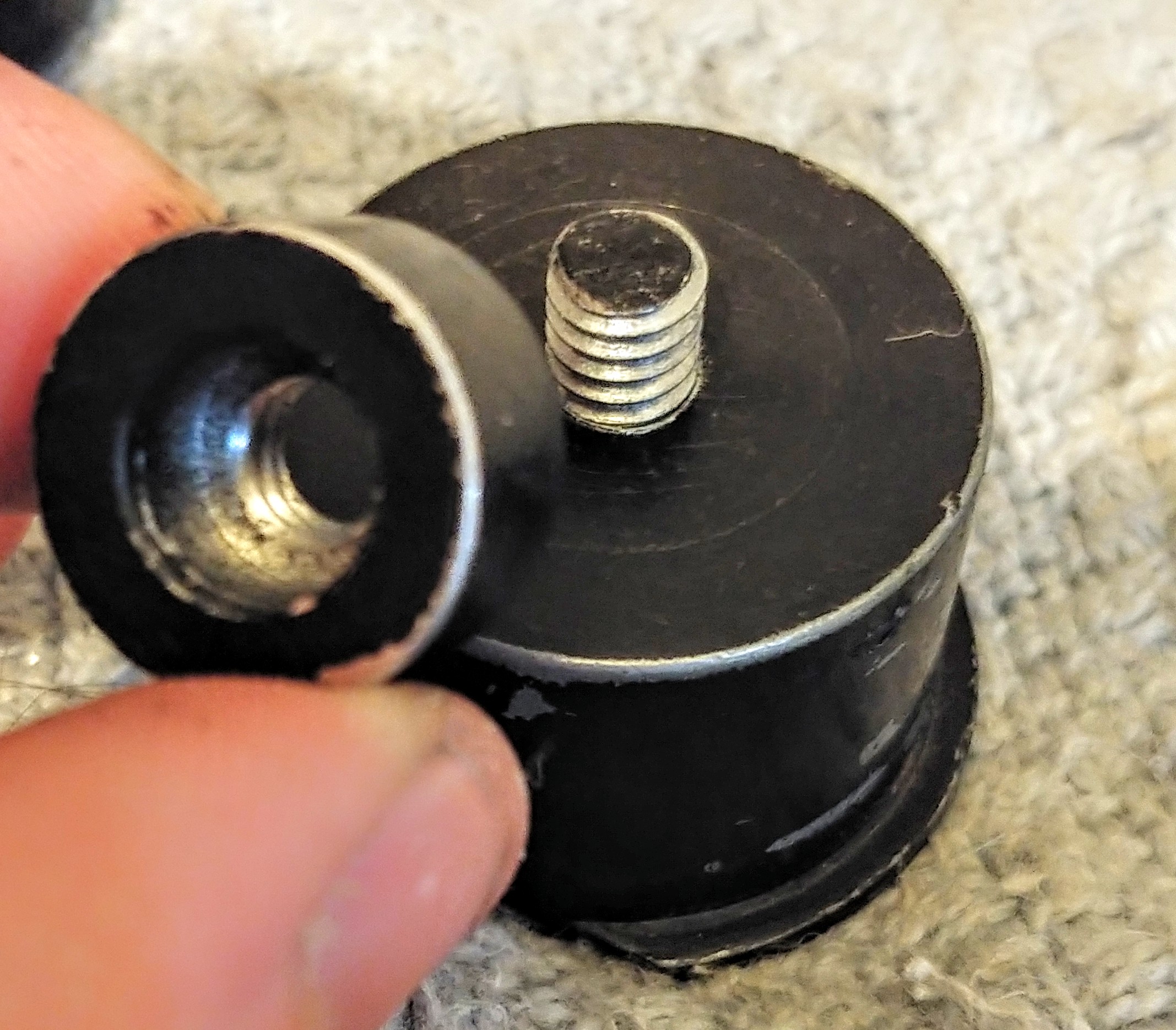 RPF PREMIUM MEMBER
you slick son of a bitch, thats some engineering right there

I've just received my "vintage bullet shaped thingies" to replace the end caps of the CE scope (which I'm going to have to saw off!!!! YIKES).

I'm going to be using stud connector nuts from China for my missing stock nut - they're a bit undersized being 12mm diameter (15mm is the right size by my estimate. Is that correct?), but I'm hoping they'll do the job. 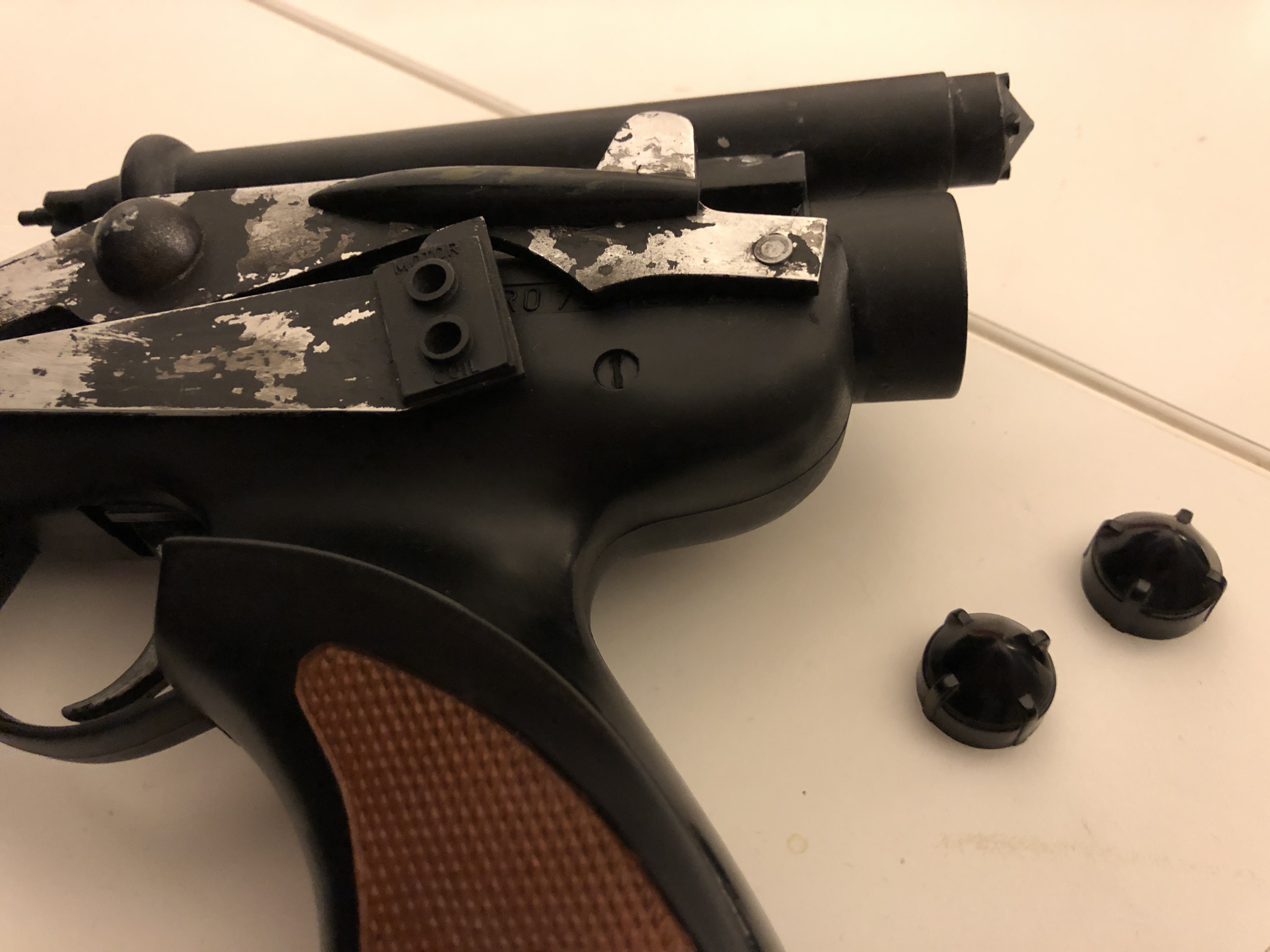 For the "cross knobs"... are there different sizes of these? As the ones I've got seem too wide in diameter for Vince's CE scope.

Dann - you have the Vince scope don't you? Your "Cross knobs" look like they fit correctly, being slightly smaller in diameter than the scope.

If so, please PM me what knobs I should be looking for LOL!!!! 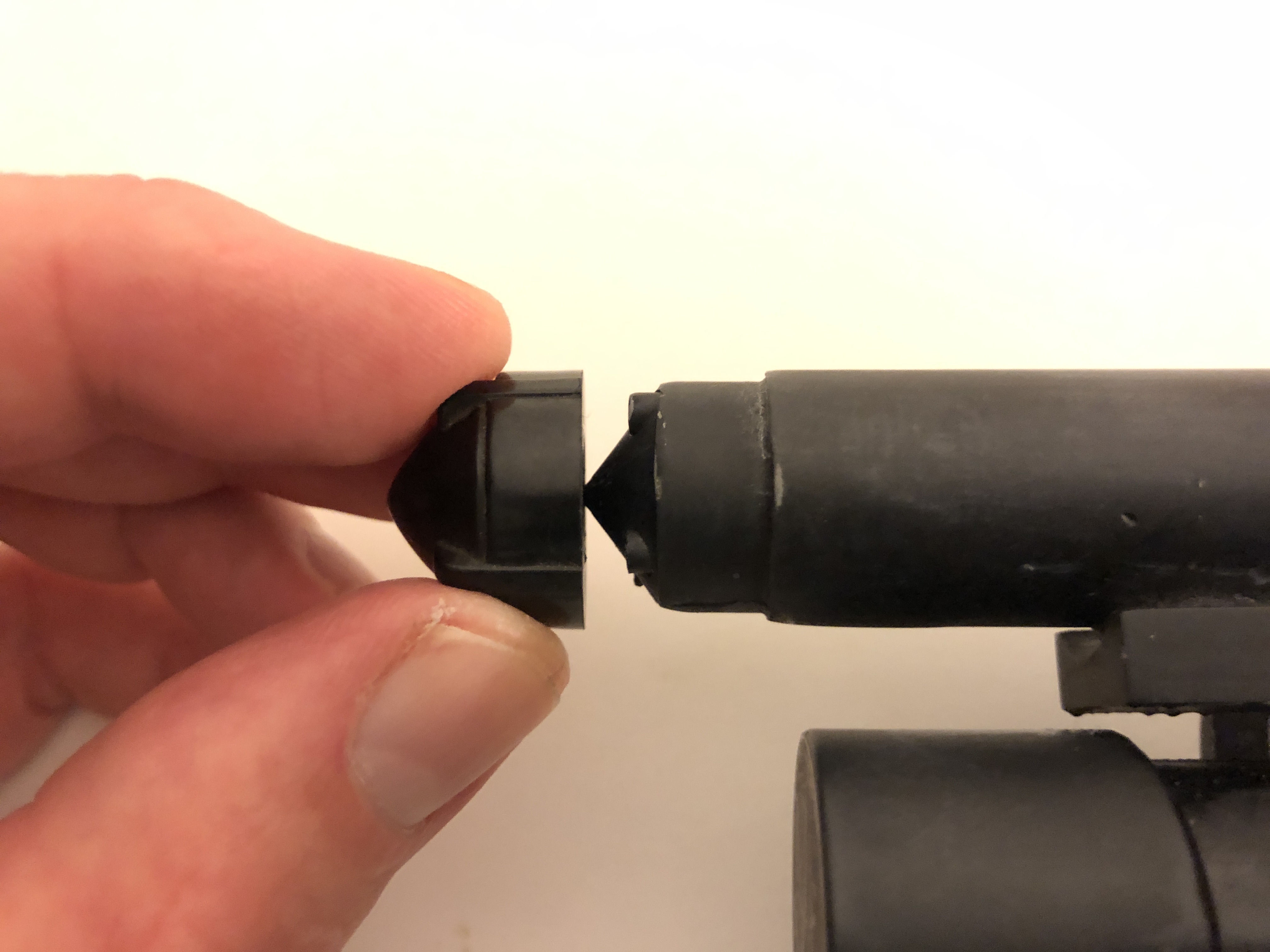 RPF PREMIUM MEMBER
So, I've actually got two of these blasters. They're currently in a state of flux, because I recently got some new parts. But yeah, one of the scopes I have is Vince's, and I get .759" for the diameter at the rear end. My real "end cap" is .754" at the base, and it has a very very slight taper (more of a curve, really), so if I measure up in the middle area of the cylindrical area, I'll get .745".

Yours looks right to my eyes, I think Vince made his "end cap" just a little on the small side, diameter-wise.

In this pic, the CE scope is on the bottom blaster, and it's got an inaccurate end cap. The top blaster has the new scope with correct end cap. 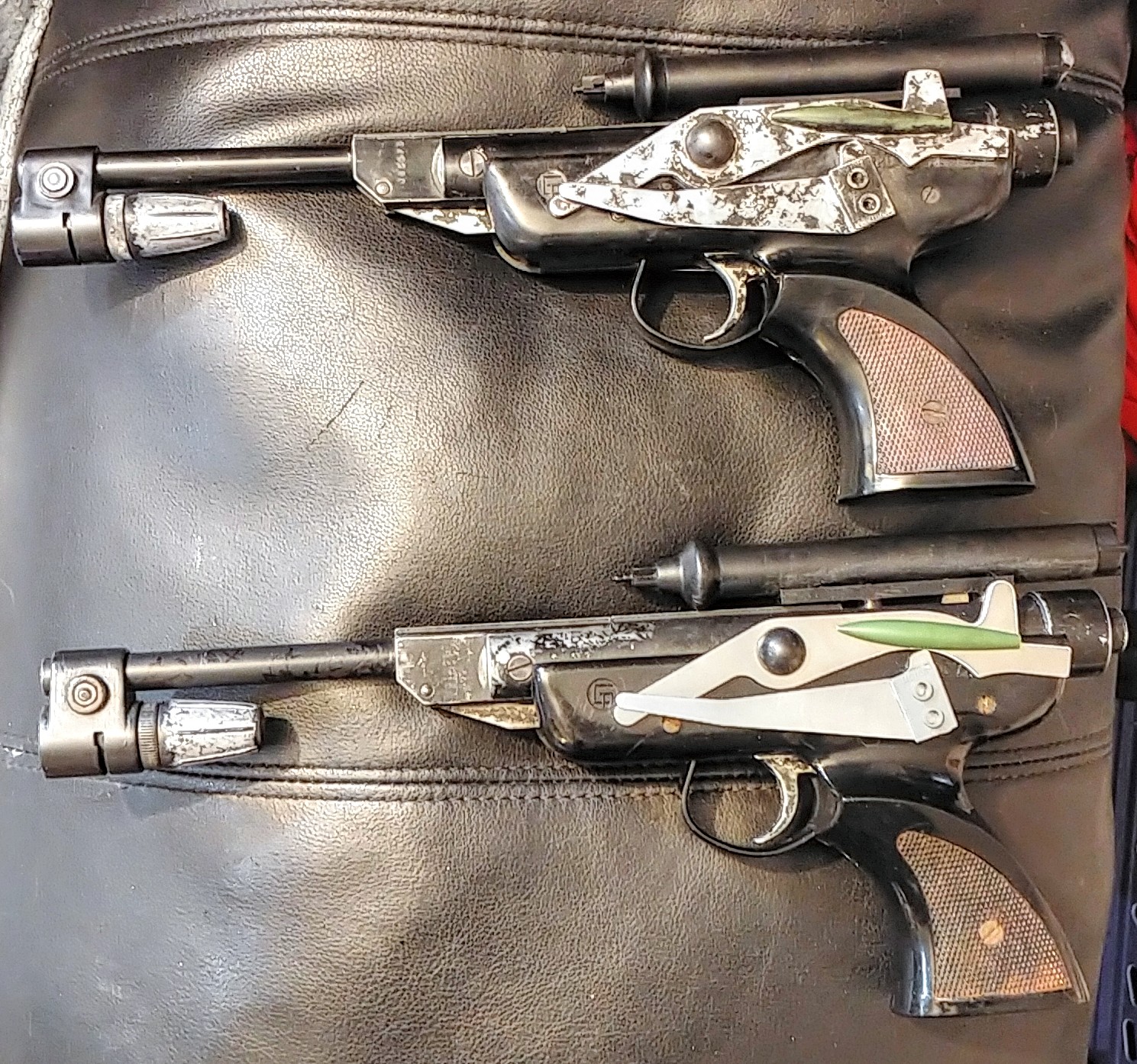 Here's another shot comparing the two. Note, I cut Vince's end cap off shortly after I received it, to install the correct one. But since then, I removed it again to install it on this new scope. So, Vince's original cap isn't in these pics, but the one I modeled as a replacement is very similar to his. I haven't gone back to change my model since getting the real end cap. Too many other projects, but I will remodel it to get as close as I can to the real one. 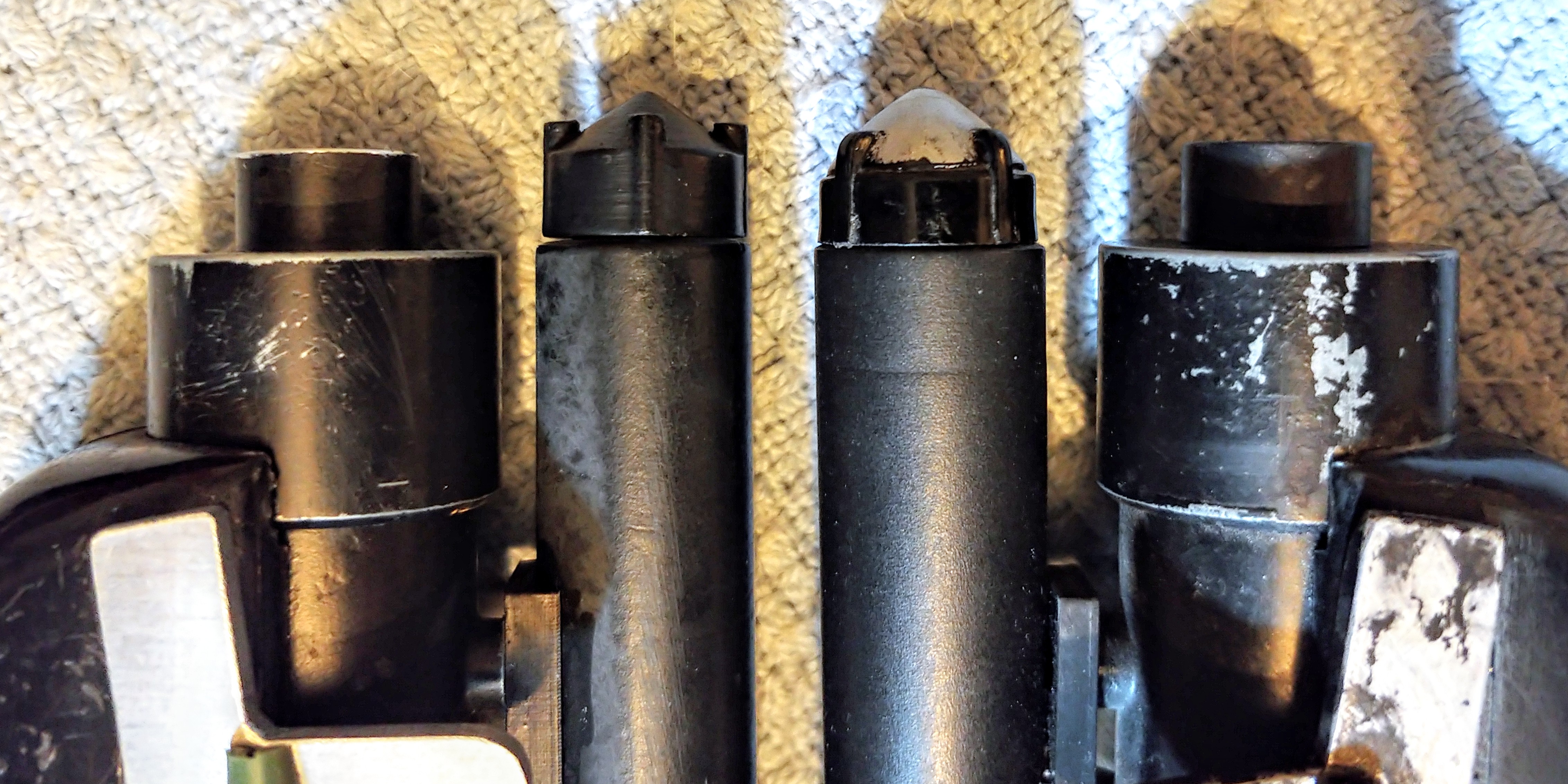 RPF PREMIUM MEMBER
Also, Graham T, your paint job on your side plates is beautiful! I keep touching mine up, making slight changes, and I'm never quite happy with it.

Originally, I tried to match the paint chips from the reference out there, and it's kind of evolved over time and become its own thing. I wish someone would do some stencils for these! Hahahaha

I mean, don't get me wrong, it's fun to do these sort of paint jobs, but it can get frustrating when things don't wanna do what you want them to do!

Dann
Thank you so much for the fantastically detailed reply and for clearing the up my confusion.

I think I'll leave the real "found part" end cap off. I might scratch build more accurate "fin" details onto the CE end cap. As much as I enjoy sourcing the original parts... I just want a good looking blaster at the end of the day!

I really appreciate you going to the trouble of measuring up and explaining your build process.

Thanks very much! That means a lot. I've gone over my side plates a couple of times too

I used Humbrol masking fluid in a fairly loose, splotchy pattern, then sprayed flat black. I "glanced" at the reference while doing this, but mostly did what felt right. After I rubbed off the masking fluid, I scraped along all the edges with sandpaper to get natural looking edge wear, and created some chips with my nails! But I found the bright metal and black paint were too contrasty, so I painted a wash of thinned black acrylic over the parts. Then I rubbed that back too with a bit with wet'n'dry.

I came to the same conclusion as you: don't try to match every chip on the real prop. It's better to figure out the original prop-maker's process and be as loose and rough with the prop as they were. You get a more authentic looking finish, rather than a "perfect replica".


Dann said:
Also, Graham T, your paint job on your side plates is beautiful! I keep touching mine up, making slight changes, and I'm never quite happy with it.
Click to expand...

Dann - when you say "new scope" on the top blaster - do you mean you fabricated your own, or did you find the original part?!!!!??!!

So, no, as far as I know the real part still hasn't been identified.