blspro said:
I've thought that sometimes. But the 'moire' is also used on the bridge, specifically at Spock's science/computer station. And it's not being used there as a sensor. So one can only say a 'moire' is of indeterminate function.
Click to expand...

Yeah true a big jumbo one too. Often not seen working.

The moire, the merrier. I hope the shoulder strap will be strong enough to support the tricorder's weight.

I'm very much looking forward to this.

RPF PREMIUM MEMBER
This is a definite day one buy! I absolutely love my Wand Phaser and Communicator. This will fulfill my childhood dream of a realistic landing party set.
B

For what it's worth, here is a picture of the Stepper Motor TWC indicates it will be using in its CAD image: 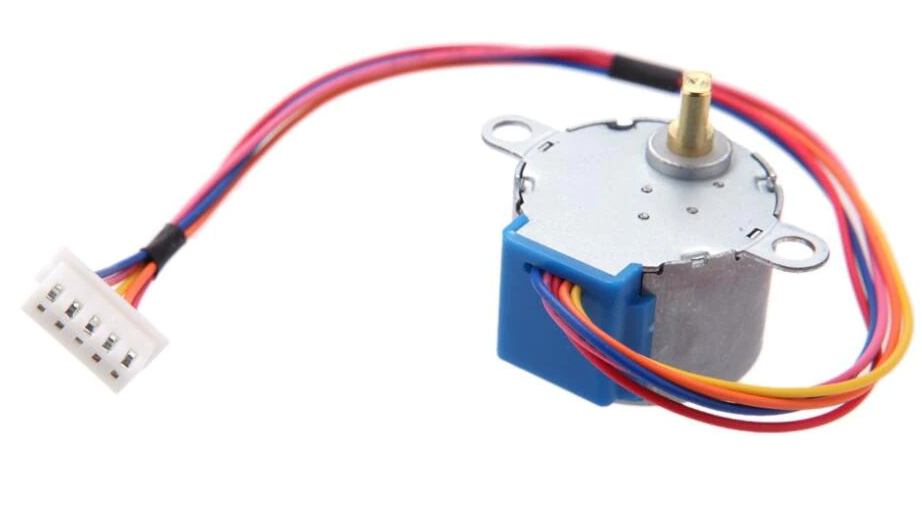 And this looks to be a custom PCB in-between the 'library' and the Moire/Motor, with what looks to be the Motor's typical ULN2003 IC controller - plus additional unknown items, including what seems to be a separate square IC as well.

One other thing to note. The picture names given to a couple of the images reveal them to be of different version numbers of the Tricorder design. The CAD I've been referencing here is listed as v1, while the dark blue circuit board I referenced in a prior post says v2 (even the PCB has that V0.2a printed on it). Of course, what sort of changes were made between v1 and v2 (how big or small etc) are impossible to determine from the images, because no two pictures of the different versions show the same part of the Tricorder. That said, where images do overlap (but do not identify a version number) I can't see any noticeable, let alone glaring, distinctions.
Last edited: Apr 11, 2021
B

TWC added the latest "Update" to their online blog. Besides the original pictures (which, on the website, are much bigger images than were included in the email), they've added this new rendering as well:

This image gives an even better look at a data disc and the 'moire' disc. And the similarities are VERY striking.

blspro said:
This image gives an even better look at a data disc and the 'moire' disc. And the similarities are VERY striking.
Click to expand...

YOU MAY REALLY BE ON TO SOMETHING!

I hope you’re right.
B

It would be a cool feature if it's true. But this is all still a very tentative conclusion based on a relatively tiny amount of information. I'm not going to be disappointed one way or the other. I'm just fascinated by all the work they are putting into producing this awesome replica for us!
Last edited: Apr 12, 2021
B

I wrote a short post over on TWC's "Update #3" page, not so obliquely asking about the data discs and the moire disc:

It was a very nice surprise to see Chris generously reply to my post:

The design of the data discs does relate emotionally to the design of the moiré bezel, but more importantly, we saw the disc obviously as the embodiment of an advanced storage medium, and as there is no canon describing what the discs look like we were able to consider something that we knew would feel nicely tactile in the hand and have the apparent function intended … that’s a function we will talk about in a subsequent post, so no spoilers here!
Click to expand...

Interestingly, his wording that they designed the data disc to intentionally "relate emotionally" to the moire disc design, and that "what the discs look like" somehow indicates "the apparent function intended" for the data discs, but that he doesn't want to talk about that function yet for fear of spoilers, certainly lends a *bit* of credence to my ideas about the data discs. It is still ambiguous enough that it could mean something entirely different, but the idea that the look of the disc is somehow an indicator of the function of the disc certainly coheres with my ideas.

Chris also provided an additional tidbit about the design. I asked:

why such a large step motor compared to the one on your Communicator? Just a ‘price vs size’ issue? Or something more?
Click to expand...

lots more information to come, but in short, you’re right, the communicator could only fit a tiny stepper motor, which presented some significant challenges in order to drive it smoothly and was very costly and actually very difficult to get hold of. Where there is room, and in the tricorder we do have a bit more room, although it has to squeeze in next to the speaker, it is much easier for us to use a larger, more cost-effective, and more robust stepper motor solution.
Click to expand...

That he says the step motor is 'squeezed in next to the speaker' seems to confirm a couple things I suspected:

1: The speaker is not in what TWC refers to as the "hood"- ie the flip top portion of the tricorder. In other words, it is not behind the little grille on the front above the nobs. 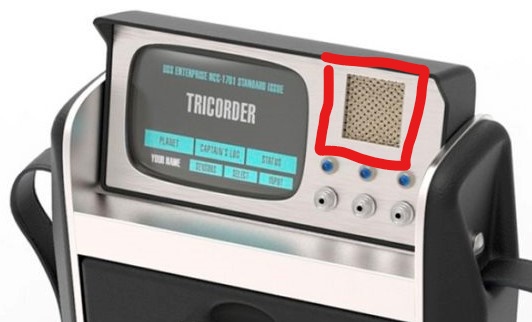 2: That the speaker is elsewhere indicates THESE items (below) are NOT tiny speakers of some sort but instead are (apparently) some of the functional 'sensors' (temp? humidity? pressure?) and - likely - a mems microphone (similar to the one behind the grille on the communicator) : 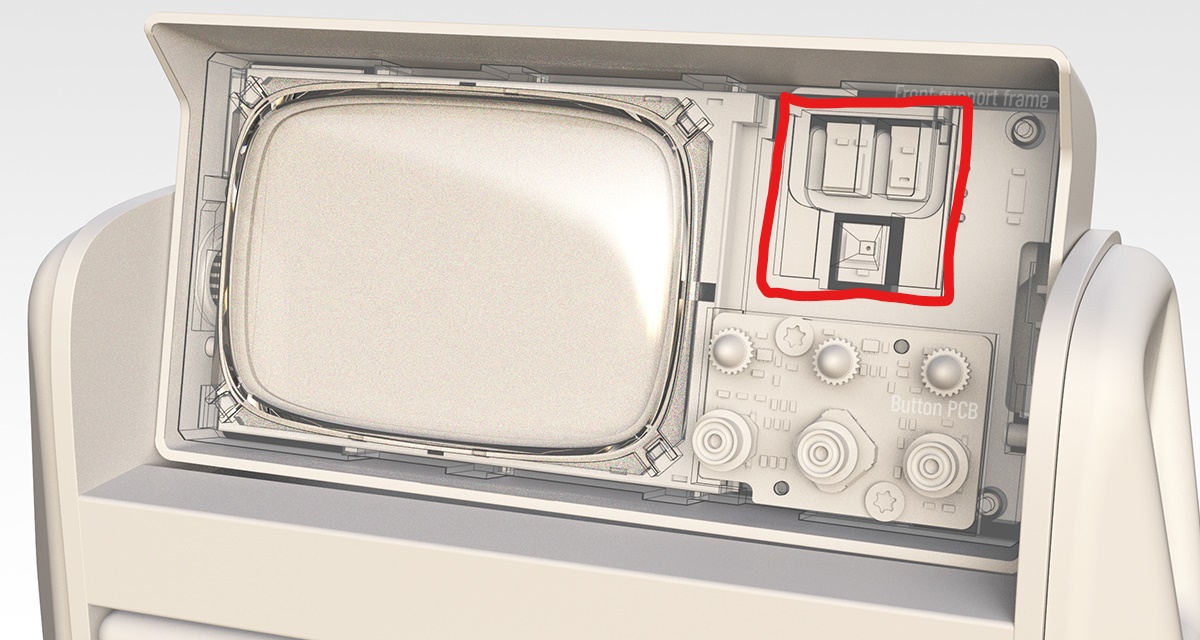 3: That the speaker is NOT in the "hood", but is in the body of the tricorder near the step motor, seems to answer a question I had about a circular design below the step motor: 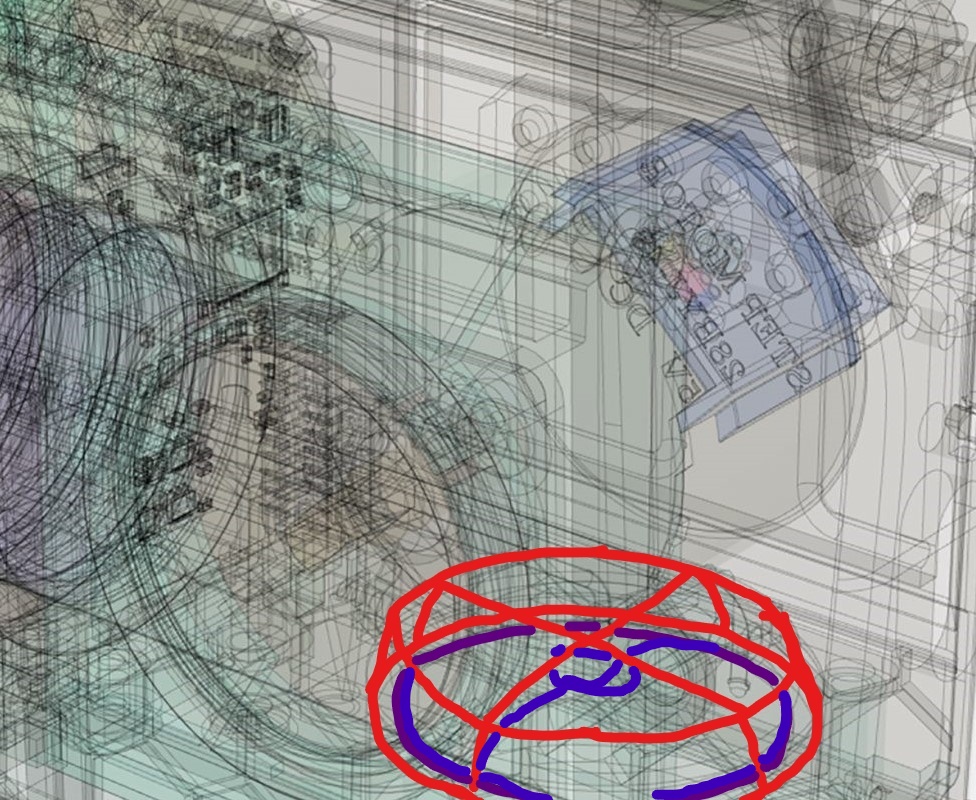 I indeed wondered if it was the location of the speaker. Unfortunately, its lack of detail, the fact it was cut off at the end of the photo, and seemingly similar circular lines further below it made me wonder if it was instead some sort of battery or the like. However, given Chris' comment, it seems it IS the speaker - which means the speaker likely will *not* be pointing forward and OUT, but either UP or DOWN (hard to tell from the CAD image itself, but given a couple of the shapes that I can make out, it SEEMS to be pointing *down*).

You’re the Sherlock Holmes of TWC, tricorders.
B

RPF PREMIUM MEMBER
Any idea on the availability date on these?
B

Originally they stated "Summer 2021" and apparently specifically mentioned a July release at one point early on. But in the first "Update" on their site, back in Mid-March of this year, someone asked them the question:

Are we still on schedule for a July release?
Click to expand...

This was their reply:

No, that is not on the cards right now. With the difficulties caused in the early part of the pandemic and the unexpected project complexity, the development is taking a few months longer than we expected. We want to get it right and we hope fans will understand that and bear with us.
Click to expand...

Hopefully the "few months longer" just means "Fall 2021" but who knows. They've not given any other indications since then.

I’m just glad it’s being made. And by a company that will deliver.

RPF PREMIUM MEMBER
Yup, I’ll wait as long as it takes.
B

We will be discussing the power supply later with a bit more detail, but you’re right, we’re gonna need a bigger battery! Expect to see a pretty standard and replaceable rechargeable battery similar to those used as part of larger battery blocks in laptops, power tools and e-bikes for example.
Click to expand...

Since the CAD wire images and the CAD renderings don't seem to show a "larger battery block" of sorts in the "hood" or the "data library" sections of the Tricorder, presumably it is located somewhere in the lower 'storage' compartment - of which we can see almost no details so far.

That said, in the CAD wire image, there seems to be some sort of cylindrical item in that 'storage' compartment. As such, it may be that the speaker (purple) is smaller than I first anticipated, and is pointing UP - with a cylindrical(?) battery (red) directly below it: 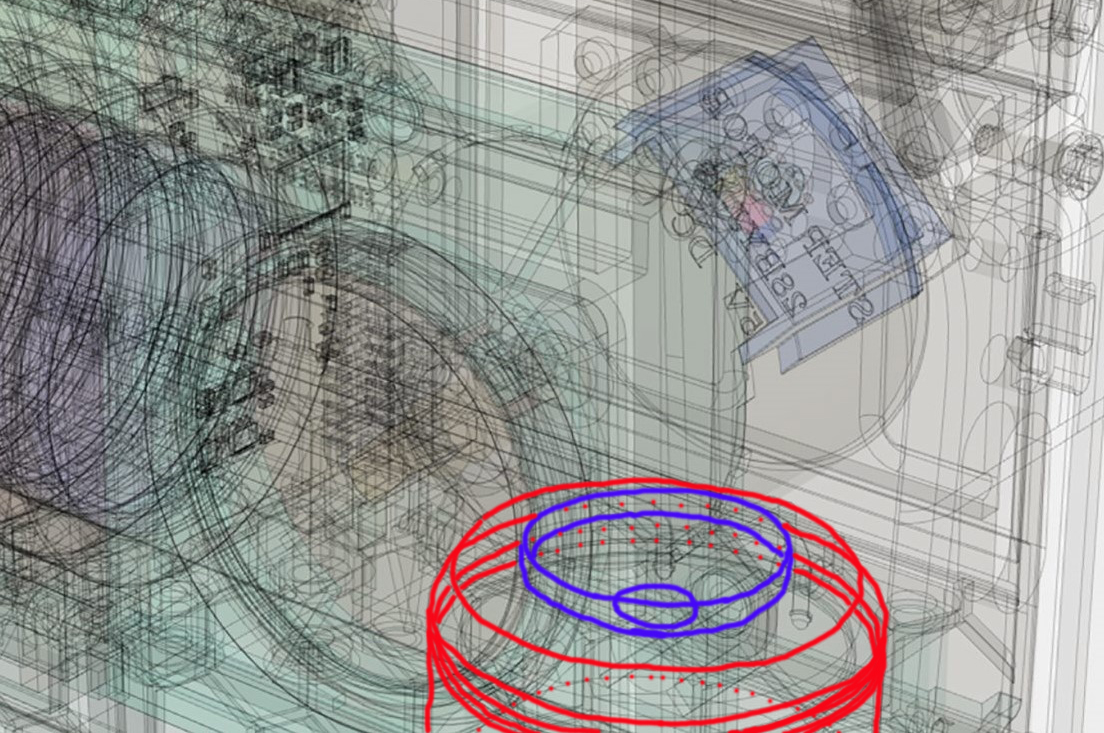 I don't know if the shape of such a battery makes space sense though. Something rectangular would seem to conserve space for other things. And there are just SO many circles drawn in all along that part of the image, it's really hard to tell what is precisely what.

Who knows - there's a very SLIM possibility the circles could even be a medical scanner: 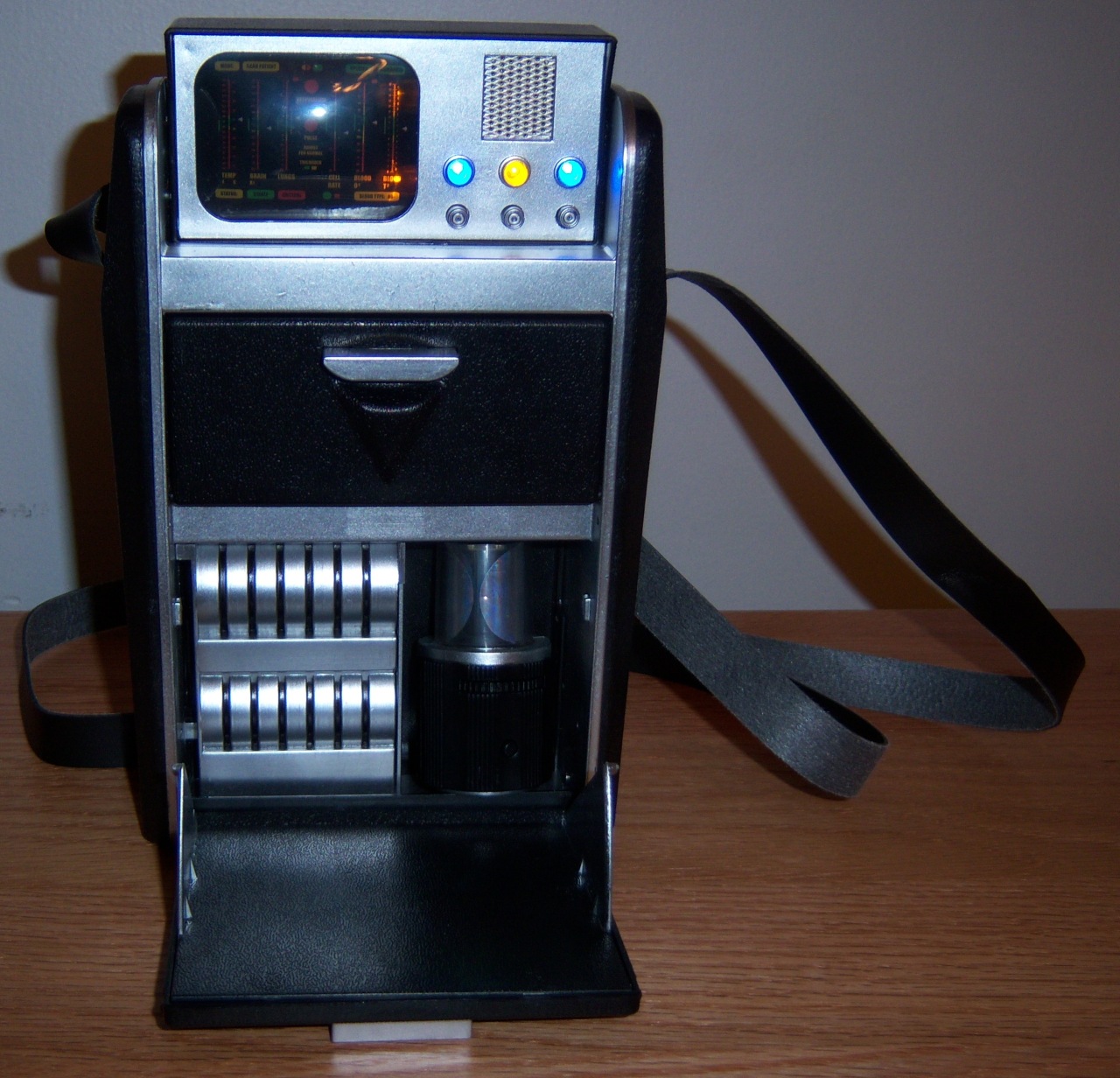 We'll just have to keep waiting for more details to be released and see.

Chris also provides a couple details about the power for the Phaser and Communicator. For those who might be interested, you can check it out over at TWC's website.
Last edited: Apr 14, 2021

Thank Christ. I hate nonreplaceable batteries in props because they sit on a shelf 90% of the time and I get like a dozen uses out of the play features before the thing won't hold a charge.
B

AnubisGuard said:
Thank Christ. I hate nonreplaceable batteries in props because they sit on a shelf 90% of the time and I get like a dozen uses out of the play features before the thing won't hold a charge.
Click to expand...

Indeed. I just hope they make it easier *to* replace than the 'replaceable' battery in the Communicator.
A

AnubisGuard said:
Thank Christ. I hate nonreplaceable batteries in props because they sit on a shelf 90% of the time and I get like a dozen uses out of the play features before the thing won't hold a charge.
Click to expand...

I agree. I bought two communicators, followed the charging recommendations, and found both still died within 12-18 months. Great products in theory but I just get sad every time I run across them in a drawer.

I subscribed to the tricorder e-mails solely to see what the battery plan was. I think that alone will determine whether I buy three or zero.

Looking forward to this and lots of information coming as well great ideas by fellow members here. Agreed battery and yep more than likely it will sit on a shelf or display case 90% of the time.