Apollo said:
That would be his faithful, “Man servant” Cato

I watch just those scenes in ALL the Panther movies once a year
Click to expand...

Ah, yes. Thanks for the clarification.
Those were the best. The slowed down scenes where they were flying through the air or getting pummeled were that era's Matrix fight scenes.

The next step is to finalize the enclosure of the Laser Gun.
First, it needs a foot for mounting on the center piece.

The skin of the Laser Gun is made from cardboard, the one they use e.g. at Sam's Club for separating layers of kitchen towels or toilet paper.

To indicate the direction in which the Laser Gun fires, I am adding two details.
A 3/8" wooden dowel with a few round pieces glued to the front.

A little cone-shaped area is added to the front. This roughly resembles what is used in the movie.

To stick to the cartoon-ish theme of the play, the Laser Gun is then painted dark blue and pink.

To add a little detail, two "super-size" Ferrero Rocher balls are screwed to the top at the front side.

Just a smaller update: I finished the base.
To increase the size of the Doomsday Machine, and to add a little weight to the bottom, I added a rectangle of 2"x4" pieces to the bottom.

Then I cut the trapezoids to cover the sides from corrugated cardboard,

and glued them to the sides, leaving the two back sides open, for access and handling.

This finishes the work on the whole mechanical structure. The whole unit is now about 7 ft tall - really impressive!
Now I can focus on the electronics and the Arduino and Raspberry Pi programming.

Now that the body is done, I'm starting with the lights - those on the Laser Gun. I am using a 2835 LED Strip (non-waterproof, cold white) with 120 LEDs per meter. This are twice as many as compared to other LED strips. I glue six strips (20" each) to the barrel of the gun, and one to the front rod. I'm glad that the glue sticks really well to the cardboard. Only for the front rod, I am adding a few cable ties.

Then comes the exciting moment when I turn them on for the first time. YES!!! The LED strips turn out to be REALLY bright. This will look great in the theater! I can't wait for my Arduino circuit when I will be able to animate the lights, so they "move" from the back to the front - and then as the laser fires the LEDs on the front rod will be flickering fast.
[more details are on my blog]

Assembling the circuit board is always the least fun. When building the enclosure, you can see progress in every step. During the Arduino-programming, you see e.g. lights flicker etc. But building the circuit board is just a long process without much reward. It's important to spend sufficient time for optimizing the layout before you start soldering - it really pays off. Now, I think I got this finished. When checking the connections, I noticed that one is missing - the rest seems good. Here is the result.

Later today, I will connect this to the power supply, the LED strips, and the 8mm LEDs and run a simple test program on the Arduino, checking if all lights turn on. And, as usual: I really hope that everything works - I really dislike searching for errors on circuit boards.

I soldered the wires to the LED boards and screwed the boards into the Center Piece.

Then I had an idea for a little "Easter Egg" add on. As a part of my set of Back-to-the-Future props, I had built the Analog Gauges that sit in the glove compartment of the DeLorean. I added those to the top of the center piece.

At this point, I brought everything to the theater, so I could screw the Laser Gun to the Center piece and connect the wires from the LED strips to the circuit board. It's a big mess, but I numbered all cables so, hopefully, I will be able to trace any potential errors.

The circuit is build around a Arduino Pro Mini (168, 16MHz), and two shift registers 74HC595. I am using ten transistors 2N2222 for the 0.5W LEDs and MOSFETs IRLB8721 for the LED strips. Everything is powered by a 12V/28W supply (which they sell for LED strips) and a LM7805 to get 5V for the Arduino and the 0.5W LEDs. On the software side, I am using the "shiftPWM" library. This allows to set the brightness for the individual LEDs/LED strips through the two shift registers. Even with the highest resolution (255 brightness values) this works very well. With a little test code, I am checking that all LEDs and LED strips are working, and that I am able to read the push buttons and the joystick.

Everything works, and I'm putting the Center piece plus Laser Gun on top of the Base, and move everything onto the stage. 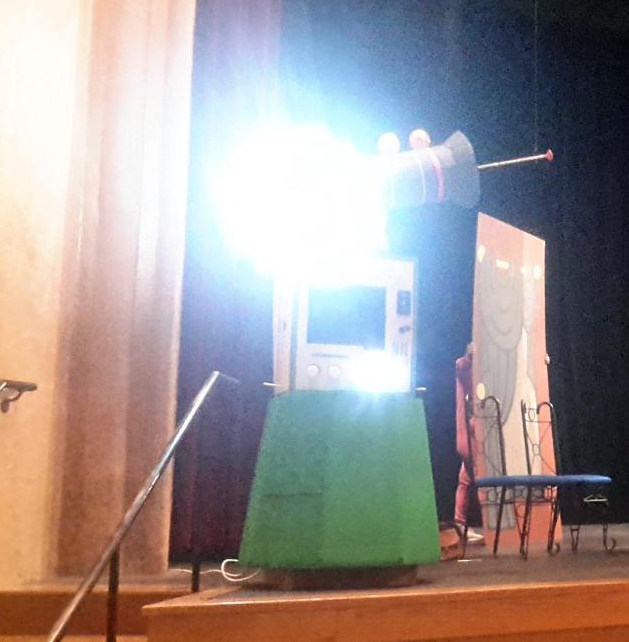 This very first image of the whole unit on stage is very poor. It will not be easy to capture these very bright lights in the dark theater environment.
The first show will be Thursday night, and I'm sure I will make it. But there is still some work that needs to be done on the programming of the final light patterns, and the set-up of the RaspberryPi that will loop some "SciFi computer screen" videos on the monitor.

The "Pink Panther" play starts tomorrow, and today is the final dress rehearsal. And I just finished everything on time (yeah!). 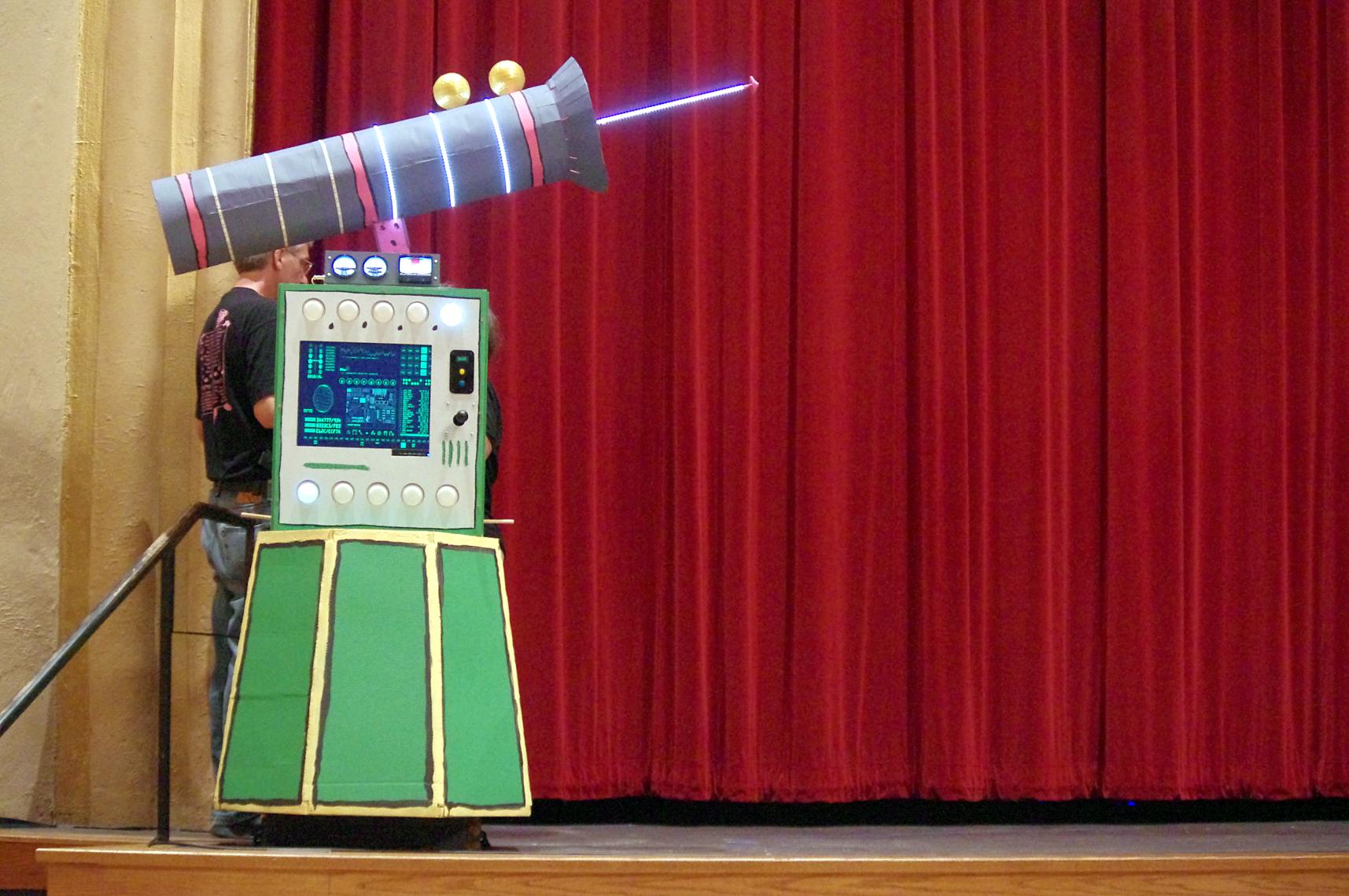 Further details are posted on my blog.
I hope that soon I can post a video of the machine.

How fun! How cool! It's a shame though you had to cover up that cool ribbing of the gun.

RPF PREMIUM MEMBER
...and killed him in a rit of fealous jage.

I so love the Panther movies.

Strikes was the first I saw in a theater. I think I got the hiccups watching Clouseau trying to ‘infiltrate’ the castle.

So, how does the play deal with the ray disintegrating the ex-commissioner?

dbuck said:
...and killed him in a rit of fealous jage.

I so love the Panther movies.

Strikes was the first I saw in a theater. I think I got the hiccups watching Clouseau trying to ‘infiltrate’ the castle.

So, how does the play deal with the ray disintegrating the ex-commissioner?
Click to expand...

In the play, Dreyfus is not disintegrated. At the end, Dr. Fassbender sets the Doomsday Machine into self-destruct mode. At this point Clouseau joins Dreyfus, telling him he would stay with him and they both would enter eternity together. Dreyfus is really worried at that thought and runs ways.
You can find the full details on pages 81, 82 in the pdf file of the complete play.
Honestly, I'm not really sure what to think about this ending ... but, by now, I have attended so many rehearsals that I simply got used to it
The bigger point is that the play is not able to capture the true spirit of Inspector Clouseau. This is not a fault of the actors, but due to the unique personality of Peter Sellers. Just recently, I watched the 1968 movie "Inspector Clouseau" with Alan Arkin as Clouseau. It's a very strange production. I can not say that Alan Arkin was bad. And I can not say that the slapstick was untypical for Clouseau. But it just did not work. I'm sure that Peter Sellers would have made it work. This is what you have to have in mind when watching the play: Do not compare it to the Blake Edwards / Peter Sellers movies.
Last edited: Oct 10, 2019

I’m sure the play will go over fine!!

Love what you did with the “Machine”

Tonight was the first show. It went really well. The lights on the machine worked very well with theater lights. In the next days, I will post video clips of the machine in action on stage.

RPF PREMIUM MEMBER
Glad it went well. A prop like this has to be reliably functional. Good job.

Jintosh said:
Glad it went well. A prop like this has to be reliably functional. Good job.
Click to expand...

Thank you.
Yes: definitely reliable! This actually required a last-minute software update. Whenever Dreyfus was moving the joystick upward, he just slapped it upward - which looked good. However, as a result, in one of two cases, the joystick bounced back hitting the downward position - so, instead of turning it into "joystick up: mode 4", the machine was turned into "joystick down: mode 5". This would have screwed up the LED patterns.
Just a few hours before the show I modified the readout code for the joystick: Whenever it senses that one of the contacts is closed, for the next half- second, it ignores any further events (like de-bouncing code for push buttons). That made it foolproof & reliable.

Markus said:
Thank you.
Yes: definitely reliable! This actually required a last-minute software update. Whenever Dreyfus was moving the joystick upward, he just slapped it upward - which looked good. However, as a result, in one of two cases, the joystick bounced back hitting the downward position - so, instead of turning it into "joystick up: mode 4", the machine was turned into "joystick down: mode 5". This would have screwed up the LED patterns.
Just a few hours before the show I modified the readout code for the joystick: Whenever it senses that one of the contacts is closed, for the next half- second, it ignores any further events (like de-bouncing code for push buttons). That made it foolproof & reliable.
Click to expand...

Fast thinking, and a nice fix.

The good news is that the shows are finished. They were really successful due to great acting, and a bit also due to my Doomsday Machine for which I got many nice compliments.
The sad news is that right after the final show, the Doomsday Machine was disassembled and continues to live in my memories (plus photos, videos, and my blog). While the videos may take a little time, let me show you here the photo sequence of the Doomsday Machine erasing the UN building. It turned out to be non-trivial to synchronize the video of the UN building (started by the sound guy) with the action on stage (where the actors start the fire-the-laser sequence on the Doomsday Machine). But in all four shows the results turned out to be pretty good. 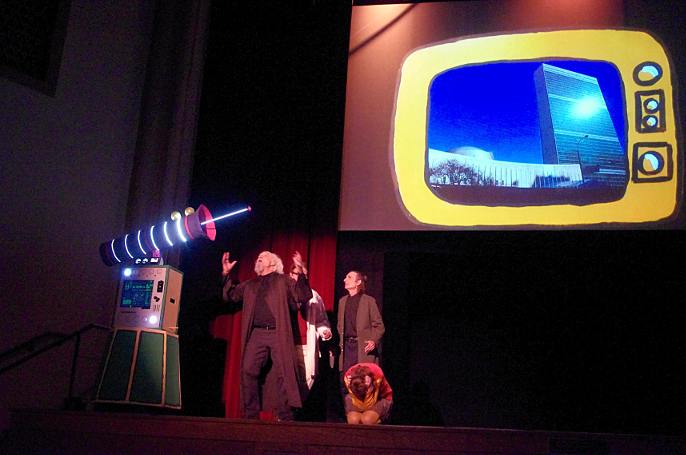 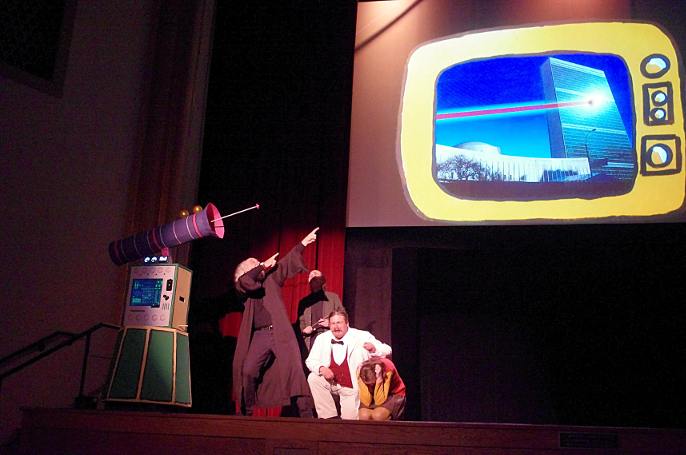 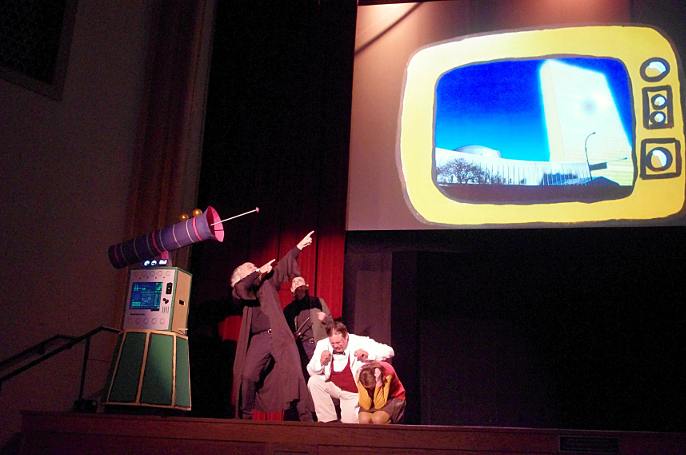 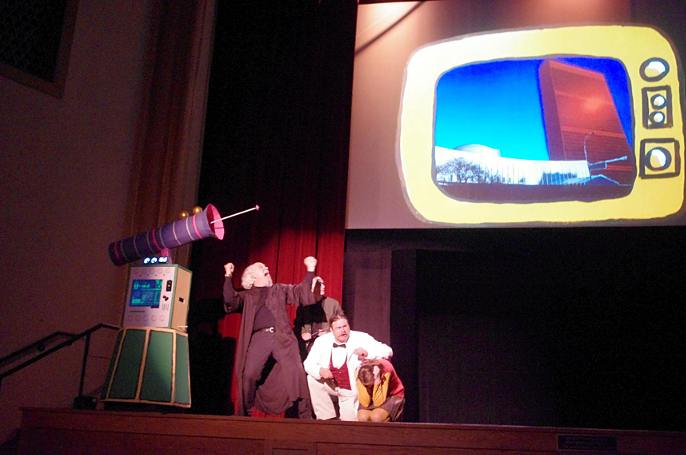 You see Dreyfus (left) celebrating how the UN building vanishes while Dr. Fassbender (in white) is holding his daughter, Margot. In the video that is shown on the big screen you see how the laser hits the building which changes its colors before it disappears.