I know there are a lot of super-talented (pun intended) artists on this forum, and I was wondering if any of you would be interested in helping with a project I've wanted to do for years.

The Tim Burton directed, Nicholas Cage starring Superman film, titled "Superman Lives" had a teaser poster that was released by Warner Bros. at Toyfare in 1997 -- and only ten were made. Most were destroyed and I believe only one individual has the only surviving one, but, rightfully so, wants a fortune for it.

Would anyone be interested in helping re-create this poster? I have a couple of images, one of which is relatively high in quality, that we could use as a guide.

P.S. I believe "mverta" may have had something to do with the creation of the new logo for Superman Returns. Maybe he could help/shed light on the situation?

P.P.S. Not entirely sure this' where this should go, so Mods, please don't hesitate to move it.

RPF PREMIUM MEMBER
Looks like someone has come to the rescue :love

Nice image - I had never seen that poster before. :thumbsup
While I really dislike the Superman Symbol on it, it is still cool to see what they were thinking at the time.

Burtons Superman couldn't even fly, he needed a flying vehicle go get around.

He used an exo-suit to give him powers....weird!

Theres a lot of Tim Burton films I enjoy such as

But man... the guy needs to stay away from Superman. What I've heard of this film ....was bad.

The script for Superman Lives was written by Kevin Smith, and it is an interesting read... although it would have needed a lot of work to make it a decent movie. They insisted on giving Brainiac a cutesy little VINCENT like robot.

Anyone who wants to read it, pm me and I'll e-mail you a copy.

I would have rather seen this one made than Superman Returns, ha ha. Maybe they could have kept the giant spider from Wild Wild West...ugghh.
J

It wasn't a giant spider... it was a Tarakian snare beast! 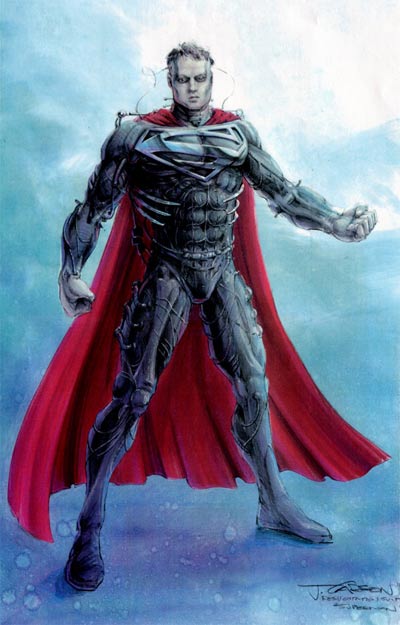 WTF is that? It looks like Frankenstein's monster. Complete with bolts in the neck.

I'm glad Jon Peters/Tim Burton didn't get their chance to make their version of Superman. The stuff Kevin Smith was saying in An Evening with Kevin Smith was pretty scary stuff :confused

RPF PREMIUM MEMBER
A Tim Burton Superman would have sucked- Pale Skin- Ti Burton Hair- Zipper suites in black leather-give me a break--I disliked Singer's somewhat "flamboyant" man of steel as well- but it was better than that scary artist's rendition above...

Pauleysolo said:
A Tim Burton Superman would have sucked- Pale Skin- Ti Burton Hair- Zipper suites in black leather-give me a break--I disliked Singer's somewhat "flamboyant" man of steel as well- but it was better than that scary artist's rendition above...
Click to expand...

Totally Agree! After the 2nd Batman, and after re watching the original TB Batman, his take on SM would have blown dog!!

Jaruemalak said:
The script for Superman Lives was written by Kevin Smith, and it is an interesting read... although it would have needed a lot of work to make it a decent movie. They insisted on giving Brainiac a cutesy little VINCENT like robot.

Anyone who wants to read it, pm me and I'll e-mail you a copy.
Click to expand...

That's actually a huge misconception. Smith was hired by John Peters before Burton signed on. The first thing that Burton did on the film was trash Smith's script. SEVERAL writers worked with Burton... Wesley Strick and Dan Gilroy are the only two that are coming to mind, though. I have a few hard copies of script drafts from the Burton/Supes era.

I was a HUGE fan of Burton's Batman. The thought of a Burton-helmed Superman movie struck my curiosity... though I agree, it would have been a trainwreck. Still, it's an interesting thing to read about.

Looks like a Superman died, went hell, made a deal with the devil and came back as HellSpawn Superman. You can see how Super-hero design, at the time, influenced this drawing.

Yes, Smith/Peters script was an abortion. Burton dismissed it and started over, but the idea of having Nick Cage as Superman didn't promise much hope for a good film, neither:

Hi mercureyx, yes I want to try reconstruct this poster, besides I'm already trying, but I can see in the 2 pics by you that are something wrong. The pic with the 2 posters, shows the sup lives with some parts totally diferent, and is not only a question of light but seems some kind of 3d element that suffers with the light. How we discover which is the original? Yes send to me all your pics, please. In wikipedia I have found an article about superman films that says the name of the artist of this poster.

Sorry for resurrecting this thread from the dead (pun intended), but anyone interested in helping out with this? Getting the itch to try again...